Annotating for Hate Speech: The MaNeCo Corpus and Some Input from Critical Discourse Analysis

This paper presents a novel scheme for the annotation of hate speech in corpora of Web 2.0 commentary. The proposed scheme is motivated by the critical analysis of posts made in reaction to news reports on the Mediterranean migration crisis and LGBTIQ+ matters in Malta, which was conducted under the auspices of the EU-funded C.O.N.T.A.C.T. project. Based on the realization that hate speech is not a clear-cut category to begin with, appears to belong to a continuum of discriminatory discourse and is often realized through the use of indirect linguistic means, it is argued that annotation schemes for its detection should refrain from directly including the label 'hate speech,' as different annotators might have different thresholds as to what constitutes hate speech and what not. In view of this, we suggest a multi-layer annotation scheme, which is pilot-tested against a binary +/- hate speech classification and appears to yield higher inter-annotator agreement. Motivating the postulation of our scheme, we then present the MaNeCo corpus on which it will eventually be used; a substantial corpus of on-line newspaper comments spanning 10 years.


* 10 pages, 1 table. Appears in Proceedings of the 12th edition of the Language Resources and Evaluation Conference (LREC'20)

This work addresses the challenge of hate speech detection in Internet memes, and attempts using visual information to automatically detect hate speech, unlike any previous work of our knowledge. Memes are pixel-based multimedia documents that contain photos or illustrations together with phrases which, when combined, usually adopt a funny meaning. However, hate memes are also used to spread hate through social networks, so their automatic detection would help reduce their harmful societal impact. Our results indicate that the model can learn to detect some of the memes, but that the task is far from being solved with this simple architecture. While previous work focuses on linguistic hate speech, our experiments indicate how the visual modality can be much more informative for hate speech detection than the linguistic one in memes. In our experiments, we built a dataset of 5,020 memes to train and evaluate a multi-layer perceptron over the visual and language representations, whether independently or fused. The source code and mode and models are available https://github.com/imatge-upc/hate-speech-detection . 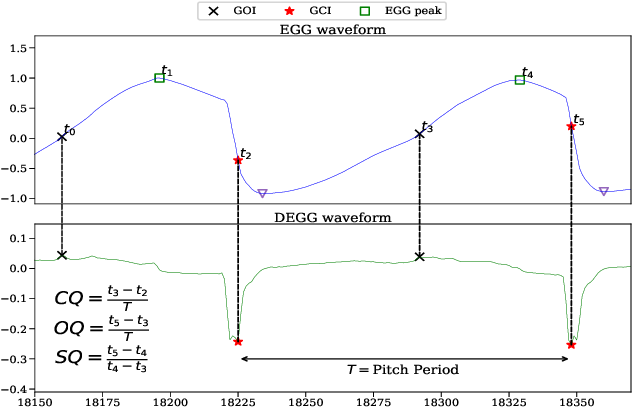 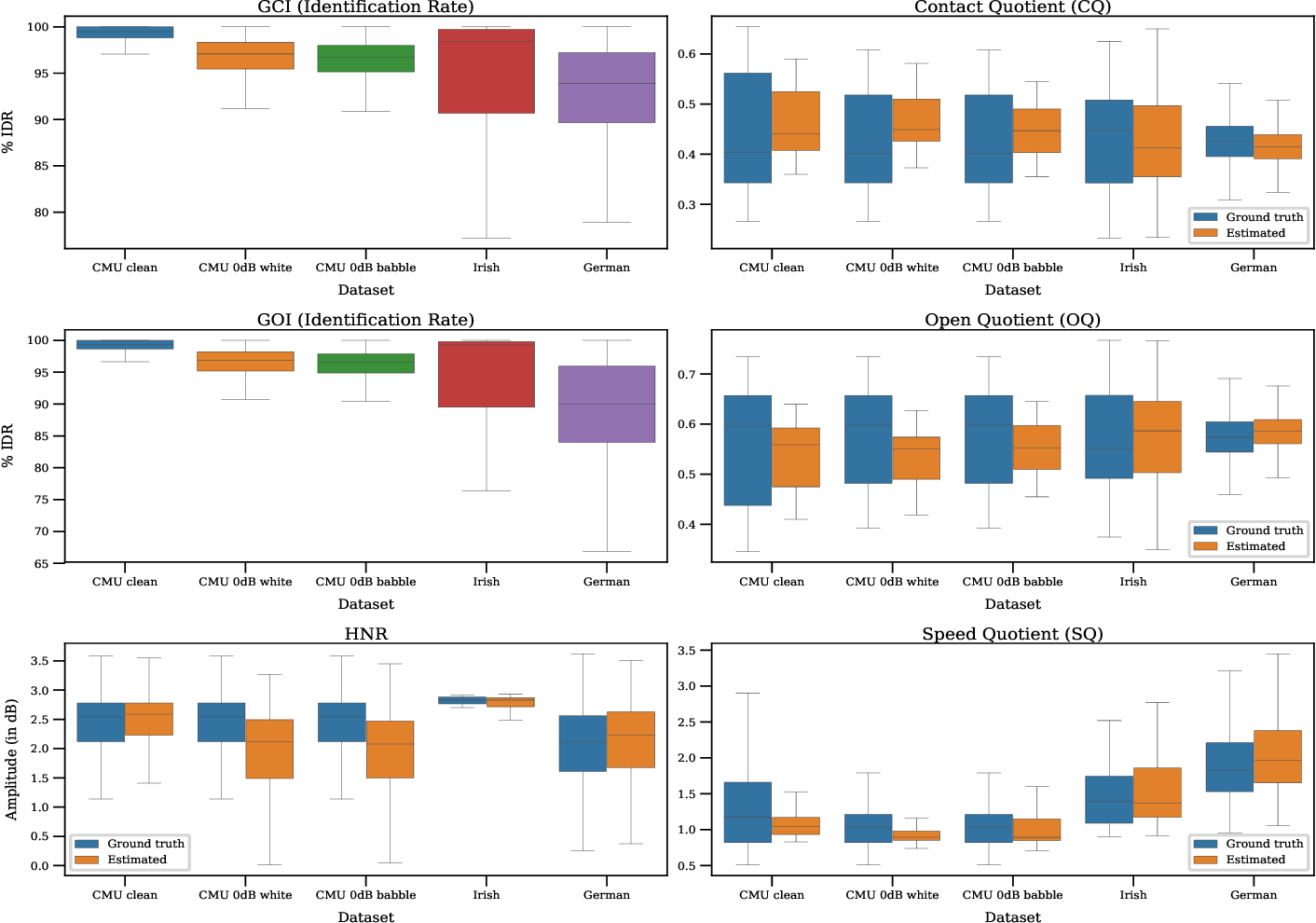 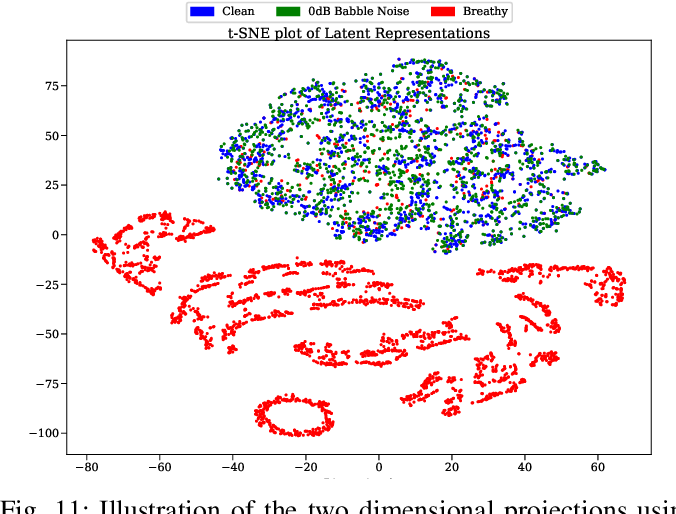 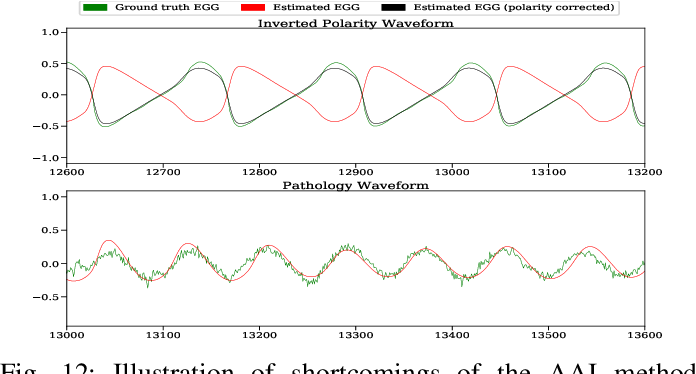 Speech produced by human vocal apparatus conveys substantial non-semantic information including the gender of the speaker, voice quality, affective state, abnormalities in the vocal apparatus etc. Such information is attributed to the properties of the voice source signal, which is usually estimated from the speech signal. However, most of the source estimation techniques depend heavily on the goodness of the model assumptions and are prone to noise. A popular alternative is to indirectly obtain the source information through the Electroglottographic (EGG) signal that measures the electrical admittance around the vocal folds using a dedicated hardware. In this paper, we address the problem of estimating the EGG signal directly from the speech signal, devoid of any hardware. Sampling from the intractable conditional distribution of the EGG signal given the speech signal is accomplished through optimization of an evidence lower bound. This is constructed via minimization of the KL-divergence between the true and the approximated posteriors of a latent variable learned using a deep neural auto-encoder that serves an informative prior which reconstructs the EGG signal. We demonstrate the efficacy of the method to generate EGG signal by conducting several experiments on datasets comprising multiple speakers, voice qualities, noise settings and speech pathologies. The proposed method is evaluated on many benchmark metrics and is found to agree with the gold standards while being better than the state-of-the-art algorithms on a few tasks such as epoch extraction.


* Submitted to IEEE/ACM Transactions on Audio, Speech and Language Processing 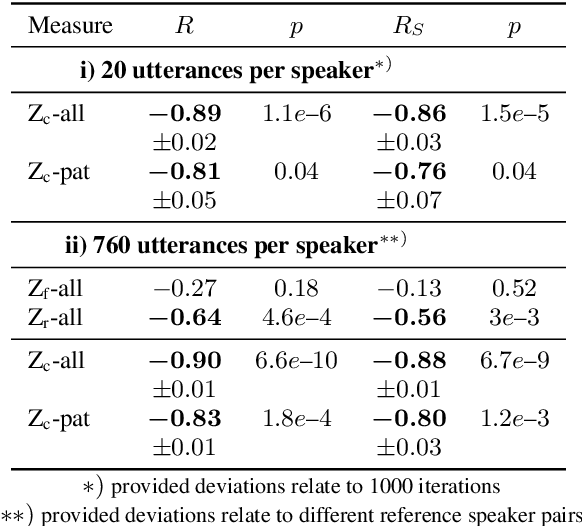 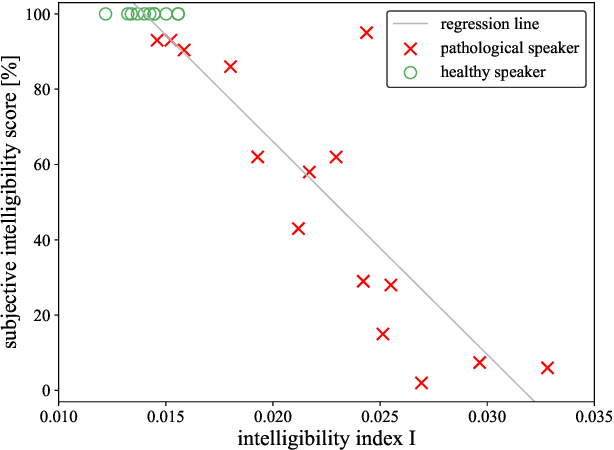 Speech intelligibility assessment plays an important role in the therapy of patients suffering from pathological speech disorders. Automatic and objective measures are desirable to assist therapists in their traditionally subjective and labor-intensive assessments. In this work, we investigate a novel approach for obtaining such a measure using the divergence in disentangled latent speech representations of a parallel utterance pair, obtained from a healthy reference and a pathological speaker. Experiments on an English database of Cerebral Palsy patients, using all available utterances per speaker, show high and significant correlation values (R = -0.9) with subjective intelligibility measures, while having only minimal deviation (+-0.01) across four different reference speaker pairs. We also demonstrate the robustness of the proposed method (R = -0.89 deviating +-0.02 over 1000 iterations) by considering a significantly smaller amount of utterances per speaker. Our results are among the first to show that disentangled speech representations can be used for automatic pathological speech intelligibility assessment, resulting in a reference speaker pair invariant method, applicable in scenarios with only few utterances available. 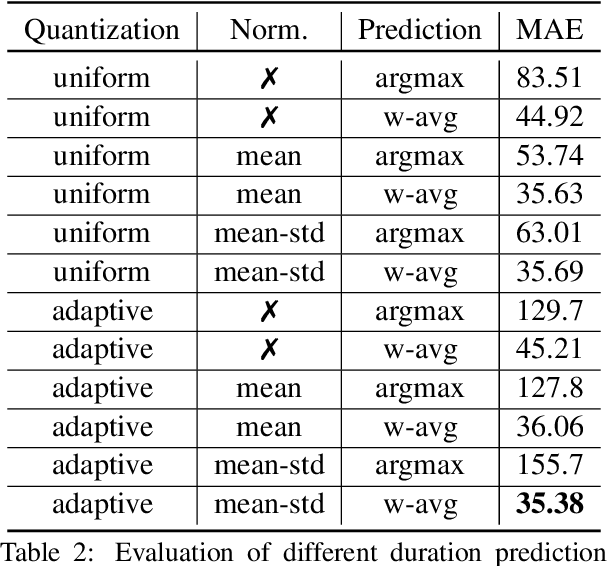 Speech emotion conversion is the task of modifying the perceived emotion of a speech utterance while preserving the lexical content and speaker identity. In this study, we cast the problem of emotion conversion as a spoken language translation task. We decompose speech into discrete and disentangled learned representations, consisting of content units, F0, speaker, and emotion. First, we modify the speech content by translating the content units to a target emotion, and then predict the prosodic features based on these units. Finally, the speech waveform is generated by feeding the predicted representations into a neural vocoder. Such a paradigm allows us to go beyond spectral and parametric changes of the signal, and model non-verbal vocalizations, such as laughter insertion, yawning removal, etc. We demonstrate objectively and subjectively that the proposed method is superior to the baselines in terms of perceived emotion and audio quality. We rigorously evaluate all components of such a complex system and conclude with an extensive model analysis and ablation study to better emphasize the architectural choices, strengths and weaknesses of the proposed method. Samples and code will be publicly available under the following link: https://speechbot.github.io/emotion. 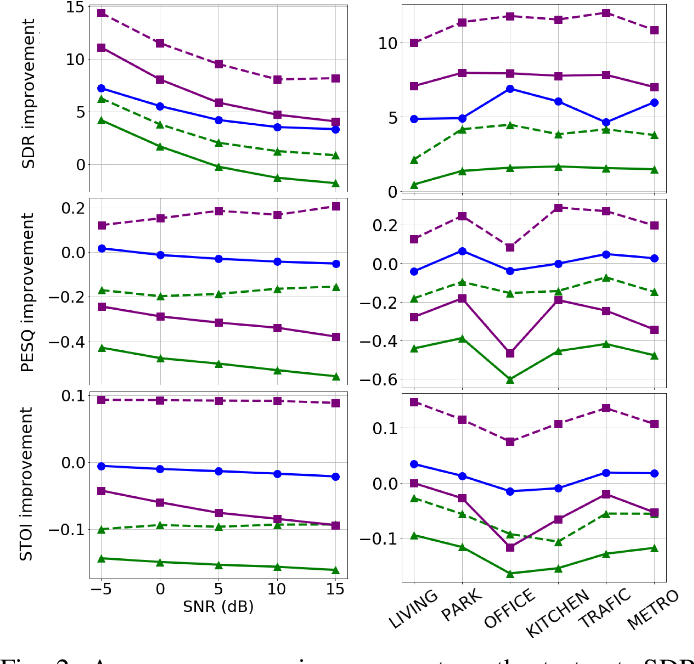 In this paper, we are interested in audio-visual speech separation given a single-channel audio recording as well as visual information (lips movements) associated with each speaker. We propose an unsupervised technique based on audio-visual generative modeling of clean speech. More specifically, during training, a latent variable generative model is learned from clean speech spectrograms using a variational auto-encoder (VAE). To better utilize the visual information, the posteriors of the latent variables are inferred from mixed speech (instead of clean speech) as well as the visual data. The visual modality also serves as a prior for latent variables, through a visual network. At test time, the learned generative model (both for speaker-independent and speaker-dependent scenarios) is combined with an unsupervised non-negative matrix factorization (NMF) variance model for background noise. All the latent variables and noise parameters are then estimated by a Monte Carlo expectation-maximization algorithm. Our experiments show that the proposed unsupervised VAE-based method yields better separation performance than NMF-based approaches as well as a supervised deep learning-based technique. 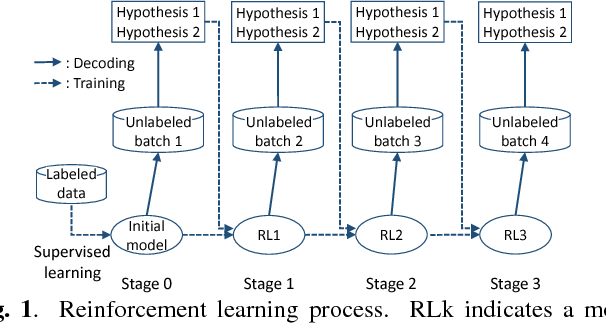 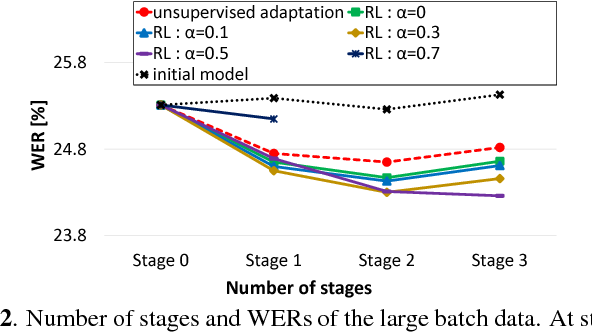 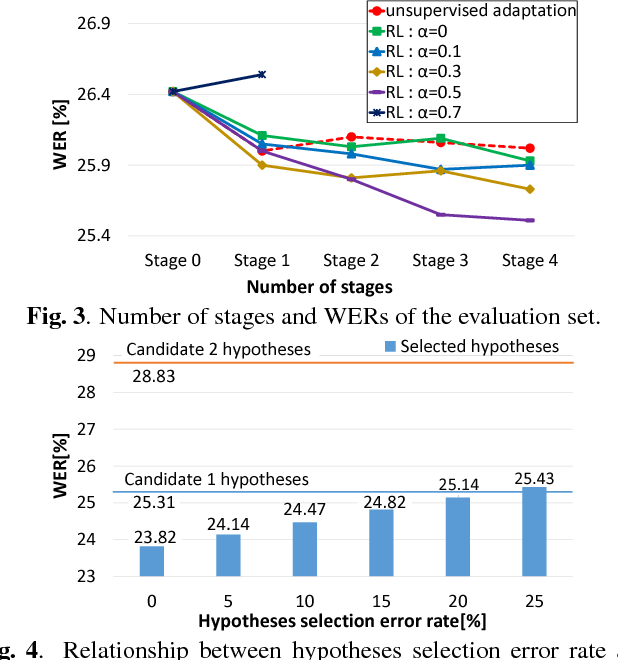 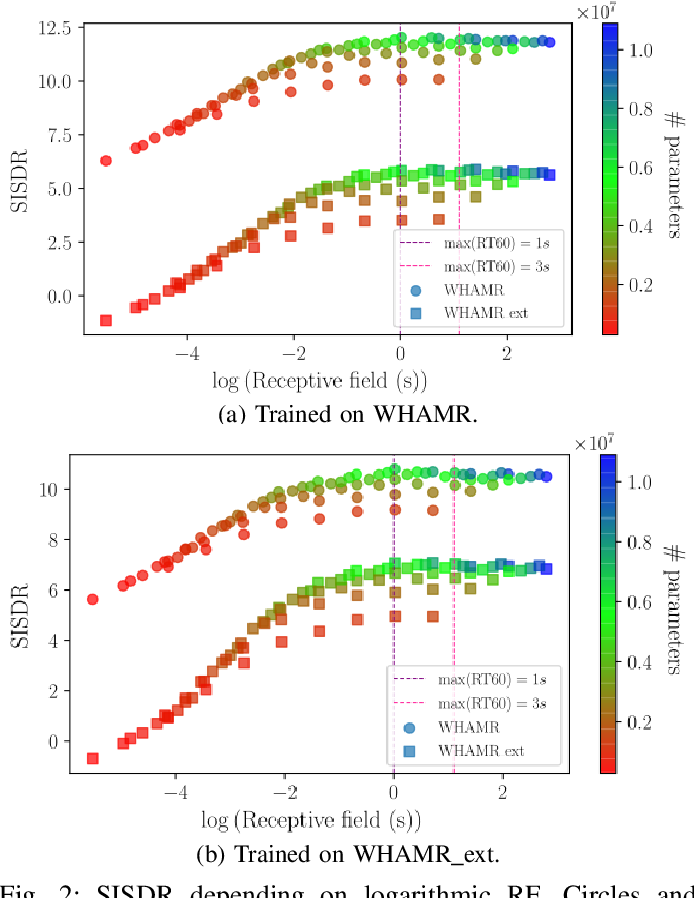 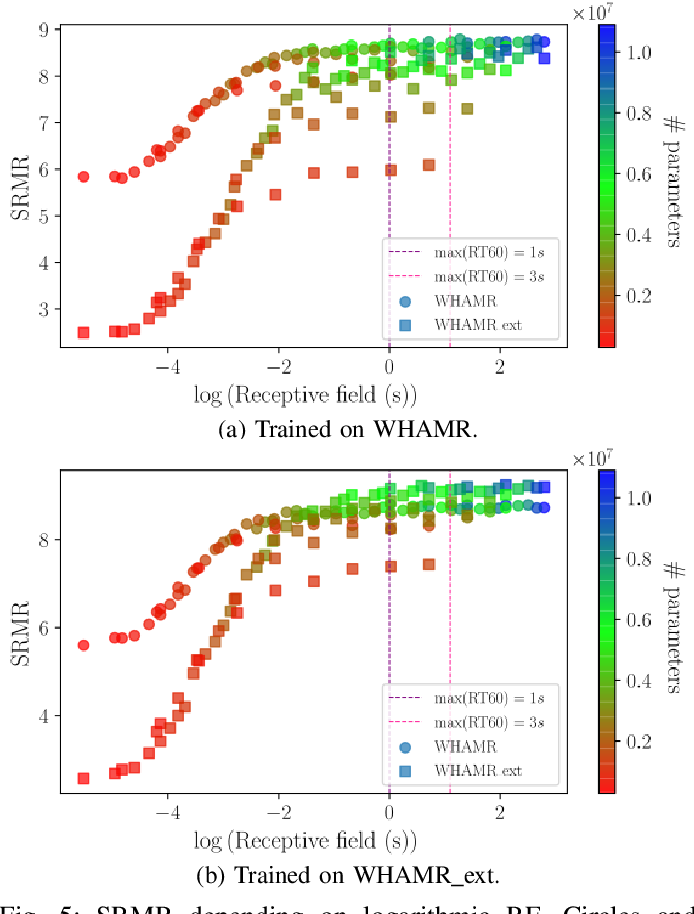 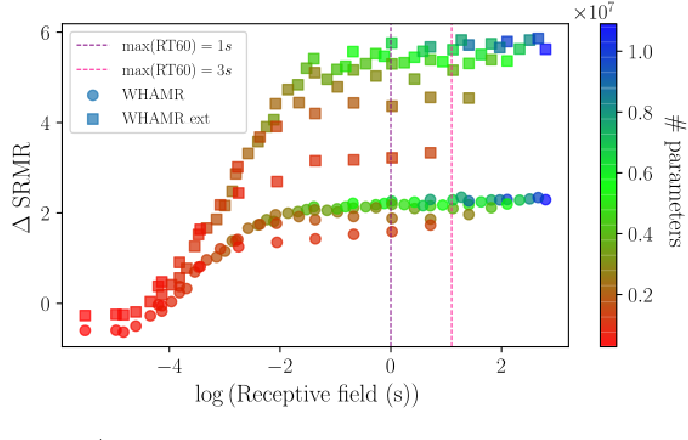 Speech dereverberation is often an important requirement in robust speech processing tasks. Supervised deep learning (DL) models give state-of-the-art performance for single-channel speech dereverberation. Temporal convolutional networks (TCNs) are commonly used for sequence modelling in speech enhancement tasks. A feature of TCNs is that they have a receptive field (RF) dependant on the specific model configuration which determines the number of input frames that can be observed to produce an individual output frame. It has been shown that TCNs are capable of performing dereverberation of simulated speech data, however a thorough analysis, especially with focus on the RF is yet lacking in the literature. This paper analyses dereverberation performance depending on the model size and the RF of TCNs. Experiments using the WHAMR corpus which is extended to include room impulse responses (RIRs) with larger T60 values demonstrate that a larger RF can have significant improvement in performance when training smaller TCN models. It is also demonstrated that TCNs benefit from a wider RF when dereverberating RIRs with larger RT60 values.