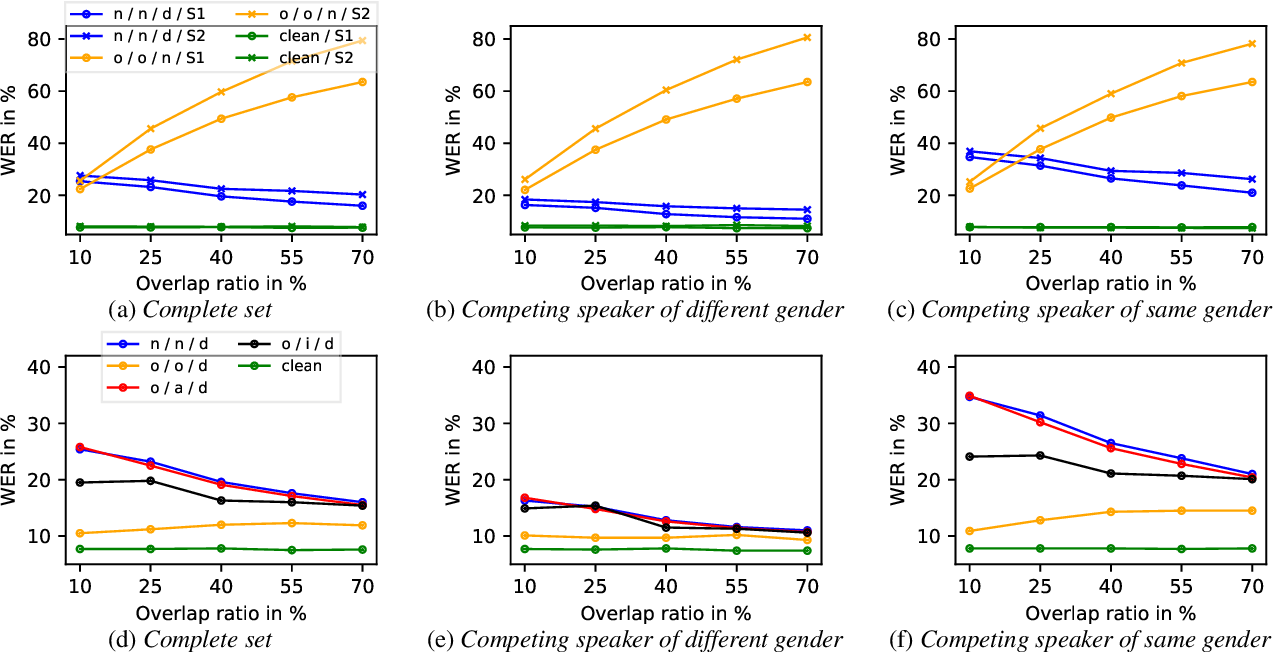 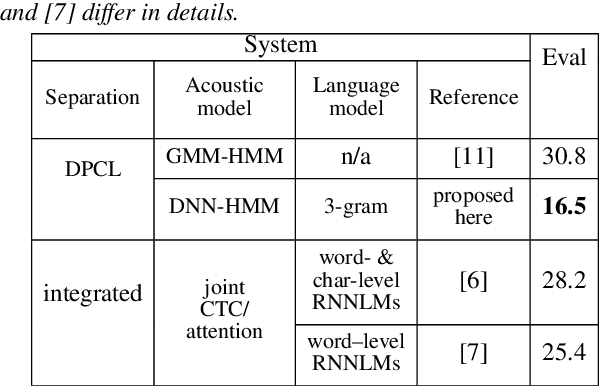 Significant performance degradation of automatic speech recognition (ASR) systems is observed when the audio signal contains cross-talk. One of the recently proposed approaches to solve the problem of multi-speaker ASR is the deep clustering (DPCL) approach. Combining DPCL with a state-of-the-art hybrid acoustic model, we obtain a word error rate (WER) of 16.5 % on the commonly used wsj0-2mix dataset, which is the best performance reported thus far to the best of our knowledge. The wsj0-2mix dataset contains simulated cross-talk where the speech of multiple speakers overlaps for almost the entire utterance. In a more realistic ASR scenario the audio signal contains significant portions of single-speaker speech and only part of the signal contains speech of multiple competing speakers. This paper investigates obstacles of applying DPCL as a preprocessing method for ASR in such a scenario of sparsely overlapping speech. To this end we present a data simulation approach, closely related to the wsj0-2mix dataset, generating sparsely overlapping speech datasets of arbitrary overlap ratio. The analysis of applying DPCL to sparsely overlapping speech is an important interim step between the fully overlapping datasets like wsj0-2mix and more realistic ASR datasets, such as CHiME-5 or AMI.

Speech synthesis is one of the challenging tasks to automate by deep learning, also being a low-resource language there are very few attempts at Bangla speech synthesis. Most of the existing works can't work with anything other than simple Bangla characters script, very short sentences, etc. This work attempts to solve these problems by introducing Byakta, the first-ever open-source deep learning-based bilingual (Bangla and English) text to a speech synthesis system. A speech recognition model-based automated scoring metric was also proposed to evaluate the performance of a TTS model. We also introduce a test benchmark dataset for Bangla speech synthesis models for evaluating speech quality. The TTS is available at https://github.com/zabir-nabil/bangla-tts 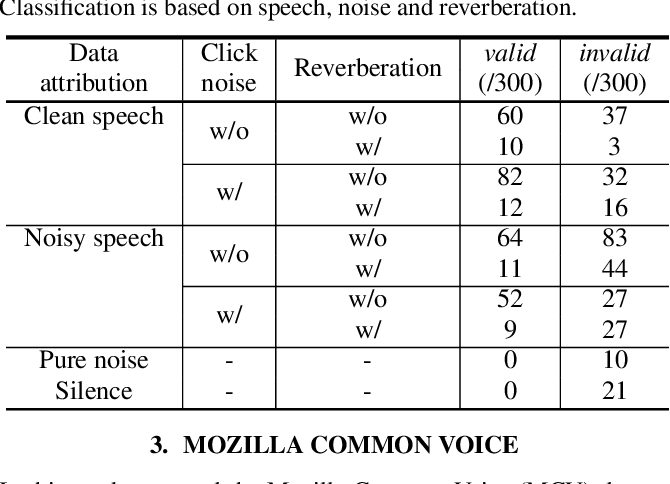 Recently, deep neural network (DNN)-based speech enhancement (SE) systems have been used with great success. During training, such systems require clean speech data - ideally, in large quantity with a variety of acoustic conditions, many different speaker characteristics and for a given sampling rate (e.g., 48kHz for fullband SE). However, obtaining such clean speech data is not straightforward - especially, if only considering publicly available datasets. At the same time, a lot of material for automatic speech recognition (ASR) with the desired acoustic/speaker/sampling rate characteristics is publicly available except being clean, i.e., it also contains background noise as this is even often desired in order to have ASR systems that are noise-robust. Hence, using such data to train SE systems is not straightforward. In this paper, we propose two improvements to train SE systems on noisy speech data. First, we propose several modifications of the loss functions, which make them robust against noisy speech targets. In particular, computing the median over the sample axis before averaging over time-frequency bins allows to use such data. Furthermore, we propose a noise augmentation scheme for mixture-invariant training (MixIT), which allows using it also in such scenarios. For our experiments, we use the Mozilla Common Voice dataset and we show that using our robust loss function improves PESQ by up to 0.19 compared to a system trained in the traditional way. Similarly, for MixIT we can see an improvement of up to 0.27 in PESQ when using our proposed noise augmentation. 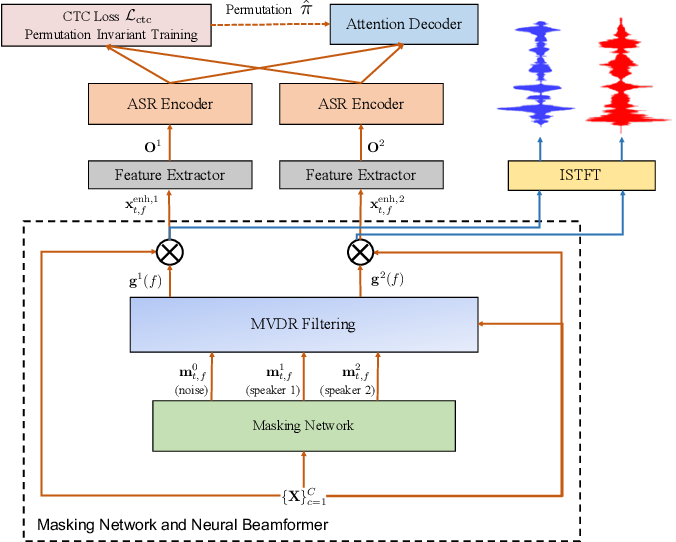 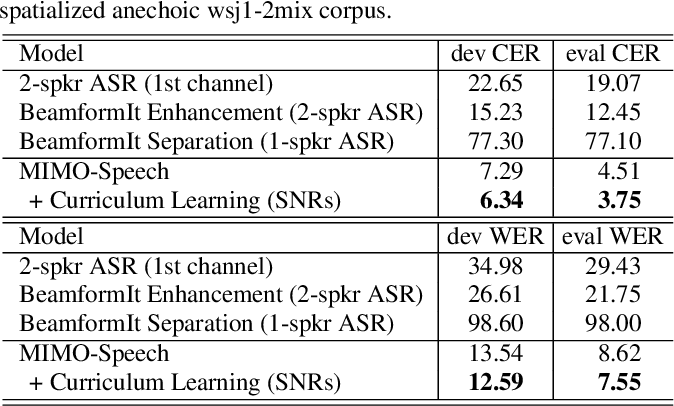 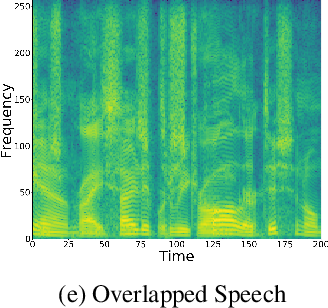 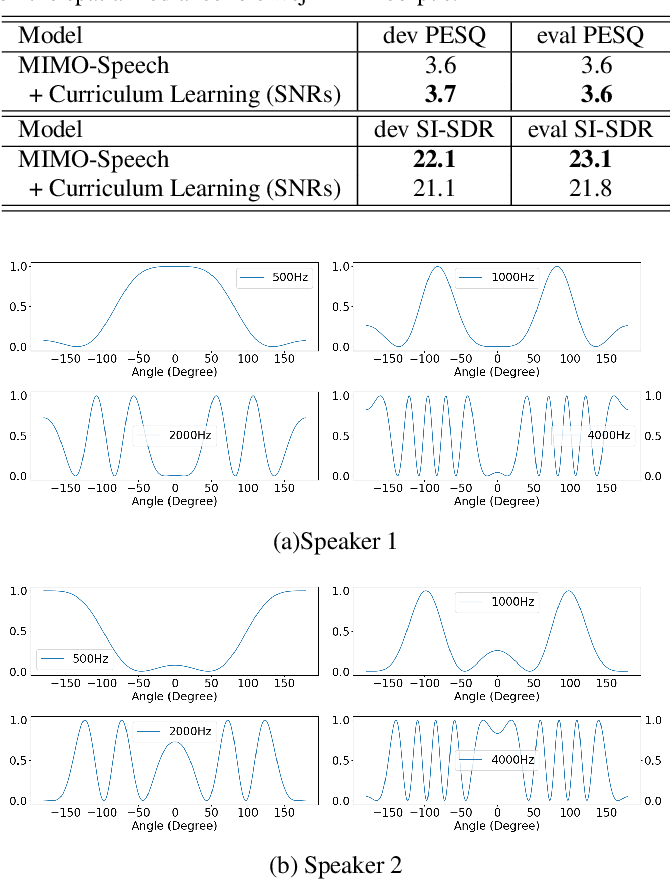 Recently, the end-to-end approach has proven its efficacy in monaural multi-speaker speech recognition. However, high word error rates (WERs) still prevent these systems from being used in practical applications. On the other hand, the spatial information in multi-channel signals has proven helpful in far-field speech recognition tasks. In this work, we propose a novel neural sequence-to-sequence (seq2seq) architecture, MIMO-Speech, which extends the original seq2seq to deal with multi-channel input and multi-channel output so that it can fully model multi-channel multi-speaker speech separation and recognition. MIMO-Speech is a fully neural end-to-end framework, which is optimized only via an ASR criterion. It is comprised of: 1) a monaural masking network, 2) a multi-source neural beamformer, and 3) a multi-output speech recognition model. With this processing, the input overlapped speech is directly mapped to text sequences. We further adopted a curriculum learning strategy, making the best use of the training set to improve the performance. The experiments on the spatialized wsj1-2mix corpus show that our model can achieve more than 60% WER reduction compared to the single-channel system with high quality enhanced signals (SI-SDR = 23.1 dB) obtained by the above separation function.

This paper considers speech enhancement of signals picked up in one noisy environment which must be presented to a listener in another noisy environment. Recently, it has been shown that an optimal solution to this problem requires the consideration of the noise sources in both environments jointly. However, the existing optimal mutual information based method requires a complicated system model that includes natural speech variations, and relies on approximations and assumptions of the underlying signal distributions. In this paper, we propose to use a simpler signal model and optimize speech intelligibility based on the Approximated Speech Intelligibility Index (ASII). We derive a closed-form solution to the joint far- and near-end speech enhancement problem that is independent of the marginal distribution of signal coefficients, and that achieves similar performance to existing work. In addition, we do not need to model or optimize for natural speech variations. 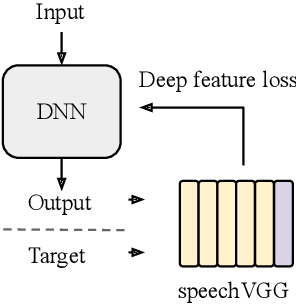 A growing number of studies in the field of speech processing employ feature losses to train deep learning systems. While the application of this framework typically yields beneficial results, the question of what's the optimal setup for extracting transferable speech features to compute losses remains underexplored. In this study, we extend our previous work on speechVGG, a deep feature extractor for training speech processing frameworks. The extractor is based on the classic VGG-16 convolutional neural network re-trained to identify words from the log magnitude STFT features. To estimate the influence of different hyperparameters on the extractor's performance, we applied several configurations of speechVGG to train a system for informed speech inpainting, the context-based recovery of missing parts from time-frequency masked speech segments. We show that changing the size of the dictionary and the size of the dataset used to pre-train the speechVGG notably modulates task performance of the main framework. 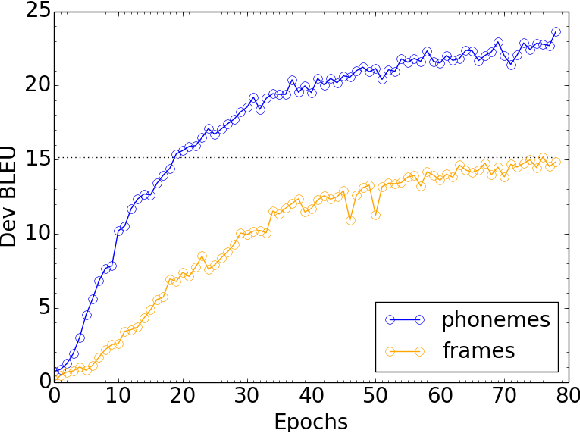 Previous work on end-to-end translation from speech has primarily used frame-level features as speech representations, which creates longer, sparser sequences than text. We show that a naive method to create compressed phoneme-like speech representations is far more effective and efficient for translation than traditional frame-level speech features. Specifically, we generate phoneme labels for speech frames and average consecutive frames with the same label to create shorter, higher-level source sequences for translation. We see improvements of up to 5 BLEU on both our high and low resource language pairs, with a reduction in training time of 60%. Our improvements hold across multiple data sizes and two language pairs.

SLAM: A Unified Encoder for Speech and Language Modeling via Speech-Text Joint Pre-Training

Unsupervised pre-training is now the predominant approach for both text and speech understanding. Self-attention models pre-trained on large amounts of unannotated data have been hugely successful when fine-tuned on downstream tasks from a variety of domains and languages. This paper takes the universality of unsupervised language pre-training one step further, by unifying speech and text pre-training within a single model. We build a single encoder with the BERT objective on unlabeled text together with the w2v-BERT objective on unlabeled speech. To further align our model representations across modalities, we leverage alignment losses, specifically Translation Language Modeling (TLM) and Speech Text Matching (STM) that make use of supervised speech-text recognition data. We demonstrate that incorporating both speech and text data during pre-training can significantly improve downstream quality on CoVoST~2 speech translation, by around 1 BLEU compared to single-modality pre-trained models, while retaining close to SotA performance on LibriSpeech and SpeechStew ASR tasks. On four GLUE tasks and text-normalization, we observe evidence of capacity limitations and interference between the two modalities, leading to degraded performance compared to an equivalent text-only model, while still being competitive with BERT. Through extensive empirical analysis we also demonstrate the importance of the choice of objective function for speech pre-training, and the beneficial effect of adding additional supervised signals on the quality of the learned representations. 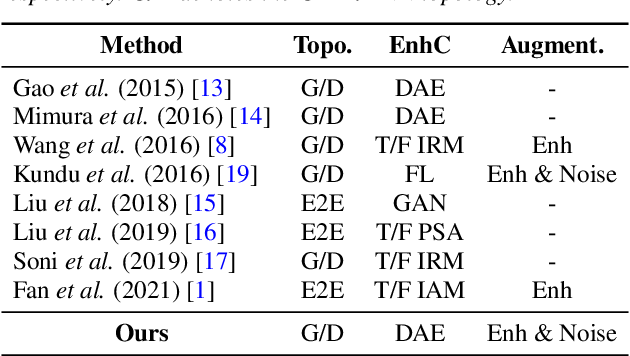 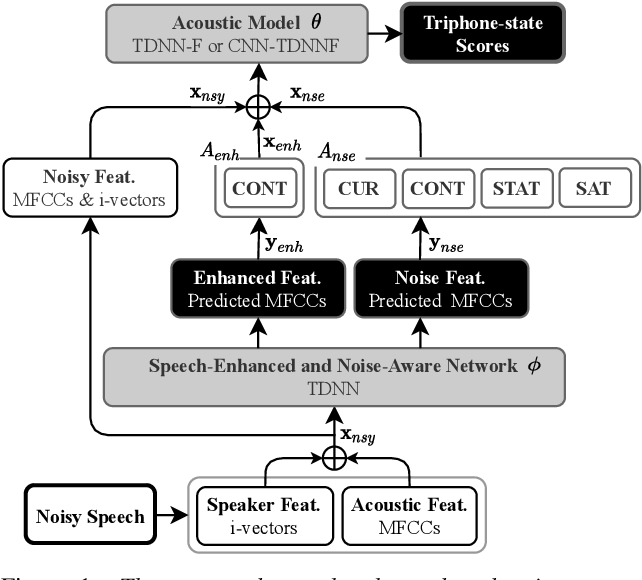 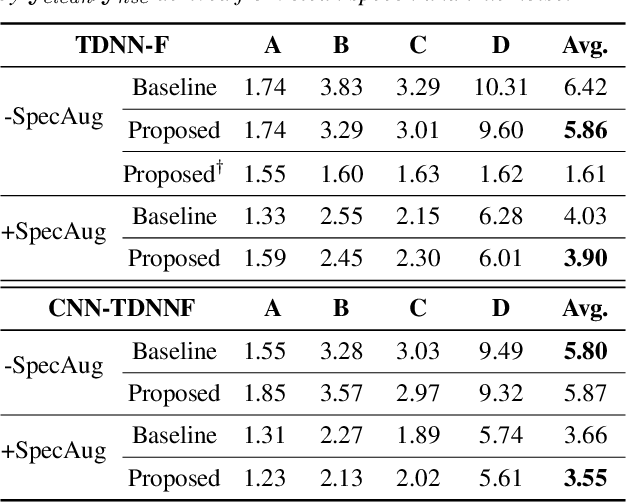