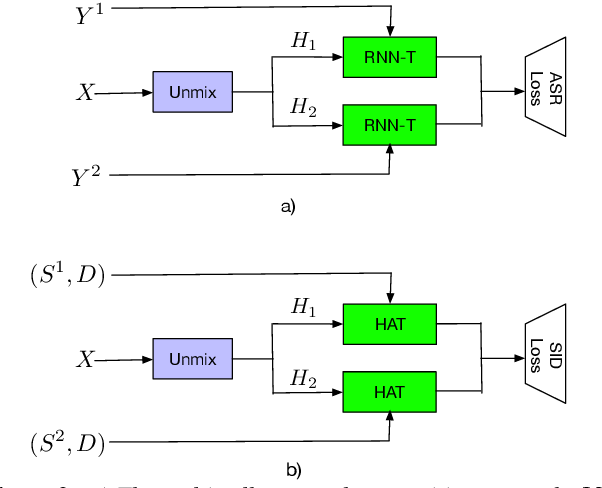 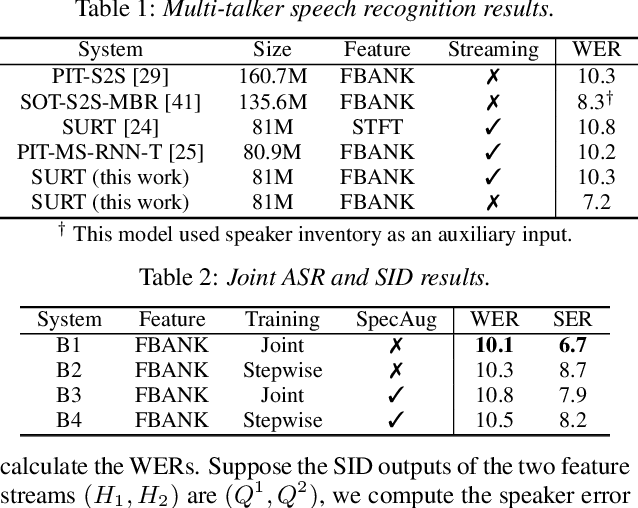 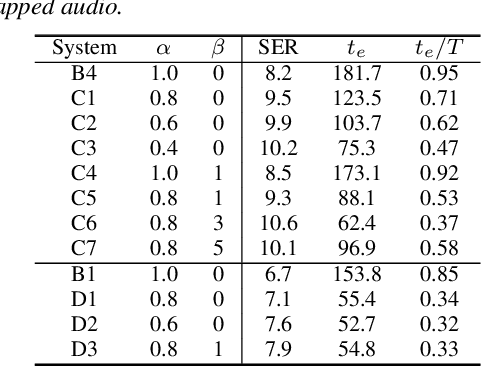 In multi-talker scenarios such as meetings and conversations, speech processing systems are usually required to transcribe the audio as well as identify the speakers for downstream applications. Since overlapped speech is common in this case, conventional approaches usually address this problem in a cascaded fashion that involves speech separation, speech recognition and speaker identification that are trained independently. In this paper, we propose Streaming Unmixing, Recognition and Identification Transducer (SURIT) -- a new framework that deals with this problem in an end-to-end streaming fashion. SURIT employs the recurrent neural network transducer (RNN-T) as the backbone for both speech recognition and speaker identification. We validate our idea on the LibrispeechMix dataset -- a multi-talker dataset derived from Librispeech, and present encouraging results. 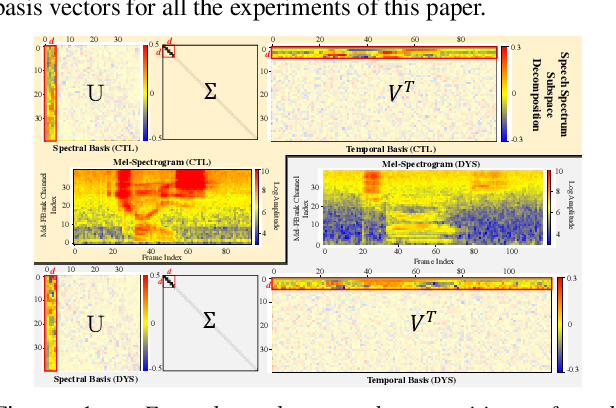 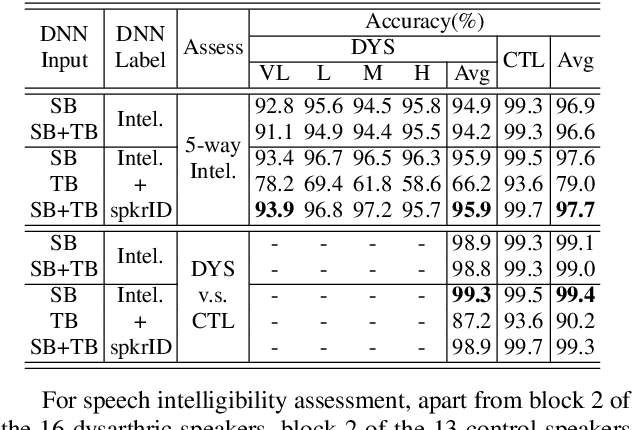 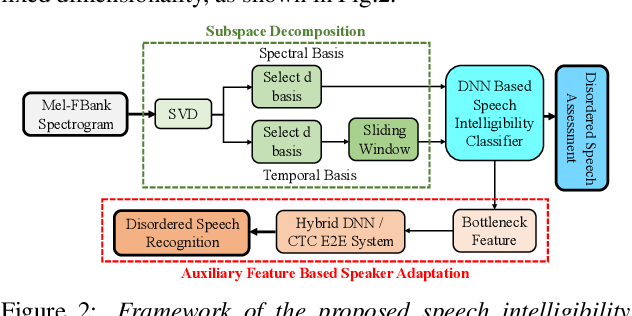 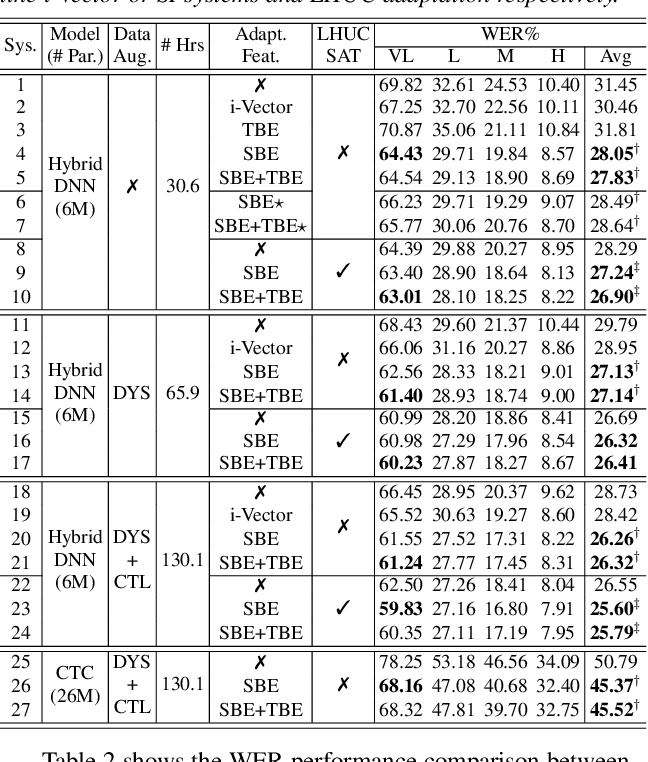 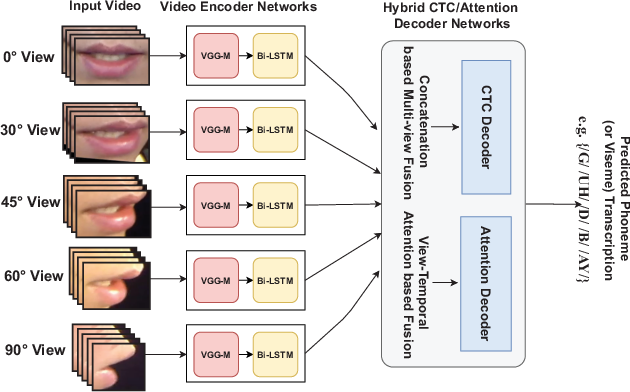 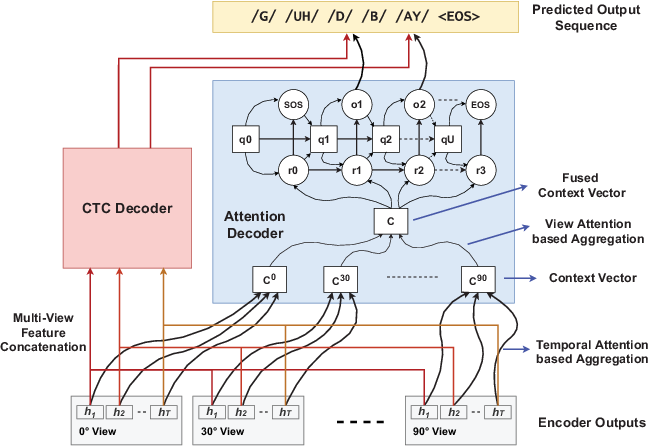 Speech as a natural signal is composed of three parts - visemes (visual part of speech), phonemes (spoken part of speech), and language (the imposed structure). However, video as a medium for the delivery of speech and a multimedia construct has mostly ignored the cognitive aspects of speech delivery. For example, video applications like transcoding and compression have till now ignored the fact how speech is delivered and heard. To close the gap between speech understanding and multimedia video applications, in this paper, we show the initial experiments by modelling the perception on visual speech and showing its use case on video compression. On the other hand, in the visual speech recognition domain, existing studies have mostly modeled it as a classification problem, while ignoring the correlations between views, phonemes, visemes, and speech perception. This results in solutions which are further away from how human perception works. To bridge this gap, we propose a view-temporal attention mechanism to model both the view dependence and the visemic importance in speech recognition and understanding. We conduct experiments on three public visual speech recognition datasets. The experimental results show that our proposed method outperformed the existing work by 4.99% in terms of the viseme error rate. Moreover, we show that there is a strong correlation between our model's understanding of multi-view speech and the human perception. This characteristic benefits downstream applications such as video compression and streaming where a significant number of less important frames can be compressed or eliminated while being able to maximally preserve human speech understanding with good user experience.

Building inclusive speech recognition systems is a crucial step towards developing technologies that speakers of all language varieties can use. Therefore, ASR systems must work for everybody independently of the way they speak. To accomplish this goal, there should be available data sets representing language varieties, and also an understanding of model configuration that is the most helpful in achieving robust understanding of all types of speech. However, there are not enough data sets for accented speech, and for the ones that are already available, more training approaches need to be explored to improve the quality of accented speech recognition. In this paper, we discuss recent progress towards developing more inclusive ASR systems, namely, the importance of building new data sets representing linguistic diversity, and exploring novel training approaches to improve performance for all users. We address recent directions within benchmarking ASR systems for accented speech, measure the effects of wav2vec 2.0 pre-training on accented speech recognition, and highlight corpora relevant for diverse ASR evaluations.

Speech synthesis (text to speech, TTS) and recognition (automatic speech recognition, ASR) are important speech tasks, and require a large amount of text and speech pairs for model training. However, there are more than 6,000 languages in the world and most languages are lack of speech training data, which poses significant challenges when building TTS and ASR systems for extremely low-resource languages. In this paper, we develop LRSpeech, a TTS and ASR system under the extremely low-resource setting, which can support rare languages with low data cost. LRSpeech consists of three key techniques: 1) pre-training on rich-resource languages and fine-tuning on low-resource languages; 2) dual transformation between TTS and ASR to iteratively boost the accuracy of each other; 3) knowledge distillation to customize the TTS model on a high-quality target-speaker voice and improve the ASR model on multiple voices. We conduct experiments on an experimental language (English) and a truly low-resource language (Lithuanian) to verify the effectiveness of LRSpeech. Experimental results show that LRSpeech 1) achieves high quality for TTS in terms of both intelligibility (more than 98% intelligibility rate) and naturalness (above 3.5 mean opinion score (MOS)) of the synthesized speech, which satisfy the requirements for industrial deployment, 2) achieves promising recognition accuracy for ASR, and 3) last but not least, uses extremely low-resource training data. We also conduct comprehensive analyses on LRSpeech with different amounts of data resources, and provide valuable insights and guidances for industrial deployment. We are currently deploying LRSpeech into a commercialized cloud speech service to support TTS on more rare languages. 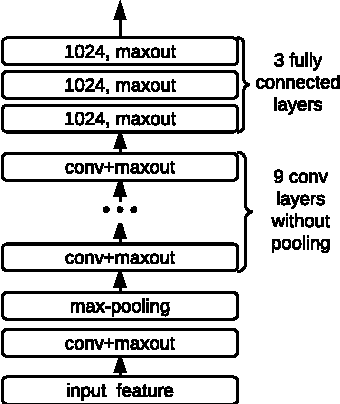 Convolutional Neural Networks (CNNs) are effective models for reducing spectral variations and modeling spectral correlations in acoustic features for automatic speech recognition (ASR). Hybrid speech recognition systems incorporating CNNs with Hidden Markov Models/Gaussian Mixture Models (HMMs/GMMs) have achieved the state-of-the-art in various benchmarks. Meanwhile, Connectionist Temporal Classification (CTC) with Recurrent Neural Networks (RNNs), which is proposed for labeling unsegmented sequences, makes it feasible to train an end-to-end speech recognition system instead of hybrid settings. However, RNNs are computationally expensive and sometimes difficult to train. In this paper, inspired by the advantages of both CNNs and the CTC approach, we propose an end-to-end speech framework for sequence labeling, by combining hierarchical CNNs with CTC directly without recurrent connections. By evaluating the approach on the TIMIT phoneme recognition task, we show that the proposed model is not only computationally efficient, but also competitive with the existing baseline systems. Moreover, we argue that CNNs have the capability to model temporal correlations with appropriate context information.

Huqariq: A Multilingual Speech Corpus of Native Languages of Peru for Speech Recognition 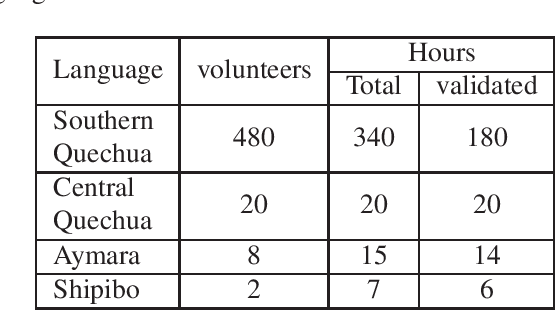 The Huqariq corpus is a multilingual collection of speech from native Peruvian languages. The transcribed corpus is intended for the research and development of speech technologies to preserve endangered languages in Peru. Huqariq is primarily designed for the development of automatic speech recognition, language identification and text-to-speech tools. In order to achieve corpus collection sustainably, we employ the crowdsourcing methodology. Huqariq includes four native languages of Peru, and it is expected that by the end of the year 2022, it can reach up to 20 native languages out of the 48 native languages in Peru. The corpus has 220 hours of transcribed audio recorded by more than 500 volunteers, making it the largest speech corpus for native languages in Peru. In order to verify the quality of the corpus, we present speech recognition experiments using 220 hours of fully transcribed audio. 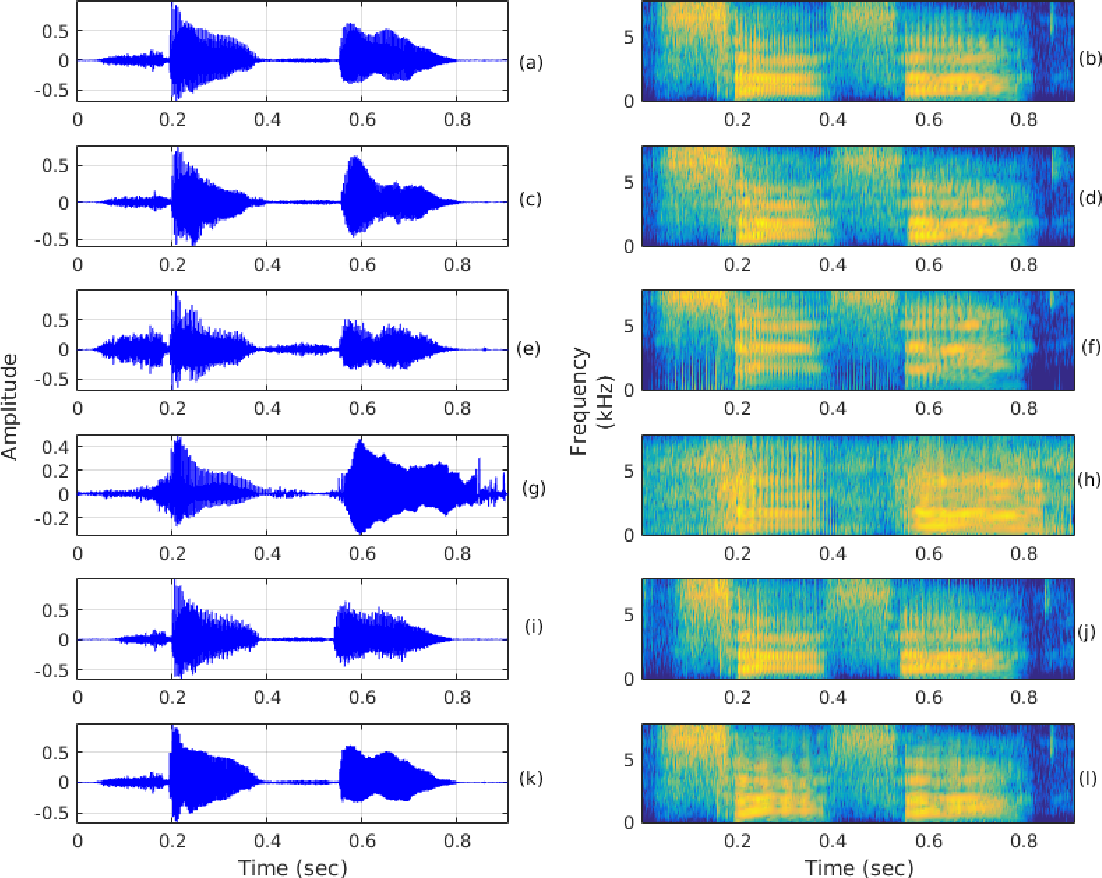 The automatic recognition of pathological speech, particularly from children with any articulatory impairment, is a challenging task due to various reasons. The lack of available domain specific data is one such obstacle that hinders its usage for different speech-based applications targeting pathological speakers. In line with the challenge, in this work, we investigate a few data augmentation techniques to simulate training data for improving the children speech recognition considering the case of cleft lip and palate (CLP) speech. The augmentation techniques explored in this study, include vocal tract length perturbation (VTLP), reverberation, speaking rate, pitch modification, and speech feature modification using cycle consistent adversarial networks (CycleGAN). Our study finds that the data augmentation methods significantly improve the CLP speech recognition performance, which is more evident when we used feature modification using CycleGAN, VTLP and reverberation based methods. More specifically, the results from this study show that our systems produce an improved phone error rate compared to the systems without data augmentation. 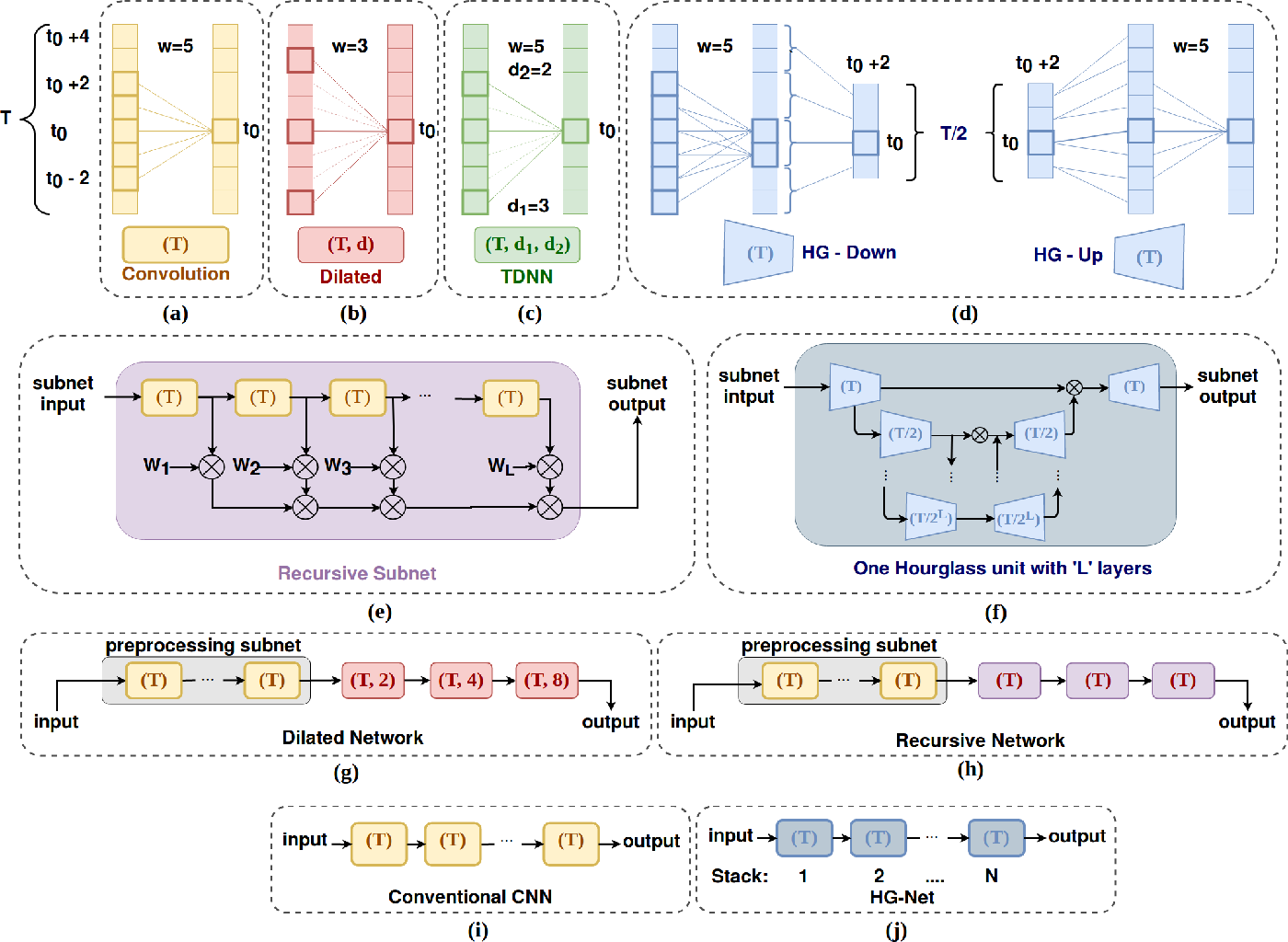 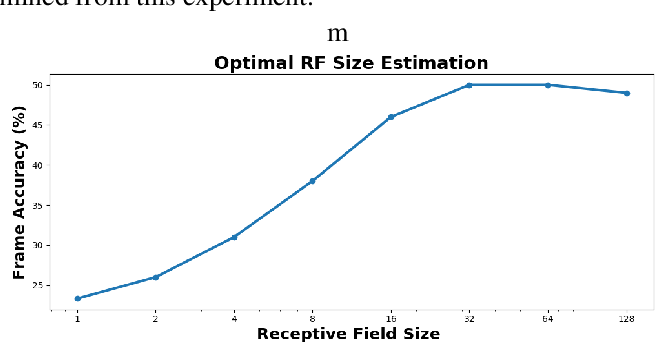 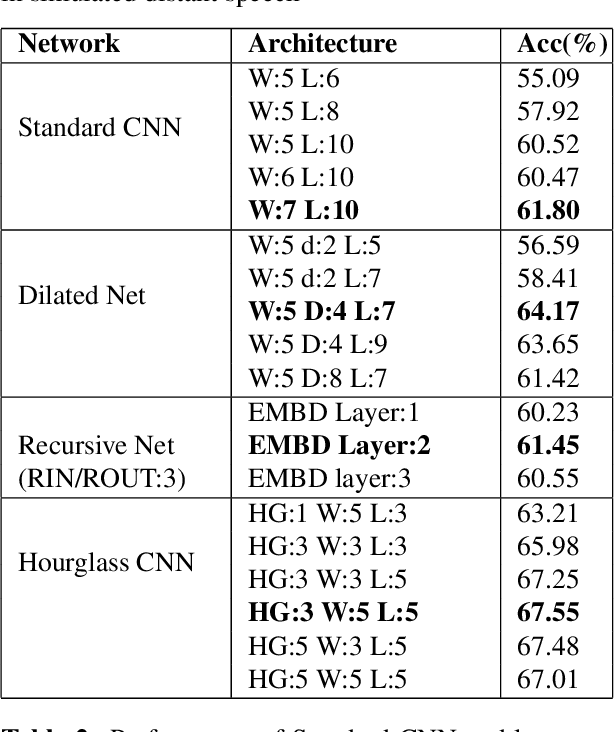 Despite significant efforts over the last few years to build a robust automatic speech recognition (ASR) system for different acoustic settings, the performance of the current state-of-the-art technologies significantly degrades in noisy reverberant environments. Convolutional Neural Networks (CNNs) have been successfully used to achieve substantial improvements in many speech processing applications including distant speech recognition (DSR). However, standard CNN architectures were not efficient in capturing long-term speech dynamics, which are essential in the design of a robust DSR system. In the present study, we address this issue by investigating variants of large receptive field CNNs (LRF-CNNs) which include deeply recursive networks, dilated convolutional neural networks, and stacked hourglass networks. To compare the efficacy of the aforementioned architectures with the standard CNN for Wall Street Journal (WSJ) corpus, we use a hybrid DNN-HMM based speech recognition system. We extend the study to evaluate the system performances for distant speech simulated using realistic room impulse responses (RIRs). Our experiments show that with fixed number of parameters across all architectures, the large receptive field networks show consistent improvements over the standard CNNs for distant speech. Amongst the explored LRF-CNNs, stacked hourglass network has shown improvements with a 8.9% relative reduction in word error rate (WER) and 10.7% relative improvement in frame accuracy compared to the standard CNNs for distant simulated speech signals. 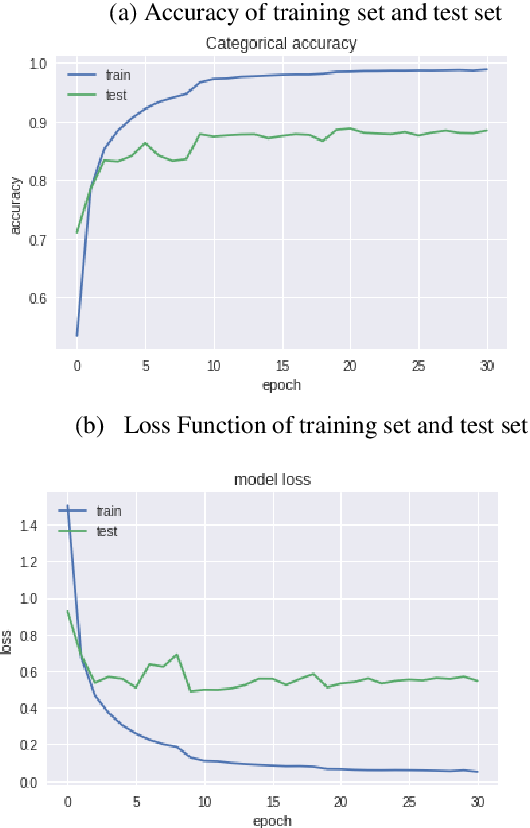 As an important part of speech recognition technology, automatic speech keyword recognition has been intensively studied in recent years. Such technology becomes especially pivotal under situations with limited infrastructures and computational resources, such as voice command recognition in vehicles and robot interaction. At present, the mainstream methods in automatic speech keyword recognition are based on long short-term memory (LSTM) networks with attention mechanism. However, due to inevitable information losses for the LSTM layer caused during feature extraction, the calculated attention weights are biased. In this paper, a novel approach, namely Multi-layer Attention Mechanism, is proposed to handle the inaccurate attention weights problem. The key idea is that, in addition to the conventional attention mechanism, information of layers prior to feature extraction and LSTM are introduced into attention weights calculations. Therefore, the attention weights are more accurate because the overall model can have more precise and focused areas. We conduct a comprehensive comparison and analysis on the keyword spotting performances on convolution neural network, bi-directional LSTM cyclic neural network, and cyclic neural network with the proposed attention mechanism on Google Speech Command datasets V2 datasets. Experimental results indicate favorable results for the proposed method and demonstrate the validity of the proposed method. The proposed multi-layer attention methods can be useful for other researches related to object spotting.