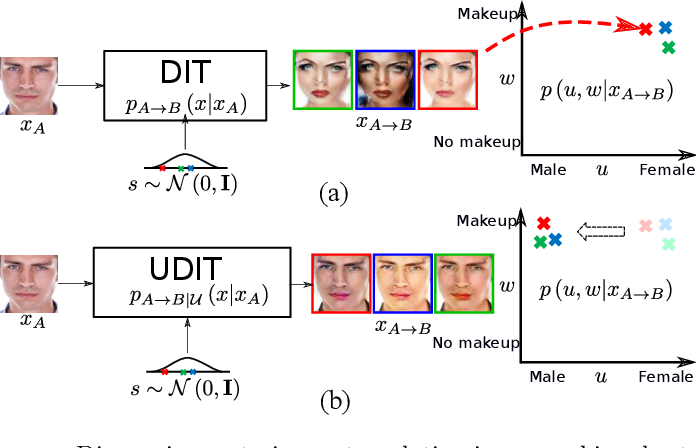 The task of unpaired image-to-image translation is highly challenging due to the lack of explicit cross-domain pairs of instances. We consider here diverse image translation (DIT), an even more challenging setting in which an image can have multiple plausible translations. This is normally achieved by explicitly disentangling content and style in the latent representation and sampling different styles codes while maintaining the image content. Despite the success of current DIT models, they are prone to suffer from bias. In this paper, we study the problem of bias in image-to-image translation. Biased datasets may add undesired changes (e.g. change gender or race in face images) to the output translations as a consequence of the particular underlying visual distribution in the target domain. In order to alleviate the effects of this problem we propose the use of semantic constraints that enforce the preservation of desired image properties. Our proposed model is a step towards unbiased diverse image-to-image translation (UDIT), and results in less unwanted changes in the translated images while still performing the wanted transformation. Experiments on several heavily biased datasets show the effectiveness of the proposed techniques in different domains such as faces, objects, and scenes.


* The paper is under consideration at Computer Vision and Image Understanding 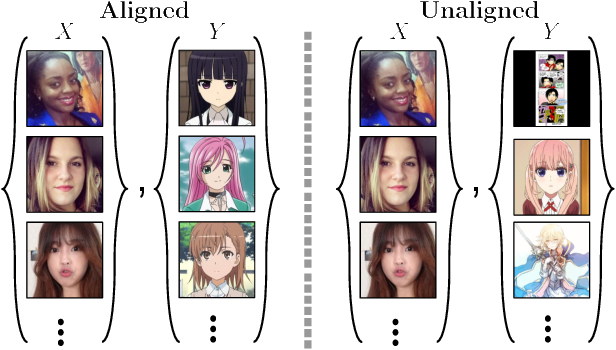 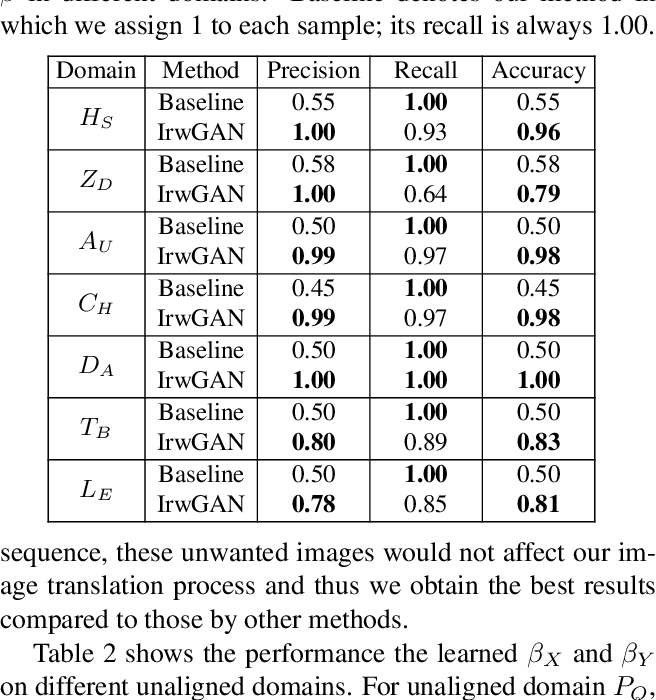 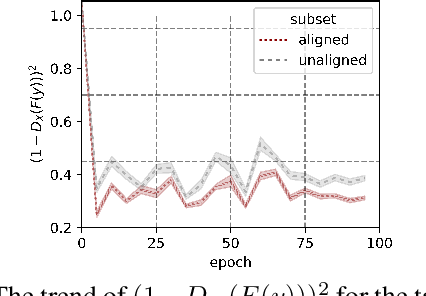 Unsupervised image-to-image translation aims at learning the mapping from the source to target domain without using paired images for training. An essential yet restrictive assumption for unsupervised image translation is that the two domains are aligned, e.g., for the selfie2anime task, the anime (selfie) domain must contain only anime (selfie) face images that can be translated to some images in the other domain. Collecting aligned domains can be laborious and needs lots of attention. In this paper, we consider the task of image translation between two unaligned domains, which may arise for various possible reasons. To solve this problem, we propose to select images based on importance reweighting and develop a method to learn the weights and perform translation simultaneously and automatically. We compare the proposed method with state-of-the-art image translation approaches and present qualitative and quantitative results on different tasks with unaligned domains. Extensive empirical evidence demonstrates the usefulness of the proposed problem formulation and the superiority of our method. 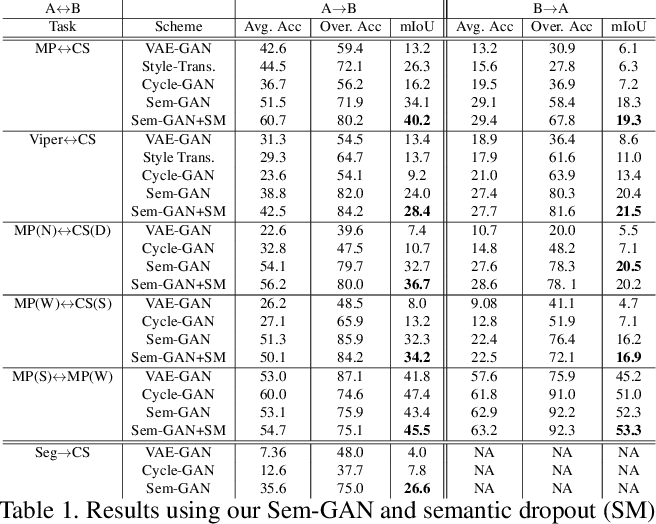 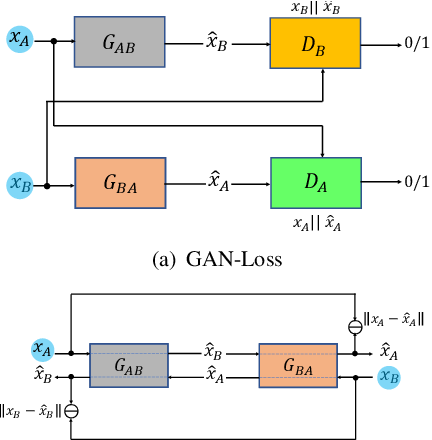 Unpaired image-to-image translation is the problem of mapping an image in the source domain to one in the target domain, without requiring corresponding image pairs. To ensure the translated images are realistically plausible, recent works, such as Cycle-GAN, demands this mapping to be invertible. While, this requirement demonstrates promising results when the domains are unimodal, its performance is unpredictable in a multi-modal scenario such as in an image segmentation task. This is because, invertibility does not necessarily enforce semantic correctness. To this end, we present a semantically-consistent GAN framework, dubbed Sem-GAN, in which the semantics are defined by the class identities of image segments in the source domain as produced by a semantic segmentation algorithm. Our proposed framework includes consistency constraints on the translation task that, together with the GAN loss and the cycle-constraints, enforces that the images when translated will inherit the appearances of the target domain, while (approximately) maintaining their identities from the source domain. We present experiments on several image-to-image translation tasks and demonstrate that Sem-GAN improves the quality of the translated images significantly, sometimes by more than 20% on the FCN score. Further, we show that semantic segmentation models, trained with synthetic images translated via Sem-GAN, leads to significantly better segmentation results than other variants. 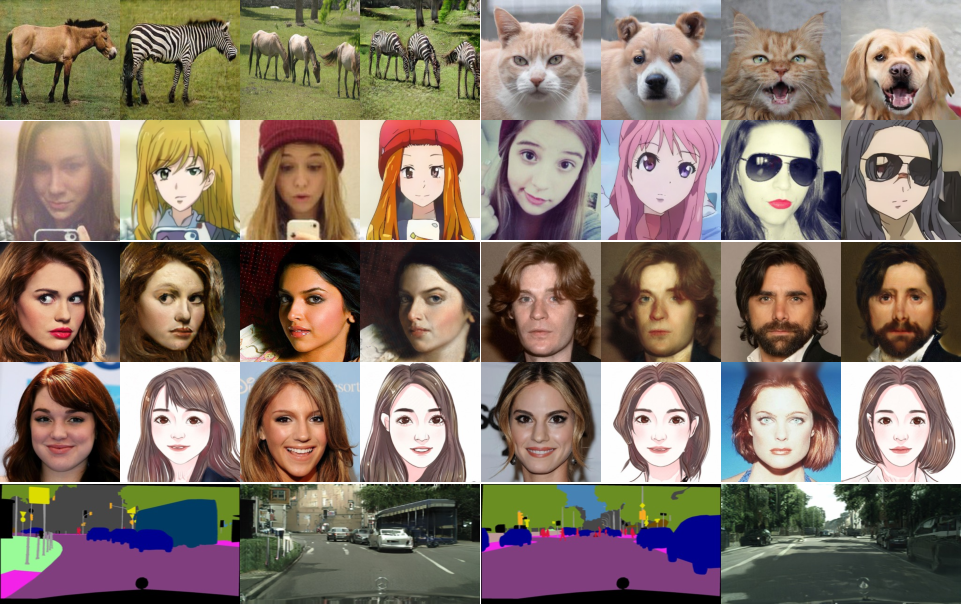 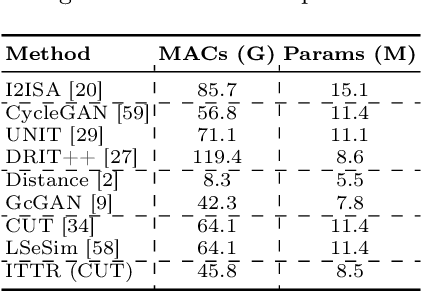 Unpaired image-to-image translation is to translate an image from a source domain to a target domain without paired training data. By utilizing CNN in extracting local semantics, various techniques have been developed to improve the translation performance. However, CNN-based generators lack the ability to capture long-range dependency to well exploit global semantics. Recently, Vision Transformers have been widely investigated for recognition tasks. Though appealing, it is inappropriate to simply transfer a recognition-based vision transformer to image-to-image translation due to the generation difficulty and the computation limitation. In this paper, we propose an effective and efficient architecture for unpaired Image-to-Image Translation with Transformers (ITTR). It has two main designs: 1) hybrid perception block (HPB) for token mixing from different receptive fields to utilize global semantics; 2) dual pruned self-attention (DPSA) to sharply reduce the computational complexity. Our ITTR outperforms the state-of-the-arts for unpaired image-to-image translation on six benchmark datasets. 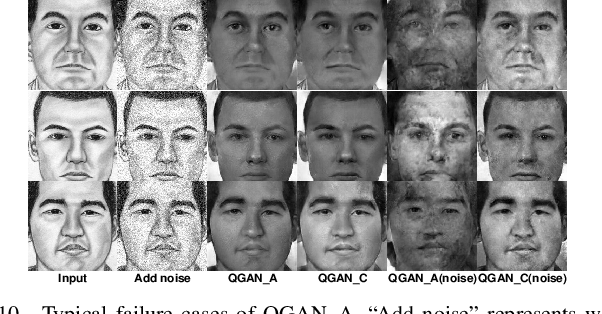 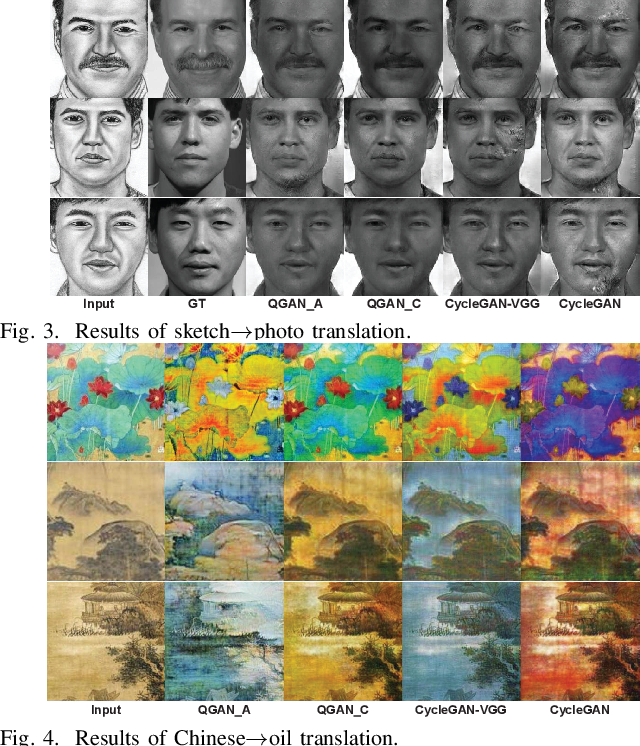 Generative Adversarial Networks (GANs) have been widely used for the image-to-image translation task. While these models rely heavily on the labeled image pairs, recently some GAN variants have been proposed to tackle the unpaired image translation task. These models exploited supervision at the domain level with a reconstruction process for unpaired image translation. On the other hand, parallel works have shown that leveraging perceptual loss functions based on high level deep features could enhance the generated image quality. Nevertheless, as these GAN-based models either depended on the pretrained deep network structure or relied on the labeled image pairs, they could not be directly applied to the unpaired image translation task. Moreover, despite the improvement of the introduced perceptual losses from deep neural networks, few researchers have explored the possibility of improving the generated image quality from classical image quality measures. To tackle the above two challenges, in this paper, we propose a unified quality-aware GAN-based framework for unpaired image-to-image translation, where a quality-aware loss is explicitly incorporated by comparing each source image and the reconstructed image at the domain level. Specifically, we design two detailed implementations of the quality loss. The first method is based on a classical image quality assessment measure by defining a classical quality-aware loss. The second method proposes an adaptive deep network based loss. Finally, extensive experimental results on many real-world datasets clearly show the quality improvement of our proposed framework, and the superiority of leveraging classical image quality measures for unpaired image translation compared to the deep network based model. 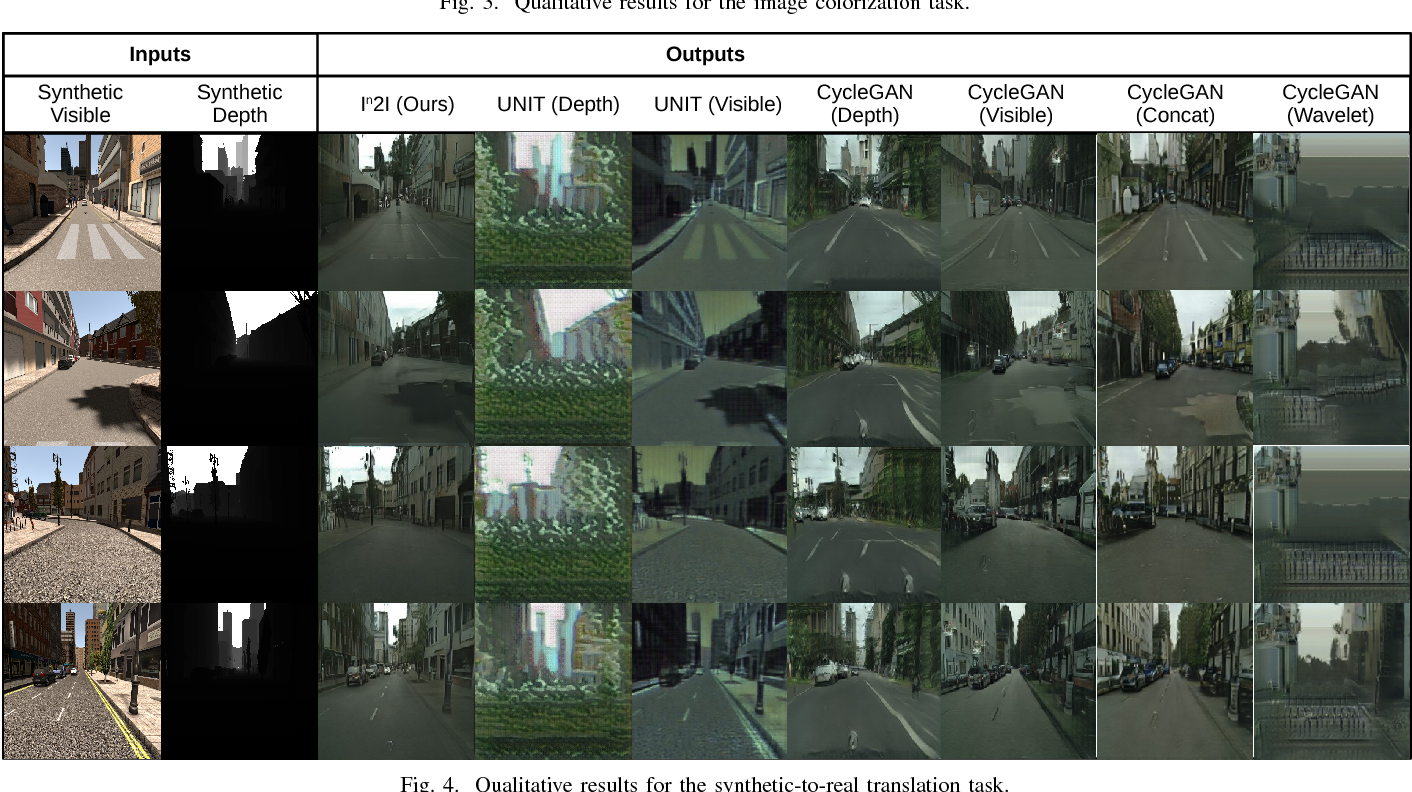 In unsupervised image-to-image translation, the goal is to learn the mapping between an input image and an output image using a set of unpaired training images. In this paper, we propose an extension of the unsupervised image-to-image translation problem to multiple input setting. Given a set of paired images from multiple modalities, a transformation is learned to translate the input into a specified domain. For this purpose, we introduce a Generative Adversarial Network (GAN) based framework along with a multi-modal generator structure and a new loss term, latent consistency loss. Through various experiments we show that leveraging multiple inputs generally improves the visual quality of the translated images. Moreover, we show that the proposed method outperforms current state-of-the-art unsupervised image-to-image translation methods. 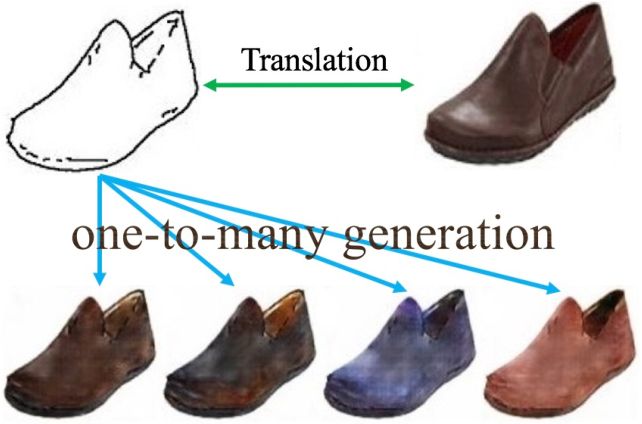 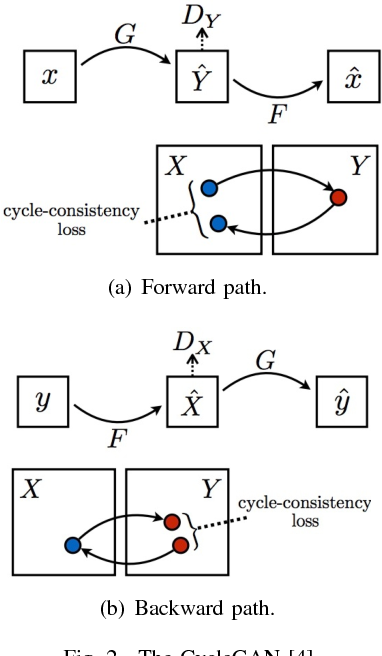 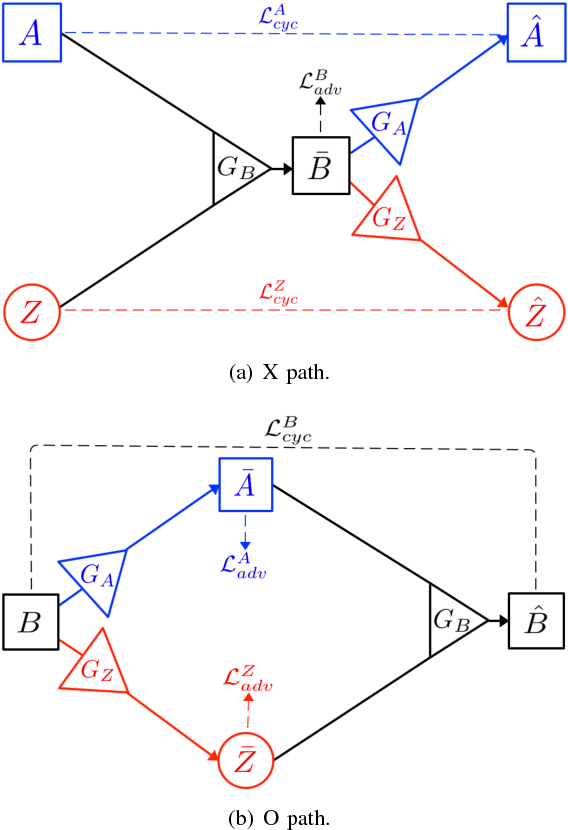 Unsupervised image-to-image translation aims at learning the relationship between samples from two image domains without supervised pair information. The relationship between two domain images can be one-to-one, one-to-many or many-to-many. In this paper, we study the one-to-many unsupervised image translation problem in which an input sample from one domain can correspond to multiple samples in the other domain. To learn the complex relationship between the two domains, we introduce an additional variable to control the variations in our one-to-many mapping. A generative model with an XO-structure, called the XOGAN, is proposed to learn the cross domain relationship among the two domains and the ad- ditional variables. Not only can we learn to translate between the two image domains, we can also handle the translated images with additional variations. Experiments are performed on unpaired image generation tasks, including edges-to-objects translation and facial image translation. We show that the proposed XOGAN model can generate plausible images and control variations, such as color and texture, of the generated images. Moreover, while state-of-the-art unpaired image generation algorithms tend to generate images with monotonous colors, XOGAN can generate more diverse results. 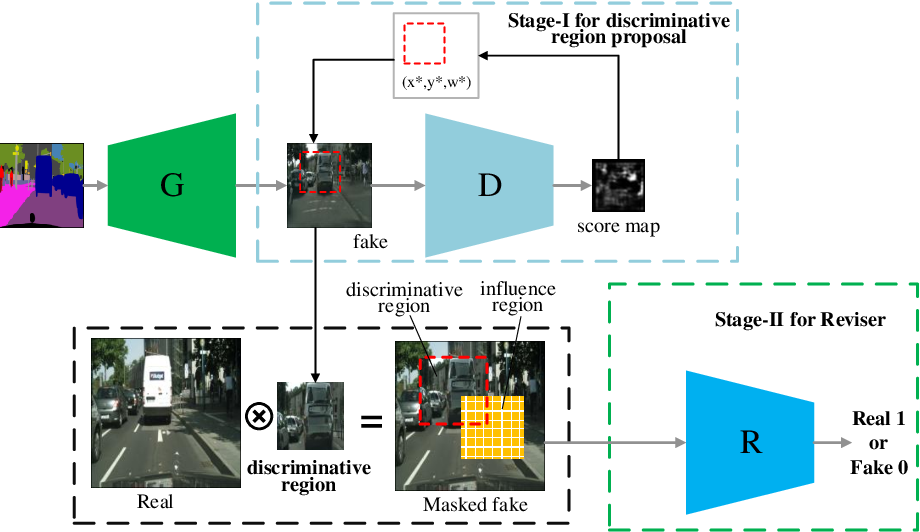 Image-to-image translation has been made much progress with embracing Generative Adversarial Networks (GANs). However, it's still very challenging for translation tasks that require high quality, especially at high-resolution and photorealism. In this paper, we present Discriminative Region Proposal Adversarial Networks (DRPAN) for high-quality image-to-image translation. We decompose the procedure of image-to-image translation task into three iterated steps, first is to generate an image with global structure but some local artifacts (via GAN), second is using our DRPnet to propose the most fake region from the generated image, and third is to implement "image inpainting" on the most fake region for more realistic result through a reviser, so that the system (DRPAN) can be gradually optimized to synthesize images with more attention on the most artifact local part. Experiments on a variety of image-to-image translation tasks and datasets validate that our method outperforms state-of-the-arts for producing high-quality translation results in terms of both human perceptual studies and automatic quantitative measures. 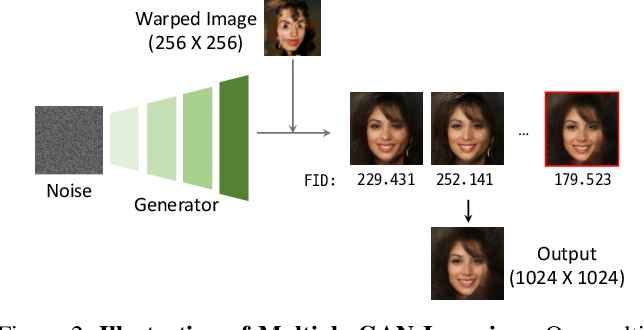 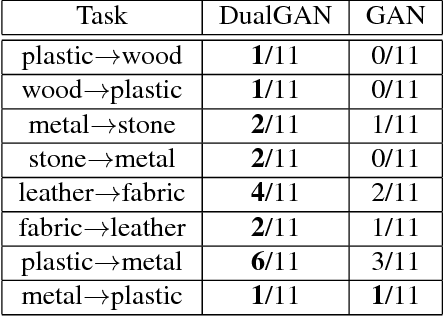 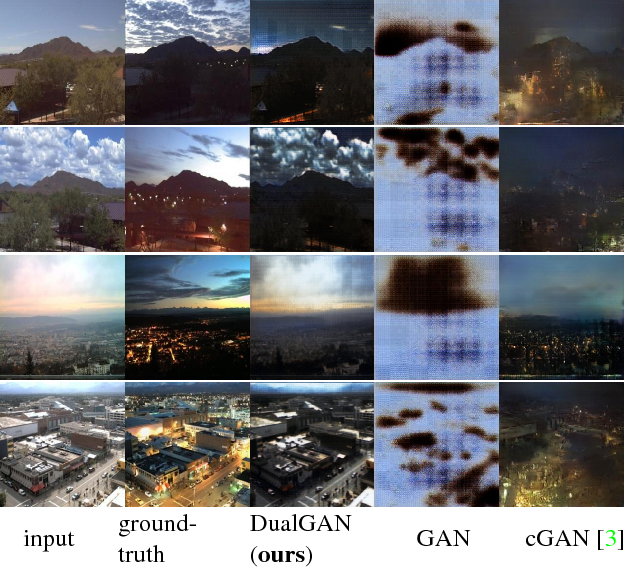 Conditional Generative Adversarial Networks (GANs) for cross-domain image-to-image translation have made much progress recently. Depending on the task complexity, thousands to millions of labeled image pairs are needed to train a conditional GAN. However, human labeling is expensive, even impractical, and large quantities of data may not always be available. Inspired by dual learning from natural language translation, we develop a novel dual-GAN mechanism, which enables image translators to be trained from two sets of unlabeled images from two domains. In our architecture, the primal GAN learns to translate images from domain U to those in domain V, while the dual GAN learns to invert the task. The closed loop made by the primal and dual tasks allows images from either domain to be translated and then reconstructed. Hence a loss function that accounts for the reconstruction error of images can be used to train the translators. Experiments on multiple image translation tasks with unlabeled data show considerable performance gain of DualGAN over a single GAN. For some tasks, DualGAN can even achieve comparable or slightly better results than conditional GAN trained on fully labeled data.