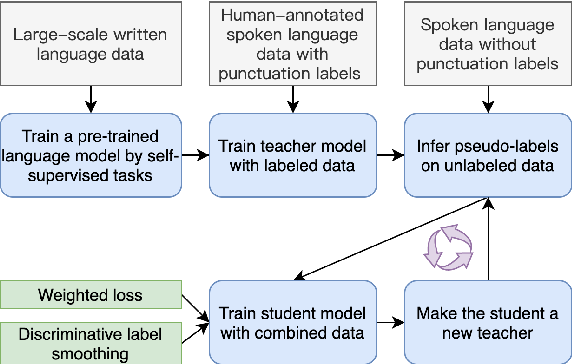 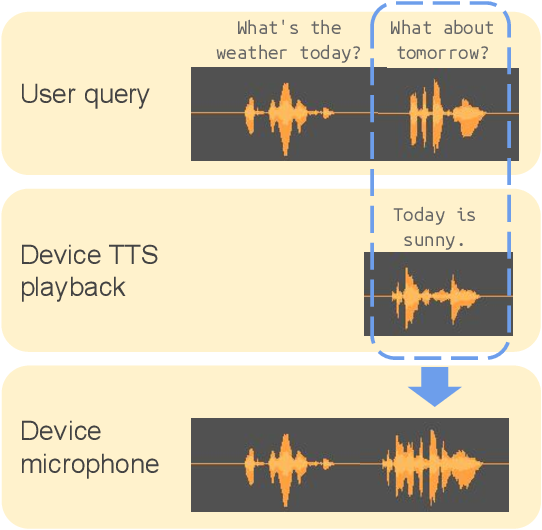 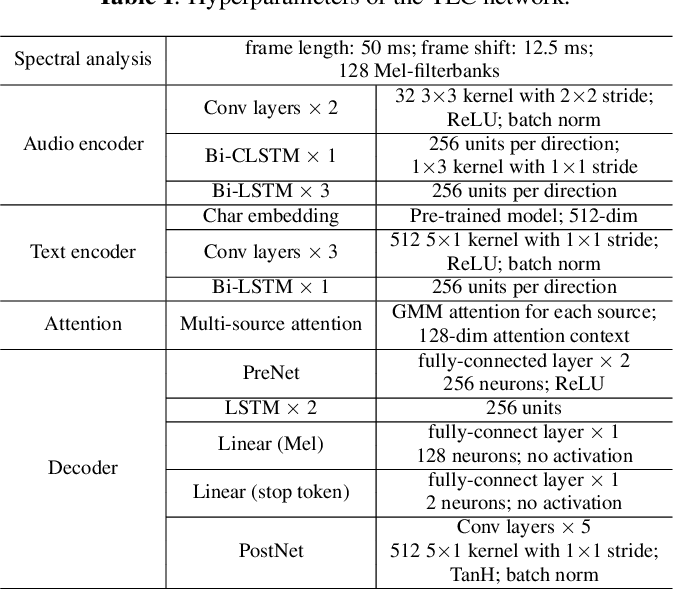 In this paper, we propose Textual Echo Cancellation (TEC) - a framework for cancelling the text-to-speech (TTS) playback echo from overlapped speech recordings. Such a system can largely improve speech recognition performance and user experience for intelligent devices such as smart speakers, as the user can talk to the device while the device is still playing the TTS signal responding to the previous query. We implement this system by using a novel sequence-to-sequence model with multi-source attention that takes both the microphone mixture signal and the source text of the TTS playback as inputs, and predicts the enhanced audio. Experiments show that the textual information of the TTS playback is critical to the enhancement performance. Besides, the text sequence is much smaller in size compared with the raw acoustic signal of the TTS playback, and can be immediately transmitted to the device and the ASR server even before the playback is synthesized. Therefore, our proposed approach effectively reduces Internet communication and latency compared with alternative approaches such as acoustic echo cancellation (AEC). 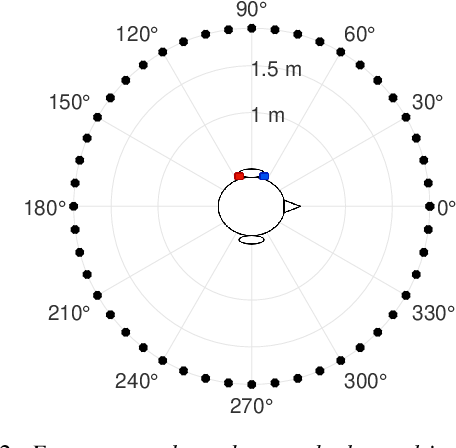 Keyword spotting (KWS) is experiencing an upswing due to the pervasiveness of small electronic devices that allow interaction with them via speech. Often, KWS systems are speaker-independent, which means that any person --user or not-- might trigger them. For applications like KWS for hearing assistive devices this is unacceptable, as only the user must be allowed to handle them. In this paper we propose KWS for hearing assistive devices that is robust to external speakers. A state-of-the-art deep residual network for small-footprint KWS is regarded as a basis to build upon. By following a multi-task learning scheme, this system is extended to jointly perform KWS and users' own-voice/external speaker detection with a negligible increase in the number of parameters. For experiments, we generate from the Google Speech Commands Dataset a speech corpus emulating hearing aids as a capturing device. Our results show that this multi-task deep residual network is able to achieve a KWS accuracy relative improvement of around 32% with respect to a system that does not deal with external speakers. 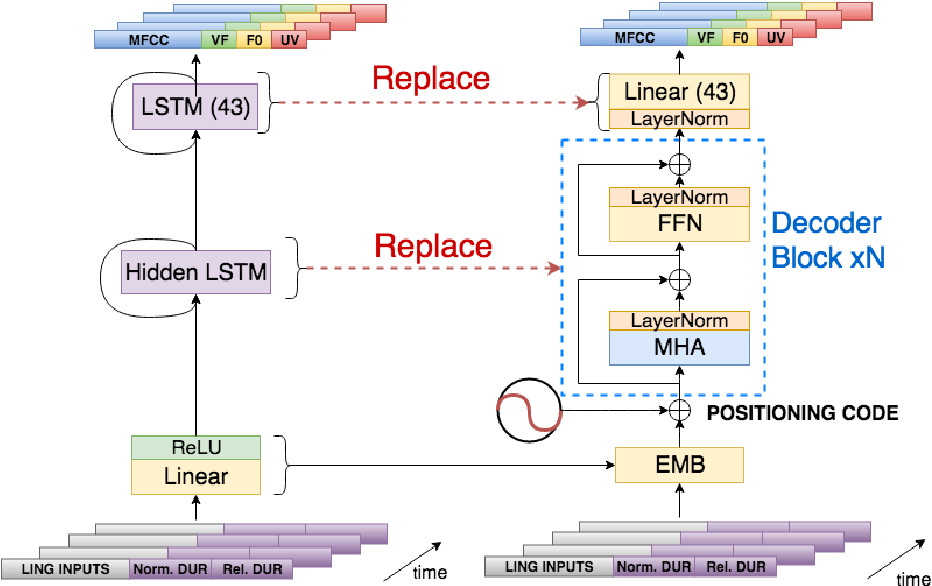 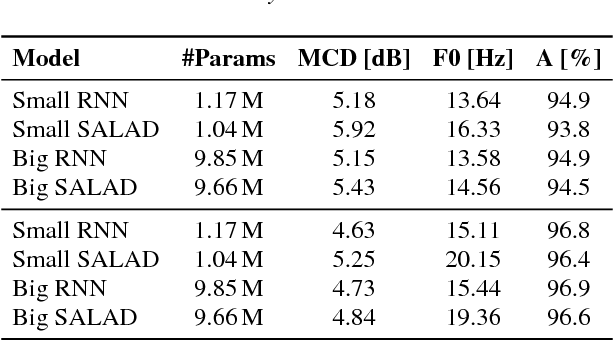 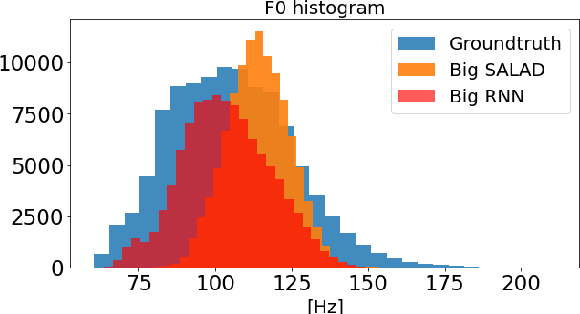 The conversion from text to speech relies on the accurate mapping from linguistic to acoustic symbol sequences, for which current practice employs recurrent statistical models like recurrent neural networks. Despite the good performance of such models (in terms of low distortion in the generated speech), their recursive structure tends to make them slow to train and to sample from. In this work, we try to overcome the limitations of recursive structure by using a module based on the transformer decoder network, designed without recurrent connections but emulating them with attention and positioning codes. Our results show that the proposed decoder network is competitive in terms of distortion when compared to a recurrent baseline, whilst being significantly faster in terms of CPU inference time. On average, it increases Mel cepstral distortion between 0.1 and 0.3 dB, but it is over an order of magnitude faster on average. Fast inference is important for the deployment of speech synthesis systems on devices with restricted resources, like mobile phones or embedded systems, where speaking virtual assistants are gaining importance.

Human and Machine Speaker Recognition Based on Short Trivial Events 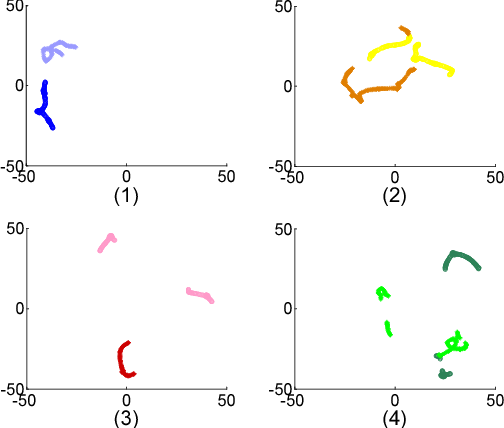 Trivial events are ubiquitous in human to human conversations, e.g., cough, laugh and sniff. Compared to regular speech, these trivial events are usually short and unclear, thus generally regarded as not speaker discriminative and so are largely ignored by present speaker recognition research. However, these trivial events are highly valuable in some particular circumstances such as forensic examination, as they are less subjected to intentional change, so can be used to discover the genuine speaker from disguised speech. In this paper, we collect a trivial event speech database that involves 75 speakers and 6 types of events, and report preliminary speaker recognition results on this database, by both human listeners and machines. Particularly, the deep feature learning technique recently proposed by our group is utilized to analyze and recognize the trivial events, which leads to acceptable equal error rates (EERs) despite the extremely short durations (0.2-0.5 seconds) of these events. Comparing different types of events, 'hmm' seems more speaker discriminative. 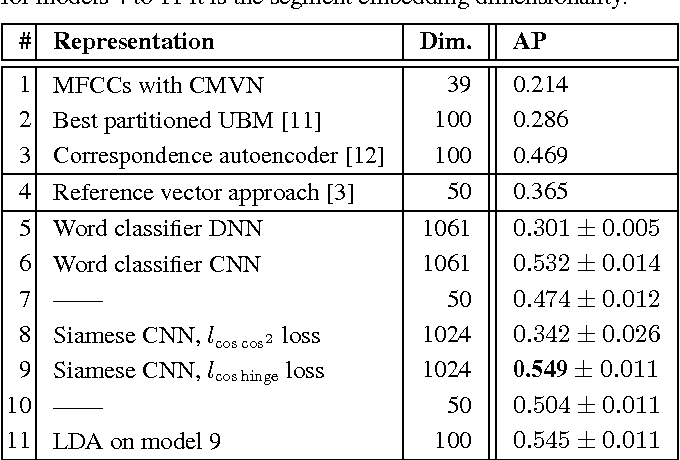 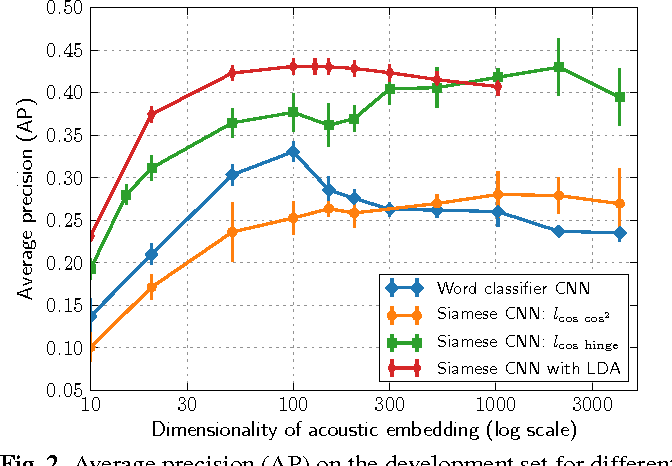 Recent studies have been revisiting whole words as the basic modelling unit in speech recognition and query applications, instead of phonetic units. Such whole-word segmental systems rely on a function that maps a variable-length speech segment to a vector in a fixed-dimensional space; the resulting acoustic word embeddings need to allow for accurate discrimination between different word types, directly in the embedding space. We compare several old and new approaches in a word discrimination task. Our best approach uses side information in the form of known word pairs to train a Siamese convolutional neural network (CNN): a pair of tied networks that take two speech segments as input and produce their embeddings, trained with a hinge loss that separates same-word pairs and different-word pairs by some margin. A word classifier CNN performs similarly, but requires much stronger supervision. Both types of CNNs yield large improvements over the best previously published results on the word discrimination task.

This paper describes a natural language parsing algorithm for unrestricted text which uses a probability-based scoring function to select the "best" parse of a sentence. The parser, Pearl, is a time-asynchronous bottom-up chart parser with Earley-type top-down prediction which pursues the highest-scoring theory in the chart, where the score of a theory represents the extent to which the context of the sentence predicts that interpretation. This parser differs from previous attempts at stochastic parsers in that it uses a richer form of conditional probabilities based on context to predict likelihood. Pearl also provides a framework for incorporating the results of previous work in part-of-speech assignment, unknown word models, and other probabilistic models of linguistic features into one parsing tool, interleaving these techniques instead of using the traditional pipeline architecture. In preliminary tests, Pearl has been successful at resolving part-of-speech and word (in speech processing) ambiguity, determining categories for unknown words, and selecting correct parses first using a very loosely fitting covering grammar. 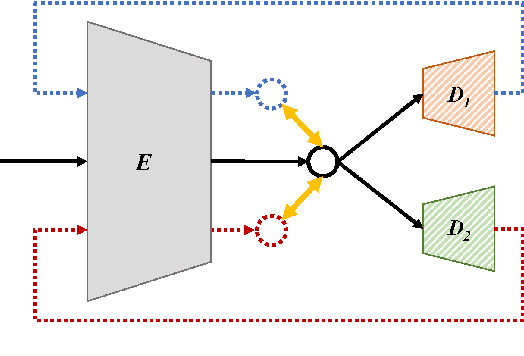 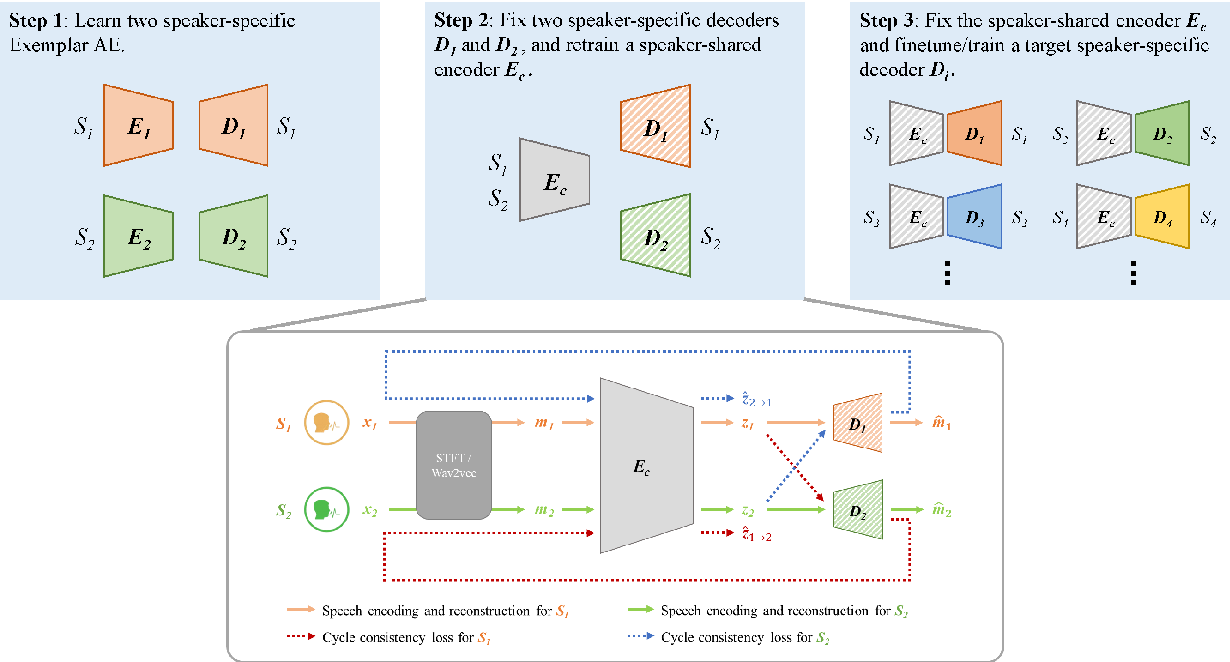 Recent research showed that an autoencoder trained with speech of a single speaker, called exemplar autoencoder (eAE), can be used for any-to-one voice conversion (VC). Compared to large-scale many-to-many models such as AutoVC, the eAE model is easy and fast in training, and may recover more details of the target speaker. To ensure VC quality, the latent code should represent and only represent content information. However, this is not easy to attain for eAE as it is unaware of any speaker variation in model training. To tackle the problem, we propose a simple yet effective approach based on a cycle consistency loss. Specifically, we train eAEs of multiple speakers with a shared encoder, and meanwhile encourage the speech reconstructed from any speaker-specific decoder to get a consistent latent code as the original speech when cycled back and encoded again. Experiments conducted on the AISHELL-3 corpus showed that this new approach improved the baseline eAE consistently. The source code and examples are available at the project page: http://project.cslt.org/. 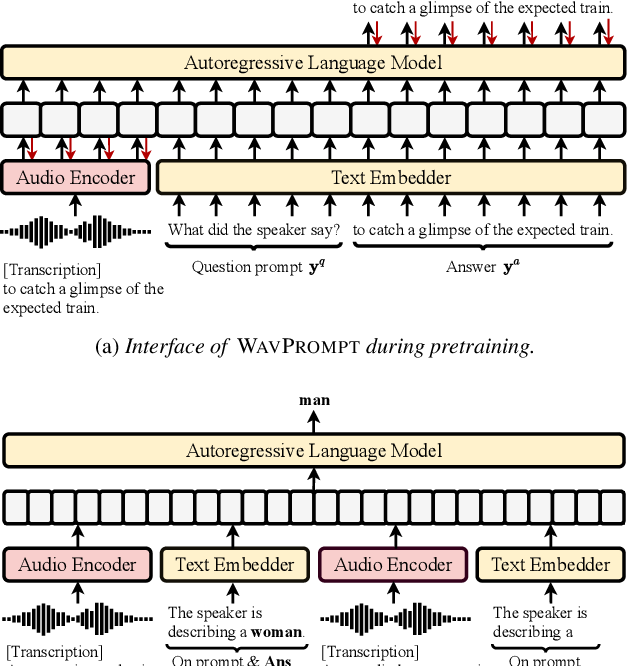 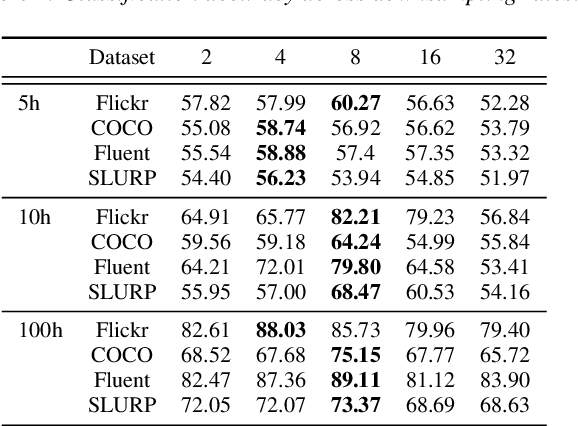 Large-scale auto-regressive language models pretrained on massive text have demonstrated their impressive ability to perform new natural language tasks with only a few text examples, without the need for fine-tuning. Recent studies further show that such a few-shot learning ability can be extended to the text-image setting by training an encoder to encode the images into embeddings functioning like the text embeddings of the language model. Interested in exploring the possibility of transferring the few-shot learning ability to the audio-text setting, we propose a novel speech understanding framework, WavPrompt, where we finetune a wav2vec model to generate a sequence of audio embeddings understood by the language model. We show that WavPrompt is a few-shot learner that can perform speech understanding tasks better than a naive text baseline. We conduct detailed ablation studies on different components and hyperparameters to empirically identify the best model configuration. In addition, we conduct a non-speech understanding experiment to show WavPrompt can extract more information than just the transcriptions. 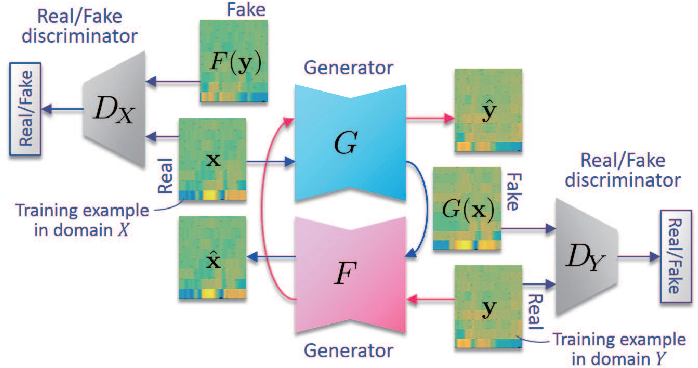 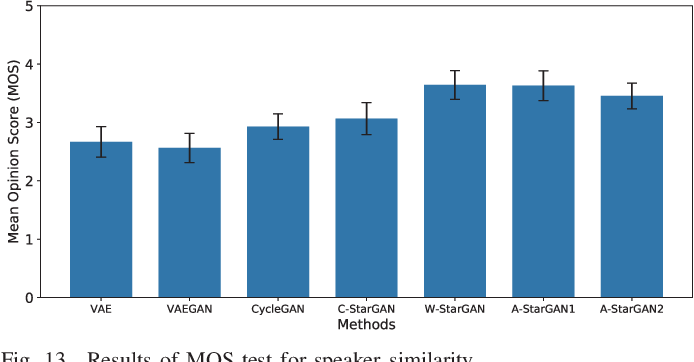 We previously proposed a method that allows for non-parallel voice conversion (VC) by using a variant of generative adversarial networks (GANs) called StarGAN. The main features of our method, called StarGAN-VC, are as follows: First, it requires no parallel utterances, transcriptions, or time alignment procedures for speech generator training. Second, it can simultaneously learn mappings across multiple domains using a single generator network so that it can fully exploit available training data collected from multiple domains to capture latent features that are common to all the domains. Third, it is able to generate converted speech signals quickly enough to allow real-time implementations and requires only several minutes of training examples to generate reasonably realistic-sounding speech. In this paper, we describe three formulations of StarGAN, including a newly introduced novel StarGAN variant called "Augmented classifier StarGAN (A-StarGAN)", and compare them in a non-parallel VC task. We also compare them with several baseline methods.