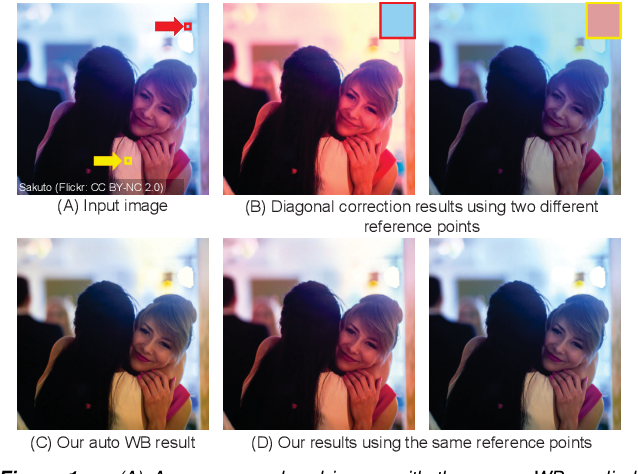 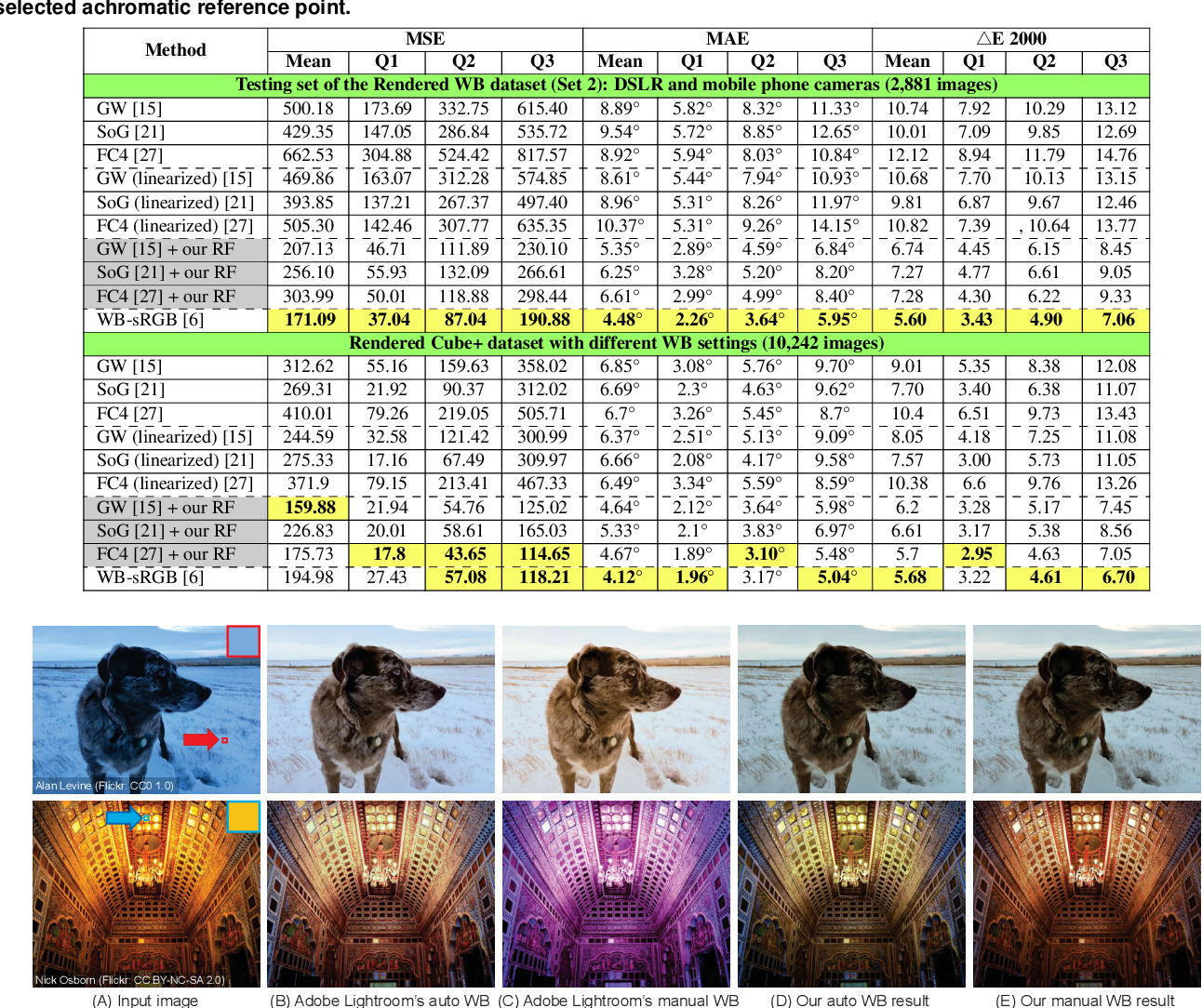 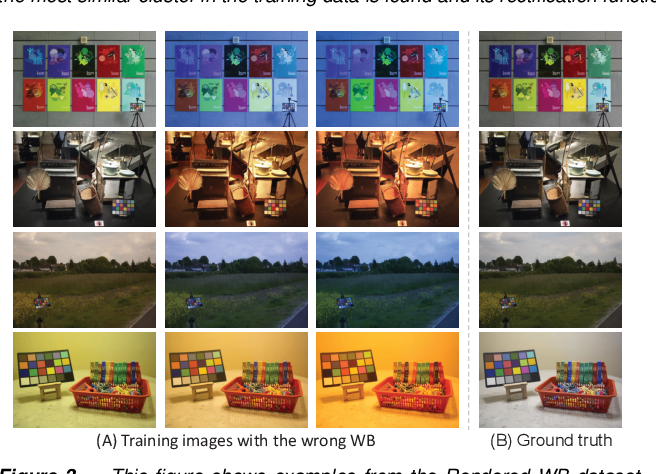 White balance (WB) is one of the first photo-finishing steps used to render a captured image to its final output. WB is applied to remove the color cast caused by the scene's illumination. Interactive photo-editing software allows users to manually select different regions in a photo as examples of the illumination for WB correction (e.g., clicking on achromatic objects). Such interactive editing is possible only with images saved in a RAW image format. This is because RAW images have no photo-rendering operations applied and photo-editing software is able to apply WB and other photo-finishing procedures to render the final image. Interactively editing WB in camera-rendered images is significantly more challenging. This is because the camera hardware has already applied WB to the image and subsequent nonlinear photo-processing routines. These nonlinear rendering operations make it difficult to change the WB post-capture. The goal of this paper is to allow interactive WB manipulation of camera-rendered images. The proposed method is an extension of our recent work \cite{afifi2019color} that proposed a post-capture method for WB correction based on nonlinear color-mapping functions. Here, we introduce a new framework that links the nonlinear color-mapping functions directly to user-selected colors to enable {\it interactive} WB manipulation. This new framework is also more efficient in terms of memory and run-time (99\% reduction in memory and 3$\times$ speed-up). Lastly, we describe how our framework can leverage a simple illumination estimation method (i.e., gray-world) to perform auto-WB correction that is on a par with the WB correction results in \cite{afifi2019color}. The source code is publicly available at https://github.com/mahmoudnafifi/Interactive_WB_correction. 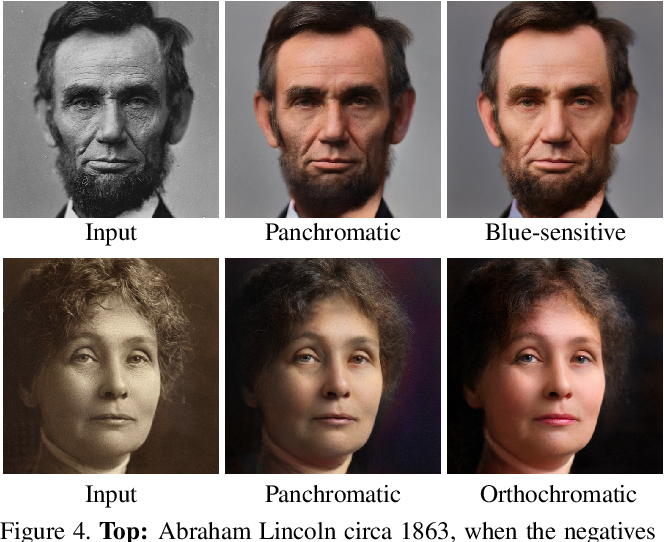 Many historical people are captured only in old, faded, black and white photos, that have been distorted by the limitations of early cameras and the passage of time. This paper simulates traveling back in time with a modern camera to rephotograph famous subjects. Unlike conventional image restoration filters which apply independent operations like denoising, colorization, and superresolution, we leverage the StyleGAN2 framework to project old photos into the space of modern high-resolution photos, achieving all of these effects in a unified framework. A unique challenge with this approach is capturing the identity and pose of the photo's subject and not the many artifacts in low-quality antique photos. Our comparisons to current state-of-the-art restoration filters show significant improvements and compelling results for a variety of important historical people.

Neural Rerendering in the Wild 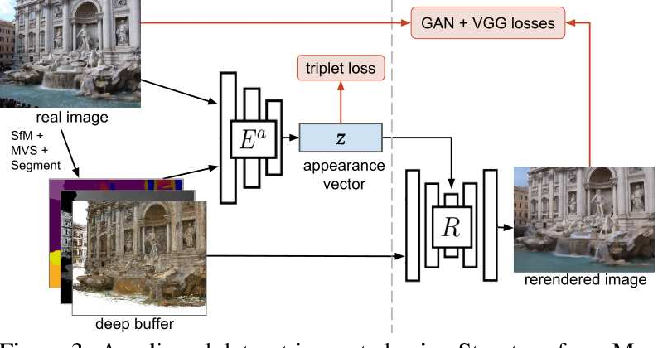 We explore total scene capture -- recording, modeling, and rerendering a scene under varying appearance such as season and time of day. Starting from internet photos of a tourist landmark, we apply traditional 3D reconstruction to register the photos and approximate the scene as a point cloud. For each photo, we render the scene points into a deep framebuffer, and train a neural network to learn the mapping of these initial renderings to the actual photos. This rerendering network also takes as input a latent appearance vector and a semantic mask indicating the location of transient objects like pedestrians. The model is evaluated on several datasets of publicly available images spanning a broad range of illumination conditions. We create short videos demonstrating realistic manipulation of the image viewpoint, appearance, and semantic labeling. We also compare results with prior work on scene reconstruction from internet photos.


* To be presented at CVPR 2019 (oral). Supplementary video available at http://youtu.be/E1crWQn_kmY 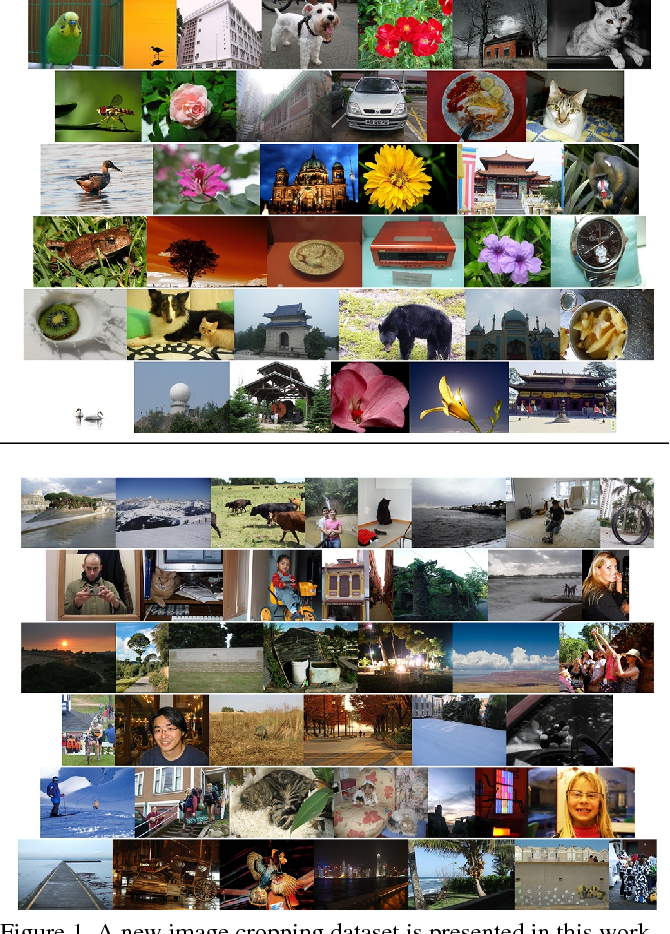 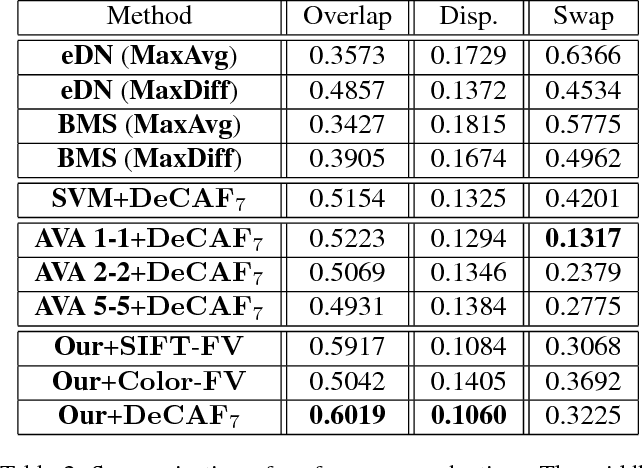 Automatic photo cropping is an important tool for improving visual quality of digital photos without resorting to tedious manual selection. Traditionally, photo cropping is accomplished by determining the best proposal window through visual quality assessment or saliency detection. In essence, the performance of an image cropper highly depends on the ability to correctly rank a number of visually similar proposal windows. Despite the ranking nature of automatic photo cropping, little attention has been paid to learning-to-rank algorithms in tackling such a problem. In this work, we conduct an extensive study on traditional approaches as well as ranking-based croppers trained on various image features. In addition, a new dataset consisting of high quality cropping and pairwise ranking annotations is presented to evaluate the performance of various baselines. The experimental results on the new dataset provide useful insights into the design of better photo cropping algorithms.


* The dataset presented in this article can be found on Github

State of the Art on Neural Rendering 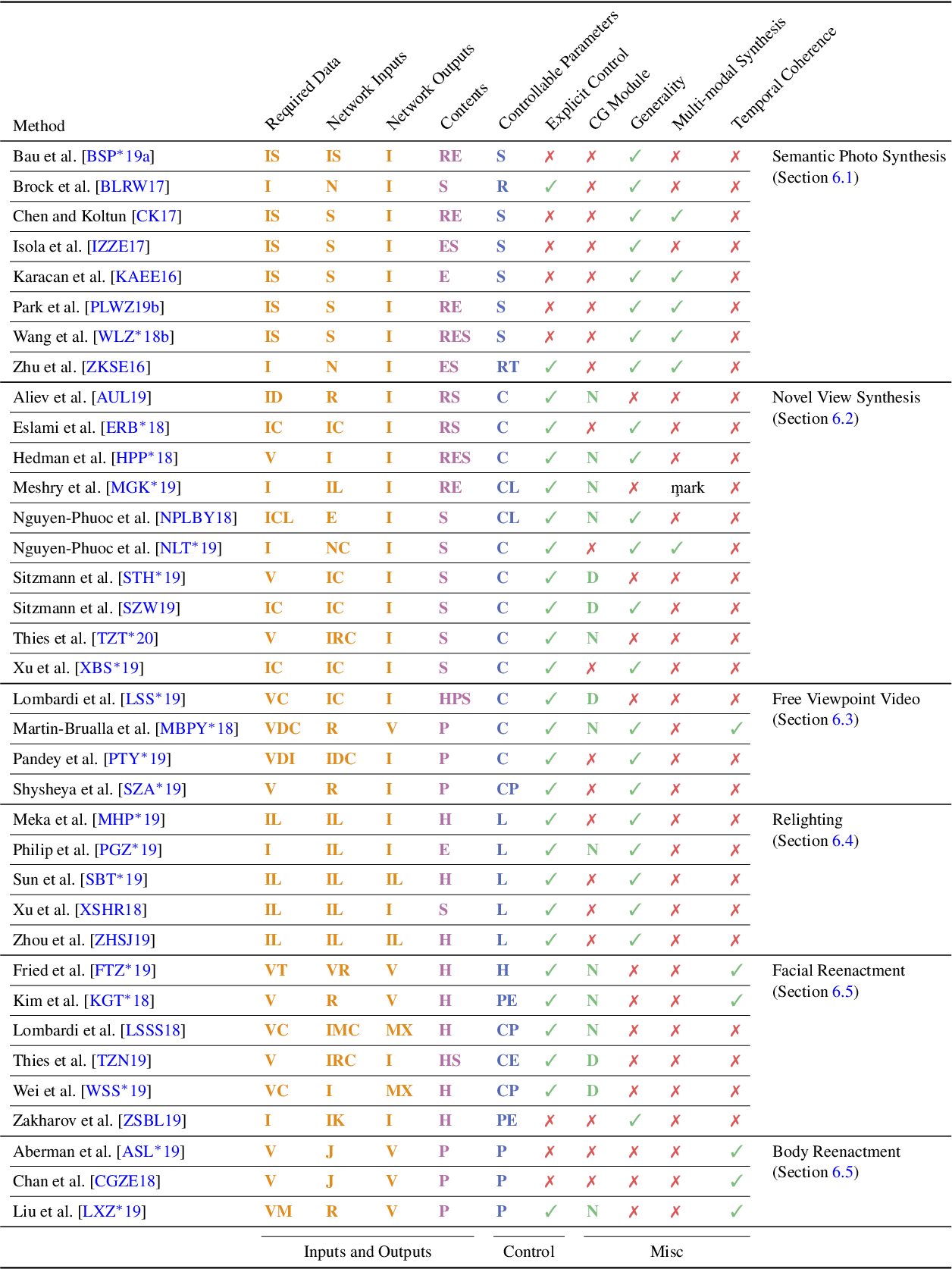 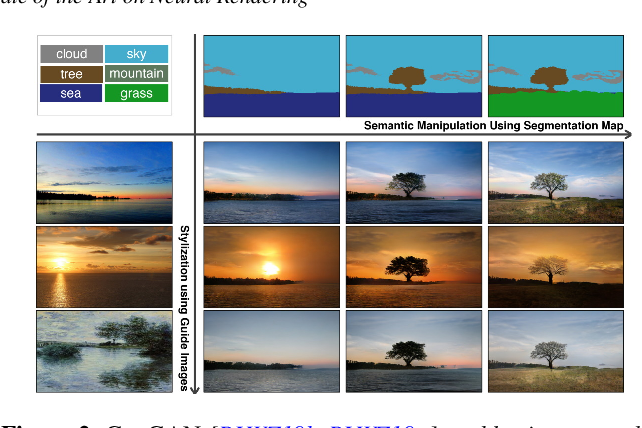 Efficient rendering of photo-realistic virtual worlds is a long standing effort of computer graphics. Modern graphics techniques have succeeded in synthesizing photo-realistic images from hand-crafted scene representations. However, the automatic generation of shape, materials, lighting, and other aspects of scenes remains a challenging problem that, if solved, would make photo-realistic computer graphics more widely accessible. Concurrently, progress in computer vision and machine learning have given rise to a new approach to image synthesis and editing, namely deep generative models. Neural rendering is a new and rapidly emerging field that combines generative machine learning techniques with physical knowledge from computer graphics, e.g., by the integration of differentiable rendering into network training. With a plethora of applications in computer graphics and vision, neural rendering is poised to become a new area in the graphics community, yet no survey of this emerging field exists. This state-of-the-art report summarizes the recent trends and applications of neural rendering. We focus on approaches that combine classic computer graphics techniques with deep generative models to obtain controllable and photo-realistic outputs. Starting with an overview of the underlying computer graphics and machine learning concepts, we discuss critical aspects of neural rendering approaches. This state-of-the-art report is focused on the many important use cases for the described algorithms such as novel view synthesis, semantic photo manipulation, facial and body reenactment, relighting, free-viewpoint video, and the creation of photo-realistic avatars for virtual and augmented reality telepresence. Finally, we conclude with a discussion of the social implications of such technology and investigate open research problems. 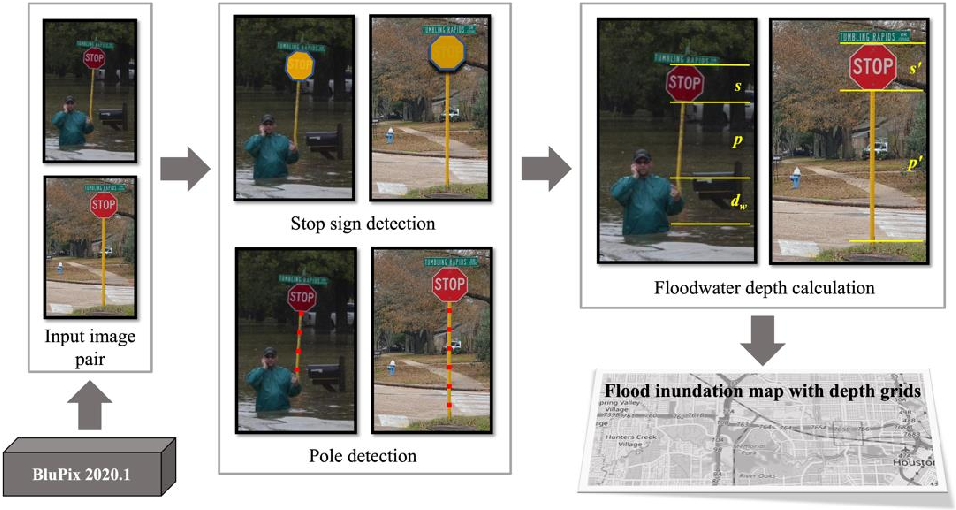 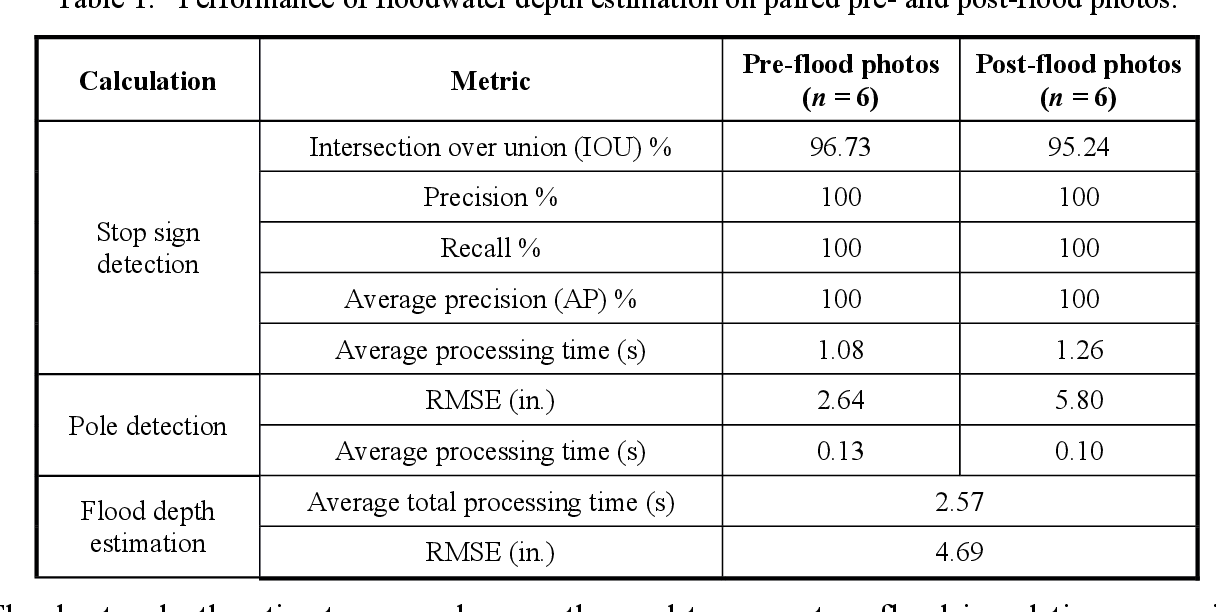 Water events are the most frequent and costliest climate disasters around the world. In the U.S., an estimated 127 million people who live in coastal areas are at risk of substantial home damage from hurricanes or flooding. In flood emergency management, timely and effective spatial decision-making and intelligent routing depend on flood depth information at a fine spatiotemporal scale. In this paper, crowdsourcing is utilized to collect photos of submerged stop signs, and pair each photo with a pre-flood photo taken at the same location. Each photo pair is then analyzed using deep neural network and image processing to estimate the depth of floodwater in the location of the photo. Generated point-by-point depth data is converted to a flood inundation map and used by an A* search algorithm to determine an optimal flood-free path connecting points of interest. Results provide crucial information to rescue teams and evacuees by enabling effective wayfinding during flooding events. 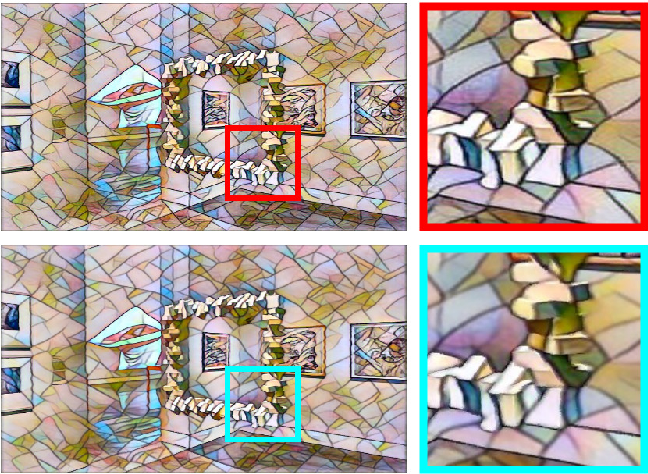 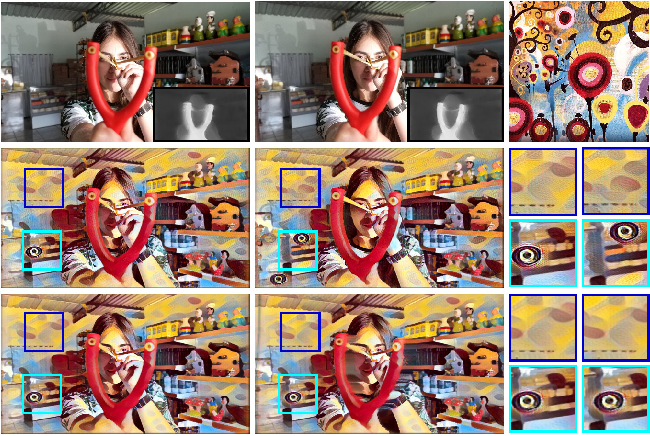 An estimated 60% of smartphones sold in 2018 were equipped with multiple rear cameras, enabling a wide variety of 3D-enabled applications such as 3D Photos. The success of 3D Photo platforms (Facebook 3D Photo, Holopix, etc) depend on a steady influx of user generated content. These platforms must provide simple image manipulation tools to facilitate content creation, akin to traditional photo platforms. Artistic neural style transfer, propelled by recent advancements in GPU technology, is one such tool for enhancing traditional photos. However, naively extrapolating single-view neural style transfer to the multi-view scenario produces visually inconsistent results and is prohibitively slow on mobile devices. We present a GPU-accelerated multi-view style transfer pipeline which enforces style consistency between views with on-demand performance on mobile platforms. Our pipeline is modular and creates high quality depth and parallax effects from a stereoscopic image pair.

Instagram has become a great venue for amateur and professional photographers alike to showcase their work. It has, in other words, democratized photography. Generally, photographers take thousands of photos in a session, from which they pick a few to showcase their work on Instagram. Photographers trying to build a reputation on Instagram have to strike a balance between maximizing their followers' engagement with their photos, while also maintaining their artistic style. We used transfer learning to adapt Xception, which is a model for object recognition trained on the ImageNet dataset, to the task of engagement prediction and utilized Gram matrices generated from VGG19, another object recognition model trained on ImageNet, for the task of style similarity measurement on photos posted on Instagram. Our models can be trained on individual Instagram accounts to create personalized engagement prediction and style similarity models. Once trained on their accounts, users can have new photos sorted based on predicted engagement and style similarity to their previous work, thus enabling them to upload photos that not only have the potential to maximize engagement from their followers but also maintain their style of photography. We trained and validated our models on several Instagram accounts, showing it to be adept at both tasks, also outperforming several baseline models and human annotators.


* Proceedings of the 2020 International Conference on Multimedia Retrieval. 2020 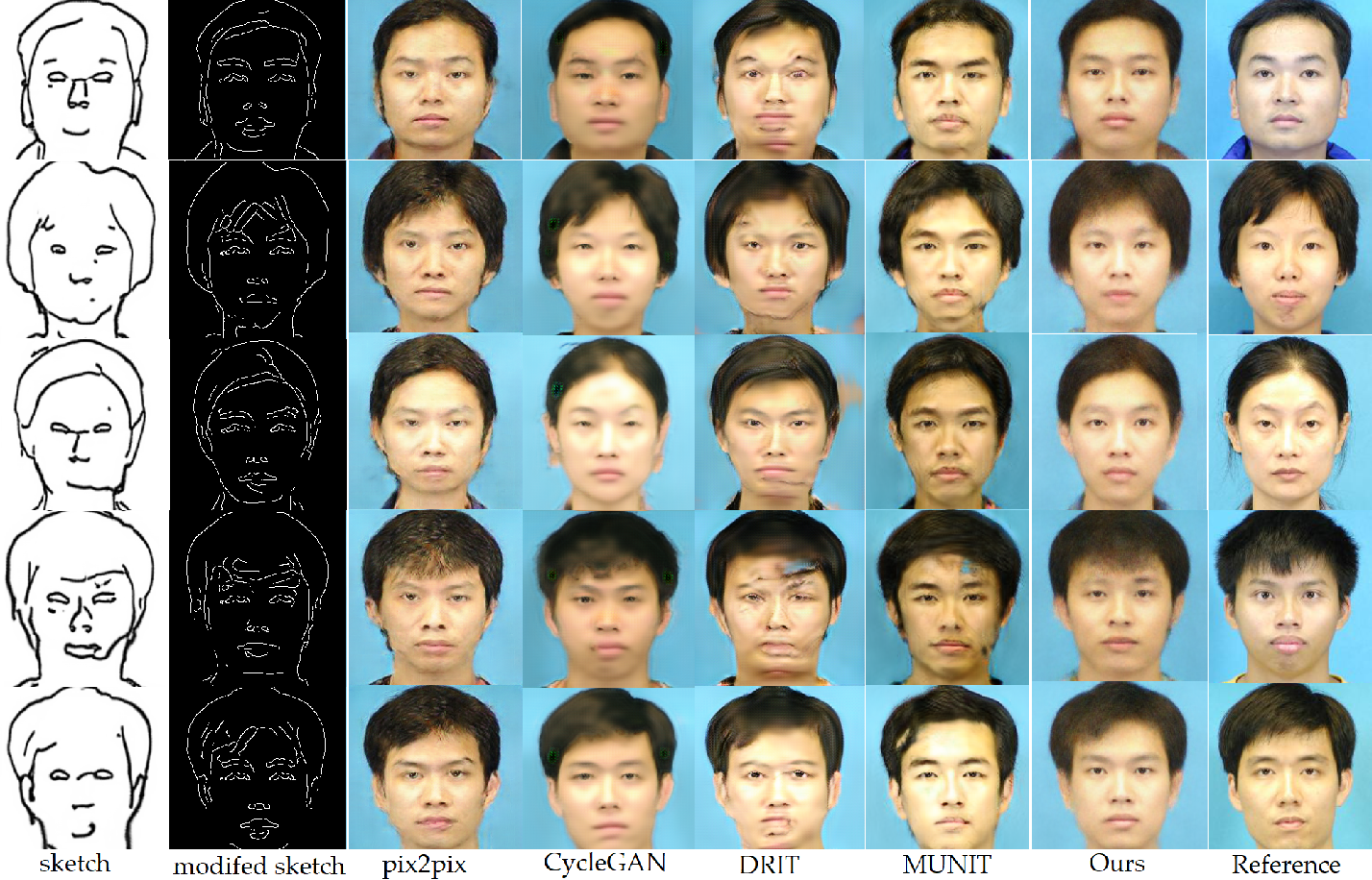 Image generation task has received increasing attention because of its wide application in security and entertainment. Sketch-based face generation brings more fun and better quality of image generation due to supervised interaction. However, When a sketch poorly aligned with the true face is given as input, existing supervised image-to-image translation methods often cannot generate acceptable photo-realistic face images. To address this problem, in this paper we propose Cali-Sketch, a poorly-drawn-sketch to photo-realistic-image generation method. Cali-Sketch explicitly models stroke calibration and image generation using two constituent networks: a Stroke Calibration Network (SCN), which calibrates strokes of facial features and enriches facial details while preserving the original intent features; and an Image Synthesis Network (ISN), which translates the calibrated and enriched sketches to photo-realistic face images. In this way, we manage to decouple a difficult cross-domain translation problem into two easier steps. Extensive experiments verify that the face photos generated by Cali-Sketch are both photo-realistic and faithful to the input sketches, compared with state-of-the-art methods