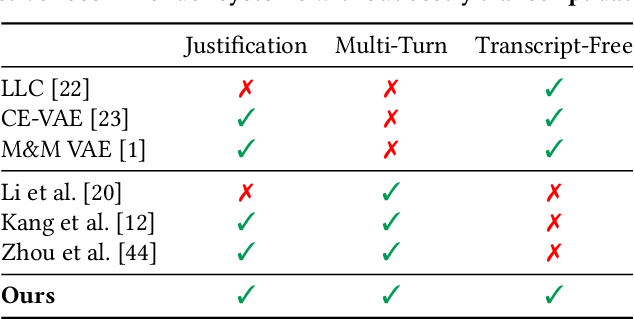 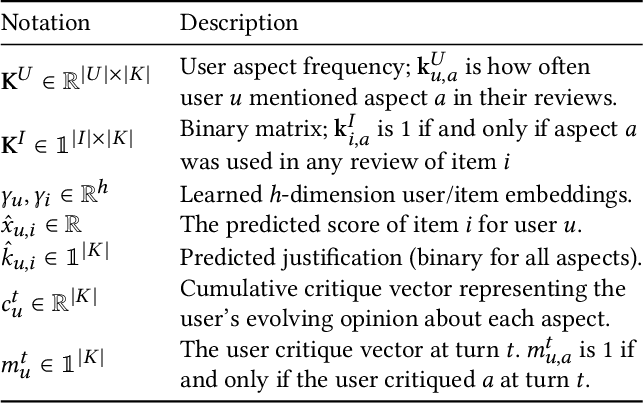 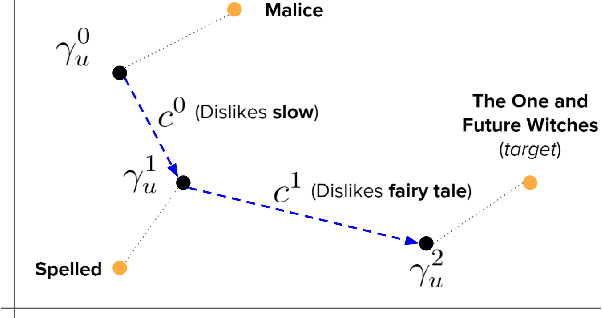 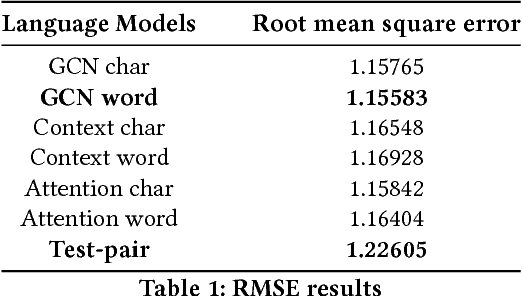 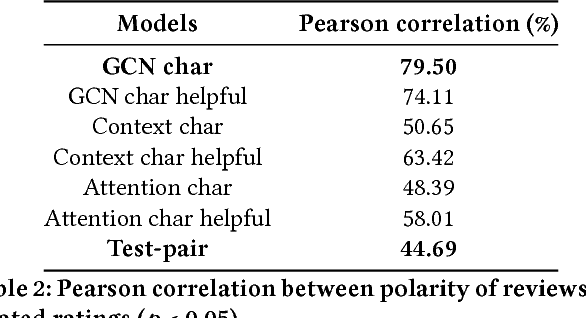 An important task for a recommender system to provide interpretable explanations for the user. This is important for the credibility of the system. Current interpretable recommender systems tend to focus on certain features known to be important to the user and offer their explanations in a structured form. It is well known that user generated reviews and feedback from reviewers have strong leverage over the users' decisions. On the other hand, recent text generation works have been shown to generate text of similar quality to human written text, and we aim to show that generated text can be successfully used to explain recommendations. In this paper, we propose a framework consisting of popular review-oriented generation models aiming to create personalised explanations for recommendations. The interpretations are generated at both character and word levels. We build a dataset containing reviewers' feedback from the Amazon books review dataset. Our cross-domain experiments are designed to bridge from natural language processing to the recommender system domain. Besides language model evaluation methods, we employ DeepCoNN, a novel review-oriented recommender system using a deep neural network, to evaluate the recommendation performance of generated reviews by root mean square error (RMSE). We demonstrate that the synthetic personalised reviews have better recommendation performance than human written reviews. To our knowledge, this presents the first machine-generated natural language explanations for rating prediction.

QuoteR: A Benchmark of Quote Recommendation for Writing 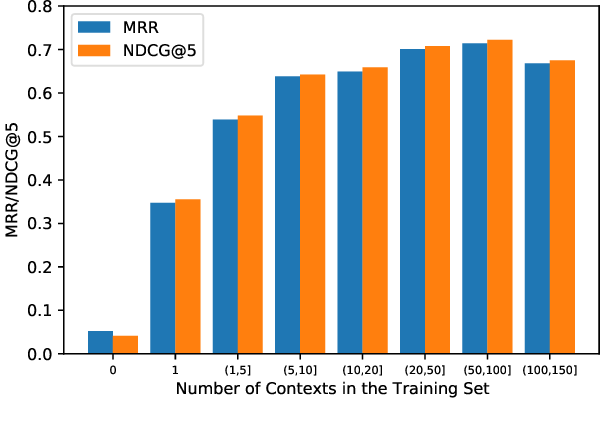 It is very common to use quotations (quotes) to make our writings more elegant or convincing. To help people find appropriate quotes efficiently, the task of quote recommendation is presented, aiming to recommend quotes that fit the current context of writing. There have been various quote recommendation approaches, but they are evaluated on different unpublished datasets. To facilitate the research on this task, we build a large and fully open quote recommendation dataset called QuoteR, which comprises three parts including English, standard Chinese and classical Chinese. Any part of it is larger than previous unpublished counterparts. We conduct an extensive evaluation of existing quote recommendation methods on QuoteR. Furthermore, we propose a new quote recommendation model that significantly outperforms previous methods on all three parts of QuoteR. All the code and data of this paper are available at https://github.com/thunlp/QuoteR.


* Accepted by the main conference of ACL 2022 as a long paper. The camera-ready version 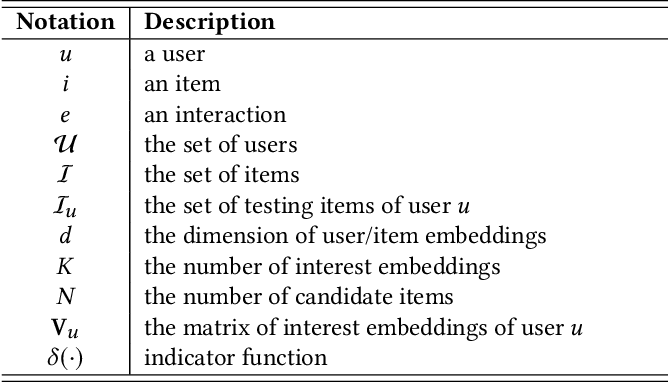 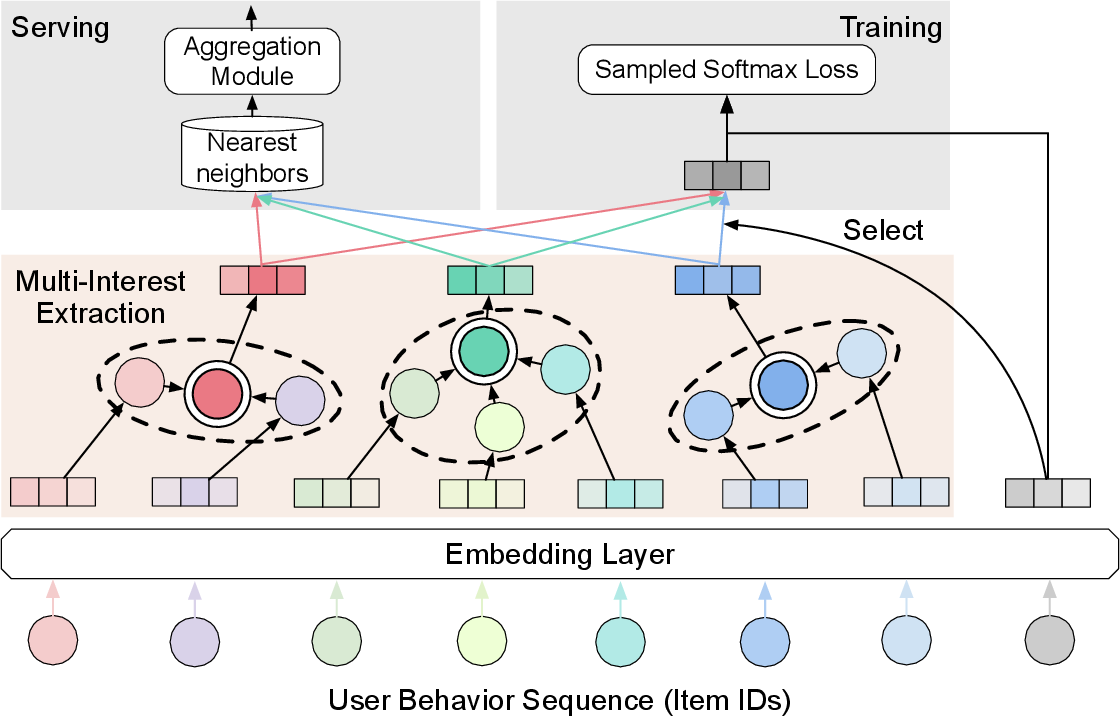 Recently, neural networks have been widely used in e-commerce recommender systems, owing to the rapid development of deep learning. We formalize the recommender system as a sequential recommendation problem, intending to predict the next items that the user might be interacted with. Recent works usually give an overall embedding from a user's behavior sequence. However, a unified user embedding cannot reflect the user's multiple interests during a period. In this paper, we propose a novel controllable multi-interest framework for the sequential recommendation, called ComiRec. Our multi-interest module captures multiple interests from user behavior sequences, which can be exploited for retrieving candidate items from the large-scale item pool. These items are then fed into an aggregation module to obtain the overall recommendation. The aggregation module leverages a controllable factor to balance the recommendation accuracy and diversity. We conduct experiments for the sequential recommendation on two real-world datasets, Amazon and Taobao. Experimental results demonstrate that our framework achieves significant improvements over state-of-the-art models. Our framework has also been successfully deployed on the offline Alibaba distributed cloud platform.

Towards Content Provider Aware Recommender Systems: A Simulation Study on the Interplay between User and Provider Utilities 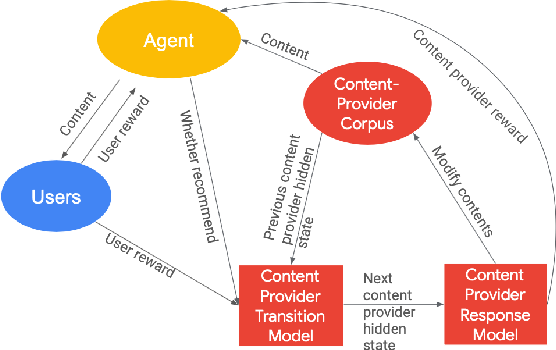 Most existing recommender systems focus primarily on matching users to content which maximizes user satisfaction on the platform. It is increasingly obvious, however, that content providers have a critical influence on user satisfaction through content creation, largely determining the content pool available for recommendation. A natural question thus arises: can we design recommenders taking into account the long-term utility of both users and content providers? By doing so, we hope to sustain more providers and a more diverse content pool for long-term user satisfaction. Understanding the full impact of recommendations on both user and provider groups is challenging. This paper aims to serve as a research investigation of one approach toward building a provider-aware recommender, and evaluating its impact in a simulated setup. To characterize the user-recommender-provider interdependence, we complement user modeling by formalizing provider dynamics as well. The resulting joint dynamical system gives rise to a weakly-coupled partially observable Markov decision process driven by recommender actions and user feedback to providers. We then build a REINFORCE recommender agent, coined EcoAgent, to optimize a joint objective of user utility and the counterfactual utility lift of the provider associated with the recommended content, which we show to be equivalent to maximizing overall user utility and the utilities of all providers on the platform under some mild assumptions. To evaluate our approach, we introduce a simulation environment capturing the key interactions among users, providers, and the recommender. We offer a number of simulated experiments that shed light on both the benefits and the limitations of our approach. These results help understand how and when a provider-aware recommender agent is of benefit in building multi-stakeholder recommender systems.

D2RLIR : an improved and diversified ranking function in interactive recommendation systems based on deep reinforcement learning 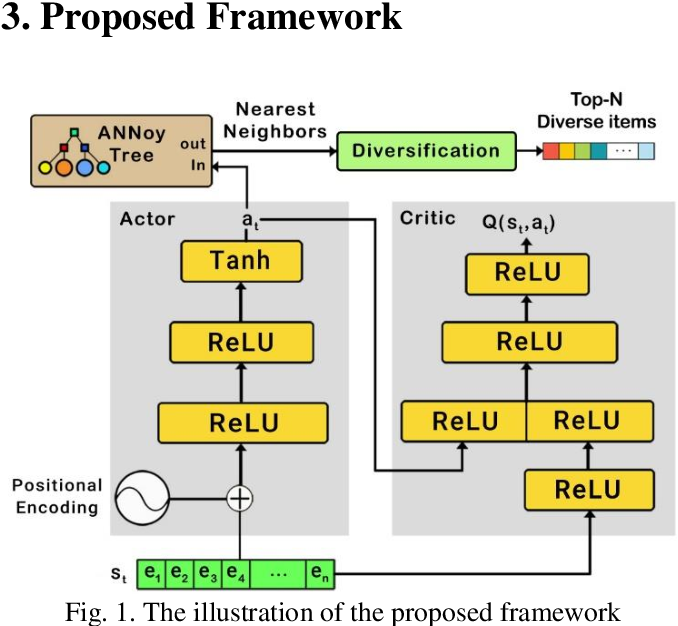 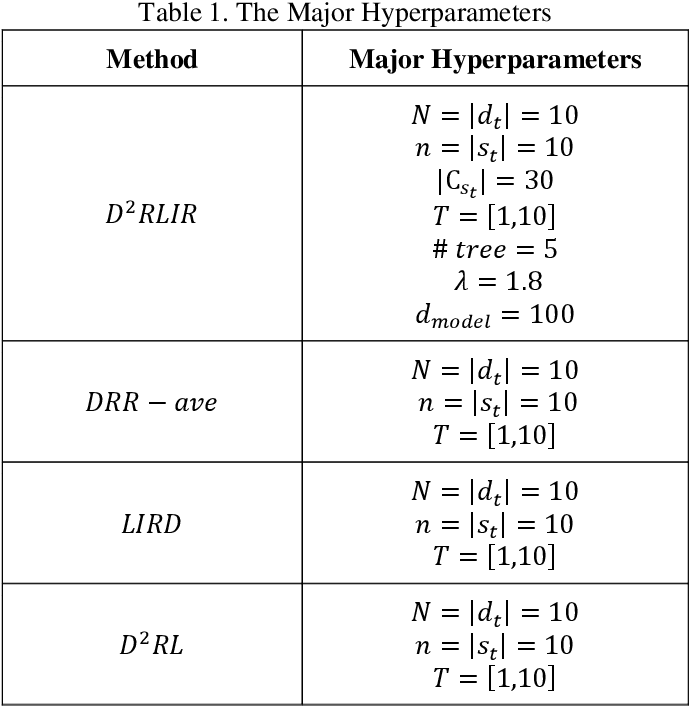 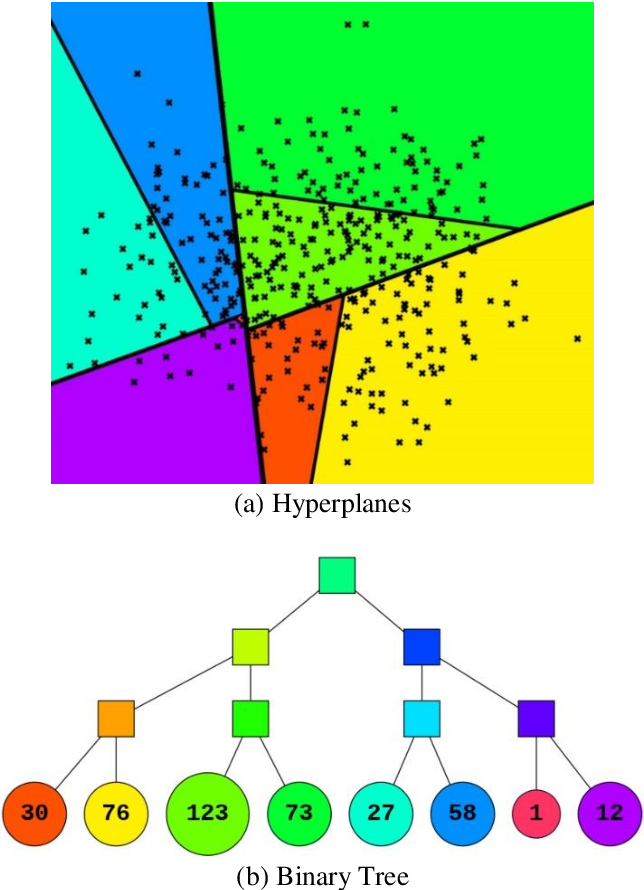 Recently, interactive recommendation systems based on reinforcement learning have been attended by researchers due to the consider recommendation procedure as a dynamic process and update the recommendation model based on immediate user feedback, which is neglected in traditional methods. The existing works have two significant drawbacks. Firstly, inefficient ranking function to produce the Top-N recommendation list. Secondly, focusing on recommendation accuracy and inattention to other evaluation metrics such as diversity. This paper proposes a deep reinforcement learning based recommendation system by utilizing Actor-Critic architecture to model dynamic users' interaction with the recommender agent and maximize the expected long-term reward. Furthermore, we propose utilizing Spotify's ANNoy algorithm to find the most similar items to generated action by actor-network. After that, the Total Diversity Effect Ranking algorithm is used to generate the recommendations concerning relevancy and diversity. Moreover, we apply positional encoding to compute representations of the user's interaction sequence without using sequence-aligned recurrent neural networks. Extensive experiments on the MovieLens dataset demonstrate that our proposed model is able to generate a diverse while relevance recommendation list based on the user's preferences. 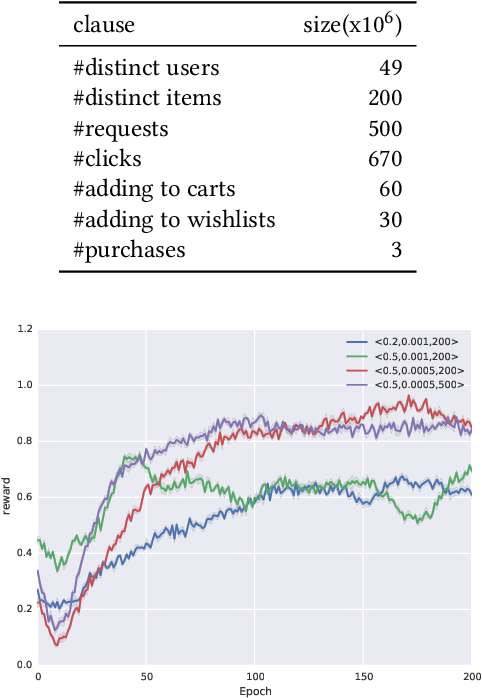 Existing recommendation algorithms mostly focus on optimizing traditional recommendation measures, such as the accuracy of rating prediction in terms of RMSE or the quality of top-$k$ recommendation lists in terms of precision, recall, MAP, etc. However, an important expectation for commercial recommendation systems is to improve the final revenue/profit of the system. Traditional recommendation targets such as rating prediction and top-$k$ recommendation are not directly related to this goal. In this work, we blend the fundamental concepts in online advertising and micro-economics into personalized recommendation for profit maximization. Specifically, we propose value-aware recommendation based on reinforcement learning, which directly optimizes the economic value of candidate items to generate the recommendation list. In particular, we generalize the basic concept of click conversion rate (CVR) in computational advertising into the conversation rate of an arbitrary user action (XVR) in E-commerce, where the user actions can be clicking, adding to cart, adding to wishlist, etc. In this way, each type of user action is mapped to its monetized economic value. Economic values of different user actions are further integrated as the reward of a ranking list, and reinforcement learning is used to optimize the recommendation list for the maximum total value. Experimental results in both offline benchmarks and online commercial systems verified the improved performance of our framework, in terms of both traditional top-$k$ ranking tasks and the economic profits of the system. 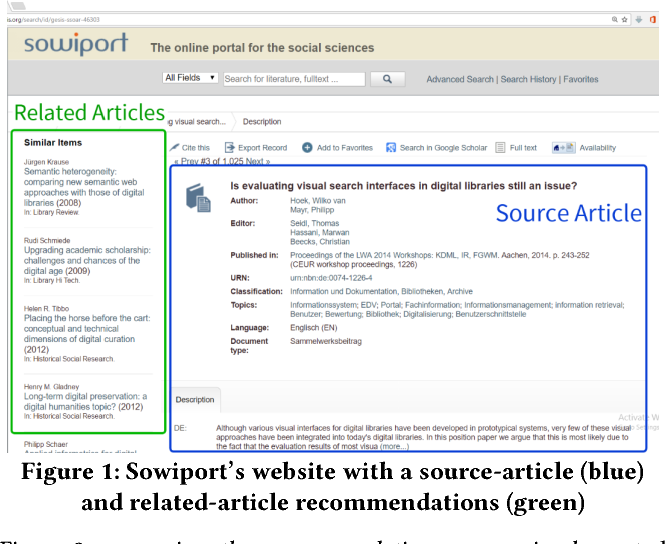 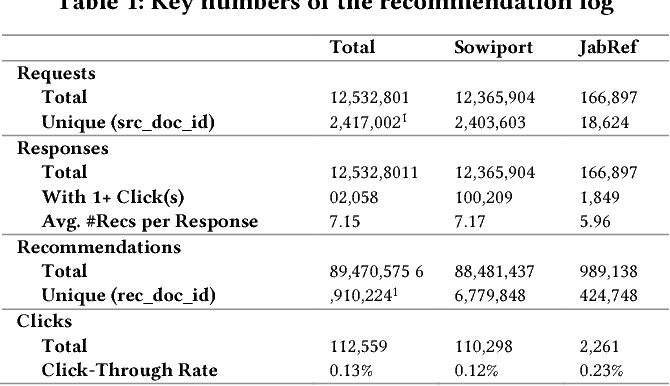 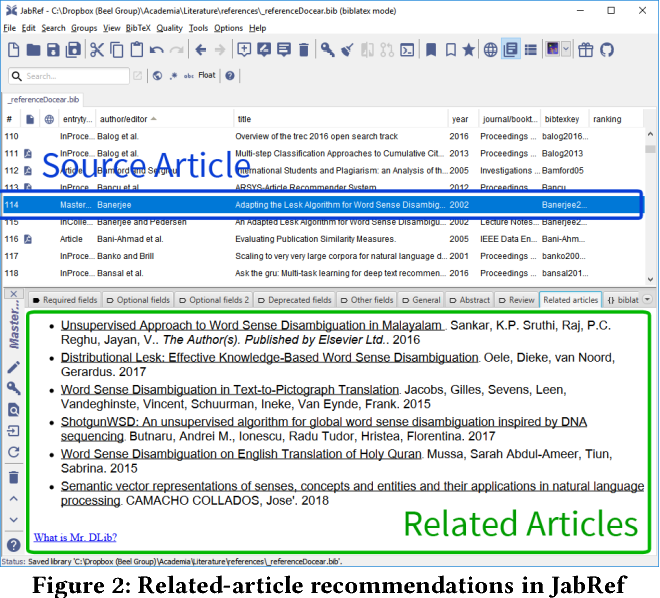 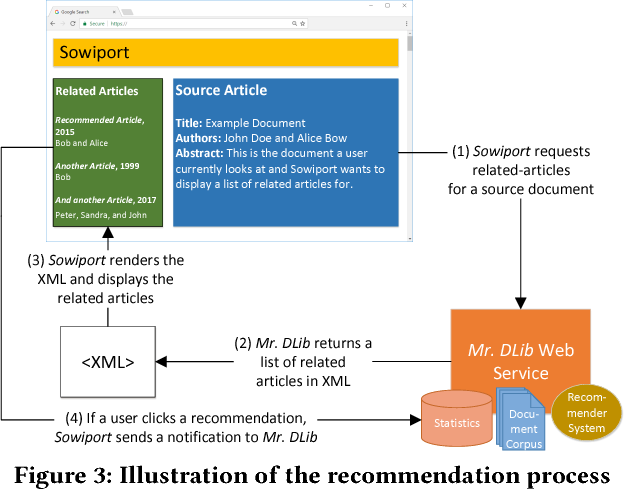 The main contribution of this paper is to introduce and describe a new recommender-systems dataset (RARD II). It is based on data from a recommender-system in the digital library and reference management software domain. As such, it complements datasets from other domains such as books, movies, and music. The RARD II dataset encompasses 89m recommendations, covering an item-space of 24m unique items. RARD II provides a range of rich recommendation data, beyond conventional ratings. For example, in addition to the usual ratings matrices, RARD II includes the original recommendation logs, which provide a unique insight into many aspects of the algorithms that generated the recommendations. In this paper, we summarise the key features of this dataset release, describing how it was generated and discussing some of its unique features.