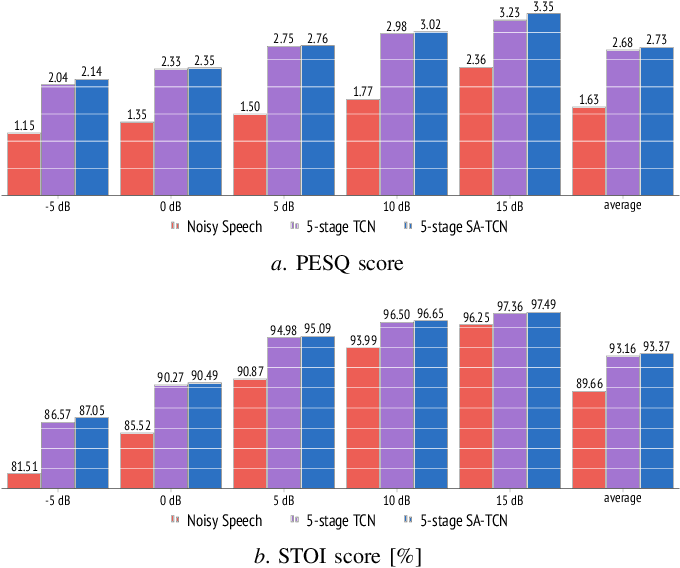 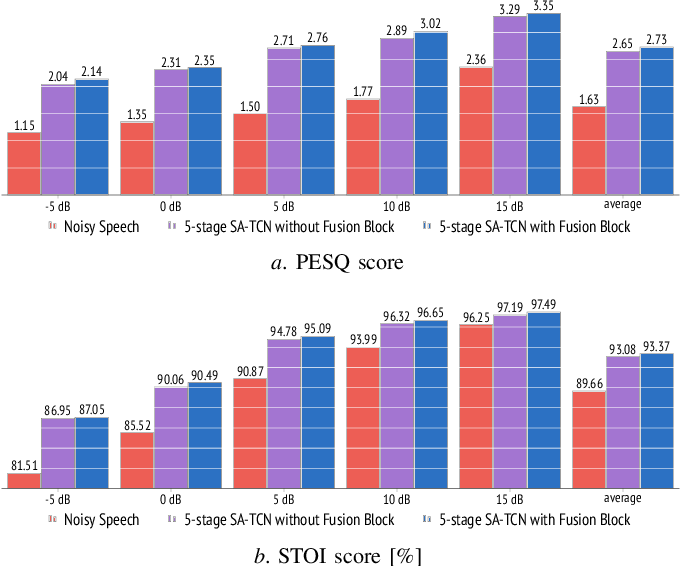 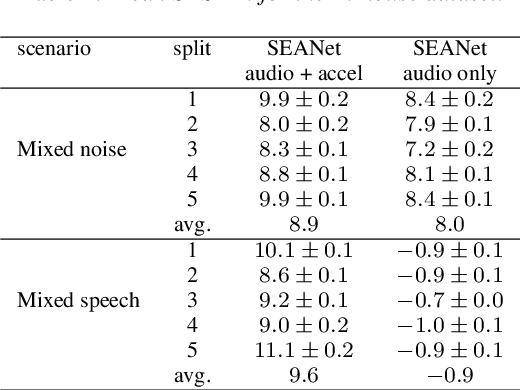 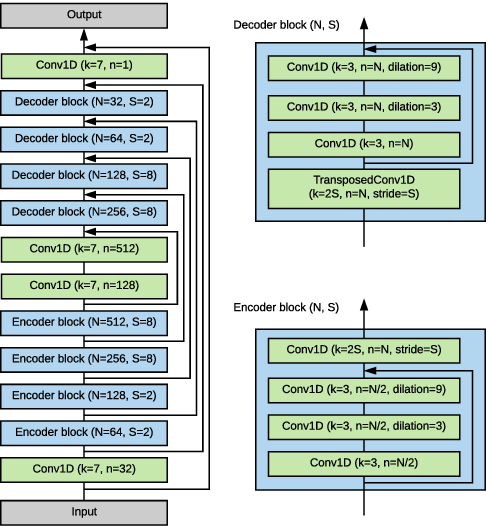 We explore the possibility of leveraging accelerometer data to perform speech enhancement in very noisy conditions. Although it is possible to only partially reconstruct user's speech from the accelerometer, the latter provides a strong conditioning signal that is not influenced from noise sources in the environment. Based on this observation, we feed a multi-modal input to SEANet (Sound EnhAncement Network), a wave-to-wave fully convolutional model, which adopts a combination of feature losses and adversarial losses to reconstruct an enhanced version of user's speech. We trained our model with data collected by sensors mounted on an earbud and synthetically corrupted by adding different kinds of noise sources to the audio signal. Our experimental results demonstrate that it is possible to achieve very high quality results, even in the case of interfering speech at the same level of loudness. A sample of the output produced by our model is available at https://google-research.github.io/seanet/multimodal/speech.

We present the Perceptimatic English Benchmark, an open experimental benchmark for evaluating quantitative models of speech perception in English. The benchmark consists of ABX stimuli along with the responses of 91 American English-speaking listeners. The stimuli test discrimination of a large number of English and French phonemic contrasts. They are extracted directly from corpora of read speech, making them appropriate for evaluating statistical acoustic models (such as those used in automatic speech recognition) trained on typical speech data sets. We show that phone discrimination is correlated with several types of models, and give recommendations for researchers seeking easily calculated norms of acoustic distance on experimental stimuli. We show that DeepSpeech, a standard English speech recognizer, is more specialized on English phoneme discrimination than English listeners, and is poorly correlated with their behaviour, even though it yields a low error on the decision task given to humans. 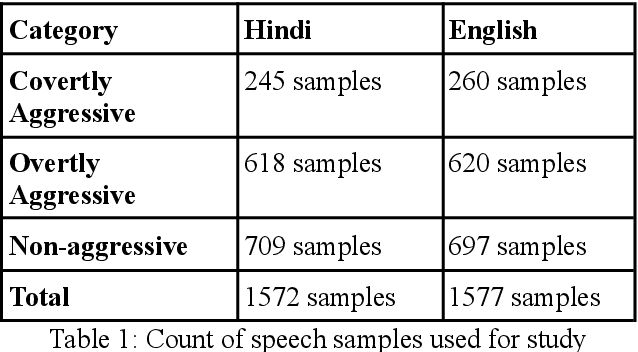 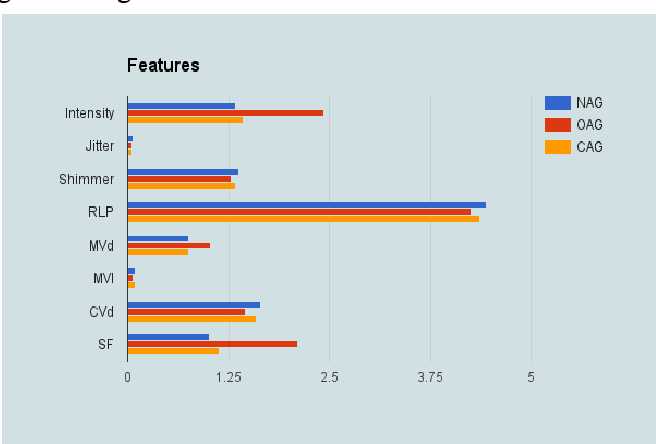 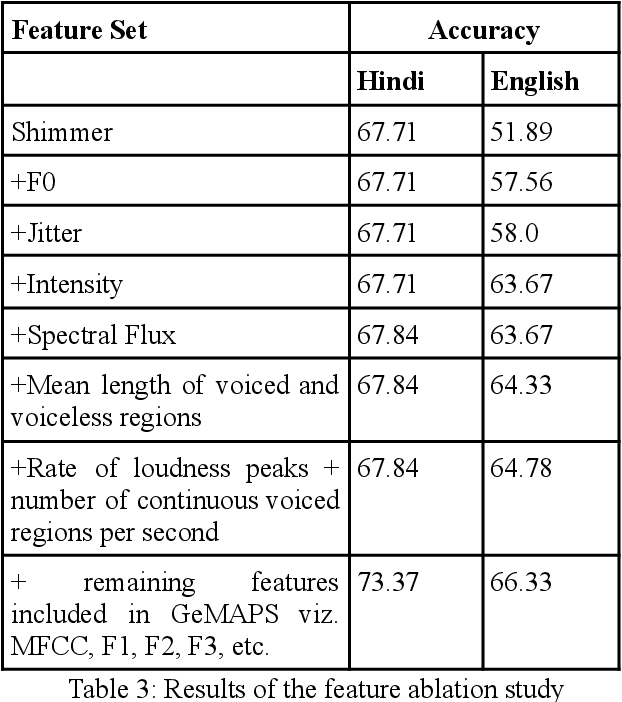 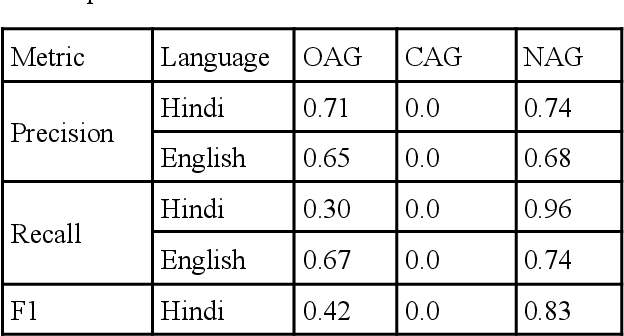 In the present paper, we will present the results of an acoustic analysis of political discourse in Hindi and discuss some of the conventionalised acoustic features of aggressive speech regularly employed by the speakers of Hindi and English. The study is based on a corpus of slightly over 10 hours of political discourse and includes debates on news channel and political speeches. Using this study, we develop two automatic classification systems for identifying aggression in English and Hindi speech, based solely on an acoustic model. The Hindi classifier, trained using 50 hours of annotated speech, and English classifier, trained using 40 hours of annotated speech, achieve a respectable accuracy of over 73% and 66% respectively. In this paper, we discuss the development of this annotated dataset, the experiments for developing the classifier and discuss the errors that it makes.


* To appear in the Proceedings of Conference on Sanskrit and Indian Languages: Technology 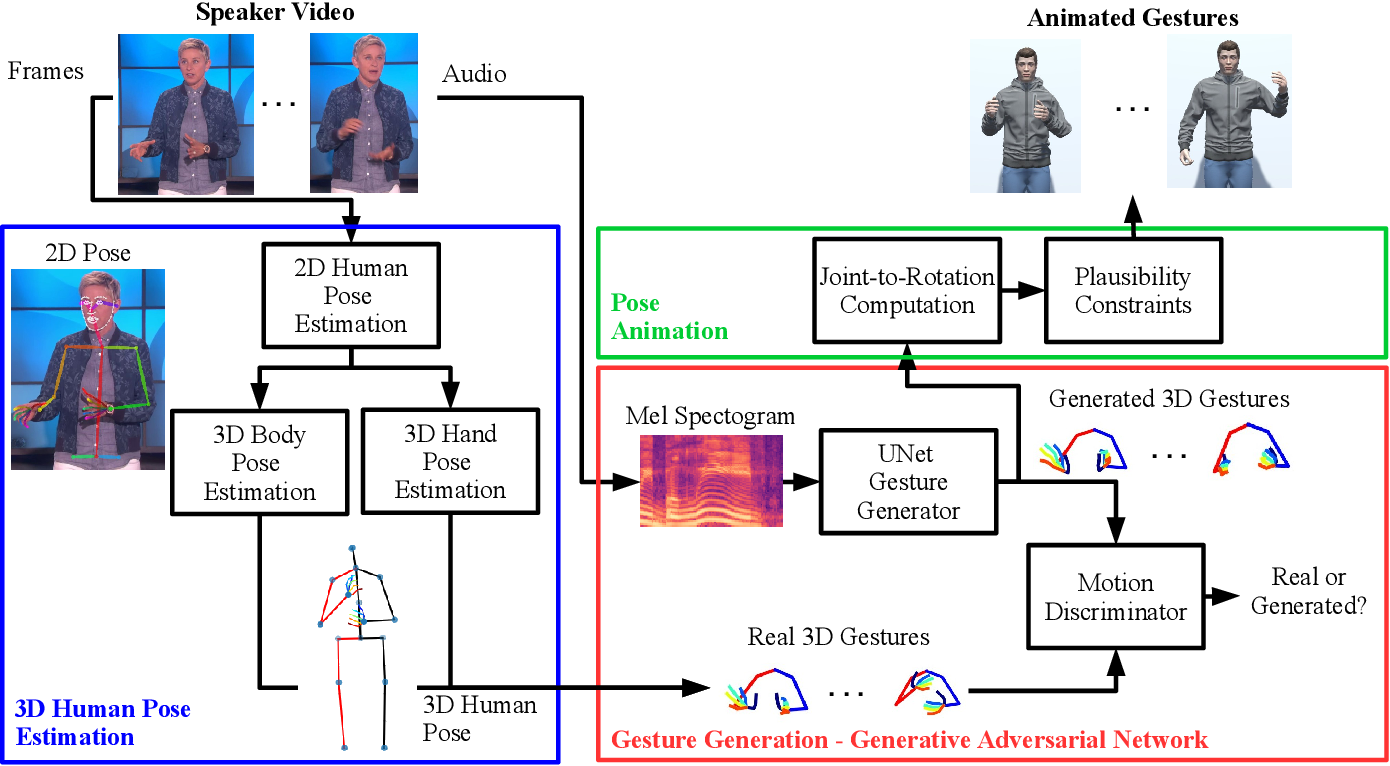 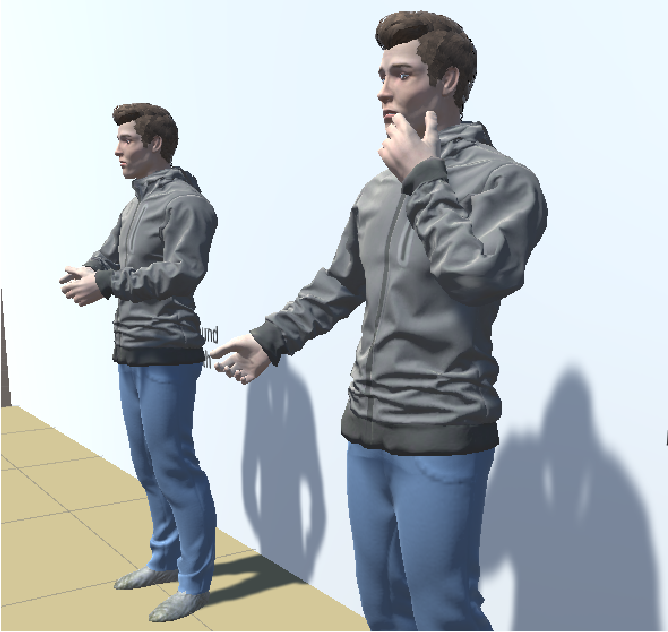 In real life, people communicate using both speech and non-verbal signals such as gestures, face expression or body pose. Non-verbal signals impact the meaning of the spoken utterance in an abundance of ways. An absence of non-verbal signals impoverishes the process of communication. Yet, when users are represented as avatars, it is difficult to translate non-verbal signals along with the speech into the virtual world without specialized motion-capture hardware. In this paper, we propose a novel, data-driven technique for generating gestures directly from speech. Our approach is based on the application of Generative Adversarial Neural Networks (GANs) to model the correlation rather than causation between speech and gestures. This approach approximates neuroscience findings on how non-verbal communication and speech are correlated. We create a large dataset which consists of speech and corresponding gestures in a 3D human pose format from which our model learns the speaker-specific correlation. We evaluate the proposed technique in a user study that is inspired by the Turing test. For the study, we animate the generated gestures on a virtual character. We find that users are not able to distinguish between the generated and the recorded gestures. Moreover, users are able to identify our synthesized gestures as related or not related to a given utterance.

Representing `how you say' with `what you say': English corpus of focused speech and text reflecting corresponding implications 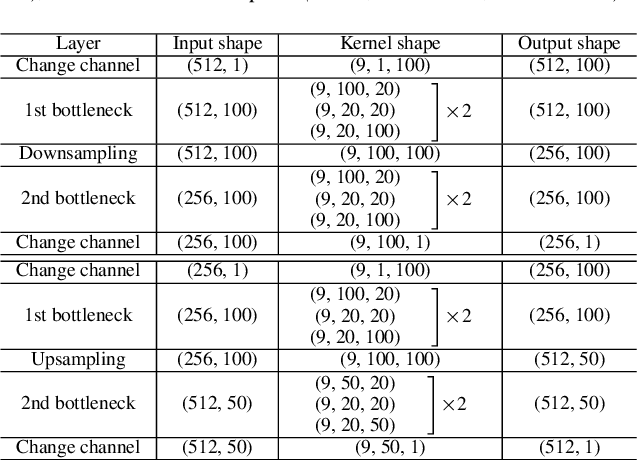 Speech codecs learn compact representations of speech signals to facilitate data transmission. Many recent deep neural network (DNN) based end-to-end speech codecs achieve low bitrates and high perceptual quality at the cost of model complexity. We propose a cross-module residual learning (CMRL) pipeline as a module carrier with each module reconstructing the residual from its preceding modules. CMRL differs from other DNN-based speech codecs, in that rather than modeling speech compression problem in a single large neural network, it optimizes a series of less-complicated modules in a two-phase training scheme. The proposed method shows better objective performance than AMR-WB and the state-of-the-art DNN-based speech codec with a similar network architecture. As an end-to-end model, it takes raw PCM signals as an input, but is also compatible with linear predictive coding (LPC), showing better subjective quality at high bitrates than AMR-WB and OPUS. The gain is achieved by using only 0.9 million trainable parameters, a significantly less complex architecture than the other DNN-based codecs in the literature.


* Accepted for publication in INTERSPEECH 2019 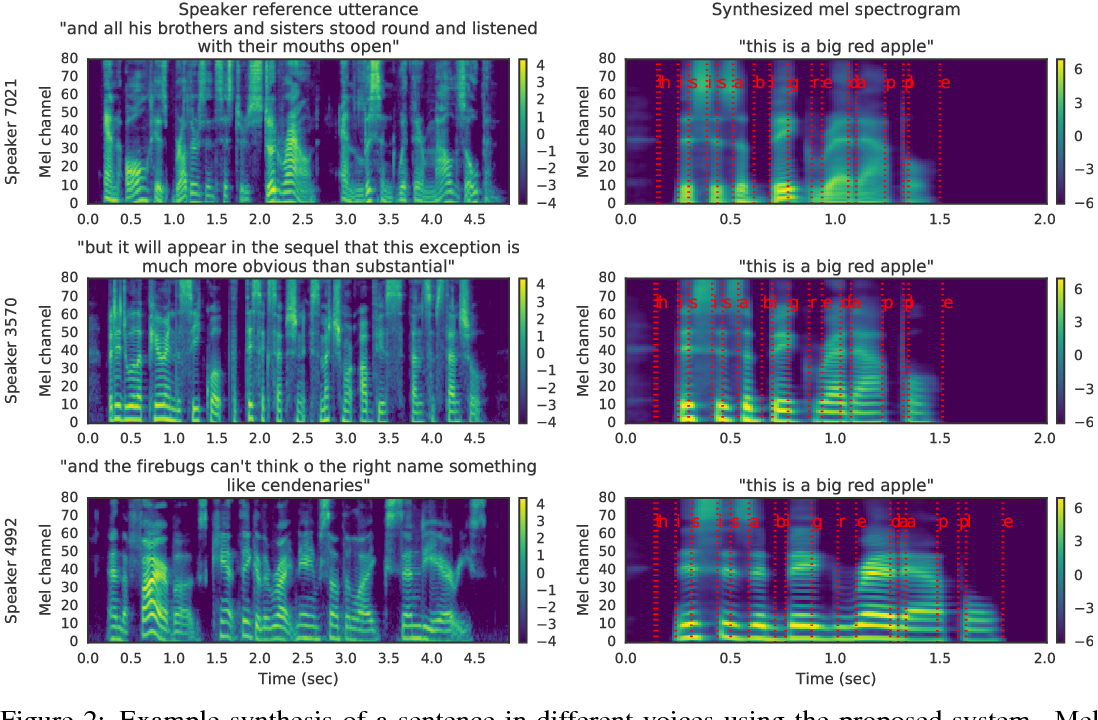 We describe a neural network-based system for text-to-speech (TTS) synthesis that is able to generate speech audio in the voice of many different speakers, including those unseen during training. Our system consists of three independently trained components: (1) a speaker encoder network, trained on a speaker verification task using an independent dataset of noisy speech from thousands of speakers without transcripts, to generate a fixed-dimensional embedding vector from seconds of reference speech from a target speaker; (2) a sequence-to-sequence synthesis network based on Tacotron 2, which generates a mel spectrogram from text, conditioned on the speaker embedding; (3) an auto-regressive WaveNet-based vocoder that converts the mel spectrogram into a sequence of time domain waveform samples. We demonstrate that the proposed model is able to transfer the knowledge of speaker variability learned by the discriminatively-trained speaker encoder to the new task, and is able to synthesize natural speech from speakers that were not seen during training. We quantify the importance of training the speaker encoder on a large and diverse speaker set in order to obtain the best generalization performance. Finally, we show that randomly sampled speaker embeddings can be used to synthesize speech in the voice of novel speakers dissimilar from those used in training, indicating that the model has learned a high quality speaker representation. 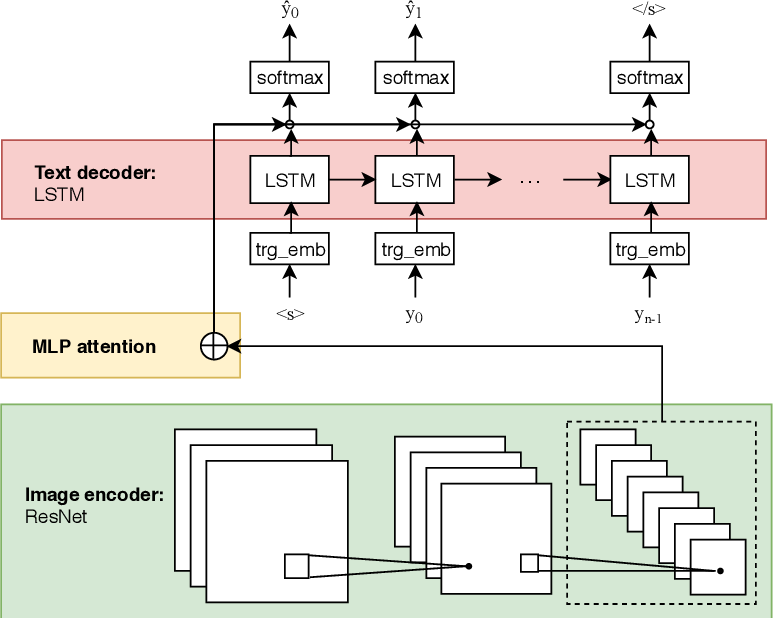 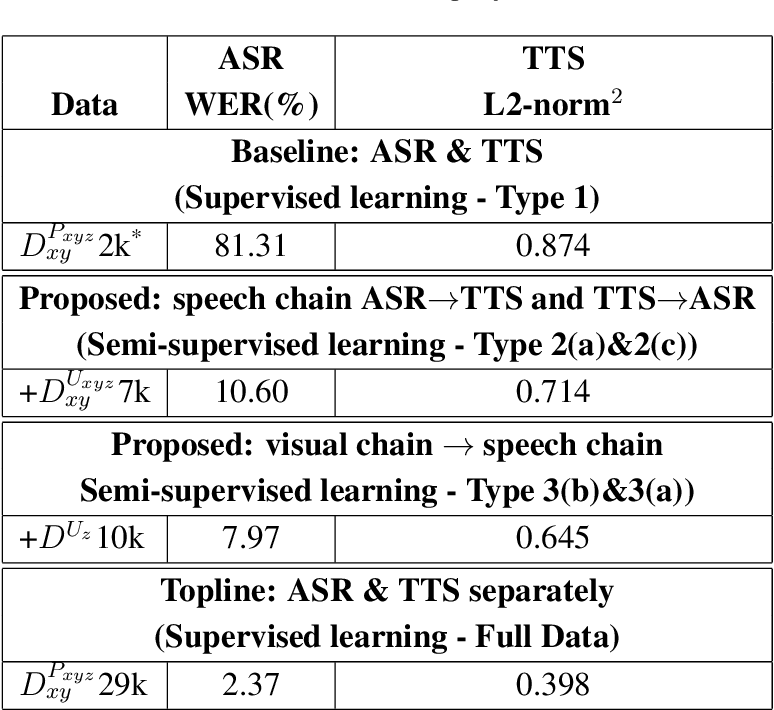 The most common way for humans to communicate is by speech. But perhaps a language system cannot know what it is communicating without a connection to the real world by image perception. In fact, humans perceive these multiple sources of information together to build a general concept. However, constructing a machine that can alleviate these modalities together in a supervised learning fashion is difficult, because a parallel dataset is required among speech, image, and text modalities altogether that is often unavailable. A machine speech chain based on sequence-to-sequence deep learning was previously proposed to achieve semi-supervised learning that enabled automatic speech recognition (ASR) and text-to-speech synthesis (TTS) to teach each other when they receive unpaired data. In this research, we take a further step by expanding the speech chain into a multimodal chain and design a closely knit chain architecture that connects ASR, TTS, image captioning (IC), and image retrieval (IR) models into a single framework. ASR, TTS, IC, and IR components can be trained in a semi-supervised fashion by assisting each other given incomplete datasets and leveraging cross-modal data augmentation within the chain.