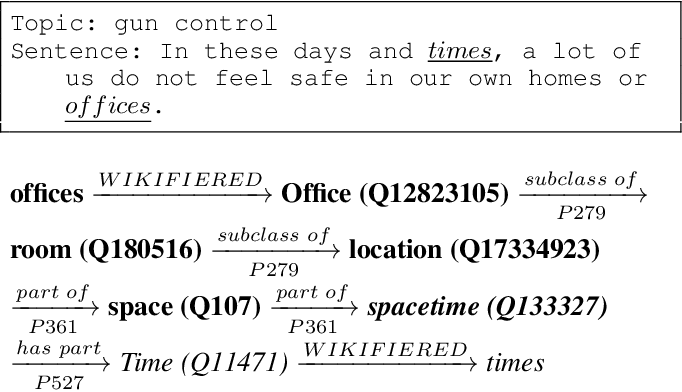 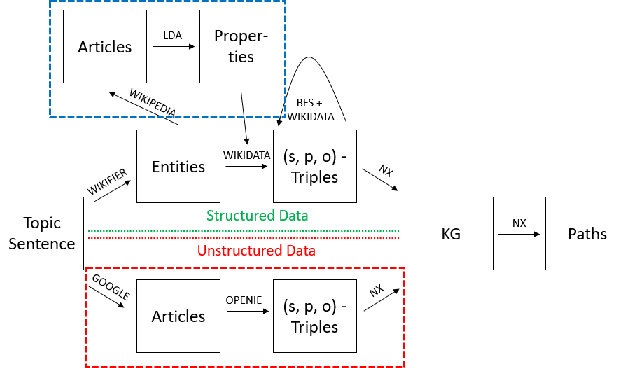 Decision-making usually takes five steps: identifying the problem, collecting data, extracting evidence, identifying pro and con arguments, and making decisions. Focusing on extracting evidence, this paper presents a hybrid model that combines latent Dirichlet allocation and word embeddings to obtain external knowledge from structured and unstructured data. We study the task of sentence-level argument mining, as arguments mostly require some degree of world knowledge to be identified and understood. Given a topic and a sentence, the goal is to classify whether a sentence represents an argument in regard to the topic. We use a topic model to extract topic- and sentence-specific evidence from the structured knowledge base Wikidata, building a graph based on the cosine similarity between the entity word vectors of Wikidata and the vector of the given sentence. Also, we build a second graph based on topic-specific articles found via Google to tackle the general incompleteness of structured knowledge bases. Combining these graphs, we obtain a graph-based model which, as our evaluation shows, successfully capitalizes on both structured and unstructured data. 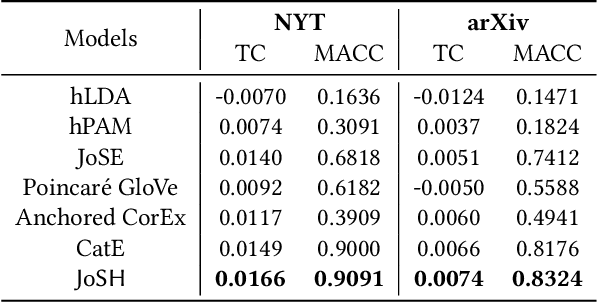 Mining a set of meaningful topics organized into a hierarchy is intuitively appealing since topic correlations are ubiquitous in massive text corpora. To account for potential hierarchical topic structures, hierarchical topic models generalize flat topic models by incorporating latent topic hierarchies into their generative modeling process. However, due to their purely unsupervised nature, the learned topic hierarchy often deviates from users' particular needs or interests. To guide the hierarchical topic discovery process with minimal user supervision, we propose a new task, Hierarchical Topic Mining, which takes a category tree described by category names only, and aims to mine a set of representative terms for each category from a text corpus to help a user comprehend his/her interested topics. We develop a novel joint tree and text embedding method along with a principled optimization procedure that allows simultaneous modeling of the category tree structure and the corpus generative process in the spherical space for effective category-representative term discovery. Our comprehensive experiments show that our model, named JoSH, mines a high-quality set of hierarchical topics with high efficiency and benefits weakly-supervised hierarchical text classification tasks. 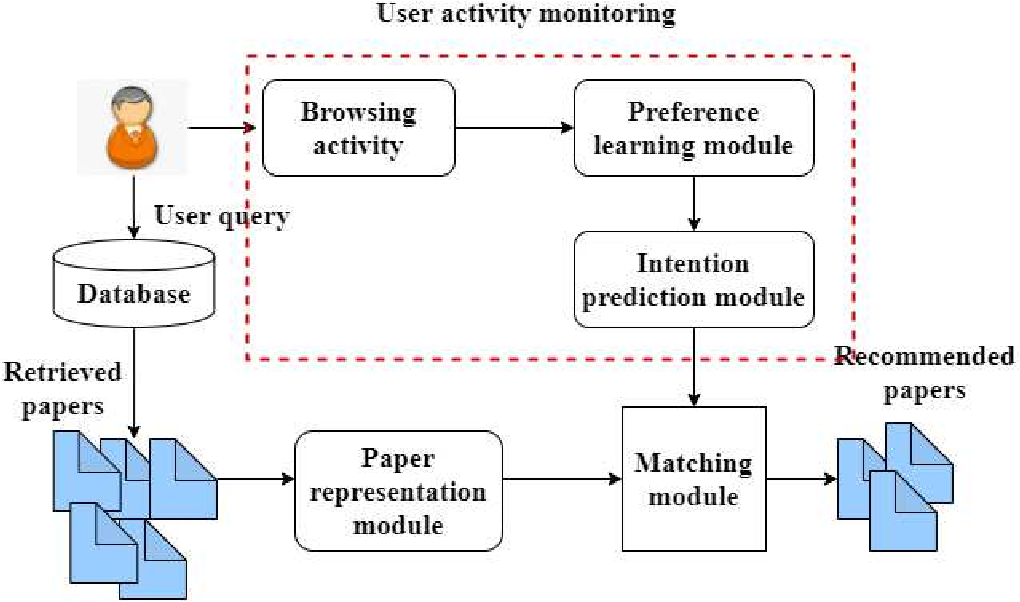 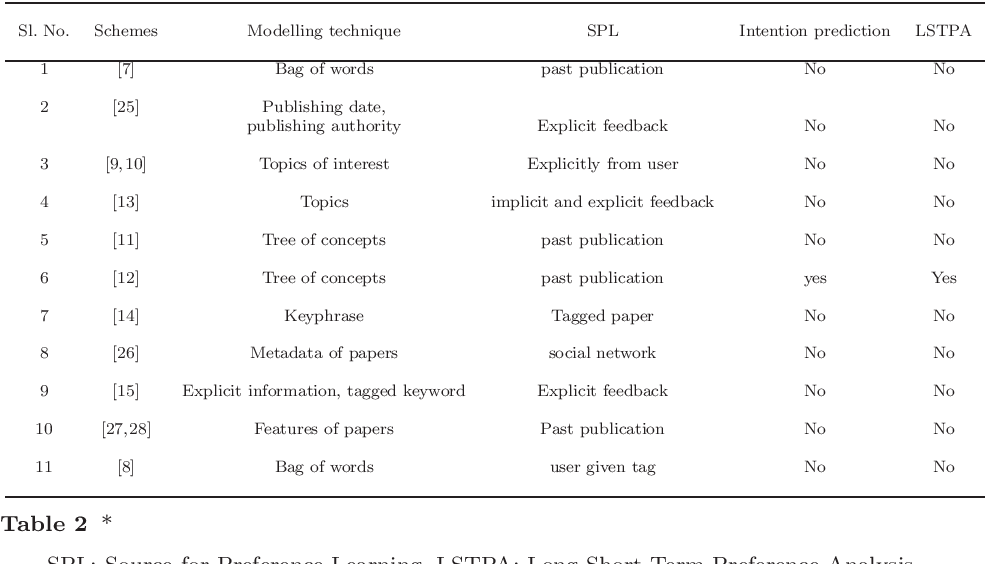 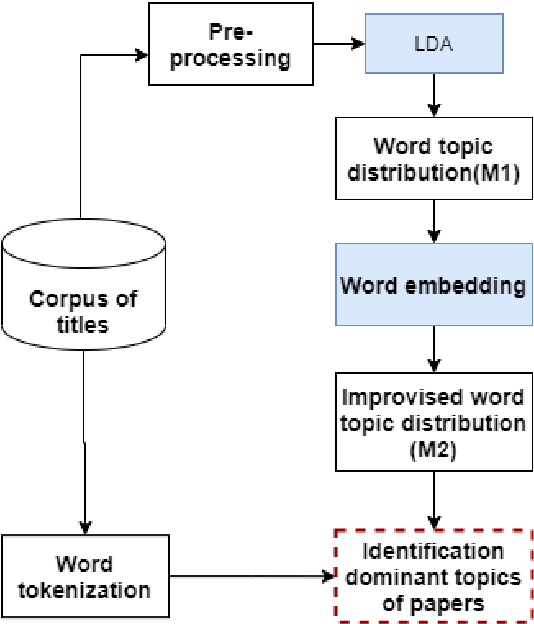 User intention which often changes dynamically is considered to be an important factor for modeling users in the design of recommendation systems. Recent studies are starting to focus on predicting user intention (what users want) beyond user preference (what users like). In this work, a user intention model is proposed based on deep sequential topic analysis. The model predicts a user's intention in terms of the topic of interest. The Hybrid Topic Model (HTM) comprising Latent Dirichlet Allocation (LDA) and Word2Vec is proposed to derive the topic of interest of users and the history of preferences. HTM finds the true topics of papers estimating word-topic distribution which includes syntactic and semantic correlations among words. Next, to model user intention, a Long Short Term Memory (LSTM) based sequential deep learning model is proposed. This model takes into account temporal context, namely the time difference between clicks of two consecutive papers seen by a user. Extensive experiments with the real-world research paper dataset indicate that the proposed approach significantly outperforms the state-of-the-art methods. Further, the proposed approach introduces a new road map to model a user activity suitable for the design of a research paper recommendation system.

Learning Supervised Topic Models for Classification and Regression from Crowds 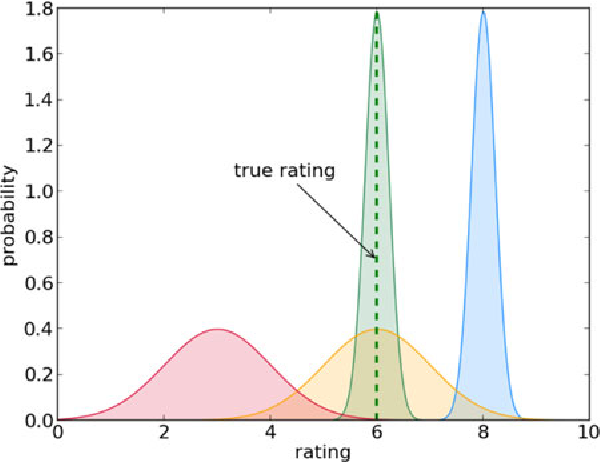 The growing need to analyze large collections of documents has led to great developments in topic modeling. Since documents are frequently associated with other related variables, such as labels or ratings, much interest has been placed on supervised topic models. However, the nature of most annotation tasks, prone to ambiguity and noise, often with high volumes of documents, deem learning under a single-annotator assumption unrealistic or unpractical for most real-world applications. In this article, we propose two supervised topic models, one for classification and another for regression problems, which account for the heterogeneity and biases among different annotators that are encountered in practice when learning from crowds. We develop an efficient stochastic variational inference algorithm that is able to scale to very large datasets, and we empirically demonstrate the advantages of the proposed model over state-of-the-art approaches. 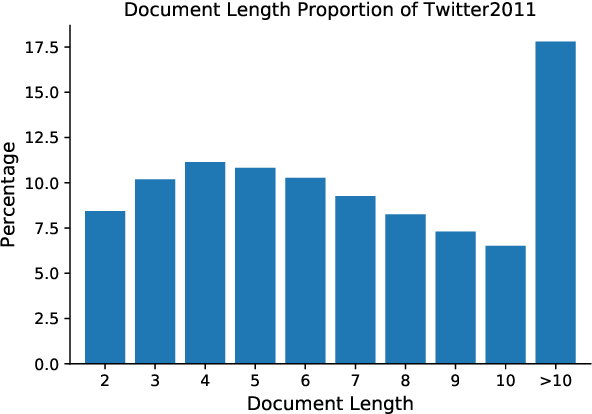 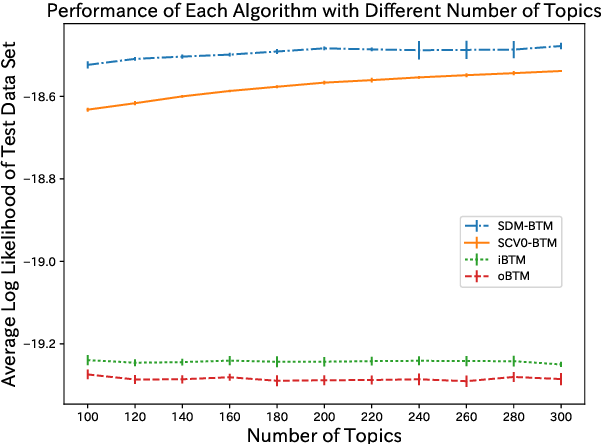 As the emergence and the thriving development of social networks, a huge number of short texts are accumulated and need to be processed. Inferring latent topics of collected short texts is useful for understanding its hidden structure and predicting new contents. Unlike conventional topic models such as latent Dirichlet allocation (LDA), a biterm topic model (BTM) was recently proposed for short texts to overcome the sparseness of document-level word co-occurrences by directly modeling the generation process of word pairs. Stochastic inference algorithms based on collapsed Gibbs sampling (CGS) and collapsed variational inference have been proposed for BTM. However, they either require large computational complexity, or rely on very crude estimation. In this work, we develop a stochastic divergence minimization inference algorithm for BTM to estimate latent topics more accurately in a scalable way. Experiments demonstrate the superiority of our proposed algorithm compared with existing inference algorithms. 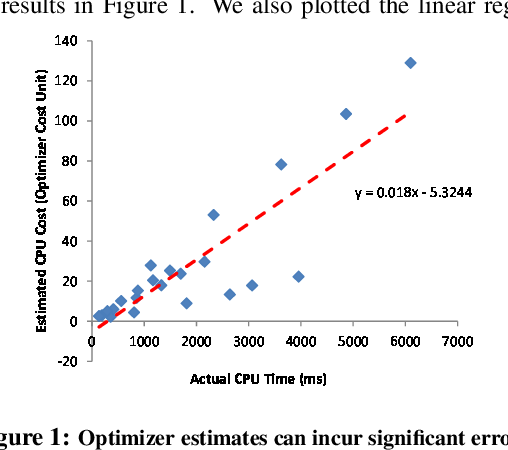 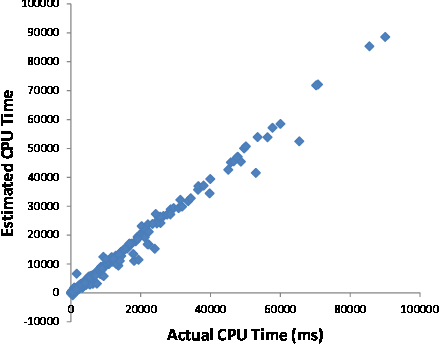 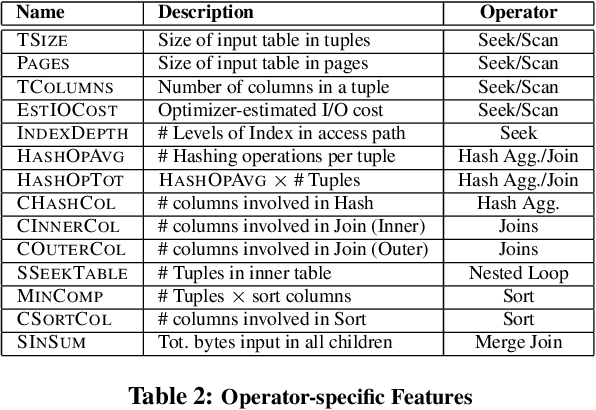 We present the multidimensional membership mixture (M3) models where every dimension of the membership represents an independent mixture model and each data point is generated from the selected mixture components jointly. This is helpful when the data has a certain shared structure. For example, three unique means and three unique variances can effectively form a Gaussian mixture model with nine components, while requiring only six parameters to fully describe it. In this paper, we present three instantiations of M3 models (together with the learning and inference algorithms): infinite, finite, and hybrid, depending on whether the number of mixtures is fixed or not. They are built upon Dirichlet process mixture models, latent Dirichlet allocation, and a combination respectively. We then consider two applications: topic modeling and learning 3D object arrangements. Our experiments show that our M3 models achieve better performance using fewer topics than many classic topic models. We also observe that topics from the different dimensions of M3 models are meaningful and orthogonal to each other. 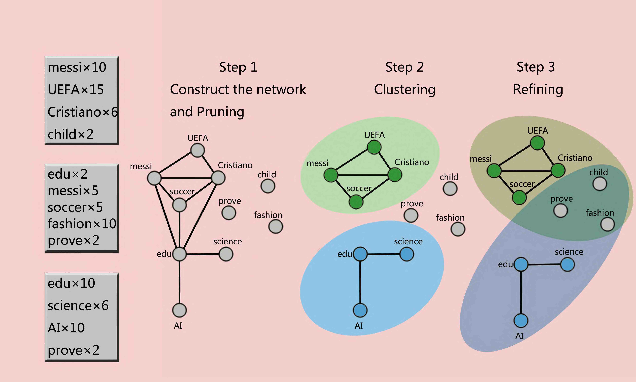 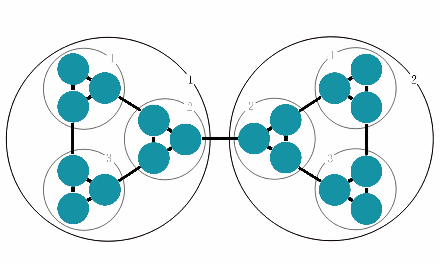 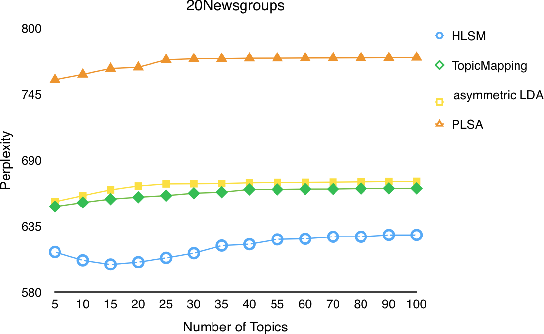 Much of information sits in an unprecedented amount of text data. Managing allocation of these large scale text data is an important problem for many areas. Topic modeling performs well in this problem. The traditional generative models (PLSA,LDA) are the state-of-the-art approaches in topic modeling and most recent research on topic generation has been focusing on improving or extending these models. However, results of traditional generative models are sensitive to the number of topics K, which must be specified manually. The problem of generating topics from corpus resembles community detection in networks. Many effective algorithms can automatically detect communities from networks without a manually specified number of the communities. Inspired by these algorithms, in this paper, we propose a novel method named Hierarchical Latent Semantic Mapping (HLSM), which automatically generates topics from corpus. HLSM calculates the association between each pair of words in the latent topic space, then constructs a unipartite network of words with this association and hierarchically generates topics from this network. We apply HLSM to several document collections and the experimental comparisons against several state-of-the-art approaches demonstrate the promising performance. 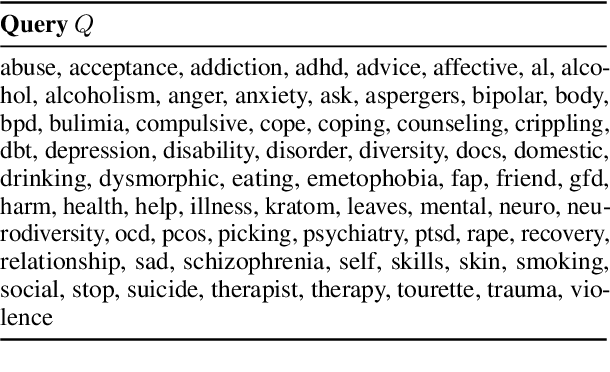 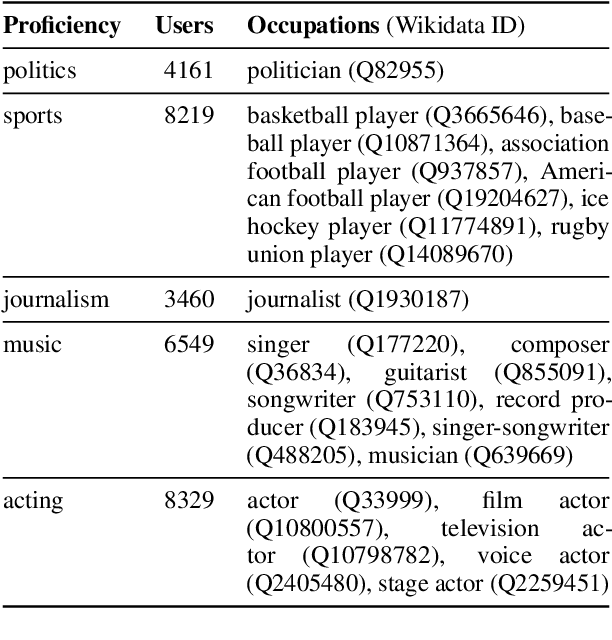 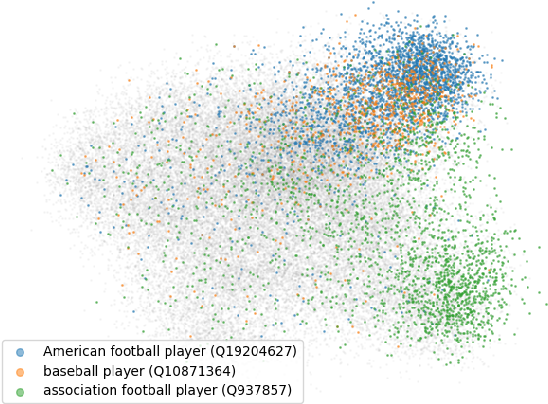 We introduce the problem of proficiency modeling: Given a user's posts on a social media platform, the task is to identify the subset of posts or topics for which the user has some level of proficiency. This enables the filtering and ranking of social media posts on a given topic as per user proficiency. Unlike experts on a given topic, proficient users may not have received formal training and possess years of practical experience, but may be autodidacts, hobbyists, and people with sustained interest, enabling them to make genuine and original contributions to discourse. While predicting whether a user is an expert on a given topic imposes strong constraints on who is a true positive, proficiency modeling implies a graded scoring, relaxing these constraints. Put another way, many active social media users can be assumed to possess, or eventually acquire, some level of proficiency on topics relevant to their community. We tackle proficiency modeling in an unsupervised manner by utilizing user embeddings to model engagement with a given topic, as indicated by a user's preference for authoring related content. We investigate five alternative approaches to model proficiency, ranging from basic ones to an advanced, tailored user modeling approach, applied within two real-world benchmarks for evaluation. 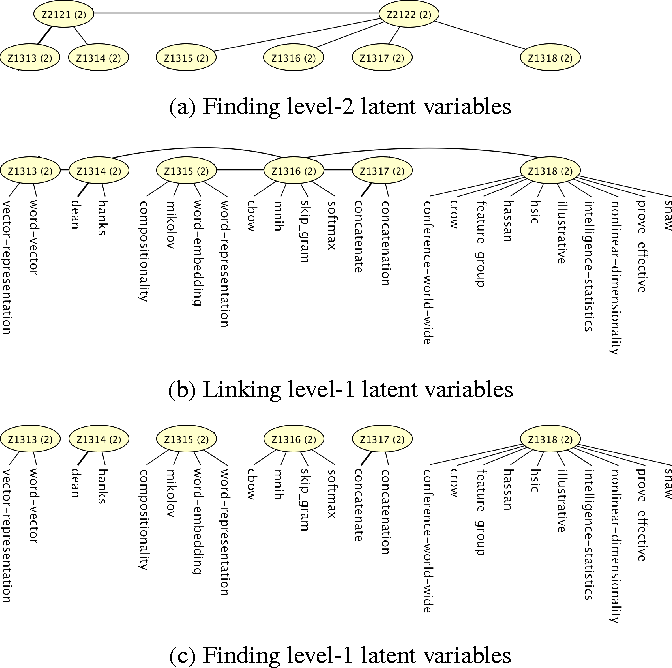 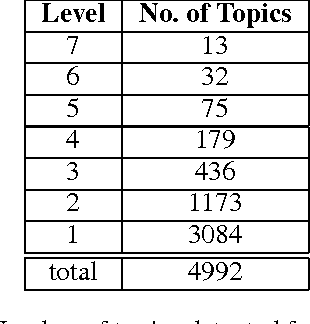 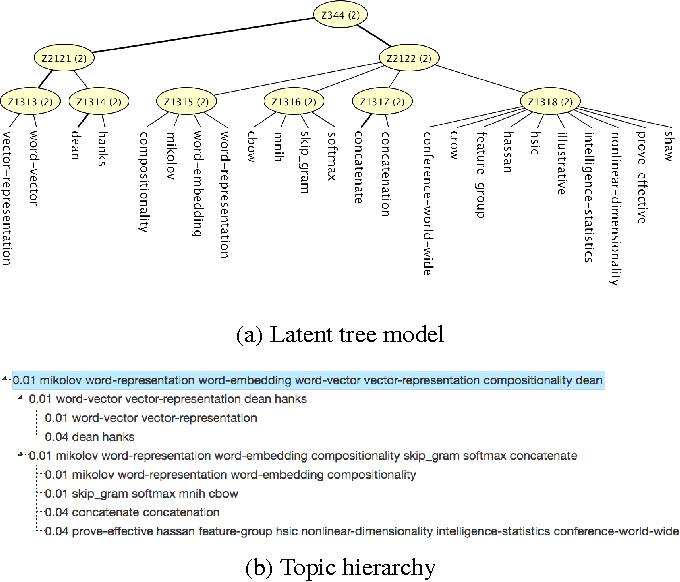 Academic researchers often need to face with a large collection of research papers in the literature. This problem may be even worse for postgraduate students who are new to a field and may not know where to start. To address this problem, we have developed an online catalog of research papers where the papers have been automatically categorized by a topic model. The catalog contains 7719 papers from the proceedings of two artificial intelligence conferences from 2000 to 2015. Rather than the commonly used Latent Dirichlet Allocation, we use a recently proposed method called hierarchical latent tree analysis for topic modeling. The resulting topic model contains a hierarchy of topics so that users can browse the topics from the top level to the bottom level. The topic model contains a manageable number of general topics at the top level and allows thousands of fine-grained topics at the bottom level. It also can detect topics that have emerged recently.

Topic models, and more specifically the class of Latent Dirichlet Allocation (LDA), are widely used for probabilistic modeling of text. MCMC sampling from the posterior distribution is typically performed using a collapsed Gibbs sampler. We propose a parallel sparse partially collapsed Gibbs sampler and compare its speed and efficiency to state-of-the-art samplers for topic models on five well-known text corpora of differing sizes and properties. In particular, we propose and compare two different strategies for sampling the parameter block with latent topic indicators. The experiments show that the increase in statistical inefficiency from only partial collapsing is smaller than commonly assumed, and can be more than compensated by the speedup from parallelization and sparsity on larger corpora. We also prove that the partially collapsed samplers scale well with the size of the corpus. The proposed algorithm is fast, efficient, exact, and can be used in more modeling situations than the ordinary collapsed sampler.


* Accepted for publication in Journal of Computational and Graphical Statistics