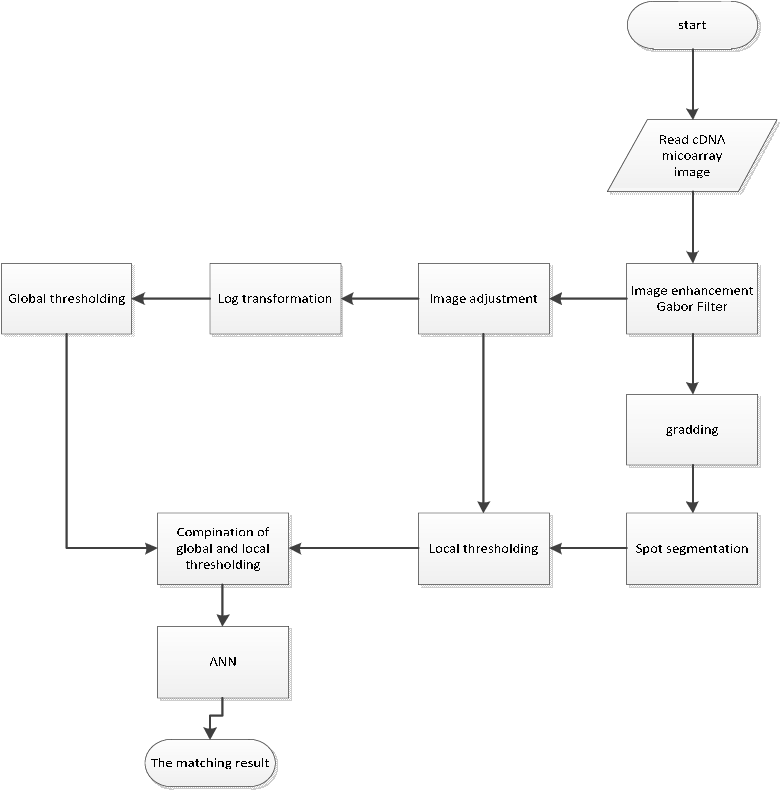 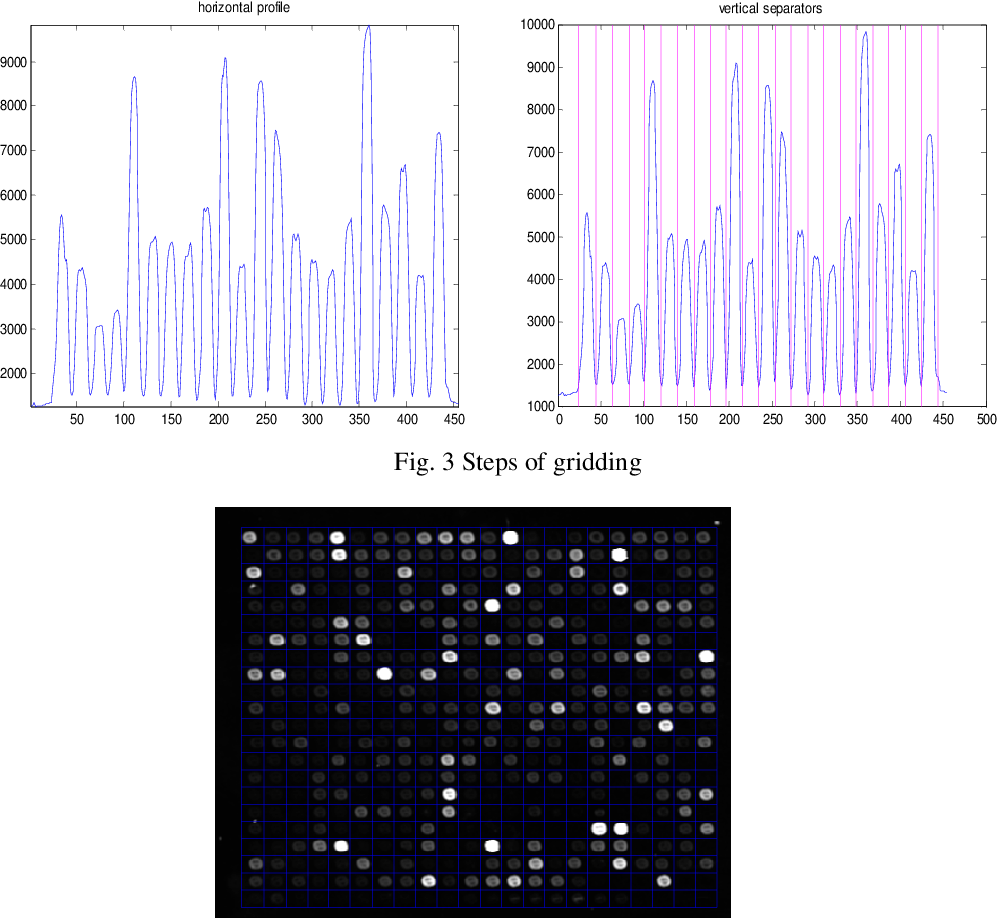 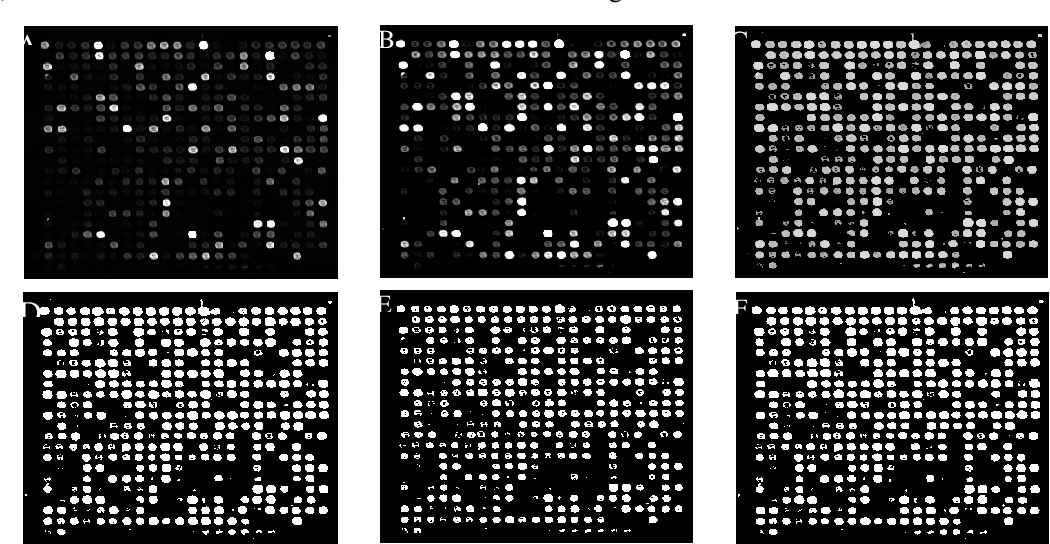 The complementary DNA (cDNA) sequence is considered to be the magic biometric technique for personal identification. In this paper, we present a new method for cDNA recognition based on the artificial neural network (ANN). Microarray imaging is used for the concurrent identification of thousands of genes. We have segmented the location of the spots in a cDNA microarray. Thus, a precise localization and segmenting of a spot are essential to obtain a more accurate intensity measurement, leading to a more precise expression measurement of a gene. The segmented cDNA microarray image is resized and it is used as an input for the proposed artificial neural network. For matching and recognition, we have trained the artificial neural network. Recognition results are given for the galleries of cDNA sequences . The numerical results show that, the proposed matching technique is an effective in the cDNA sequences process. We also compare our results with previous results and find out that, the proposed technique is an effective matching performance. 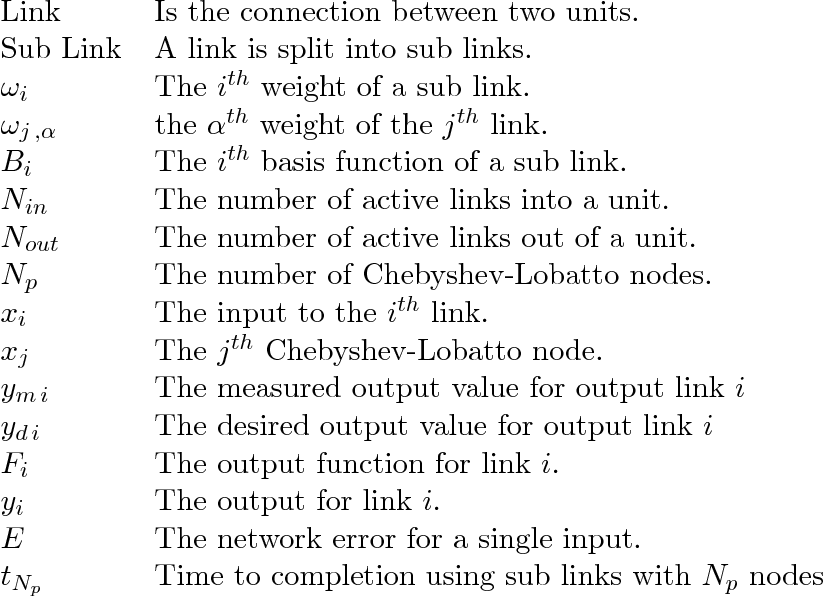 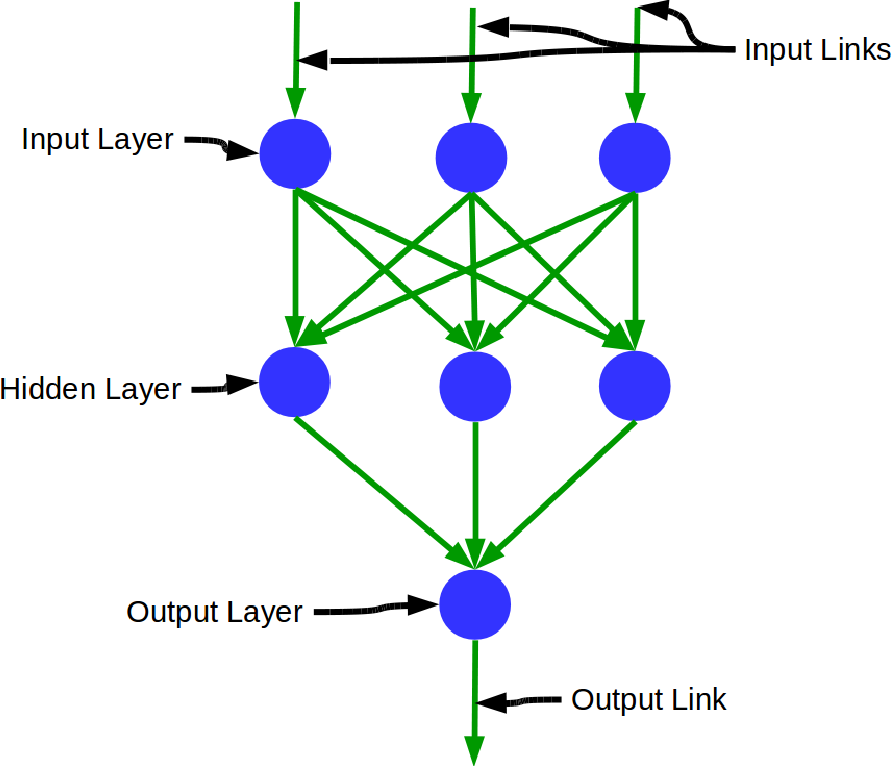 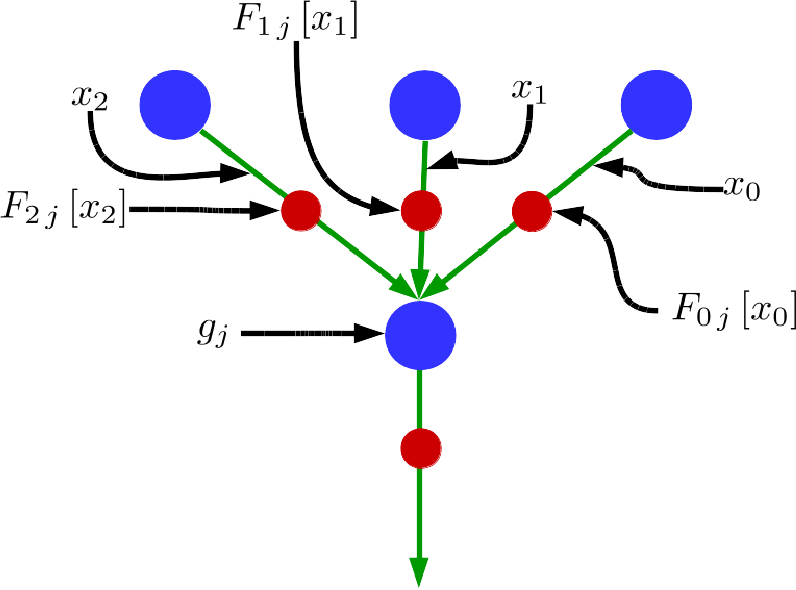 An artificial neural network is presented based on the idea of connections between units that are only active for a specific range of input values and zero outside that range (and so are not evaluated outside the active range). The connection function is represented by a polynomial with compact support. The finite range of activation allows for great activation sparsity in the network and means that theoretically you are able to add computational power to the network without increasing the computational time required to evaluate the network for a given input. The polynomial order ranges from first to fifth order. Unit dropout is used for regularization and a parameter free weight update is used. Better performance is obtained by moving from piecewise linear connections to piecewise quadratic, even better performance can be obtained by moving to higher order polynomials. The algorithm is tested on the MAGIC Gamma ray data set as well as the MNIST data set. 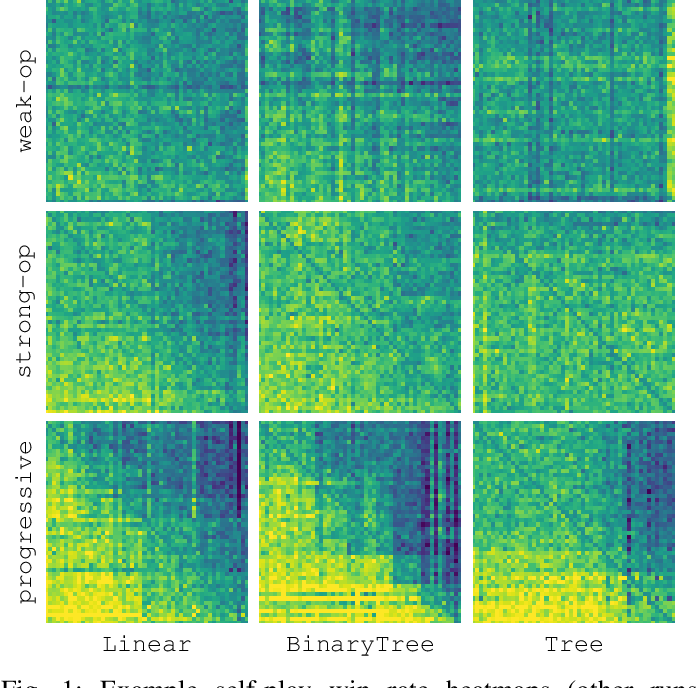 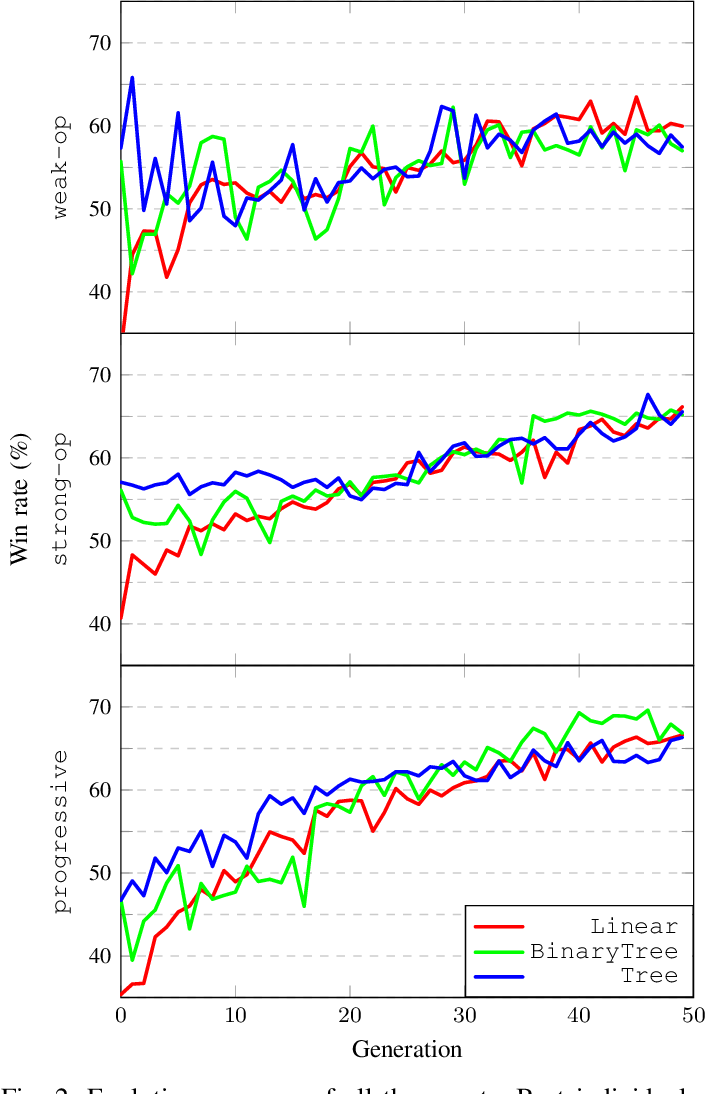 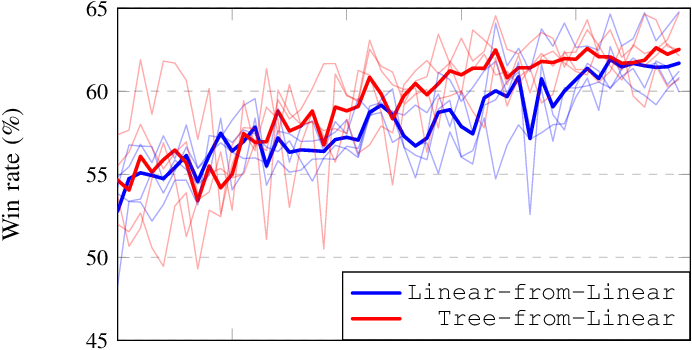 In this work, we presented a study regarding two important aspects of evolving feature-based game evaluation functions: the choice of genome representation and the choice of opponent used to test the model. We compared three representations. One simpler and more limited, based on a vector of weights that are used in a linear combination of predefined game features. And two more complex, based on binary and n-ary trees. On top of this test, we also investigated the influence of fitness defined as a simulation-based function that: plays against a fixed weak opponent, plays against a fixed strong opponent, and plays against the best individual from the previous population. For a testbed, we have chosen a recently popular domain of digital collectible card games. We encoded our experiments in a programming game, Legends of Code and Magic, used in Strategy Card Game AI Competition. However, as the problems stated are of general nature we are convinced that our observations are applicable in the other domains as well.

Rethinking and Improving the Robustness of Image Style Transfer 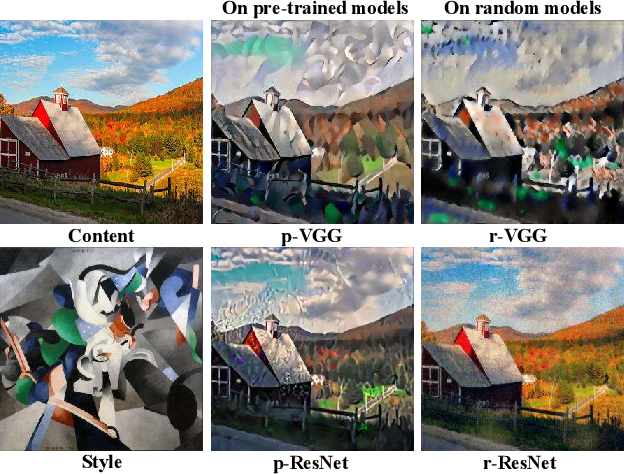 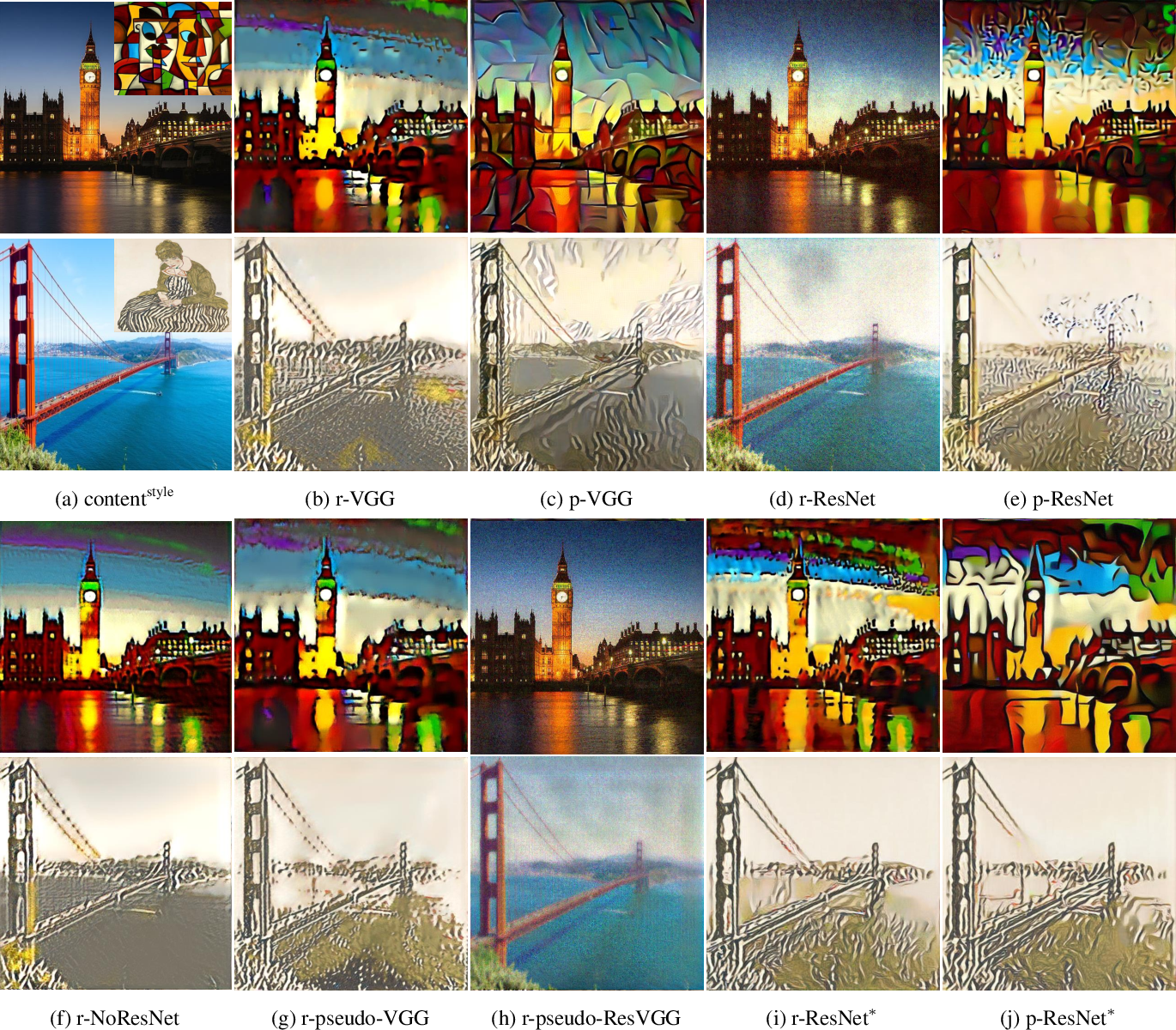 Extensive research in neural style transfer methods has shown that the correlation between features extracted by a pre-trained VGG network has a remarkable ability to capture the visual style of an image. Surprisingly, however, this stylization quality is not robust and often degrades significantly when applied to features from more advanced and lightweight networks, such as those in the ResNet family. By performing extensive experiments with different network architectures, we find that residual connections, which represent the main architectural difference between VGG and ResNet, produce feature maps of small entropy, which are not suitable for style transfer. To improve the robustness of the ResNet architecture, we then propose a simple yet effective solution based on a softmax transformation of the feature activations that enhances their entropy. Experimental results demonstrate that this small magic can greatly improve the quality of stylization results, even for networks with random weights. This suggests that the architecture used for feature extraction is more important than the use of learned weights for the task of style transfer. 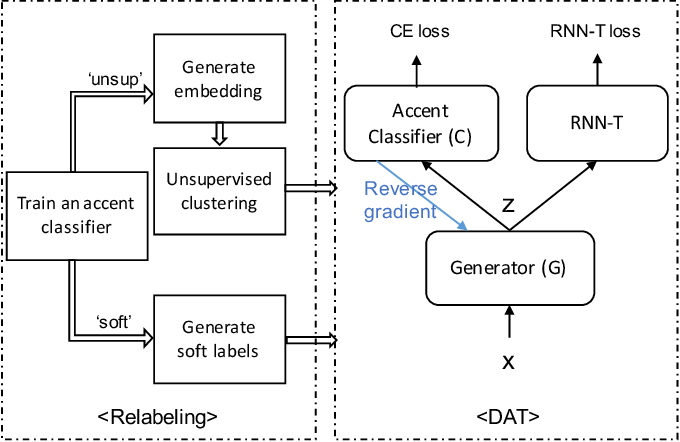 Accents mismatching is a critical problem for end-to-end ASR. This paper aims to address this problem by building an accent-robust RNN-T system with domain adversarial training (DAT). We unveil the magic behind DAT and provide, for the first time, a theoretical guarantee that DAT learns accent-invariant representations. We also prove that performing the gradient reversal in DAT is equivalent to minimizing the Jensen-Shannon divergence between domain output distributions. Motivated by the proof of equivalence, we introduce reDAT, a novel technique based on DAT, which relabels data using either unsupervised clustering or soft labels. Experiments on 23K hours of multi-accent data show that DAT achieves competitive results over accent-specific baselines on both native and non-native English accents but up to 13% relative WER reduction on unseen accents; our reDAT yields further improvements over DAT by 3% and 8% relatively on non-native accents of American and British English.

Understanding deep learning is increasingly emergent as it penetrates more and more into industry and science. In recent years, a research line from Fourier analysis sheds lights into this magical "black box" by showing a Frequency Principle (F-Principle or spectral bias) of the training behavior of deep neural networks (DNNs) -- DNNs often fit functions from low to high frequency during the training. The F-Principle is first demonstrated by one-dimensional synthetic data followed by the verification in high-dimensional real datasets. A series of works subsequently enhance the validity of the F-Principle. This low-frequency implicit bias reveals the strength of neural network in learning low-frequency functions as well as its deficiency in learning high-frequency functions. Such understanding inspires the design of DNN-based algorithms in practical problems, explains experimental phenomena emerging in various scenarios, and further advances the study of deep learning from the frequency perspective. Although incomplete, we provide an overview of F-Principle and propose some open problems for future research. 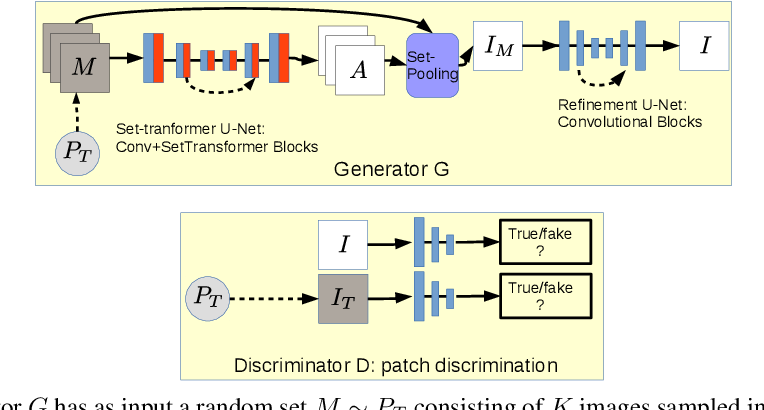 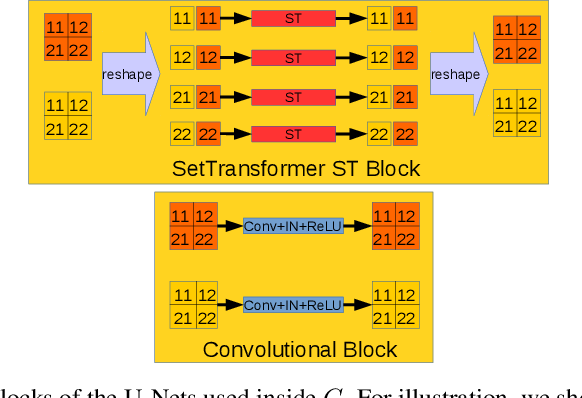 Cutting and pasting image segments feels intuitive: the choice of source templates gives artists flexibility in recombining existing source material. Formally, this process takes an image set as input and outputs a collage of the set elements. Such selection from sets of source templates does not fit easily in classical convolutional neural models requiring inputs of fixed size. Inspired by advances in attention and set-input machine learning, we present a novel architecture that can generate in one forward pass image collages of source templates using set-structured representations. This paper has the following contributions: (i) a novel framework for image generation called Memory Attentive Generation of Image Collages (MAGIC) which gives artists new ways to create digital collages; (ii) from the machine-learning perspective, we show a novel Generative Adversarial Networks (GAN) architecture that uses Set-Transformer layers and set-pooling to blend sets of random image samples - a hybrid non-parametric approach. 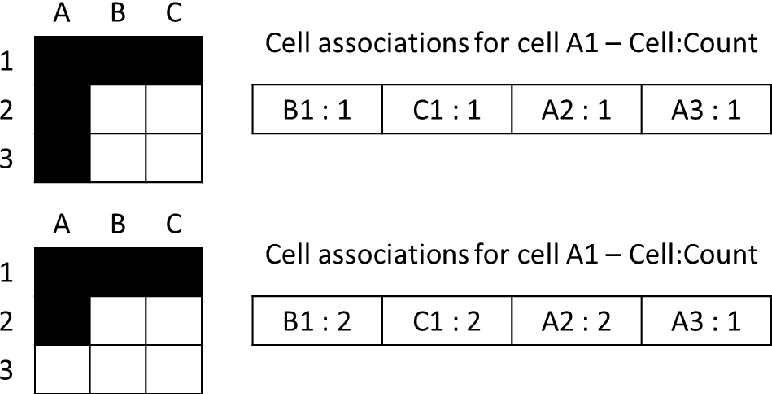 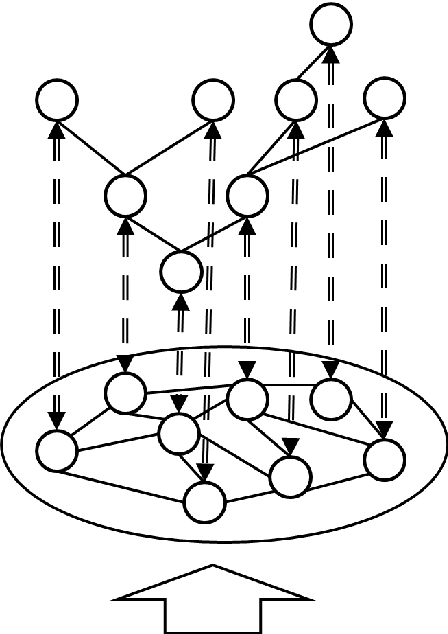 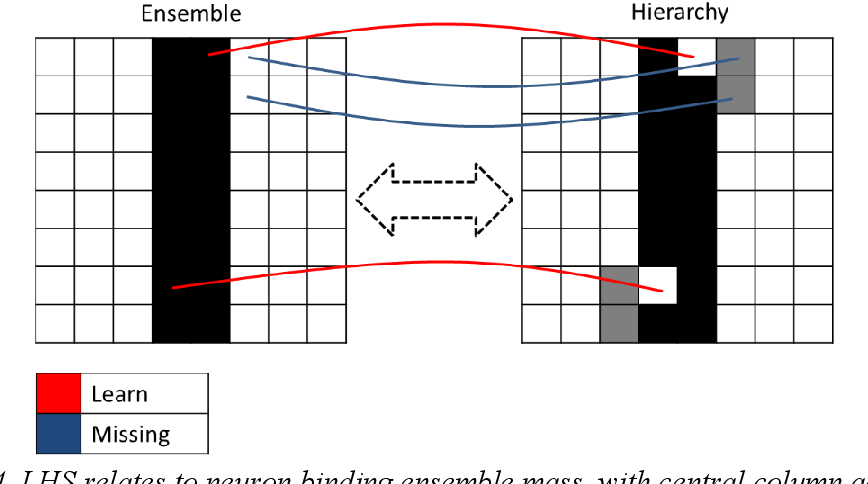 This paper describes some biologically-inspired processes that could be used to build the sort of networks that we associate with the human brain. New to this paper, a 'refined' neuron will be proposed. This is a group of neurons that by joining together can produce a more analogue system, but with the same level of control and reliability that a binary neuron would have. With this new structure, it will be possible to think of an essentially binary system in terms of a more variable set of values. The paper also shows how recent research associated with the new model, can be combined with established theories, to produce a more complete picture. The propositions are largely in line with conventional thinking, but possibly with one or two more radical suggestions. An earlier cognitive model can be filled in with more specific details, based on the new research results, where the components appear to fit together almost seamlessly. The intention of the research has been to describe plausible 'mechanical' processes that can produce the appropriate brain structures and mechanisms, but that could be used without the magical 'intelligence' part that is still not fully understood. There are also some important updates from an earlier version of this paper. 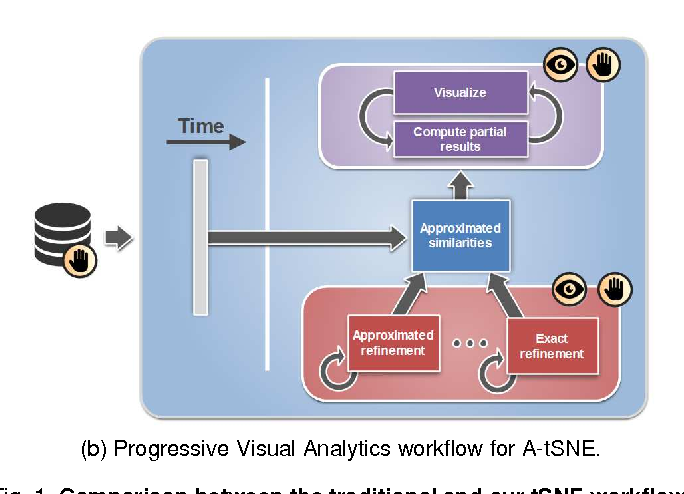 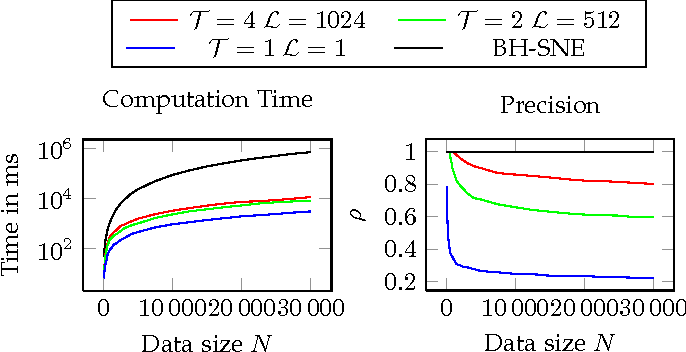 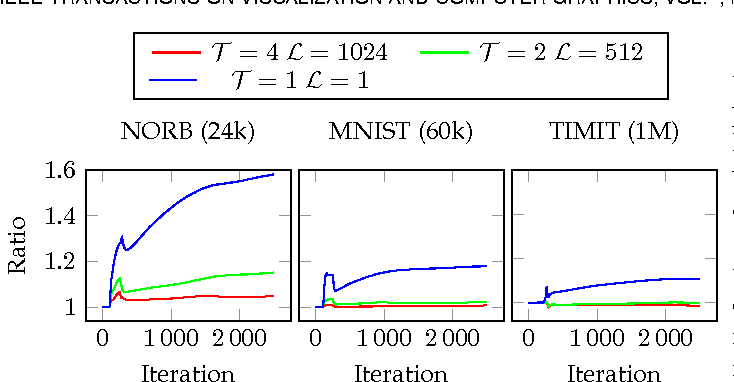 Progressive Visual Analytics aims at improving the interactivity in existing analytics techniques by means of visualization as well as interaction with intermediate results. One key method for data analysis is dimensionality reduction, for example, to produce 2D embeddings that can be visualized and analyzed efficiently. t-Distributed Stochastic Neighbor Embedding (tSNE) is a well-suited technique for the visualization of several high-dimensional data. tSNE can create meaningful intermediate results but suffers from a slow initialization that constrains its application in Progressive Visual Analytics. We introduce a controllable tSNE approximation (A-tSNE), which trades off speed and accuracy, to enable interactive data exploration. We offer real-time visualization techniques, including a density-based solution and a Magic Lens to inspect the degree of approximation. With this feedback, the user can decide on local refinements and steer the approximation level during the analysis. We demonstrate our technique with several datasets, in a real-world research scenario and for the real-time analysis of high-dimensional streams to illustrate its effectiveness for interactive data analysis. 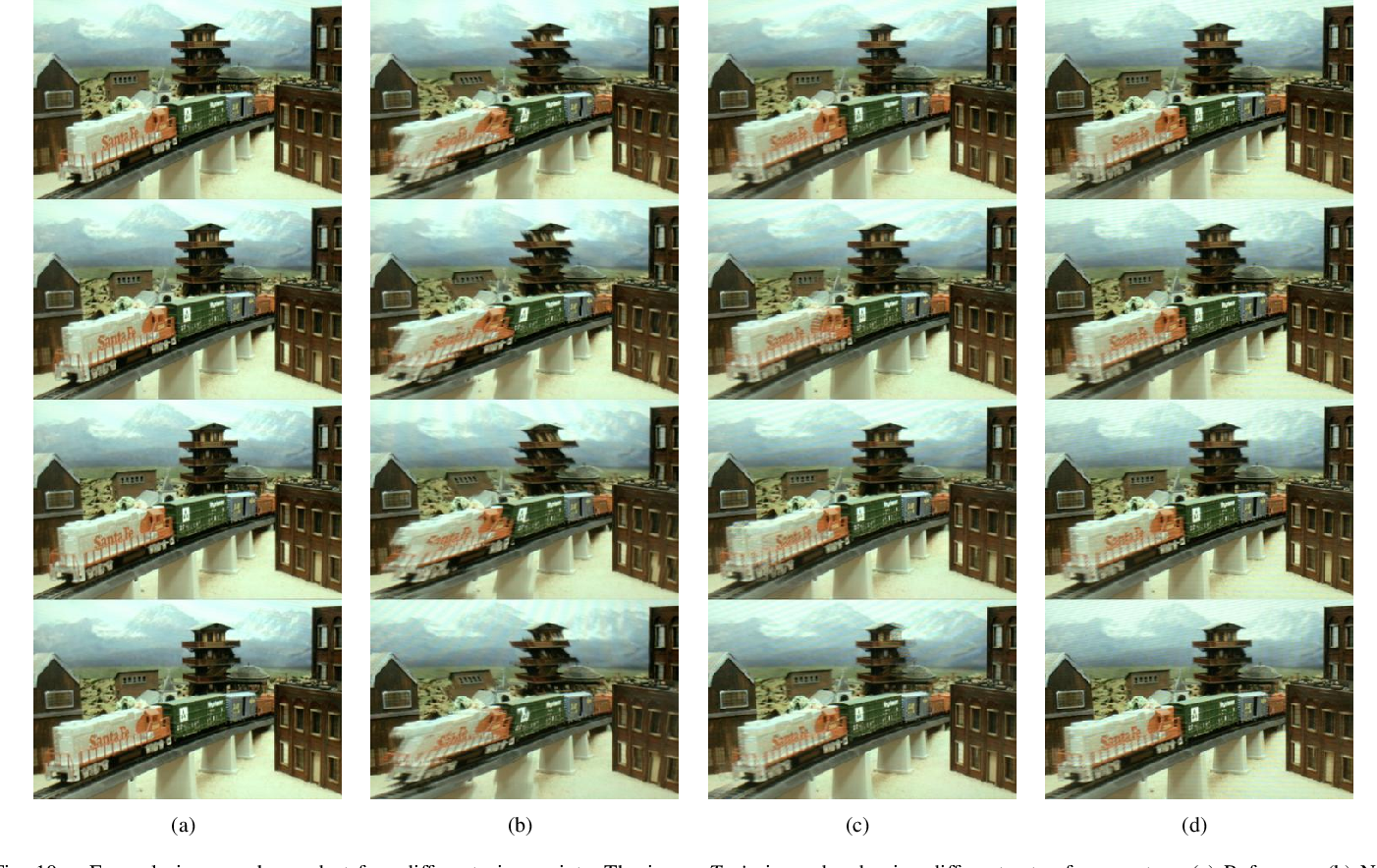 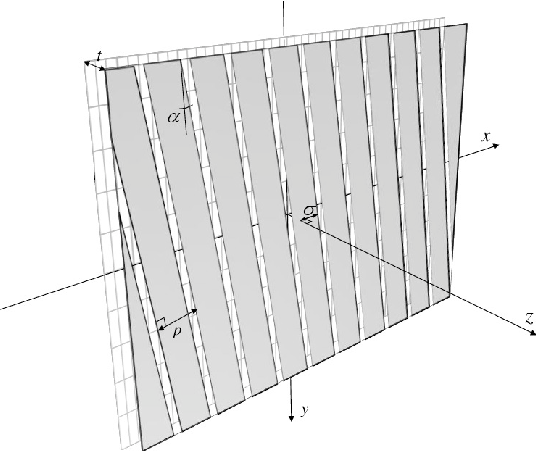 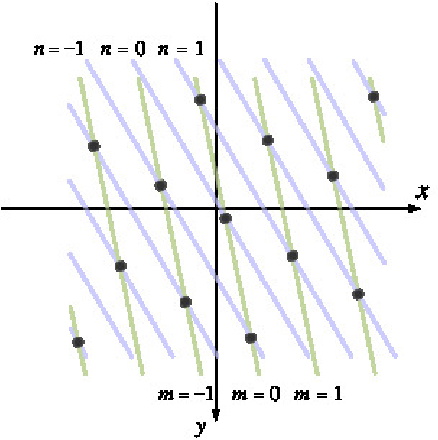 Nearly all 3D displays need calibration for correct rendering. More often than not, the optical elements in a 3D display are misaligned from the designed parameter setting. As a result, 3D magic does not perform well as intended. The observed images tend to get distorted. In this paper, we propose a novel display calibration method to fix the situation. In our method, a pattern image is displayed on the panel and a camera takes its pictures twice at different positions. Then, based on a quantitative model, we extract all display parameters (i.e., pitch, slanted angle, gap or thickness, offset) from the observed patterns in the captured images. For high accuracy and robustness, our method analyzes the patterns mostly in frequency domain. We conduct two types of experiments for validation; one with optical simulation for quantitative results and the other with real-life displays for qualitative assessment. Experimental results demonstrate that our method is quite accurate, about a half order of magnitude higher than prior work; is efficient, spending less than 2 s for computation; and is robust to noise, working well in the SNR regime as low as 6 dB.