Self-attention (SA), which encodes vector sequences according to their pairwise similarity, is widely used in speech recognition due to its strong context modeling ability. However, when applied to long sequence data, its accuracy is reduced. This is caused by the fact that its weighted average operator may lead to the dispersion of the attention distribution, which results in the relationship between adjacent signals ignored. To address this issue, in this paper, we introduce relative-position-awareness self-attention (RPSA). It not only maintains the global-range dependency modeling ability of self-attention, but also improves the localness modeling ability. Because the local window length of the original RPSA is fixed and sensitive to different test data, here we propose Gaussian-based self-attention (GSA) whose window length is learnable and adaptive to the test data automatically. We further generalize GSA to a new residual Gaussian self-attention (resGSA) for the performance improvement. We apply RPSA, GSA, and resGSA to Transformer-based speech recognition respectively. Experimental results on the AISHELL-1 Mandarin speech recognition corpus demonstrate the effectiveness of the proposed methods. For example, the resGSA-Transformer achieves a character error rate (CER) of 5.86% on the test set, which is relative 7.8% lower than that of the SA-Transformer. Although the performance of the proposed resGSA-Transformer is only slightly better than that of the RPSA-Transformer, it does not have to tune the window length manually. 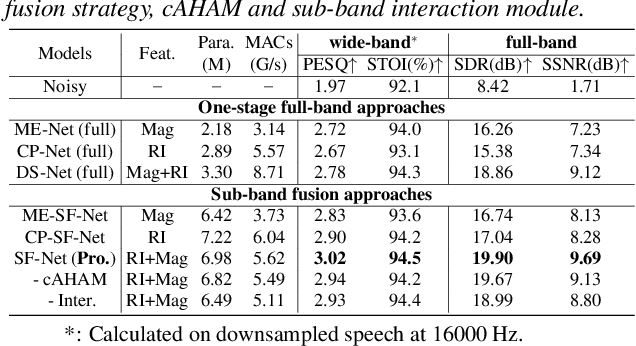 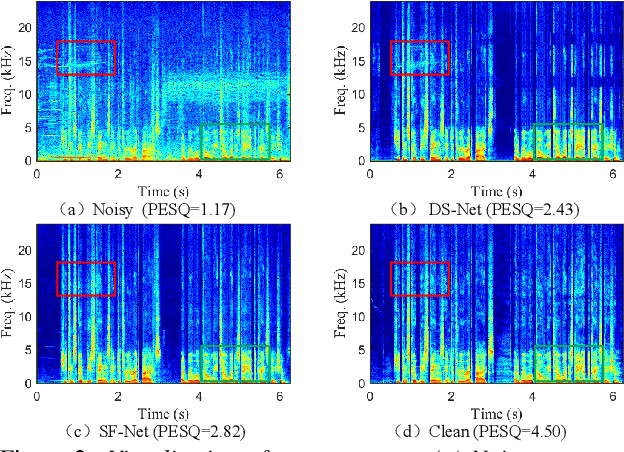 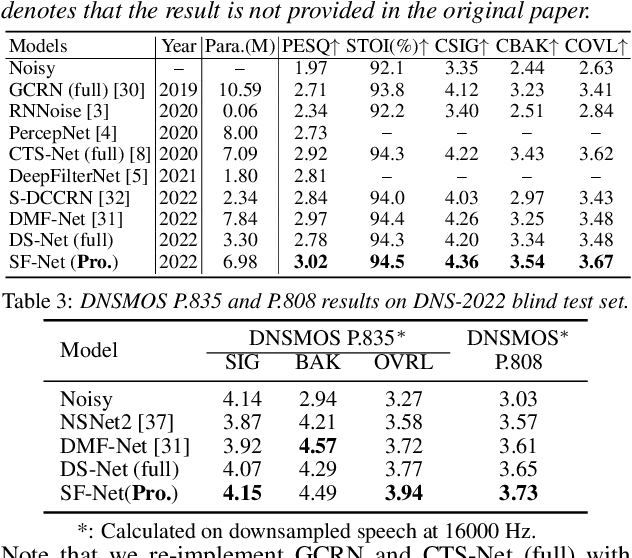 Due to the high computational complexity to model more frequency bands, it is still intractable to conduct real-time full-band speech enhancement based on deep neural networks. Recent studies typically utilize the compressed perceptually motivated features with relatively low frequency resolution to filter the full-band spectrum by one-stage networks, leading to limited speech quality improvements. In this paper, we propose a coordinated sub-band fusion network for full-band speech enhancement, which aims to recover the low- (0-8 kHz), middle- (8-16 kHz), and high-band (16-24 kHz) in a step-wise manner. Specifically, a dual-stream network is first pretrained to recover the low-band complex spectrum, and another two sub-networks are designed as the middle- and high-band noise suppressors in the magnitude-only domain. To fully capitalize on the information intercommunication, we employ a sub-band interaction module to provide external knowledge guidance across different frequency bands. Extensive experiments show that the proposed method yields consistent performance advantages over state-of-the-art full-band baselines. 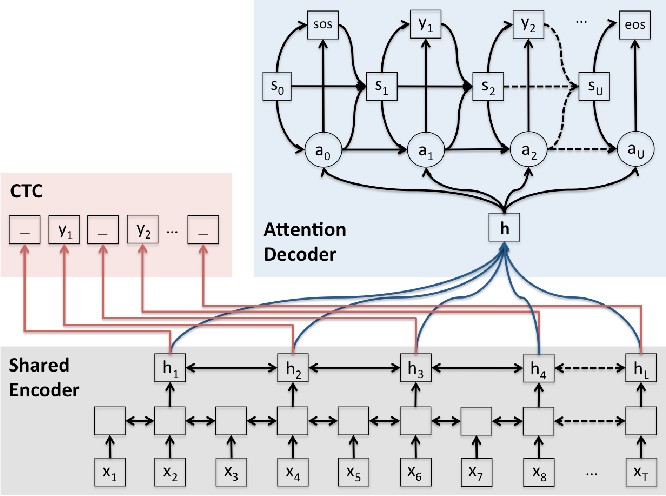 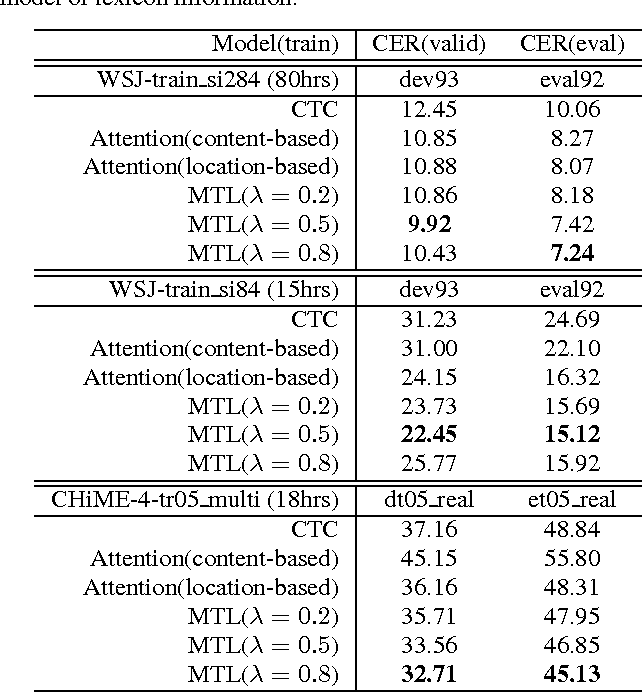 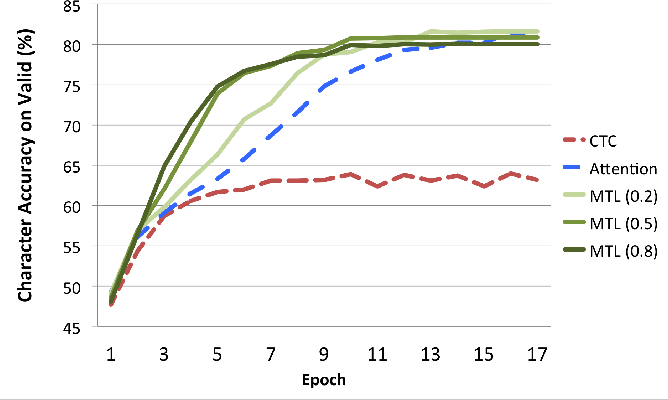 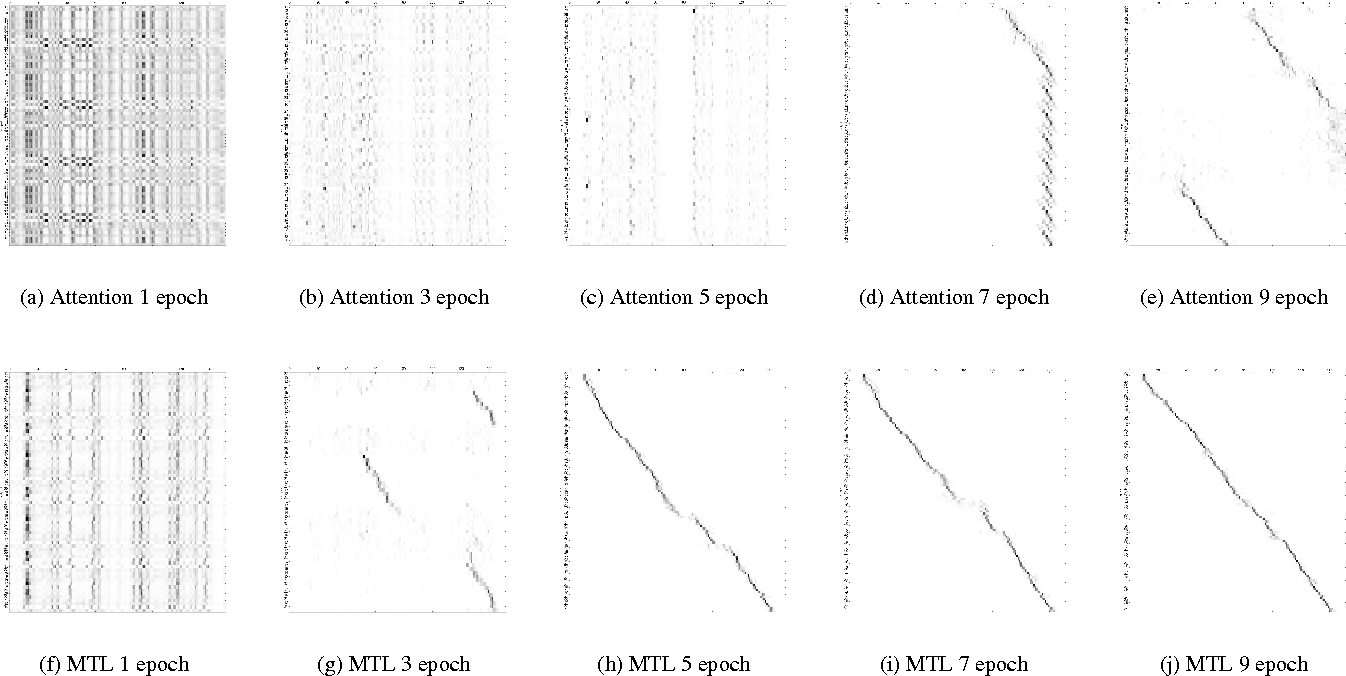 Recently, there has been an increasing interest in end-to-end speech recognition that directly transcribes speech to text without any predefined alignments. One approach is the attention-based encoder-decoder framework that learns a mapping between variable-length input and output sequences in one step using a purely data-driven method. The attention model has often been shown to improve the performance over another end-to-end approach, the Connectionist Temporal Classification (CTC), mainly because it explicitly uses the history of the target character without any conditional independence assumptions. However, we observed that the performance of the attention has shown poor results in noisy condition and is hard to learn in the initial training stage with long input sequences. This is because the attention model is too flexible to predict proper alignments in such cases due to the lack of left-to-right constraints as used in CTC. This paper presents a novel method for end-to-end speech recognition to improve robustness and achieve fast convergence by using a joint CTC-attention model within the multi-task learning framework, thereby mitigating the alignment issue. An experiment on the WSJ and CHiME-4 tasks demonstrates its advantages over both the CTC and attention-based encoder-decoder baselines, showing 5.4-14.6% relative improvements in Character Error Rate (CER). 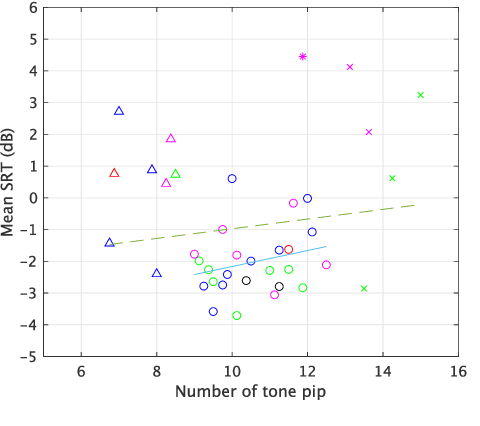 It is essential to perform speech intelligibility (SI) experiments with human listeners to evaluate the effectiveness of objective intelligibility measures. Recently crowdsourced remote testing has become popular to collect a massive amount and variety of data with relatively small cost and in short time. However, careful data screening is essential for attaining reliable SI data. We compared the results of laboratory and crowdsourced remote experiments to establish an effective data screening technique. We evaluated the SI of noisy speech sounds enhanced by a single-channel ideal ratio mask (IRM) and multi-channel mask-based beamformers. The results demonstrated that the SI scores were improved by these enhancement methods. In particular, the IRM-enhanced sounds were much better than the unprocessed and other enhanced sounds, indicating IRM enhancement may give the upper limit of speech enhancement performance. Moreover, tone pip tests, for which participants were asked to report the number of audible tone pips, reduced the variability of crowdsourced remote results so that the laboratory results became similar. Tone pip tests could be useful for future crowdsourced experiments because of their simplicity and effectiveness for data screening. 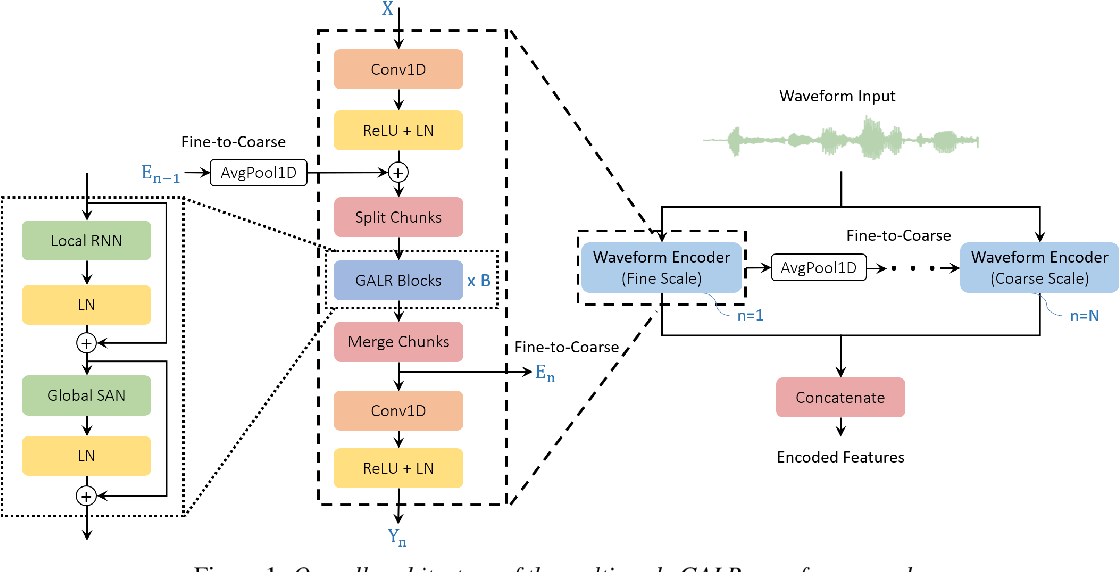 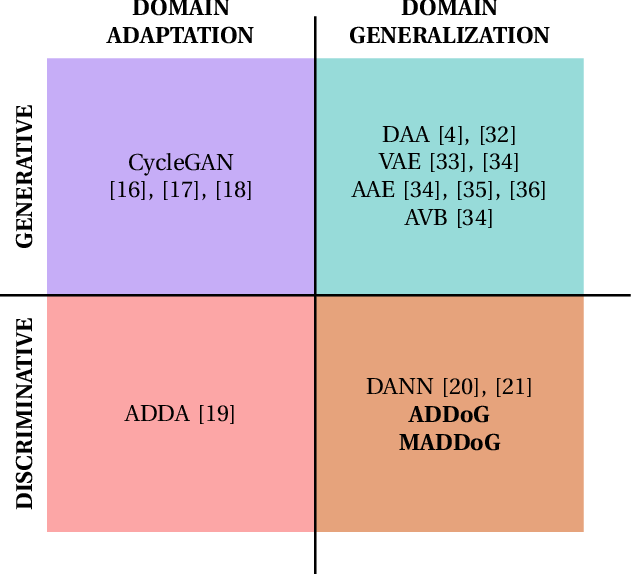 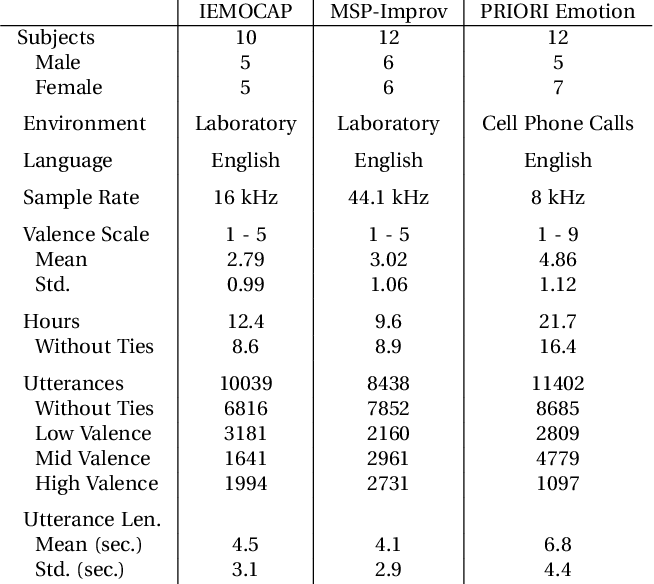 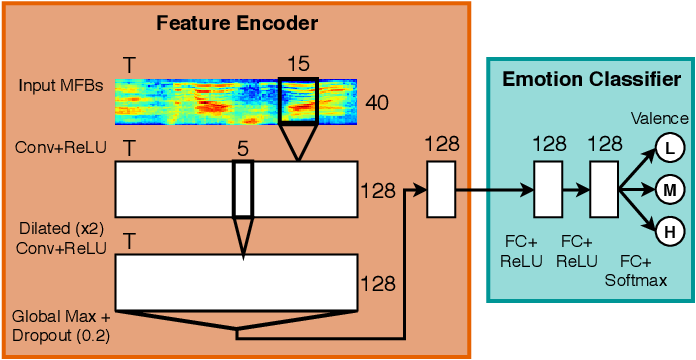 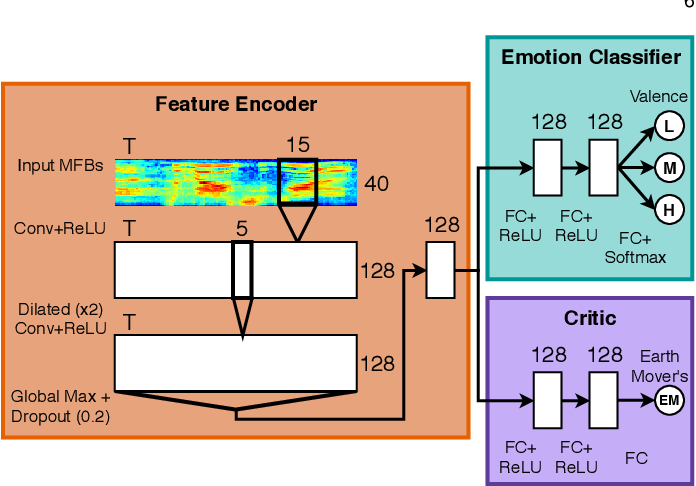 Automatic speech emotion recognition provides computers with critical context to enable user understanding. While methods trained and tested within the same dataset have been shown successful, they often fail when applied to unseen datasets. To address this, recent work has focused on adversarial methods to find more generalized representations of emotional speech. However, many of these methods have issues converging, and only involve datasets collected in laboratory conditions. In this paper, we introduce Adversarial Discriminative Domain Generalization (ADDoG), which follows an easier to train "meet in the middle" approach. The model iteratively moves representations learned for each dataset closer to one another, improving cross-dataset generalization. We also introduce Multiclass ADDoG, or MADDoG, which is able to extend the proposed method to more than two datasets, simultaneously. Our results show consistent convergence for the introduced methods, with significantly improved results when not using labels from the target dataset. We also show how, in most cases, ADDoG and MADDoG can be used to improve upon baseline state-of-the-art methods when target dataset labels are added and in-the-wild data are considered. Even though our experiments focus on cross-corpus speech emotion, these methods could be used to remove unwanted factors of variation in other settings.

We present improvements in automatic speech recognition (ASR) for Somali, a currently extremely under-resourced language. This forms part of a continuing United Nations (UN) effort to employ ASR-based keyword spotting systems to support humanitarian relief programmes in rural Africa. Using just 1.57 hours of annotated speech data as a seed corpus, we increase the pool of training data by applying semi-supervised training to 17.55 hours of untranscribed speech. We make use of factorised time-delay neural networks (TDNN-F) for acoustic modelling, since these have recently been shown to be effective in resource-scarce situations. Three semi-supervised training passes were performed, where the decoded output from each pass was used for acoustic model training in the subsequent pass. The automatic transcriptions from the best performing pass were used for language model augmentation. To ensure the quality of automatic transcriptions, decoder confidence is used as a threshold. The acoustic and language models obtained from the semi-supervised approach show significant improvement in terms of WER and perplexity compared to the baseline. Incorporating the automatically generated transcriptions yields a 6.55\% improvement in language model perplexity. The use of 17.55 hour of Somali acoustic data in semi-supervised training shows an improvement of 7.74\% relative over the baseline. 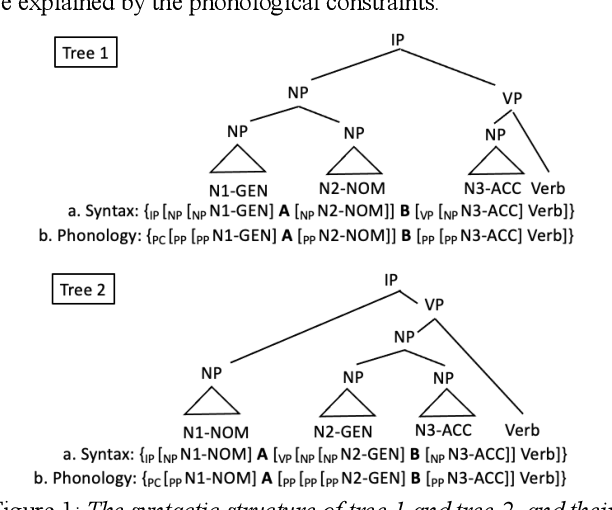 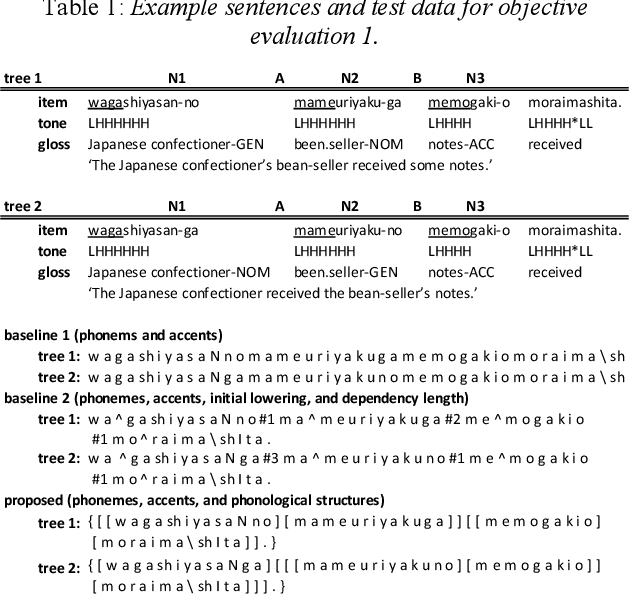 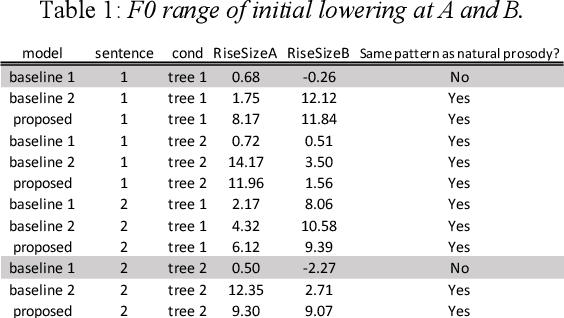 End-to-end text-to-speech synthesis (TTS), which generates speech sounds directly from strings of texts or phonemes, has improved the quality of speech synthesis over the conventional TTS. However, most previous studies have been evaluated based on subjective naturalness and have not objectively examined whether they can reproduce pitch patterns of phonological phenomena such as downstep, rhythmic boost, and initial lowering that reflect syntactic structures in Japanese. These phenomena can be linguistically explained by phonological constraints and the syntax$\unicode{x2013}$prosody mapping hypothesis (SPMH), which assumes projections from syntactic structures to phonological hierarchy. Although some experiments in psycholinguistics have verified the validity of the SPMH, it is crucial to investigate whether it can be implemented in TTS. To synthesize linguistic phenomena involving syntactic or phonological constraints, we propose a model using phonological symbols based on the SPMH and prosodic well-formedness constraints. Experimental results showed that the proposed method synthesized similar pitch patterns to those reported in linguistics experiments for the phenomena of initial lowering and rhythmic boost. The proposed model efficiently synthesizes phonological phenomena in the test data that were not explicitly included in the training data. 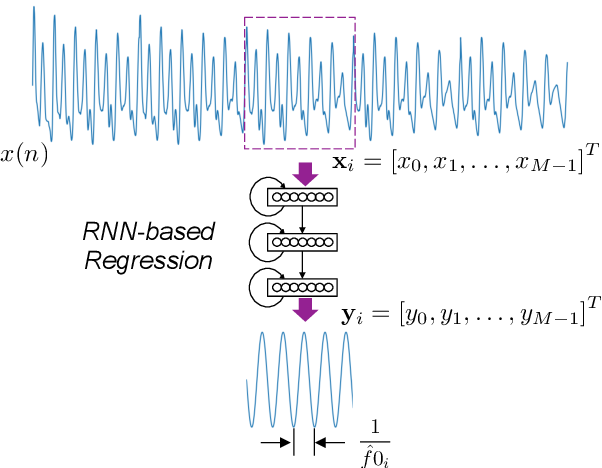 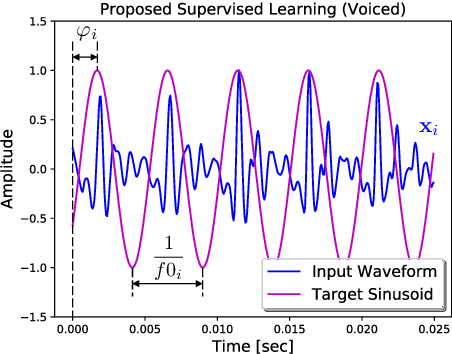 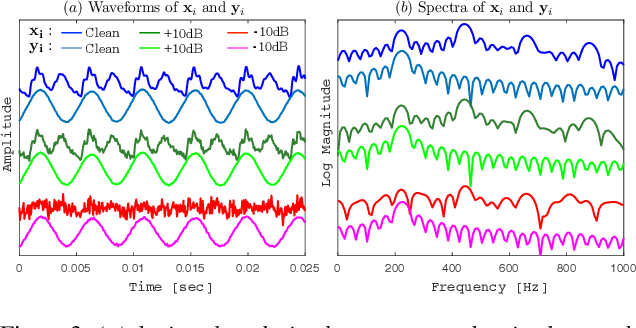 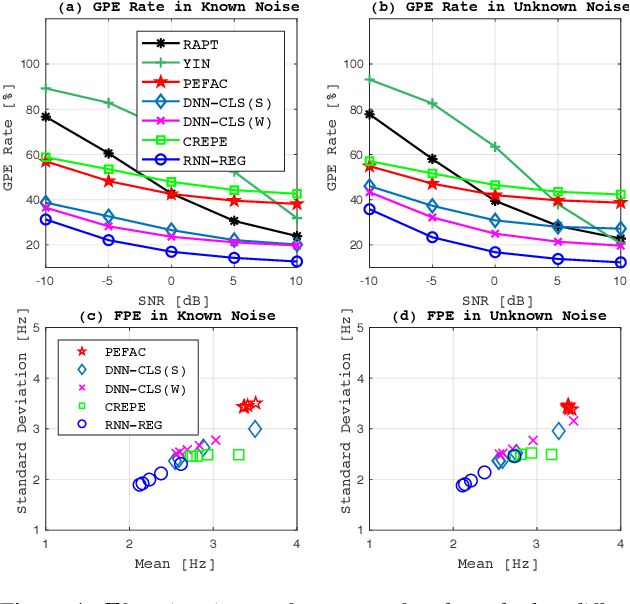 The fundamental frequency (F0) represents pitch in speech that determines prosodic characteristics of speech and is needed in various tasks for speech analysis and synthesis. Despite decades of research on this topic, F0 estimation at low signal-to-noise ratios (SNRs) in unexpected noise conditions remains difficult. This work proposes a new approach to noise robust F0 estimation using a recurrent neural network (RNN) trained in a supervised manner. Recent studies employ deep neural networks (DNNs) for F0 tracking as a frame-by-frame classification task into quantised frequency states but we propose waveform-to-sinusoid regression instead to achieve both noise robustness and accurate estimation with increased frequency resolution. Experimental results with PTDB-TUG corpus contaminated by additive noise (NOISEX-92) demonstrate that the proposed method improves gross pitch error (GPE) rate and fine pitch error (FPE) by more than 35 % at SNRs between -10 dB and +10 dB compared with well-known noise robust F0 tracker, PEFAC. Furthermore, the proposed method also outperforms state-of-the-art DNN-based approaches by more than 15 % in terms of both FPE and GPE rate over the preceding SNR range.


* Accepted by peer reviewing for Interspeech 2018 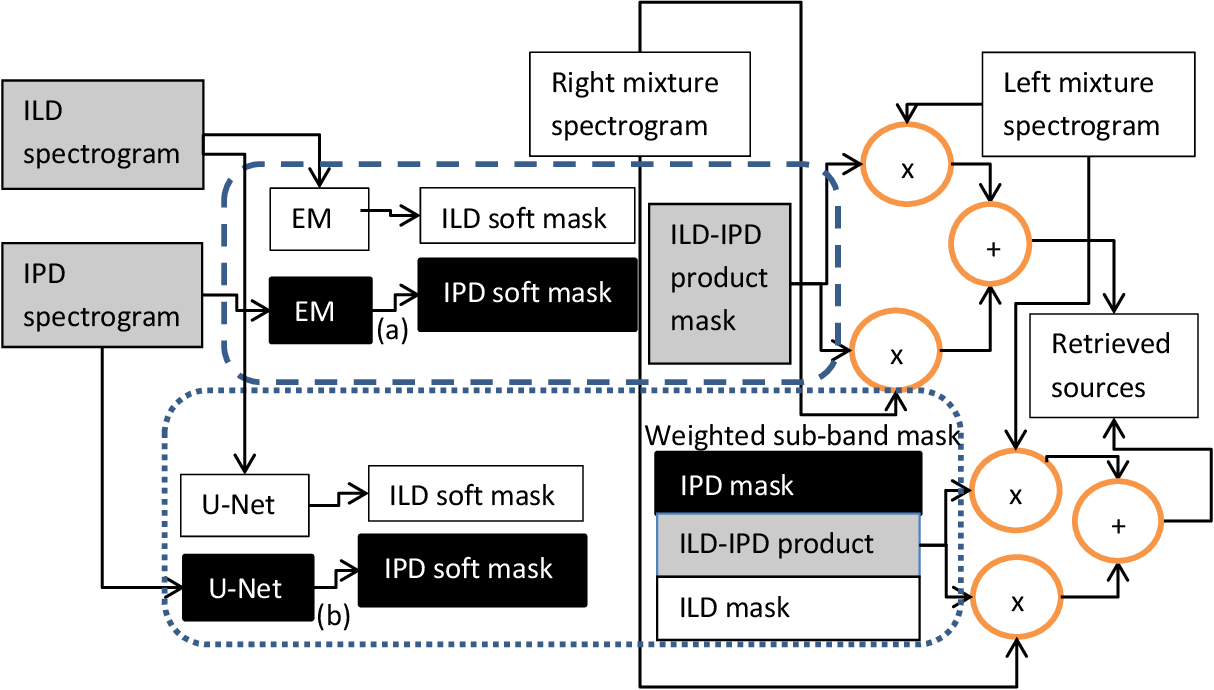 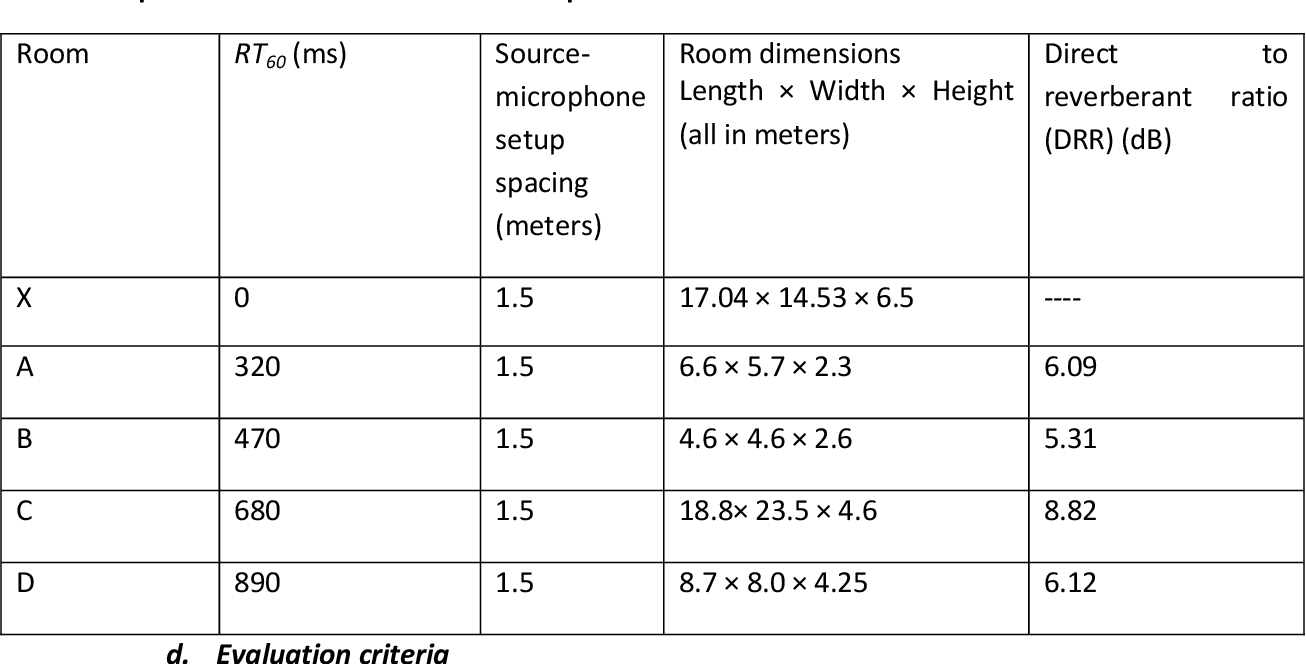 In this paper, we formulate a blind source separation (BSS) framework, which allows integrating U-Net based deep learning source separation network with probabilistic spatial machine learning expectation maximization (EM) algorithm for separating speech in reverberant conditions. Our proposed model uses a pre-trained deep learning convolutional neural network, U-Net, for clustering the interaural level difference (ILD) cues and machine learning expectation maximization (EM) algorithm for clustering the interaural phase difference (IPD) cues. The integrated model exploits the complementary strengths of the two approaches to BSS: the strong modeling power of supervised neural networks and the ease of unsupervised machine learning algorithms, whose few parameters can be estimated on as little as a single segment of an audio mixture. The results show an average improvement of 4.3 dB in signal to distortion ratio (SDR) and 4.3% in short time speech intelligibility (STOI) over the EM based source separation algorithm MESSL-GS (model-based expectation-maximization source separation and localization with garbage source) and 4.5 dB in SDR and 8% in STOI over deep learning convolutional neural network (U-Net) based speech separation algorithm SONET under the reverberant conditions ranging from anechoic to those mostly encountered in the real world.