Emotions play a central role in the social life of every human being, and their study, which represents a multidisciplinary subject, embraces a great variety of research fields. Especially concerning the latter, the analysis of facial expressions represents a very active research area due to its relevance to human-computer interaction applications. In such a context, Facial Expression Recognition (FER) is the task of recognizing expressions on human faces. Typically, face images are acquired by cameras that have, by nature, different characteristics, such as the output resolution. It has been already shown in the literature that Deep Learning models applied to face recognition experience a degradation in their performance when tested against multi-resolution scenarios. Since the FER task involves analyzing face images that can be acquired with heterogeneous sources, thus involving images with different quality, it is plausible to expect that resolution plays an important role in such a case too. Stemming from such a hypothesis, we prove the benefits of multi-resolution training for models tasked with recognizing facial expressions. Hence, we propose a two-step learning procedure, named MAFER, to train DCNNs to empower them to generate robust predictions across a wide range of resolutions. A relevant feature of MAFER is that it is task-agnostic, i.e., it can be used complementarily to other objective-related techniques. To assess the effectiveness of the proposed approach, we performed an extensive experimental campaign on publicly available datasets: \fer{}, \raf{}, and \oulu{}. For a multi-resolution context, we observe that with our approach, learning models improve upon the current SotA while reporting comparable results in fix-resolution contexts. Finally, we analyze the performance of our models and observe the higher discrimination power of deep features generated from them. 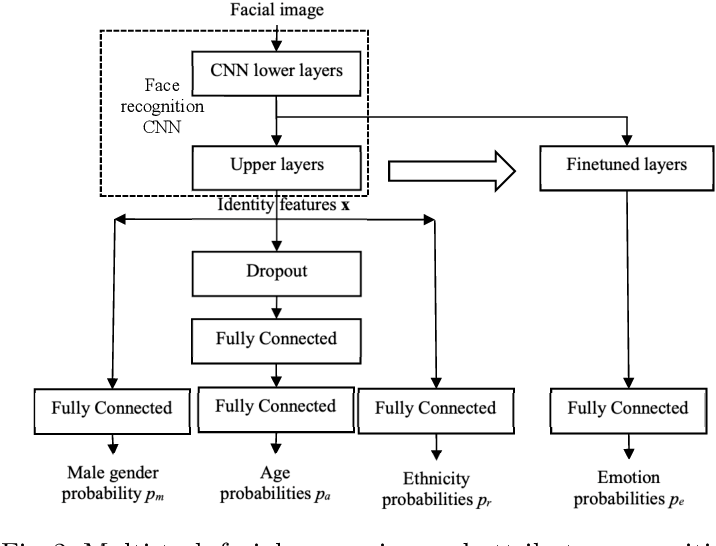 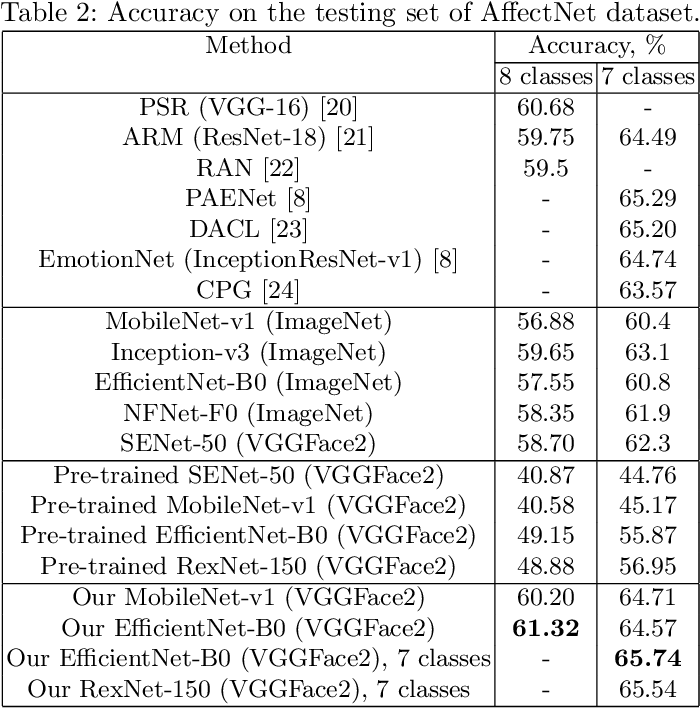 In this paper, we examine the multi-task training of lightweight convolutional neural networks for face identification and classification of facial attributes (age, gender, ethnicity) trained on cropped faces without margins. It is shown that it is still necessary to fine-tune these networks in order to predict facial expressions. Several models are presented based on MobileNet, EfficientNet and RexNet architectures. It was experimentally demonstrated that our models are characterized by the state-of-the-art emotion classification accuracy on AffectNet dataset and near state-of-the-art results in age, gender and race recognition for UTKFace dataset. Moreover, it is shown that the usage of our neural network as a feature extractor of facial regions in video frames and concatenation of several statistical functions (mean, max, etc.) leads to 4.5\% higher accuracy than the previously known state-of-the-art single models for AFEW and VGAF datasets from the EmotiW challenges. The models and source code are publicly available at https://github.com/HSE-asavchenko/face-emotion-recognition. 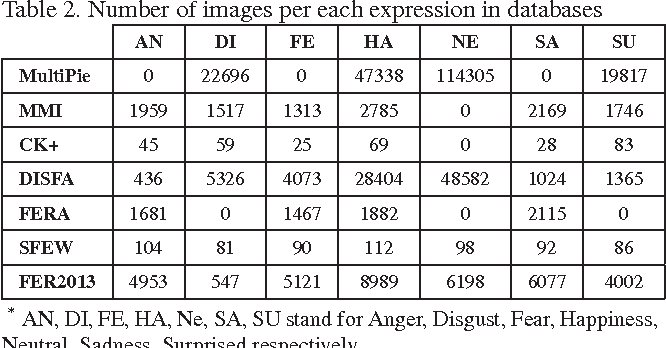 Automated Facial Expression Recognition (FER) has remained a challenging and interesting problem. Despite efforts made in developing various methods for FER, existing approaches traditionally lack generalizability when applied to unseen images or those that are captured in wild setting. Most of the existing approaches are based on engineered features (e.g. HOG, LBPH, and Gabor) where the classifier's hyperparameters are tuned to give best recognition accuracies across a single database, or a small collection of similar databases. Nevertheless, the results are not significant when they are applied to novel data. This paper proposes a deep neural network architecture to address the FER problem across multiple well-known standard face datasets. Specifically, our network consists of two convolutional layers each followed by max pooling and then four Inception layers. The network is a single component architecture that takes registered facial images as the input and classifies them into either of the six basic or the neutral expressions. We conducted comprehensive experiments on seven publically available facial expression databases, viz. MultiPIE, MMI, CK+, DISFA, FERA, SFEW, and FER2013. The results of proposed architecture are comparable to or better than the state-of-the-art methods and better than traditional convolutional neural networks and in both accuracy and training time. 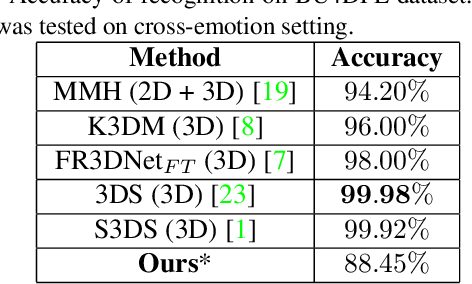 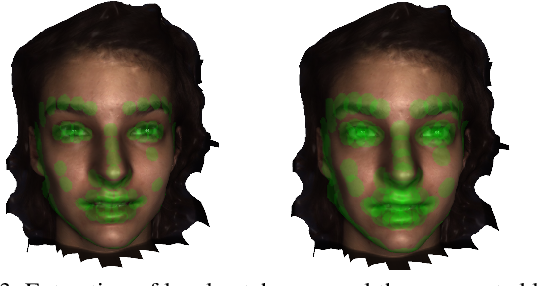 Face identification/recognition has significantly advanced over the past years. However, most of the proposed approaches rely on static RGB frames and on neutral facial expressions. This has two disadvantages. First, important facial shape cues are ignored. Second, facial deformations due to expressions can have an impact on the performance of such a method. In this paper, we propose a novel framework for dynamic 3D face identification/recognition based on facial keypoints. Each dynamic sequence of facial expressions is represented as a spatio-temporal graph, which is constructed using 3D facial landmarks. Each graph node contains local shape and texture features that are extracted from its neighborhood. For the classification/identification of faces, a Spatio-temporal Graph Convolutional Network (ST-GCN) is used. Finally, we evaluate our approach on a challenging dynamic 3D facial expression dataset.

THIN: THrowable Information Networks and Application for Facial Expression Recognition In The Wild 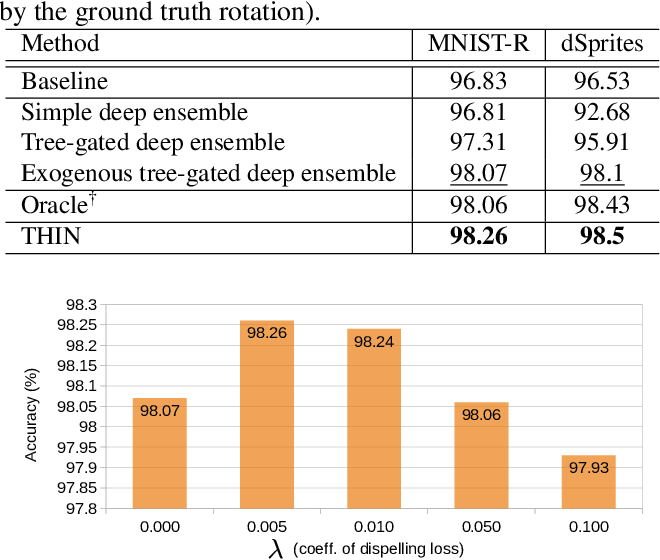 Learning Facial Representations from the Cycle-consistency of Face 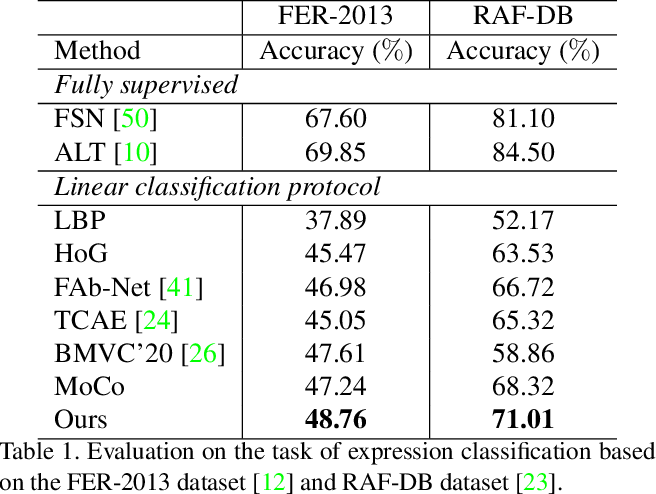 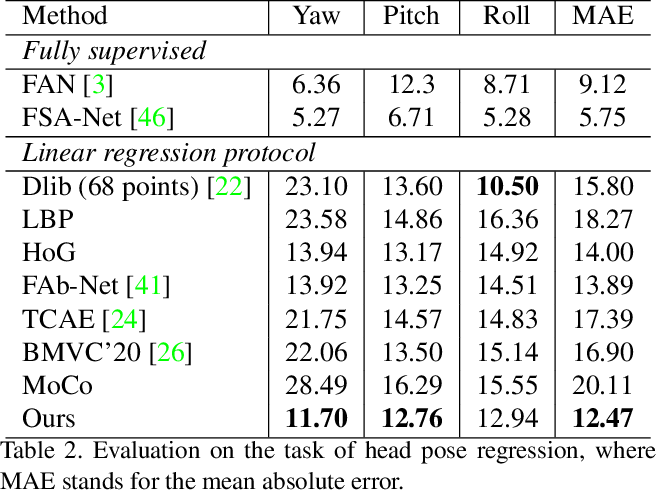 Faces manifest large variations in many aspects, such as identity, expression, pose, and face styling. Therefore, it is a great challenge to disentangle and extract these characteristics from facial images, especially in an unsupervised manner. In this work, we introduce cycle-consistency in facial characteristics as free supervisory signal to learn facial representations from unlabeled facial images. The learning is realized by superimposing the facial motion cycle-consistency and identity cycle-consistency constraints. The main idea of the facial motion cycle-consistency is that, given a face with expression, we can perform de-expression to a neutral face via the removal of facial motion and further perform re-expression to reconstruct back to the original face. The main idea of the identity cycle-consistency is to exploit both de-identity into mean face by depriving the given neutral face of its identity via feature re-normalization and re-identity into neutral face by adding the personal attributes to the mean face. At training time, our model learns to disentangle two distinct facial representations to be useful for performing cycle-consistent face reconstruction. At test time, we use the linear protocol scheme for evaluating facial representations on various tasks, including facial expression recognition and head pose regression. We also can directly apply the learnt facial representations to person recognition, frontalization and image-to-image translation. Our experiments show that the results of our approach is competitive with those of existing methods, demonstrating the rich and unique information embedded in the disentangled representations. Code is available at https://github.com/JiaRenChang/FaceCycle . 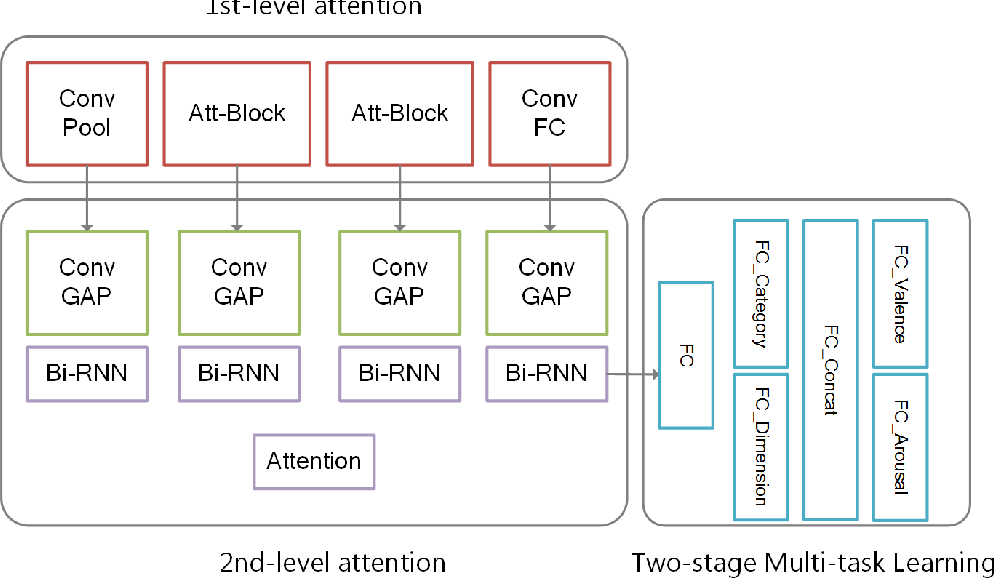 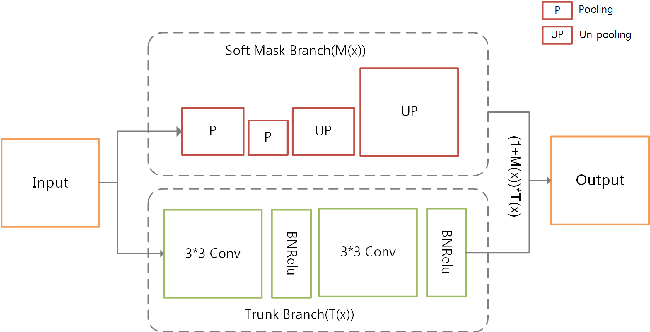 Compared with facial emotion recognition on categorical model, the dimensional emotion recognition can describe numerous emotions of the real world more accurately. Most prior works of dimensional emotion estimation only considered laboratory data and used video, speech or other multi-modal features. The effect of these methods applied on static images in the real world is unknown. In this paper, a two-level attention with two-stage multi-task learning (2Att-2Mt) framework is proposed for facial emotion estimation on only static images. Firstly, the features of corresponding region(position-level features) are extracted and enhanced automatically by first-level attention mechanism. In the following, we utilize Bi-directional Recurrent Neural Network(Bi-RNN) with self-attention(second-level attention) to make full use of the relationship features of different layers(layer-level features) adaptively. Owing to the inherent complexity of dimensional emotion recognition, we propose a two-stage multi-task learning structure to exploited categorical representations to ameliorate the dimensional representations and estimate valence and arousal simultaneously in view of the correlation of the two targets. The quantitative results conducted on AffectNet dataset show significant advancement on Concordance Correlation Coefficient(CCC) and Root Mean Square Error(RMSE), illustrating the superiority of the proposed framework. Besides, extensive comparative experiments have also fully demonstrated the effectiveness of different components. 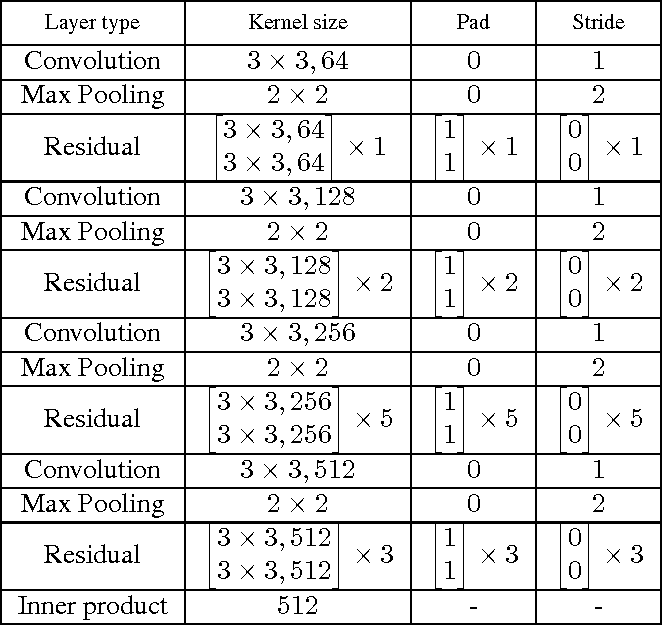 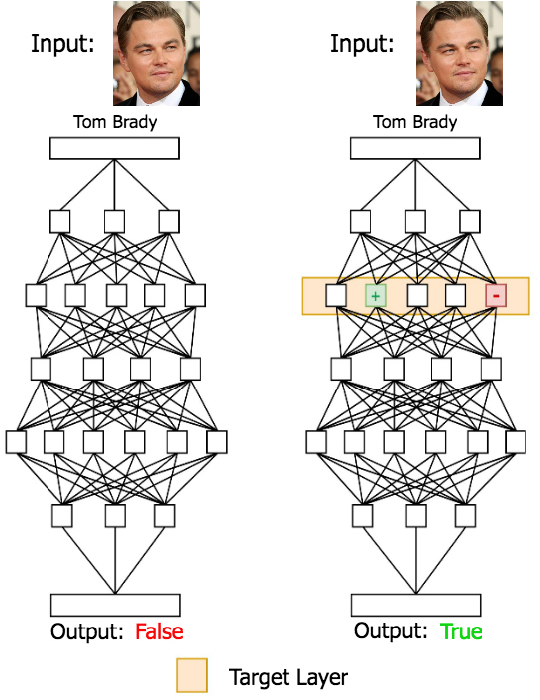 We present a new type of backdoor attack that exploits a vulnerability of convolutional neural networks (CNNs) that has been previously unstudied. In particular, we examine the application of facial recognition. Deep learning techniques are at the top of the game for facial recognition, which means they have now been implemented in many production-level systems. Alarmingly, unlike other commercial technologies such as operating systems and network devices, deep learning-based facial recognition algorithms are not presently designed with security requirements or audited for security vulnerabilities before deployment. Given how young the technology is and how abstract many of the internal workings of these algorithms are, neural network-based facial recognition systems are prime targets for security breaches. As more and more of our personal information begins to be guarded by facial recognition (e.g., the iPhone X), exploring the security vulnerabilities of these systems from a penetration testing standpoint is crucial. Along these lines, we describe a general methodology for backdooring CNNs via targeted weight perturbations. Using a five-layer CNN and ResNet-50 as case studies, we show that an attacker is able to significantly increase the chance that inputs they supply will be falsely accepted by a CNN while simultaneously preserving the error rates for legitimate enrolled classes. 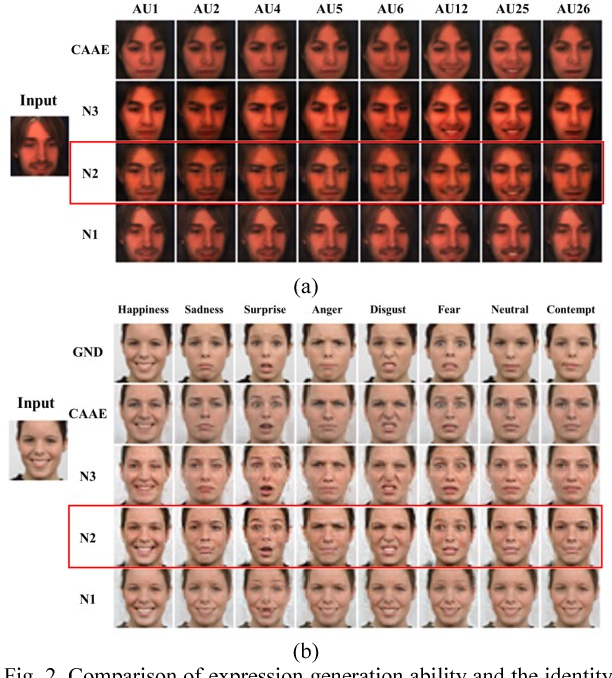 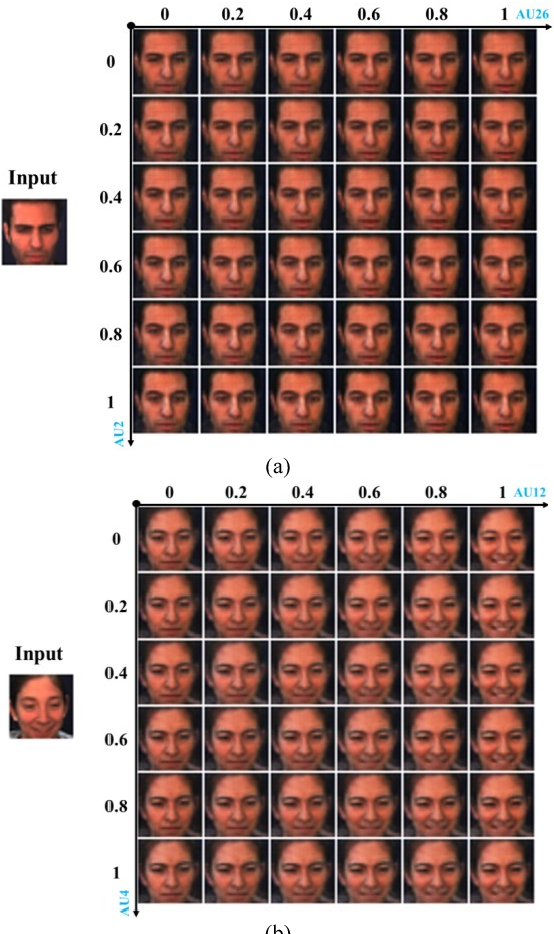 Photorealistic facial expression synthesis from single face image can be widely applied to face recognition, data augmentation for emotion recognition or entertainment. This problem is challenging, in part due to a paucity of labeled facial expression data, making it difficult for algorithms to disambiguate changes due to identity and changes due to expression. In this paper, we propose the conditional difference adversarial autoencoder, CDAAE, for facial expression synthesis. The CDAAE takes a facial image of a previously unseen person and generates an image of that human face with a target emotion or facial action unit label. The CDAAE adds a feedforward path to an autoencoder structure connecting low level features at the encoder to features at the corresponding level at the decoder. It handles the problem of disambiguating changes due to identity and changes due to facial expression by learning to generate the difference between low-level features of images of the same person but with different facial expressions. The CDAAE structure can be used to generate novel expressions by combining and interpolating between facial expressions/action units within the training set. Our experimental results demonstrate that the CDAAE can preserve identity information when generating facial expression for unseen subjects more faithfully than previous approaches. This is especially advantageous when training with small databases.