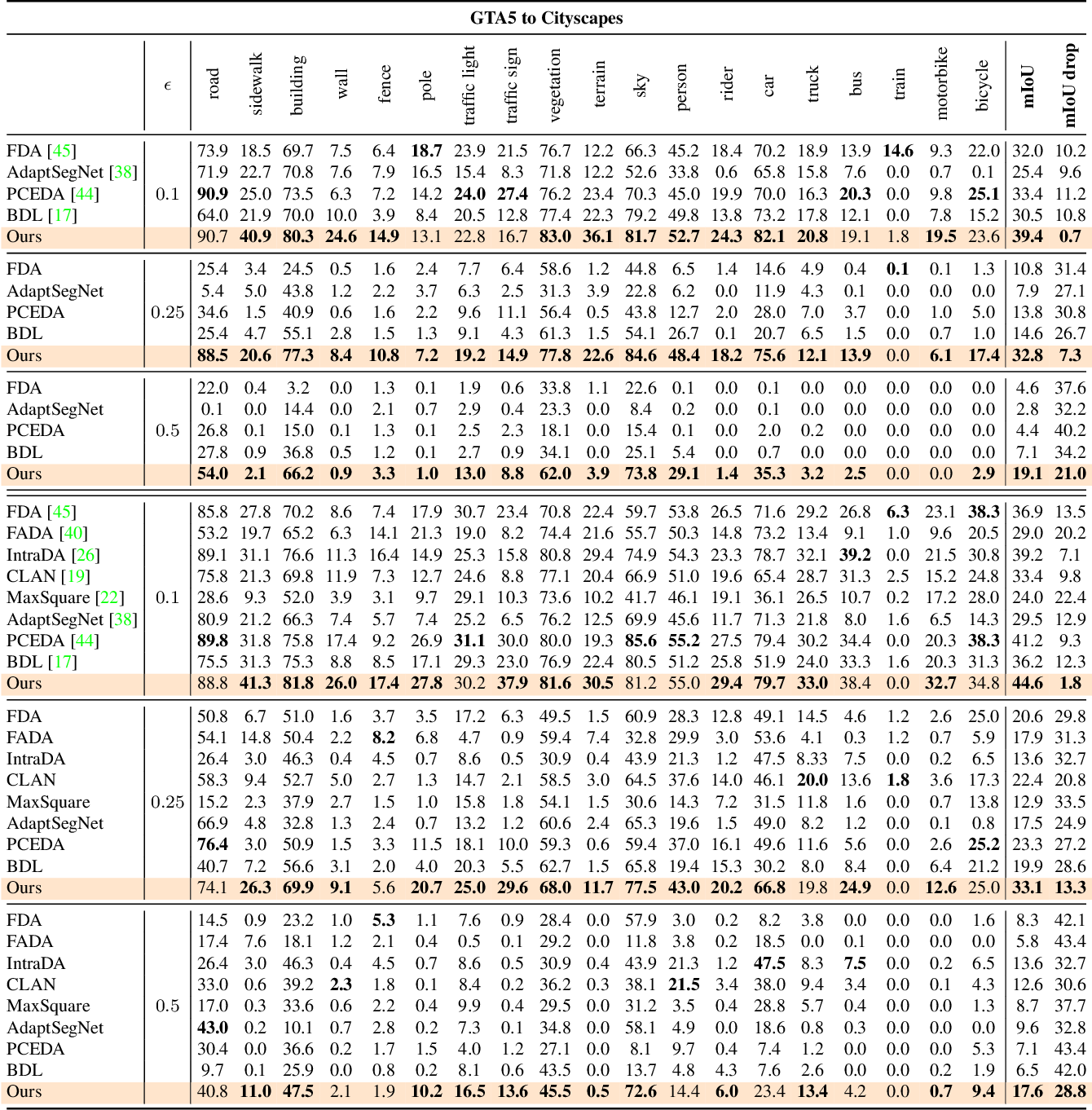 Recent studies imply that deep neural networks are vulnerable to adversarial examples -- inputs with a slight but intentional perturbation are incorrectly classified by the network. Such vulnerability makes it risky for some security-related applications (e.g., semantic segmentation in autonomous cars) and triggers tremendous concerns on the model reliability. For the first time, we comprehensively evaluate the robustness of existing UDA methods and propose a robust UDA approach. It is rooted in two observations: (i) the robustness of UDA methods in semantic segmentation remains unexplored, which pose a security concern in this field; and (ii) although commonly used self-supervision (e.g., rotation and jigsaw) benefits image tasks such as classification and recognition, they fail to provide the critical supervision signals that could learn discriminative representation for segmentation tasks. These observations motivate us to propose adversarial self-supervision UDA (or ASSUDA) that maximizes the agreement between clean images and their adversarial examples by a contrastive loss in the output space. Extensive empirical studies on commonly used benchmarks demonstrate that ASSUDA is resistant to adversarial attacks. 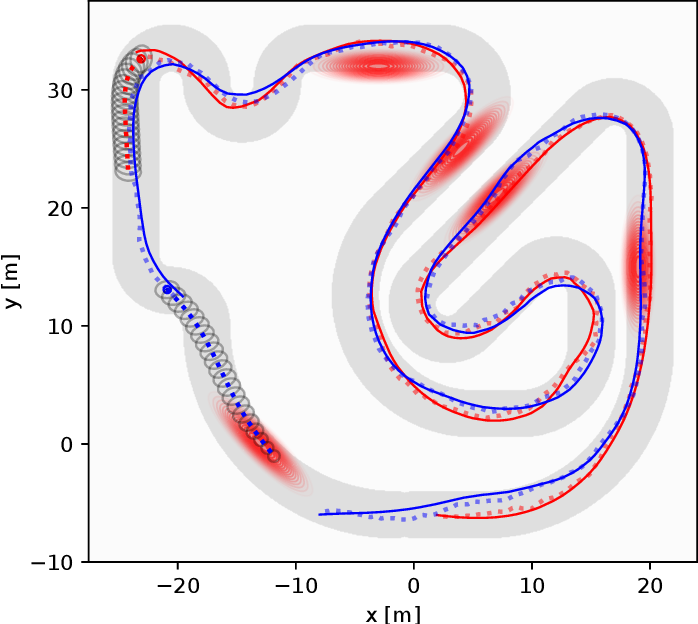 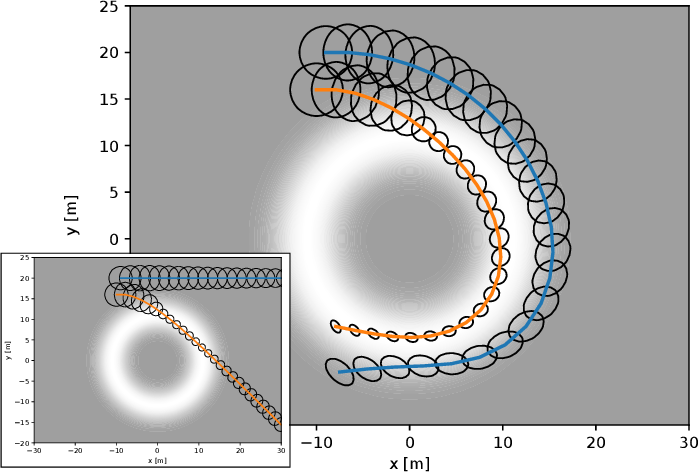 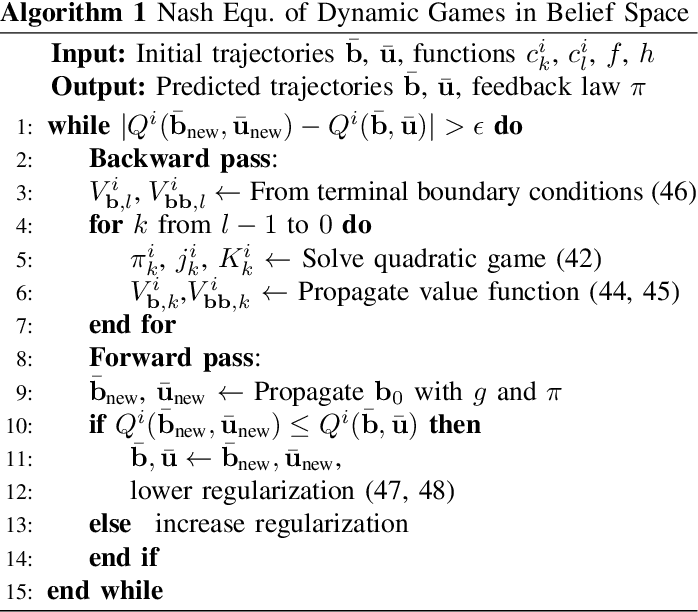 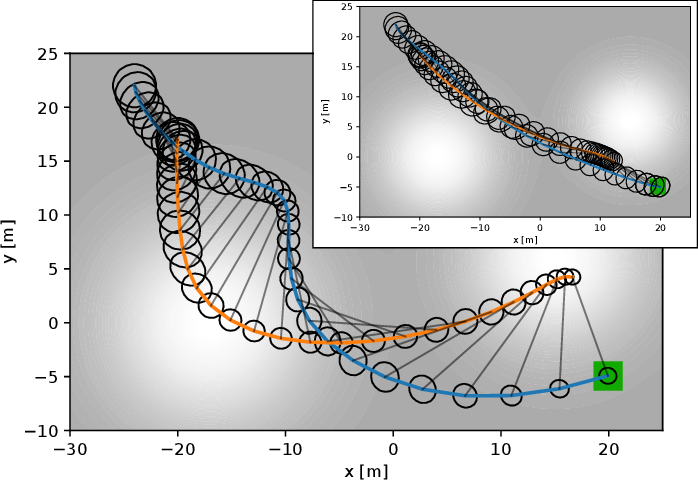 Information gathering while interacting with other agents is critical in many emerging domains, such as self-driving cars, service robots, drone racing, and active surveillance. In these interactions, the interests of agents may be at odds with others, resulting in a non-cooperative dynamic game. Since unveiling one's own strategy to adversaries is undesirable, each agent must independently predict the other agents' future actions without communication. In the face of uncertainty from sensor and actuator noise, agents have to gain information over their own state, the states of others, and the environment. They must also consider how their own actions reveal information to others. We formulate this non-cooperative multi-agent planning problem as a stochastic dynamic game. Our solution uses local iterative dynamic programming in the belief space to find a Nash equilibrium of the game. We present three applications: active surveillance, guiding eyes for a blind agent, and autonomous racing. Agents with game-theoretic belief space planning win 44% more races compared to a baseline without game theory and 34% more than without belief space planning. 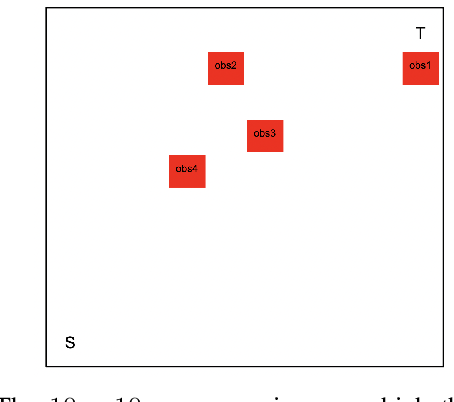 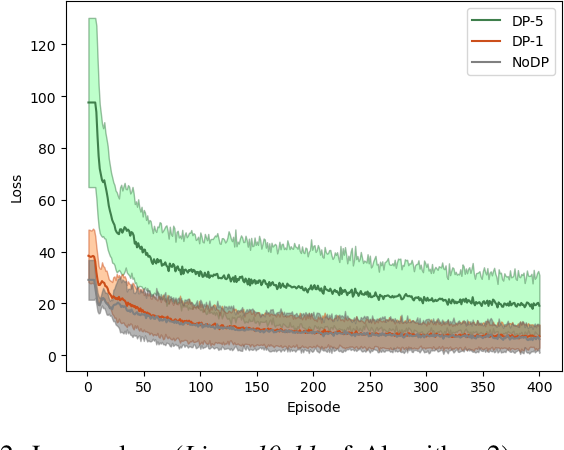 Cyber and cyber-physical systems equipped with machine learning algorithms such as autonomous cars share environments with humans. In such a setting, it is important to align system (or agent) behaviors with the preferences of one or more human users. We consider the case when an agent has to learn behaviors in an unknown environment. Our goal is to capture two defining characteristics of humans: i) a tendency to assess and quantify risk, and ii) a desire to keep decision making hidden from external parties. We incorporate cumulative prospect theory (CPT) into the objective of a reinforcement learning (RL) problem for the former. For the latter, we use differential privacy. We design an algorithm to enable an RL agent to learn policies to maximize a CPT-based objective in a privacy-preserving manner and establish guarantees on the privacy of value functions learned by the algorithm when rewards are sufficiently close. This is accomplished through adding a calibrated noise using a Gaussian process mechanism at each step. Through empirical evaluations, we highlight a privacy-utility tradeoff and demonstrate that the RL agent is able to learn behaviors that are aligned with that of a human user in the same environment in a privacy-preserving manner 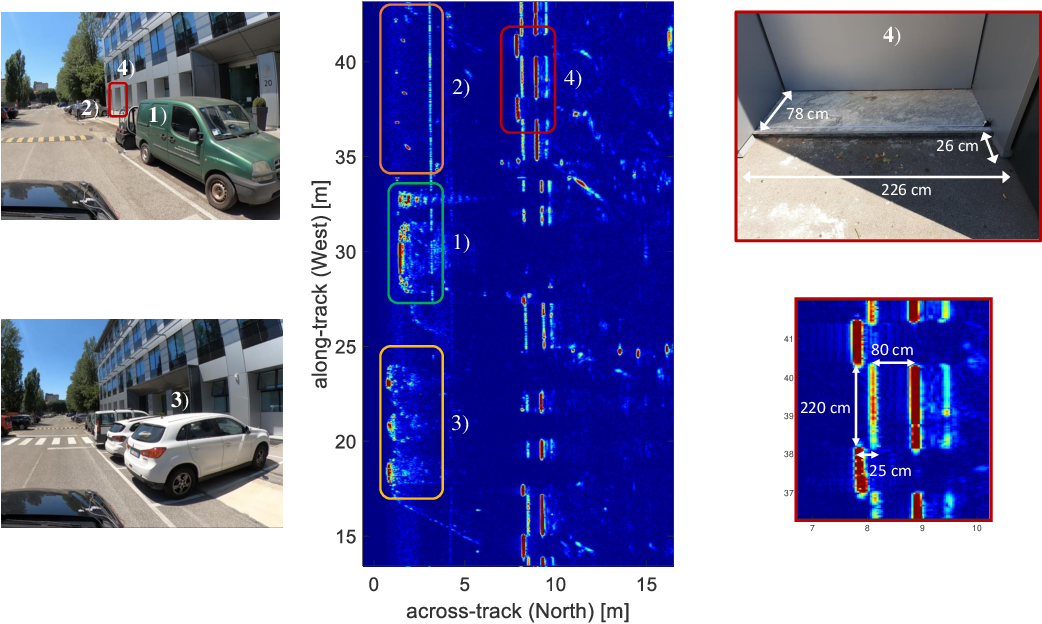 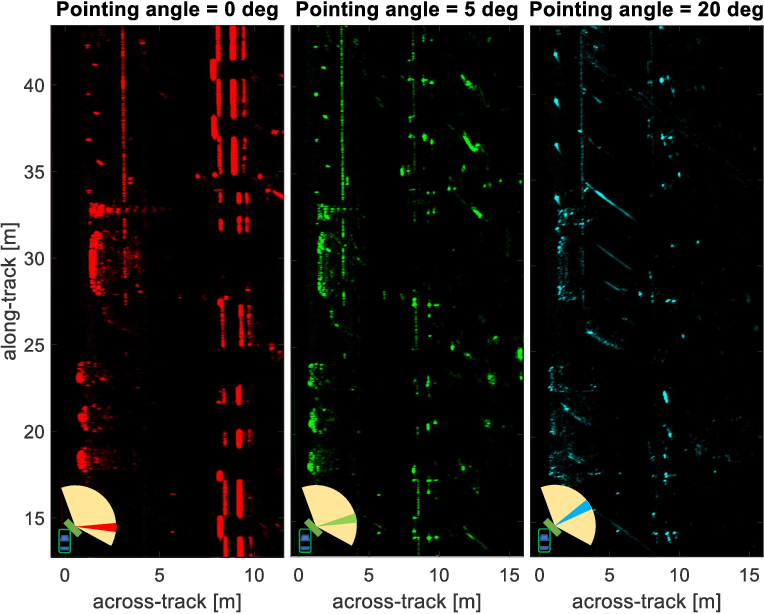 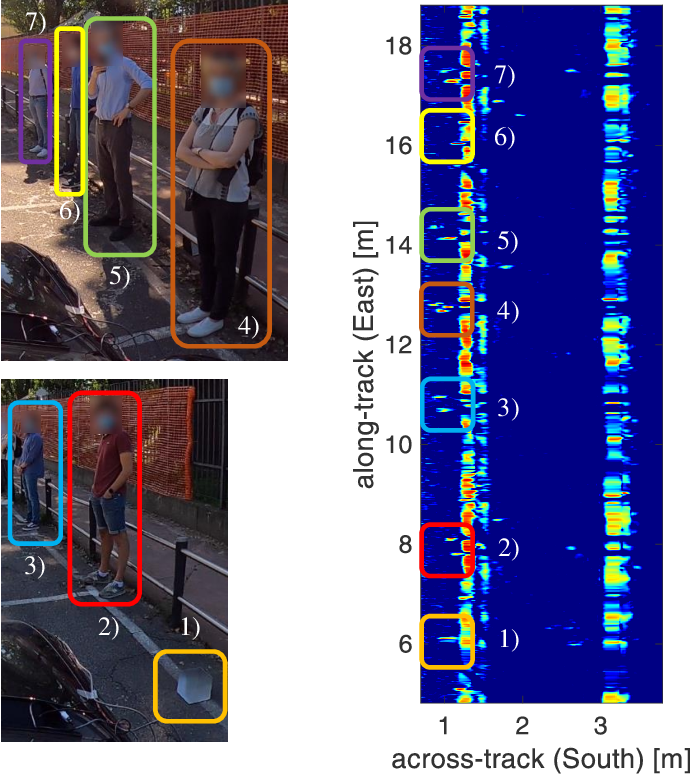 Automotive synthetic aperture radar (SAR) systems are rapidly emerging as a candidate technological solution to enable a high-resolution environment mapping for autonomous driving. Compared to lidars and cameras, automotive-legacy radars can work in any weather condition and without an external source of illumination, but are limited in either range or angular resolution. SARs offer a relevant increase in angular resolution, provided that the ego-motion of the radar platform is known along the synthetic aperture. In this paper, we present the results of an experimental campaign aimed at assessing the potential of a multi-beam SAR imaging in an urban scenario, composed of various targets (buildings, cars, pedestrian, etc.), employing a 77 GHz multiple-input multiple-output (MIMO) radar platform based on a mass-market available automotive-grade technology. The results highlight a centimeter-level accuracy of the SAR images in realistic driving conditions, showing the possibility to use a multi-angle focusing approach to detect and discriminate between different targets based on their angular scattering response. 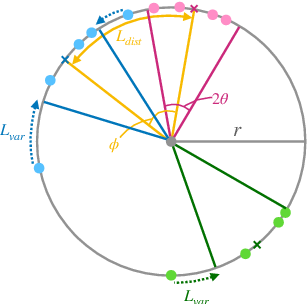 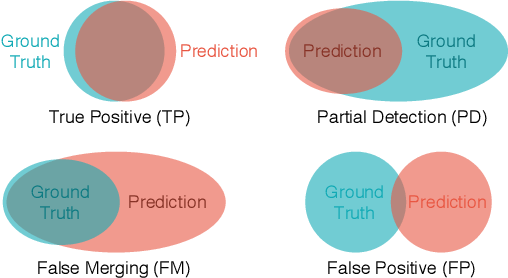 Instance segmentation on 3D point clouds is one of the most extensively researched areas toward the realization of autonomous cars and robots. Certain existing studies have split input point clouds into small regions such as 1m x 1m; one reason for this is that models in the studies cannot consume a large number of points because of the large space complexity. However, because such small regions occasionally include a very small number of instances belonging to the same class, an evaluation using existing metrics such as mAP is largely affected by the category recognition performance. To address these problems, we propose a new method with space complexity O(Np) such that large regions can be consumed, as well as novel metrics for tasks that are independent of the categories or size of the inputs. Our method learns a mapping from input point clouds to an embedding space, where the embeddings form clusters for each instance and distinguish instances using these clusters during testing. Our method achieves state-of-the-art performance using both existing and the proposed metrics. Moreover, we show that our new metric can evaluate the performance of a task without being affected by any other condition. 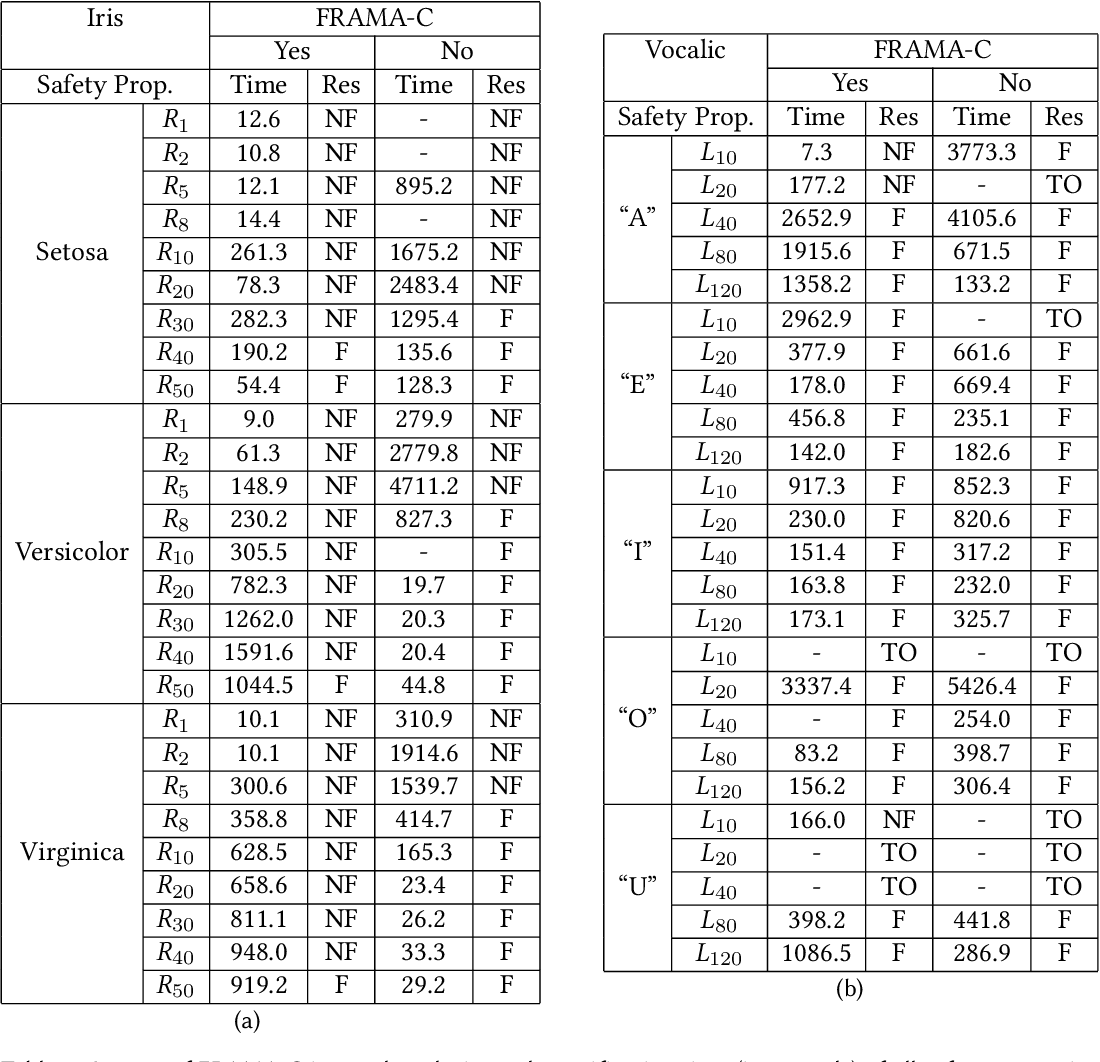 Artificial Neural Networks (ANNs) are being deployed on an increasing number of safety-critical applications, including autonomous cars and medical diagnosis. However, concerns about their reliability have been raised due to their black-box nature and apparent fragility to adversarial attacks. Here, we develop and evaluate a symbolic verification framework using incremental model checking (IMC) and satisfiability modulo theories (SMT) to check for vulnerabilities in ANNs. More specifically, we propose several ANN-related optimizations for IMC, including invariant inference via interval analysis and the discretization of non-linear activation functions. With this, we can provide guarantees on the safe behavior of ANNs implemented both in floating-point and fixed-point (quantized) arithmetic. In this regard, our verification approach was able to verify and produce adversarial examples for 52 test cases spanning image classification and general machine learning applications. For small- to medium-sized ANN, our approach completes most of its verification runs in minutes. Moreover, in contrast to most state-of-the-art methods, our approach is not restricted to specific choices of activation functions or non-quantized representations. 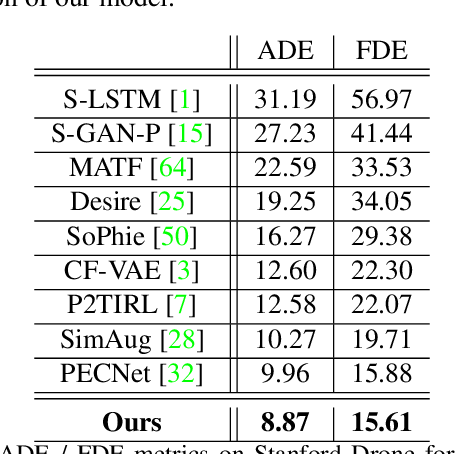 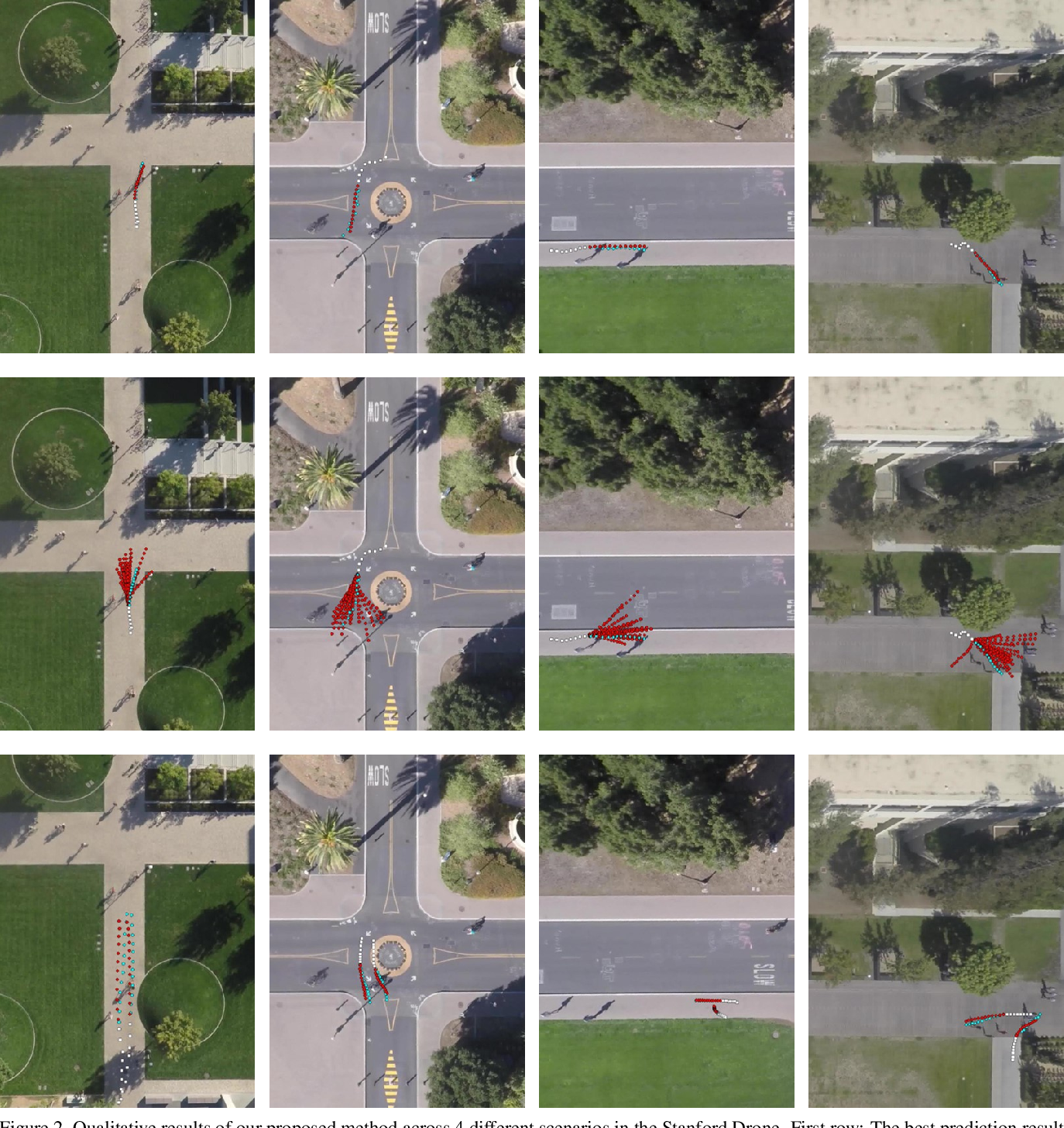 Human trajectory prediction is critical for autonomous platforms like self-driving cars or social robots. We present a latent belief energy-based model (LB-EBM) for diverse human trajectory forecast. LB-EBM is a probabilistic model with cost function defined in the latent space to account for the movement history and social context. The low-dimensionality of the latent space and the high expressivity of the EBM make it easy for the model to capture the multimodality of pedestrian trajectory distributions. LB-EBM is learned from expert demonstrations (i.e., human trajectories) projected into the latent space. Sampling from or optimizing the learned LB-EBM yields a belief vector which is used to make a path plan, which then in turn helps to predict a long-range trajectory. The effectiveness of LB-EBM and the two-step approach are supported by strong empirical results. Our model is able to make accurate, multi-modal, and social compliant trajectory predictions and improves over prior state-of-the-arts performance on the Stanford Drone trajectory prediction benchmark by 10.9% and on the ETH-UCY benchmark by 27.6%. 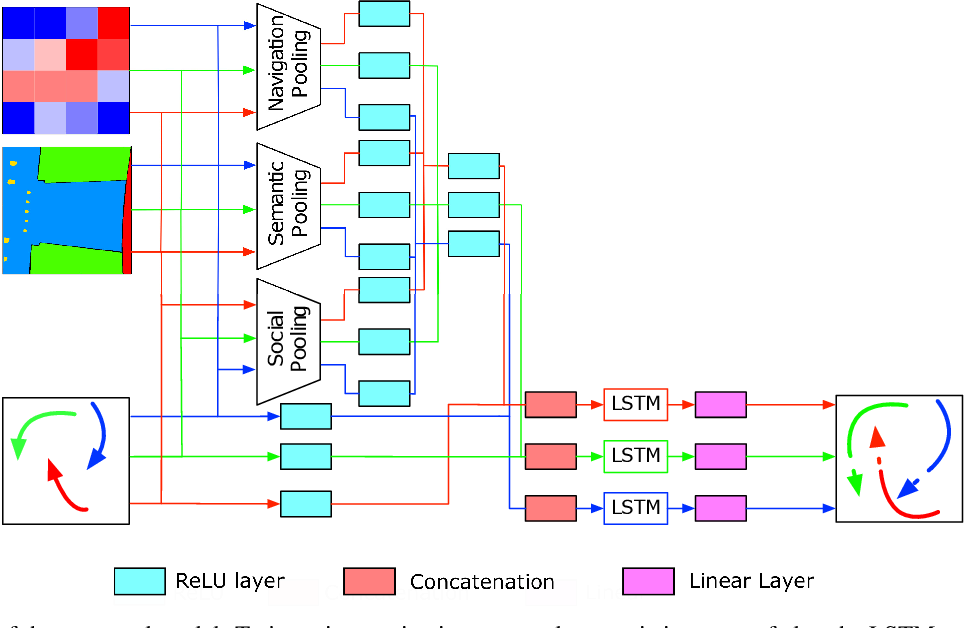 Mimicking human ability to forecast future positions or interpret complex interactions in urban scenarios, such as streets, shopping malls or squares, is essential to develop socially compliant robots or self-driving cars. Autonomous systems may gain advantage on anticipating human motion to avoid collisions or to naturally behave alongside people. To foresee plausible trajectories, we construct an LSTM (long short-term memory)-based model considering three fundamental factors: people interactions, past observations in terms of previously crossed areas and semantics of surrounding space. Our model encompasses several pooling mechanisms to join the above elements defining multiple tensors, namely social, navigation and semantic tensors. The network is tested in unstructured environments where complex paths emerge according to both internal (intentions) and external (other people, not accessible areas) motivations. As demonstrated, modeling paths unaware of social interactions or context information, is insufficient to correctly predict future positions. Experimental results corroborate the effectiveness of the proposed framework in comparison to LSTM-based models for human path prediction. 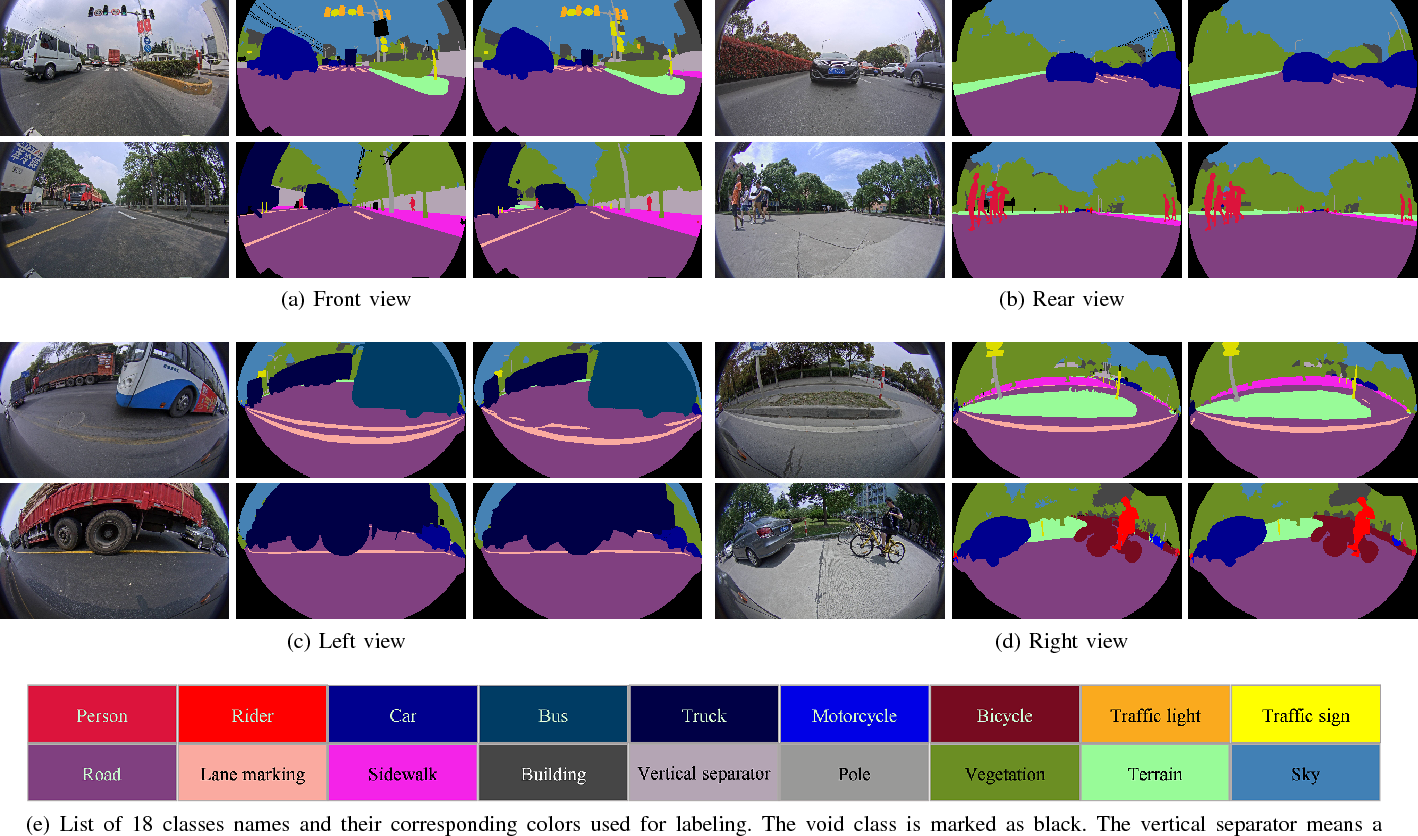 Understanding the surrounding environment of the vehicle is still one of the challenges for autonomous driving. This paper addresses 360-degree road scene semantic segmentation using surround view cameras, which are widely equipped in existing production cars. First, in order to address large distortion problem in the fisheye images, Restricted Deformable Convolution (RDC) is proposed for semantic segmentation, which can effectively model geometric transformations by learning the shapes of convolutional filters conditioned on the input feature map. Second, in order to obtain a large-scale training set of surround view images, a novel method called zoom augmentation is proposed to transform conventional images to fisheye images. Finally, an RDC based semantic segmentation model is built. The model is trained for real-world surround view images through a multi-task learning architecture by combining real-world images with transformed images. Experiments demonstrate the effectiveness of the RDC to handle images with large distortions, and the proposed approach shows a good performance using surround view cameras with the help of the transformed images. 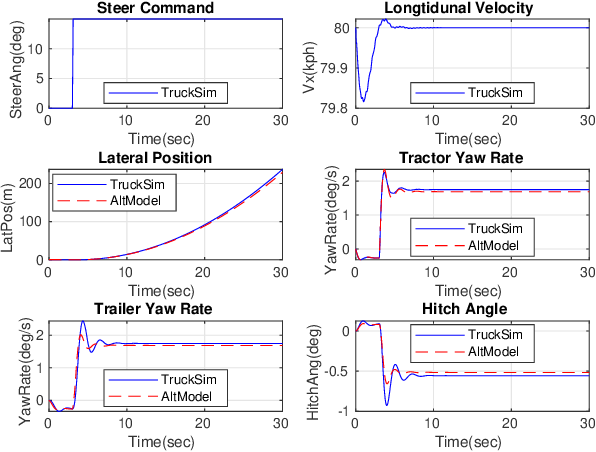 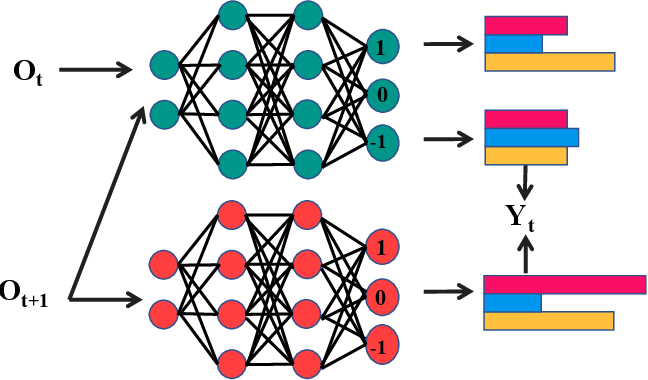 Recently, there have been many advances in autonomous driving society, attracting a lot of attention from academia and industry. However, existing works mainly focus on cars, extra development is still required for self-driving truck algorithms and models. In this paper, we introduce an intelligent self-driving truck system. Our presented system consists of three main components, 1) a realistic traffic simulation module for generating realistic traffic flow in testing scenarios, 2) a high-fidelity truck model which is designed and evaluated for mimicking real truck response in real-world deployment, 3) an intelligent planning module with learning-based decision making algorithm and multi-mode trajectory planner, taking into account the truck's constraints, road slope changes, and the surrounding traffic flow. We provide quantitative evaluations for each component individually to demonstrate the fidelity and performance of each part. We also deploy our proposed system on a real truck and conduct real world experiments which shows our system's capacity of mitigating sim-to-real gap. Our code is available at https://github.com/InceptioResearch/IITS