Three-dimensional objects are commonly represented as 3D boxes in a point-cloud. This representation mimics the well-studied image-based 2D bounding-box detection but comes with additional challenges. Objects in a 3D world do not follow any particular orientation, and box-based detectors have difficulties enumerating all orientations or fitting an axis-aligned bounding box to rotated objects. In this paper, we instead propose to represent, detect, and track 3D objects as points. We use a keypoint detector to find centers of objects and simply regress to other attributes, including 3D size, 3D orientation, and velocity. In our center-based framework, 3D object tracking simplifies to greedy closest-point matching. The resulting detection and tracking algorithm is simple, efficient, and effective. On the nuScenes dataset, our point-based representations perform $3$-$4$ mAP higher than the box-based counterparts for 3D detection, and 6 AMOTA higher for 3D tracking. Our real-time model runs end-to-end 3D detection and tracking at $30$ FPS with $54.2$ AMOTA and $48.3$ mAP while the best single model achieves $60.3$ mAP for 3D detection and $63.8$ AMOTA for 3D tracking. The code and pretrained models are available at https://github.com/tianweiy/CenterPoint. 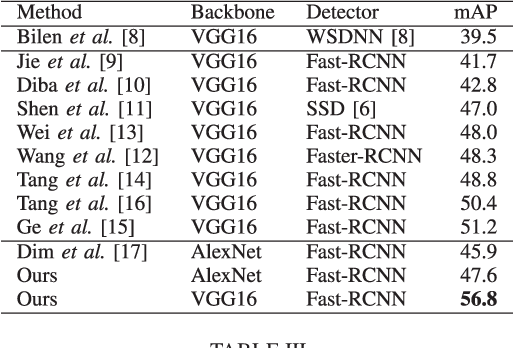 Weakly-supervised object detection has recently attracted increasing attention since it only requires image-levelannotations. However, the performance obtained by existingmethods is still far from being satisfactory compared with fully-supervised object detection methods. To achieve a good trade-off between annotation cost and object detection performance,we propose a simple yet effective method which incorporatesCNN visualization with click supervision to generate the pseudoground-truths (i.e., bounding boxes). These pseudo ground-truthscan be used to train a fully-supervised detector. To estimatethe object scale, we firstly adopt a proposal selection algorithmto preserve high-quality proposals, and then generate ClassActivation Maps (CAMs) for these preserved proposals by theproposed CNN visualization algorithm called Spatial AttentionCAM. Finally, we fuse these CAMs together to generate pseudoground-truths and train a fully-supervised object detector withthese ground-truths. Experimental results on the PASCAL VOC2007 and VOC 2012 datasets show that the proposed methodcan obtain much higher accuracy for estimating the object scale,compared with the state-of-the-art image-level based methodsand the center-click based method

A crucial task in scene understanding is 3D object detection, which aims to detect and localize the 3D bounding boxes of objects belonging to specific classes. Existing 3D object detectors heavily rely on annotated 3D bounding boxes during training, while these annotations could be expensive to obtain and only accessible in limited scenarios. Weakly supervised learning is a promising approach to reducing the annotation requirement, but existing weakly supervised object detectors are mostly for 2D detection rather than 3D. In this work, we propose VS3D, a framework for weakly supervised 3D object detection from point clouds without using any ground truth 3D bounding box for training. First, we introduce an unsupervised 3D proposal module that generates object proposals by leveraging normalized point cloud densities. Second, we present a cross-modal knowledge distillation strategy, where a convolutional neural network learns to predict the final results from the 3D object proposals by querying a teacher network pretrained on image datasets. Comprehensive experiments on the challenging KITTI dataset demonstrate the superior performance of our VS3D in diverse evaluation settings. The source code and pretrained models are publicly available at https://github.com/Zengyi-Qin/Weakly-Supervised-3D-Object-Detection. 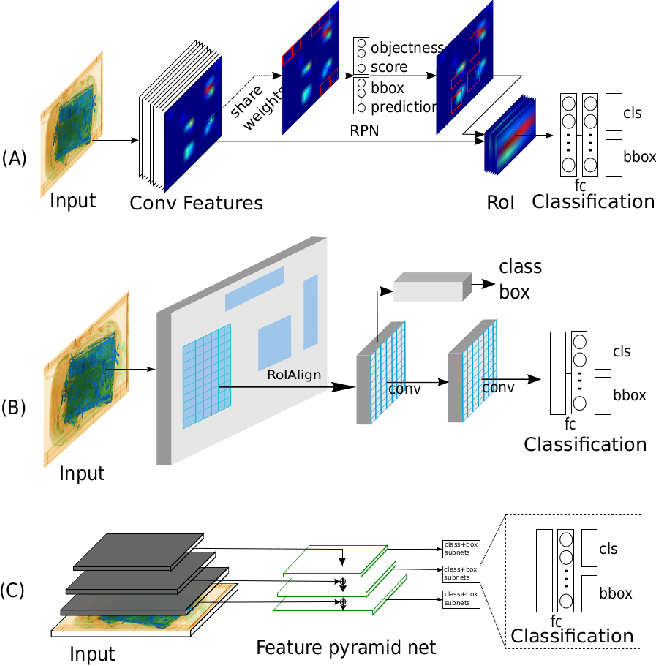 X-ray baggage security screening is widely used to maintain aviation and transport security. Of particular interest is the focus on automated security X-ray analysis for particular classes of object such as electronics, electrical items, and liquids. However, manual inspection of such items is challenging when dealing with potentially anomalous items. Here we present a dual convolutional neural network (CNN) architecture for automatic anomaly detection within complex security X-ray imagery. We leverage recent advances in region-based (R-CNN), mask-based CNN (Mask R-CNN) and detection architectures such as RetinaNet to provide object localisation variants for specific object classes of interest. Subsequently, leveraging a range of established CNN object and fine-grained category classification approaches we formulate within object anomaly detection as a two-class problem (anomalous or benign). While the best performing object localisation method is able to perform with 97.9% mean average precision (mAP) over a six-class X-ray object detection problem, subsequent two-class anomaly/benign classification is able to achieve 66% performance for within object anomaly detection. Overall, this performance illustrates both the challenge and promise of object-wise anomaly detection within the context of cluttered X-ray security imagery. 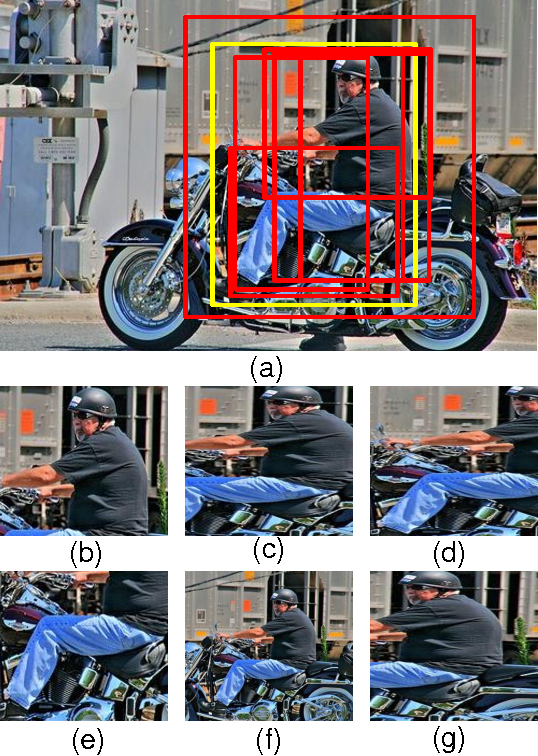 In existing works that learn representation for object detection, the relationship between a candidate window and the ground truth bounding box of an object is simplified by thresholding their overlap. This paper shows information loss in this simplification and picks up the relative location/size information discarded by thresholding. We propose a representation learning pipeline to use the relationship as supervision for improving the learned representation in object detection. Such relationship is not limited to object of the target category, but also includes surrounding objects of other categories. We show that image regions with multiple contexts and multiple rotations are effective in capturing such relationship during the representation learning process and in handling the semantic and visual variation caused by different window-object configurations. Experimental results show that the representation learned by our approach can improve the object detection accuracy by 6.4% in mean average precision (mAP) on ILSVRC2014. On the challenging ILSVRC2014 test dataset, 48.6% mAP is achieved by our single model and it is the best among published results. On PASCAL VOC, it outperforms the state-of-the-art result of Fast RCNN by 3.3% in absolute mAP. 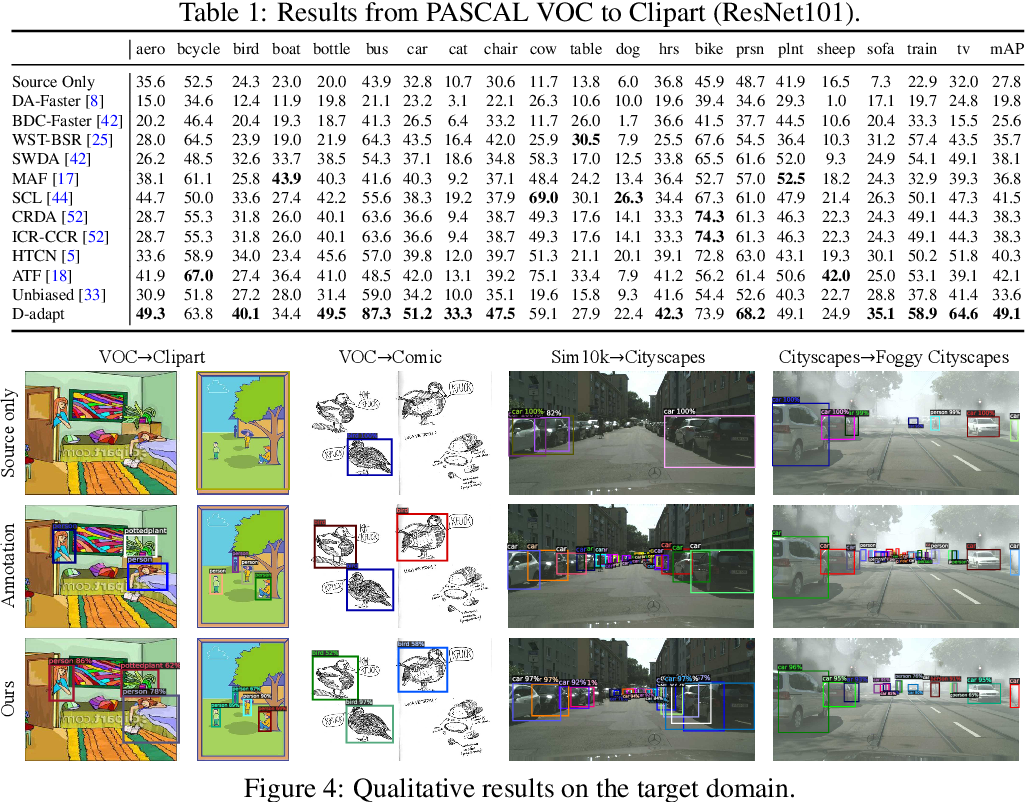 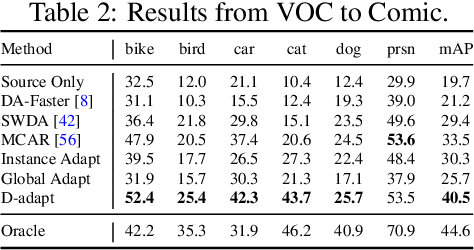 Cross-domain object detection is more challenging than object classification since multiple objects exist in an image and the location of each object is unknown in the unlabeled target domain. As a result, when we adapt features of different objects to enhance the transferability of the detector, the features of the foreground and the background are easy to be confused, which may hurt the discriminability of the detector. Besides, previous methods focused on category adaptation but ignored another important part for object detection, i.e., the adaptation on bounding box regression. To this end, we propose D-adapt, namely Decoupled Adaptation, to decouple the adversarial adaptation and the training of the detector. Besides, we fill the blank of regression domain adaptation in object detection by introducing a bounding box adaptor. Experiments show that D-adapt achieves state-of-the-art results on four cross-domain object detection tasks and yields 17% and 21% relative improvement on benchmark datasets Clipart1k and Comic2k in particular.

IIIT-AR-13K: A New Dataset for Graphical Object Detection in Documents 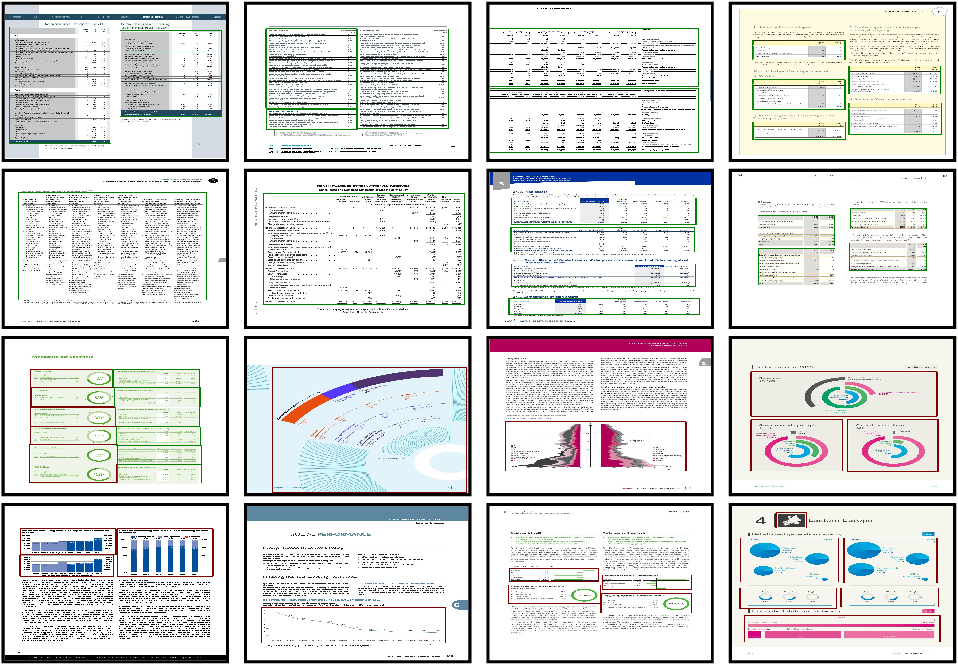 We introduce a new dataset for graphical object detection in business documents, more specifically annual reports. This dataset, IIIT-AR-13k, is created by manually annotating the bounding boxes of graphical or page objects in publicly available annual reports. This dataset contains a total of 13k annotated page images with objects in five different popular categories - table, figure, natural image, logo, and signature. It is the largest manually annotated dataset for graphical object detection. Annual reports created in multiple languages for several years from various companies bring high diversity into this dataset. We benchmark IIIT-AR-13K dataset with two state of the art graphical object detection techniques using Faster R-CNN [20] and Mask R-CNN [11] and establish high baselines for further research. Our dataset is highly effective as training data for developing practical solutions for graphical object detection in both business documents and technical articles. By training with IIIT-AR-13K, we demonstrate the feasibility of a single solution that can report superior performance compared to the equivalent ones trained with a much larger amount of data, for table detection. We hope that our dataset helps in advancing the research for detecting various types of graphical objects in business documents. 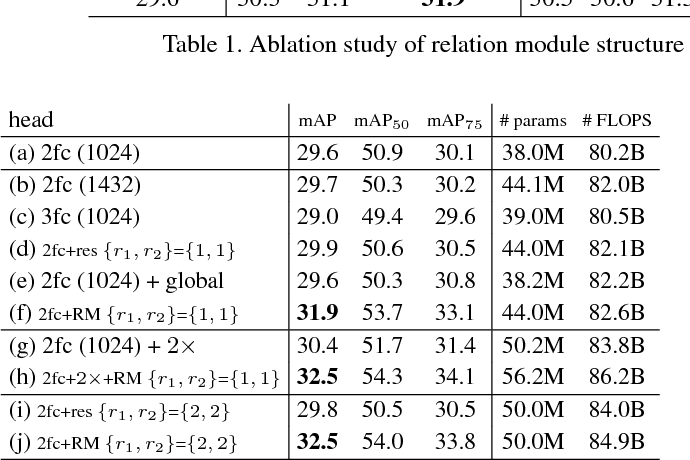 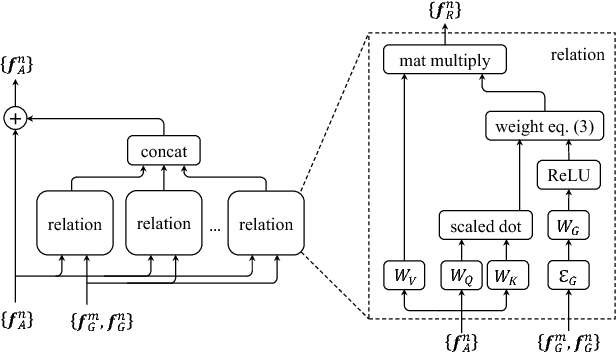 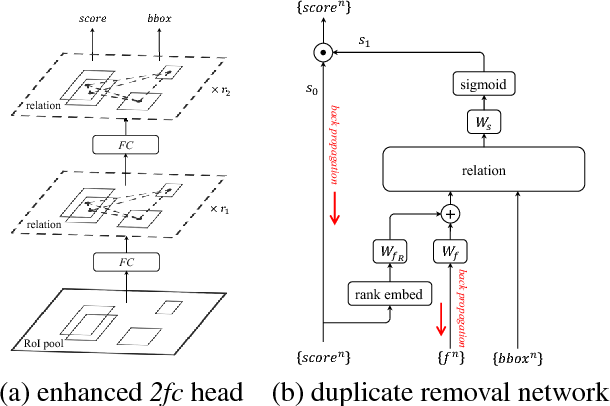 Although it is well believed for years that modeling relations between objects would help object recognition, there has not been evidence that the idea is working in the deep learning era. All state-of-the-art object detection systems still rely on recognizing object instances individually, without exploiting their relations during learning. This work proposes an object relation module. It processes a set of objects simultaneously through interaction between their appearance feature and geometry, thus allowing modeling of their relations. It is lightweight and in-place. It does not require additional supervision and is easy to embed in existing networks. It is shown effective on improving object recognition and duplicate removal steps in the modern object detection pipeline. It verifies the efficacy of modeling object relations in CNN based detection. It gives rise to the first fully end-to-end object detector. 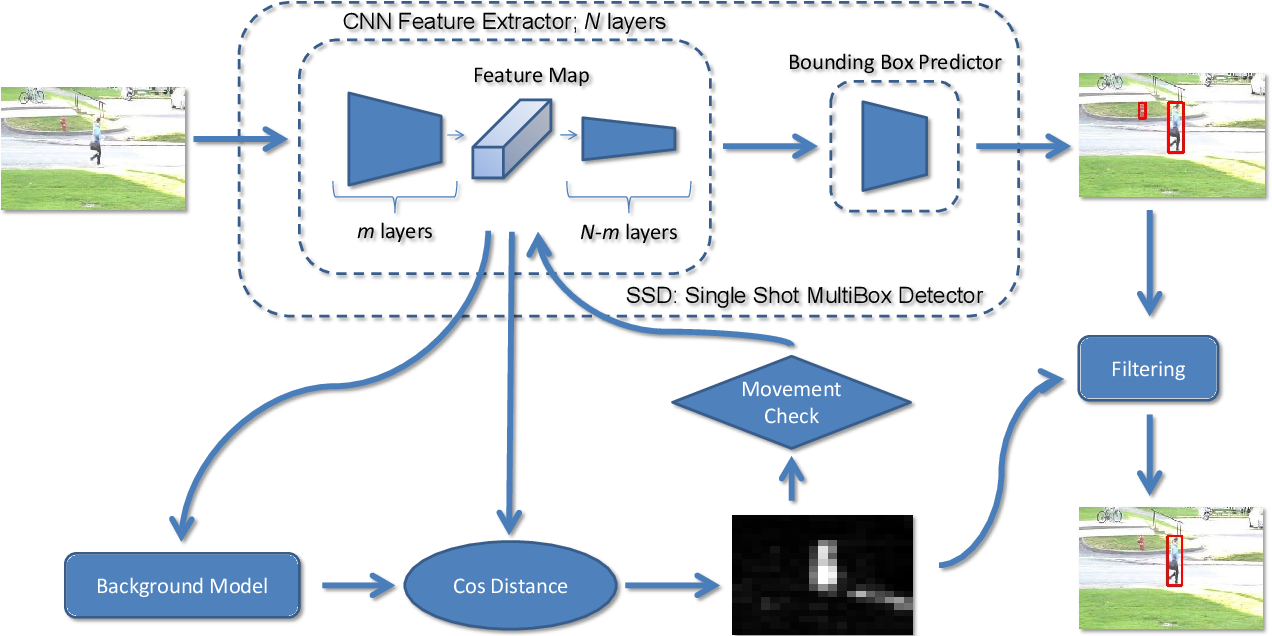 Convolutional neural networks (CNN) allow achieving the highest accuracy for the task of object detection in images. Major challenges in further development of object detectors are false-positive detections and high demand of processing power. In this paper, we propose an approach to object detection, which makes it possible to reduce the number of false-positive detections by processing only moving objects and reduce required processing power for algorithm inference. The proposed approach is modification of the CNN already trained for object detection task. This method can be used to improve the accuracy of an existing system by applying minor changes to the existing algorithm. The efficiency of the proposed approach was demonstrated on the open dataset "CDNet2014 pedestrian". The implementation of the method proposed in the article is available on the GitHub: https://github.com/david-svitov/AmphibianDetector

Detection of unwanted (`foreign') objects within products is a common procedure in many branches of industry for maintaining production quality. X-ray imaging is a fast, non-invasive and widely applicable method for foreign object detection. Deep learning has recently emerged as a powerful approach for recognizing patterns in radiographs (i.e., X-ray images), enabling automated X-ray based foreign object detection. However, these methods require a large number of training examples and manual annotation of these examples is a subjective and laborious task. In this work, we propose a Computed Tomography (CT) based method for producing training data for supervised learning of foreign object detection, with minimal labour requirements. In our approach, a few representative objects are CT scanned and reconstructed in 3D. The radiographs that have been acquired as part of the CT-scan data serve as input for the machine learning method. High-quality ground truth locations of the foreign objects are obtained through accurate 3D reconstructions and segmentations. Using these segmented volumes, corresponding 2D segmentations are obtained by creating virtual projections. We outline the benefits of objectively and reproducibly generating training data in this way compared to conventional radiograph annotation. In addition, we show how the accuracy depends on the number of objects used for the CT reconstructions. The results show that in this workflow generally only a relatively small number of representative objects (i.e., fewer than 10) are needed to achieve adequate detection performance in an industrial setting. Moreover, for real experimental data we show that the workflow leads to higher foreign object detection accuracies than with standard radiograph annotation.


* This paper is under consideration at Expert Systems with Applications. 22 pages, 15 figures