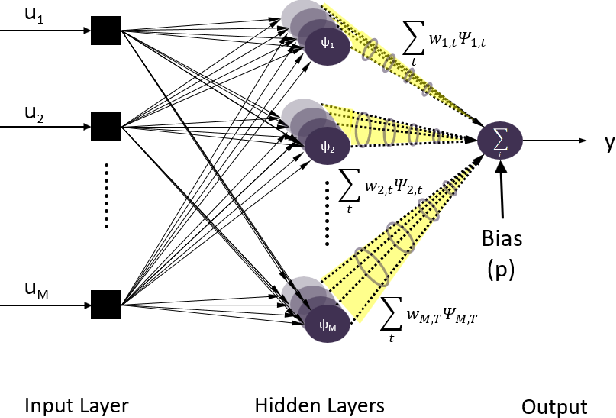 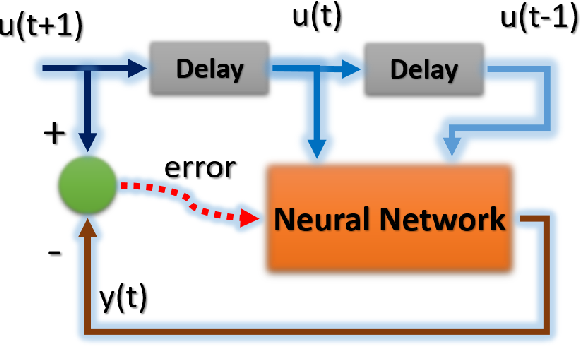 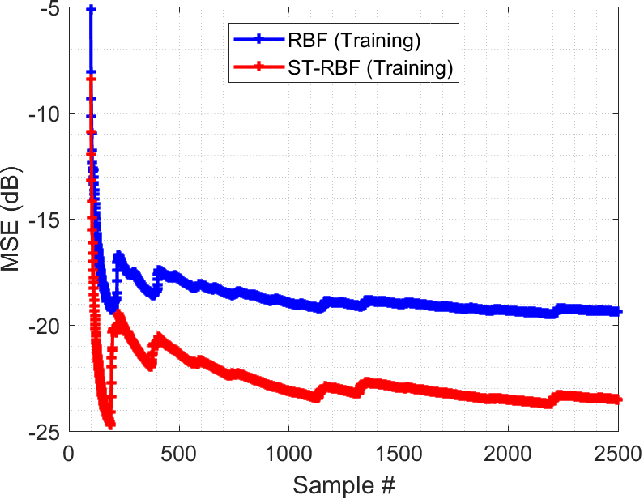 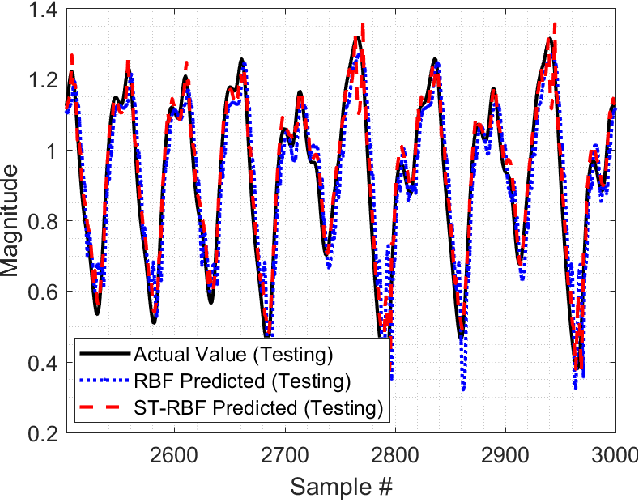 Due to the dynamic nature, chaotic time series are difficult predict. In conventional signal processing approaches signals are treated either in time or in space domain only. Spatio-temporal analysis of signal provides more advantages over conventional uni-dimensional approaches by harnessing the information from both the temporal and spatial domains. Herein, we propose an spatio-temporal extension of RBF neural networks for the prediction of chaotic time series. The proposed algorithm utilizes the concept of time-space orthogonality and separately deals with the temporal dynamics and spatial non-linearity(complexity) of the chaotic series. The proposed RBF architecture is explored for the prediction of Mackey-Glass time series and results are compared with the standard RBF. The spatio-temporal RBF is shown to out perform the standard RBFNN by achieving significantly reduced estimation error. 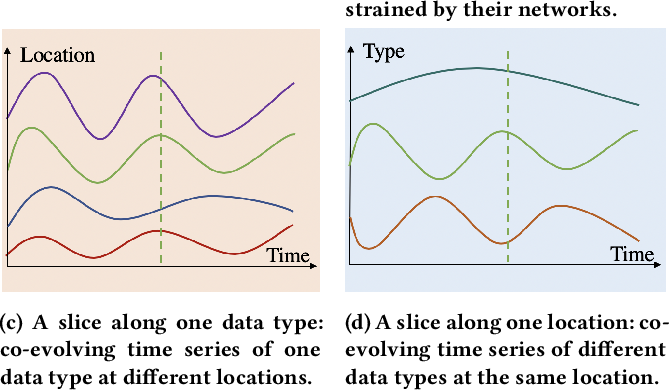 Co-evolving time series appears in a multitude of applications such as environmental monitoring, financial analysis, and smart transportation. This paper aims to address the following challenges, including (C1) how to incorporate explicit relationship networks of the time series; (C2) how to model the implicit relationship of the temporal dynamics. We propose a novel model called Network of Tensor Time Series, which is comprised of two modules, including Tensor Graph Convolutional Network (TGCN) and Tensor Recurrent Neural Network (TRNN). TGCN tackles the first challenge by generalizing Graph Convolutional Network (GCN) for flat graphs to tensor graphs, which captures the synergy between multiple graphs associated with the tensors. TRNN leverages tensor decomposition to model the implicit relationships among co-evolving time series. The experimental results on five real-world datasets demonstrate the efficacy of the proposed method. 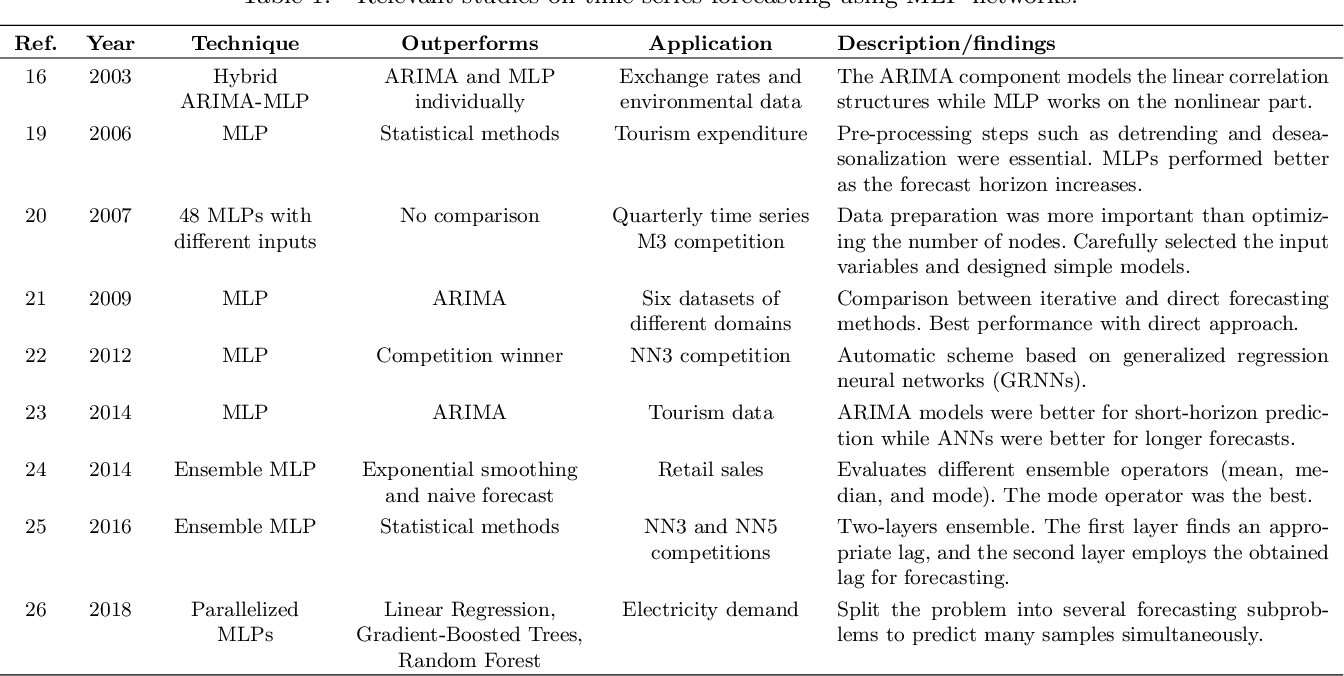 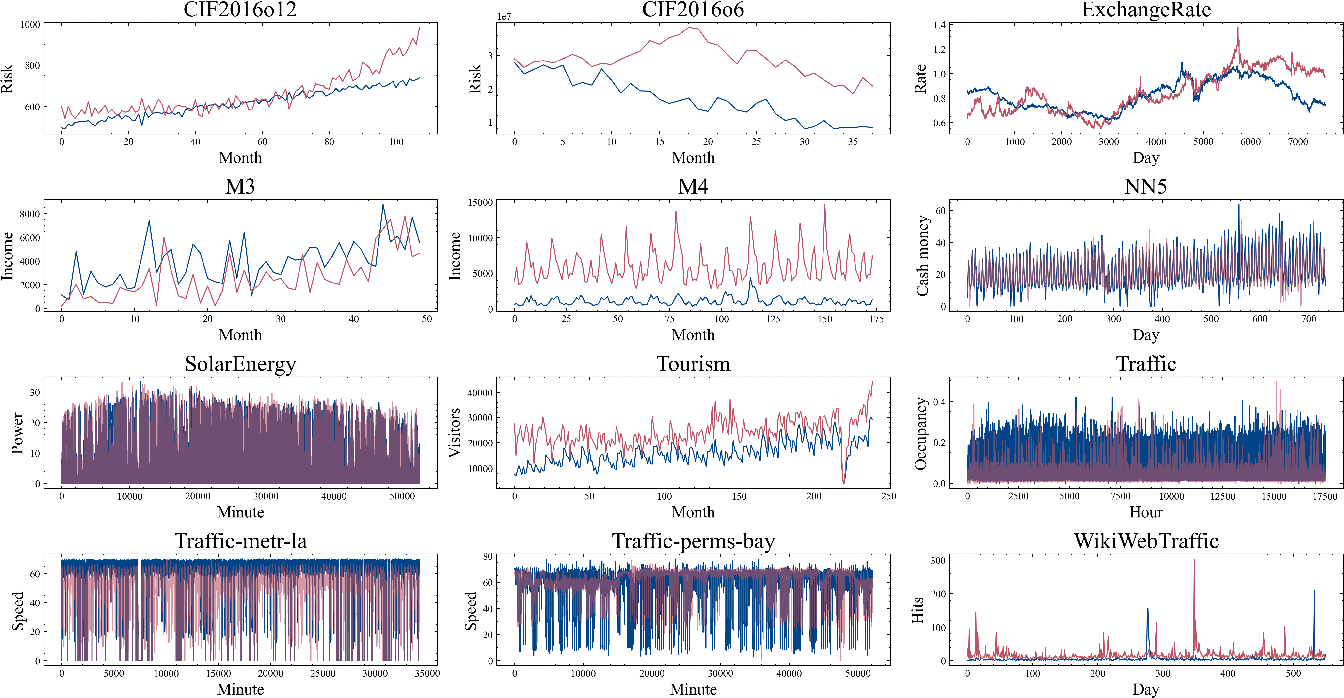 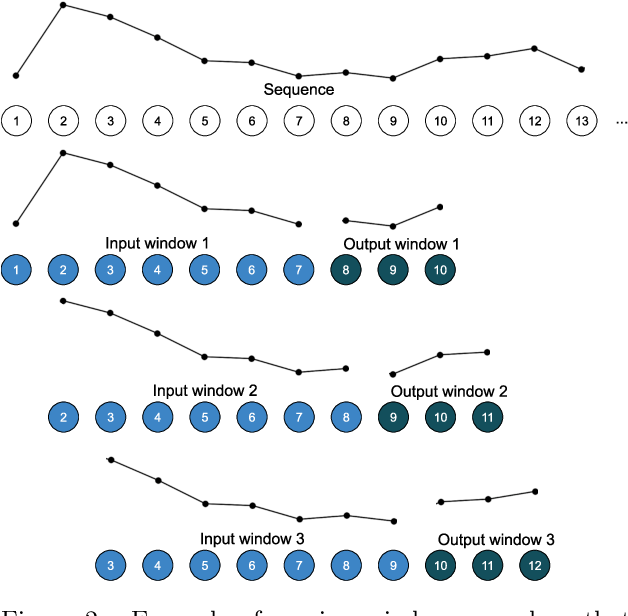 In recent years, deep learning techniques have outperformed traditional models in many machine learning tasks. Deep neural networks have successfully been applied to address time series forecasting problems, which is a very important topic in data mining. They have proved to be an effective solution given their capacity to automatically learn the temporal dependencies present in time series. However, selecting the most convenient type of deep neural network and its parametrization is a complex task that requires considerable expertise. Therefore, there is a need for deeper studies on the suitability of all existing architectures for different forecasting tasks. In this work, we face two main challenges: a comprehensive review of the latest works using deep learning for time series forecasting; and an experimental study comparing the performance of the most popular architectures. The comparison involves a thorough analysis of seven types of deep learning models in terms of accuracy and efficiency. We evaluate the rankings and distribution of results obtained with the proposed models under many different architecture configurations and training hyperparameters. The datasets used comprise more than 50000 time series divided into 12 different forecasting problems. By training more than 38000 models on these data, we provide the most extensive deep learning study for time series forecasting. Among all studied models, the results show that long short-term memory (LSTM) and convolutional networks (CNN) are the best alternatives, with LSTMs obtaining the most accurate forecasts. CNNs achieve comparable performance with less variability of results under different parameter configurations, while also being more efficient. 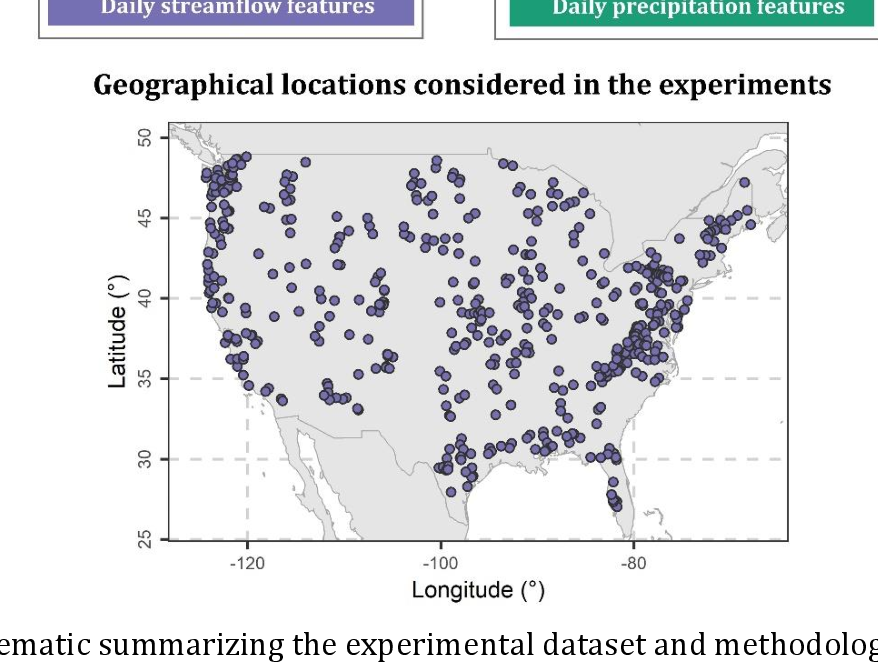 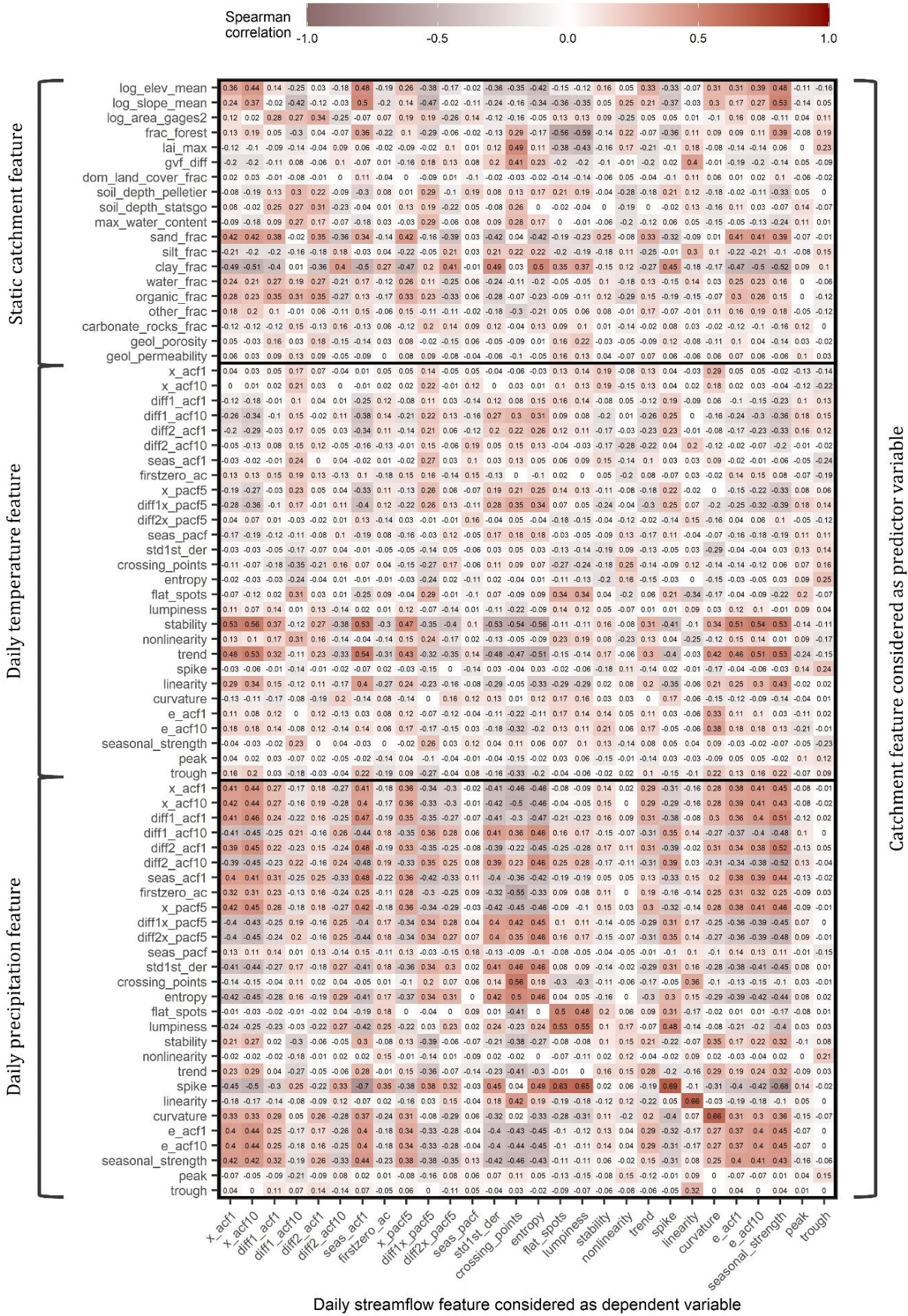 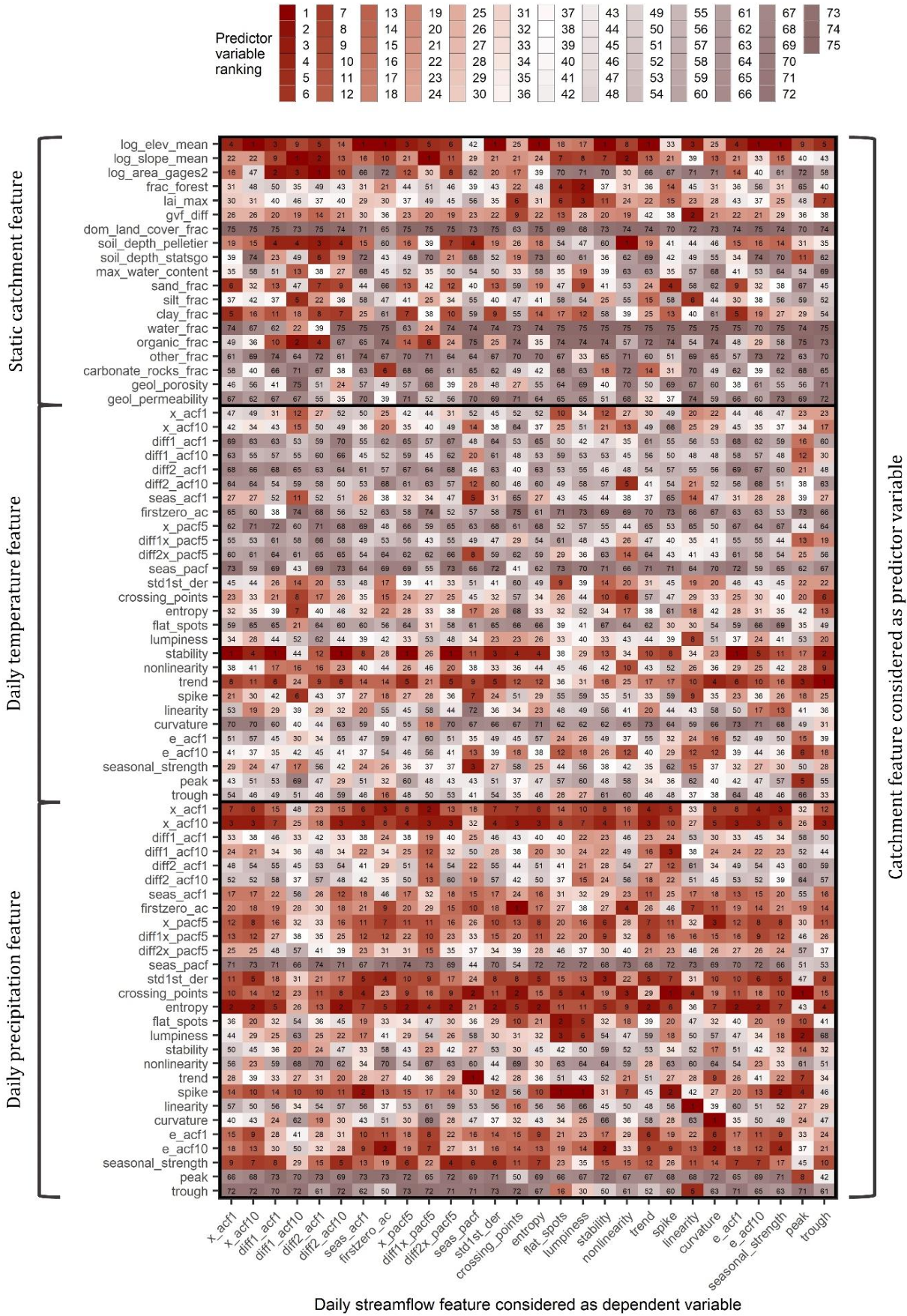 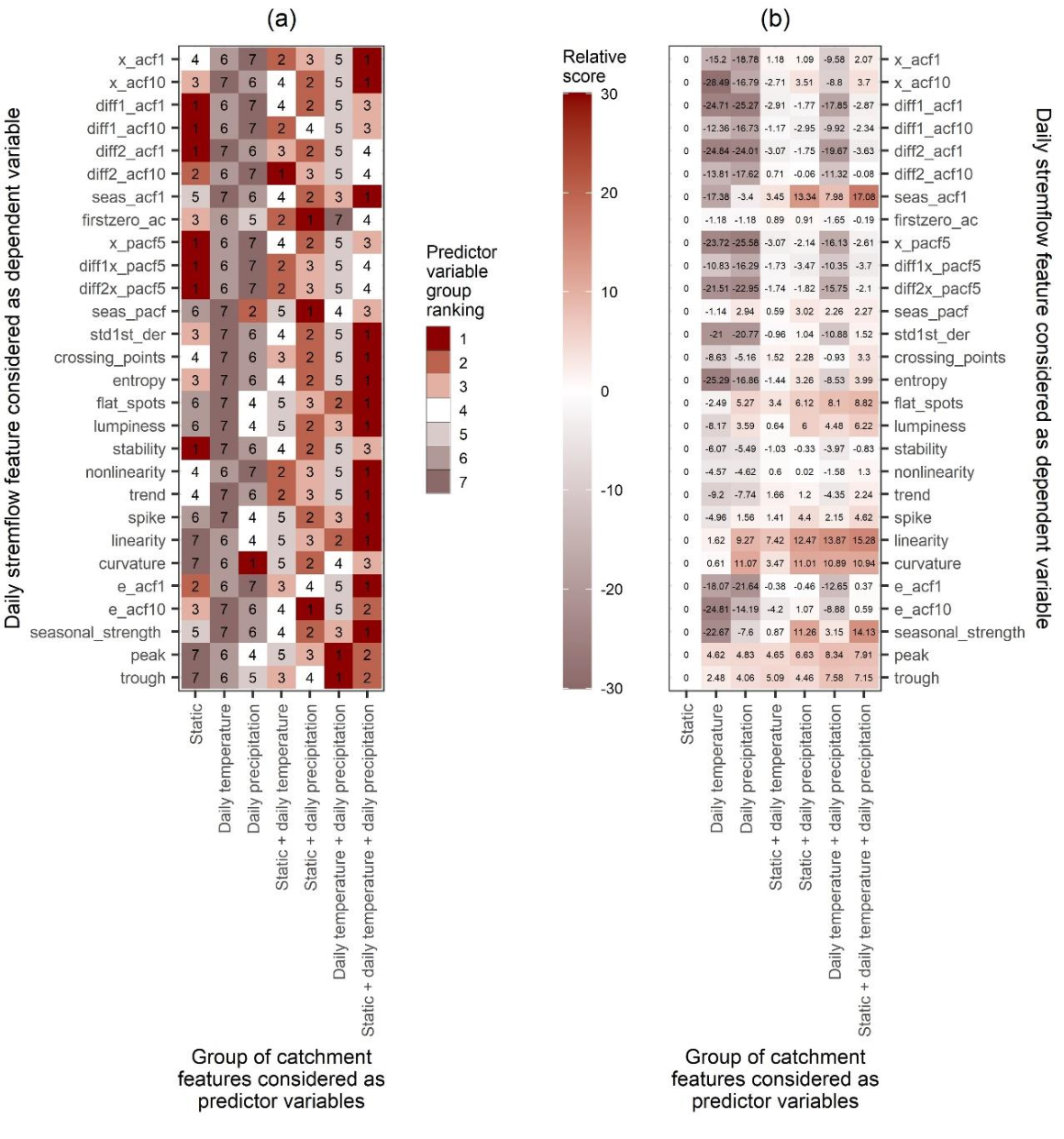 Regression-based frameworks for streamflow regionalization are built around catchment attributes that traditionally originate from catchment hydrology, flood frequency analysis and their interplay. In this work, we deviated from this traditional path by formulating and extensively investigating the first regression-based streamflow regionalization frameworks that largely emerge from general-purpose time series features for data science and, more precisely, from a large variety of such features. We focused on 28 features that included (partial) autocorrelation, entropy, temporal variation, seasonality, trend, lumpiness, stability, nonlinearity, linearity, spikiness, curvature and others. We estimated these features for daily temperature, precipitation and streamflow time series from 511 catchments, and then merged them within regionalization contexts with traditional topographic, land cover, soil and geologic attributes. Precipitation and temperature features (e.g., the spectral entropy, seasonality strength and lag-1 autocorrelation of the precipitation time series, and the stability and trend strength of the temperature time series) were found to be useful predictors of many streamflow features. The same applies to traditional attributes, such as the catchment mean elevation. Relationships between predictor and dependent variables were also revealed, while the spectral entropy, the seasonality strength and several autocorrelation features of the streamflow time series were found to be more regionalizable than others. 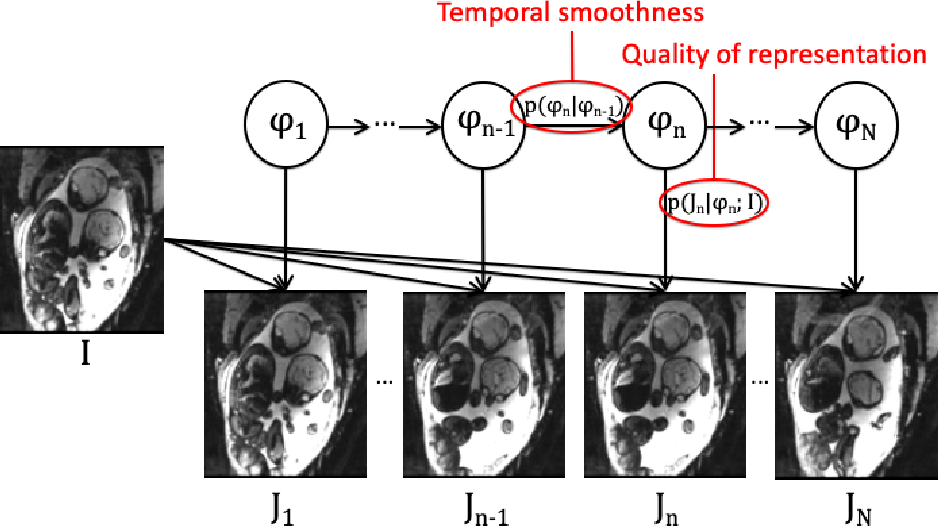 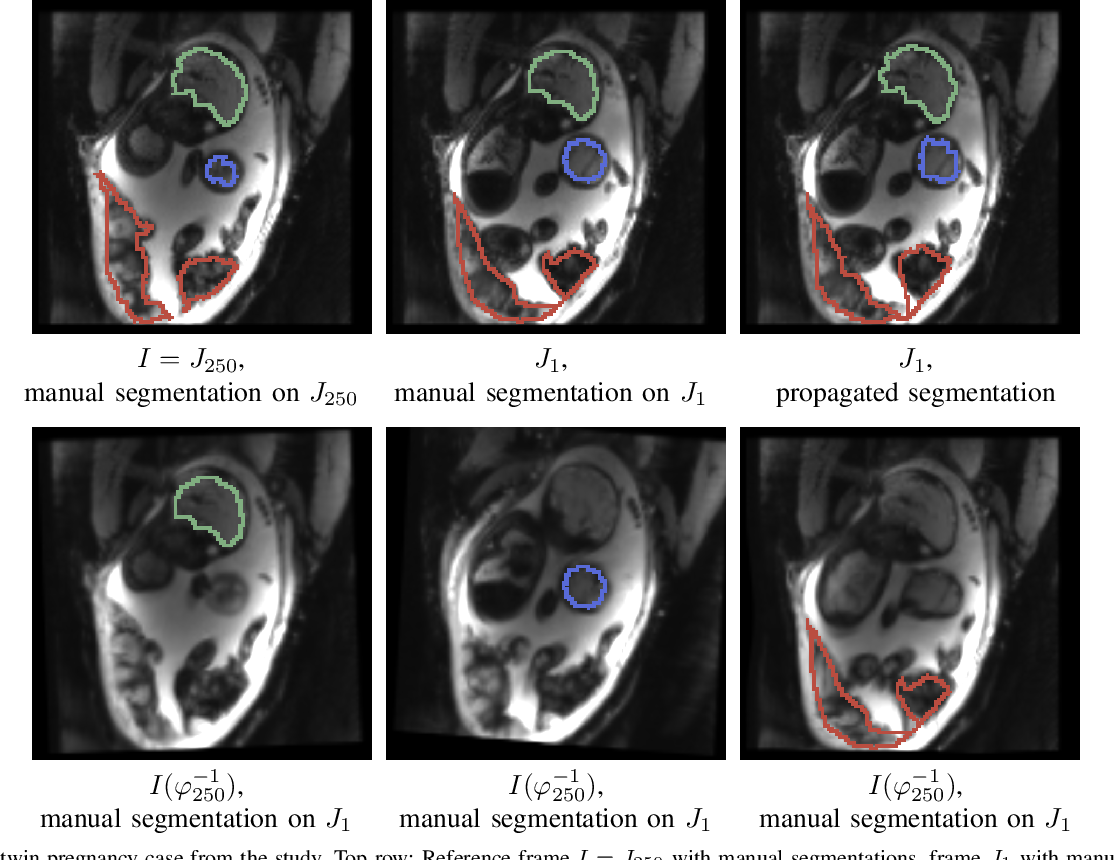 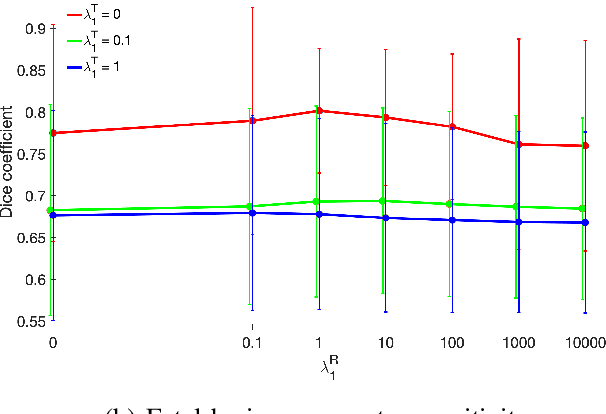 We present a robust method to correct for motion in volumetric in-utero MRI time series. Time-course analysis for in-utero volumetric MRI time series often suffers from substantial and unpredictable fetal motion. Registration provides voxel correspondences between images and is commonly employed for motion correction. Current registration methods often fail when aligning images that are substantially different from a template (reference image). To achieve accurate and robust alignment, we make a Markov assumption on the nature of motion and take advantage of the temporal smoothness in the image data. Forward message passing in the corresponding hidden Markov model (HMM) yields an estimation algorithm that only has to account for relatively small motion between consecutive frames. We evaluate the utility of the temporal model in the context of in-utero MRI time series alignment by examining the accuracy of propagated segmentation label maps. Our results suggest that the proposed model captures accurately the temporal dynamics of transformations in in-utero MRI time series.

A Worrying Analysis of Probabilistic Time-series Models for Sales Forecasting


* NeurIPS 2020 workshop (I Can't Believe It's Not Better, [email protected] 2020). All authors contributed equally to this research 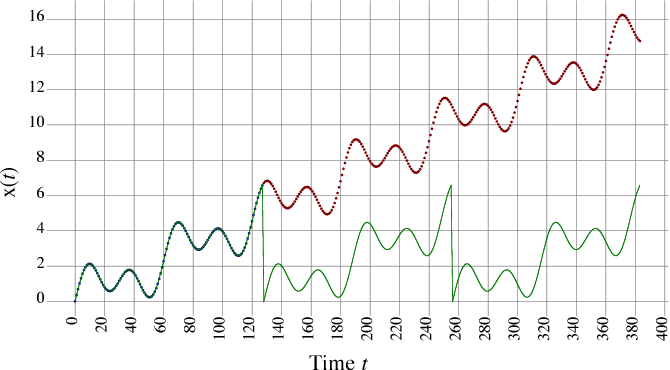 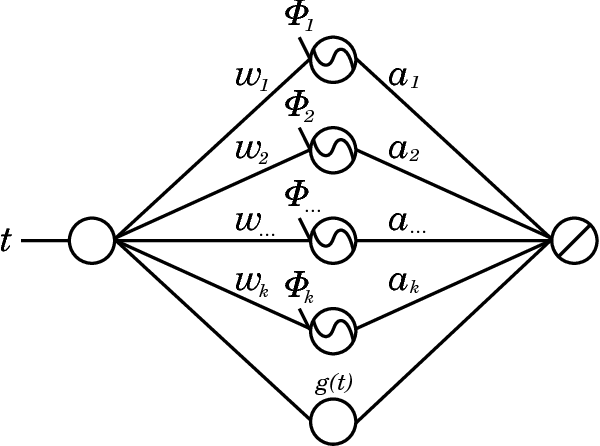 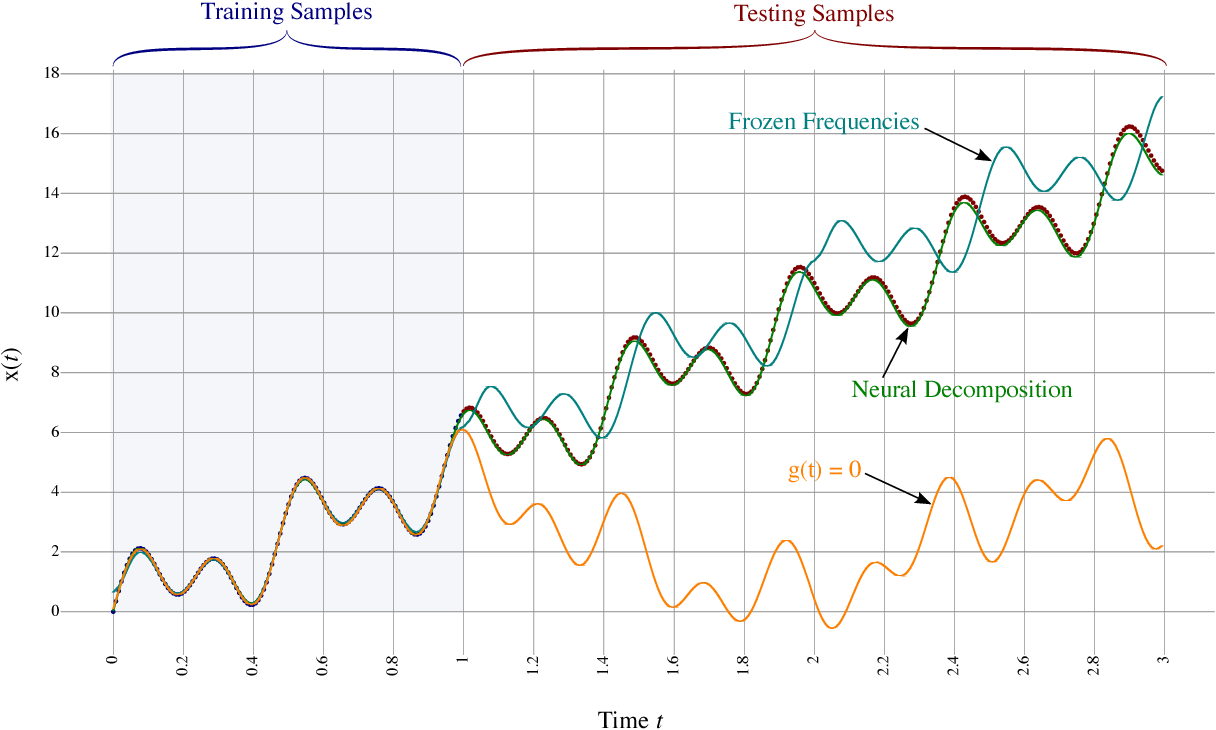 We present a neural network technique for the analysis and extrapolation of time-series data called Neural Decomposition (ND). Units with a sinusoidal activation function are used to perform a Fourier-like decomposition of training samples into a sum of sinusoids, augmented by units with nonperiodic activation functions to capture linear trends and other nonperiodic components. We show how careful weight initialization can be combined with regularization to form a simple model that generalizes well. Our method generalizes effectively on the Mackey-Glass series, a dataset of unemployment rates as reported by the U.S. Department of Labor Statistics, a time-series of monthly international airline passengers, the monthly ozone concentration in downtown Los Angeles, and an unevenly sampled time-series of oxygen isotope measurements from a cave in north India. We find that ND outperforms popular time-series forecasting techniques including LSTM, echo state networks, ARIMA, SARIMA, SVR with a radial basis function, and Gashler and Ashmore's model.

This article proposes and studies warped-linear models for time series classification. The proposed models are time-warp invariant analogues of linear models. Their construction is in line with time series averaging and extensions of k-means and learning vector quantization to dynamic time warping (DTW) spaces. The main theoretical result is that warped-linear models correspond to polyhedral classifiers in Euclidean spaces. This result simplifies the analysis of time-warp invariant models by reducing to max-linear functions. We exploit this relationship and derive solutions to the label-dependency problem and the problem of learning warped-linear models. Empirical results on time series classification suggest that warped-linear functions better trade solution quality against computation time than nearest-neighbor and prototype-based methods.