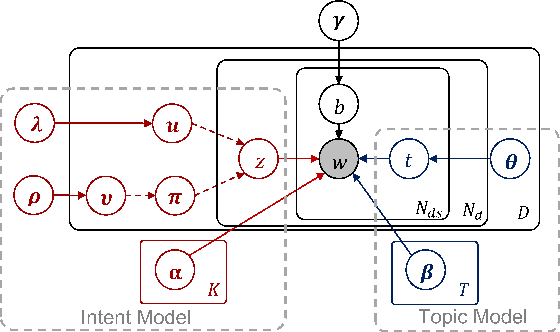 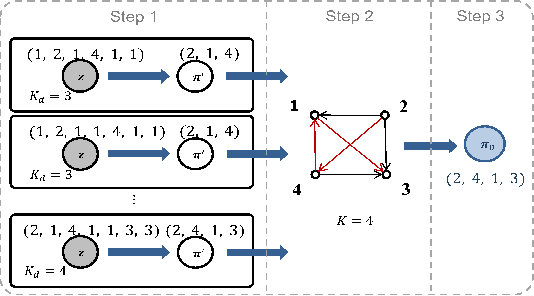 Modeling document structure is of great importance for discourse analysis and related applications. The goal of this research is to capture the document intent structure by modeling documents as a mixture of topic words and rhetorical words. While the topics are relatively unchanged through one document, the rhetorical functions of sentences usually change following certain orders in discourse. We propose GMM-LDA, a topic modeling based Bayesian unsupervised model, to analyze the document intent structure cooperated with order information. Our model is flexible that has the ability to combine the annotations and do supervised learning. Additionally, entropic regularization can be introduced to model the significant divergence between topics and intents. We perform experiments in both unsupervised and supervised settings, results show the superiority of our model over several state-of-the-art baselines. 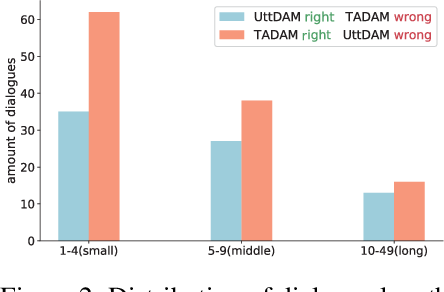 In the retrieval-based multi-turn dialogue modeling, it remains a challenge to select the most appropriate response according to extracting salient features in context utterances. As a conversation goes on, topic shift at discourse-level naturally happens through the continuous multi-turn dialogue context. However, all known retrieval-based systems are satisfied with exploiting local topic words for context utterance representation but fail to capture such essential global topic-aware clues at discourse-level. Instead of taking topic-agnostic n-gram utterance as processing unit for matching purpose in existing systems, this paper presents a novel topic-aware solution for multi-turn dialogue modeling, which segments and extracts topic-aware utterances in an unsupervised way, so that the resulted model is capable of capturing salient topic shift at discourse-level in need and thus effectively track topic flow during multi-turn conversation. Our topic-aware modeling is implemented by a newly proposed unsupervised topic-aware segmentation algorithm and Topic-Aware Dual-attention Matching (TADAM) Network, which matches each topic segment with the response in a dual cross-attention way. Experimental results on three public datasets show TADAM can outperform the state-of-the-art method by a large margin, especially by 3.4% on E-commerce dataset that has an obvious topic shift.

Tired of Topic Models? Clusters of Pretrained Word Embeddings Make for Fast and Good Topics too! 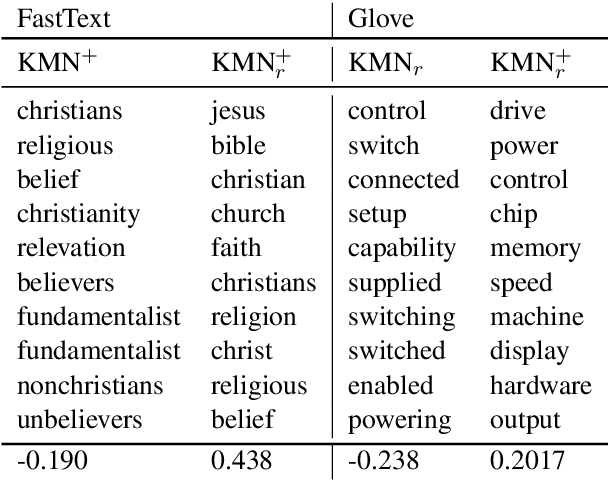 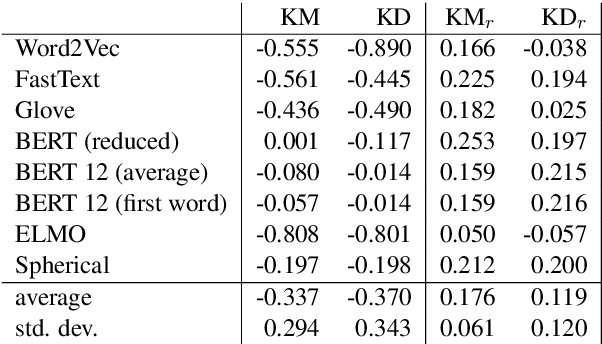 Topic models are a useful analysis tool to uncover the underlying themes within document collections. Probabilistic models which assume a generative story have been the dominant approach for topic modeling. We propose an alternative approach based on clustering readily available pre-trained word embeddings while incorporating document information for weighted clustering and reranking top words. We provide benchmarks for the combination of different word embeddings and clustering algorithms, and analyse their performance under dimensionality reduction with PCA. The best performing combination for our approach is comparable to classical models, and complexity analysis indicate that this is a practical alternative to traditional topic modeling. 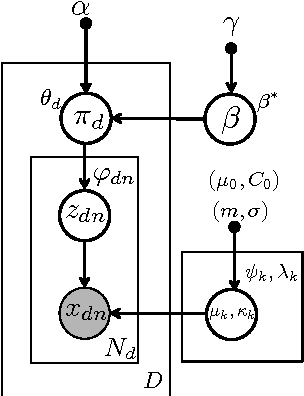 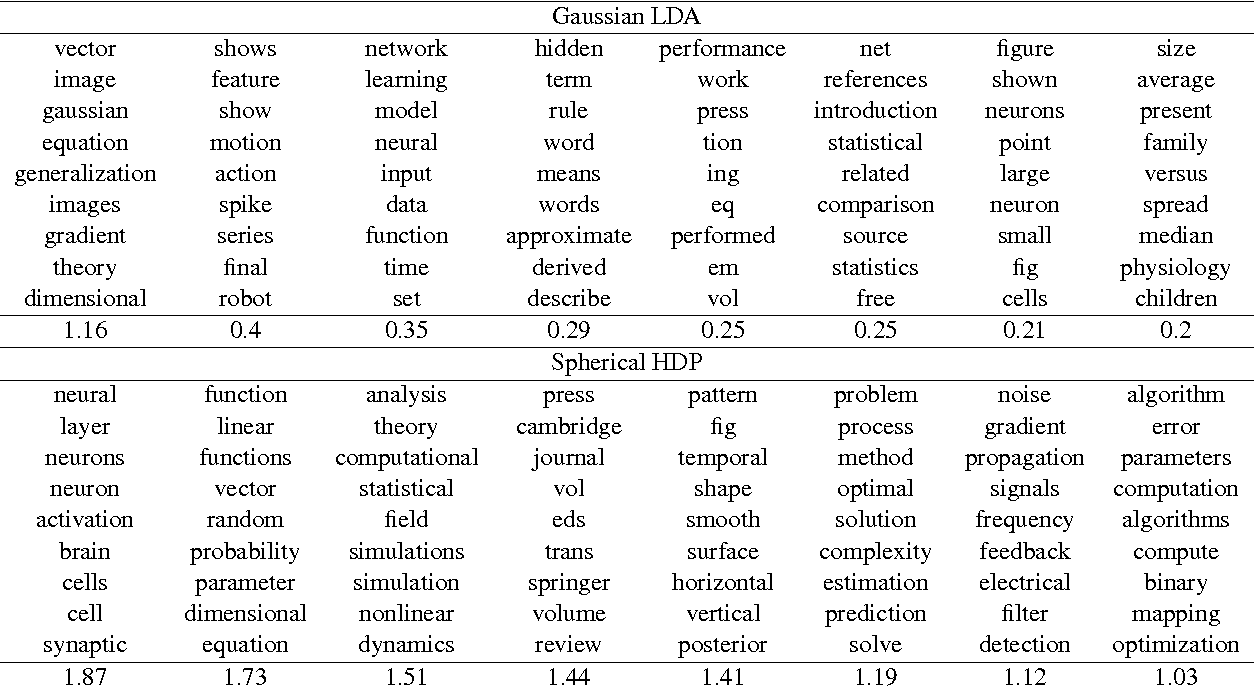 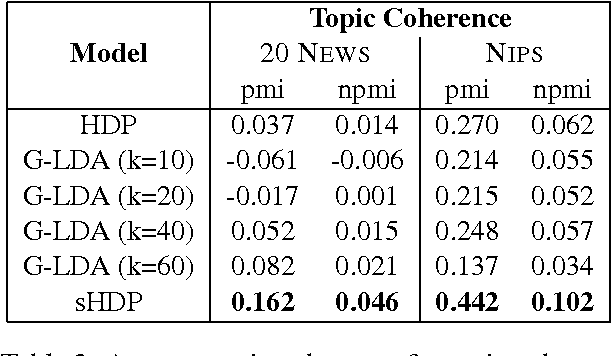 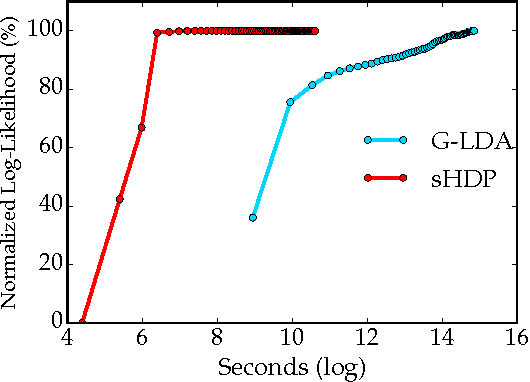 Traditional topic models do not account for semantic regularities in language. Recent distributional representations of words exhibit semantic consistency over directional metrics such as cosine similarity. However, neither categorical nor Gaussian observational distributions used in existing topic models are appropriate to leverage such correlations. In this paper, we propose to use the von Mises-Fisher distribution to model the density of words over a unit sphere. Such a representation is well-suited for directional data. We use a Hierarchical Dirichlet Process for our base topic model and propose an efficient inference algorithm based on Stochastic Variational Inference. This model enables us to naturally exploit the semantic structures of word embeddings while flexibly discovering the number of topics. Experiments demonstrate that our method outperforms competitive approaches in terms of topic coherence on two different text corpora while offering efficient inference. 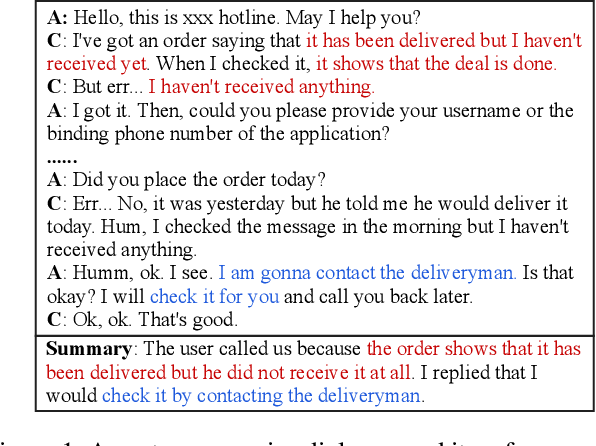 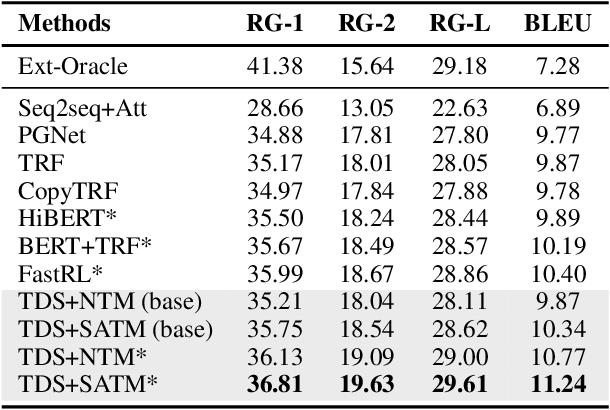 In a customer service system, dialogue summarization can boost service efficiency by automatically creating summaries for long spoken dialogues in which customers and agents try to address issues about specific topics. In this work, we focus on topic-oriented dialogue summarization, which generates highly abstractive summaries that preserve the main ideas from dialogues. In spoken dialogues, abundant dialogue noise and common semantics could obscure the underlying informative content, making the general topic modeling approaches difficult to apply. In addition, for customer service, role-specific information matters and is an indispensable part of a summary. To effectively perform topic modeling on dialogues and capture multi-role information, in this work we propose a novel topic-augmented two-stage dialogue summarizer (TDS) jointly with a saliency-aware neural topic model (SATM) for topic-oriented summarization of customer service dialogues. Comprehensive studies on a real-world Chinese customer service dataset demonstrated the superiority of our method against several strong baselines. 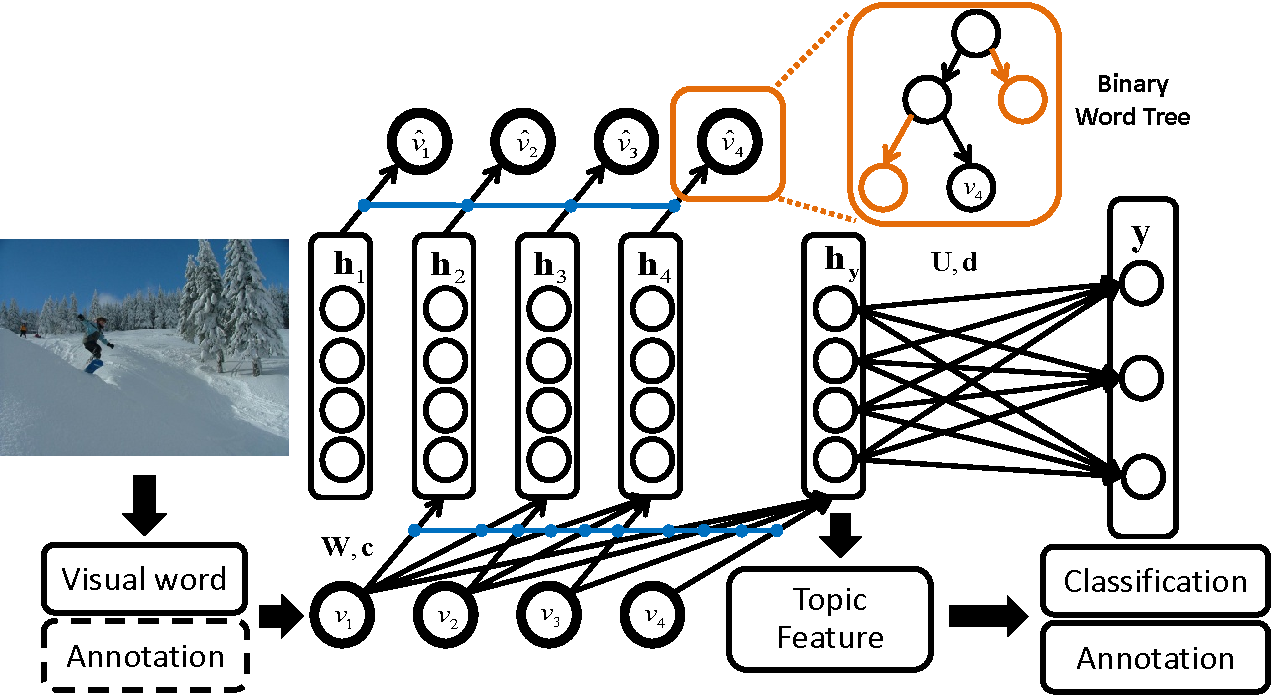 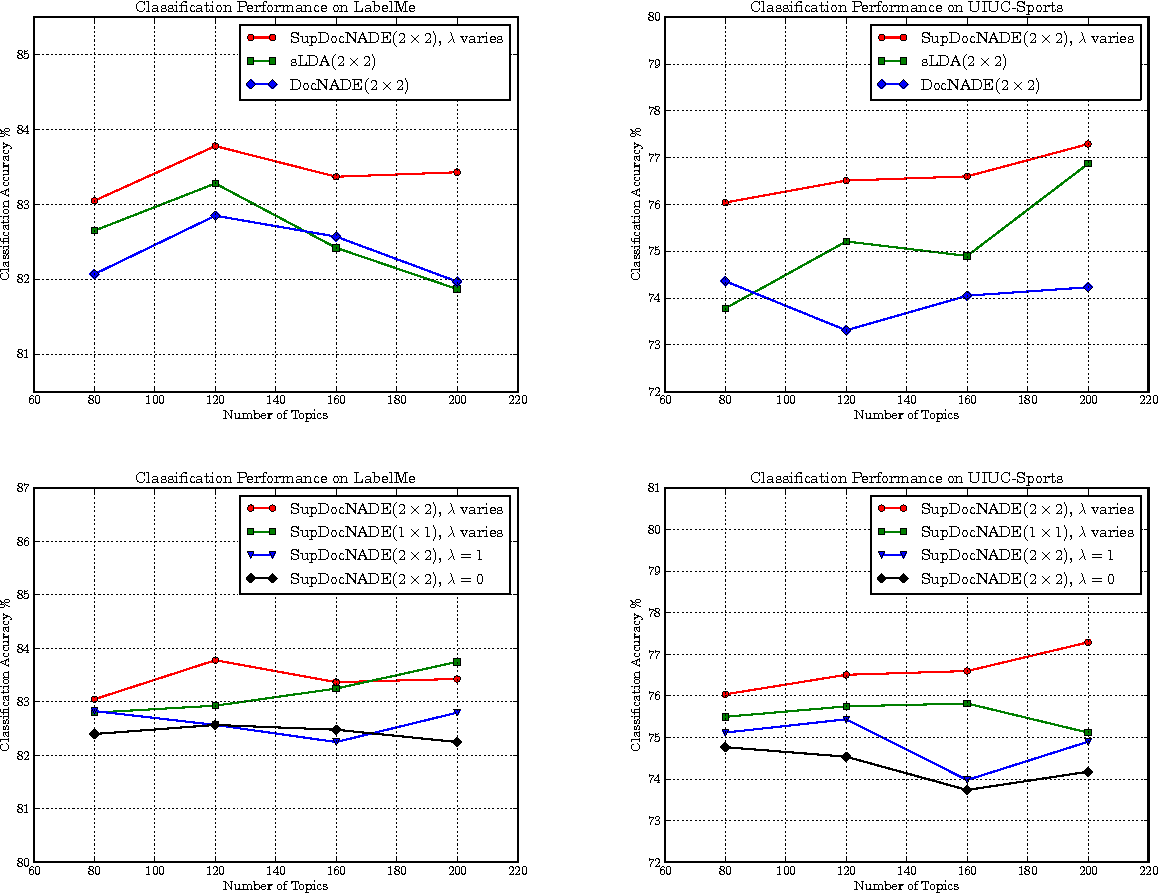 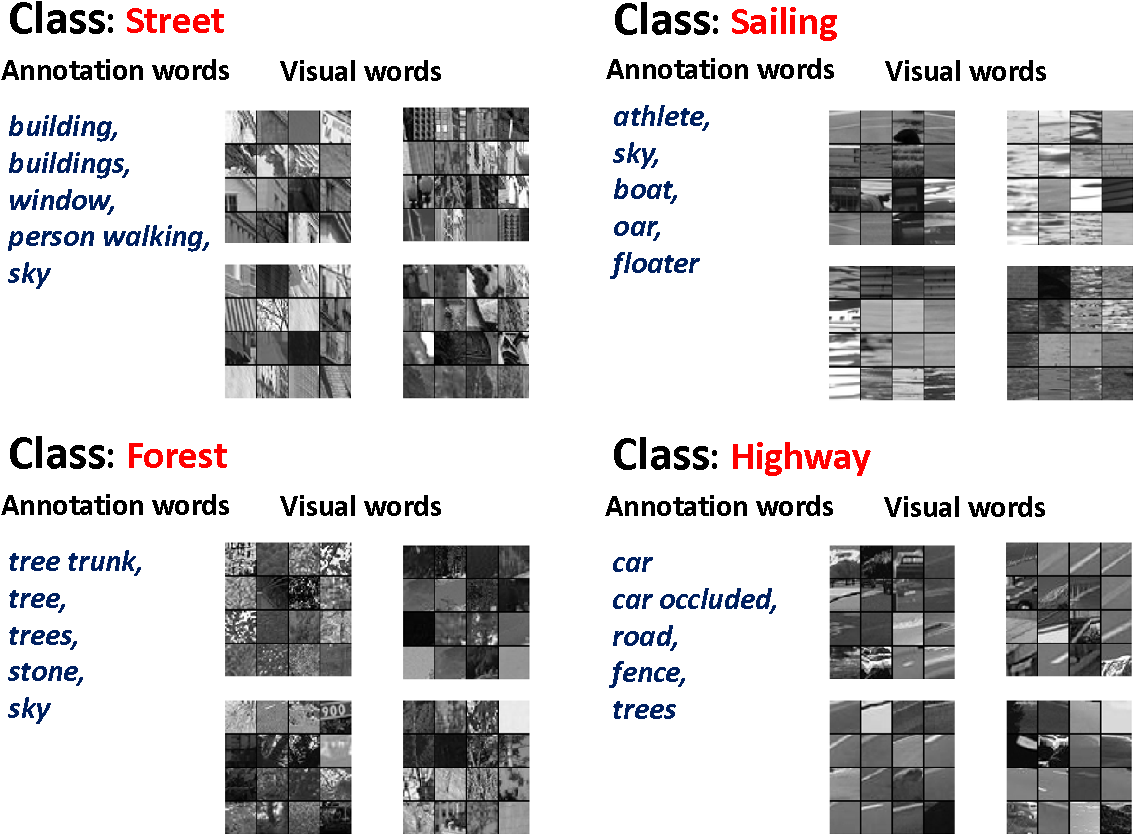 Topic modeling based on latent Dirichlet allocation (LDA) has been a framework of choice to perform scene recognition and annotation. Recently, a new type of topic model called the Document Neural Autoregressive Distribution Estimator (DocNADE) was proposed and demonstrated state-of-the-art performance for document modeling. In this work, we show how to successfully apply and extend this model to the context of visual scene modeling. Specifically, we propose SupDocNADE, a supervised extension of DocNADE, that increases the discriminative power of the hidden topic features by incorporating label information into the training objective of the model. We also describe how to leverage information about the spatial position of the visual words and how to embed additional image annotations, so as to simultaneously perform image classification and annotation. We test our model on the Scene15, LabelMe and UIUC-Sports datasets and show that it compares favorably to other topic models such as the supervised variant of LDA. 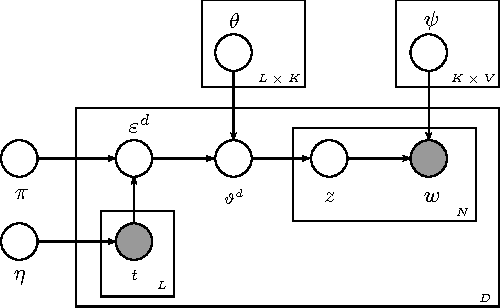 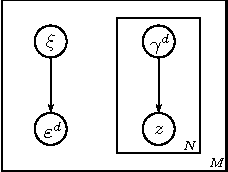 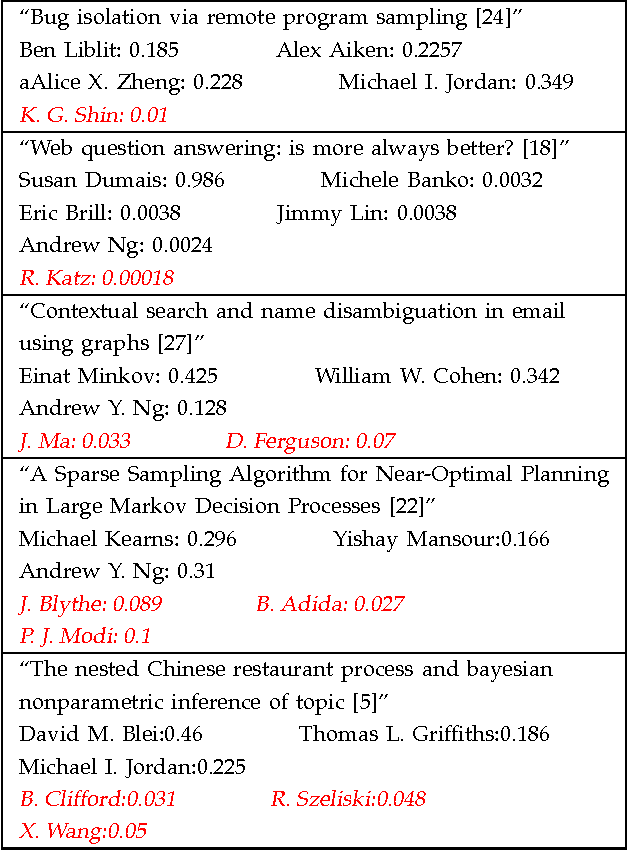 To date, there have been massive Semi-Structured Documents (SSDs) during the evolution of the Internet. These SSDs contain both unstructured features (e.g., plain text) and metadata (e.g., tags). Most previous works focused on modeling the unstructured text, and recently, some other methods have been proposed to model the unstructured text with specific tags. To build a general model for SSDs remains an important problem in terms of both model fitness and efficiency. We propose a novel method to model the SSDs by a so-called Tag-Weighted Topic Model (TWTM). TWTM is a framework that leverages both the tags and words information, not only to learn the document-topic and topic-word distributions, but also to infer the tag-topic distributions for text mining tasks. We present an efficient variational inference method with an EM algorithm for estimating the model parameters. Meanwhile, we propose three large-scale solutions for our model under the MapReduce distributed computing platform for modeling large-scale SSDs. The experimental results show the effectiveness, efficiency and the robustness by comparing our model with the state-of-the-art methods in document modeling, tags prediction and text classification. We also show the performance of the three distributed solutions in terms of time and accuracy on document modeling.

When building large-scale machine learning (ML) programs, such as big topic models or deep neural nets, one usually assumes such tasks can only be attempted with industrial-sized clusters with thousands of nodes, which are out of reach for most practitioners or academic researchers. We consider this challenge in the context of topic modeling on web-scale corpora, and show that with a modest cluster of as few as 8 machines, we can train a topic model with 1 million topics and a 1-million-word vocabulary (for a total of 1 trillion parameters), on a document collection with 200 billion tokens -- a scale not yet reported even with thousands of machines. Our major contributions include: 1) a new, highly efficient O(1) Metropolis-Hastings sampling algorithm, whose running cost is (surprisingly) agnostic of model size, and empirically converges nearly an order of magnitude faster than current state-of-the-art Gibbs samplers; 2) a structure-aware model-parallel scheme, which leverages dependencies within the topic model, yielding a sampling strategy that is frugal on machine memory and network communication; 3) a differential data-structure for model storage, which uses separate data structures for high- and low-frequency words to allow extremely large models to fit in memory, while maintaining high inference speed; and 4) a bounded asynchronous data-parallel scheme, which allows efficient distributed processing of massive data via a parameter server. Our distribution strategy is an instance of the model-and-data-parallel programming model underlying the Petuum framework for general distributed ML, and was implemented on top of the Petuum open-source system. We provide experimental evidence showing how this development puts massive models within reach on a small cluster while still enjoying proportional time cost reductions with increasing cluster size, in comparison with alternative options. 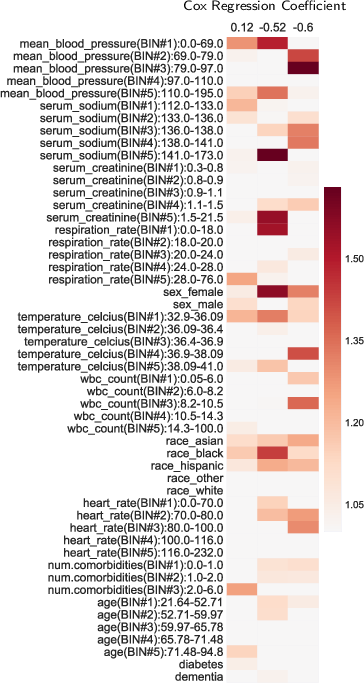 In time-to-event prediction problems, a standard approach to estimating an interpretable model is to use Cox proportional hazards, where features are selected based on lasso regularization or stepwise regression. However, these Cox-based models do not learn how different features relate. As an alternative, we present an interpretable neural network approach to jointly learn a survival model to predict time-to-event outcomes while simultaneously learning how features relate in terms of a topic model. In particular, we model each subject as a distribution over "topics", which are learned from clinical features as to help predict a time-to-event outcome. From a technical standpoint, we extend existing neural topic modeling approaches to also minimize a survival analysis loss function. We study the effectiveness of this approach on seven healthcare datasets on predicting time until death as well as hospital ICU length of stay, where we find that neural survival-supervised topic models achieves competitive accuracy with existing approaches while yielding interpretable clinical "topics" that explain feature relationships.

On some provably correct cases of variational inference for topic models

Variational inference is a very efficient and popular heuristic used in various forms in the context of latent variable models. It's closely related to Expectation Maximization (EM), and is applied when exact EM is computationally infeasible. Despite being immensely popular, current theoretical understanding of the effectiveness of variaitonal inference based algorithms is very limited. In this work we provide the first analysis of instances where variational inference algorithms converge to the global optimum, in the setting of topic models. More specifically, we show that variational inference provably learns the optimal parameters of a topic model under natural assumptions on the topic-word matrix and the topic priors. The properties that the topic word matrix must satisfy in our setting are related to the topic expansion assumption introduced in (Anandkumar et al., 2013), as well as the anchor words assumption in (Arora et al., 2012c). The assumptions on the topic priors are related to the well known Dirichlet prior, introduced to the area of topic modeling by (Blei et al., 2003). It is well known that initialization plays a crucial role in how well variational based algorithms perform in practice. The initializations that we use are fairly natural. One of them is similar to what is currently used in LDA-c, the most popular implementation of variational inference for topic models. The other one is an overlapping clustering algorithm, inspired by a work by (Arora et al., 2014) on dictionary learning, which is very simple and efficient. While our primary goal is to provide insights into when variational inference might work in practice, the multiplicative, rather than the additive nature of the variational inference updates forces us to use fairly non-standard proof arguments, which we believe will be of general interest.