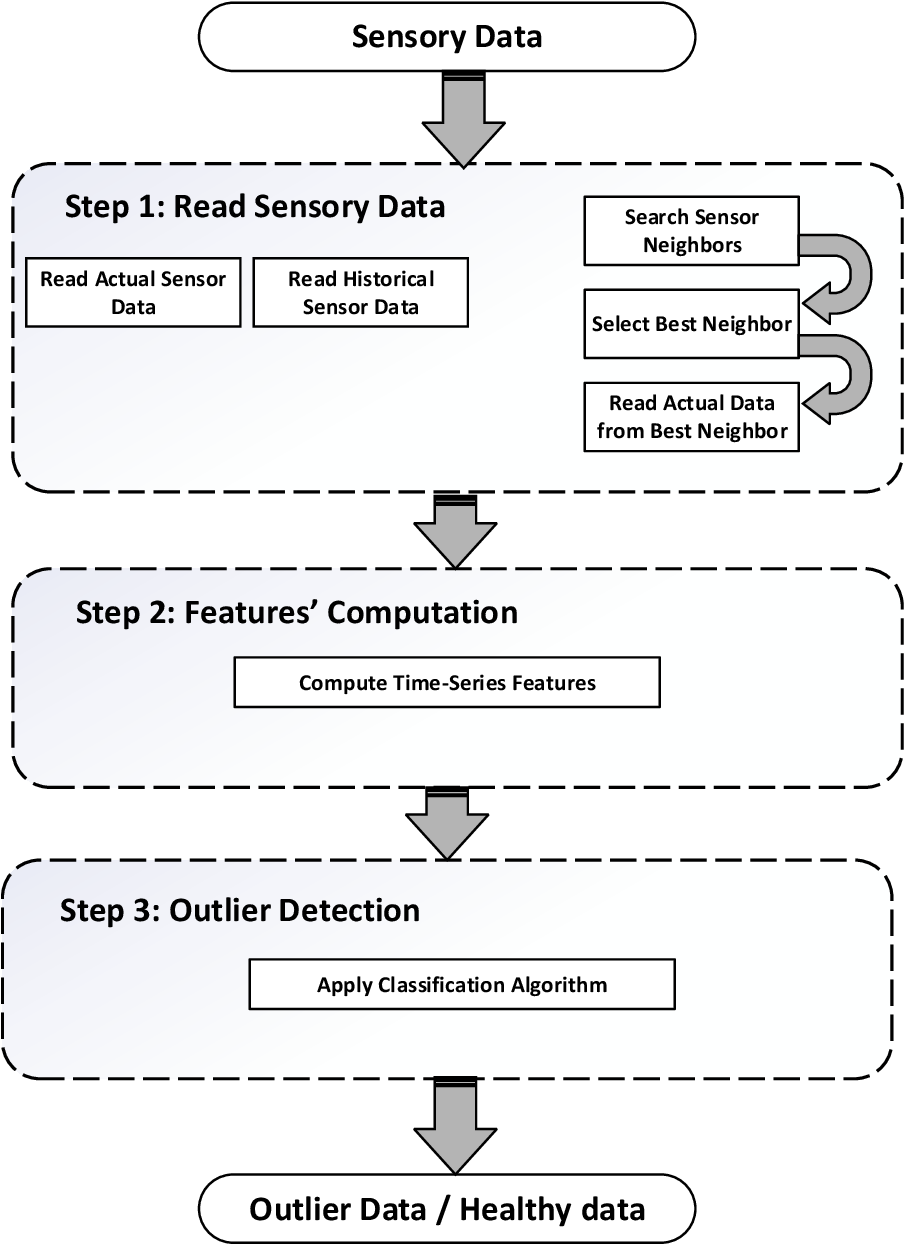 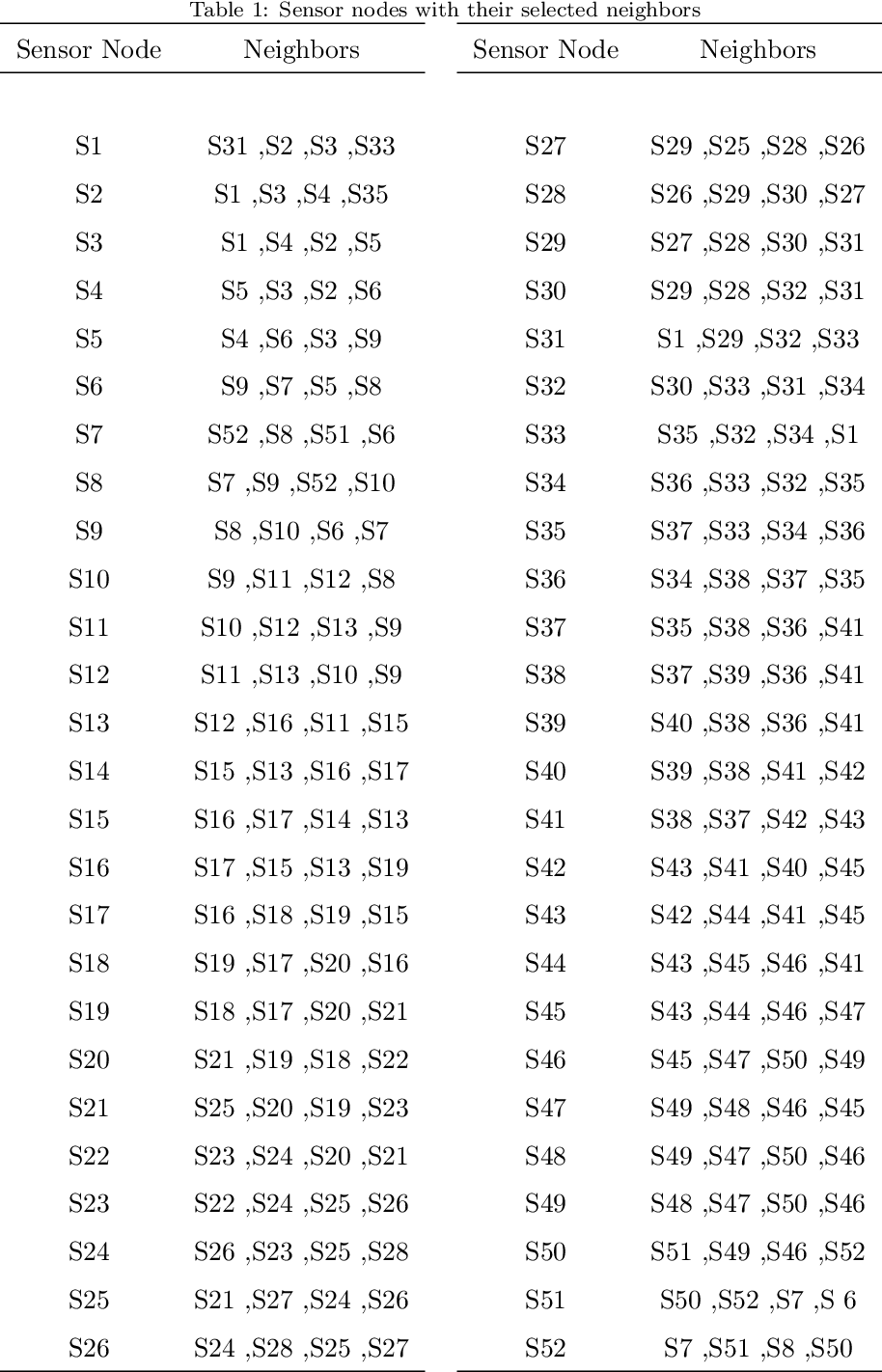 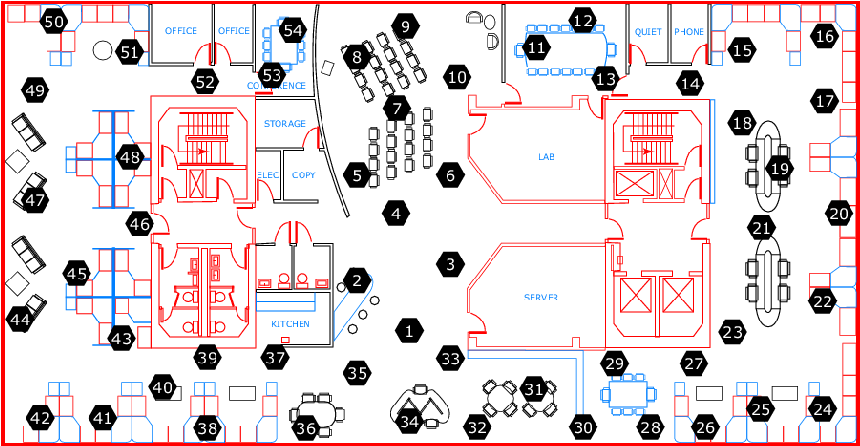 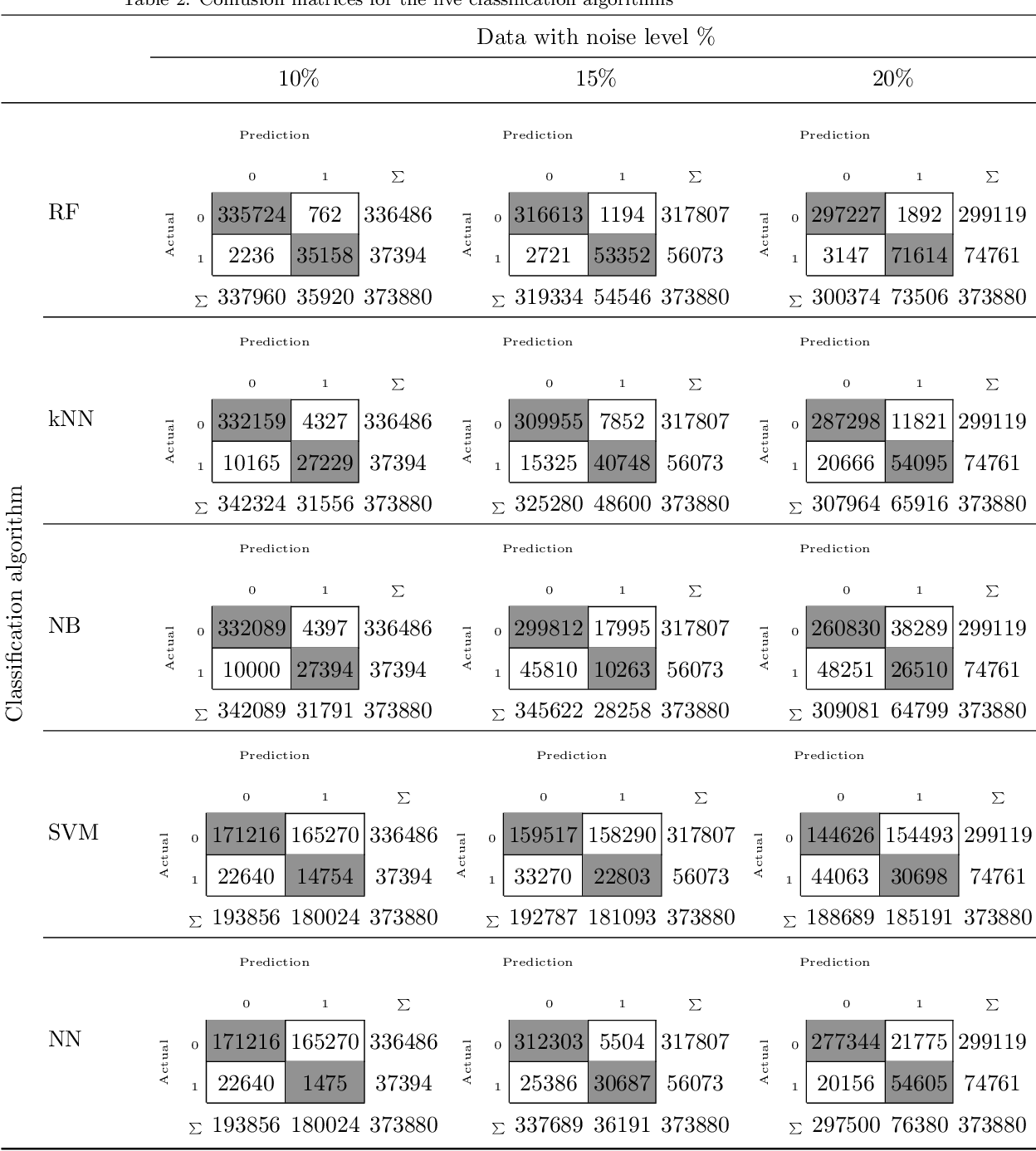 Wireless Sensor Networks (WSNs) have recently attracted greater attention worldwide due to their practicality in monitoring, communicating, and reporting specific physical phenomena. The data collected by WSNs is often inaccurate as a result of unavoidable environmental factors, which may include noise, signal weakness, or intrusion attacks depending on the specific situation. Sending high-noise data has negative effects not just on data accuracy and network reliability, but also regarding the decision-making processes in the base station. Anomaly detection, or outlier detection, is the process of detecting noisy data amidst the contexts thus described. The literature contains relatively few noise detection techniques in the context of WSNs, particularly for outlier-detection algorithms applying time series analysis, which considers the effective neighbors to ensure a global-collaborative detection. Hence, the research presented in this paper is intended to design and implement a global outlier-detection approach, which allows us to find and select appropriate neighbors to ensure an adaptive collaborative detection based on time-series analysis and entropy techniques. The proposed approach applies a random forest algorithm for identifying the best results. To measure the effectiveness and efficiency of the proposed approach, a comprehensive and real scenario provided by the Intel Berkeley Research lab has been simulated. Noisy data have been injected into the collected data randomly. The results obtained from the experiment then conducted experimentation demonstrate that our approach can detect anomalies with up to 99% accuracy. 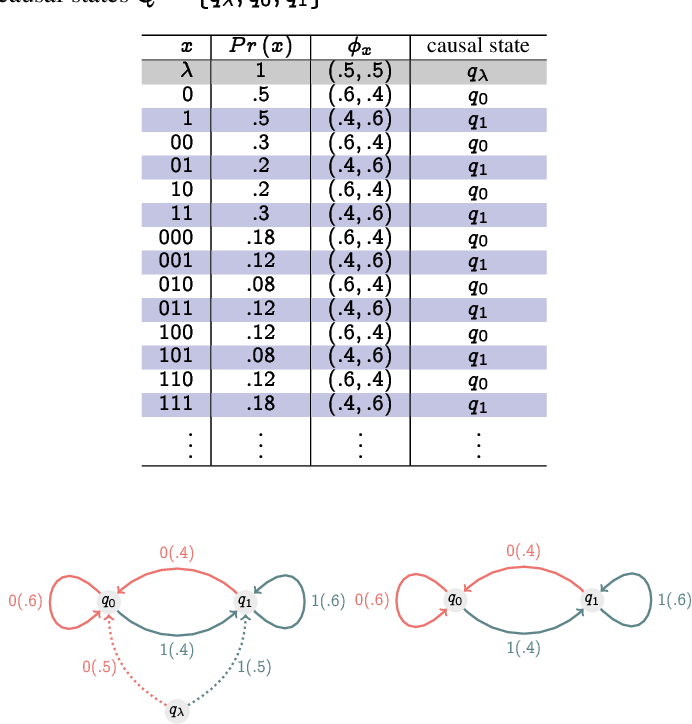 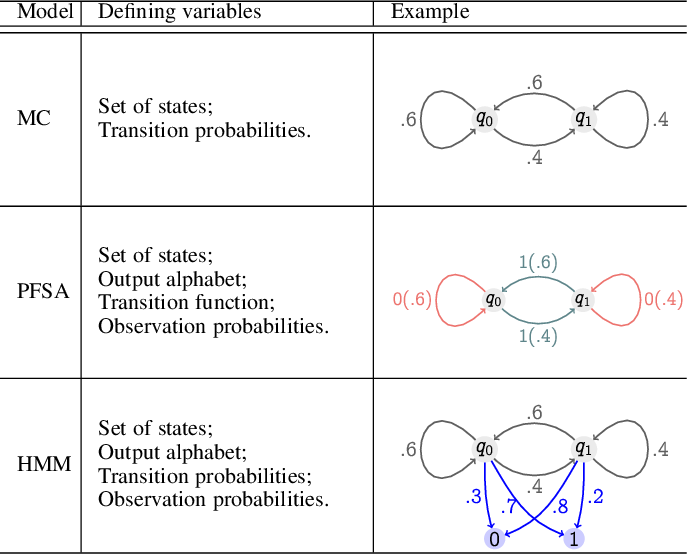 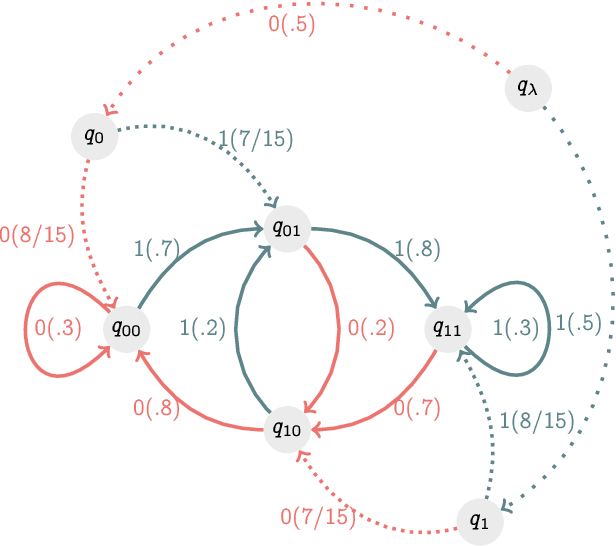 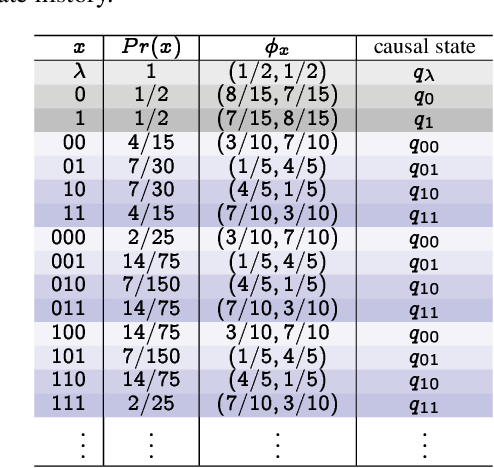 Recognizing subtle historical patterns is central to modeling and forecasting problems in time series analysis. Here we introduce and develop a new approach to quantify deviations in the underlying hidden generators of observed data streams, resulting in a new efficiently computable universal metric for time series. The proposed metric is in the sense that we can compare and contrast data streams regardless of where and how they are generated and without any feature engineering step. The approach proposed in this paper is conceptually distinct from our previous work on data smashing, and vastly improves discrimination performance and computing speed. The core idea here is the generalization of the notion of KL divergence often used to compare probability distributions to a notion of divergence in time series. We call this the sequence likelihood (SL) divergence, which may be used to measure deviations within a well-defined class of discrete-valued stochastic processes. We devise efficient estimators of SL divergence from finite sample paths and subsequently formulate a universal metric useful for computing distance between time series produced by hidden stochastic generators. 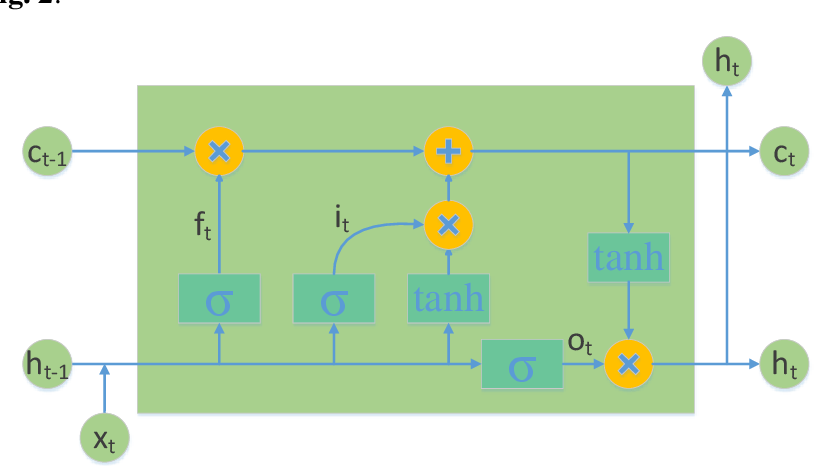 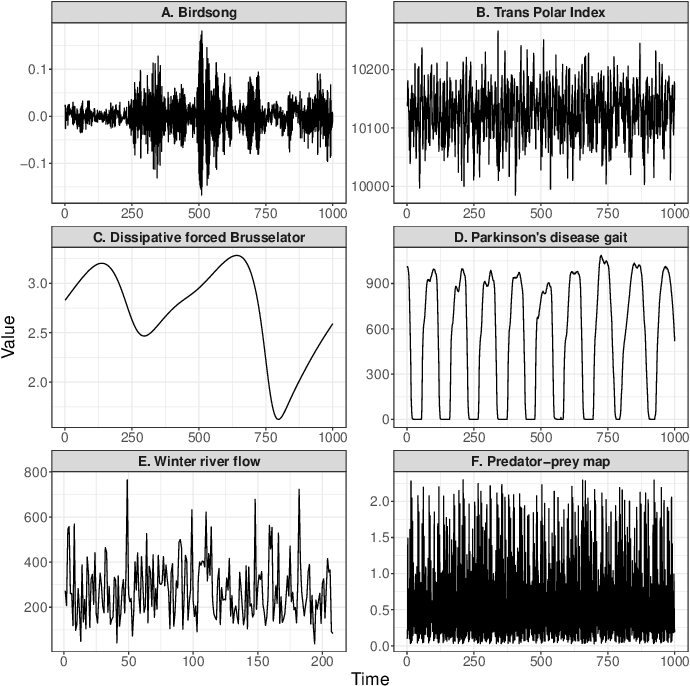 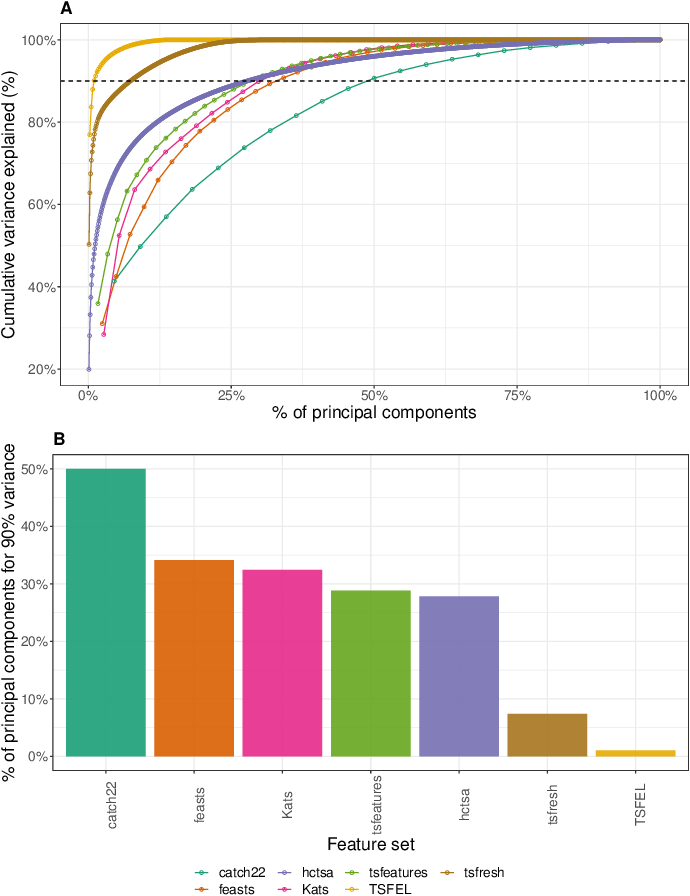 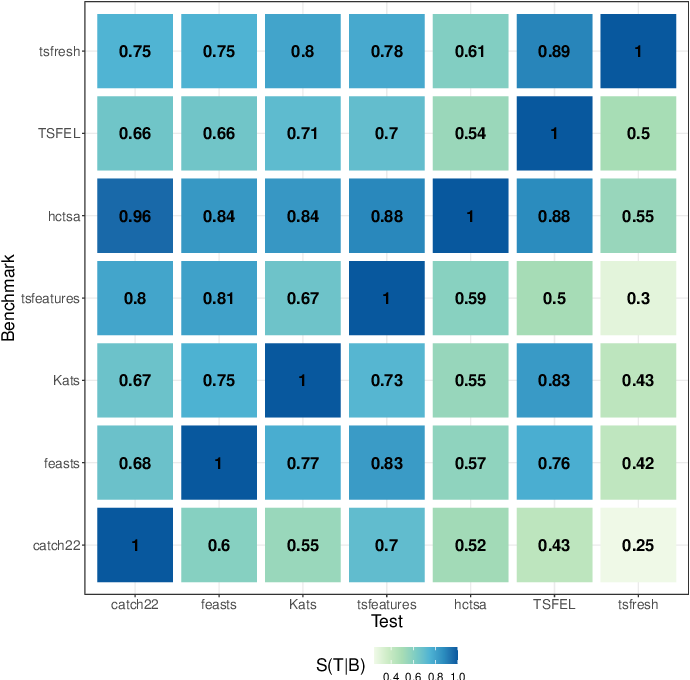 Solving time-series problems with features has been rising in popularity due to the availability of software for feature extraction. Feature-based time-series analysis can now be performed using many different feature sets, including hctsa (7730 features: Matlab), feasts (42 features: R), tsfeatures (63 features: R), Kats (40 features: Python), tsfresh (up to 1558 features: Python), TSFEL (390 features: Python), and the C-coded catch22 (22 features: Matlab, R, Python, and Julia). There is substantial overlap in the types of methods included in these sets (e.g., properties of the autocorrelation function and Fourier power spectrum), but they are yet to be systematically compared. Here we compare these seven sets on computational speed, assess the redundancy of features contained in each, and evaluate the overlap and redundancy between them. We take an empirical approach to feature similarity based on outputs across a diverse set of real-world and simulated time series. We find that feature sets vary across three orders of magnitude in their computation time per feature on a laptop for a 1000-sample series, from the fastest sets catch22 and TSFEL (~0.1ms per feature) to tsfeatures (~3s per feature). Using PCA to evaluate feature redundancy within each set, we find the highest within-set redundancy for TSFEL and tsfresh. For example, in TSFEL, 90% of the variance across 390 features can be captured with just four PCs. Finally, we introduce a metric for quantifying overlap between pairs of feature sets, which indicates substantial overlap. We found that the largest feature set, hctsa, is the most comprehensive, and that tsfresh is the most distinctive, due to its incorporation of many low-level Fourier coefficients. Our results provide empirical understanding of the differences between existing feature sets, information that can be used to better tailor feature sets to their applications. 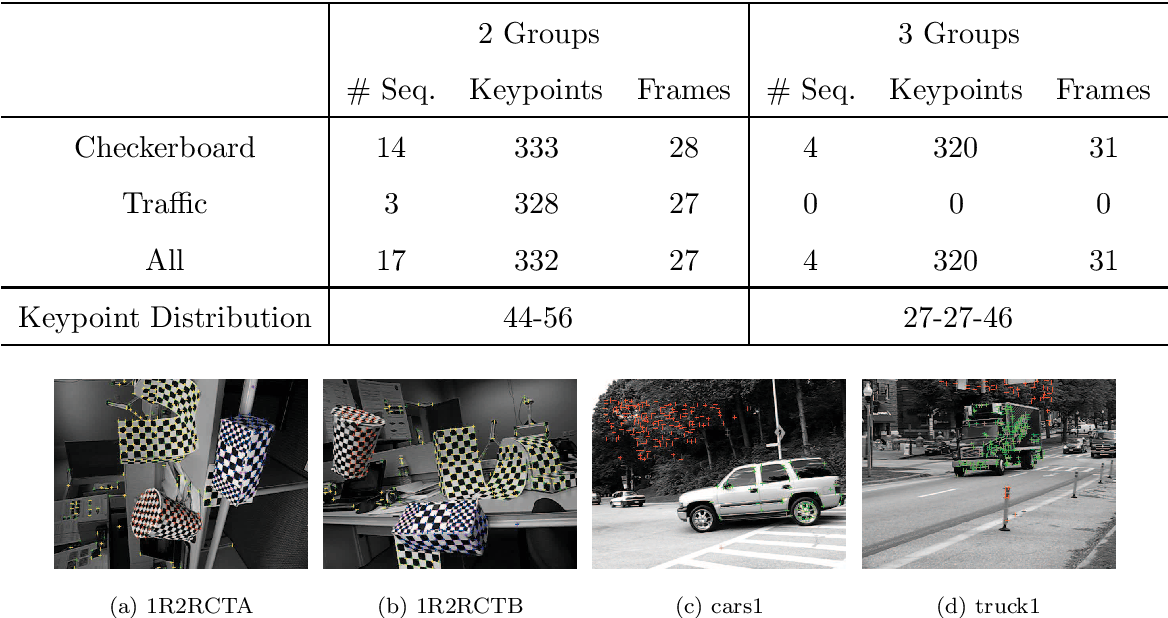 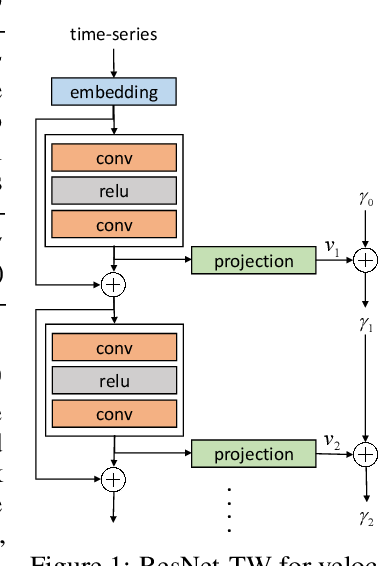 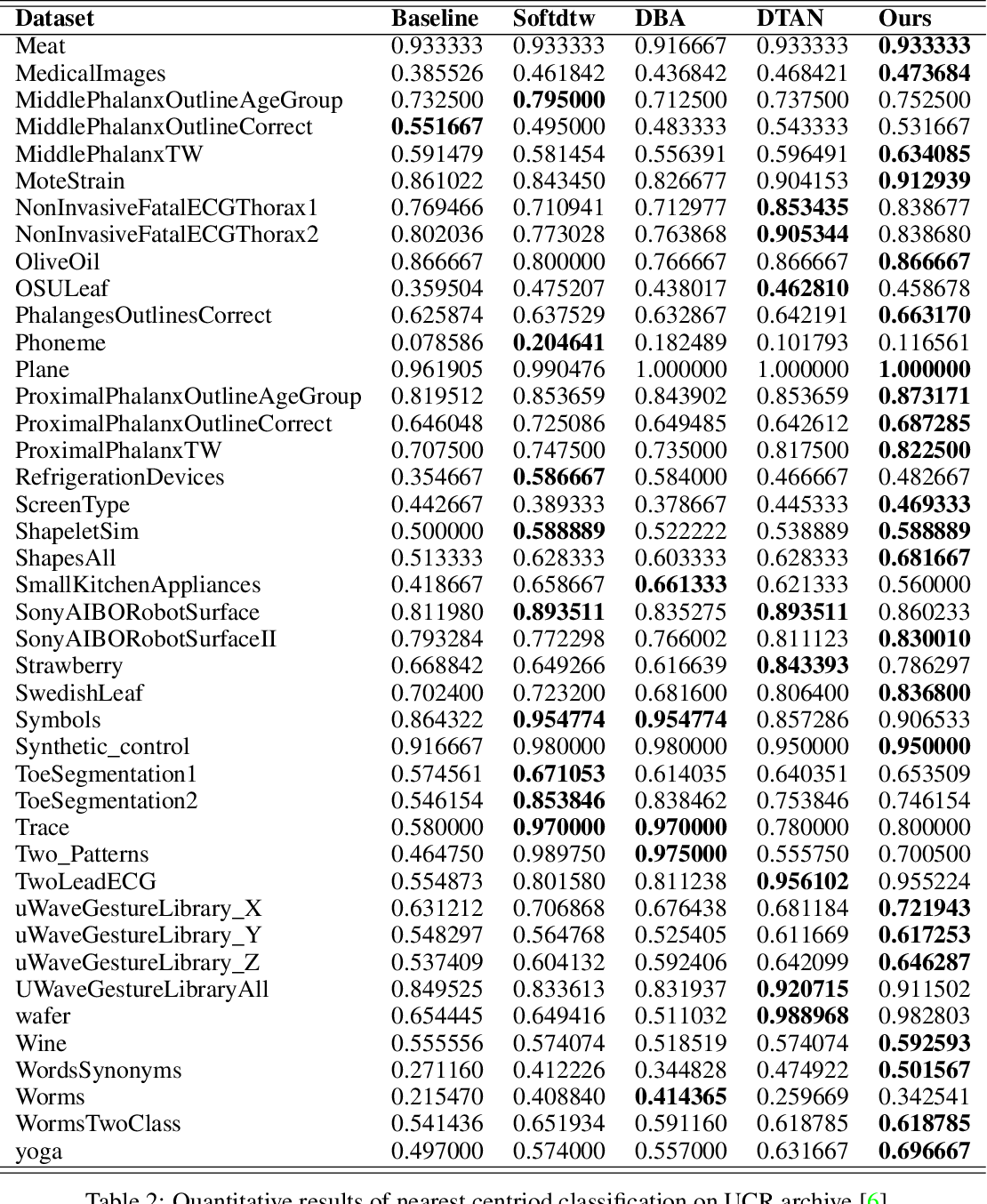 Non-linear (large) time warping is a challenging source of nuisance in time-series analysis. In this paper, we propose a novel diffeomorphic temporal transformer network for both pairwise and joint time-series alignment. Our ResNet-TW (Deep Residual Network for Time Warping) tackles the alignment problem by compositing a flow of incremental diffeomorphic mappings. Governed by the flow equation, our Residual Network (ResNet) builds smooth, fluid and regular flows of velocity fields and consequently generates smooth and invertible transformations (i.e. diffeomorphic warping functions). Inspired by the elegant Large Deformation Diffeomorphic Metric Mapping (LDDMM) framework, the final transformation is built by the flow of time-dependent vector fields which are none other than the building blocks of our Residual Network. The latter is naturally viewed as an Eulerian discretization schema of the flow equation (an ODE). Once trained, our ResNet-TW aligns unseen data by a single inexpensive forward pass. As we show in experiments on both univariate (84 datasets from UCR archive) and multivariate time-series (MSR Action-3D, Florence-3D and MSR Daily Activity), ResNet-TW achieves competitive performance in joint alignment and classification.

Many real-world applications involve multivariate, geo-tagged time series data: at each location, multiple sensors record corresponding measurements. For example, air quality monitoring system records PM2.5, CO, etc. The resulting time-series data often has missing values due to device outages or communication errors. In order to impute the missing values, state-of-the-art methods are built on Recurrent Neural Networks (RNN), which process each time stamp sequentially, prohibiting the direct modeling of the relationship between distant time stamps. Recently, the self-attention mechanism has been proposed for sequence modeling tasks such as machine translation, significantly outperforming RNN because the relationship between each two time stamps can be modeled explicitly. In this paper, we are the first to adapt the self-attention mechanism for multivariate, geo-tagged time series data. In order to jointly capture the self-attention across multiple dimensions, including time, location and the sensor measurements, while maintain low computational complexity, we propose a novel approach called Cross-Dimensional Self-Attention (CDSA) to process each dimension sequentially, yet in an order-independent manner. Our extensive experiments on four real-world datasets, including three standard benchmarks and our newly collected NYC-traffic dataset, demonstrate that our approach outperforms the state-of-the-art imputation and forecasting methods. A detailed systematic analysis confirms the effectiveness of our design choices. 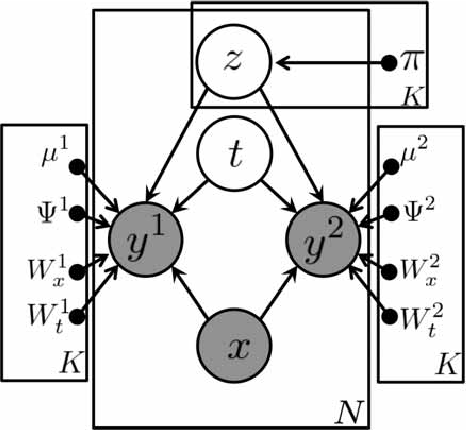 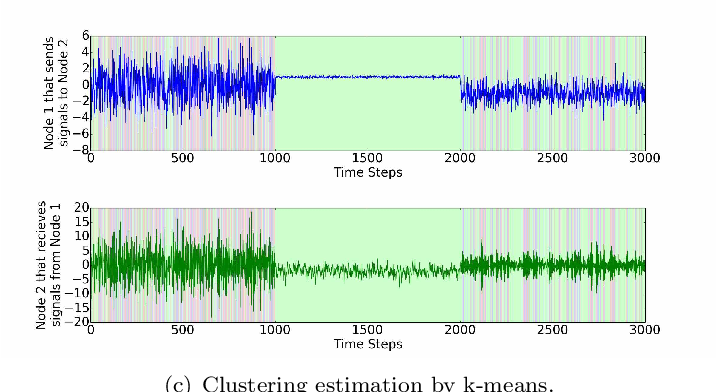 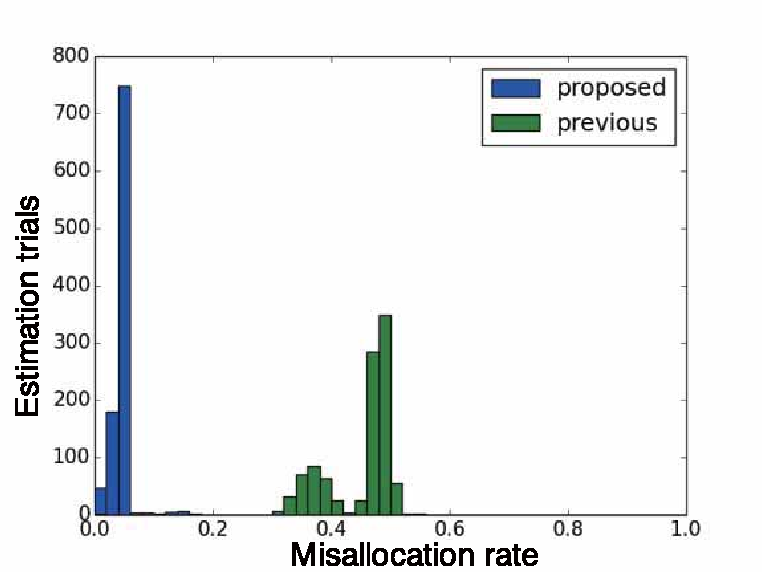