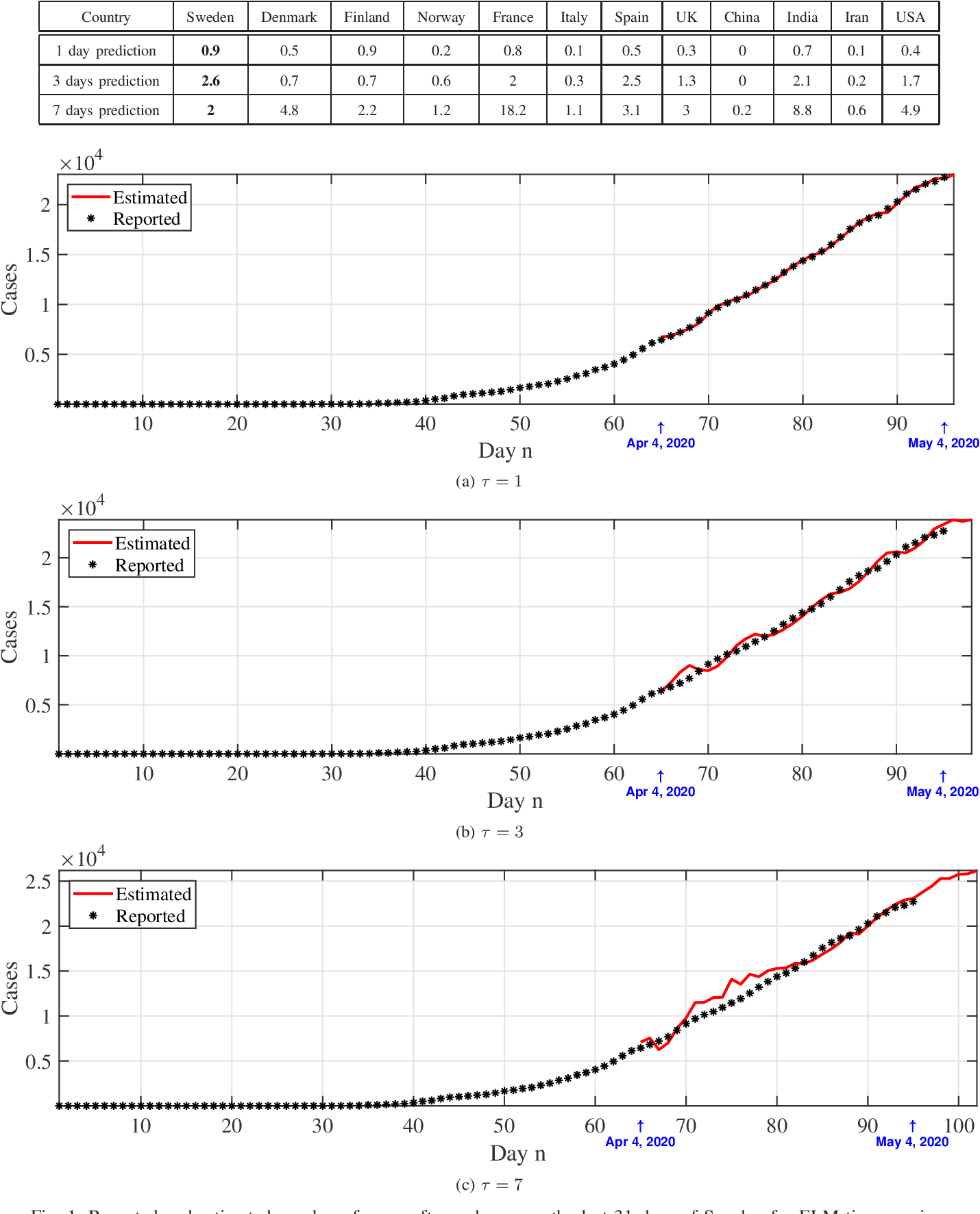 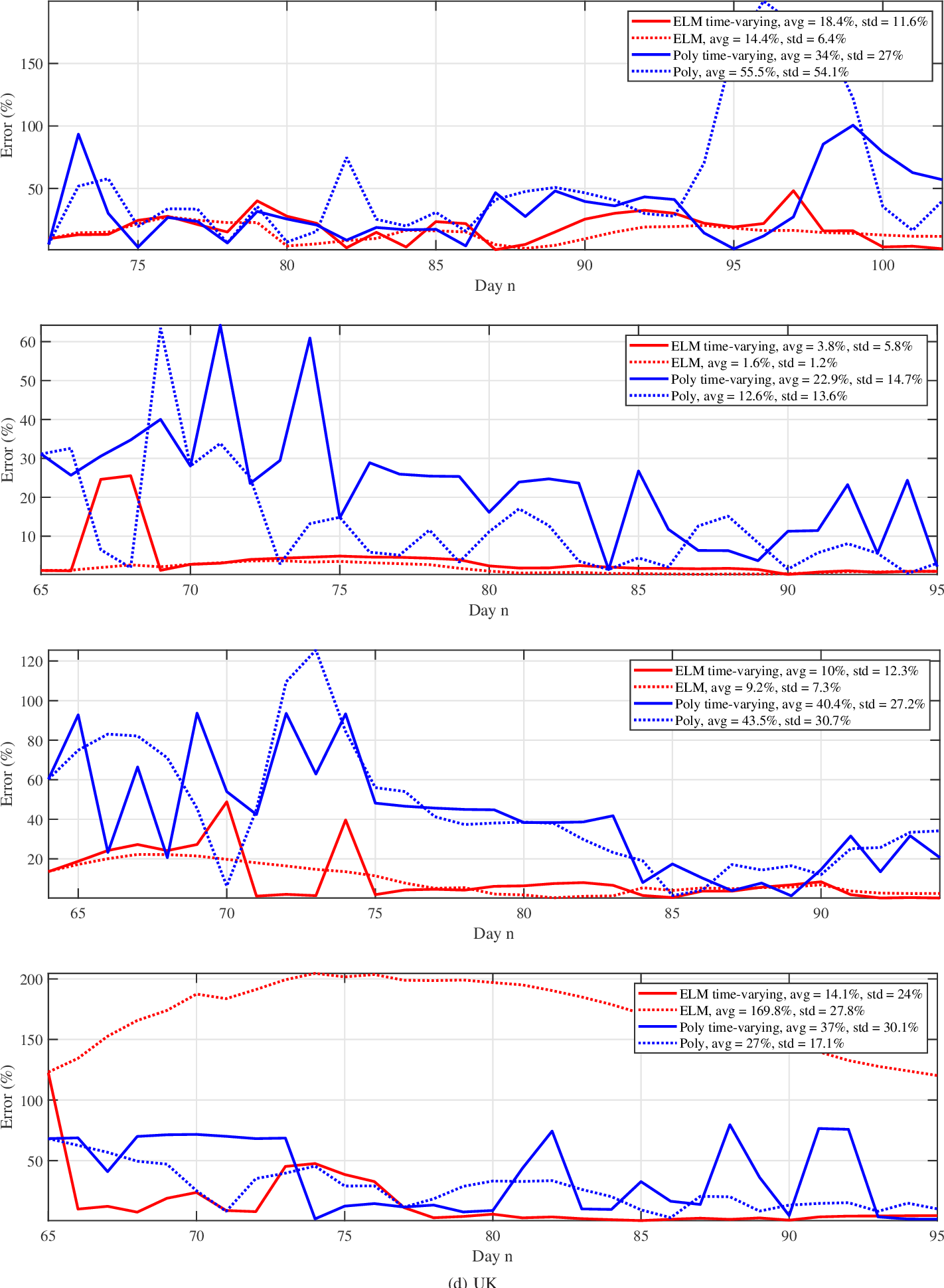 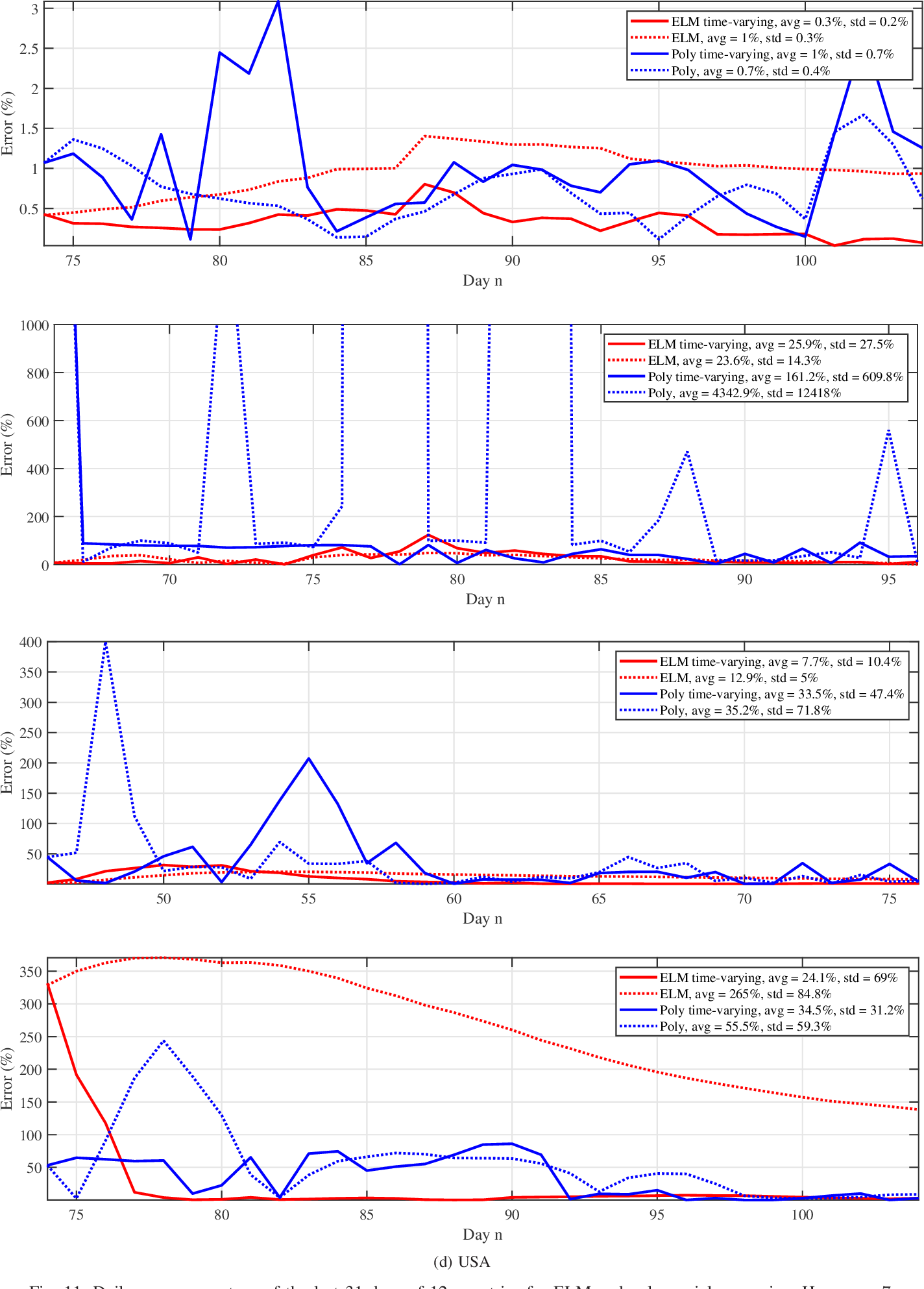 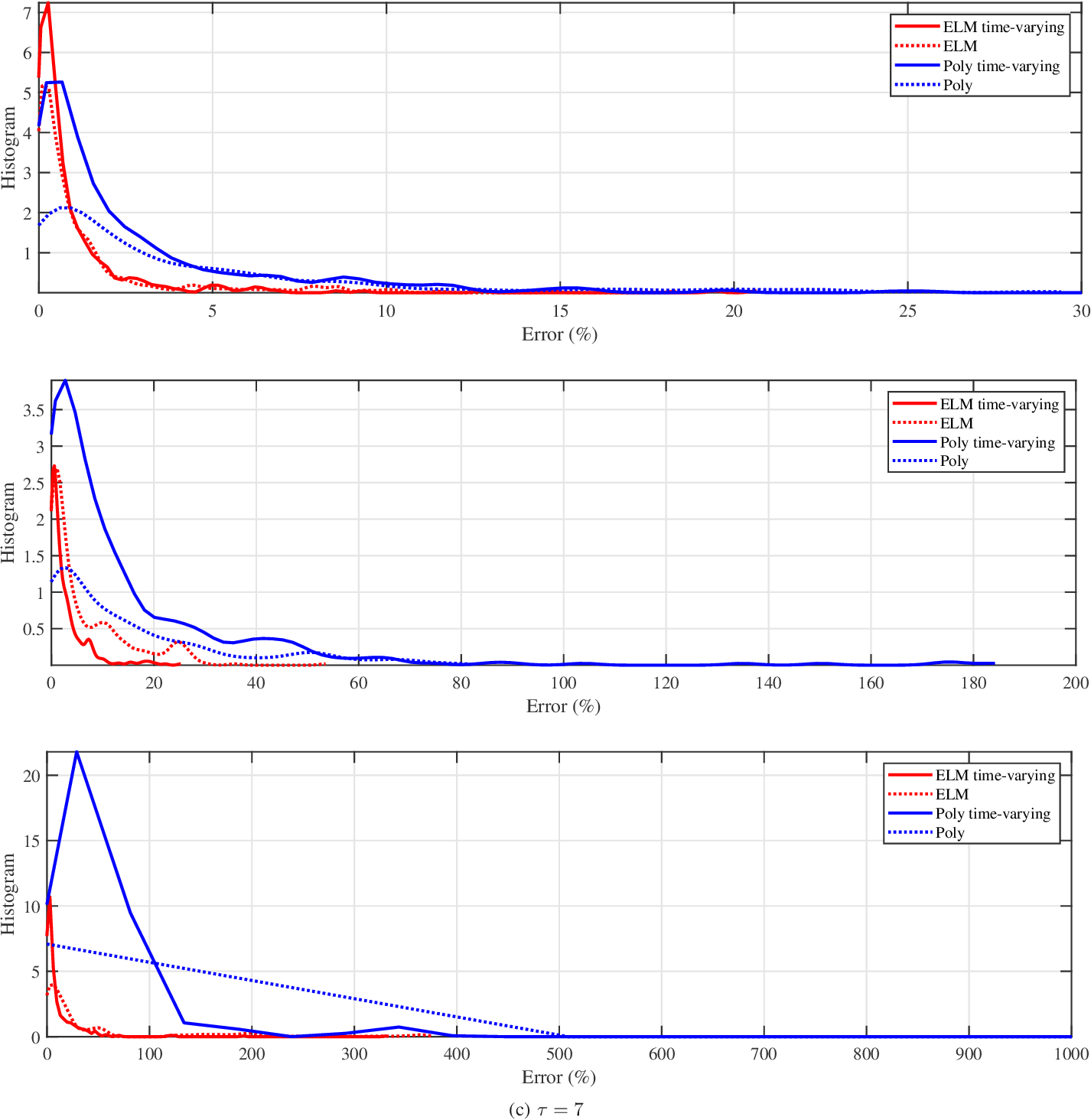 We provide a predictive analysis of the spread of COVID-19, also known as SARS-CoV-2, using the dataset made publicly available online by the Johns Hopkins University. Our main objective is to provide predictions for the number of infected people for different countries. The predictive analysis is done using time-series data transformed on a logarithmic scale. We use two well-known methods for prediction: polynomial regression and neural network. As the number of training data for each country is limited, we use a single-layer neural network called the extreme learning machine (ELM) to avoid over-fitting. Due to the non-stationary nature of the time-series, a sliding window approach is used to provide a more accurate prediction.

We develop a new method to detect anomalies within time series, which is essential in many application domains, reaching from self-driving cars, finance, and marketing to medical diagnosis and epidemiology. The method is based on self-supervised deep learning that has played a key role in facilitating deep anomaly detection on images, where powerful image transformations are available. However, such transformations are widely unavailable for time series. Addressing this, we develop Local Neural Transformations(LNT), a method learning local transformations of time series from data. The method produces an anomaly score for each time step and thus can be used to detect anomalies within time series. We prove in a theoretical analysis that our novel training objective is more suitable for transformation learning than previous deep Anomaly detection(AD) methods. Our experiments demonstrate that LNT can find anomalies in speech segments from the LibriSpeech data set and better detect interruptions to cyber-physical systems than previous work. Visualization of the learned transformations gives insight into the type of transformations that LNT learns. 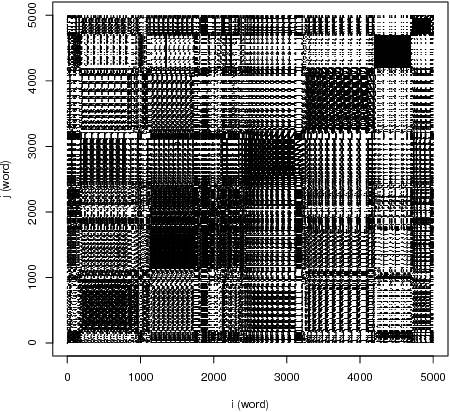 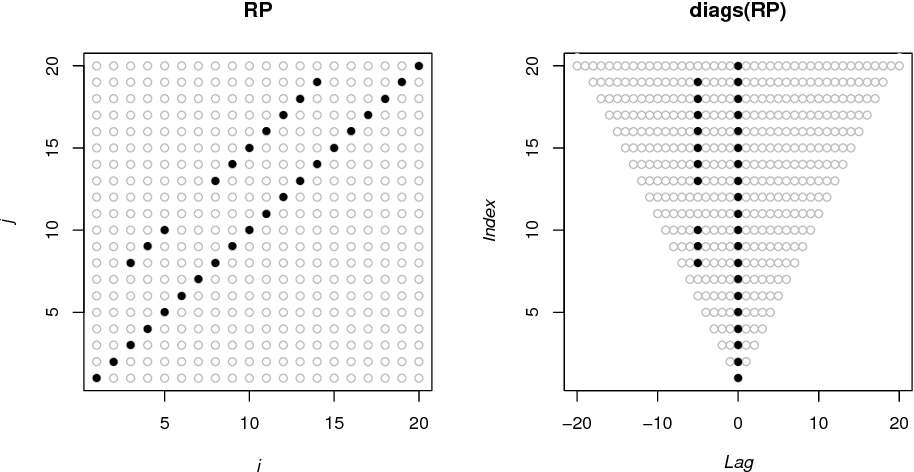 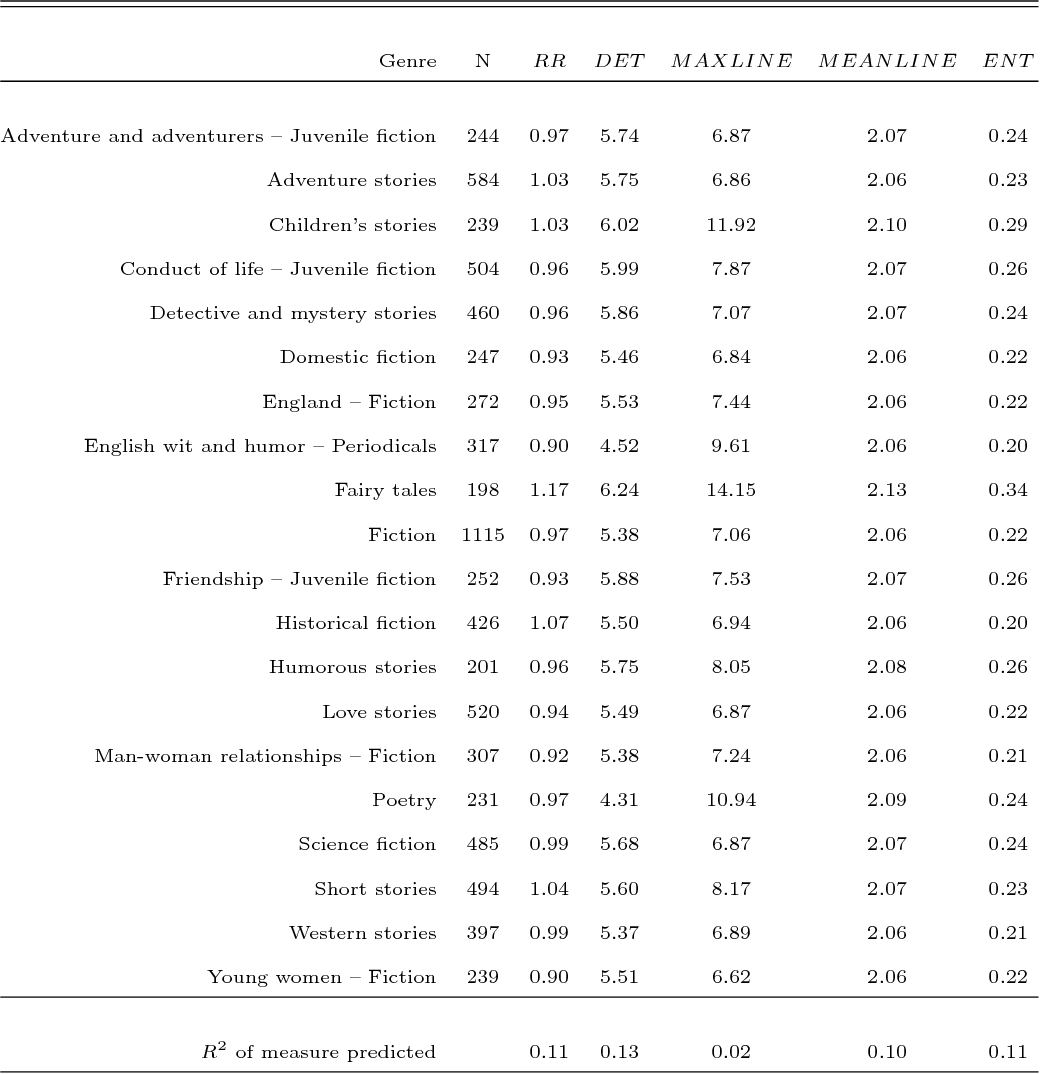 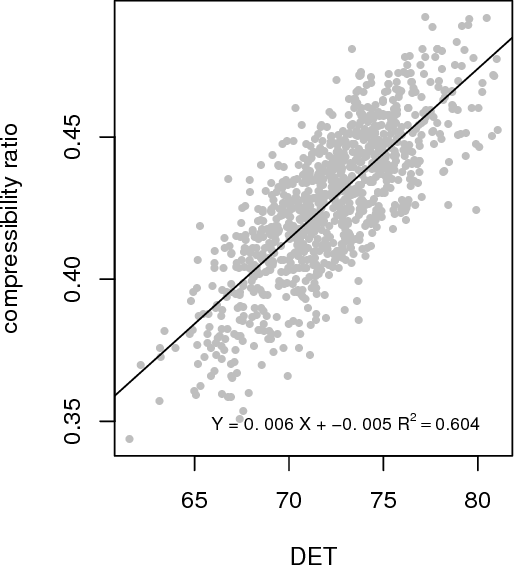 Writing and reading are dynamic processes. As an author composes a text, a sequence of words is produced. This sequence is one that, the author hopes, causes a revisitation of certain thoughts and ideas in others. These processes of composition and revisitation by readers are ordered in time. This means that text itself can be investigated under the lens of dynamical systems. A common technique for analyzing the behavior of dynamical systems, known as recurrence quantification analysis (RQA), can be used as a method for analyzing sequential structure of text. RQA treats text as a sequential measurement, much like a time series, and can thus be seen as a kind of dynamic natural language processing (NLP). The extension has several benefits. Because it is part of a suite of time series analysis tools, many measures can be extracted in one common framework. Secondly, the measures have a close relationship with some commonly used measures from natural language processing. Finally, using recurrence analysis offers an opportunity expand analysis of text by developing theoretical descriptions derived from complex dynamic systems. We showcase an example analysis on 8,000 texts from the Gutenberg Project, compare it to well-known NLP approaches, and describe an R package (crqanlp) that can be used in conjunction with R library crqa. 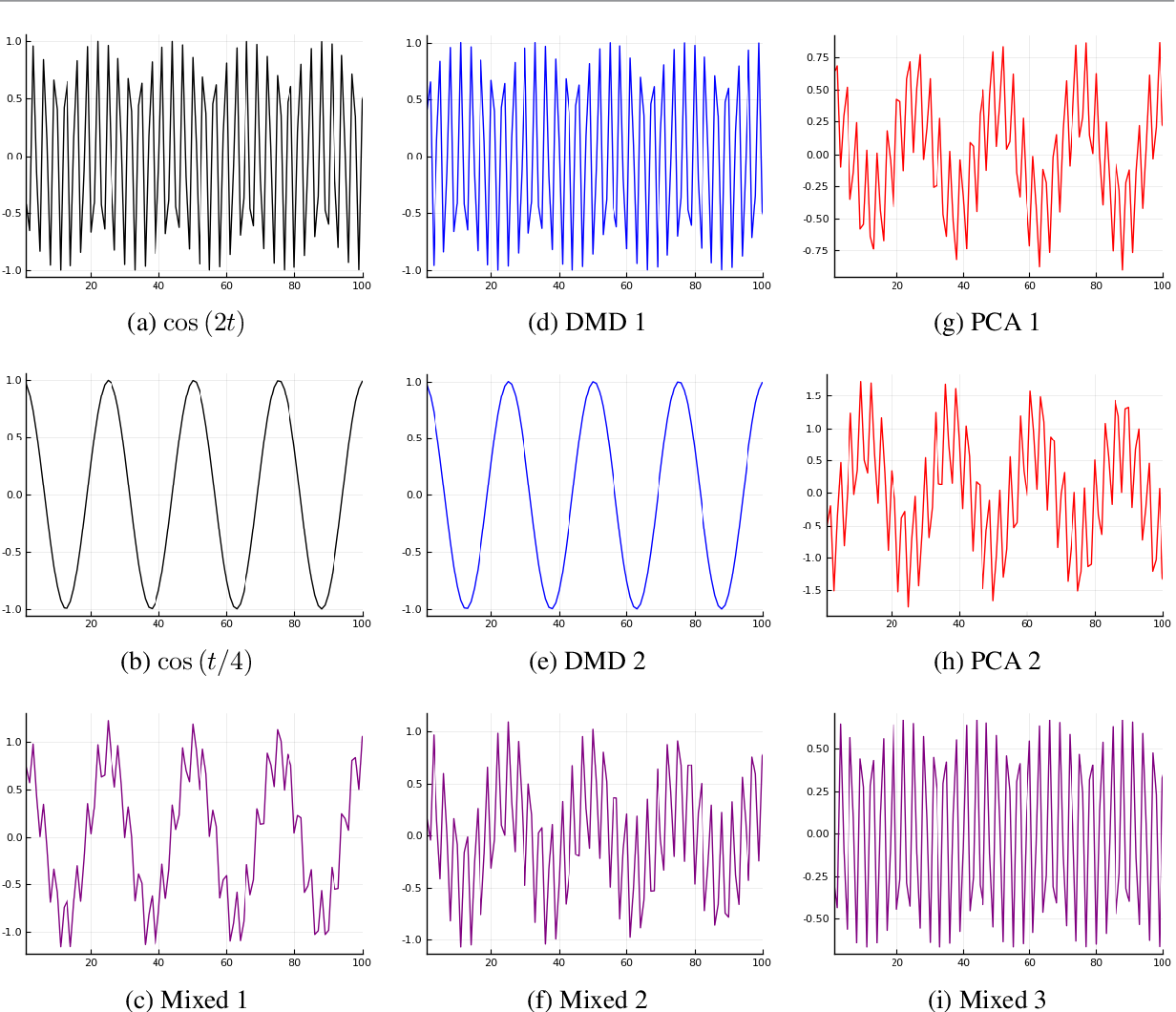 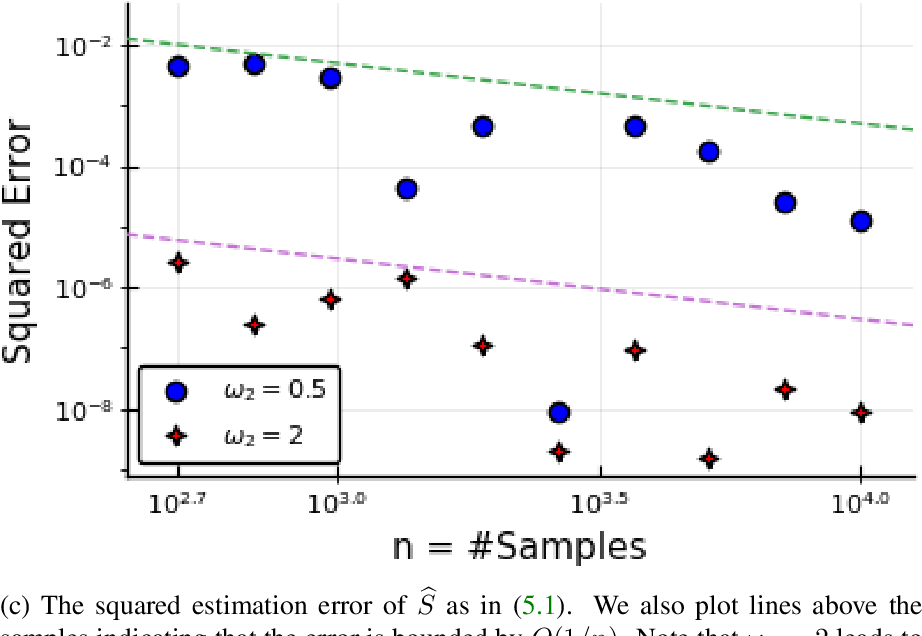 The dynamic mode decomposition (DMD) extracted dynamic modes are the non-orthogonal eigenvectors of the matrix that best approximates the one-step temporal evolution of the multivariate samples. In the context of dynamic system analysis, the extracted dynamic modes are a generalization of global stability modes. We apply DMD to a data matrix whose rows are linearly independent, additive mixtures of latent time series. We show that when the latent time series are uncorrelated at a lag of one time-step then, in the large sample limit, the recovered dynamic modes will approximate, up to a column-wise normalization, the columns of the mixing matrix. Thus, DMD is a time series blind source separation algorithm in disguise, but is different from closely related second order algorithms such as SOBI and AMUSE. All can unmix mixed ergodic Gaussian time series in a way that ICA fundamentally cannot. We use our insights on single lag DMD to develop a higher-lag extension, analyze the finite sample performance with and without randomly missing data, and identify settings where the higher lag variant can outperform the conventional single lag variant. We validate our results with numerical simulations, and highlight how DMD can be used in change point detection. 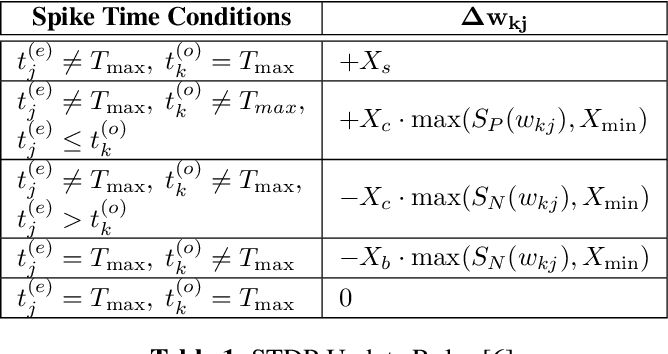 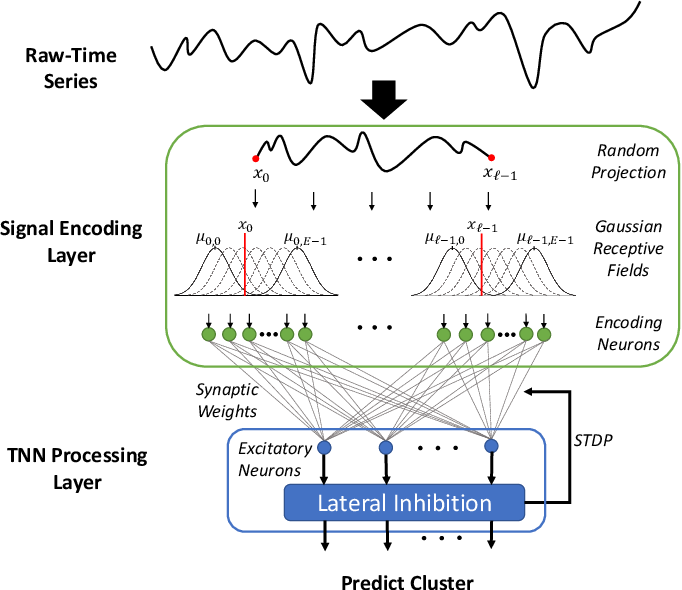 Unsupervised time series clustering is a challenging problem with diverse industrial applications such as anomaly detection, bio-wearables, etc. These applications typically involve small, low-power devices on the edge that collect and process real-time sensory signals. State-of-the-art time-series clustering methods perform some form of loss minimization that is extremely computationally intensive from the perspective of edge devices. In this work, we propose a neuromorphic approach to unsupervised time series clustering based on Temporal Neural Networks that is capable of ultra low-power, continuous online learning. We demonstrate its clustering performance on a subset of UCR Time Series Archive datasets. Our results show that the proposed approach either outperforms or performs similarly to most of the existing algorithms while being far more amenable for efficient hardware implementation. Our hardware assessment analysis shows that in 7 nm CMOS the proposed architecture, on average, consumes only about 0.005 mm^2 die area and 22 uW power and can process each signal with about 5 ns latency.


* Accepted for publication at ICASSP 2021 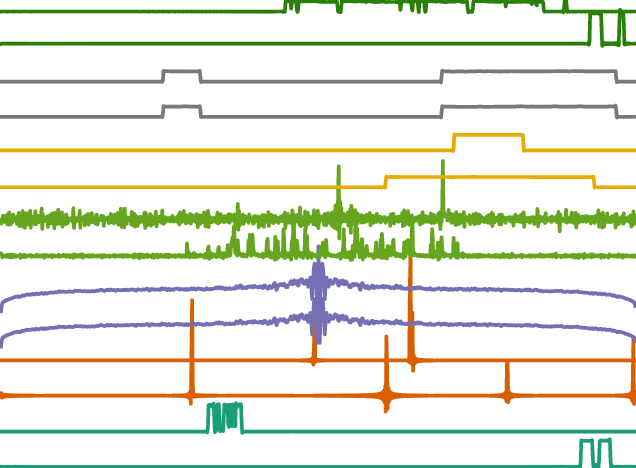 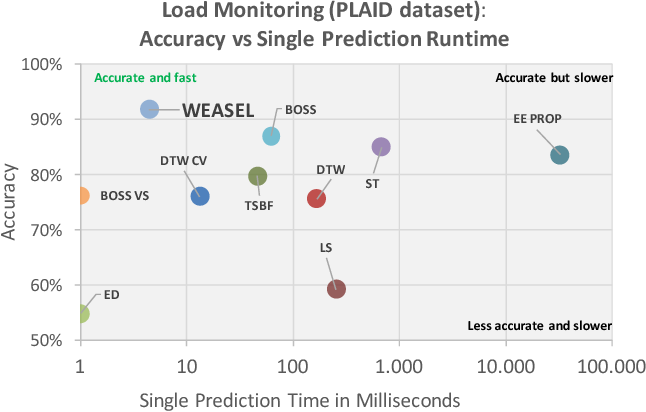 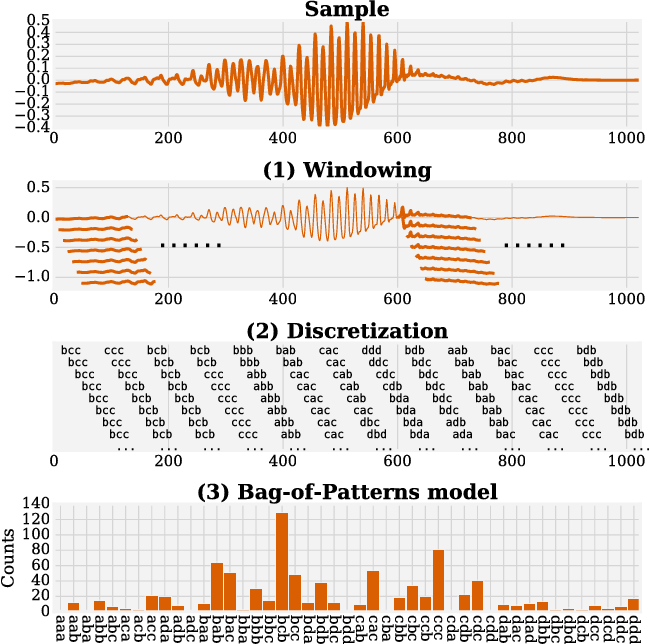 Time series (TS) occur in many scientific and commercial applications, ranging from earth surveillance to industry automation to the smart grids. An important type of TS analysis is classification, which can, for instance, improve energy load forecasting in smart grids by detecting the types of electronic devices based on their energy consumption profiles recorded by automatic sensors. Such sensor-driven applications are very often characterized by (a) very long TS and (b) very large TS datasets needing classification. However, current methods to time series classification (TSC) cannot cope with such data volumes at acceptable accuracy; they are either scalable but offer only inferior classification quality, or they achieve state-of-the-art classification quality but cannot scale to large data volumes. In this paper, we present WEASEL (Word ExtrAction for time SEries cLassification), a novel TSC method which is both scalable and accurate. Like other state-of-the-art TSC methods, WEASEL transforms time series into feature vectors, using a sliding-window approach, which are then analyzed through a machine learning classifier. The novelty of WEASEL lies in its specific method for deriving features, resulting in a much smaller yet much more discriminative feature set. On the popular UCR benchmark of 85 TS datasets, WEASEL is more accurate than the best current non-ensemble algorithms at orders-of-magnitude lower classification and training times, and it is almost as accurate as ensemble classifiers, whose computational complexity makes them inapplicable even for mid-size datasets. The outstanding robustness of WEASEL is also confirmed by experiments on two real smart grid datasets, where it out-of-the-box achieves almost the same accuracy as highly tuned, domain-specific methods.

Topological Data Analysis (TDA) is a recent approach to analyze data sets from the perspective of their topological structure. Its use for time series data has been limited to the field of financial time series primarily and as a method for feature generation in machine learning applications. In this work, TDA is presented as a technique to gain additional understanding of the customers' loyalty for business-to-business customer relationship management. Increasing loyalty and strengthening relationships with key accounts remain an active topic of discussion both for researchers and managers. Using two public and two proprietary data sets of commercial data, this research shows that the technique enables analysts to better understand their customer base and identify prospective opportunities. In addition, the approach can be used as a clustering method to increase the accuracy of a predictive model for loyalty scoring. This work thus seeks to introduce TDA as a viable tool for data analysis to the quantitate marketing practitioner. 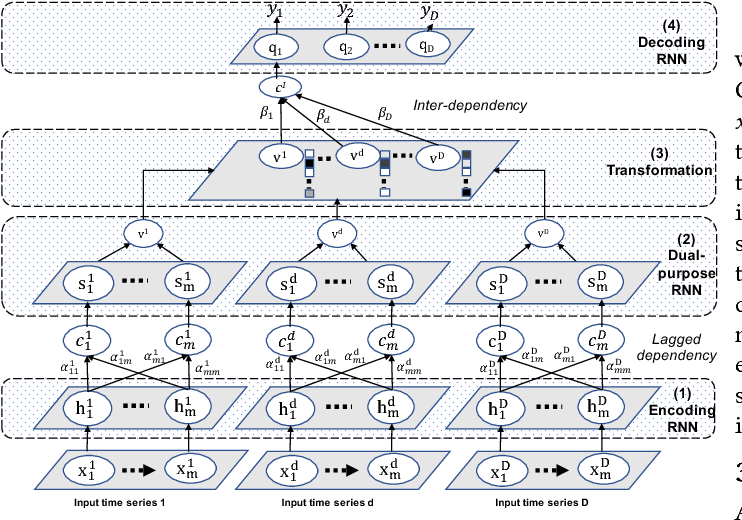 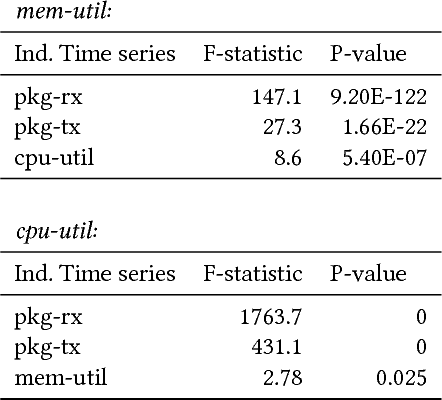 Discovering temporal lagged and inter-dependencies in multivariate time series data is an important task. However, in many real-world applications, such as commercial cloud management, manufacturing predictive maintenance, and portfolios performance analysis, such dependencies can be non-linear and time-variant, which makes it more challenging to extract such dependencies through traditional methods such as Granger causality or clustering. In this work, we present a novel deep learning model that uses multiple layers of customized gated recurrent units (GRUs) for discovering both time lagged behaviors as well as inter-timeseries dependencies in the form of directed weighted graphs. We introduce a key component of Dual-purpose recurrent neural network that decodes information in the temporal domain to discover lagged dependencies within each time series, and encodes them into a set of vectors which, collected from all component time series, form the informative inputs to discover inter-dependencies. Though the discovery of two types of dependencies are separated at different hierarchical levels, they are tightly connected and jointly trained in an end-to-end manner. With this joint training, learning of one type of dependency immediately impacts the learning of the other one, leading to overall accurate dependencies discovery. We empirically test our model on synthetic time series data in which the exact form of (non-linear) dependencies is known. We also evaluate its performance on two real-world applications, (i) performance monitoring data from a commercial cloud provider, which exhibit highly dynamic, non-linear, and volatile behavior and, (ii) sensor data from a manufacturing plant. We further show how our approach is able to capture these dependency behaviors via intuitive and interpretable dependency graphs and use them to generate highly accurate forecasts.