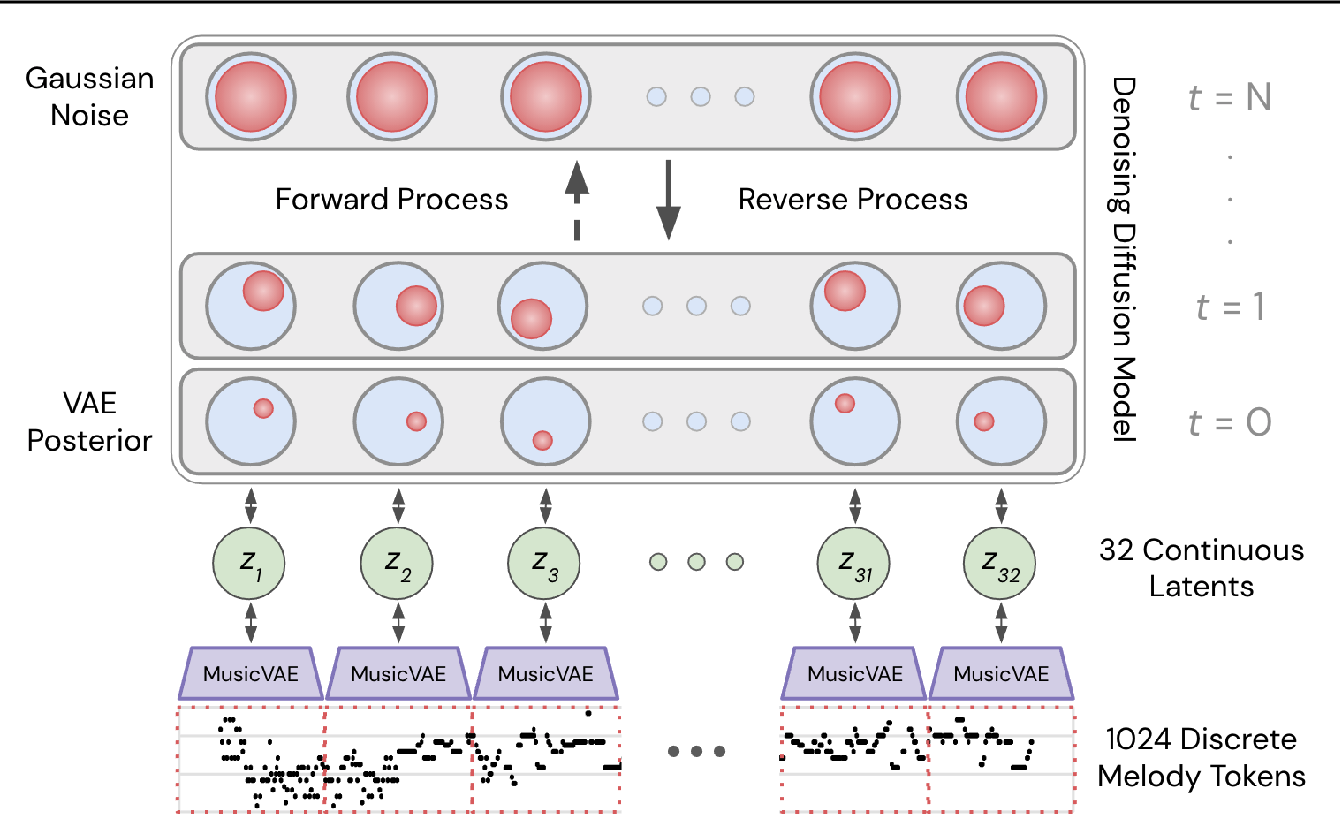 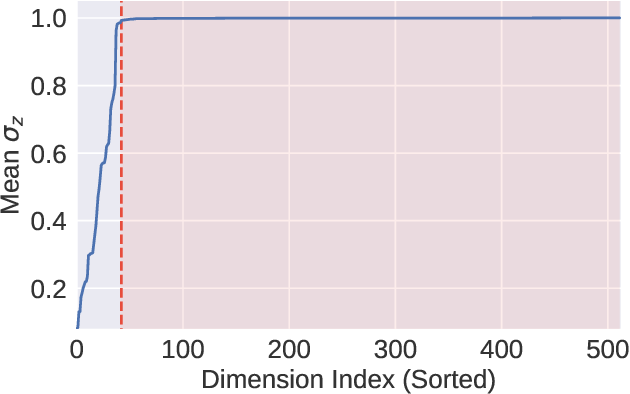 Score-based generative models and diffusion probabilistic models have been successful at generating high-quality samples in continuous domains such as images and audio. However, due to their Langevin-inspired sampling mechanisms, their application to discrete and sequential data has been limited. In this work, we present a technique for training diffusion models on sequential data by parameterizing the discrete domain in the continuous latent space of a pre-trained variational autoencoder. Our method is non-autoregressive and learns to generate sequences of latent embeddings through the reverse process and offers parallel generation with a constant number of iterative refinement steps. We apply this technique to modeling symbolic music and show strong unconditional generation and post-hoc conditional infilling results compared to autoregressive language models operating over the same continuous embeddings. 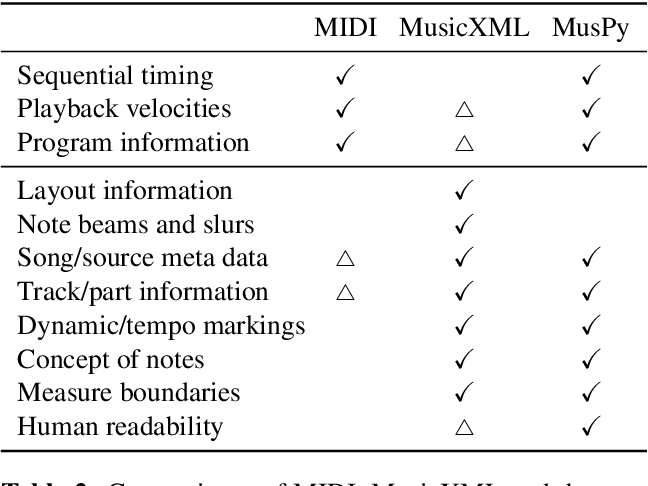 In this paper, we present MusPy, an open source Python library for symbolic music generation. MusPy provides easy-to-use tools for essential components in a music generation system, including dataset management, data I/O, data preprocessing and model evaluation. In order to showcase its potential, we present statistical analysis of the eleven datasets currently supported by MusPy. Moreover, we conduct a cross-dataset generalizability experiment by training an autoregressive model on each dataset and measuring held-out likelihood on the others---a process which is made easier by MusPy's dataset management system. The results provide a map of domain overlap between various commonly used datasets and show that some datasets contain more representative cross-genre samples than others. Along with the dataset analysis, these results might serve as a guide for choosing datasets in future research. Source code and documentation are available at https://github.com/salu133445/muspy . 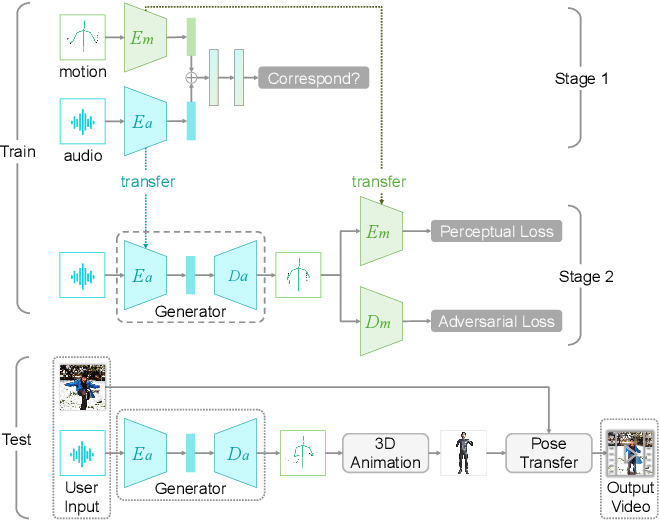 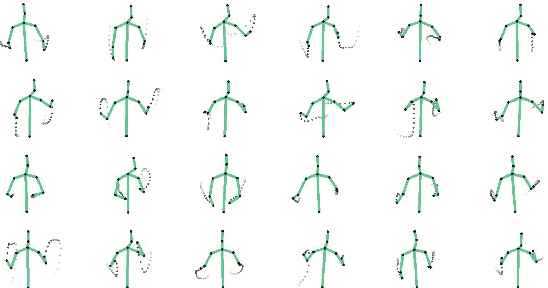 In this demo, we present VirtualConductor, a system that can generate conducting video from any given music and a single user's image. First, a large-scale conductor motion dataset is collected and constructed. Then, we propose Audio Motion Correspondence Network (AMCNet) and adversarial-perceptual learning to learn the cross-modal relationship and generate diverse, plausible, music-synchronized motion. Finally, we combine 3D animation rendering and a pose transfer model to synthesize conducting video from a single given user's image. Therefore, any user can become a virtual conductor through the system.

An ideal music synthesizer should be both interactive and expressive, generating high-fidelity audio in realtime for arbitrary combinations of instruments and notes. Recent neural synthesizers have exhibited a tradeoff between domain-specific models that offer detailed control of only specific instruments, or raw waveform models that can train on all of music but with minimal control and slow generation. In this work, we focus on a middle ground of neural synthesizers that can generate audio from MIDI sequences with arbitrary combinations of instruments in realtime. This enables training on a wide range of transcription datasets with a single model, which in turn offers note-level control of composition and instrumentation across a wide range of instruments. We use a simple two-stage process: MIDI to spectrograms with an encoder-decoder Transformer, then spectrograms to audio with a generative adversarial network (GAN) spectrogram inverter. We compare training the decoder as an autoregressive model and as a Denoising Diffusion Probabilistic Model (DDPM) and find that the DDPM approach is superior both qualitatively and as measured by audio reconstruction and Fr\'echet distance metrics. Given the interactivity and generality of this approach, we find this to be a promising first step towards interactive and expressive neural synthesis for arbitrary combinations of instruments and notes. 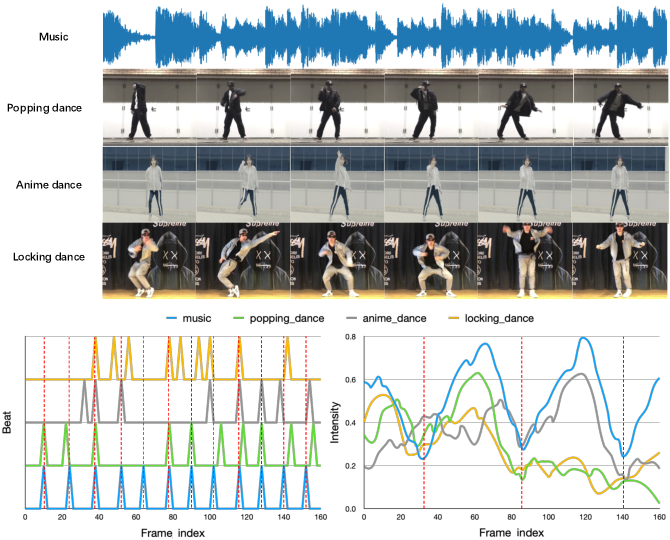 Choreography refers to creation of dance steps and motions for dances according to the latent knowledge in human mind, where the created dance motions are in general style-specific and consistent. So far, such latent style-specific knowledge about dance styles cannot be represented explicitly in human language and has not yet been learned in previous works on music-to-dance generation tasks. In this paper, we propose a novel music-to-dance synthesis framework with controllable style embeddings. These embeddings are learned representations of style-consistent kinematic abstraction of reference dance clips, which act as controllable factors to impose style constraints on dance generation in a latent manner. Thus, the dance styles can be transferred to dance motions by merely modifying the style embeddings. To support this study, we build a large music-to-dance dataset. The qualitative and quantitative evaluations demonstrate the advantage of our proposed framework, as well as the ability of synthesizing diverse styles of dances from identical music via style embeddings. 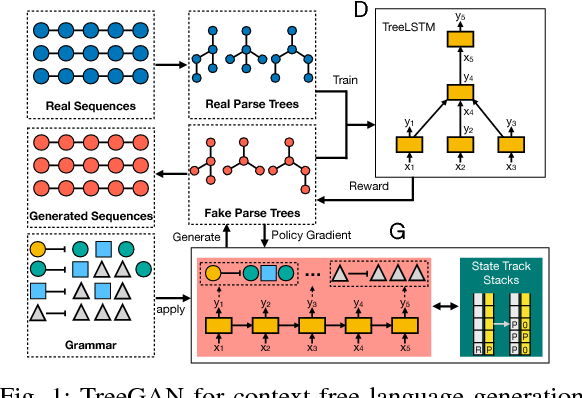 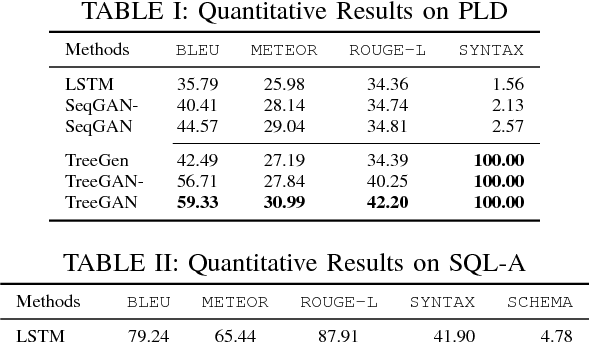 Generative Adversarial Networks (GANs) have shown great capacity on image generation, in which a discriminative model guides the training of a generative model to construct images that resemble real images. Recently, GANs have been extended from generating images to generating sequences (e.g., poems, music and codes). Existing GANs on sequence generation mainly focus on general sequences, which are grammar-free. In many real-world applications, however, we need to generate sequences in a formal language with the constraint of its corresponding grammar. For example, to test the performance of a database, one may want to generate a collection of SQL queries, which are not only similar to the queries of real users, but also follow the SQL syntax of the target database. Generating such sequences is highly challenging because both the generator and discriminator of GANs need to consider the structure of the sequences and the given grammar in the formal language. To address these issues, we study the problem of syntax-aware sequence generation with GANs, in which a collection of real sequences and a set of pre-defined grammatical rules are given to both discriminator and generator. We propose a novel GAN framework, namely TreeGAN, to incorporate a given Context-Free Grammar (CFG) into the sequence generation process. In TreeGAN, the generator employs a recurrent neural network (RNN) to construct a parse tree. Each generated parse tree can then be translated to a valid sequence of the given grammar. The discriminator uses a tree-structured RNN to distinguish the generated trees from real trees. We show that TreeGAN can generate sequences for any CFG and its generation fully conforms with the given syntax. Experiments on synthetic and real data sets demonstrated that TreeGAN significantly improves the quality of the sequence generation in context-free languages. 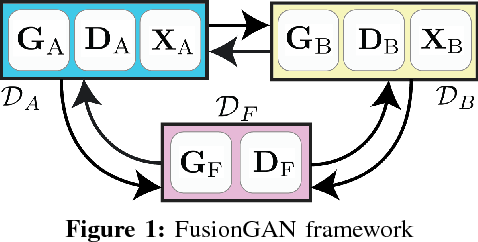 FusionGAN is a novel genre fusion framework for music generation that integrates the strengths of generative adversarial networks and dual learning. In particular, the proposed method offers a dual learning extension that can effectively integrate the styles of the given domains. To efficiently quantify the difference among diverse domains and avoid the vanishing gradient issue, FusionGAN provides a Wasserstein based metric to approximate the distance between the target domain and the existing domains. Adopting the Wasserstein distance, a new domain is created by combining the patterns of the existing domains using adversarial learning. Experimental results on public music datasets demonstrated that our approach could effectively merge two genres. 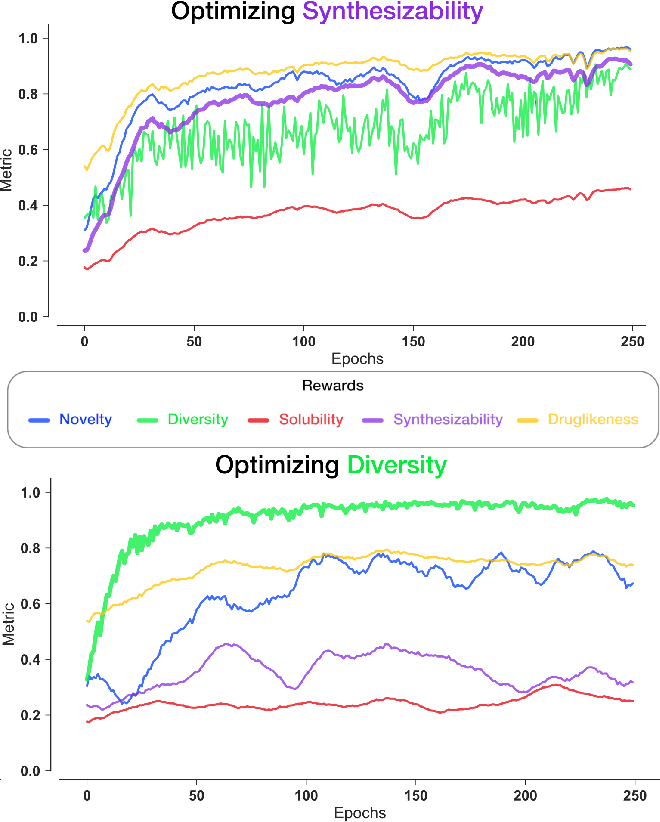 In unsupervised data generation tasks, besides the generation of a sample based on previous observations, one would often like to give hints to the model in order to bias the generation towards desirable metrics. We propose a method that combines Generative Adversarial Networks (GANs) and reinforcement learning (RL) in order to accomplish exactly that. While RL biases the data generation process towards arbitrary metrics, the GAN component of the reward function ensures that the model still remembers information learned from data. We build upon previous results that incorporated GANs and RL in order to generate sequence data and test this model in several settings for the generation of molecules encoded as text sequences (SMILES) and in the context of music generation, showing for each case that we can effectively bias the generation process towards desired metrics. 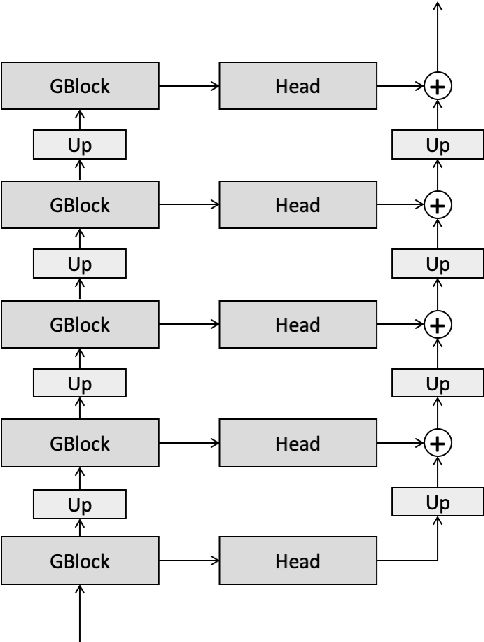 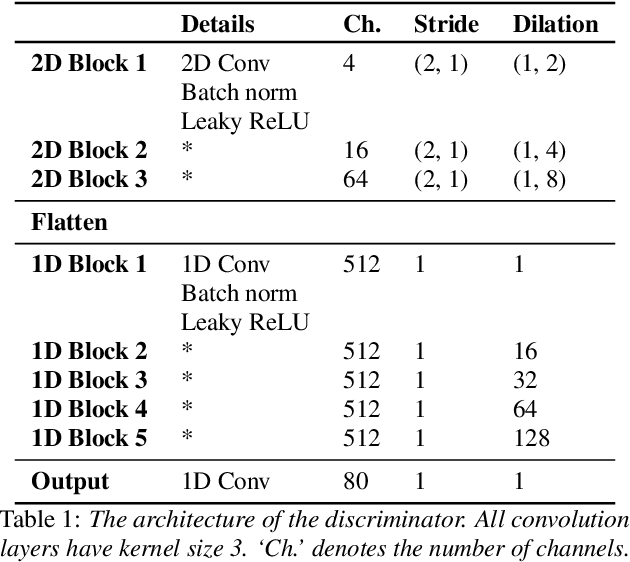 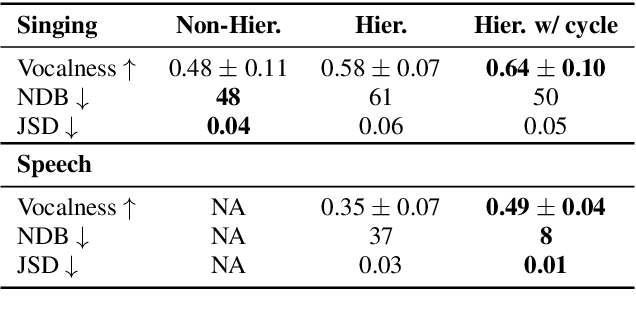 In a recent paper, we have presented a generative adversarial network (GAN)-based model for unconditional generation of the mel-spectrograms of singing voices. As the generator of the model is designed to take a variable-length sequence of noise vectors as input, it can generate mel-spectrograms of variable length. However, our previous listening test shows that the quality of the generated audio leaves room for improvement. The present paper extends and expands that previous work in the following aspects. First, we employ a hierarchical architecture in the generator to induce some structure in the temporal dimension. Second, we introduce a cycle regularization mechanism to the generator to avoid mode collapse. Third, we evaluate the performance of the new model not only for generating singing voices, but also for generating speech voices. Evaluation result shows that new model outperforms the prior one both objectively and subjectively. We also employ the model to unconditionally generate sequences of piano and violin music and find the result promising. Audio examples, as well as the code for implementing our model, will be publicly available online upon paper publication. 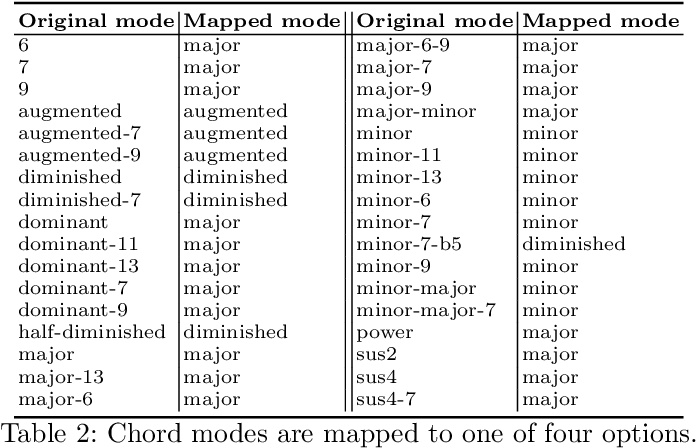 Music that is generated by recurrent neural networks often lacks a sense of direction and coherence. We therefore propose a two-stage LSTM-based model for lead sheet generation, in which the harmonic and rhythmic templates of the song are produced first, after which, in a second stage, a sequence of melody notes is generated conditioned on these templates. A subjective listening test shows that our approach outperforms the baselines and increases perceived musical coherence.