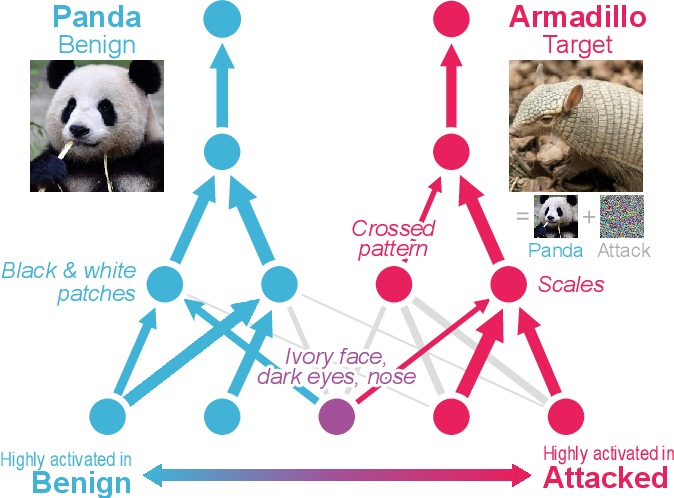 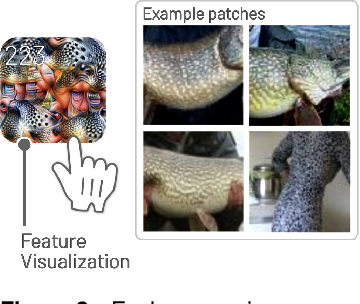 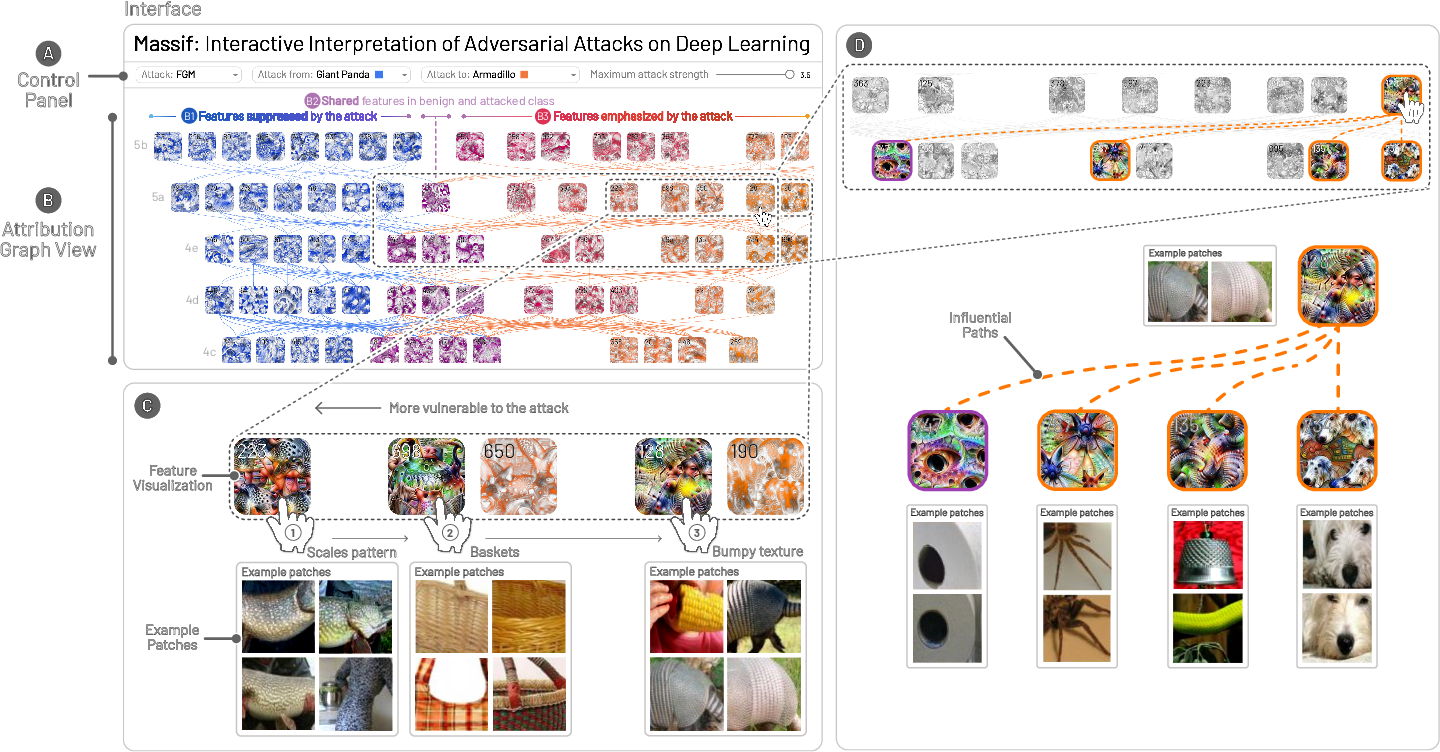 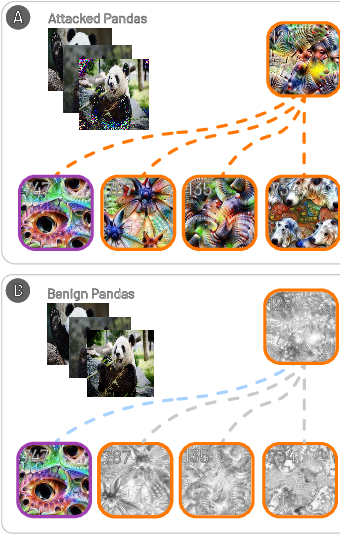 Deep neural networks (DNNs) are increasingly powering high-stakes applications such as autonomous cars and healthcare; however, DNNs are often treated as "black boxes" in such applications. Recent research has also revealed that DNNs are highly vulnerable to adversarial attacks, raising serious concerns over deploying DNNs in the real world. To overcome these deficiencies, we are developing Massif, an interactive tool for deciphering adversarial attacks. Massif identifies and interactively visualizes neurons and their connections inside a DNN that are strongly activated or suppressed by an adversarial attack. Massif provides both a high-level, interpretable overview of the effect of an attack on a DNN, and a low-level, detailed description of the affected neurons. These tightly coupled views in Massif help people better understand which input features are most vulnerable or important for correct predictions. 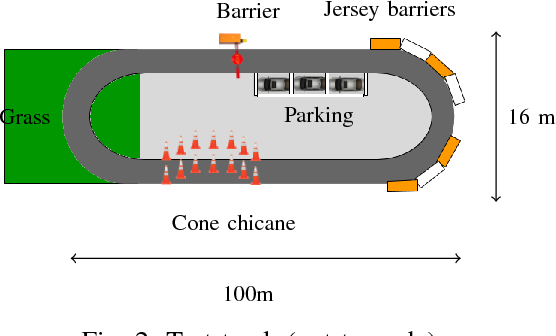 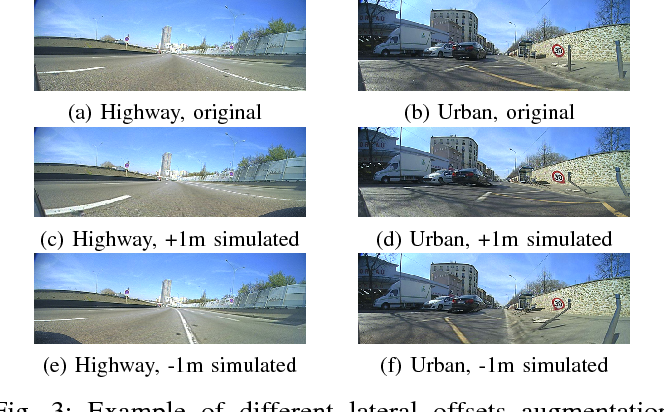 Convolutional neural networks are commonly used to control the steering angle for autonomous cars. Most of the time, multiple long range cameras are used to generate lateral failure cases. In this paper we present a novel model to generate this data and label augmentation using only one short range fisheye camera. We present our simulator and how it can be used as a consistent metric for lateral end-to-end control evaluation. Experiments are conducted on a custom dataset corresponding to more than 10000 km and 200 hours of open road driving. Finally we evaluate this model on real world driving scenarios, open road and a custom test track with challenging obstacle avoidance and sharp turns. In our simulator based on real-world videos, the final model was capable of more than 99% autonomy on urban road 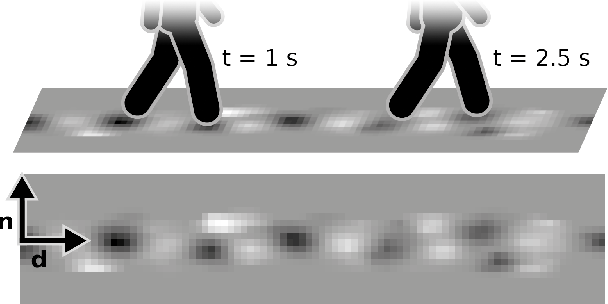 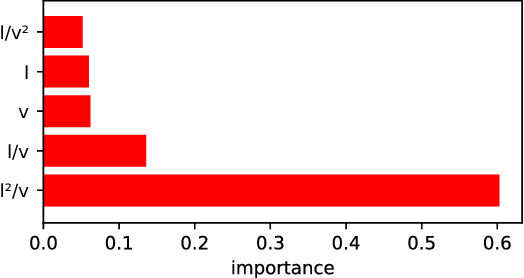 A complete overview of the surrounding vehicle environment is important for driver assistance systems and highly autonomous driving. Fusing results of multiple sensor types like camera, radar and lidar is crucial for increasing the robustness. The detection and classification of objects like cars, bicycles or pedestrians has been analyzed in the past for many sensor types. Beyond that, it is also helpful to refine these classes and distinguish for example between different pedestrian types or activities. This task is usually performed on camera data, though recent developments are based on radar spectrograms. However, for most automotive radar systems, it is only possible to obtain radar targets instead of the original spectrograms. This work demonstrates that it is possible to estimate the body height of walking pedestrians using 2D radar targets. Furthermore, different pedestrian motion types are classified.

It Is Not the Journey but the Destination: Endpoint Conditioned Trajectory Prediction 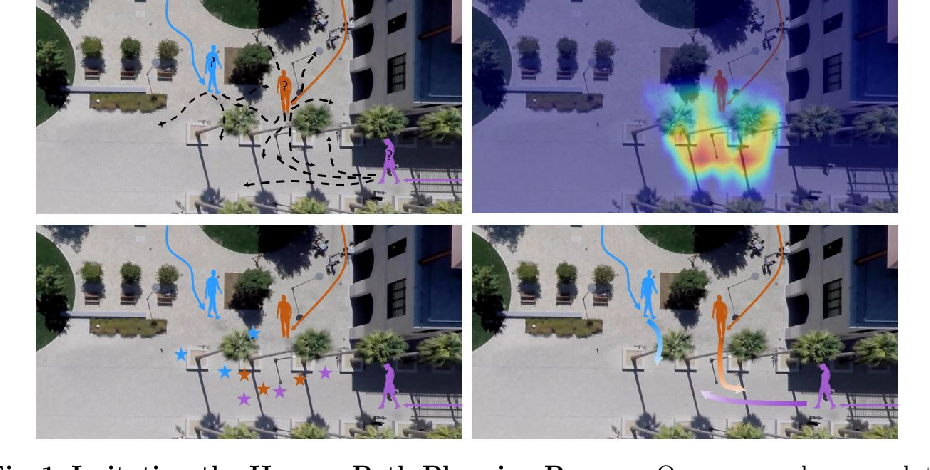 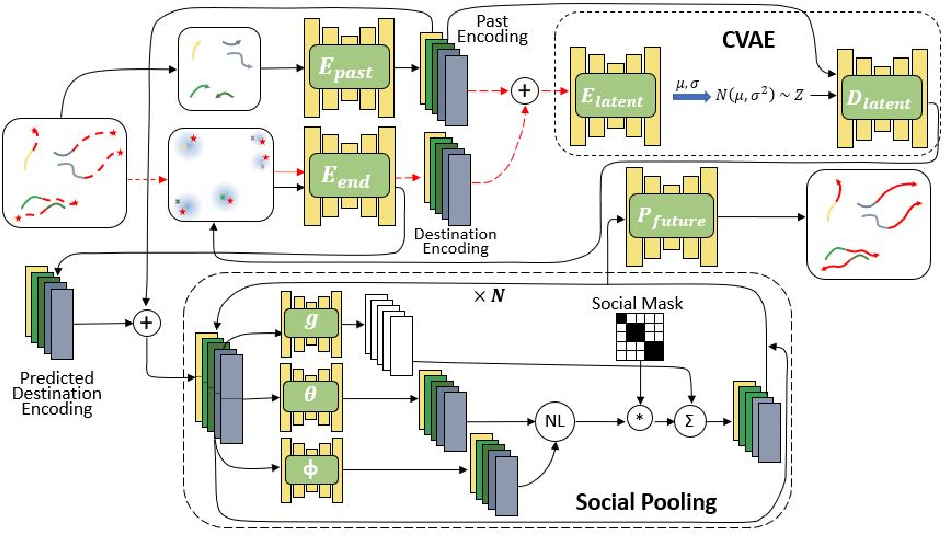 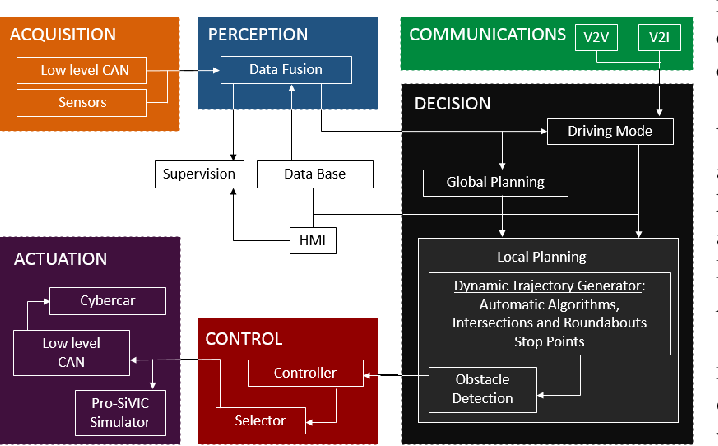 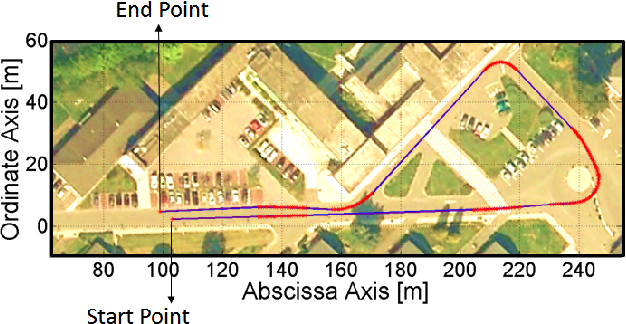 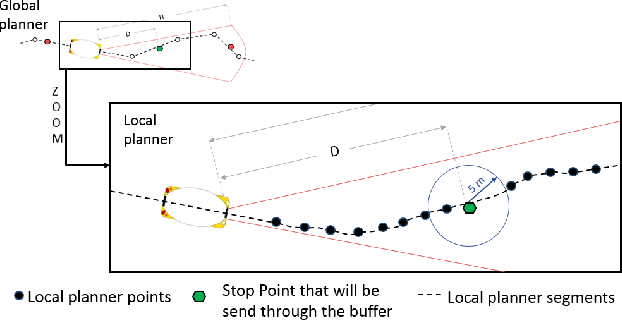 The Cybernetic Transportation Systems (CTS) is an urban mobility concept based on two ideas: the car sharing and the automation of dedicated systems with door-to-door capabilities. In the last decade, many European projects have been developed in this context, where some of the most important are: Cybercars, Cybercars2, CyberMove, CyberC3 and CityMobil. Different companies have developed a first fleet of CTSs in collaboration with research centers around Europe, Asia and America. Considering these previous works, the FP7 project CityMobil2 is on progress since 2012. Its goal is to solve some of the limitations found so far, including the definition of the legal framework for autonomous vehicles on urban environment. This work describes the different improvements, adaptation and instrumentation of the CTS prototypes involved in European cities. Results show tests in our facilities at INRIA-Rocquencourt (France) and the first showcase at Le\'on (Spain) 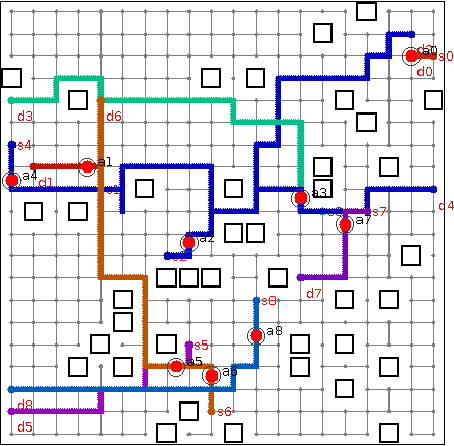 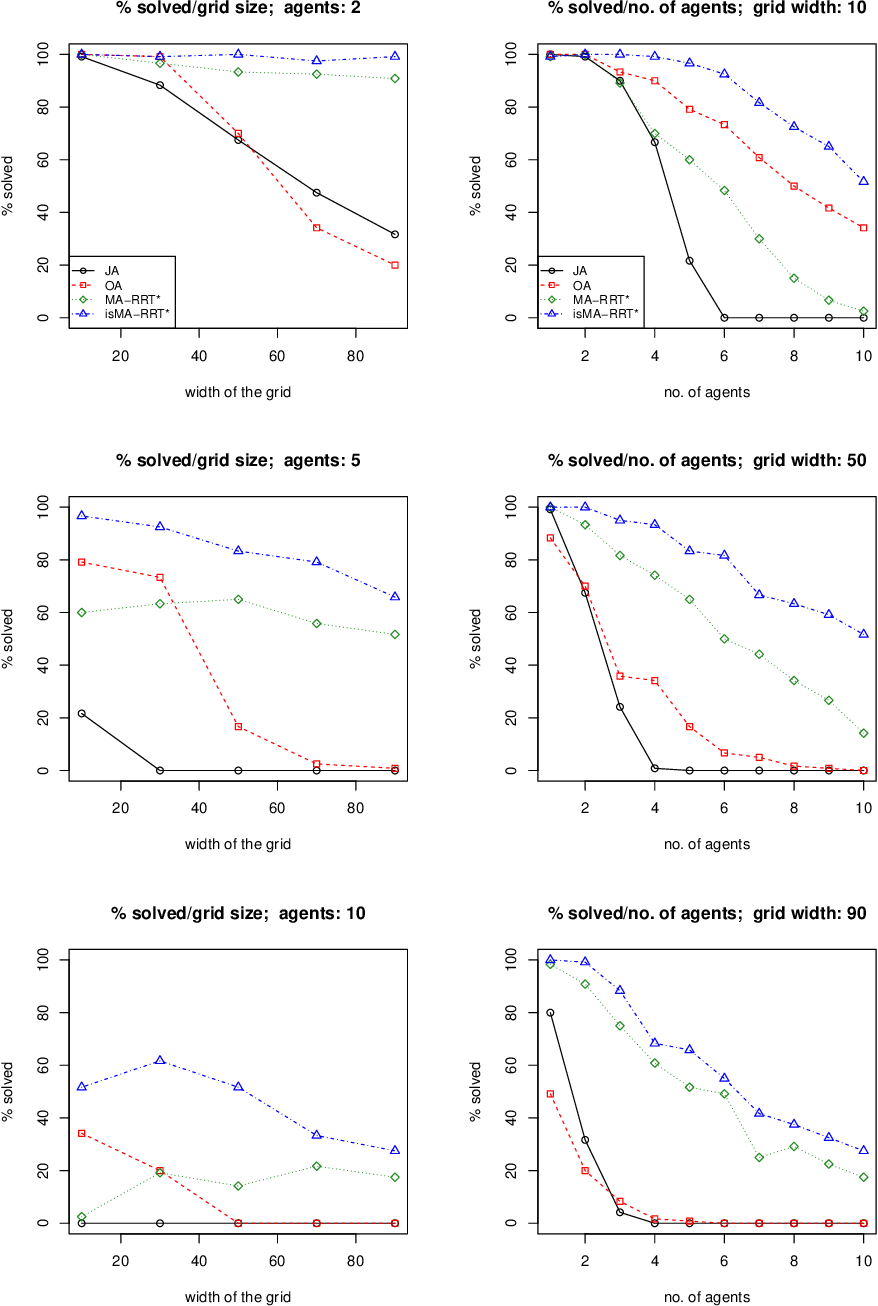 Cooperative pathfinding is a problem of finding a set of non-conflicting trajectories for a number of mobile agents. Its applications include planning for teams of mobile robots, such as autonomous aircrafts, cars, or underwater vehicles. The state-of-the-art algorithms for cooperative pathfinding typically rely on some heuristic forward-search pathfinding technique, where A* is often the algorithm of choice. Here, we propose MA-RRT*, a novel algorithm for multi-agent path planning that builds upon a recently proposed asymptotically-optimal sampling-based algorithm for finding single-agent shortest path called RRT*. We experimentally evaluate the performance of the algorithm and show that the sampling-based approach offers better scalability than the classical forward-search approach in relatively large, but sparse environments, which are typical in real-world applications such as multi-aircraft collision avoidance. 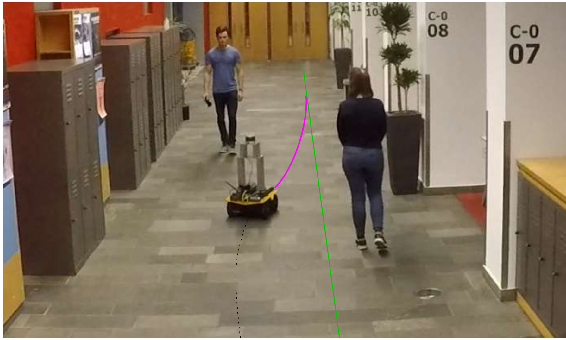 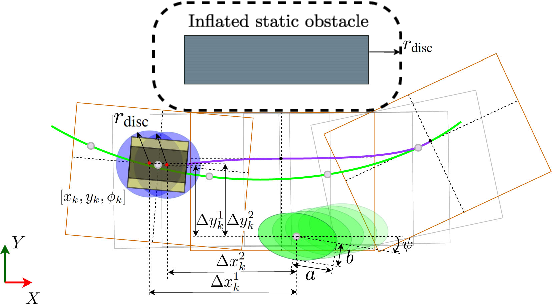 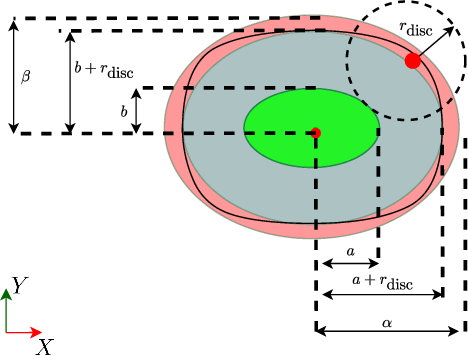 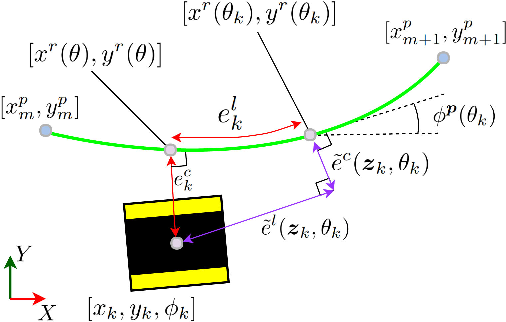 This paper presents a method for local motion planning in unstructured environments with static and moving obstacles, such as humans. Given a reference path and speed, our optimization-based receding-horizon approach computes a local trajectory that minimizes the tracking error while avoiding obstacles. We build on nonlinear model-predictive contouring control (MPCC) and extend it to incorporate a static map by computing, online, a set of convex regions in free space. We model moving obstacles as ellipsoids and provide a correct bound to approximate the collision region, given by the Minkowsky sum of an ellipse and a circle. Our framework is agnostic to the robot model. We present experimental results with a mobile robot navigating in indoor environments populated with humans. Our method is executed fully onboard without the need of external support and can be applied to other robot morphologies such as autonomous cars.

In motion planning problems for autonomous robots, such as self-driving cars, the robot must ensure that its planned path is not in close proximity to obstacles in the environment. However, the problem of evaluating the proximity is generally non-convex and serves as a significant computational bottleneck for motion planning algorithms. In this paper, we present methods for a general class of absolutely continuous parametric curves to compute: (i) the minimum separating distance, (ii) tolerance verification, and (iii) collision detection. Our methods efficiently compute bounds on obstacle proximity by bounding the curve in a convex region. This bound is based on an upper bound on the curve arc length that can be expressed in closed form for a useful class of parametric curves including curves with trigonometric or polynomial bases. We demonstrate the computational efficiency and accuracy of our approach through numerical simulations of several proximity problems. 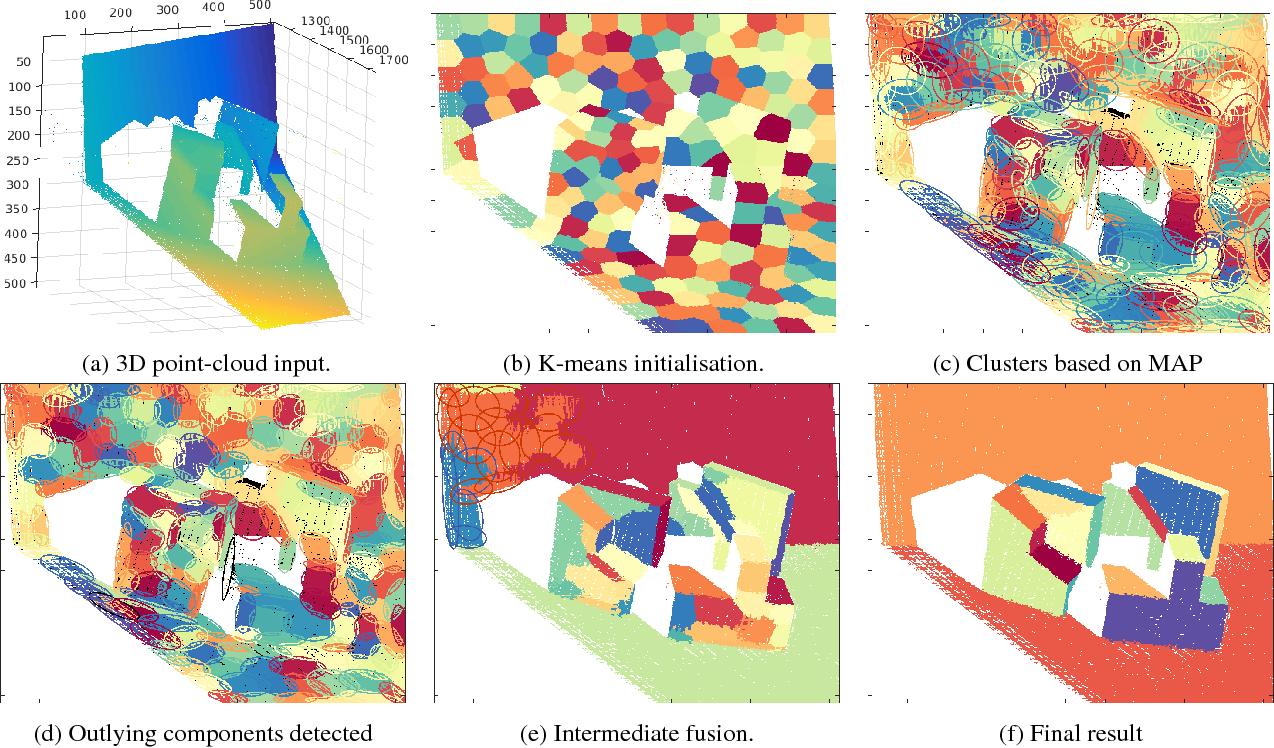 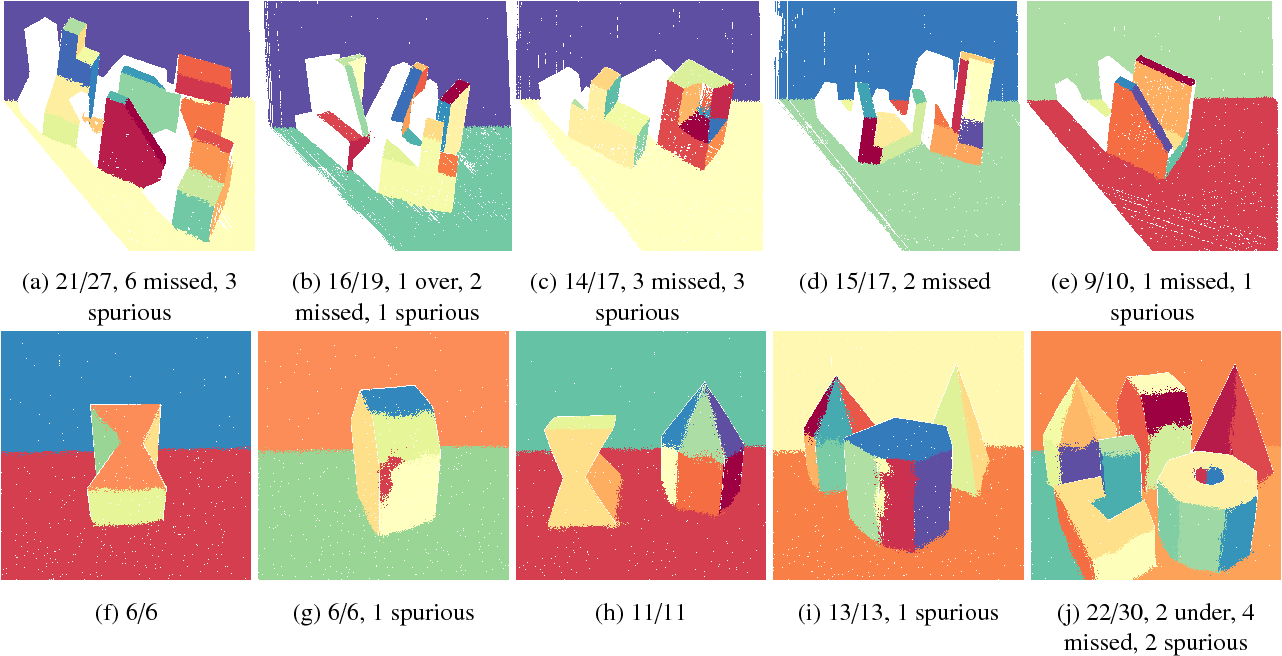 We propose a novel algorithm for unsupervised extraction of piecewise planar models from depth-data. Among other applications, such models are a good way of enabling autonomous agents (robots, cars, drones, etc.) to effectively perceive their surroundings and to navigate in three dimensions. We propose to do this by fitting the data with a piecewise-linear Gaussian mixture regression model whose components are skewed over planes, making them flat in appearance rather than being ellipsoidal, by embedding an outlier-trimming process that is formally incorporated into the proposed expectation-maximization algorithm, and by selectively fusing contiguous, coplanar components. Part of our motivation is an attempt to estimate more accurate plane-extraction by allowing each model component to make use of all available data through probabilistic clustering. The algorithm is thoroughly evaluated against a standard benchmark and is shown to rank among the best of the existing state-of-the-art methods.