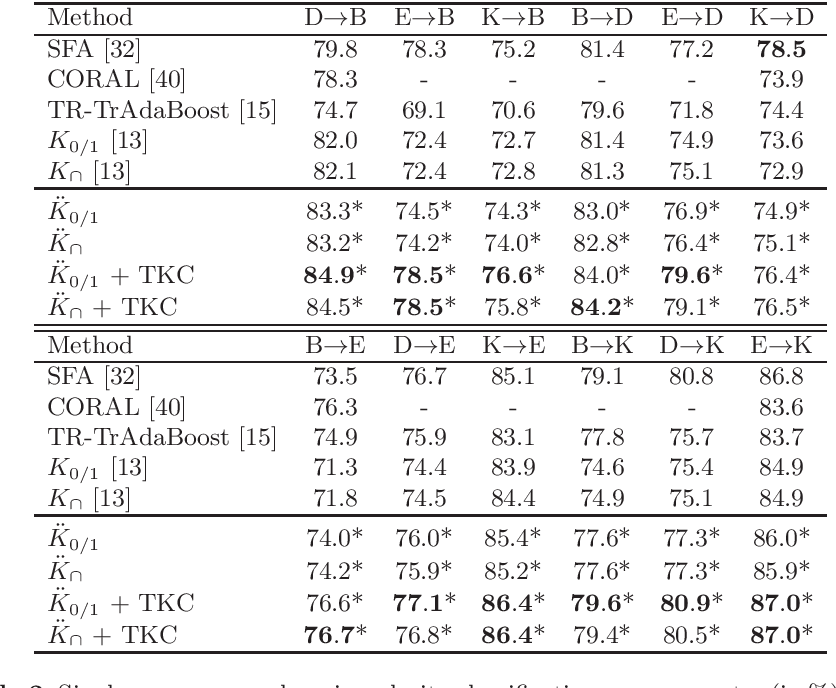 For many text classification tasks, there is a major problem posed by the lack of labeled data in a target domain. Although classifiers for a target domain can be trained on labeled text data from a related source domain, the accuracy of such classifiers is usually lower in the cross-domain setting. Recently, string kernels have obtained state-of-the-art results in various text classification tasks such as native language identification or automatic essay scoring. Moreover, classifiers based on string kernels have been found to be robust to the distribution gap between different domains. In this paper, we formally describe an algorithm composed of two simple yet effective transductive learning approaches to further improve the results of string kernels in cross-domain settings. By adapting string kernels to the test set without using the ground-truth test labels, we report significantly better accuracy rates in cross-domain English polarity classification.

Neural Text Classification by Jointly Learning to Cluster and Align 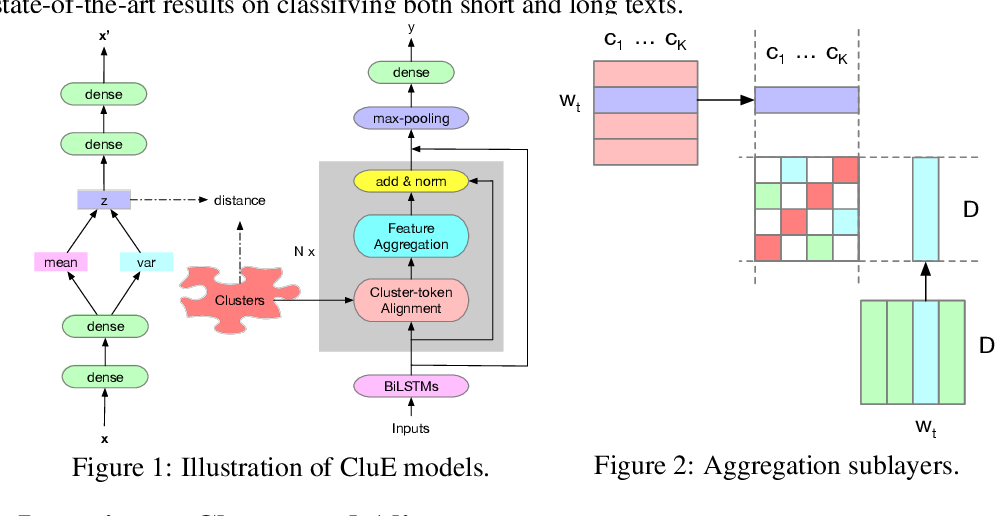 Distributional text clustering delivers semantically informative representations and captures the relevance between each word and semantic clustering centroids. We extend the neural text clustering approach to text classification tasks by inducing cluster centers via a latent variable model and interacting with distributional word embeddings, to enrich the representation of tokens and measure the relatedness between tokens and each learnable cluster centroid. The proposed method jointly learns word clustering centroids and clustering-token alignments, achieving the state of the art results on multiple benchmark datasets and proving that the proposed cluster-token alignment mechanism is indeed favorable to text classification. Notably, our qualitative analysis has conspicuously illustrated that text representations learned by the proposed model are in accord well with our intuition. 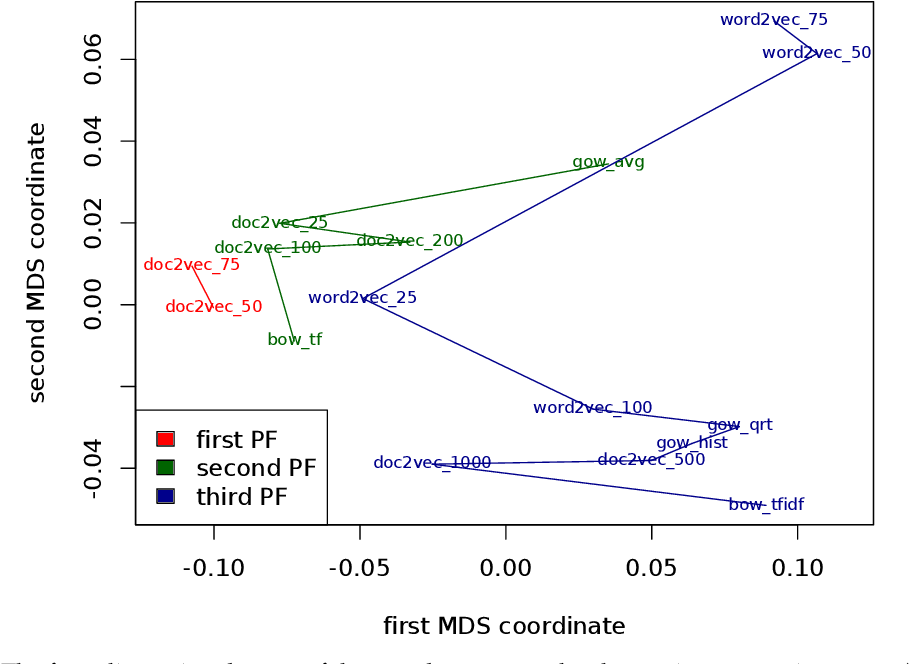 In this paper we perform a comparative analysis of three models for feature representation of text documents in the context of document classification. In particular, we consider the most often used family of models bag-of-words, recently proposed continuous space models word2vec and doc2vec, and the model based on the representation of text documents as language networks. While the bag-of-word models have been extensively used for the document classification task, the performance of the other two models for the same task have not been well understood. This is especially true for the network-based model that have been rarely considered for representation of text documents for classification. In this study, we measure the performance of the document classifiers trained using the method of random forests for features generated the three models and their variants. The results of the empirical comparison show that the commonly used bag-of-words model has performance comparable to the one obtained by the emerging continuous-space model of doc2vec. In particular, the low-dimensional variants of doc2vec generating up to 75 features are among the top-performing document representation models. The results finally point out that doc2vec shows a superior performance in the tasks of classifying large documents.

Text Classification based on Word Subspace with Term-Frequency 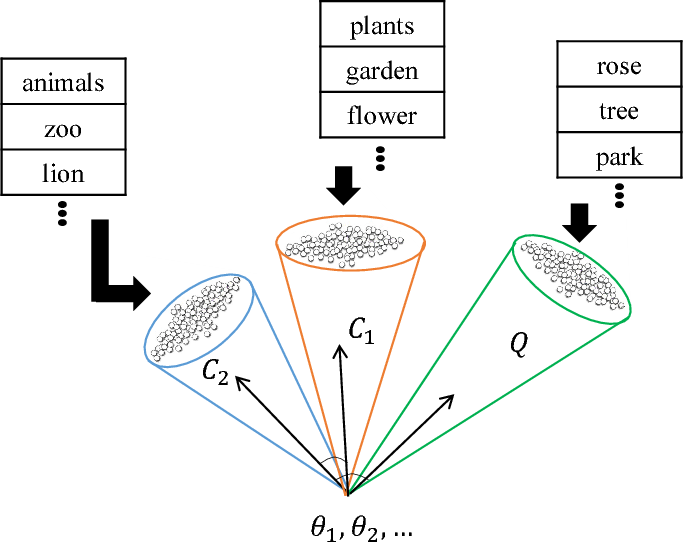 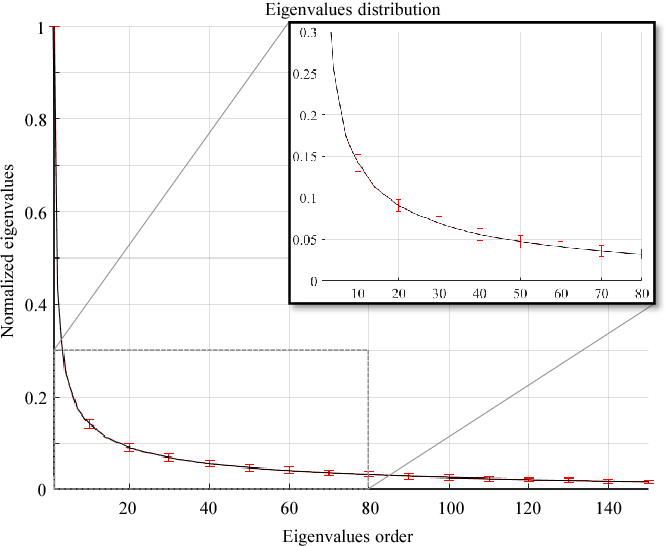 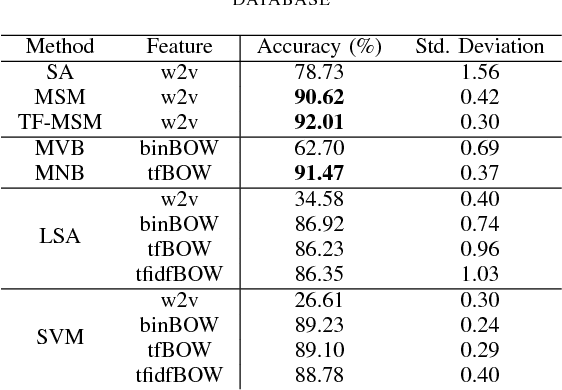 Text classification has become indispensable due to the rapid increase of text in digital form. Over the past three decades, efforts have been made to approach this task using various learning algorithms and statistical models based on bag-of-words (BOW) features. Despite its simple implementation, BOW features lack semantic meaning representation. To solve this problem, neural networks started to be employed to learn word vectors, such as the word2vec. Word2vec embeds word semantic structure into vectors, where the angle between vectors indicates the meaningful similarity between words. To measure the similarity between texts, we propose the novel concept of word subspace, which can represent the intrinsic variability of features in a set of word vectors. Through this concept, it is possible to model text from word vectors while holding semantic information. To incorporate the word frequency directly in the subspace model, we further extend the word subspace to the term-frequency (TF) weighted word subspace. Based on these new concepts, text classification can be performed under the mutual subspace method (MSM) framework. The validity of our modeling is shown through experiments on the Reuters text database, comparing the results to various state-of-art algorithms.


* Accepted at the International Joint Conference on Neural Networks, IJCNN, 2018 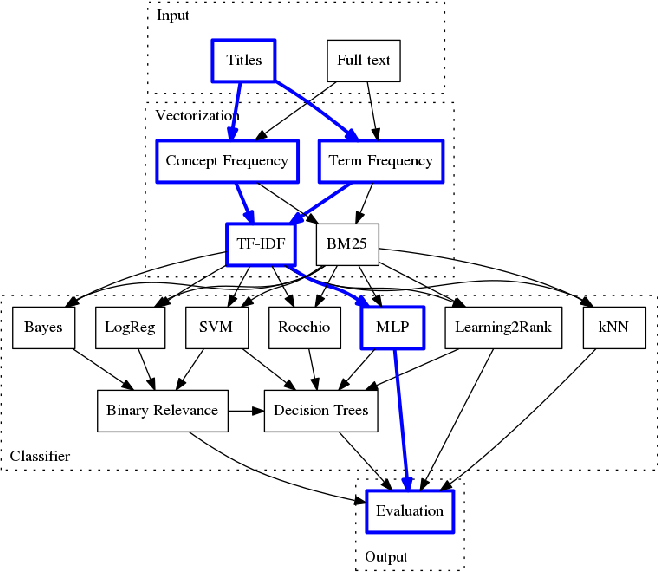 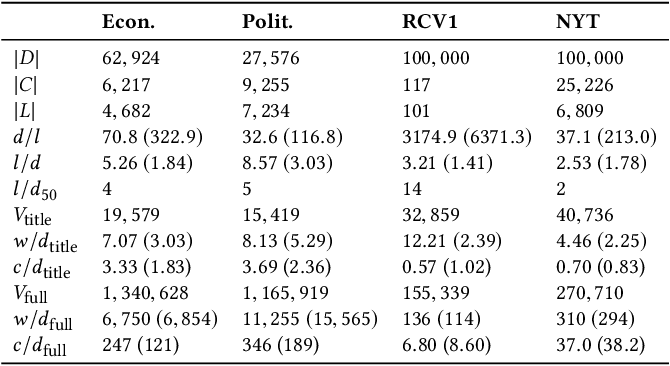 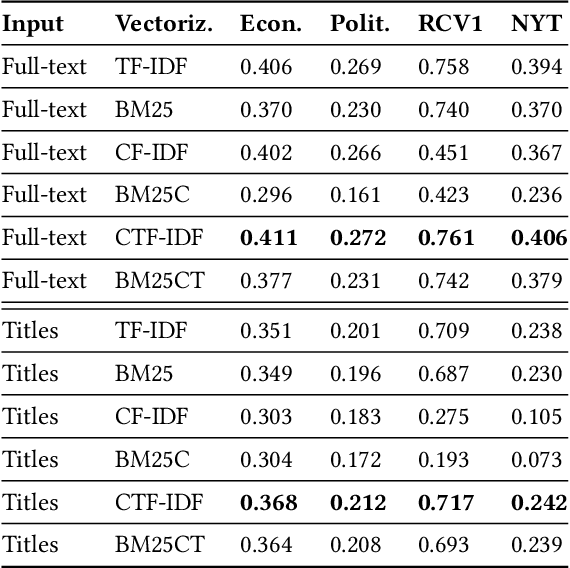 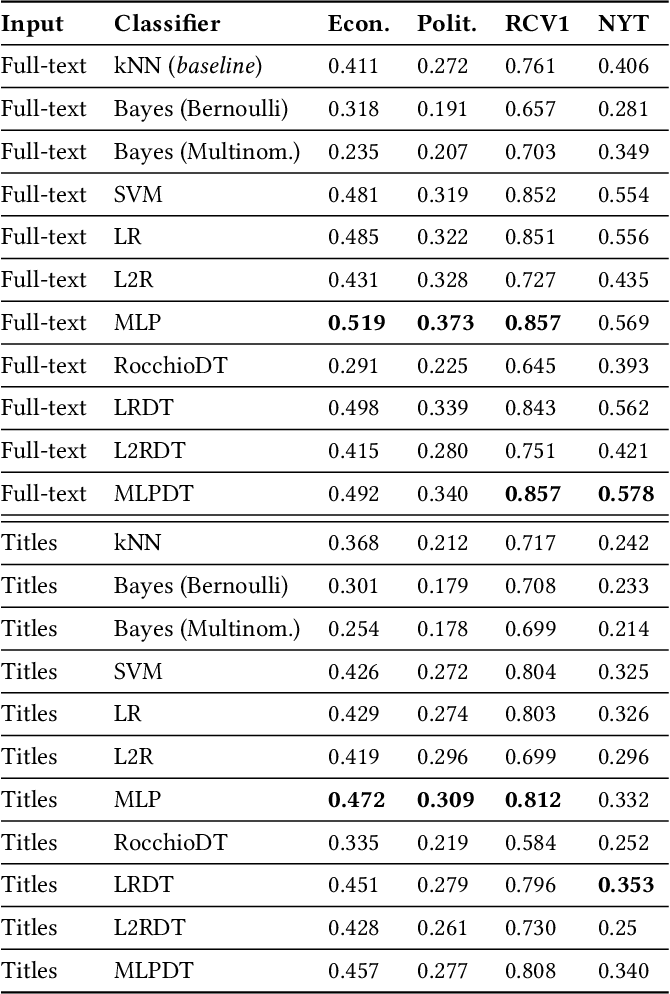 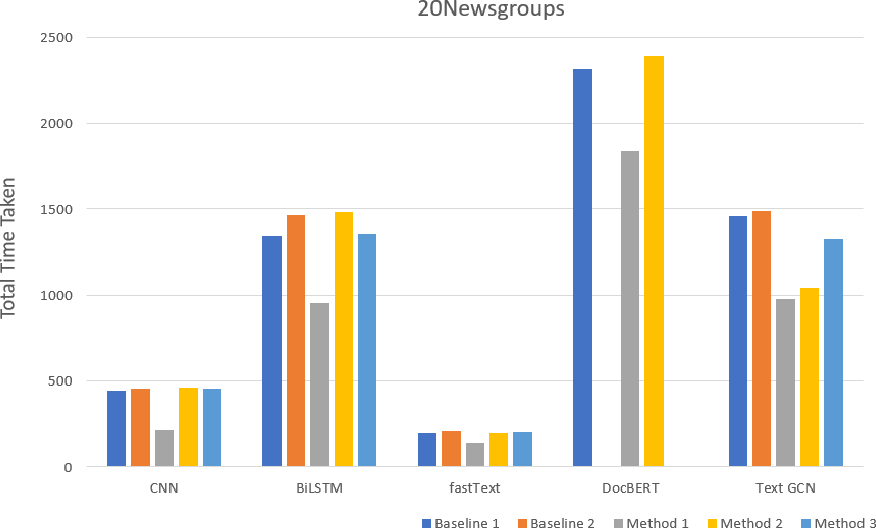 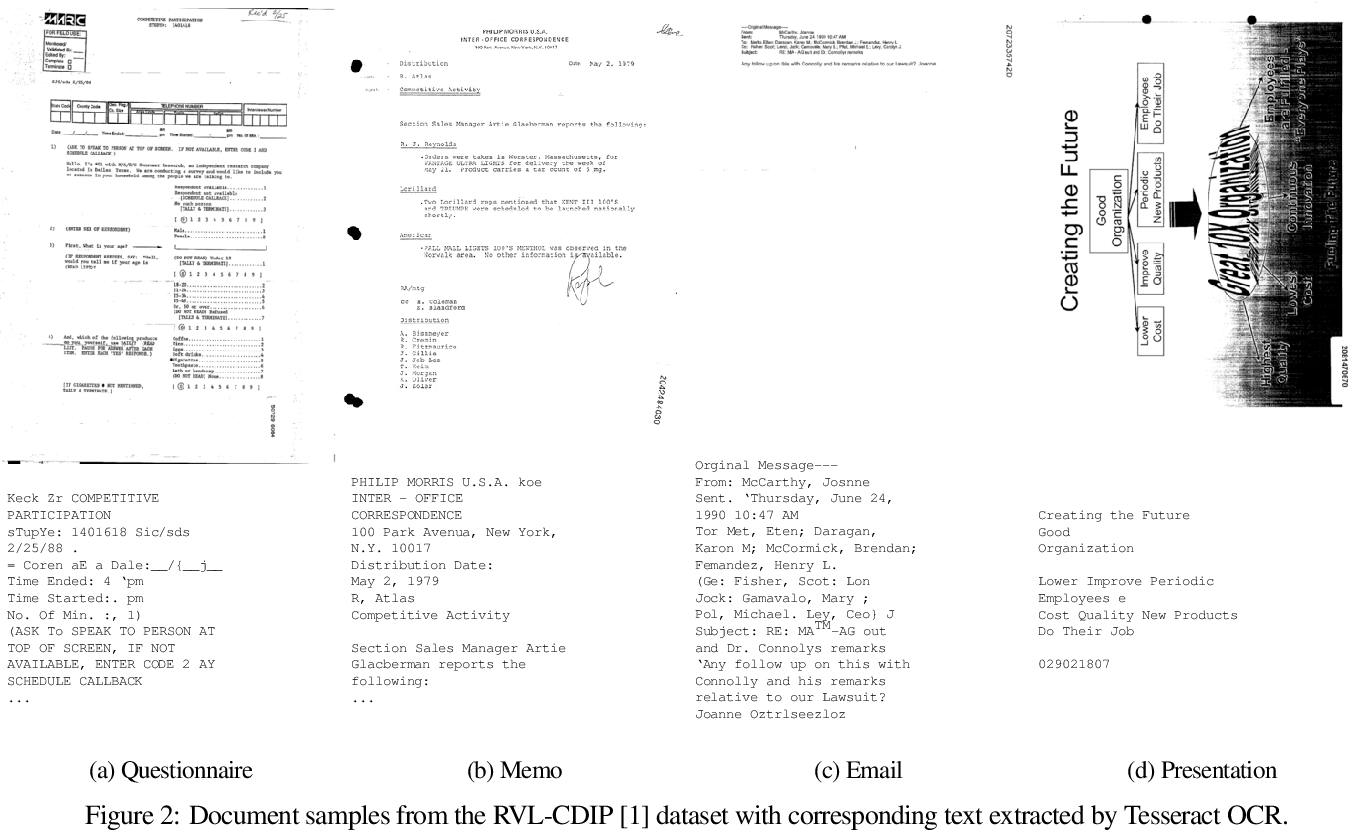 Classification of document images is a critical step for archival of old manuscripts, online subscription and administrative procedures. Computer vision and deep learning have been suggested as a first solution to classify documents based on their visual appearance. However, achieving the fine-grained classification that is required in real-world setting cannot be achieved by visual analysis alone. Often, the relevant information is in the actual text content of the document. We design a multimodal neural network that is able to learn from word embeddings, computed on text extracted by OCR, and from the image. We show that this approach boosts pure image accuracy by 3% on Tobacco3482 and RVL-CDIP augmented by our new QS-OCR text dataset (https://github.com/Quicksign/ocrized-text-dataset), even without clean text information. 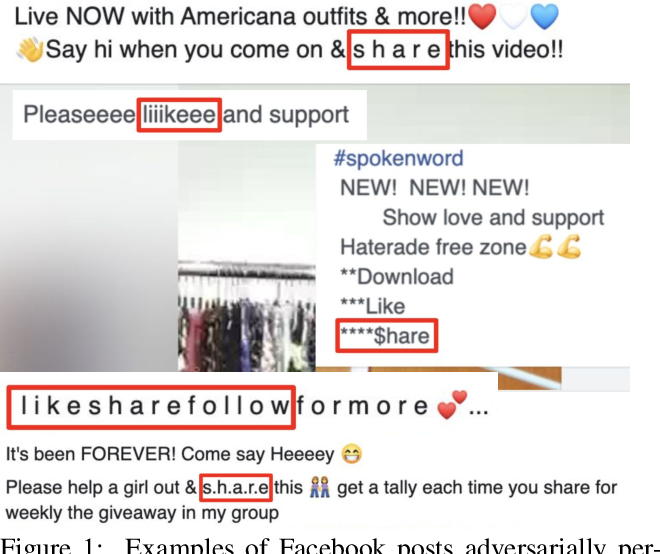 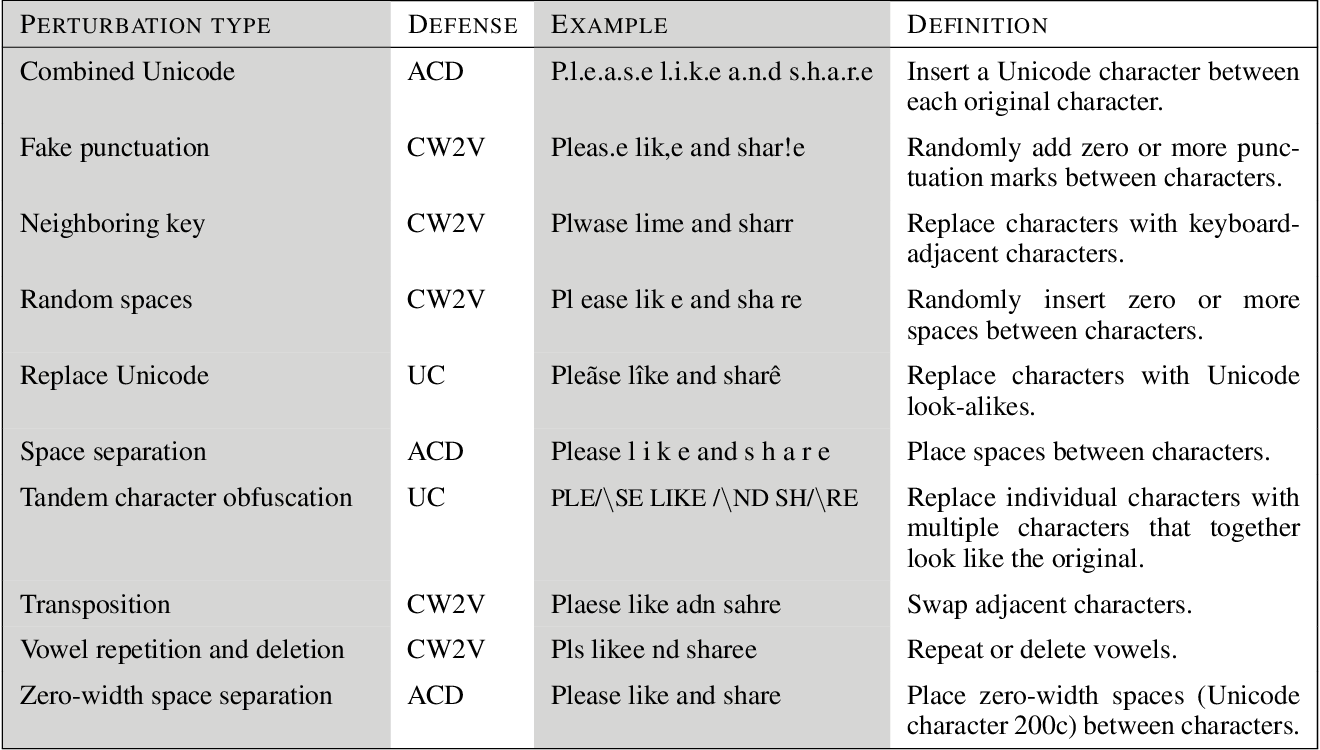 Social networks have become an indispensable part of our lives, with billions of people producing ever-increasing amounts of text. At such scales, content policies and their enforcement become paramount. To automate moderation, questionable content is detected by Natural Language Processing (NLP) classifiers. However, high-performance classifiers are hampered by misspellings and adversarial text perturbations. In this paper, we classify intentional and unintentional adversarial text perturbation into ten types and propose a deobfuscation pipeline to make NLP models robust to such perturbations. We propose Continuous Word2Vec (CW2V), our data-driven method to learn word embeddings that ensures that perturbations of words have embeddings similar to those of the original words. We show that CW2V embeddings are generally more robust to text perturbations than embeddings based on character ngrams. Our robust classification pipeline combines deobfuscation and classification, using proposed defense methods and word embeddings to classify whether Facebook posts are requesting engagement such as likes. Our pipeline results in engagement bait classification that goes from 0.70 to 0.67 AUC with adversarial text perturbation, while character ngram-based word embedding methods result in downstream classification that goes from 0.76 to 0.64. 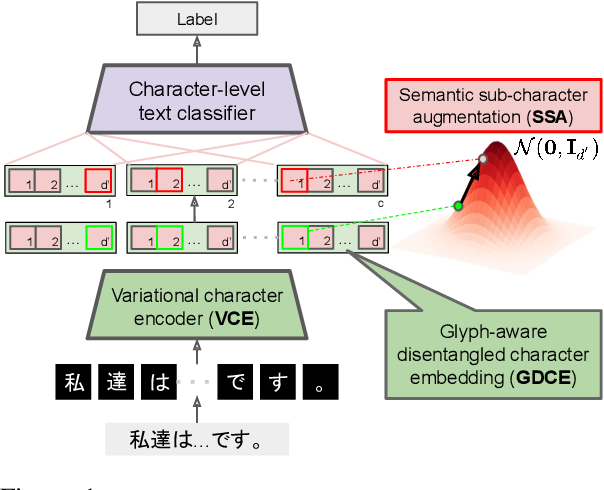 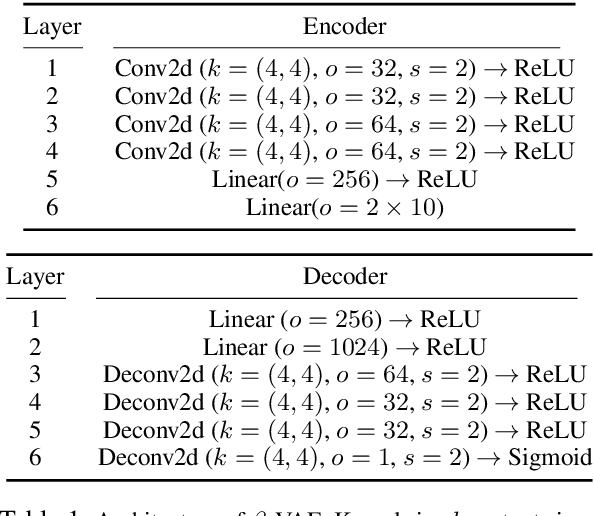 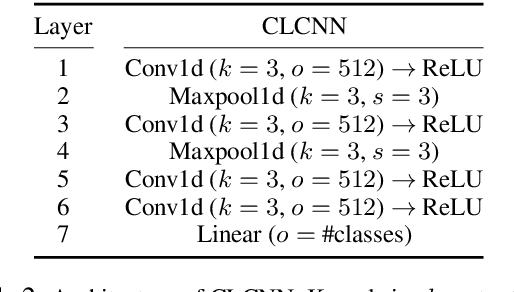 We propose a new character-based text classification framework for non-alphabetic languages, such as Chinese and Japanese. Our framework consists of a variational character encoder (VCE) and character-level text classifier. The VCE is composed of a $\beta$-variational auto-encoder ($\beta$-VAE) that learns the proposed glyph-aware disentangled character embedding (GDCE). Since our GDCE provides zero-mean unit-variance character embeddings that are dimensionally independent, it is applicable for our interpretable data augmentation, namely, semantic sub-character augmentation (SSA). In this paper, we evaluated our framework using Japanese text classification tasks at the document- and sentence-level. We confirmed that our GDCE and SSA not only provided embedding interpretability but also improved the classification performance. Our proposal achieved a competitive result to the state-of-the-art model while also providing model interpretability. Our code is available on https://github.com/IyatomiLab/GDCE-SSA 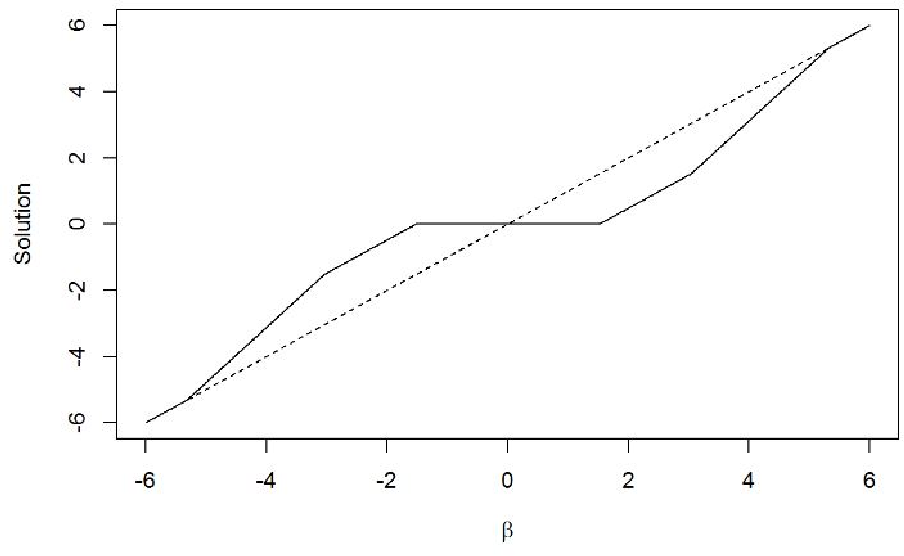 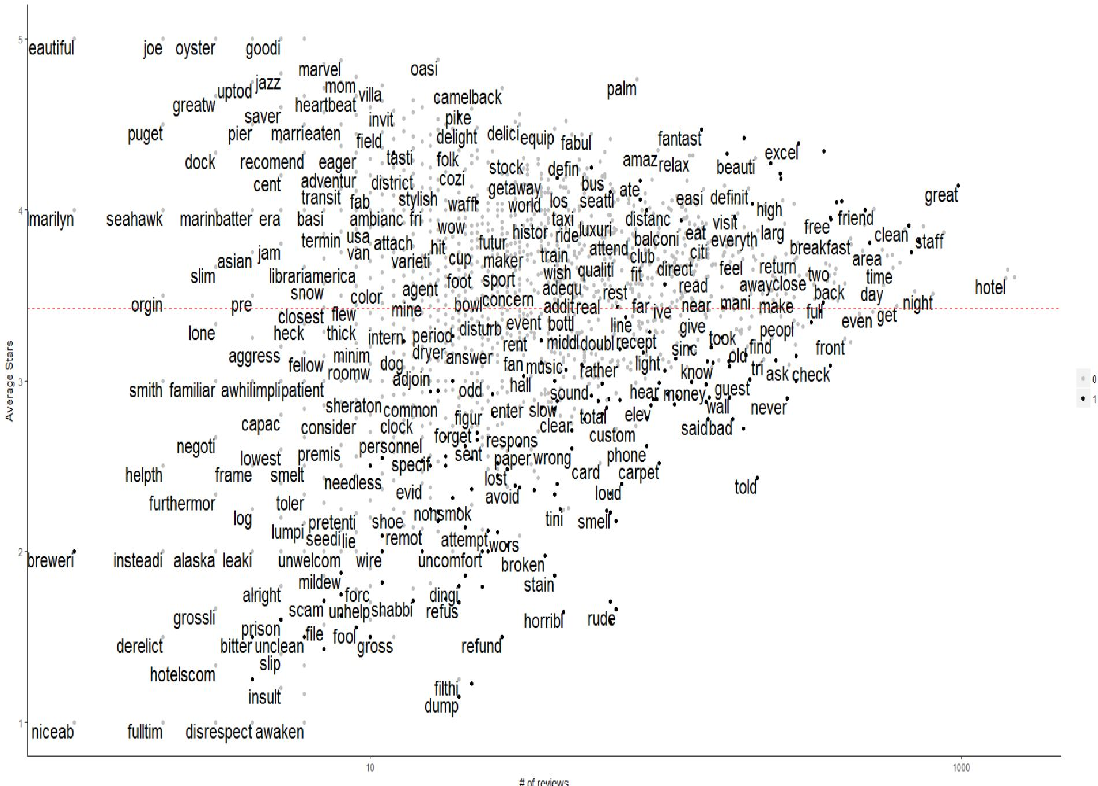 Online customer reviews have become important for managers and executives in the hospitality and catering industry who wish to obtain a comprehensive understanding of their customers' demands and expectations. We propose a Regularized Text Logistic (RTL) regression model to perform text analytics and sentiment classification on unstructured text data, which automatically identifies a set of statistically significant and operationally insightful word features, and achieves satisfactory predictive classification accuracy. We apply the RTL model to two online review datasets, Restaurant and Hotel, from TripAdvisor. Our results demonstrate satisfactory classification performance compared with alternative classifiers with a highest true positive rate of 94.9%. Moreover, RTL identifies a small set of word features, corresponding to 3% for Restaurant and 20% for Hotel, which boosts working efficiency by allowing managers to drill down into a much smaller set of important customer reviews. We also develop the consistency, sparsity and oracle property of the estimator.