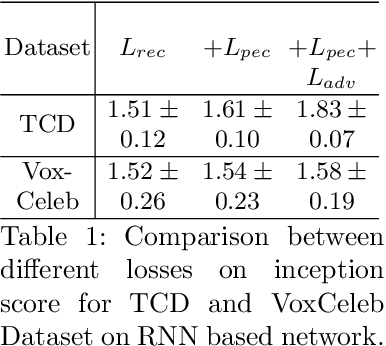 Given an arbitrary face image and an arbitrary speech clip, the proposed work attempts to generating the talking face video with accurate lip synchronization while maintaining smooth transition of both lip and facial movement over the entire video clip. Existing works either do not consider temporal dependency on face images across different video frames thus easily yielding noticeable/abrupt facial and lip movement or are only limited to the generation of talking face video for a specific person thus lacking generalization capacity. We propose a novel conditional video generation network where the audio input is treated as a condition for the recurrent adversarial network such that temporal dependency is incorporated to realize smooth transition for the lip and facial movement. In addition, we deploy a multi-task adversarial training scheme in the context of video generation to improve both photo-realism and the accuracy for lip synchronization. Finally, based on the phoneme distribution information extracted from the audio clip, we develop a sample selection method that effectively reduces the size of the training dataset without sacrificing the quality of the generated video. Extensive experiments on both controlled and uncontrolled datasets demonstrate the superiority of the proposed approach in terms of visual quality, lip sync accuracy, and smooth transition of lip and facial movement, as compared to the state-of-the-art. 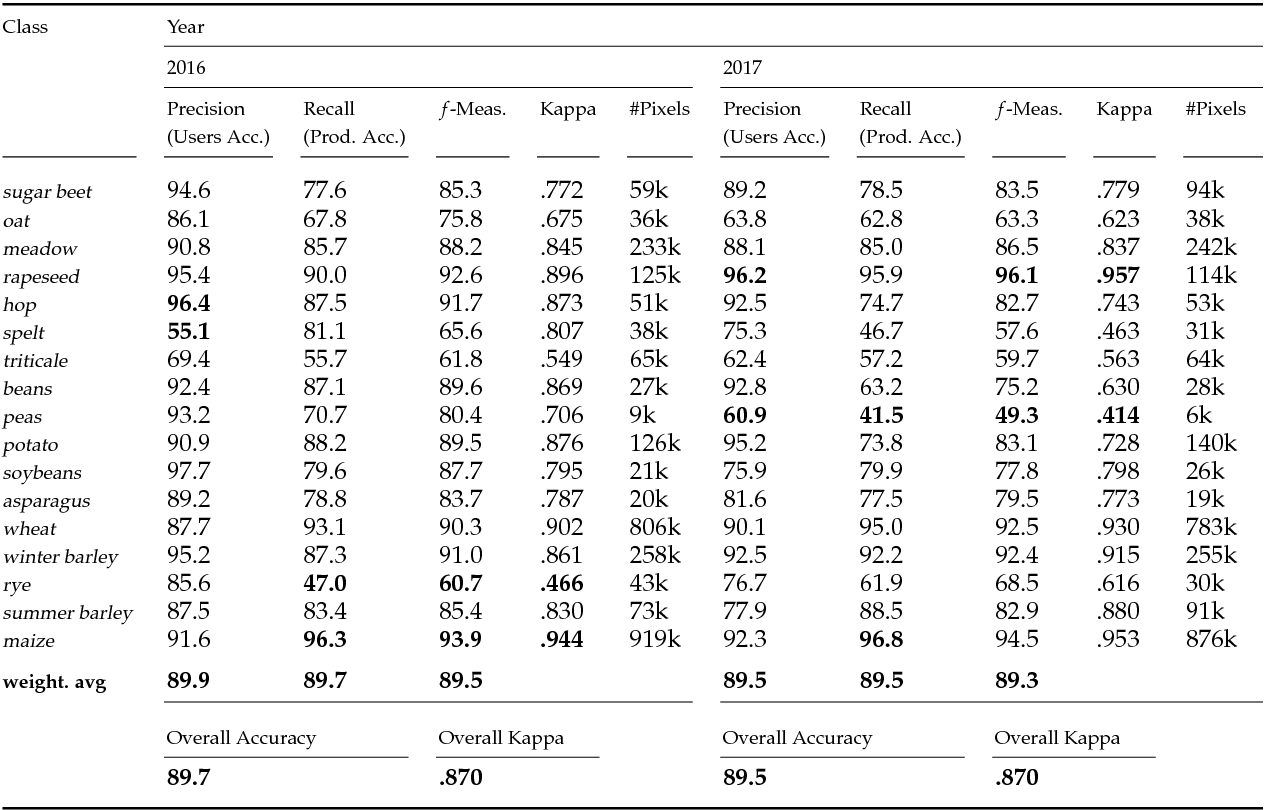 Earth observation (EO) sensors deliver data with daily or weekly temporal resolution. Most land use and land cover (LULC) approaches, however, expect cloud-free and mono-temporal observations. The increasing temporal capabilities of today's sensors enables the use of temporal, along with spectral and spatial features. Domains, such as speech recognition or neural machine translation, work with inherently temporal data and, today, achieve impressive results using sequential encoder-decoder structures. Inspired by these sequence-to-sequence models, we adapt an encoder structure with convolutional recurrent layers in order to approximate a phenological model for vegetation classes based on a temporal sequence of Sentinel 2 (S2) images. In our experiments, we visualize internal activations over a sequence of cloudy and non-cloudy images and find several recurrent cells, which reduce the input activity for cloudy observations. Hence, we assume that our network has learned cloud-filtering schemes solely from input data, which could alleviate the need for tedious cloud-filtering as a preprocessing step for many EO approaches. Moreover, using unfiltered temporal series of top-of-atmosphere (TOA) reflectance data, we achieved in our experiments state-of-the-art classification accuracies on a large number of crop classes with minimal preprocessing compared to other classification approaches. 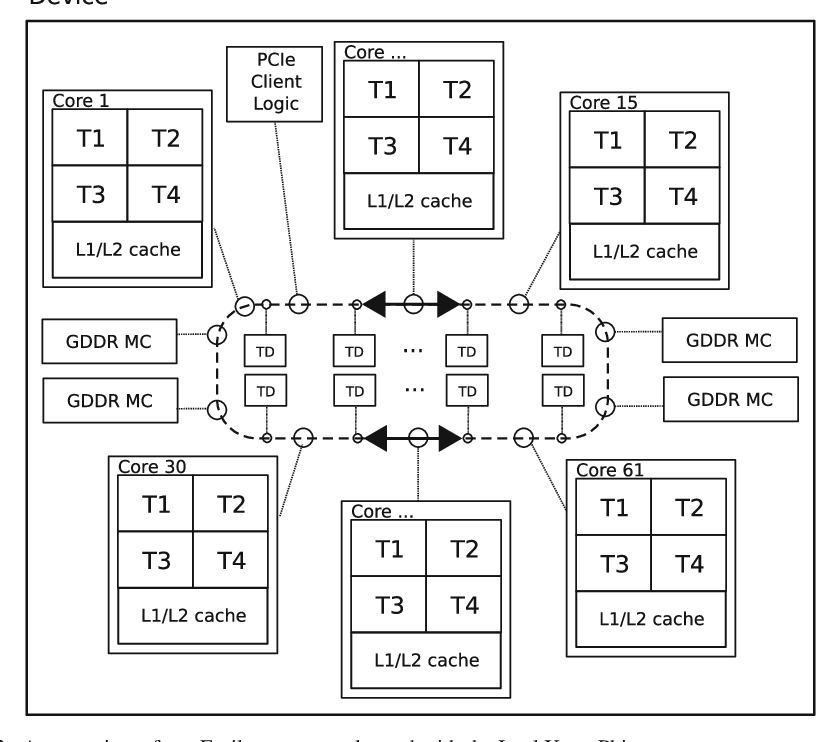 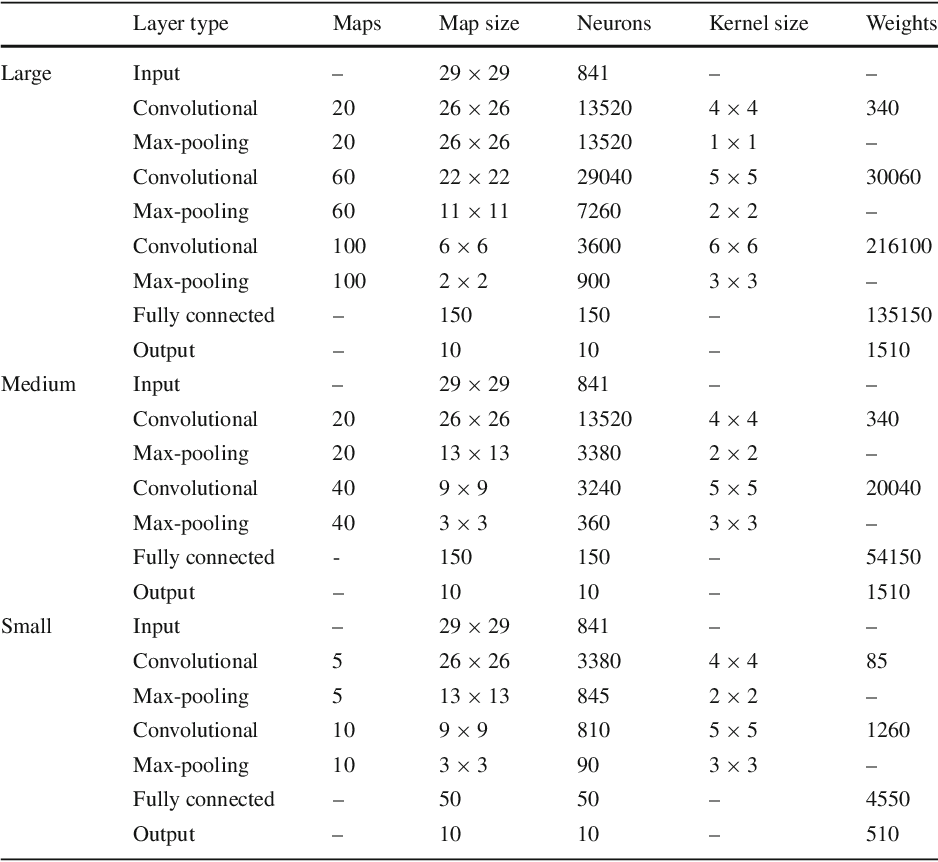 Deep learning is an important component of big-data analytic tools and intelligent applications, such as, self-driving cars, computer vision, speech recognition, or precision medicine. However, the training process is computationally intensive, and often requires a large amount of time if performed sequentially. Modern parallel computing systems provide the capability to reduce the required training time of deep neural networks. In this paper, we present our parallelization scheme for training convolutional neural networks (CNN) named Controlled Hogwild with Arbitrary Order of Synchronization (CHAOS). Major features of CHAOS include the support for thread and vector parallelism, non-instant updates of weight parameters during back-propagation without a significant delay, and implicit synchronization in arbitrary order. CHAOS is tailored for parallel computing systems that are accelerated with the Intel Xeon Phi. We evaluate our parallelization approach empirically using measurement techniques and performance modeling for various numbers of threads and CNN architectures. Experimental results for the MNIST dataset of handwritten digits using the total number of threads on the Xeon Phi show speedups of up to 103x compared to the execution on one thread of the Xeon Phi, 14x compared to the sequential execution on Intel Xeon E5, and 58x compared to the sequential execution on Intel Core i5. 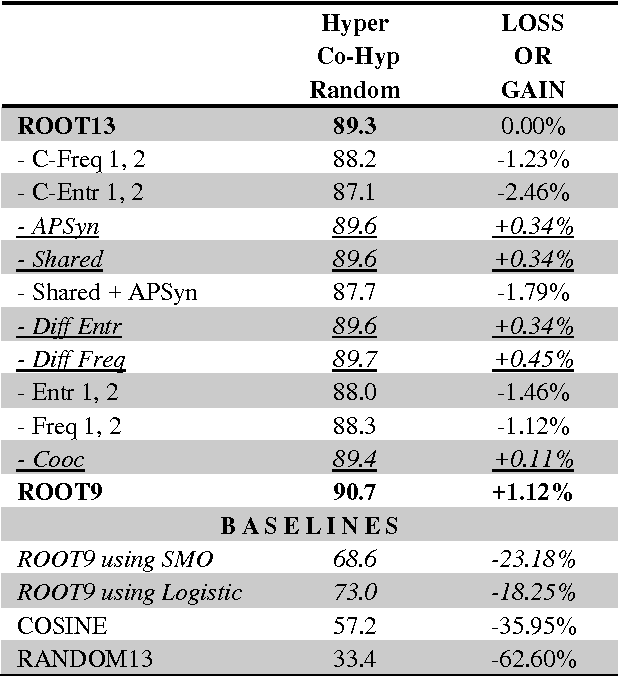 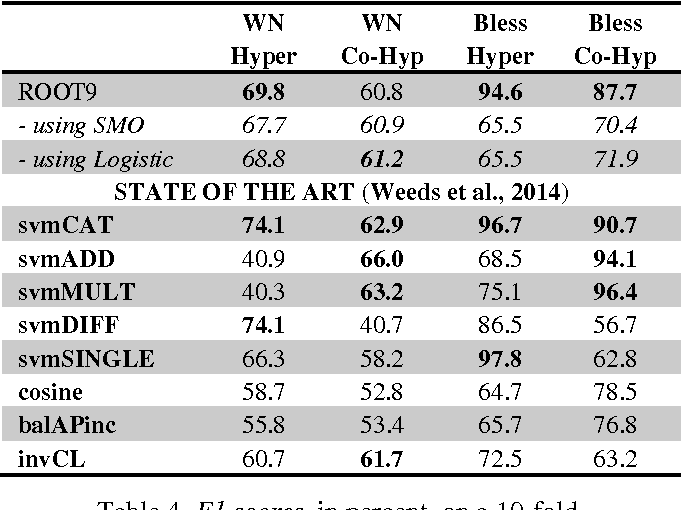 ROOT9 is a supervised system for the classification of hypernyms, co-hyponyms and random words that is derived from the already introduced ROOT13 (Santus et al., 2016). It relies on a Random Forest algorithm and nine unsupervised corpus-based features. We evaluate it with a 10-fold cross validation on 9,600 pairs, equally distributed among the three classes and involving several Parts-Of-Speech (i.e. adjectives, nouns and verbs). When all the classes are present, ROOT9 achieves an F1 score of 90.7%, against a baseline of 57.2% (vector cosine). When the classification is binary, ROOT9 achieves the following results against the baseline: hypernyms-co-hyponyms 95.7% vs. 69.8%, hypernyms-random 91.8% vs. 64.1% and co-hyponyms-random 97.8% vs. 79.4%. In order to compare the performance with the state-of-the-art, we have also evaluated ROOT9 in subsets of the Weeds et al. (2014) datasets, proving that it is in fact competitive. Finally, we investigated whether the system learns the semantic relation or it simply learns the prototypical hypernyms, as claimed by Levy et al. (2015). The second possibility seems to be the most likely, even though ROOT9 can be trained on negative examples (i.e., switched hypernyms) to drastically reduce this bias. 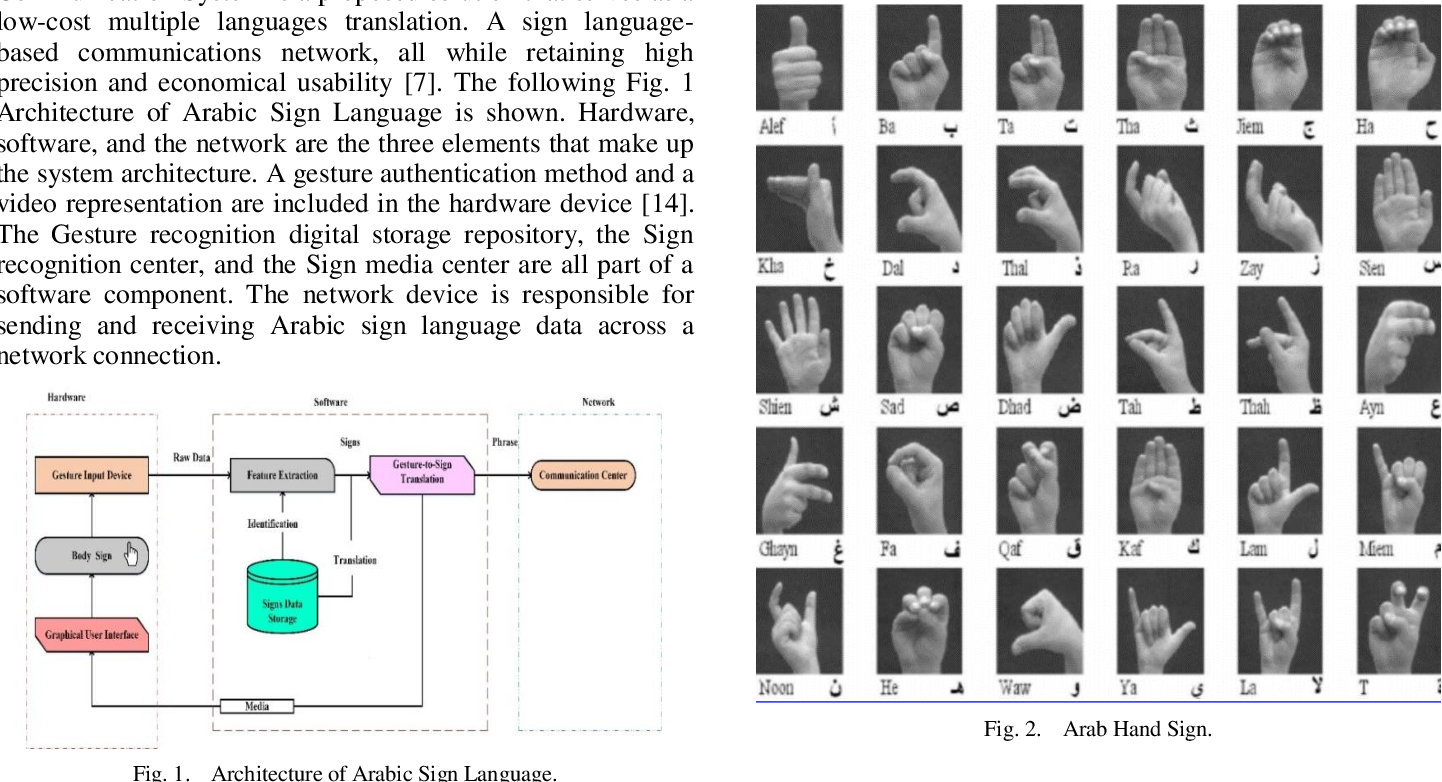 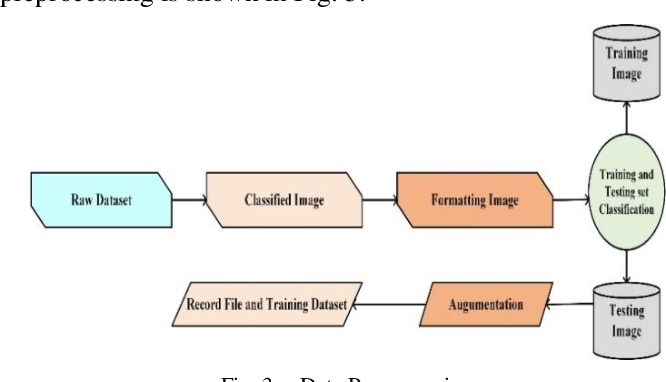 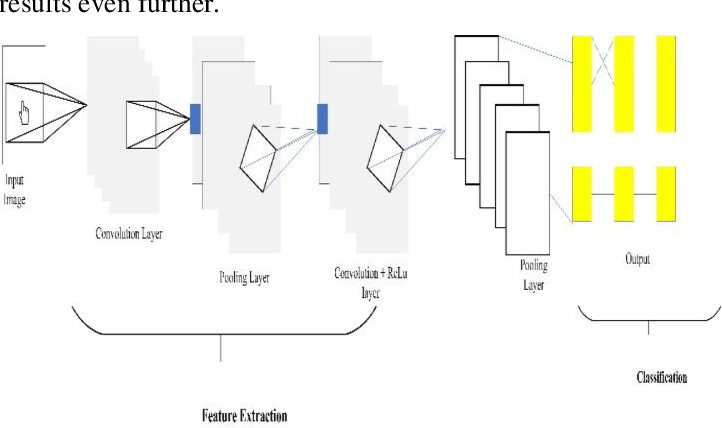 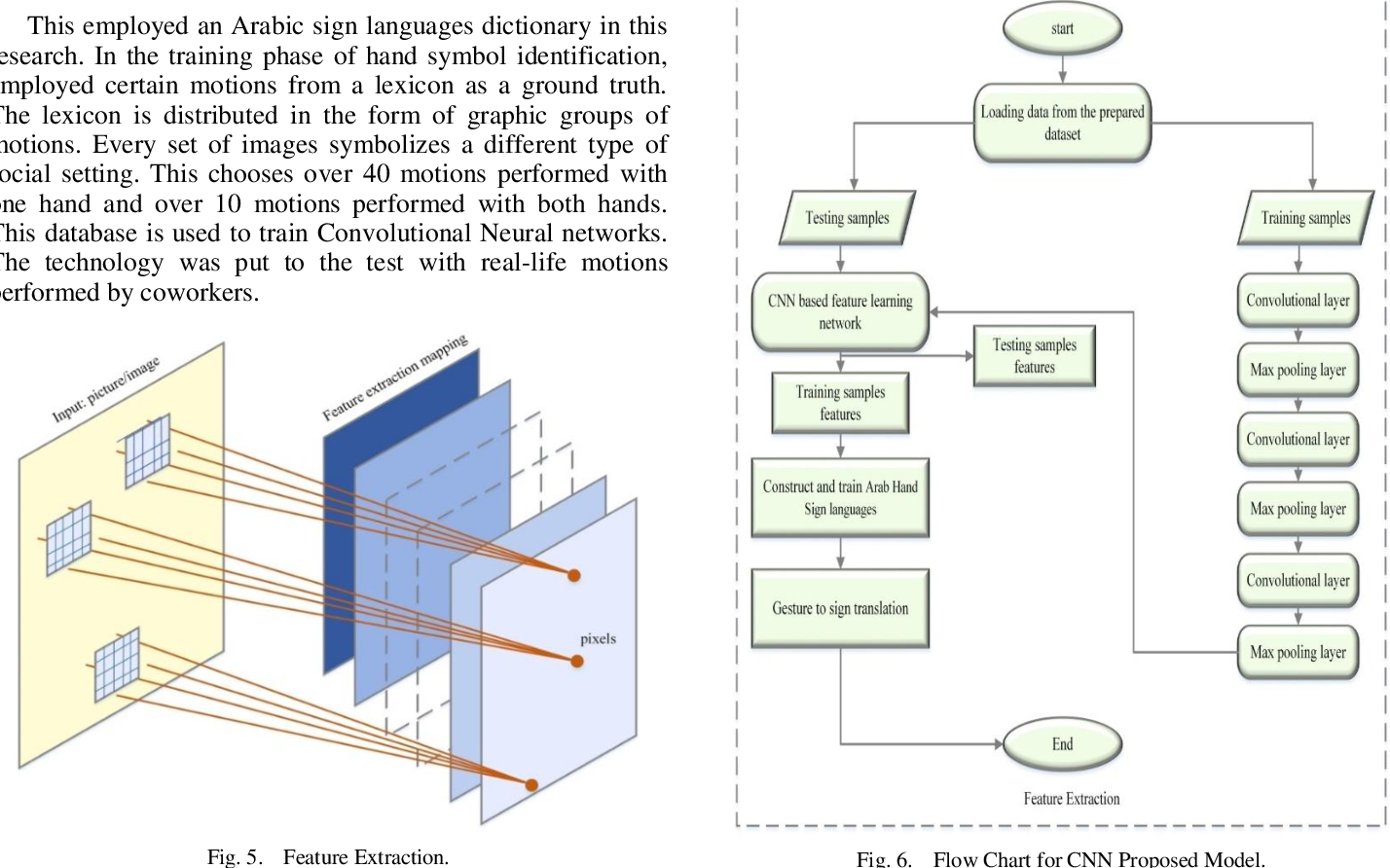 The Arabic Sign Language has endorsed outstanding research achievements for identifying gestures and hand signs using the deep learning methodology. The term "forms of communication" refers to the actions used by hearing-impaired people to communicate. These actions are difficult for ordinary people to comprehend. The recognition of Arabic Sign Language (ArSL) has become a difficult study subject due to variations in Arabic Sign Language (ArSL) from one territory to another and then within states. The Convolution Neural Network has been encapsulated in the proposed system which is based on the machine learning technique. For the recognition of the Arabic Sign Language, the wearable sensor is utilized. This approach has been used a different system that could suit all Arabic gestures. This could be used by the impaired people of the local Arabic community. The research method has been used with reasonable and moderate accuracy. A deep Convolutional network is initially developed for feature extraction from the data gathered by the sensing devices. These sensors can reliably recognize the Arabic sign language's 30 hand sign letters. The hand movements in the dataset were captured using DG5-V hand gloves with wearable sensors. For categorization purposes, the CNN technique is used. The suggested system takes Arabic sign language hand gestures as input and outputs vocalized speech as output. The results were recognized by 90% of the people.

End-to-end singing voice synthesis (SVS) is attractive due to the avoidance of pre-aligned data. However, the auto learned alignment of singing voice with lyrics is difficult to match the duration information in musical score, which will lead to the model instability or even failure to synthesize voice. To learn accurate alignment information automatically, this paper proposes an end-to-end SVS framework, named Singing-Tacotron. The main difference between the proposed framework and Tacotron is that the speech can be controlled significantly by the musical score's duration information. Firstly, we propose a global duration control attention mechanism for the SVS model. The attention mechanism can control each phoneme's duration. Secondly, a duration encoder is proposed to learn a set of global transition tokens from the musical score. These transition tokens can help the attention mechanism decide whether moving to the next phoneme or staying at each decoding step. Thirdly, to further improve the model's stability, a dynamic filter is designed to help the model overcome noise interference and pay more attention to local context information. Subjective and objective evaluation verify the effectiveness of the method. Furthermore, the role of global transition tokens and the effect of duration control are explored. Examples of experiments can be found at https://hairuo55.github.io/SingingTacotron. 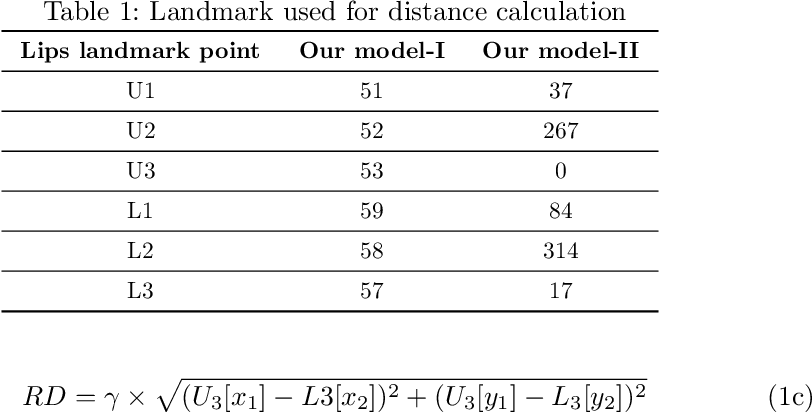 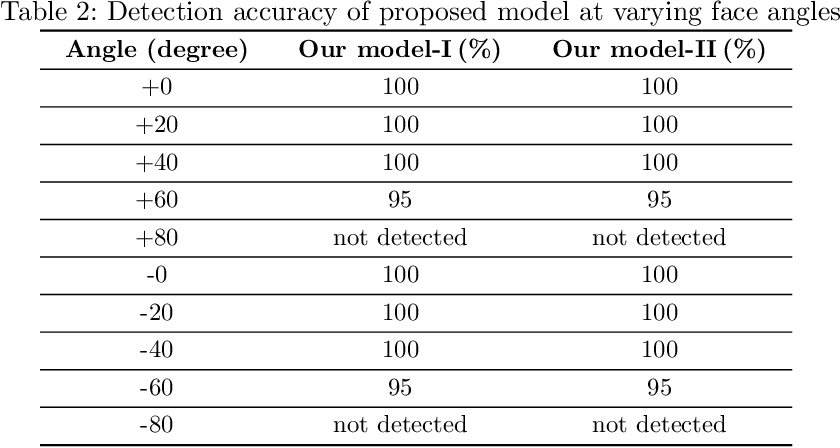 Vision-based deep learning models can be promising for speech-and-hearing-impaired and secret communications. While such non-verbal communications are primarily investigated with hand-gestures and facial expressions, no research endeavour is tracked so far for the lips state (i.e., open/close)-based interpretation/translation system. In support of this development, this paper reports two new Convolutional Neural Network (CNN) models for lips state detection. Building upon two prominent lips landmark detectors, DLIB and MediaPipe, we simplify lips-state model with a set of six key landmarks, and use their distances for the lips state classification. Thereby, both the models are developed to count the opening and closing of lips and thus, they can classify a symbol with the total count. Varying frame-rates, lips-movements and face-angles are investigated to determine the effectiveness of the models. Our early experimental results demonstrate that the model with DLIB is relatively slower in terms of an average of 6 frames per second (FPS) and higher average detection accuracy of 95.25%. In contrast, the model with MediaPipe offers faster landmark detection capability with an average FPS of 20 and detection accuracy of 94.4%. Both models thus could effectively interpret the lips state for non-verbal semantics into a natural language. 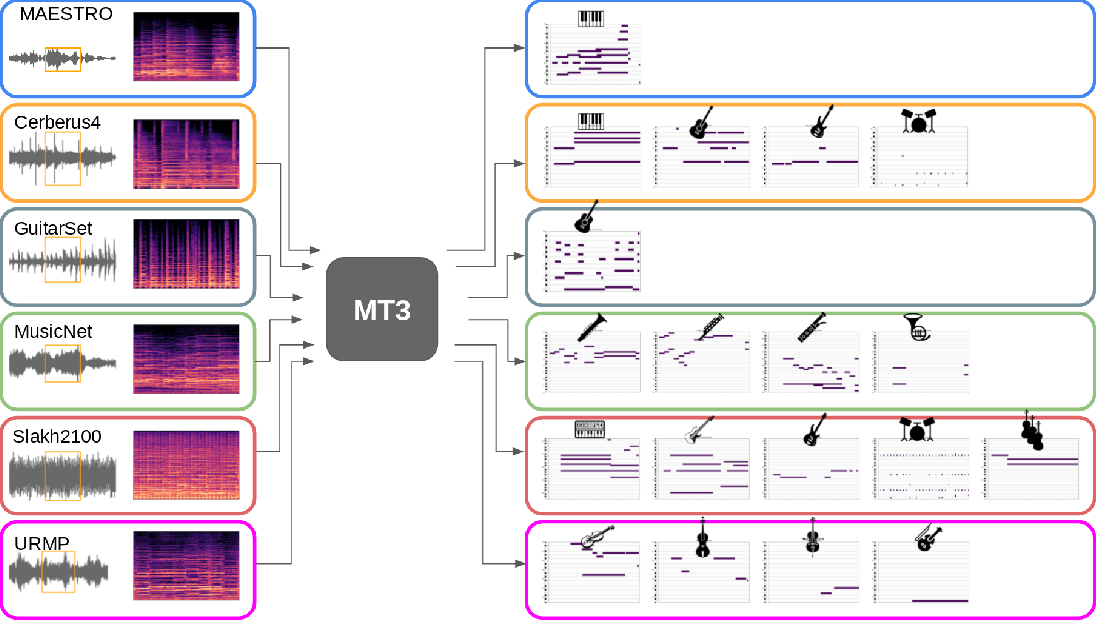 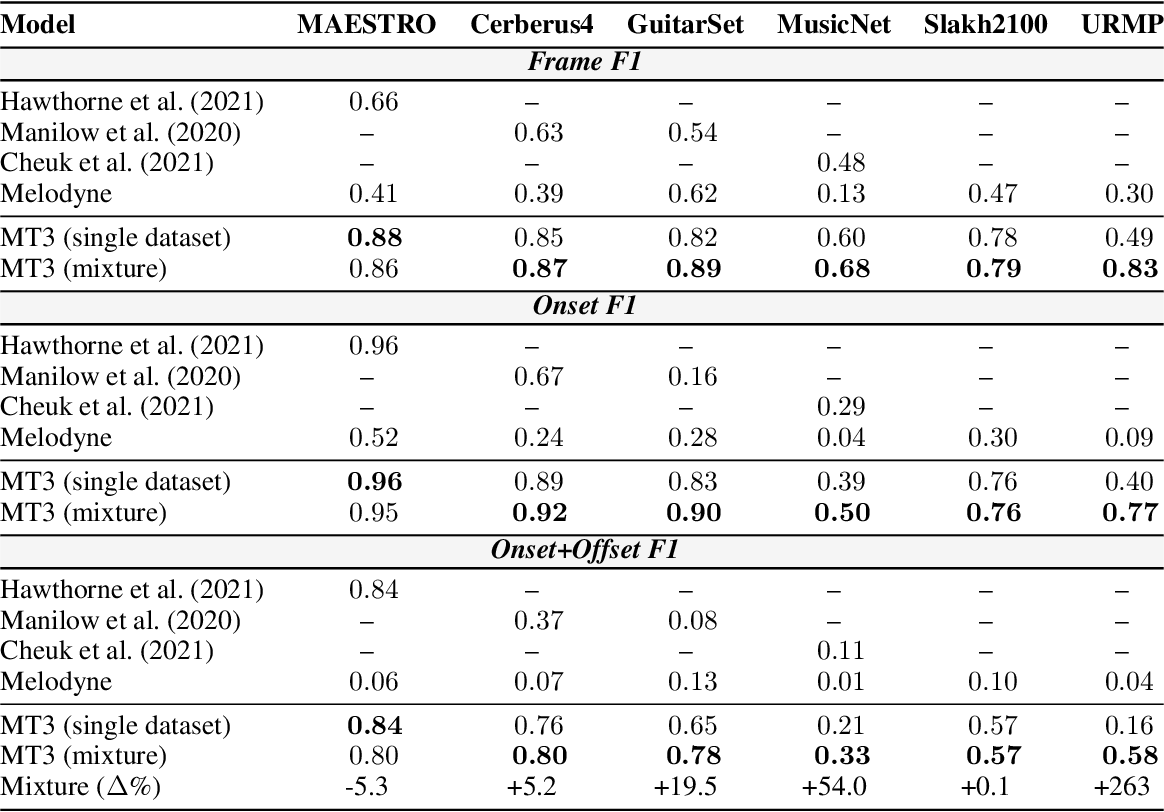 Automatic Music Transcription (AMT), inferring musical notes from raw audio, is a challenging task at the core of music understanding. Unlike Automatic Speech Recognition (ASR), which typically focuses on the words of a single speaker, AMT often requires transcribing multiple instruments simultaneously, all while preserving fine-scale pitch and timing information. Further, many AMT datasets are "low-resource", as even expert musicians find music transcription difficult and time-consuming. Thus, prior work has focused on task-specific architectures, tailored to the individual instruments of each task. In this work, motivated by the promising results of sequence-to-sequence transfer learning for low-resource Natural Language Processing (NLP), we demonstrate that a general-purpose Transformer model can perform multi-task AMT, jointly transcribing arbitrary combinations of musical instruments across several transcription datasets. We show this unified training framework achieves high-quality transcription results across a range of datasets, dramatically improving performance for low-resource instruments (such as guitar), while preserving strong performance for abundant instruments (such as piano). Finally, by expanding the scope of AMT, we expose the need for more consistent evaluation metrics and better dataset alignment, and provide a strong baseline for this new direction of multi-task AMT. 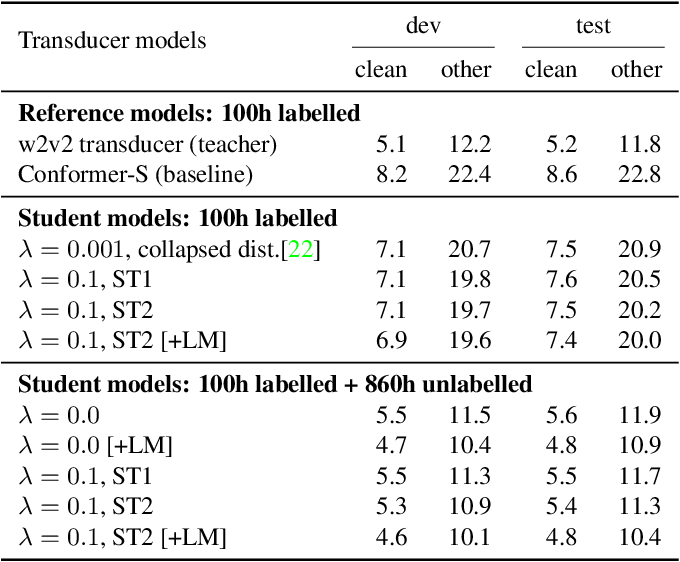 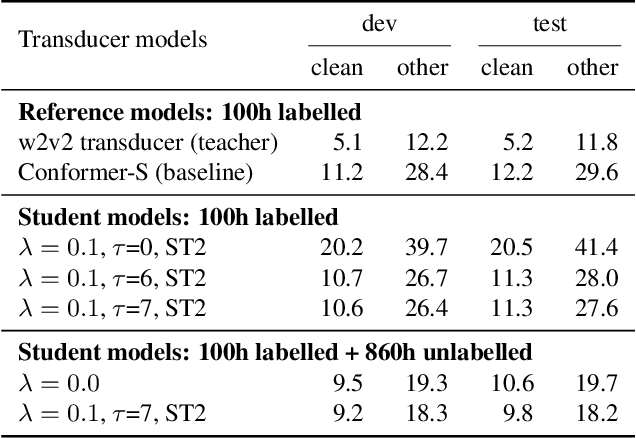 Self-supervised pre-training is an effective approach to leveraging a large amount of unlabelled data to boost the performance of automatic speech recognition (ASR) systems. However, it is impractical to serve large pre-trained models for real-world ASR applications. Therefore, it is desirable to have a much smaller model while retaining the performance of the pre-trained model. In this paper, we propose a simple knowledge distillation (KD) loss function for neural transducers that focuses on the one-best path in the output probability lattice under both the streaming and non-streaming setups, which allows the small student model to approach the performance of the large pre-trained teacher model. Experiments on the LibriSpeech dataset show that despite being more than 10 times smaller than the teacher model, the proposed loss results in relative word error rate reductions (WERRs) of 11.4% and 6.8% on test-other set for non-streaming and streaming student models compared to the baseline transducers trained without KD using the labelled 100-hour clean data. With additional 860-hour unlabelled data for KD, the WERRs increase to 50.4% and 38.5% for non-streaming and streaming students. If language model shallow fusion is used for producing distillation targets, further improvement on the student model is observed.