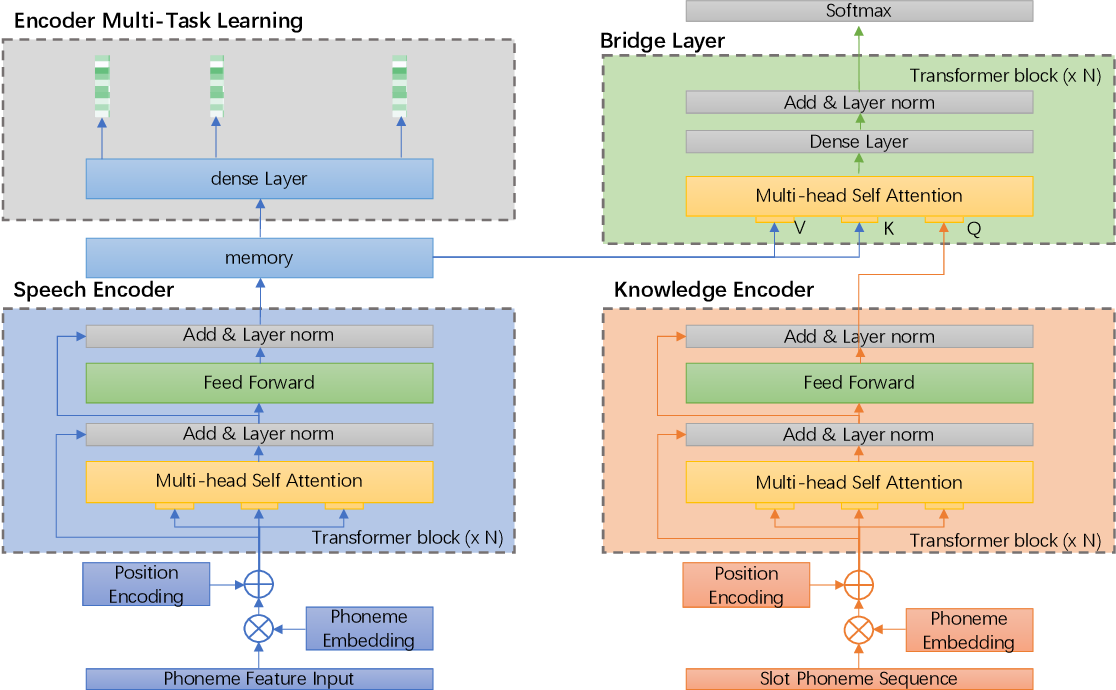 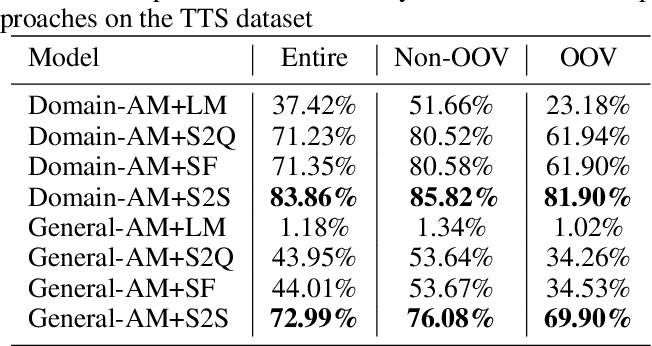 In contrast to conventional pipeline Spoken Language Understanding (SLU) which consists of automatic speech recognition (ASR) and natural language understanding (NLU), end-to-end SLU infers the semantic meaning directly from speech and overcomes the error propagation caused by ASR. End-to-end slot filling (SF) from speech is an essential component of end-to-end SLU, and is usually regarded as a sequence-to-sequence generation problem, heavily relied on the performance of language model of ASR. However, it is hard to generate a correct slot when the slot is out-of-vovabulary (OOV) in training data, especially when a slot is an anti-linguistic entity without grammatical rule. Inspired by object detection in computer vision that is to detect the object from an image, we consider SF as the task of slot detection from speech. In this paper, we formulate the SF task as a matching task and propose an end-to-end knowledge-based SF model, named Speech-to-Slot (Speech2Slot), to leverage knowledge to detect the boundary of a slot from the speech. We also release a large-scale dataset of Chinese speech for slot filling, containing more than 830,000 samples. The experiments show that our approach is markedly superior to the conventional pipeline SLU approach, and outperforms the state-of-the-art end-to-end SF approach with 12.51% accuracy improvement. 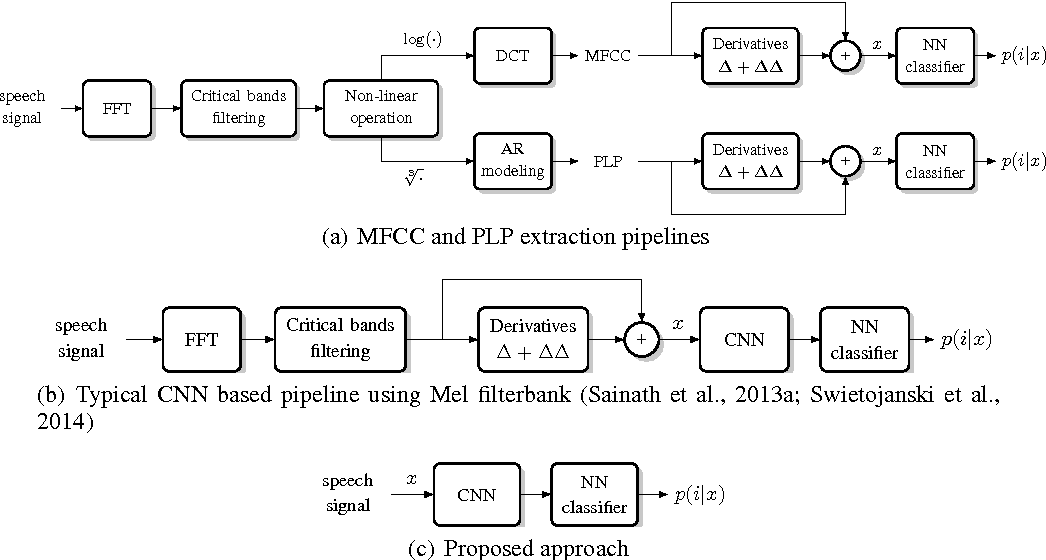 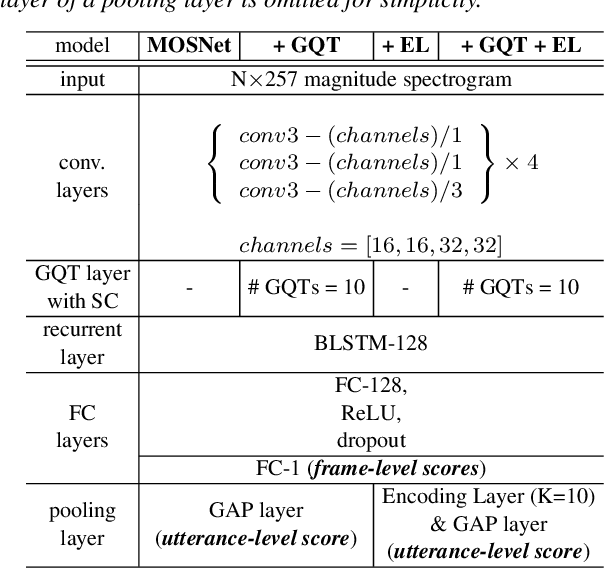 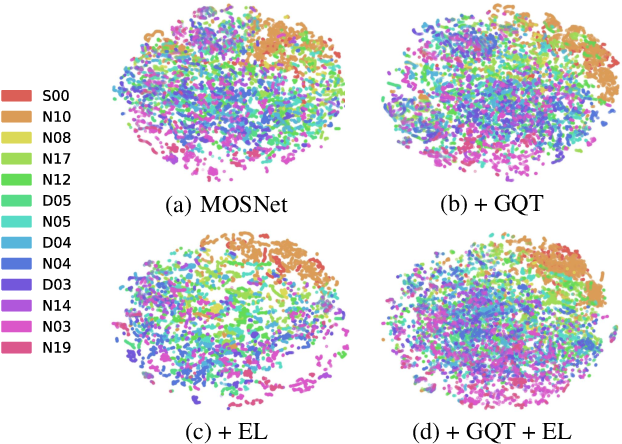 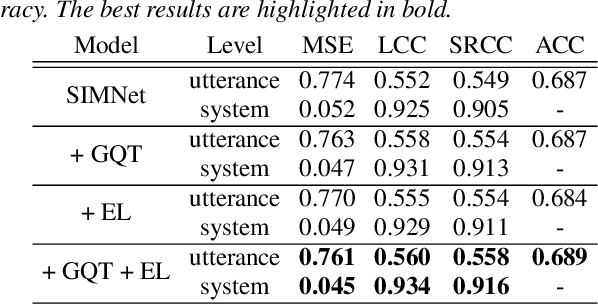 While deep learning has made impressive progress in speech synthesis and voice conversion, the assessment of the synthesized speech is still carried out by human participants. Several recent papers have proposed deep-learning-based assessment models and shown the potential to automate the speech quality assessment. To improve the previously proposed assessment model, MOSNet, we propose three models using cluster-based modeling methods: using a global quality token (GQT) layer, using an Encoding Layer, and using both of them. We perform experiments using the evaluation results of the Voice Conversion Challenge 2018 to predict the mean opinion score of synthesized speech and similarity score between synthesized speech and reference speech. The results show that the GQT layer helps to predict human assessment better by automatically learning the useful quality tokens for the task and that the Encoding Layer helps to utilize frame-level scores more precisely. 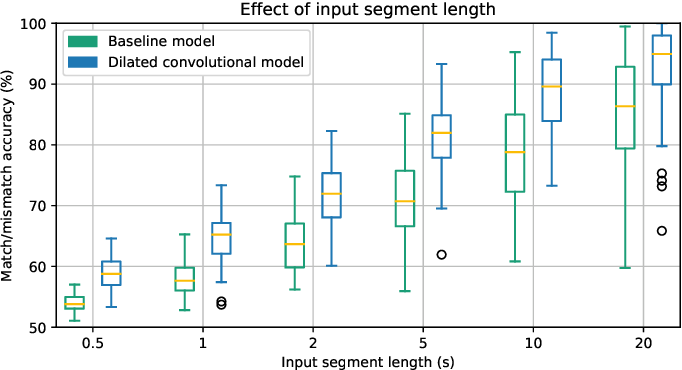 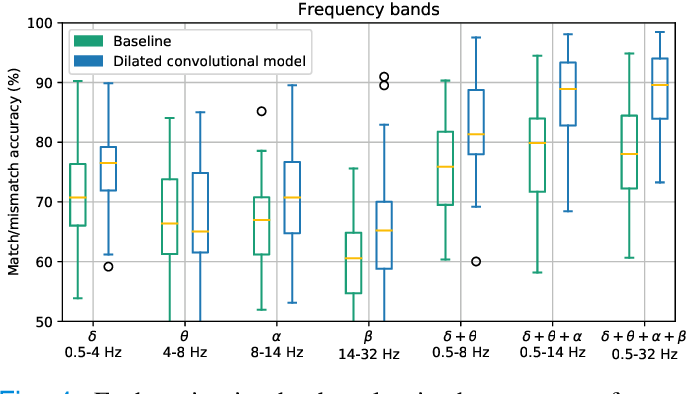 Objective: Currently, only behavioral speech understanding tests are available, which require active participation of the person. As this is infeasible for certain populations, an objective measure of speech intelligibility is required. Recently, brain imaging data has been used to establish a relationship between stimulus and brain response. Linear models have been successfully linked to speech intelligibility but require per-subject training. We present a deep-learning-based model incorporating dilated convolutions that can be used to predict speech intelligibility without subject-specific (re)training. Methods: We evaluated the performance of the model as a function of input segment length, EEG frequency band and receptive field size while comparing it to a baseline model. Next, we evaluated performance on held-out data and finetuning. Finally, we established a link between the accuracy of our model and the state-of-the-art behavioral MATRIX test. Results: The model significantly outperformed the baseline for every input segment length (p$\leq10^{-9}$), for all EEG frequency bands except the theta band (p$\leq0.001$) and for receptive field sizes larger than 125 ms (p$\leq0.05$). Additionally, finetuning significantly increased the accuracy (p$\leq0.05$) on a held-out dataset. Finally, a significant correlation (r=0.59, p=0.0154) was found between the speech reception threshold estimated using the behavioral MATRIX test and our objective method. Conclusion: Our proposed dilated convolutional model can be used as a proxy for speech intelligibility. Significance: Our method is the first to predict the speech reception threshold from EEG for unseen subjects, contributing to objective measures of speech intelligibility. 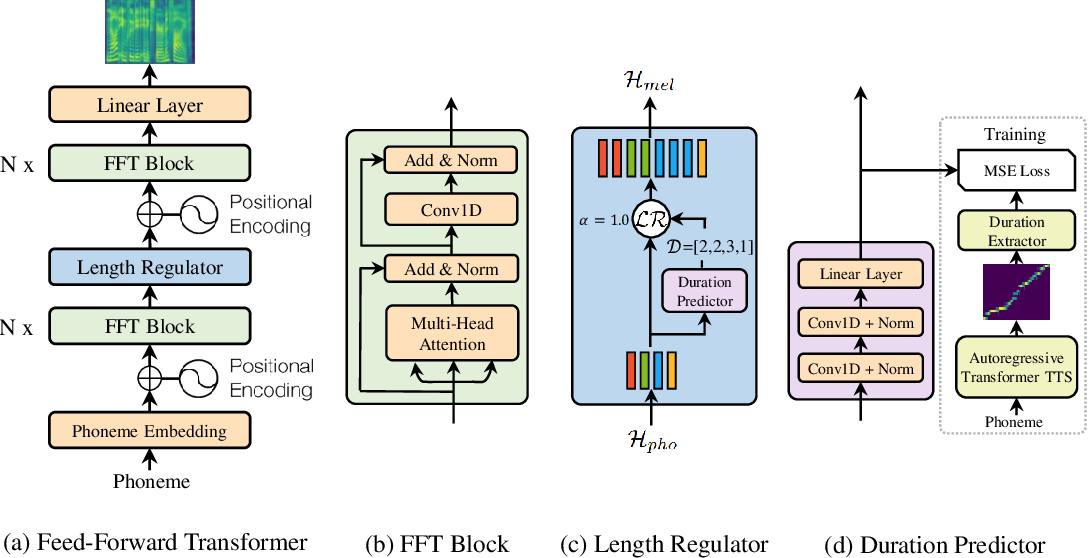 Neural network based end-to-end text to speech (TTS) has significantly improved the quality of synthesized speech. Prominent methods (e.g., Tacotron 2) usually first generate mel-spectrogram from text, and then synthesize speech from mel-spectrogram using vocoder such as WaveNet. Compared with traditional concatenative and statistical parametric approaches, neural network based end-to-end models suffer from slow inference speed, and the synthesized speech is usually not robust (i.e., some words are skipped or repeated) and lack of controllability (voice speed or prosody control). In this work, we propose a novel feed-forward network based on Transformer to generate mel-spectrogram in parallel for TTS. Specifically, we extract attention alignments from an encoder-decoder based teacher model for phoneme duration prediction, which is used by a length regulator to expand the source phoneme sequence to match the length of target mel-spectrogram sequence for parallel mel-spectrogram generation. Experiments on the LJSpeech dataset show that our parallel model matches autoregressive models in terms of speech quality, nearly eliminates the problem of word skipping and repeating in particularly hard cases, and can adjust voice speed smoothly. Most importantly, compared with autoregressive Transformer TTS, our model speeds up the mel-spectrogram generation by 270x and the end-to-end speech synthesis by 38x. Therefore, we call our model FastSpeech. We will release the code on Github. Synthesized speech samples can be found in https://speechresearch.github.io/fastspeech/. 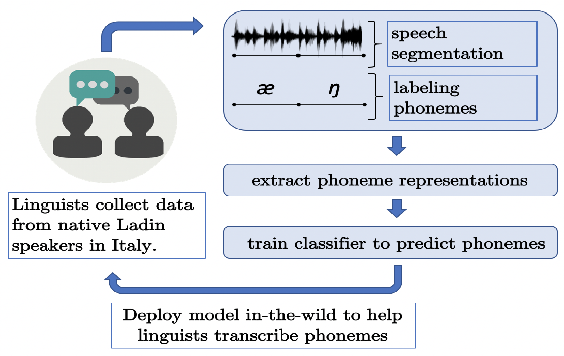 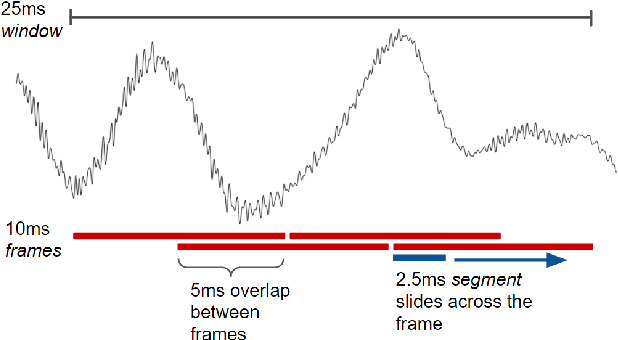 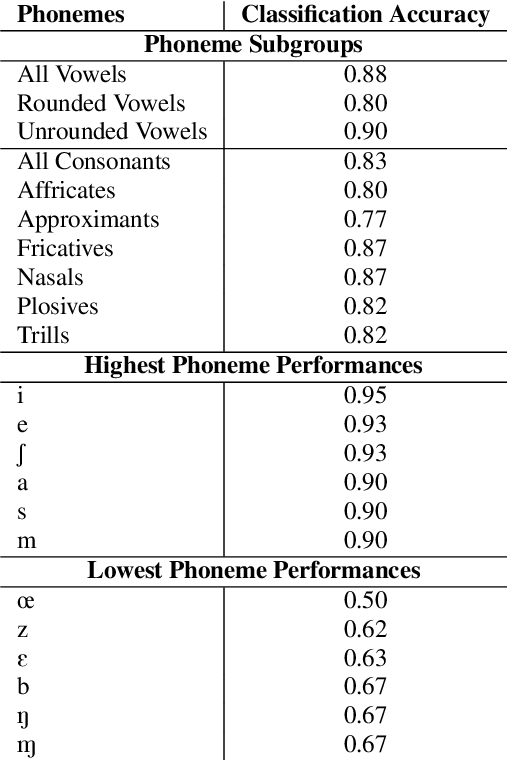 A vast majority of the world's 7,000 spoken languages are predicted to become extinct within this century, including the endangered language of Ladin from the Italian Alps. Linguists who work to preserve a language's phonetic and phonological structure can spend hours transcribing each minute of speech from native speakers. To address this problem in the context of Ladin, our paper presents the first analysis of speech representations and machine learning models for classifying 32 phonemes of Ladin. We experimented with a novel dataset of the Fascian dialect of Ladin, collected from native speakers in Italy. We created frame-level and segment-level speech feature extraction approaches and conducted extensive experiments with 8 different classifiers trained on 9 different speech representations. Our speech representations ranged from traditional features (MFCC, LPC) to features learned with deep neural network models (autoencoders, LSTM autoencoders, and WaveNet). Our highest-performing classifier, trained on MFCC representations of speech signals, achieved an 86% average accuracy across all Ladin phonemes. We also obtained average accuracies above 77% for all Ladin phoneme subgroups examined. Our findings contribute insights for learning discriminative Ladin phoneme representations and demonstrate the potential for leveraging machine learning and speech signal processing to preserve Ladin and other endangered languages. 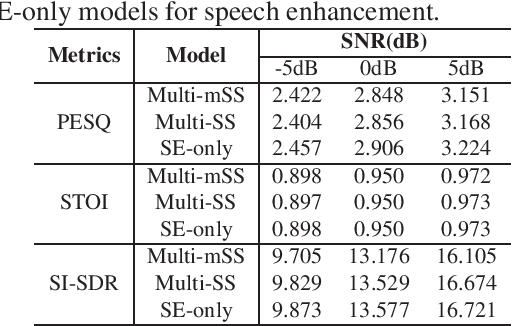 Robust voice activity detection (VAD) is a challenging task in low signal-to-noise (SNR) environments. Recent studies show that speech enhancement is helpful to VAD, but the performance improvement is limited. To address this issue, here we propose a speech enhancement aided end-to-end multi-task model for VAD. The model has two decoders, one for speech enhancement and the other for VAD. The two decoders share the same encoder and speech separation network. Unlike the direct thought that takes two separated objectives for VAD and speech enhancement respectively, here we propose a new joint optimization objective---VAD-masked scale-invariant source-to-noise ratio (mSI-SDR). mSI-SDR uses VAD information to mask the output of the speech enhancement decoder in the training process. It makes the VAD and speech enhancement tasks jointly optimized not only at the shared encoder and separation network, but also at the objective level. Experimental results show that the multi-task method significantly outperforms its single-task VAD counterpart. Moreover, mSI-SDR outperforms SI-SDR in the same multi-task setting. Finally, the model performs well in real-time conditions.

Spoken language understanding (SLU) tasks are usually solved by first transcribing an utterance with automatic speech recognition (ASR) and then feeding the output to a text-based model. Recent advances in self-supervised representation learning for speech data have focused on improving the ASR component. We investigate whether representation learning for speech has matured enough to replace ASR in SLU. We compare learned speech features from wav2vec 2.0, state-of-the-art ASR transcripts, and the ground truth text as input for a novel speech-based named entity recognition task, a cardiac arrest detection task on real-world emergency calls and two existing SLU benchmarks. We show that learned speech features are superior to ASR transcripts on three classification tasks. For machine translation, ASR transcripts are still the better choice. We highlight the intrinsic robustness of wav2vec 2.0 representations to out-of-vocabulary words as key to better performance.


* Under review as a conference paper at ICASSP 2022 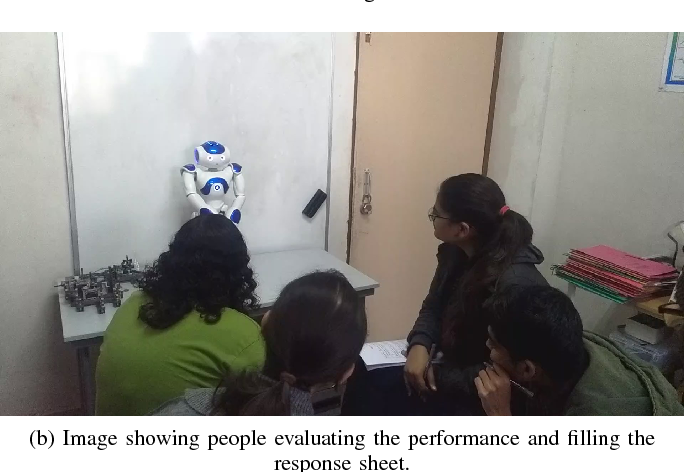 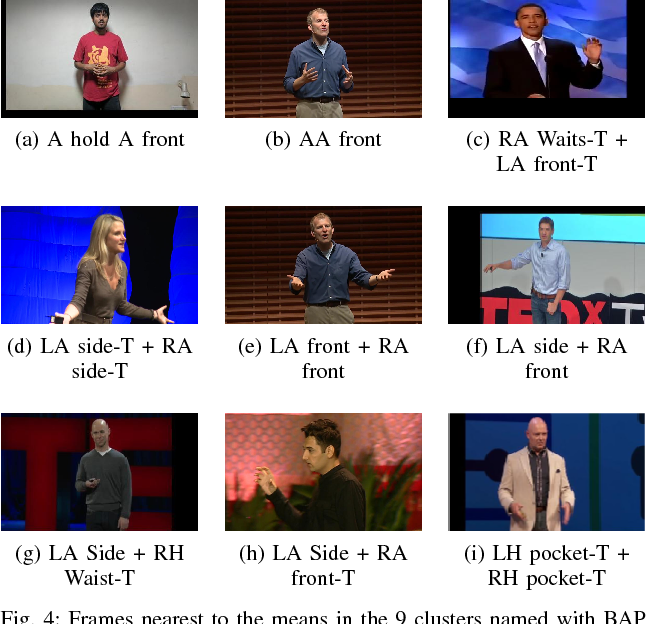 A robot needs contextual awareness, effective speech production and complementing non-verbal gestures for successful communication in society. In this paper, we present our end-to-end system that tries to enhance the effectiveness of non-verbal gestures. For achieving this, we identified prominently used gestures in performances by TED speakers and mapped them to their corresponding speech context and modulated speech based upon the attention of the listener. The proposed method utilized Convolutional Pose Machine [4] to detect the human gesture. Dominant gestures of TED speakers were used for learning the gesture-to-speech mapping. The speeches by them were used for training the model. We also evaluated the engagement of the robot with people by conducting a social survey. The effectiveness of the performance was monitored by the robot and it self-improvised its speech pattern on the basis of the attention level of the audience, which was calculated using visual feedback from the camera. The effectiveness of interaction as well as the decisions made during improvisation was further evaluated based on the head-pose detection and interaction survey.

An inversion of the speech polarity may have a dramatic detrimental effect on the performance of various techniques of speech processing. An automatic method for determining the speech polarity (which is dependent upon the recording setup) is thus required as a preliminary step for ensuring the well-behaviour of such techniques. This paper proposes a new approach of polarity detection relying on oscillating statistical moments. These moments have the property to oscillate at the local fundamental frequency and to exhibit a phase shift which depends on the speech polarity. This dependency stems from the introduction of non-linearity or higher-order statistics in the moment calculation. The resulting method is shown on 10 speech corpora to provide a substantial improvement compared to state-of-the-art techniques.