Physical adversarial attacks in object detection have attracted increasing attention. However, most previous works focus on hiding the objects from the detector by generating an individual adversarial patch, which only covers the planar part of the vehicle's surface and fails to attack the detector in physical scenarios for multi-view, long-distance and partially occluded objects. To bridge the gap between digital attacks and physical attacks, we exploit the full 3D vehicle surface to propose a robust Full-coverage Camouflage Attack (FCA) to fool detectors. Specifically, we first try rendering the non-planar camouflage texture over the full vehicle surface. To mimic the real-world environment conditions, we then introduce a transformation function to transfer the rendered camouflaged vehicle into a photo-realistic scenario. Finally, we design an efficient loss function to optimize the camouflage texture. Experiments show that the full-coverage camouflage attack can not only outperform state-of-the-art methods under various test cases but also generalize to different environments, vehicles, and object detectors. 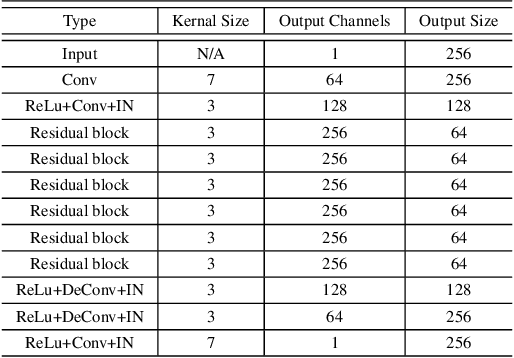 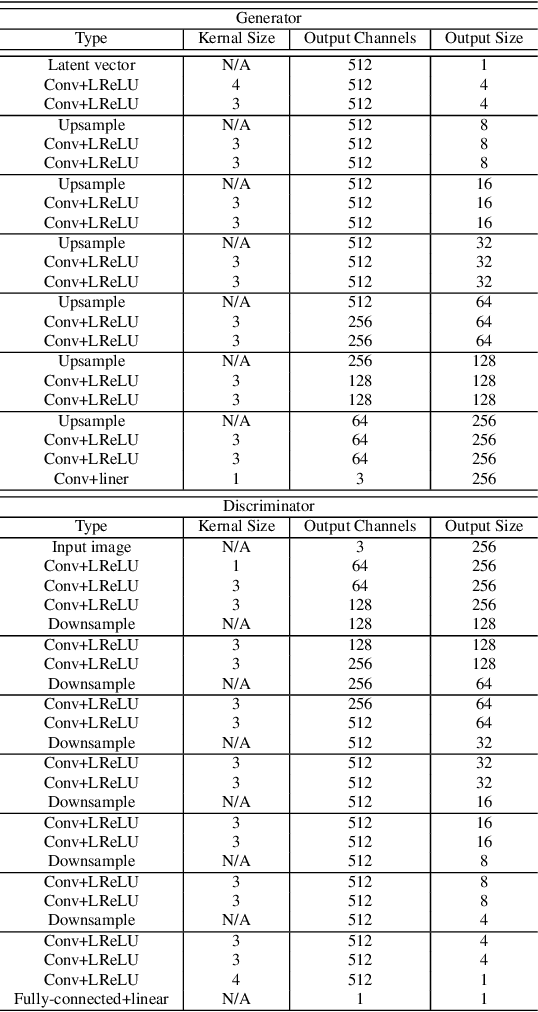 Manga is a world popular comic form originated in Japan, which typically employs black-and-white stroke lines and geometric exaggeration to describe humans' appearances, poses, and actions. In this paper, we propose MangaGAN, the first method based on Generative Adversarial Network (GAN) for unpaired photo-to-manga translation. Inspired by how experienced manga artists draw manga, MangaGAN generates the geometric features of manga face by a designed GAN model and delicately translates each facial region into the manga domain by a tailored multi-GANs architecture. For training MangaGAN, we construct a new dataset collected from a popular manga work, containing manga facial features, landmarks, bodies, and so on. Moreover, to produce high-quality manga faces, we further propose a structural smoothing loss to smooth stroke-lines and avoid noisy pixels, and a similarity preserving module to improve the similarity between domains of photo and manga. Extensive experiments show that MangaGAN can produce high-quality manga faces which preserve both the facial similarity and a popular manga style, and outperforms other related state-of-the-art methods. Current supervised sketch-based image retrieval (SBIR) methods achieve excellent performance. However, the cost of data collection and labeling imposes an intractable barrier to practical deployment of real applications. In this paper, we present the first attempt at unsupervised SBIR to remove the labeling cost (category annotations and sketch-photo pairings) that is conventionally needed for training. Existing single-domain unsupervised representation learning methods perform poorly in this application, due to the unique cross-domain (sketch and photo) nature of the problem. We therefore introduce a novel framework that simultaneously performs unsupervised representation learning and sketch-photo domain alignment. Technically this is underpinned by exploiting joint distribution optimal transport (JDOT) to align data from different domains during representation learning, which we extend with trainable cluster prototypes and feature memory banks to further improve scalability and efficacy. Extensive experiments show that our framework achieves excellent performance in the new unsupervised setting, and performs comparably or better than state-of-the-art in the zero-shot setting. 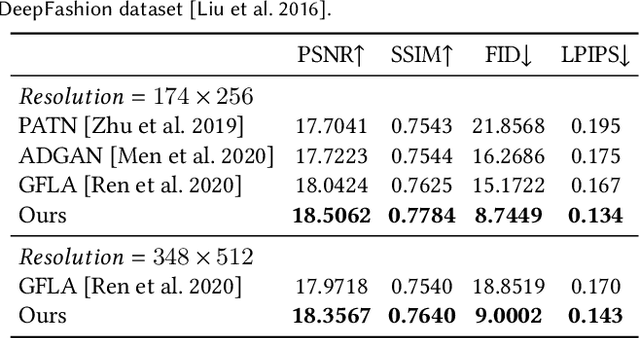 We present an algorithm for re-rendering a person from a single image under arbitrary poses. Existing methods often have difficulties in hallucinating occluded contents photo-realistically while preserving the identity and fine details in the source image. We first learn to inpaint the correspondence field between the body surface texture and the source image with a human body symmetry prior. The inpainted correspondence field allows us to transfer/warp local features extracted from the source to the target view even under large pose changes. Directly mapping the warped local features to an RGB image using a simple CNN decoder often leads to visible artifacts. Thus, we extend the StyleGAN generator so that it takes pose as input (for controlling poses) and introduces a spatially varying modulation for the latent space using the warped local features (for controlling appearances). We show that our method compares favorably against the state-of-the-art algorithms in both quantitative evaluation and visual comparison. 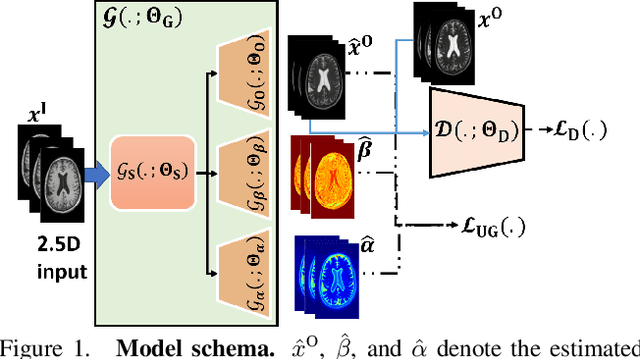 Image-to-image translation is an ill-posed problem as unique one-to-one mapping may not exist between the source and target images. Learning-based methods proposed in this context often evaluate the performance on test data that is similar to the training data, which may be impractical. This demands robust methods that can quantify uncertainty in the prediction for making informed decisions, especially for critical areas such as medical imaging. Recent works that employ conditional generative adversarial networks (GANs) have shown improved performance in learning photo-realistic image-to-image mappings between the source and the target images. However, these methods do not focus on (i)~robustness of the models to out-of-distribution (OOD)-noisy data and (ii)~uncertainty quantification. This paper proposes a GAN-based framework that (i)~models an adaptive loss function for robustness to OOD-noisy data that automatically tunes the spatially varying norm for penalizing the residuals and (ii)~estimates the per-voxel uncertainty in the predictions. We demonstrate our method on two key applications in medical imaging: (i)~undersampled magnetic resonance imaging (MRI) reconstruction (ii)~MRI modality propagation. Our experiments with two different real-world datasets show that the proposed method (i)~is robust to OOD-noisy test data and provides improved accuracy and (ii)~quantifies voxel-level uncertainty in the predictions. Text-to-image synthesis aims to generate a photo-realistic image from a given natural language description. Previous works have made significant progress with Generative Adversarial Networks (GANs). Nonetheless, it is still hard to generate intact objects or clear textures (Fig 1). To address this issue, we propose Feature-Aware Generative Adversarial Network (FA-GAN) to synthesize a high-quality image by integrating two techniques: a self-supervised discriminator and a feature-aware loss. First, we design a self-supervised discriminator with an auxiliary decoder so that the discriminator can extract better representation. Secondly, we introduce a feature-aware loss to provide the generator more direct supervision by employing the feature representation from the self-supervised discriminator. Experiments on the MS-COCO dataset show that our proposed method significantly advances the state-of-the-art FID score from 28.92 to 24.58. Generating portrait images by controlling the motions of existing faces is an important task of great consequence to social media industries. For easy use and intuitive control, semantically meaningful and fully disentangled parameters should be used as modifications. However, many existing techniques do not provide such fine-grained controls or use indirect editing methods i.e. mimic motions of other individuals. In this paper, a Portrait Image Neural Renderer (PIRenderer) is proposed to control the face motions with the parameters of three-dimensional morphable face models (3DMMs). The proposed model can generate photo-realistic portrait images with accurate movements according to intuitive modifications. Experiments on both direct and indirect editing tasks demonstrate the superiority of this model. Meanwhile, we further extend this model to tackle the audio-driven facial reenactment task by extracting sequential motions from audio inputs. We show that our model can generate coherent videos with convincing movements from only a single reference image and a driving audio stream. Our source code is available at https://github.com/RenYurui/PIRender. Photo-realistic facial video portrait reenactment benefits virtual production and numerous VR/AR experiences. The task remains challenging as the portrait should maintain high realism and consistency with the target environment. In this paper, we present a relightable neural video portrait, a simultaneous relighting and reenactment scheme that transfers the head pose and facial expressions from a source actor to a portrait video of a target actor with arbitrary new backgrounds and lighting conditions. Our approach combines 4D reflectance field learning, model-based facial performance capture and target-aware neural rendering. Specifically, we adopt a rendering-to-video translation network to first synthesize high-quality OLAT imagesets and alpha mattes from hybrid facial performance capture results. We then design a semantic-aware facial normalization scheme to enable reliable explicit control as well as a multi-frame multi-task learning strategy to encode content, segmentation and temporal information simultaneously for high-quality reflectance field inference. After training, our approach further enables photo-realistic and controllable video portrait editing of the target performer. Reliable face poses and expression editing is obtained by applying the same hybrid facial capture and normalization scheme to the source video input, while our explicit alpha and OLAT output enable high-quality relit and background editing. With the ability to achieve simultaneous relighting and reenactment, we are able to improve the realism in a variety of virtual production and video rewrite applications.