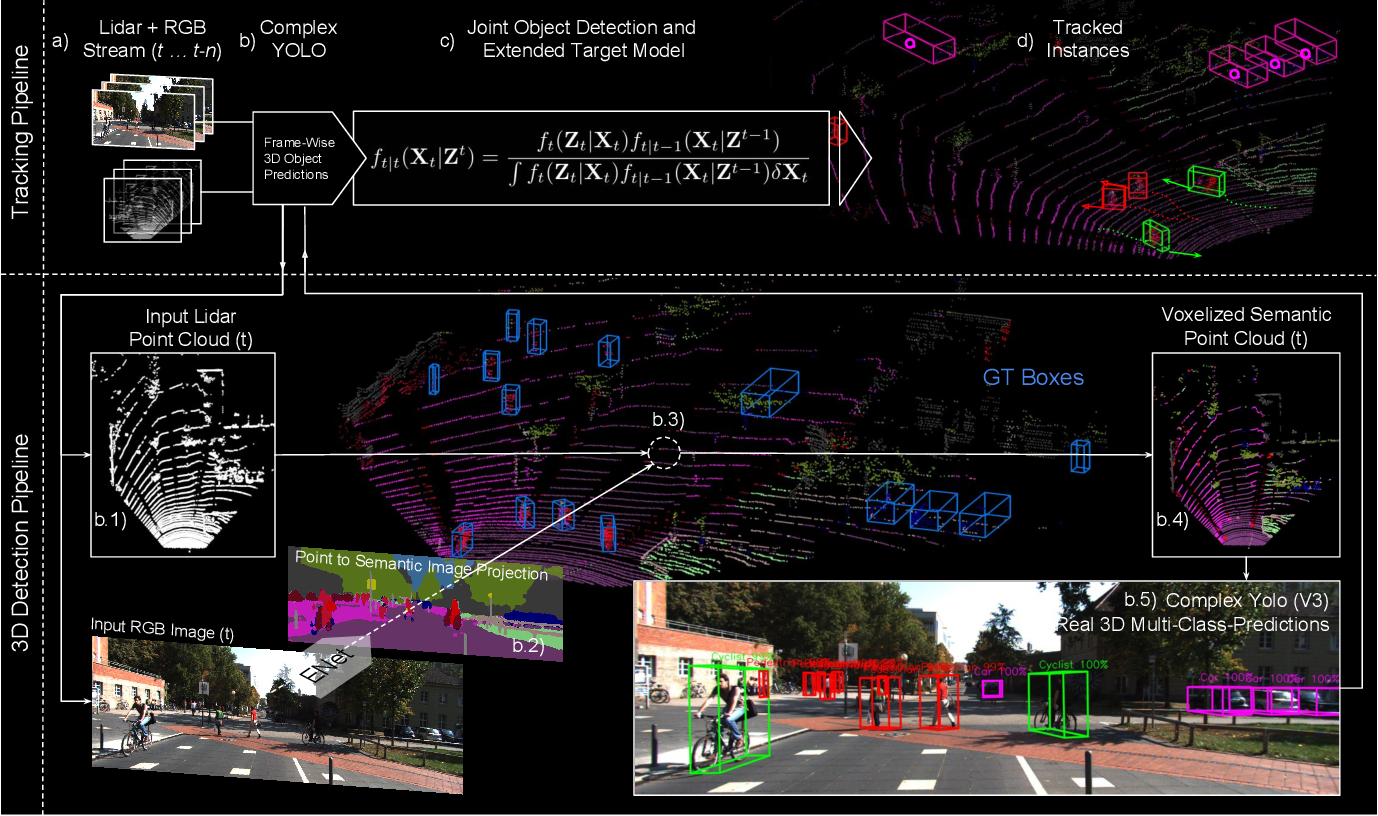 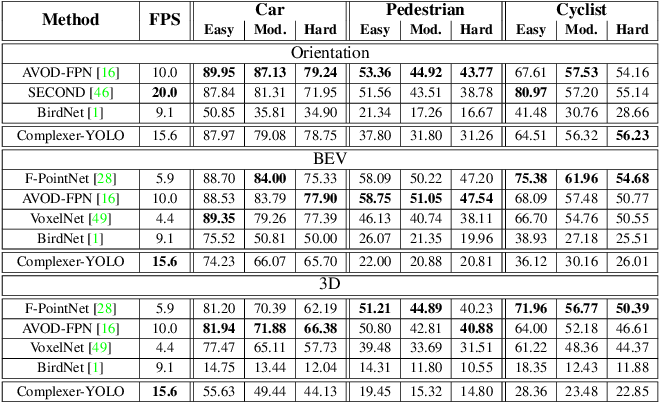 Accurate detection of 3D objects is a fundamental problem in computer vision and has an enormous impact on autonomous cars, augmented/virtual reality and many applications in robotics. In this work we present a novel fusion of neural network based state-of-the-art 3D detector and visual semantic segmentation in the context of autonomous driving. Additionally, we introduce Scale-Rotation-Translation score (SRTs), a fast and highly parameterizable evaluation metric for comparison of object detections, which speeds up our inference time up to 20\% and halves training time. On top, we apply state-of-the-art online multi target feature tracking on the object measurements to further increase accuracy and robustness utilizing temporal information. Our experiments on KITTI show that we achieve same results as state-of-the-art in all related categories, while maintaining the performance and accuracy trade-off and still run in real-time. Furthermore, our model is the first one that fuses visual semantic with 3D object detection. 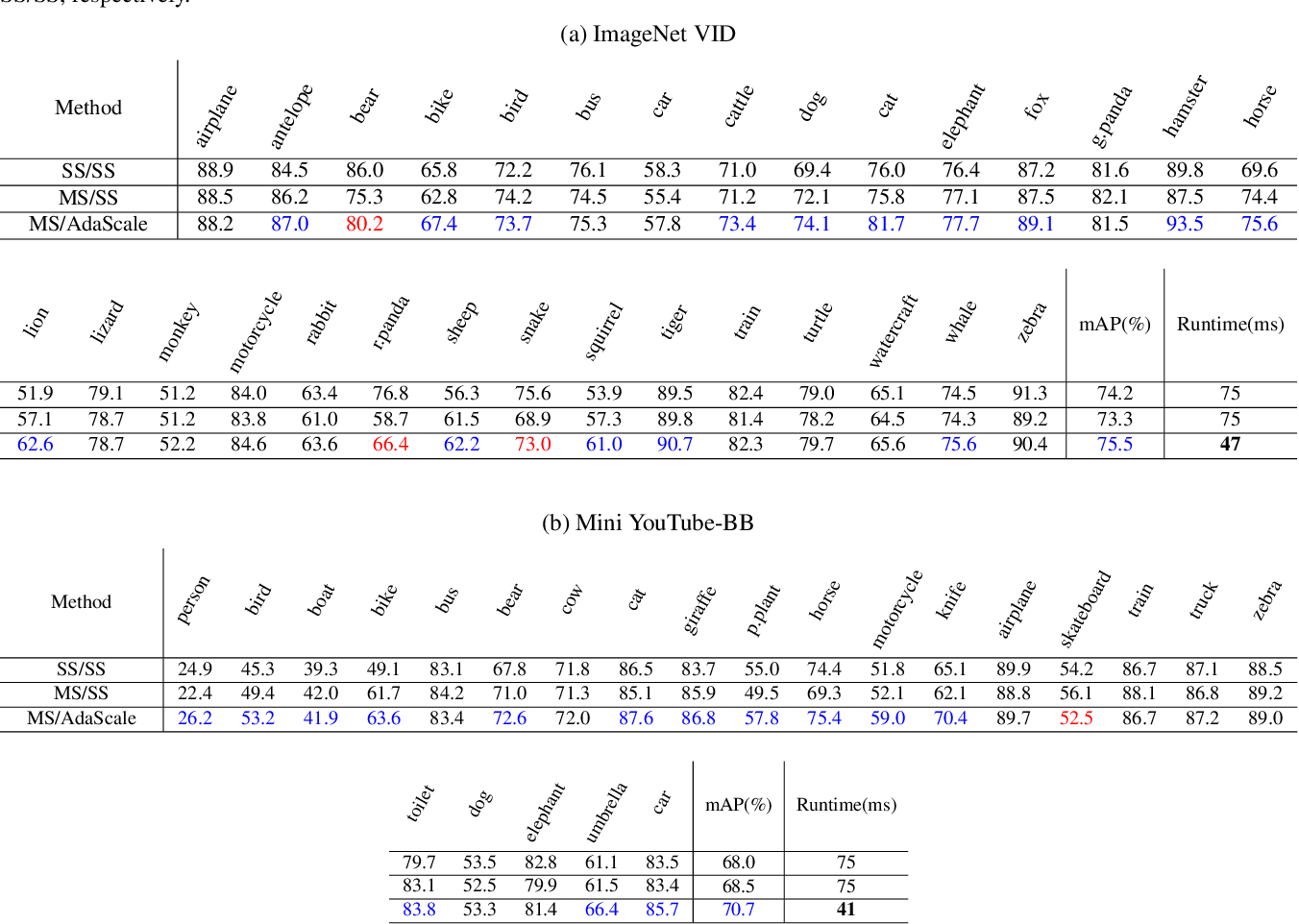 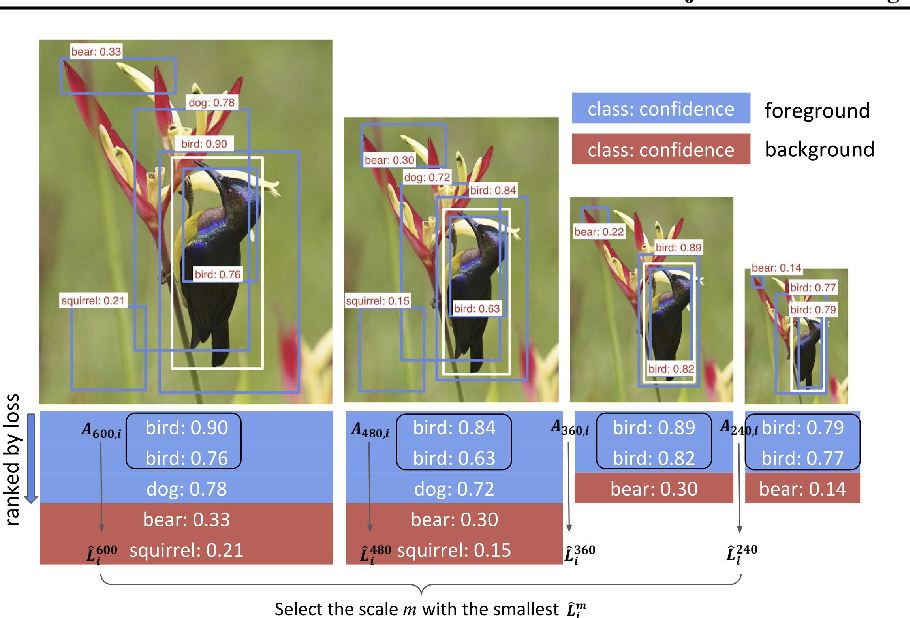 In vision-enabled autonomous systems such as robots and autonomous cars, video object detection plays a crucial role, and both its speed and accuracy are important factors to provide reliable operation. The key insight we show in this paper is that speed and accuracy are not necessarily a trade-off when it comes to image scaling. Our results show that re-scaling the image to a lower resolution will sometimes produce better accuracy. Based on this observation, we propose a novel approach, dubbed AdaScale, which adaptively selects the input image scale that improves both accuracy and speed for video object detection. To this end, our results on ImageNet VID and mini YouTube-BoundingBoxes datasets demonstrate 1.3 points and 2.7 points mAP improvement with 1.6x and 1.8x speedup, respectively. Additionally, we improve state-of-the-art video acceleration work by an extra 1.25x speedup with slightly better mAP on ImageNet VID dataset. 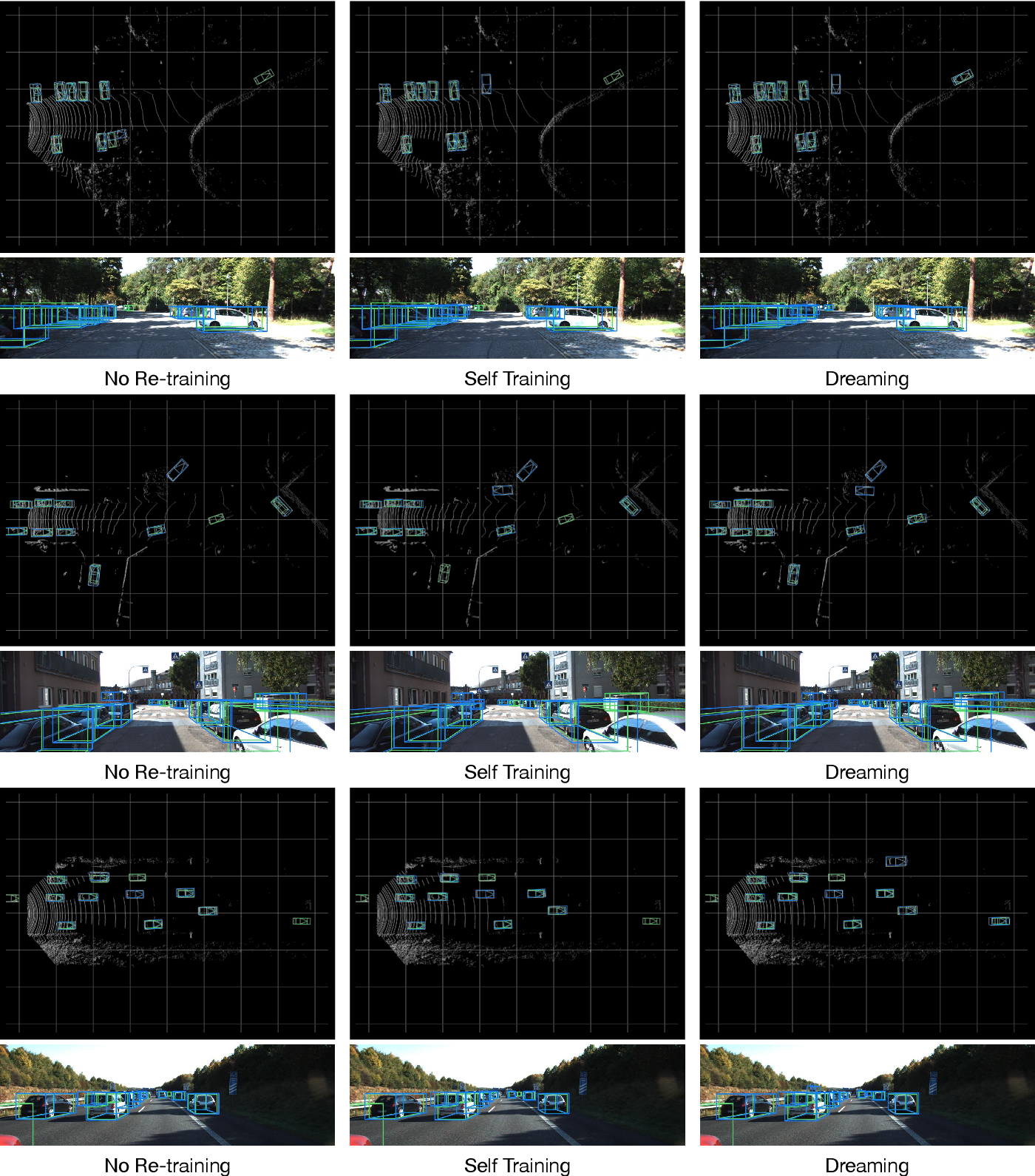 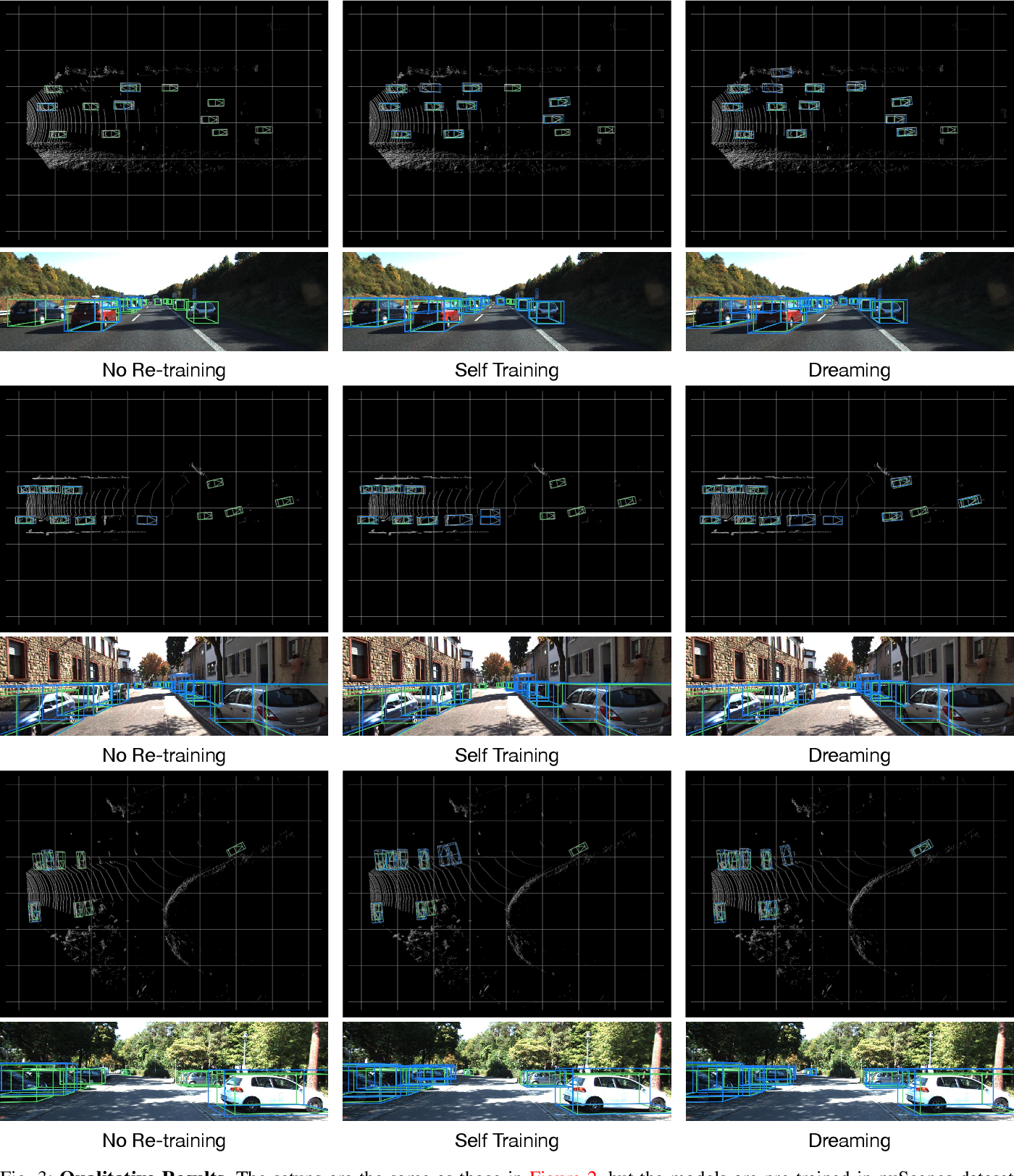 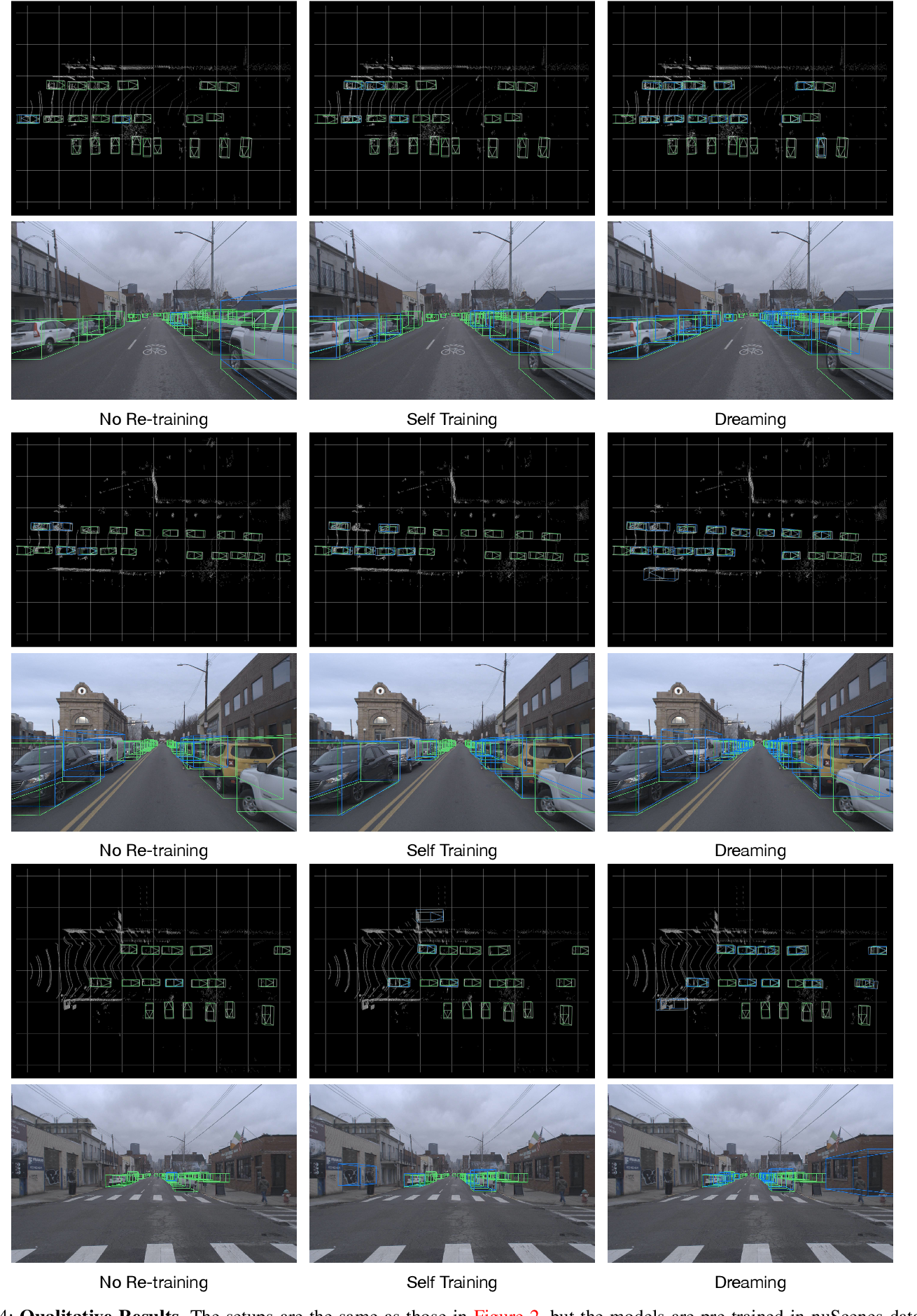 Self-driving cars must detect other vehicles and pedestrians in 3D to plan safe routes and avoid collisions. State-of-the-art 3D object detectors, based on deep learning, have shown promising accuracy but are prone to over-fit to domain idiosyncrasies, making them fail in new environments -- a serious problem if autonomous vehicles are meant to operate freely. In this paper, we propose a novel learning approach that drastically reduces this gap by fine-tuning the detector on pseudo-labels in the target domain, which our method generates while the vehicle is parked, based on replays of previously recorded driving sequences. In these replays, objects are tracked over time, and detections are interpolated and extrapolated -- crucially, leveraging future information to catch hard cases. We show, on five autonomous driving datasets, that fine-tuning the object detector on these pseudo-labels substantially reduces the domain gap to new driving environments, yielding drastic improvements in accuracy and detection reliability. 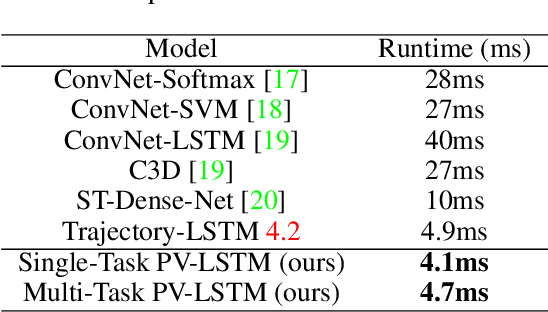 In order to be globally deployed, autonomous cars must guarantee the safety of pedestrians. This is the reason why forecasting pedestrians' intentions sufficiently in advance is one of the most critical and challenging tasks for autonomous vehicles. This work tries to solve this problem by jointly predicting the intention and visual states of pedestrians. In terms of visual states, whereas previous work focused on x-y coordinates, we will also predict the size and indeed the whole bounding box of the pedestrian. The method is a recurrent neural network in a multi-task learning approach. It has one head that predicts the intention of the pedestrian for each one of its future position and another one predicting the visual states of the pedestrian. Experiments on the JAAD dataset show the superiority of the performance of our method compared to previous works for intention prediction. Also, although its simple architecture (more than 2 times faster), the performance of the bounding box prediction is comparable to the ones yielded by much more complex architectures. Our code is available online.


* Accepted and will be presented in hEART2020 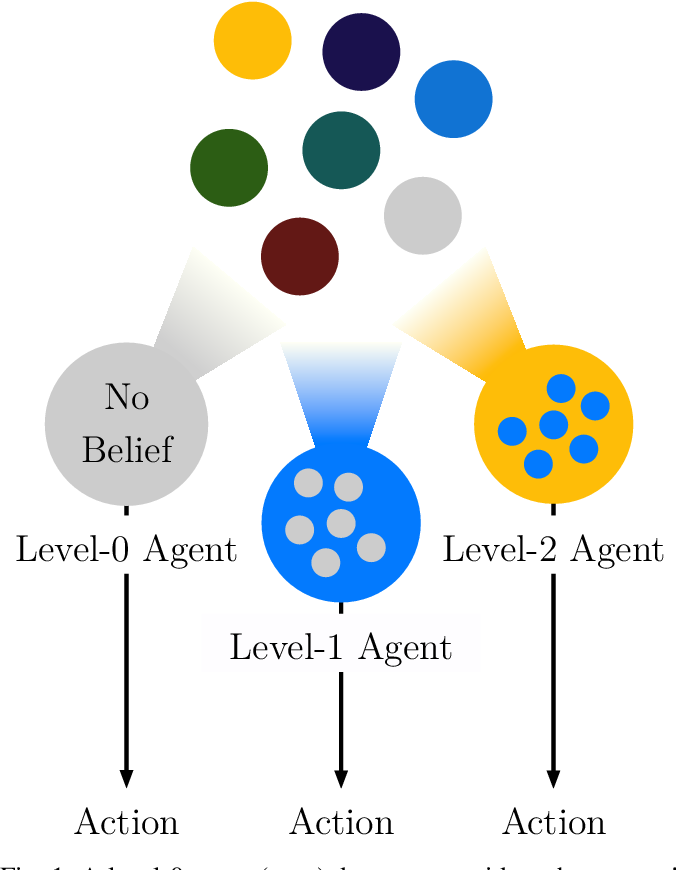 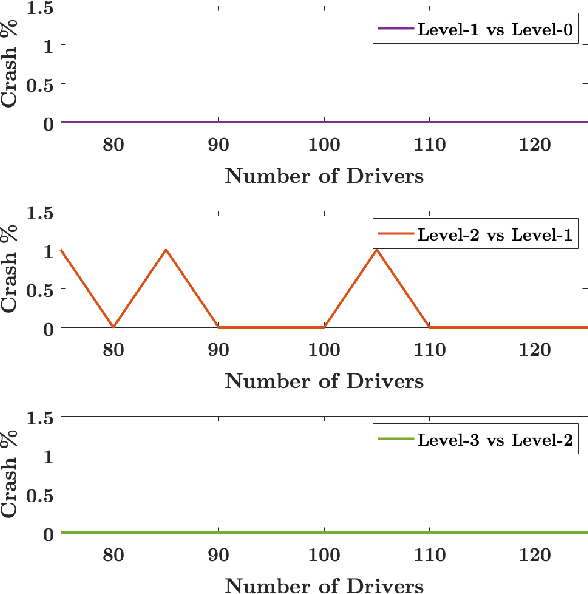 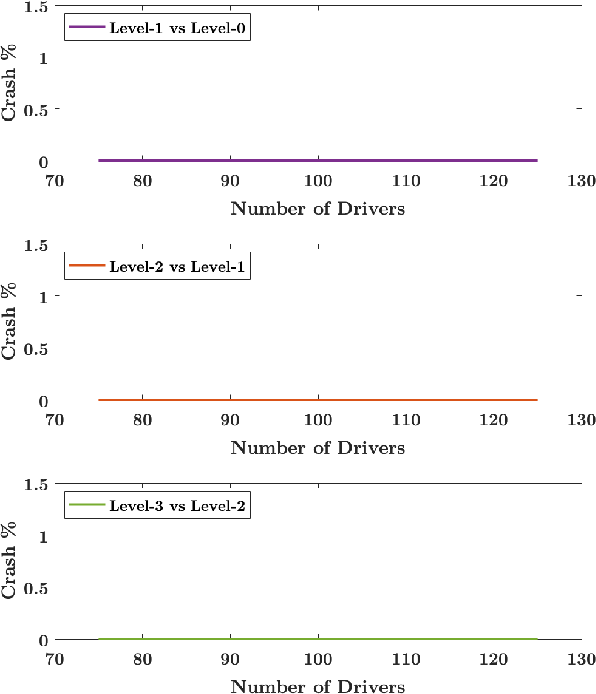 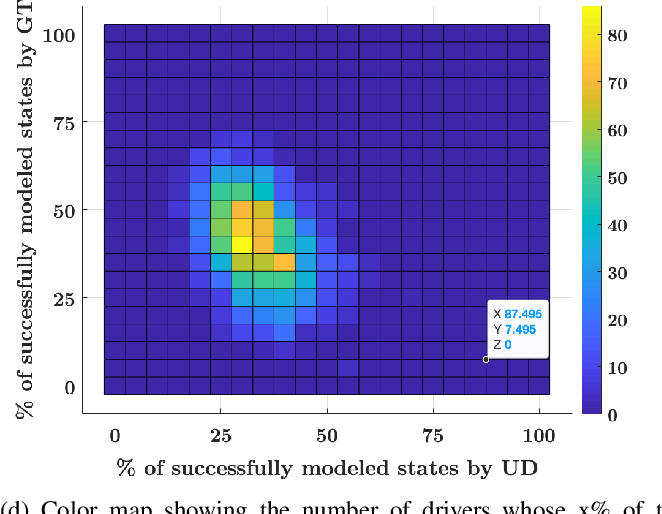 In this paper, a synergistic combination of deep reinforcement learning and hierarchical game theory is proposed as a modeling framework for behavioral predictions of drivers in highway driving scenarios. The need for a modeling framework that can address multiple human-human and human-automation interactions, where all the agents can be modeled as decision makers simultaneously, is the main motivation behind this work. Such a modeling framework may be utilized for the validation and verification of autonomous vehicles: It is estimated that for an autonomous vehicle to reach the same safety level of cars with drivers, millions of miles of driving tests are required. The modeling framework presented in this paper may be used in a high-fidelity traffic simulator consisting of multiple human decision makers to reduce the time and effort spent for testing by allowing safe and quick assessment of self-driving algorithms. To demonstrate the fidelity of the proposed modeling framework, game theoretical driver models are compared with real human driver behavior patterns extracted from traffic data. 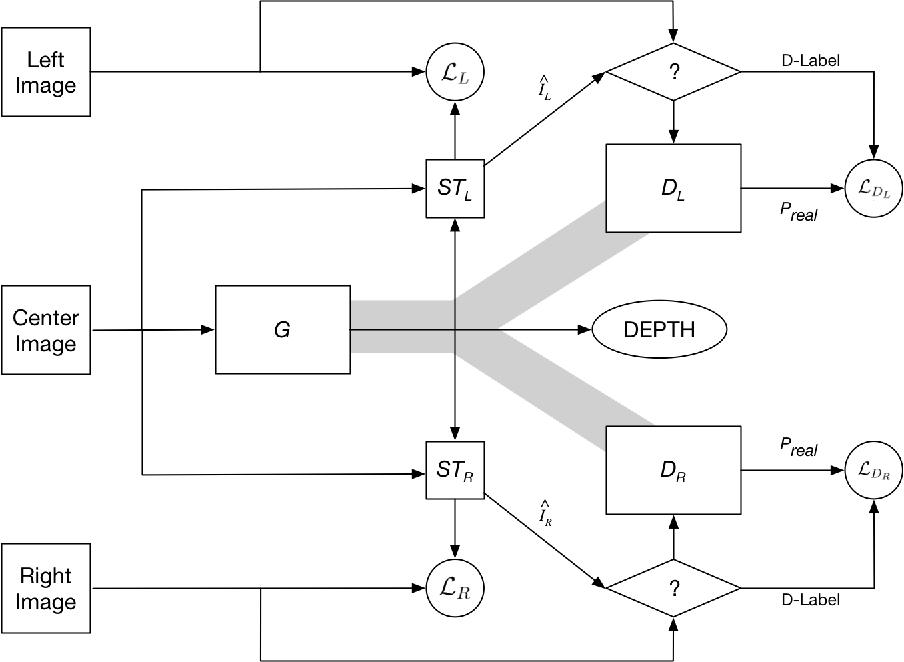 Depth perception is a key component for autonomous systems that interact in the real world, such as delivery robots, warehouse robots, and self-driving cars. Tasks in autonomous robotics such as 3D object recognition, simultaneous localization and mapping (SLAM), path planning and navigation, require some form of 3D spatial information. Depth perception is a long-standing research problem in computer vision and robotics and has had a long history. Many approaches using deep learning, ranging from structure from motion, shape-from-X, monocular, binocular, and multi-view stereo, have yielded acceptable results. However, there are several shortcomings of these methods such as requiring expensive hardware, needing supervised training data, no ground truth data for comparison, and disregard for occlusion. In order to address these shortcomings, this work proposes a new deep convolutional generative adversarial network architecture, called Y-GAN, that uses data from three cameras to estimate a depth map for each frame in a multi-camera video stream. 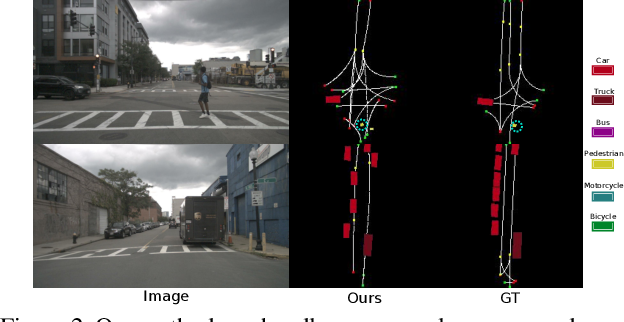 Autonomous navigation requires structured representation of the road network and instance-wise identification of the other traffic agents. Since the traffic scene is defined on the ground plane, this corresponds to scene understanding in the bird's-eye-view (BEV). However, the onboard cameras of autonomous cars are customarily mounted horizontally for a better view of the surrounding, making this task very challenging. In this work, we study the problem of extracting a directed graph representing the local road network in BEV coordinates, from a single onboard camera image. Moreover, we show that the method can be extended to detect dynamic objects on the BEV plane. The semantics, locations, and orientations of the detected objects together with the road graph facilitates a comprehensive understanding of the scene. Such understanding becomes fundamental for the downstream tasks, such as path planning and navigation. We validate our approach against powerful baselines and show that our network achieves superior performance. We also demonstrate the effects of various design choices through ablation studies. Code: https://github.com/ybarancan/STSU

The understanding of the surrounding environment plays a critical role in autonomous robotic systems, such as self-driving cars. Extensive research has been carried out concerning visual perception. Yet, to obtain a more complete perception of the environment, autonomous systems of the future should also take acoustic information into account. Recent sound event localization and detection (SELD) frameworks utilize convolutional recurrent neural networks (CRNNs). However, considering the recurrent nature of CRNNs, it becomes challenging to implement them efficiently on embedded hardware. Not only are their computations strenuous to parallelize, but they also require high memory bandwidth and large memory buffers. In this work, we develop a more robust and hardware-friendly novel architecture based on a temporal convolutional network(TCN). The proposed framework (SELD-TCN) outperforms the state-of-the-art SELDnet performance on four different datasets. Moreover, SELD-TCN achieves 4x faster training time per epoch and 40x faster inference time on an ordinary graphics processing unit (GPU). 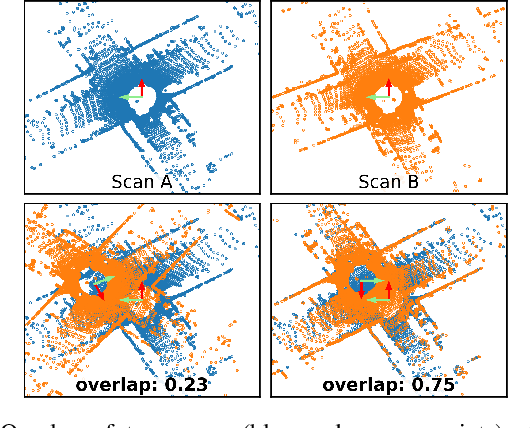 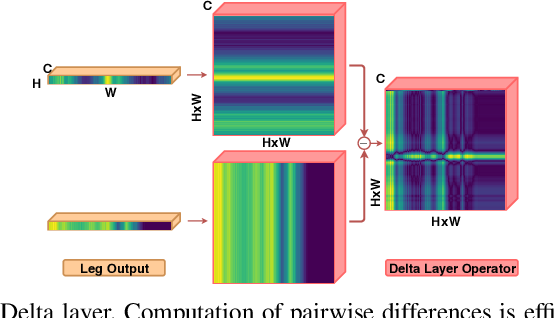 Simultaneous localization and mapping (SLAM) is a fundamental capability required by most autonomous systems. In this paper, we address the problem of loop closing for SLAM based on 3D laser scans recorded by autonomous cars. Our approach utilizes a deep neural network exploiting different cues generated from LiDAR data for finding loop closures. It estimates an image overlap generalized to range images and provides a relative yaw angle estimate between pairs of scans. Based on such predictions, we tackle loop closure detection and integrate our approach into an existing SLAM system to improve its mapping results. We evaluate our approach on sequences of the KITTI odometry benchmark and the Ford campus dataset. We show that our method can effectively detect loop closures surpassing the detection performance of state-of-the-art methods. To highlight the generalization capabilities of our approach, we evaluate our model on the Ford campus dataset while using only KITTI for training. The experiments show that the learned representation is able to provide reliable loop closure candidates, also in unseen environments. 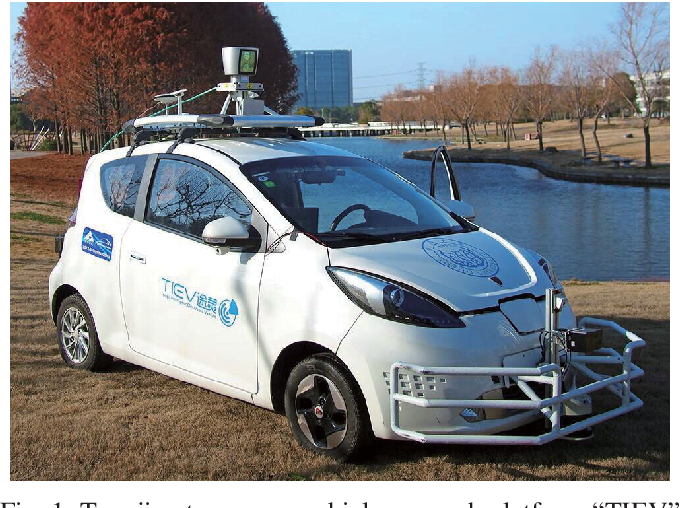 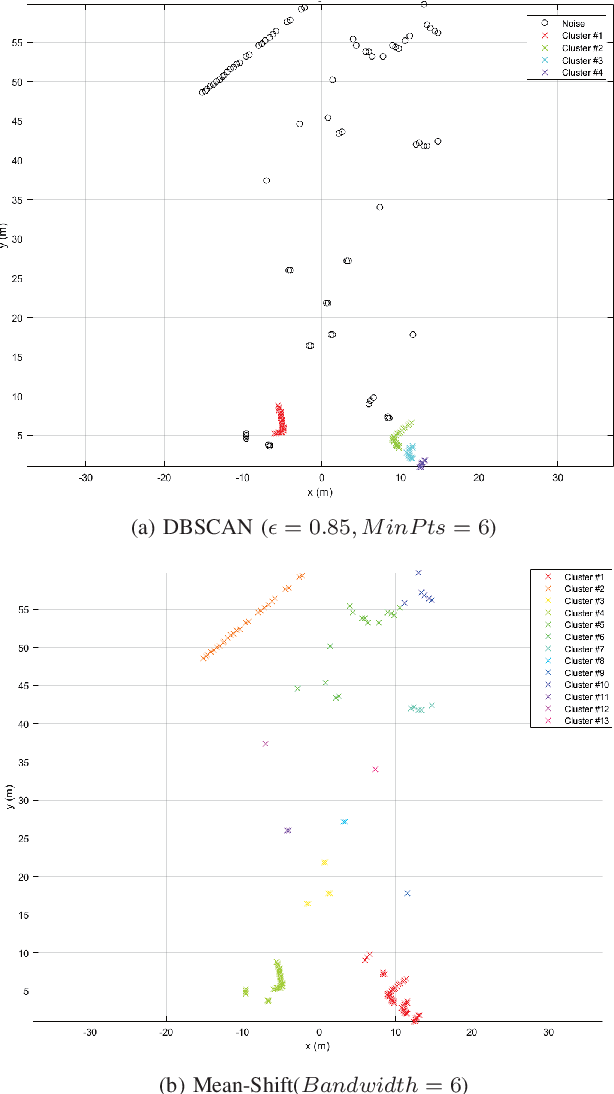 Detecting vehicles with strong robustness and high efficiency has become one of the key capabilities of fully autonomous driving cars. This topic has already been widely studied by GPU-accelerated deep learning approaches using image sensors and 3D LiDAR, however, few studies seek to address it with a horizontally mounted 2D laser scanner. 2D laser scanner is equipped on almost every autonomous vehicle for its superiorities in the field of view, lighting invariance, high accuracy and relatively low price. In this paper, we propose a highly efficient search-based L-Shape fitting algorithm for detecting positions and orientations of vehicles with a 2D laser scanner. Differing from the approach to formulating LShape fitting as a complex optimization problem, our method decomposes the L-Shape fitting into two steps: L-Shape vertexes searching and L-Shape corner localization. Our approach is computationally efficient due to its minimized complexity. In on-road experiments, our approach is capable of adapting to various circumstances with high efficiency and robustness.