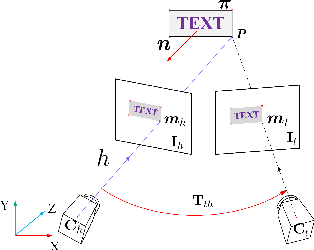 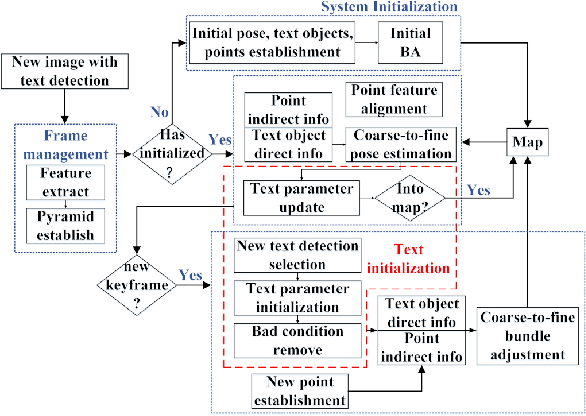 We propose to integrate text objects in man-made scenes tightly into the visual SLAM pipeline. The key idea of our novel text-based visual SLAM is to treat each detected text as a planar feature which is rich of textures and semantic meanings. The text feature is compactly represented by three parameters and integrated into visual SLAM by adopting the illumination-invariant photometric error. We also describe important details involved in implementing a full pipeline of text-based visual SLAM. To our best knowledge, this is the first visual SLAM method tightly coupled with the text features. We tested our method in both indoor and outdoor environments. The results show that with text features, the visual SLAM system becomes more robust and produces much more accurate 3D text maps that could be useful for navigation and scene understanding in robotic or augmented reality applications. 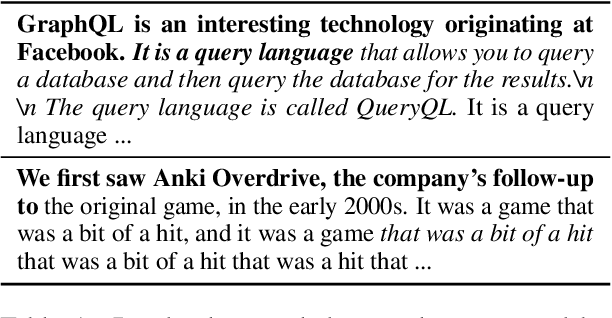 
* Accepted by BlackBoxNLP at EMNLP 2021 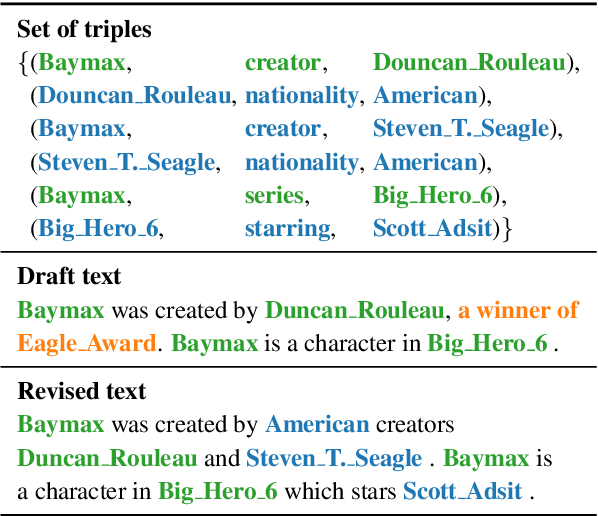 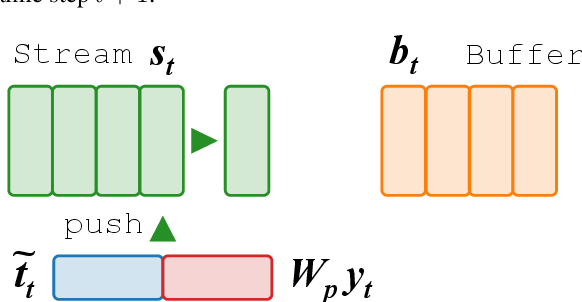 We propose a novel text editing task, referred to as \textit{fact-based text editing}, in which the goal is to revise a given document to better describe the facts in a knowledge base (e.g., several triples). The task is important in practice because reflecting the truth is a common requirement in text editing. First, we propose a method for automatically generating a dataset for research on fact-based text editing, where each instance consists of a draft text, a revised text, and several facts represented in triples. We apply the method into two public table-to-text datasets, obtaining two new datasets consisting of 233k and 37k instances, respectively. Next, we propose a new neural network architecture for fact-based text editing, called \textsc{FactEditor}, which edits a draft text by referring to given facts using a buffer, a stream, and a memory. A straightforward approach to address the problem would be to employ an encoder-decoder model. Our experimental results on the two datasets show that \textsc{FactEditor} outperforms the encoder-decoder approach in terms of fidelity and fluency. The results also show that \textsc{FactEditor} conducts inference faster than the encoder-decoder approach.

On consistency scores in text data with an implementation in R

In this paper, we introduce a reproducible cleaning process for the text extracted from PDFs using n-gram models. Our approach compares the originally extracted text with the text generated from, or expected by, these models using earlier text as stimulus. To guide this process, we introduce the notion of a consistency score, which refers to the proportion of text that is expected by the model. This is used to monitor changes during the cleaning process, and across different corpuses. We illustrate our process on text from the book Jane Eyre and introduce both a Shiny application and an R package to make our process easier for others to adopt. 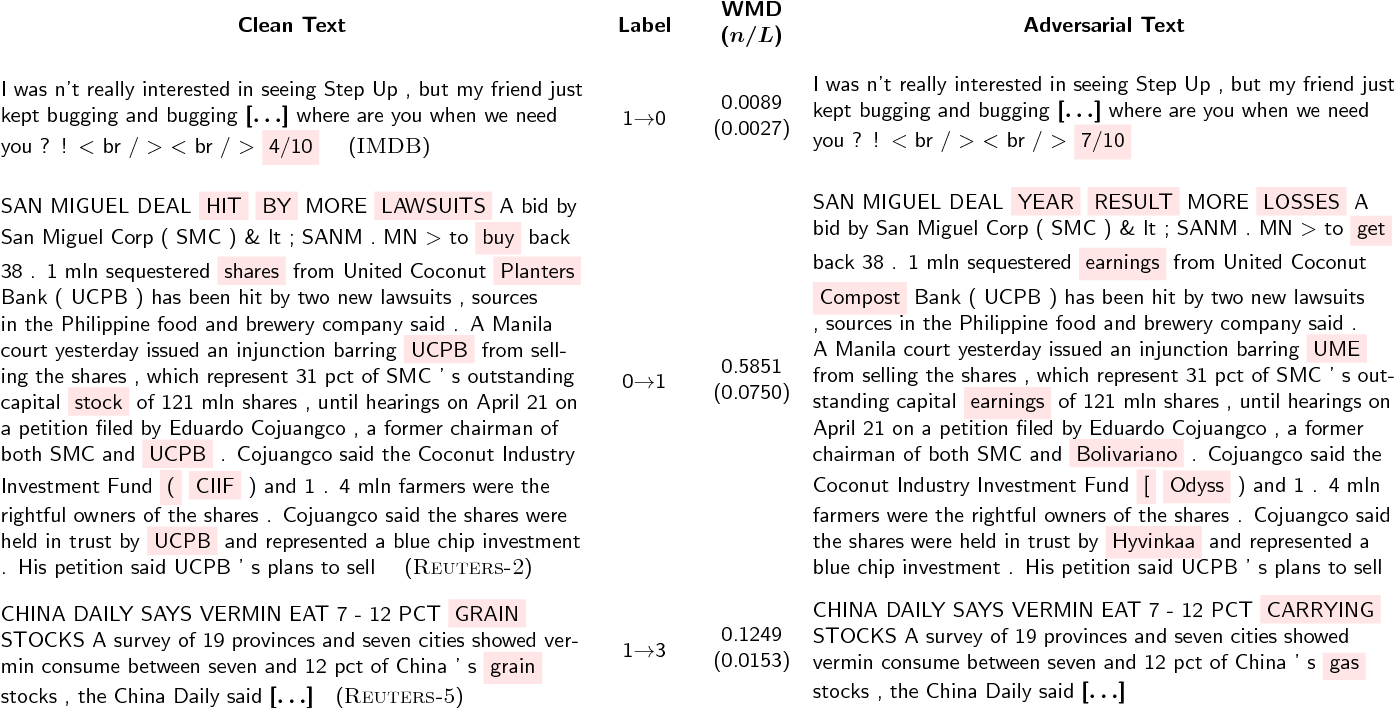 Adversarial samples for images have been extensively studied in the literature. Among many of the attacking methods, gradient-based methods are both effective and easy to compute. In this work, we propose a framework to adapt the gradient attacking methods on images to text domain. The main difficulties for generating adversarial texts with gradient methods are i) the input space is discrete, which makes it difficult to accumulate small noise directly in the inputs, and ii) the measurement of the quality of the adversarial texts is difficult. We tackle the first problem by searching for adversarials in the embedding space and then reconstruct the adversarial texts via nearest neighbor search. For the latter problem, we employ the Word Mover's Distance (WMD) to quantify the quality of adversarial texts. Through extensive experiments on three datasets, IMDB movie reviews, Reuters-2 and Reuters-5 newswires, we show that our framework can leverage gradient attacking methods to generate very high-quality adversarial texts that are only a few words different from the original texts. There are many cases where we can change one word to alter the label of the whole piece of text. We successfully incorporate FGM and DeepFool into our framework. In addition, we empirically show that WMD is closely related to the quality of adversarial texts.


* This work lacks some crucial details. After careful discussion, we decided to withdraw it temporarily and resubmit a full version afterward

Beyond Visual Semantics: Exploring the Role of Scene Text in Image Understanding 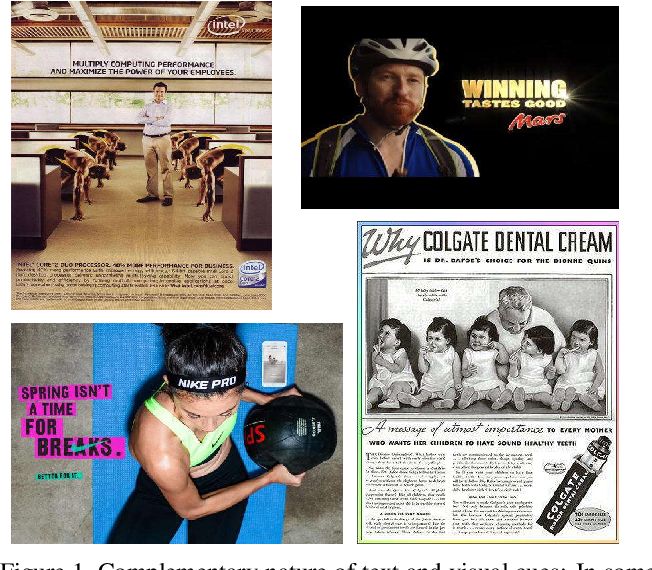 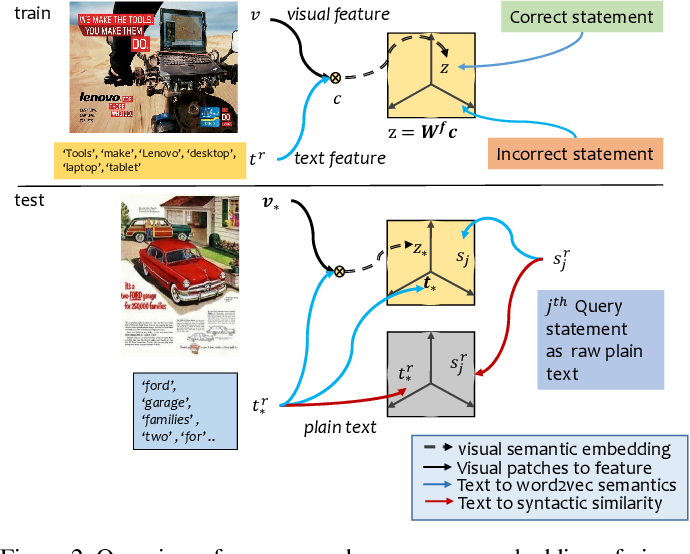 Images with visual and scene text content are ubiquitous in everyday life. However current image interpretation systems are mostly limited to using only the visual features, neglecting to leverage the scene text content. In this paper we propose to jointly use scene text and visual channels for robust semantic interpretation of images. We undertake the task of matching Advertisement images against their human generated statements that describe the action that the ad prompts and the rationale it provides for taking this action. We extract the scene text and generate semantic and lexical text representations, which are used in the interpretation of the Ad Image. To deal with irrelevant or erroneous detection of scene text, we use a text attention scheme. We also learn an embedding of the visual channel,\ie visual features based on detected symbolism and objects, into a semantic embedding space, leveraging text semantics obtained from scene text. We show how the multi channel approach, involving visual semantics and scene text, improves upon the current state of the art. 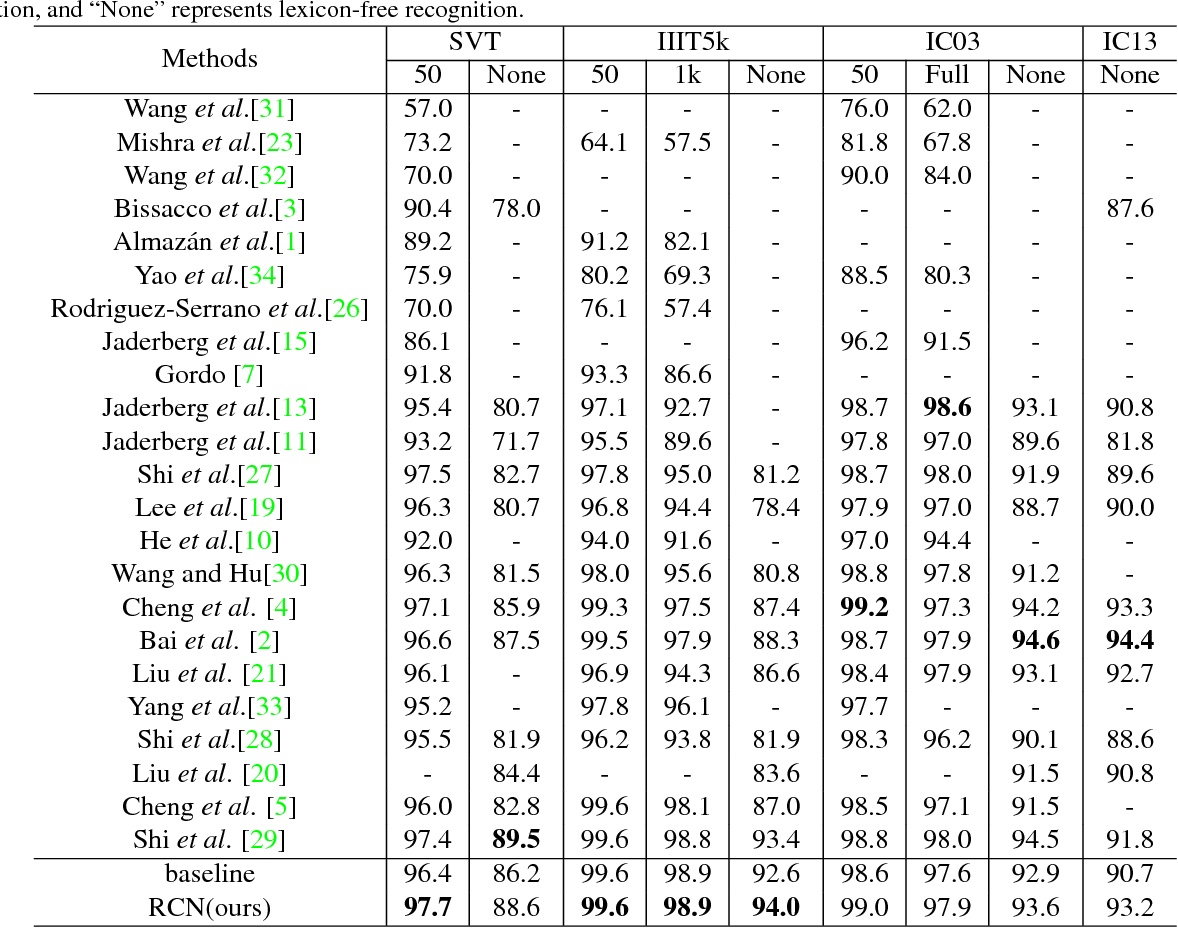 Scene text recognition has received increased attention in the research community. Text in the wild often possesses irregular arrangements, typically including perspective text, curved text, oriented text. Most existing methods are hard to work well for irregular text, especially for severely distorted text. In this paper, we propose a novel Recurrent Calibration Network (RCN) for irregular scene text recognition. The RCN progressively calibrates the irregular text to boost the recognition performance. By decomposing the calibration process into multiple steps, the irregular text can be calibrated to normal one step by step. Besides, in order to avoid the accumulation of lost information caused by inaccurate transformation, we further design a fiducial-point refinement structure to keep the integrity of text during the recurrent process. Instead of the calibrated images, the coordinates of fiducial points are tracked and refined, which implicitly models the transformation information. Based on the refined fiducial points, we estimate the transformation parameters and sample from the original image at each step. In this way, the original character information is preserved until the final transformation. Such designs lead to optimal calibration results to boost the performance of succeeding recognition. Extensive experiments on challenging datasets demonstrate the superiority of our method, especially on irregular benchmarks. 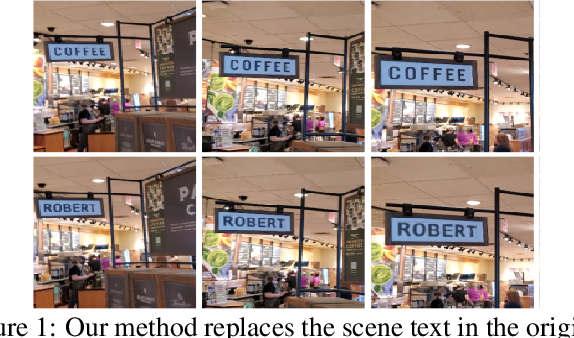 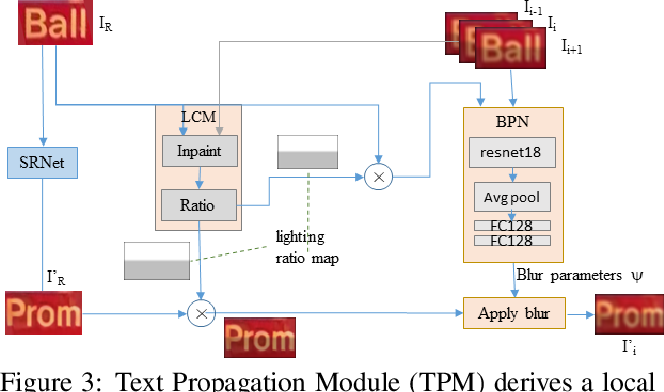 We propose replacing scene text in videos using deep style transfer and learned photometric transformations.Building on recent progress on still image text replacement,we present extensions that alter text while preserving the appearance and motion characteristics of the original video.Compared to the problem of still image text replacement,our method addresses additional challenges introduced by video, namely effects induced by changing lighting, motion blur, diverse variations in camera-object pose over time,and preservation of temporal consistency. We parse the problem into three steps. First, the text in all frames is normalized to a frontal pose using a spatio-temporal trans-former network. Second, the text is replaced in a single reference frame using a state-of-art still-image text replacement method. Finally, the new text is transferred from the reference to remaining frames using a novel learned image transformation network that captures lighting and blur effects in a temporally consistent manner. Results on synthetic and challenging real videos show realistic text trans-fer, competitive quantitative and qualitative performance,and superior inference speed relative to alternatives. We introduce new synthetic and real-world datasets with paired text objects. To the best of our knowledge this is the first attempt at deep video text replacement.

MOST: A Multi-Oriented Scene Text Detector with Localization Refinement 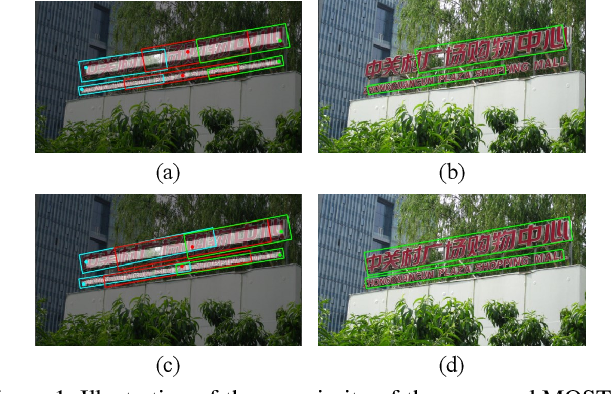 Over the past few years, the field of scene text detection has progressed rapidly that modern text detectors are able to hunt text in various challenging scenarios. However, they might still fall short when handling text instances of extreme aspect ratios and varying scales. To tackle such difficulties, we propose in this paper a new algorithm for scene text detection, which puts forward a set of strategies to significantly improve the quality of text localization. Specifically, a Text Feature Alignment Module (TFAM) is proposed to dynamically adjust the receptive fields of features based on initial raw detections; a Position-Aware Non-Maximum Suppression (PA-NMS) module is devised to selectively concentrate on reliable raw detections and exclude unreliable ones; besides, we propose an Instance-wise IoU loss for balanced training to deal with text instances of different scales. An extensive ablation study demonstrates the effectiveness and superiority of the proposed strategies. The resulting text detection system, which integrates the proposed strategies with a leading scene text detector EAST, achieves state-of-the-art or competitive performance on various standard benchmarks for text detection while keeping a fast running speed. 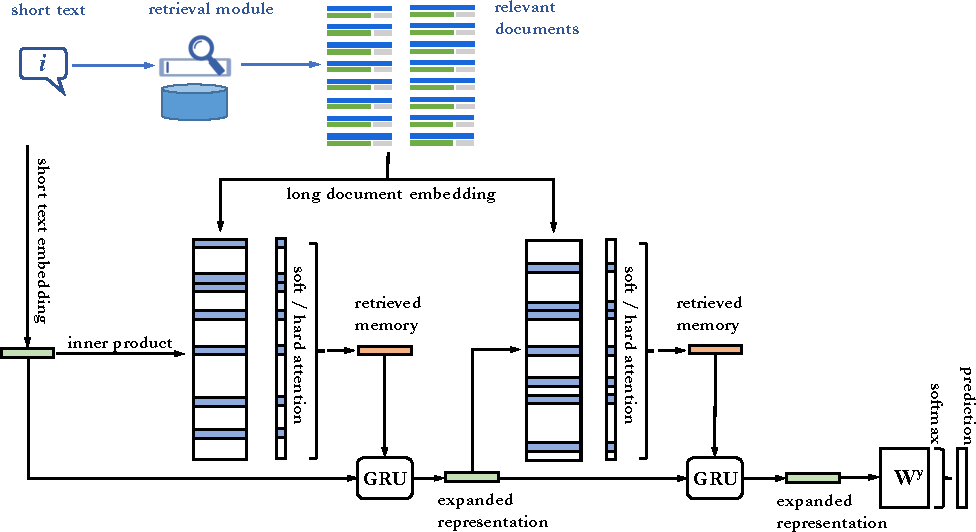 Effectively making sense of short texts is a critical task for many real world applications such as search engines, social media services, and recommender systems. The task is particularly challenging as a short text contains very sparse information, often too sparse for a machine learning algorithm to pick up useful signals. A common practice for analyzing short text is to first expand it with external information, which is usually harvested from a large collection of longer texts. In literature, short text expansion has been done with all kinds of heuristics. We propose an end-to-end solution that automatically learns how to expand short text to optimize a given learning task. A novel deep memory network is proposed to automatically find relevant information from a collection of longer documents and reformulate the short text through a gating mechanism. Using short text classification as a demonstrating task, we show that the deep memory network significantly outperforms classical text expansion methods with comprehensive experiments on real world data sets.