Can you hear me $\textit{now}$? Sensitive comparisons of human and machine perception 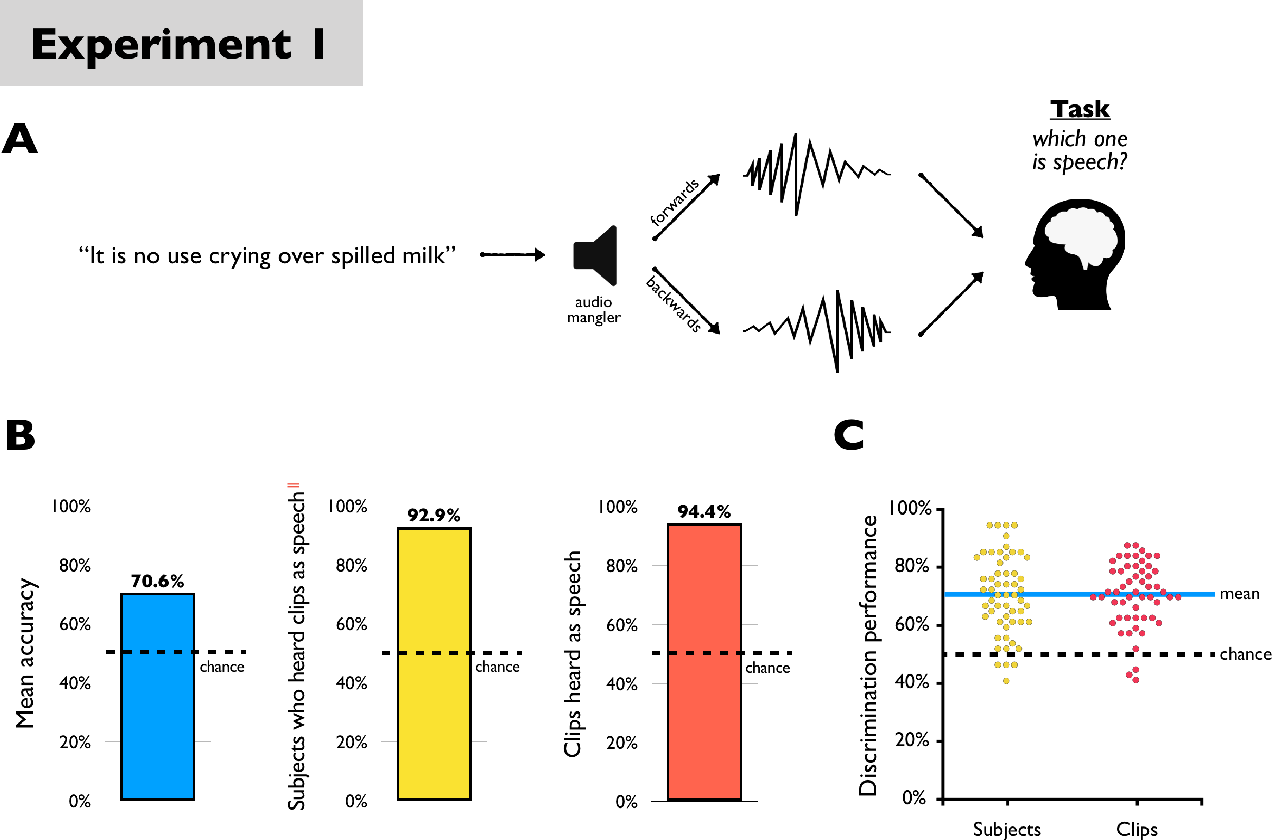 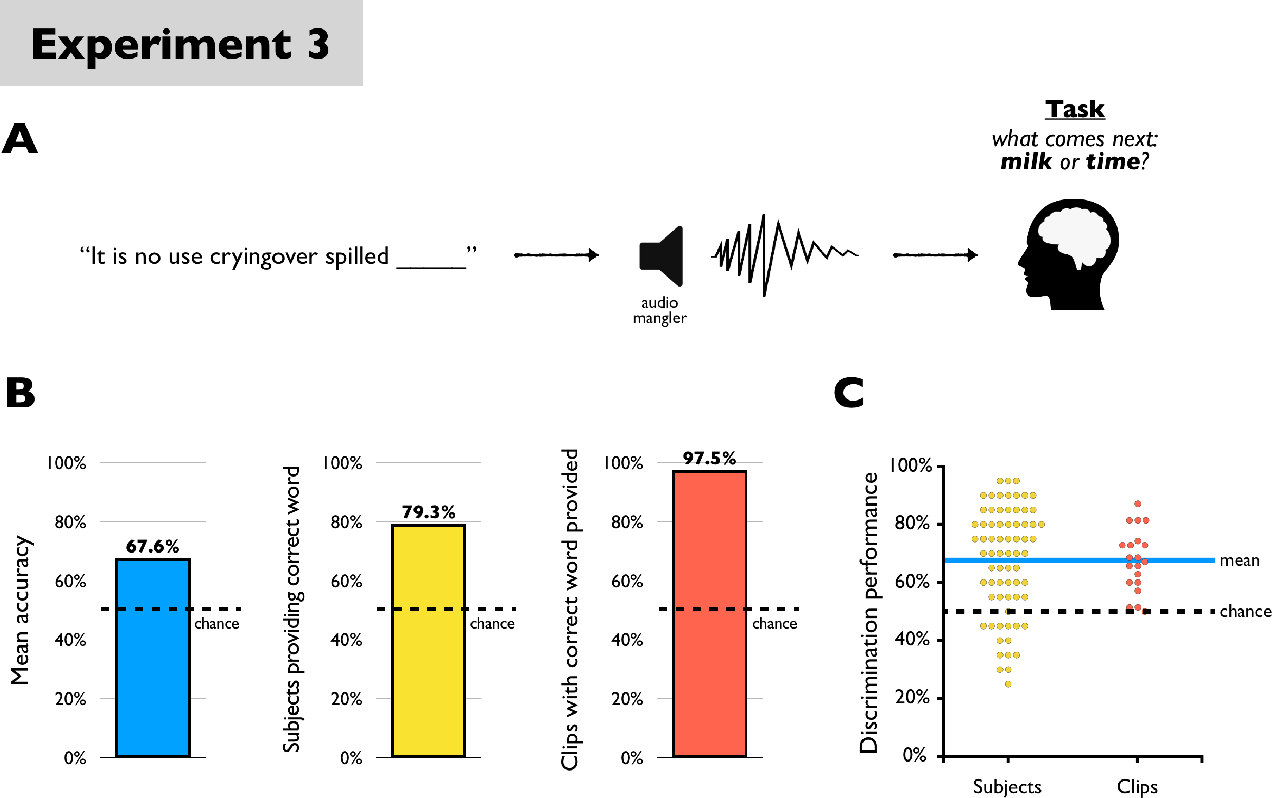 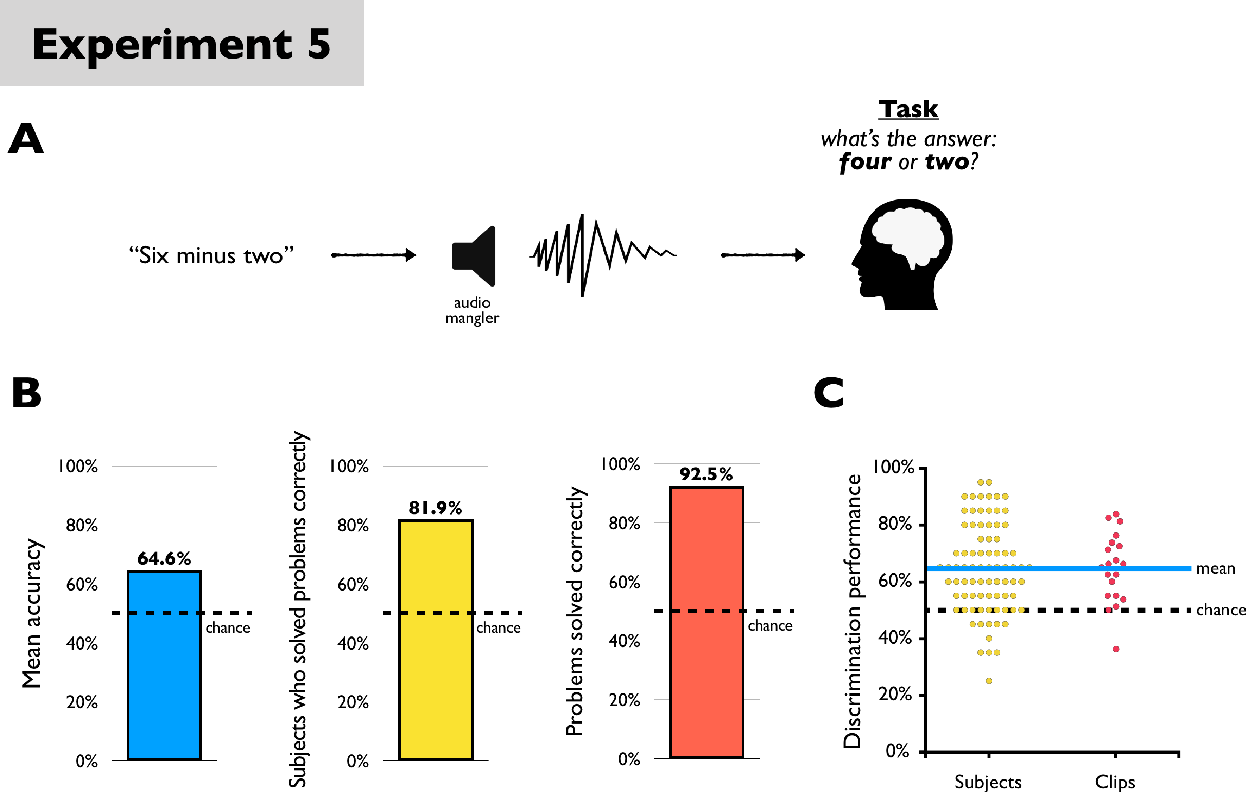 The rise of sophisticated machine-recognition systems has brought with it a rise in comparisons between human and machine perception. But such comparisons face an asymmetry: Whereas machine perception of some stimulus can often be probed through direct and explicit measures, much of human perceptual knowledge is latent, incomplete, or embedded in unconscious mental processes that may not be available for explicit report. Here, we show how this asymmetry can cause such comparisons to underestimate the overlap in human and machine perception. As a case study, we consider human perception of $\textit{adversarial speech}$ -- synthetic audio commands that are recognized as valid messages by automated speech-recognition systems but that human listeners reportedly hear as meaningless noise. In five experiments, we adapt task designs from the human psychophysics literature to show that even when subjects cannot freely transcribe adversarial speech (the previous benchmark for human understanding), they nevertheless $\textit{can}$ discriminate adversarial speech from closely matched non-speech (Experiments 1-2), finish common phrases begun in adversarial speech (Experiments 3-4), and solve simple math problems posed in adversarial speech (Experiment 5) -- even for stimuli previously described as "unintelligible to human listeners". We recommend the adoption of $\textit{sensitive tests}$ of human and machine perception, and discuss the broader consequences of this approach for comparing natural and artificial intelligence. 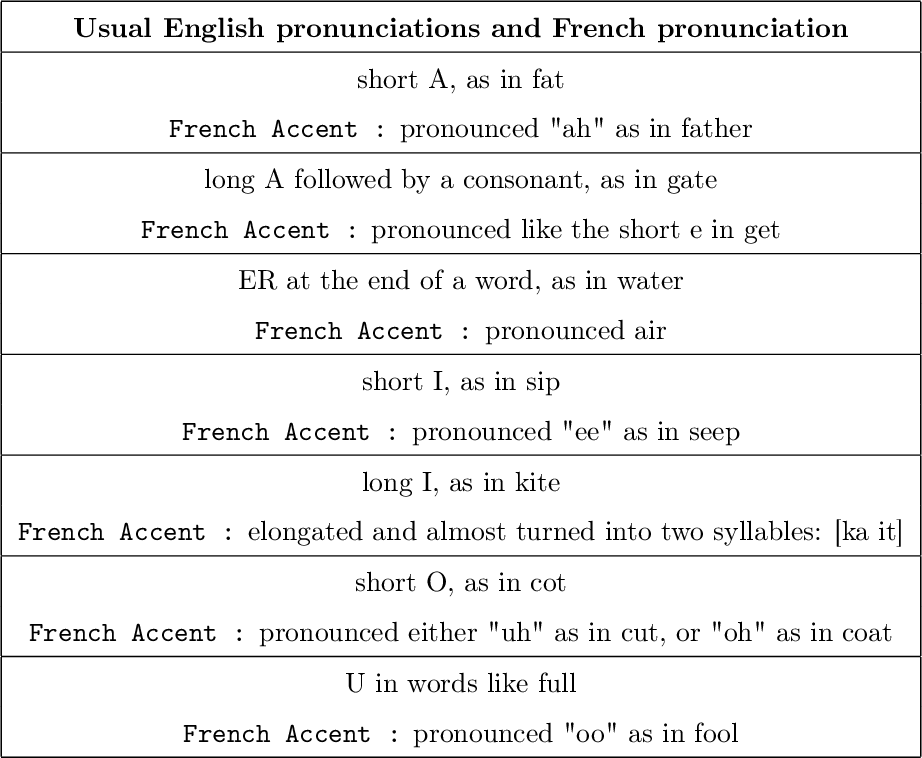 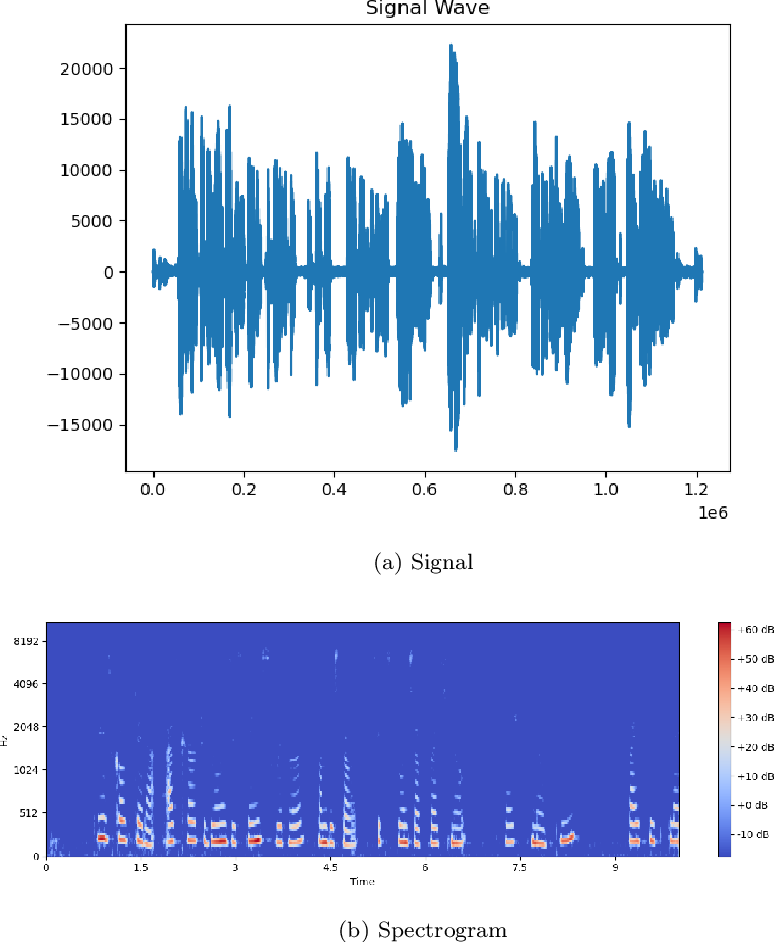 Speech recognition systems have made tremendous progress since the last few decades. They have developed significantly in identifying the speech of the speaker. However, there is a scope of improvement in speech recognition systems in identifying the nuances and accents of a speaker. It is known that any specific natural language may possess at least one accent. Despite the identical word phonemic composition, if it is pronounced in different accents, we will have sound waves, which are different from each other. Differences in pronunciation, in accent and intonation of speech in general, create one of the most common problems of speech recognition. If there are a lot of accents in language we should create the acoustic model for each separately. We carry out a systematic analysis of the problem in the accurate classification of accents. We use traditional machine learning techniques and convolutional neural networks, and show that the classical techniques are not sufficiently efficient to solve this problem. Using spectrograms of speech signals, we propose a multi-class classification framework for accent recognition. In this paper, we focus our attention on the French accent. We also identify its limitation by understanding the impact of French idiosyncrasies on its spectrograms. 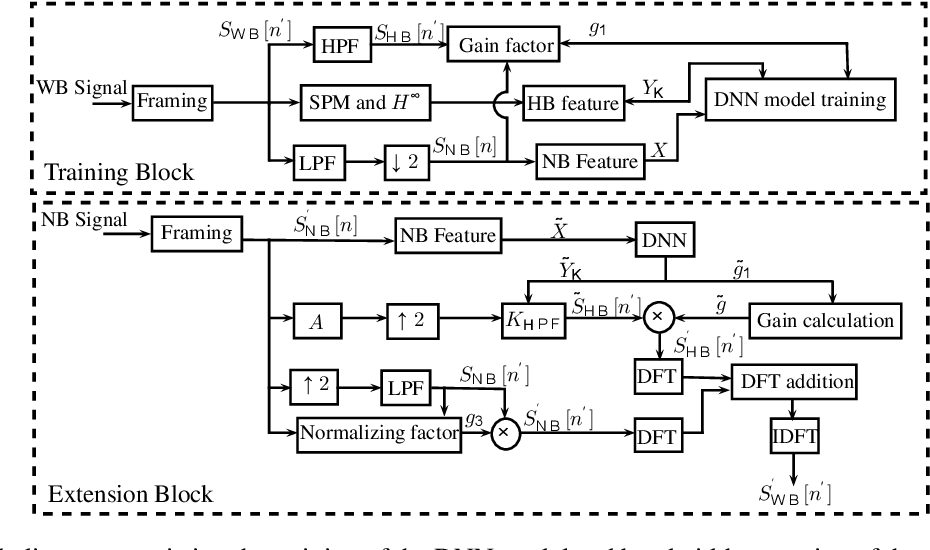 Artificial bandwidth extension is applied to speech signals to improve their quality in narrowband telephonic communication. For accomplishing this, the missing high-frequency (high-band) components of speech signals are recovered by utilizing a new extrapolation process based on sampled-data control theory and deep neural network (DNN). The $H^\infty$ sampled-data control theory helps in designing of a high-band filter to recover the high-frequency signals by optimally utilizing the inter-sample signals. Non-stationary (time-varying) characteristics of speech signals forces to use numerous high-band filters. Hence, we use a deep neural network for estimating the high-band filter information and a gain factor for a specified narrowband information of the unseen signal. The objective analysis is done on the TIMIT dataset and RSR15 dataset. Additionally, the objective analysis is performed separately for the voiced speech as well as for the unvoiced speech as generally needed in speech processing. Subjective analysis is done on the RSR15 dataset. 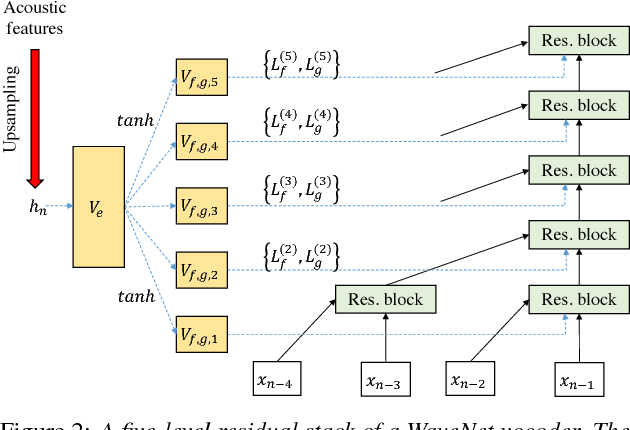 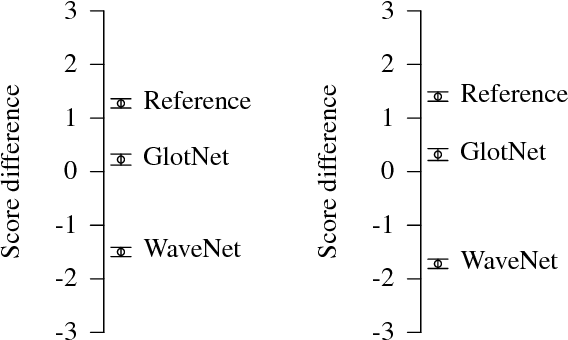 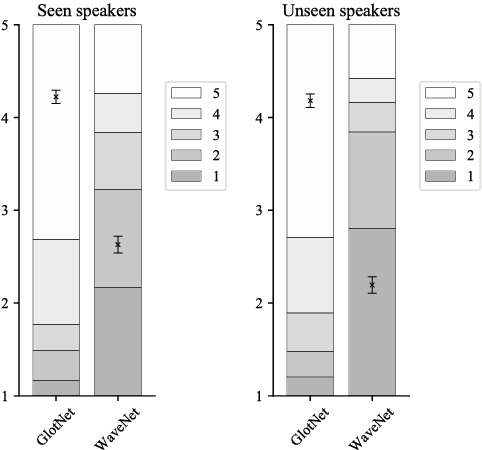 Recent speech technology research has seen a growing interest in using WaveNets as statistical vocoders, i.e., generating speech waveforms from acoustic features. These models have been shown to improve the generated speech quality over classical vocoders in many tasks, such as text-to-speech synthesis and voice conversion. Furthermore, conditioning WaveNets with acoustic features allows sharing the waveform generator model across multiple speakers without additional speaker codes. However, multi-speaker WaveNet models require large amounts of training data and computation to cover the entire acoustic space. This paper proposes leveraging the source-filter model of speech production to more effectively train a speaker-independent waveform generator with limited resources. We present a multi-speaker 'GlotNet' vocoder, which utilizes a WaveNet to generate glottal excitation waveforms, which are then used to excite the corresponding vocal tract filter to produce speech. Listening tests show that the proposed model performs favourably to a direct WaveNet vocoder trained with the same model architecture and data.

Wav2Vec2.0 on the Edge: Performance Evaluation

Wav2Vec2.0 is a state-of-the-art model which learns speech representations through unlabeled speech data, aka, self supervised learning. The pretrained model is then fine tuned on small amounts of labeled data to use it for speech-to-text and machine translation tasks. Wav2Vec 2.0 is a transformative solution for low resource languages as it is mainly developed using unlabeled audio data. Getting large amounts of labeled data is resource intensive and especially challenging to do for low resource languages such as Swahilli, Tatar, etc. Furthermore, Wav2Vec2.0 word-error-rate(WER) matches or surpasses the very recent supervised learning algorithms while using 100x less labeled data. Given its importance and enormous potential in enabling speech based tasks on world's 7000 languages, it is key to evaluate the accuracy, latency and efficiency of this model on low resource and low power edge devices and investigate the feasibility of using it in such devices for private, secure and reliable speech based tasks. On-device speech tasks preclude sending audio data to the server hence inherently providing privacy, reduced latency and enhanced reliability. In this paper, Wav2Vec2.0 model's accuracy and latency has been evaluated on Raspberry Pi along with the KenLM language model for speech recognition tasks. How to tune certain parameters to achieve desired level of WER rate and latency while meeting the CPU, memory and energy budgets of the product has been discussed. 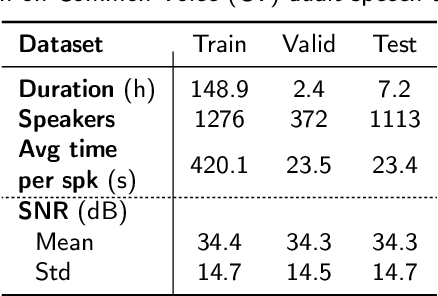 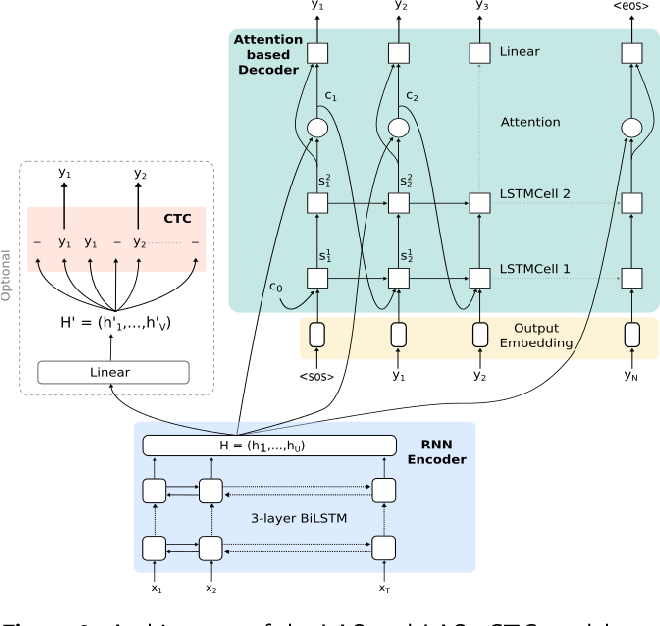 Automatic recognition systems for child speech are lagging behind those dedicated to adult speech in the race of performance. This phenomenon is due to the high acoustic and linguistic variability present in child speech caused by their body development, as well as the lack of available child speech data. Young readers speech additionally displays peculiarities, such as slow reading rate and presence of reading mistakes, that hardens the task. This work attempts to tackle the main challenges in phone acoustic modelling for young child speech with limited data, and improve understanding of strengths and weaknesses of a wide selection of model architectures in this domain. We find that transfer learning techniques are highly efficient on end-to-end architectures for adult-to-child adaptation with a small amount of child speech data. Through transfer learning, a Transformer model complemented with a Connectionist Temporal Classification (CTC) objective function, reaches a phone error rate of 28.1%, outperforming a state-of-the-art DNN-HMM model by 6.6% relative, as well as other end-to-end architectures by more than 8.5% relative. An analysis of the models' performance on two specific reading tasks (isolated words and sentences) is provided, showing the influence of the utterance length on attention-based and CTC-based models. The Transformer+CTC model displays an ability to better detect reading mistakes made by children, that can be attributed to the CTC objective function effectively constraining the attention mechanisms to be monotonic. 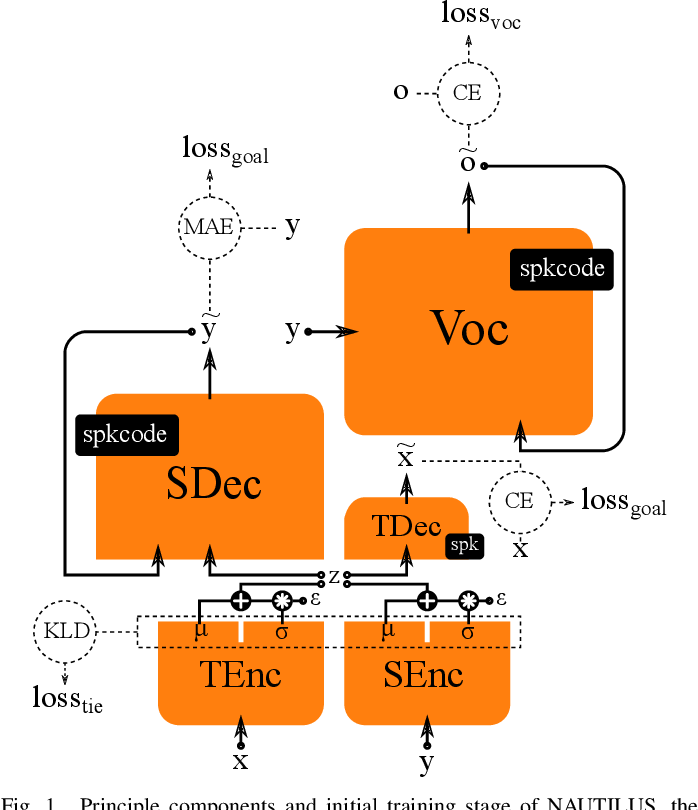 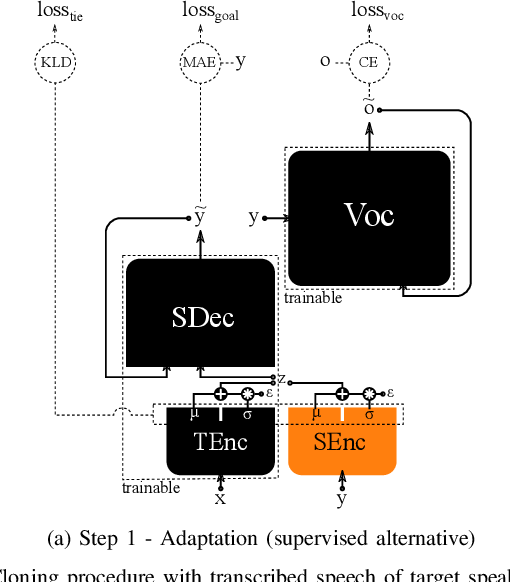 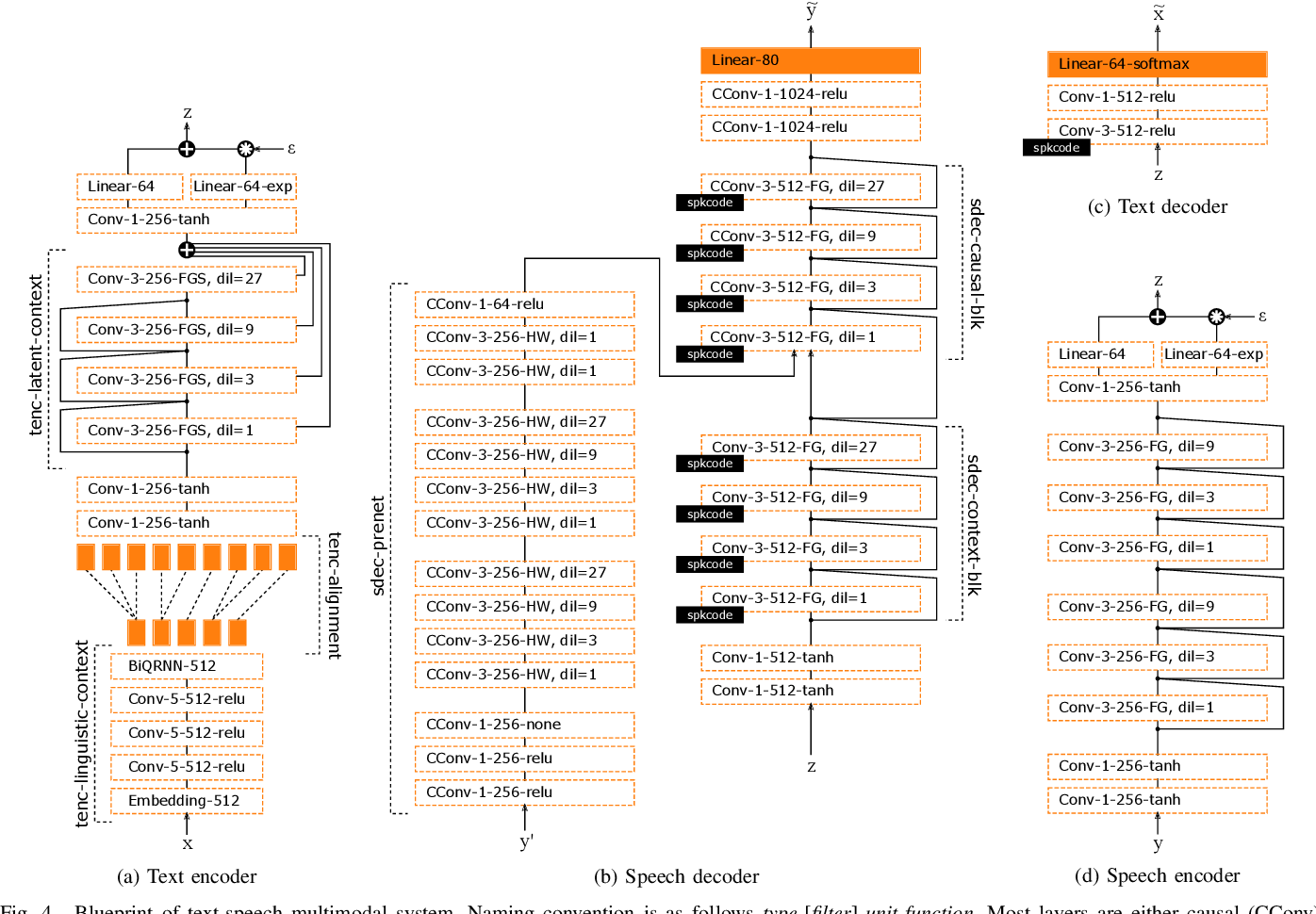 We introduce a novel speech synthesis system, called NAUTILUS, that can generate speech with a target voice either from a text input or a reference utterance of an arbitrary source speaker. By using a multi-speaker speech corpus to train all requisite encoders and decoders in the initial training stage, our system can clone unseen voices using untranscribed speech of target speakers on the basis of the backpropagation algorithm. Moreover, depending on the data circumstance of the target speaker, the cloning strategy can be adjusted to take advantage of additional data and modify the behaviors of text-to-speech (TTS) and/or voice conversion (VC) systems to accommodate the situation. We test the performance of the proposed framework by using deep convolution layers to model the encoders, decoders and WaveNet vocoder. Evaluations show that it achieves comparable quality with state-of-the-art TTS and VC systems when cloning with just five minutes of untranscribed speech. Moreover, it is demonstrated that the proposed framework has the ability to switch between TTS and VC with high speaker consistency, which will be useful for many applications.


* Submitted to The IEEE/ACM Transactions on Audio, Speech, and Language Processing 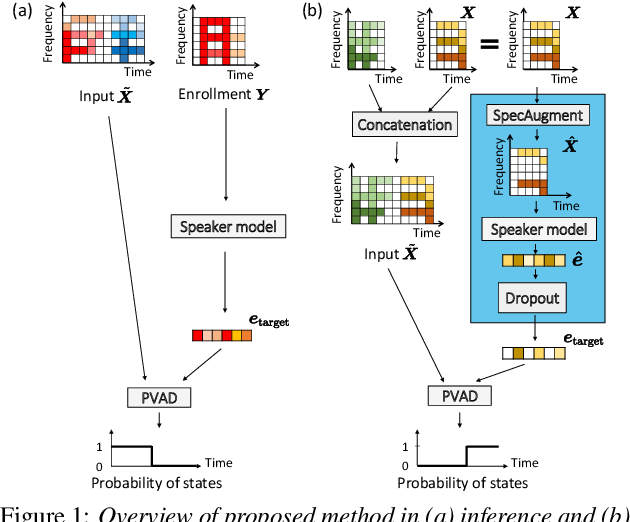 We present a novel personalized voice activity detection (PVAD) learning method that does not require enrollment data during training. PVAD is a task to detect the speech segments of a specific target speaker at the frame level using enrollment speech of the target speaker. Since PVAD must learn speakers' speech variations to clarify the boundary between speakers, studies on PVAD used large-scale datasets that contain many utterances for each speaker. However, the datasets to train a PVAD model are often limited because substantial cost is needed to prepare such a dataset. In addition, we cannot utilize the datasets used to train the standard VAD because they often lack speaker labels. To solve these problems, our key idea is to use one utterance as both a kind of enrollment speech and an input to the PVAD during training, which enables PVAD training without enrollment speech. In our proposed method, called enrollment-less training, we augment one utterance so as to create variability between the input and the enrollment speech while keeping the speaker identity, which avoids the mismatch between training and inference. Our experimental results demonstrate the efficacy of the method.

ASCEND: A Spontaneous Chinese-English Dataset for Code-switching in Multi-turn Conversation 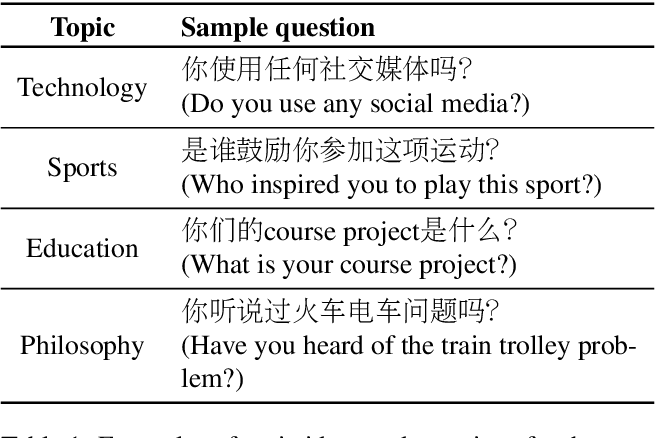 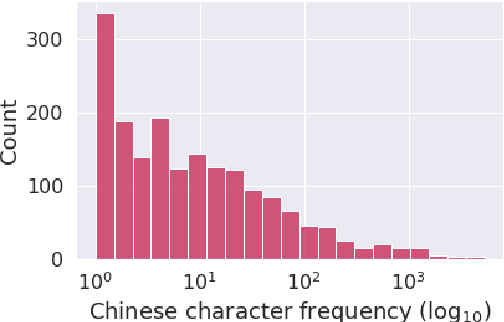