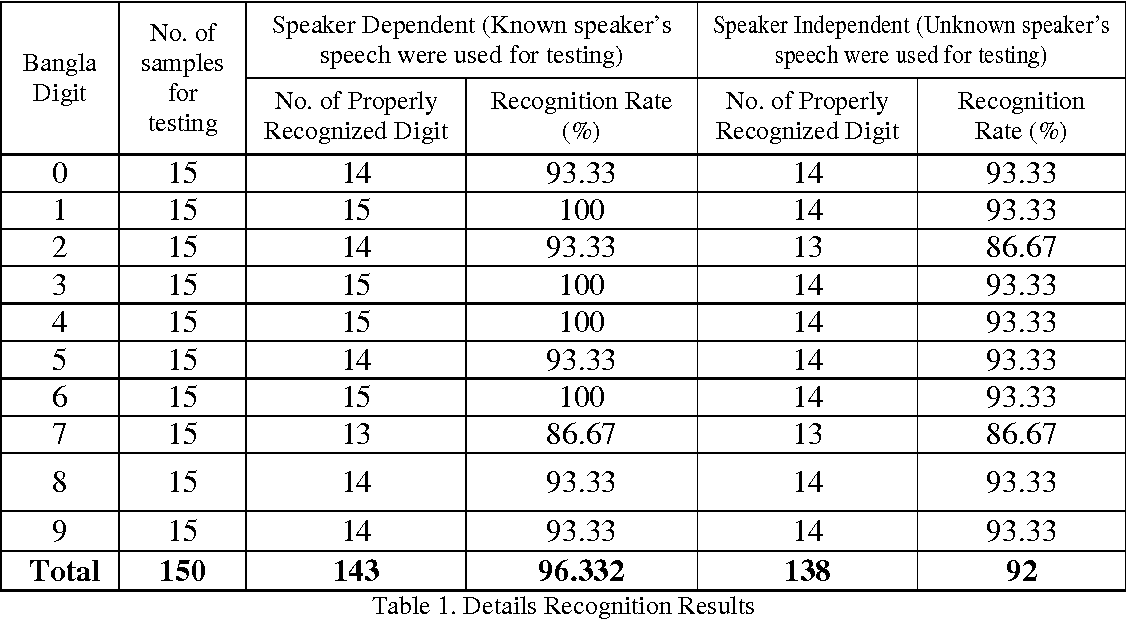 This paper is concerned with the development of Back-propagation Neural Network for Bangla Speech Recognition. In this paper, ten bangla digits were recorded from ten speakers and have been recognized. The features of these speech digits were extracted by the method of Mel Frequency Cepstral Coefficient (MFCC) analysis. The mfcc features of five speakers were used to train the network with Back propagation algorithm. The mfcc features of ten bangla digit speeches, from 0 to 9, of another five speakers were used to test the system. All the methods and algorithms used in this research were implemented using the features of Turbo C and C++ languages. From our investigation it is seen that the developed system can successfully encode and analyze the mfcc features of the speech signal to recognition. The developed system achieved recognition rate about 96.332% for known speakers (i.e., speaker dependent) and 92% for unknown speakers (i.e., speaker independent).

In this paper, we propose MixSpeech, a simple yet effective data augmentation method based on mixup for automatic speech recognition (ASR). MixSpeech trains an ASR model by taking a weighted combination of two different speech features (e.g., mel-spectrograms or MFCC) as the input, and recognizing both text sequences, where the two recognition losses use the same combination weight. We apply MixSpeech on two popular end-to-end speech recognition models including LAS (Listen, Attend and Spell) and Transformer, and conduct experiments on several low-resource datasets including TIMIT, WSJ, and HKUST. Experimental results show that MixSpeech achieves better accuracy than the baseline models without data augmentation, and outperforms a strong data augmentation method SpecAugment on these recognition tasks. Specifically, MixSpeech outperforms SpecAugment with a relative PER improvement of 10.6$\%$ on TIMIT dataset, and achieves a strong WER of 4.7$\%$ on WSJ dataset.

Loanwords, such as Anglicisms, are a challenge in German speech recognition. Due to their irregular pronunciation compared to native German words, automatically generated pronunciation dictionaries often include faulty phoneme sequences for Anglicisms. In this work, we propose a multitask sequence-to-sequence approach for grapheme-to-phoneme conversion to improve the phonetization of Anglicisms. We extended a grapheme-to-phoneme model with a classifier to distinguish Anglicisms from native German words. With this approach, the model learns to generate pronunciations differently depending on the classification result. We used our model to create supplementary Anglicism pronunciation dictionaries that are added to an existing German speech recognition model. Tested on a dedicated Anglicism evaluation set, we improved the recognition of Anglicisms compared to a baseline model, reducing the word error rate by 1 % and the Anglicism error rate by 3 %. We show that multitask learning can help solving the challenge of loanwords in German speech recognition. 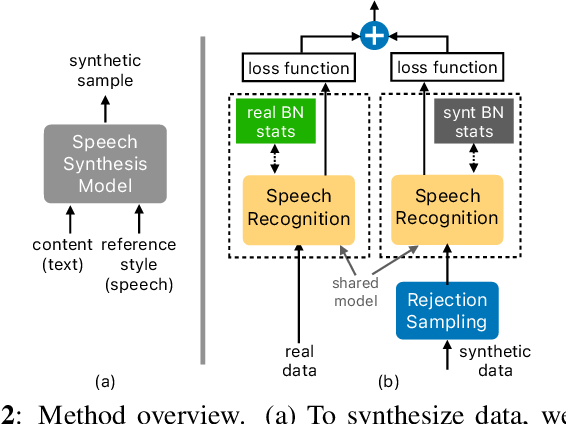 With recent advances in speech synthesis, synthetic data is becoming a viable alternative to real data for training speech recognition models. However, machine learning with synthetic data is not trivial due to the gap between the synthetic and the real data distributions. Synthetic datasets may contain artifacts that do not exist in real data such as structured noise, content errors, or unrealistic speaking styles. Moreover, the synthesis process may introduce a bias due to uneven sampling of the data manifold. We propose two novel techniques during training to mitigate the problems due to the distribution gap: (i) a rejection sampling algorithm and (ii) using separate batch normalization statistics for the real and the synthetic samples. We show that these methods significantly improve the training of speech recognition models using synthetic data. We evaluate the proposed approach on keyword detection and Automatic Speech Recognition (ASR) tasks, and observe up to 18% and 13% relative error reduction, respectively, compared to naively using the synthetic data. 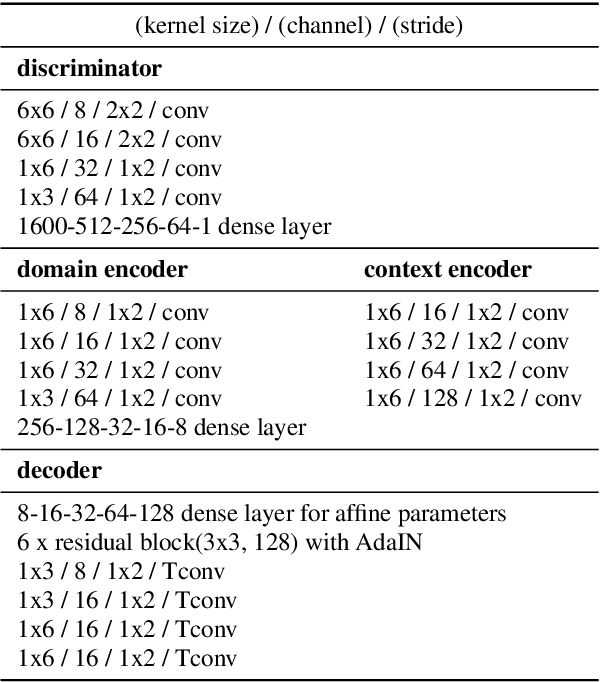 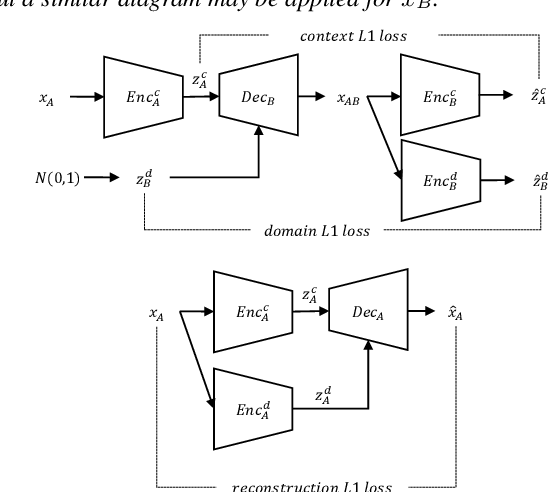 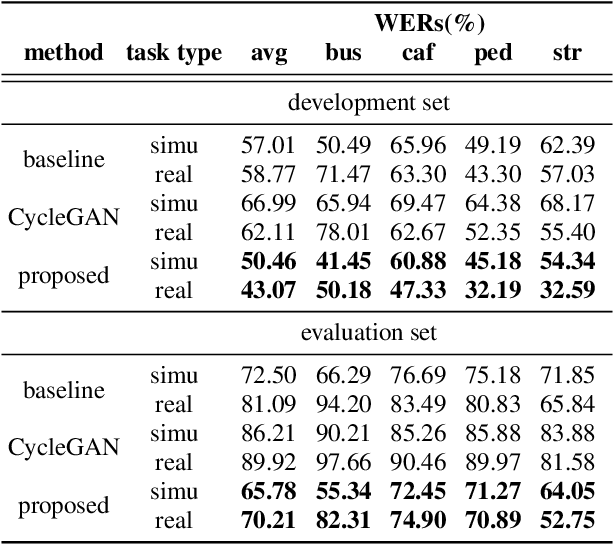 In general, the performance of automatic speech recognition (ASR) systems is significantly degraded due to the mismatch between training and test environments. Recently, a deep-learning-based image-to-image translation technique to translate an image from a source domain to a desired domain was presented, and cycle-consistent adversarial network (CycleGAN) was applied to learn a mapping for speech-to-speech conversion from a speaker to a target speaker. However, this method might not be adequate to remove corrupting noise components for robust ASR because it was designed to convert speech itself. In this paper, we propose a domain adaptation method based on generative adversarial nets (GANs) with disentangled representation learning to achieve robustness in ASR systems. In particular, two separated encoders, context and domain encoders, are introduced to learn distinct latent variables. The latent variables allow us to convert the domain of speech according to its context and domain representation. We improved word accuracies by 6.55~15.70\% for the CHiME4 challenge corpus by applying a noisy-to-clean environment adaptation for robust ASR. In addition, similar to the method based on the CycleGAN, this method can be used for gender adaptation in gender-mismatched recognition. 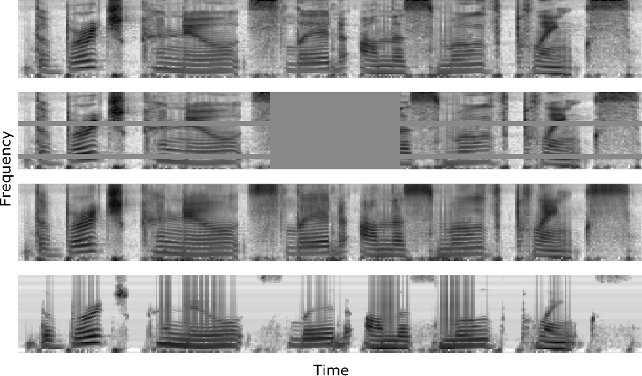 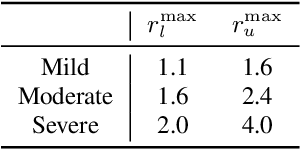 End-to-end models have achieved significant improvement on automatic speech recognition. One common method to improve performance of these models is expanding the data-space through data augmentation. Meanwhile, human auditory inspired front-ends have also demonstrated improvement for automatic speech recognisers. In this work, a well-verified auditory-based model, which can simulate various hearing abilities, is investigated for the purpose of data augmentation for end-to-end speech recognition. By introducing the auditory model into the data augmentation process, end-to-end systems are encouraged to ignore variation from the signal that cannot be heard and thereby focus on robust features for speech recognition. Two mechanisms in the auditory model, spectral smearing and loudness recruitment, are studied on the LibriSpeech dataset with a transformer-based end-to-end model. The results show that the proposed augmentation methods can bring statistically significant improvement on the performance of the state-of-the-art SpecAugment. 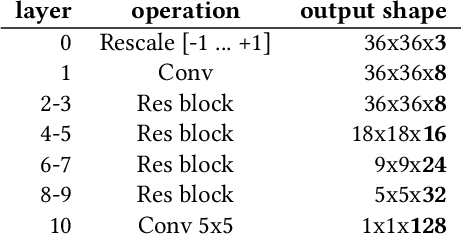 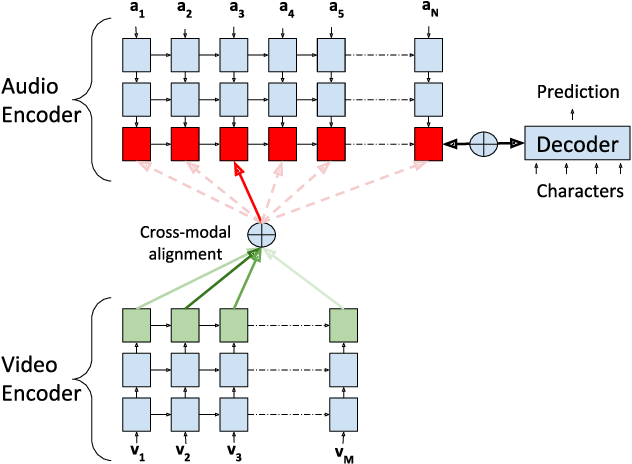 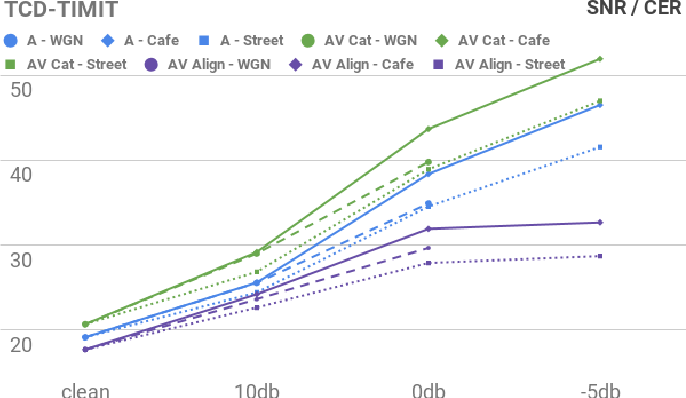 Automatic speech recognition can potentially benefit from the lip motion patterns, complementing acoustic speech to improve the overall recognition performance, particularly in noise. In this paper we propose an audio-visual fusion strategy that goes beyond simple feature concatenation and learns to automatically align the two modalities, leading to enhanced representations which increase the recognition accuracy in both clean and noisy conditions. We test our strategy on the TCD-TIMIT and LRS2 datasets, designed for large vocabulary continuous speech recognition, applying three types of noise at different power ratios. We also exploit state of the art Sequence-to-Sequence architectures, showing that our method can be easily integrated. Results show relative improvements from 7% up to 30% on TCD-TIMIT over the acoustic modality alone, depending on the acoustic noise level. We anticipate that the fusion strategy can easily generalise to many other multimodal tasks which involve correlated modalities. 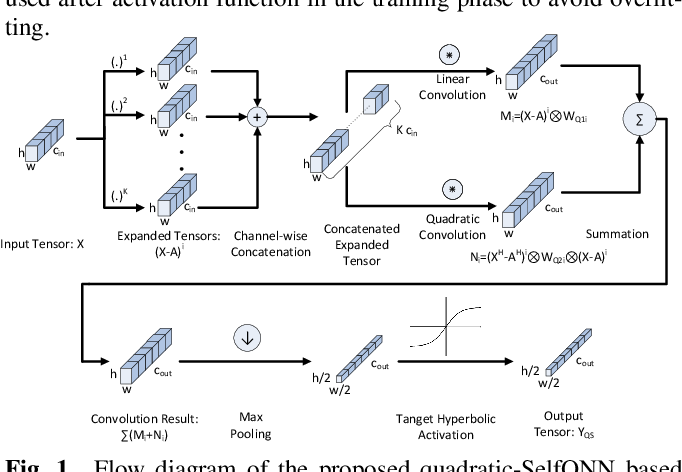 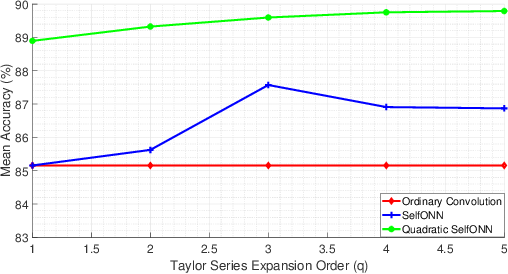 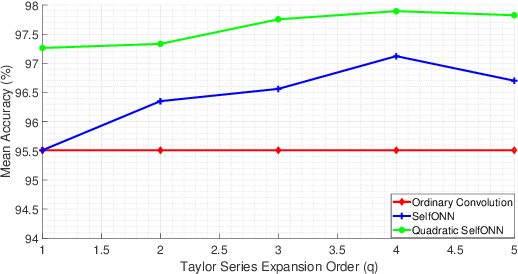 Automatic classification of speech commands has revolutionized human computer interactions in robotic applications. However, employed recognition models usually follow the methodology of deep learning with complicated networks which are memory and energy hungry. So, there is a need to either squeeze these complicated models or use more efficient light-weight models in order to be able to implement the resulting classifiers on embedded devices. In this paper, we pick the second approach and propose a network layer to enhance the speech command recognition capability of a lightweight network and demonstrate the result via experiments. The employed method borrows the ideas of Taylor expansion and quadratic forms to construct a better representation of features in both input and hidden layers. This richer representation results in recognition accuracy improvement as shown by extensive experiments on Google speech commands (GSC) and synthetic speech commands (SSC) datasets. 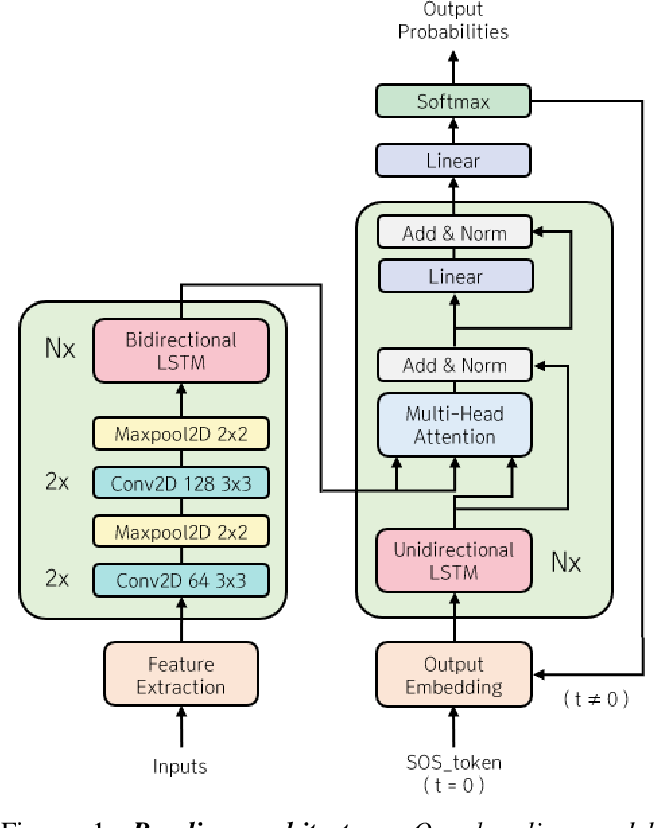 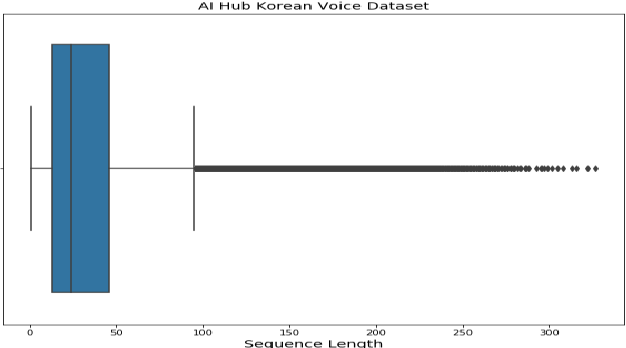 We present KoSpeech, an open-source software, which is modular and extensible end-to-end Korean automatic speech recognition (ASR) toolkit based on the deep learning library PyTorch. Several automatic speech recognition open-source toolkits have been released, but all of them deal with non-Korean languages, such as English (e.g. ESPnet, Espresso). Although AI Hub opened 1,000 hours of Korean speech corpus known as KsponSpeech, there is no established preprocessing method and baseline model to compare model performances. Therefore, we propose preprocessing methods for KsponSpeech corpus and a baseline model for benchmarks. Our baseline model is based on Listen, Attend and Spell (LAS) architecture and ables to customize various training hyperparameters conveniently. By KoSpeech, we hope this could be a guideline for those who research Korean speech recognition. Our baseline model achieved 10.31% character error rate (CER) at KsponSpeech corpus only with the acoustic model. Our source code is available here.