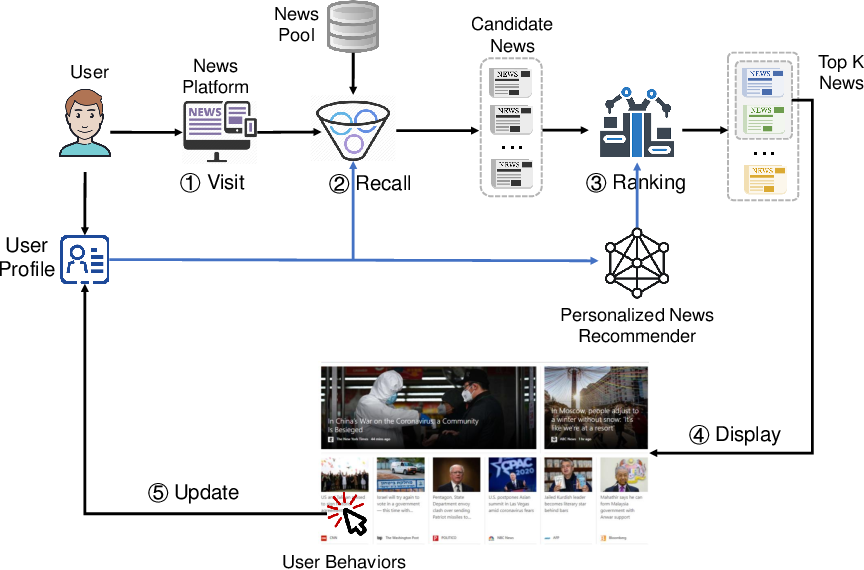 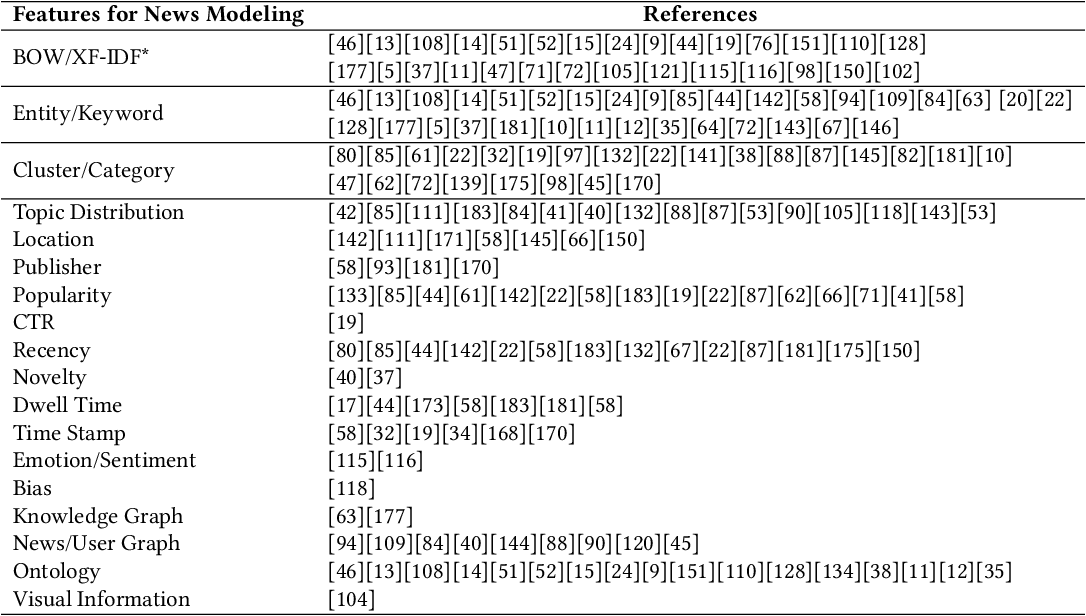 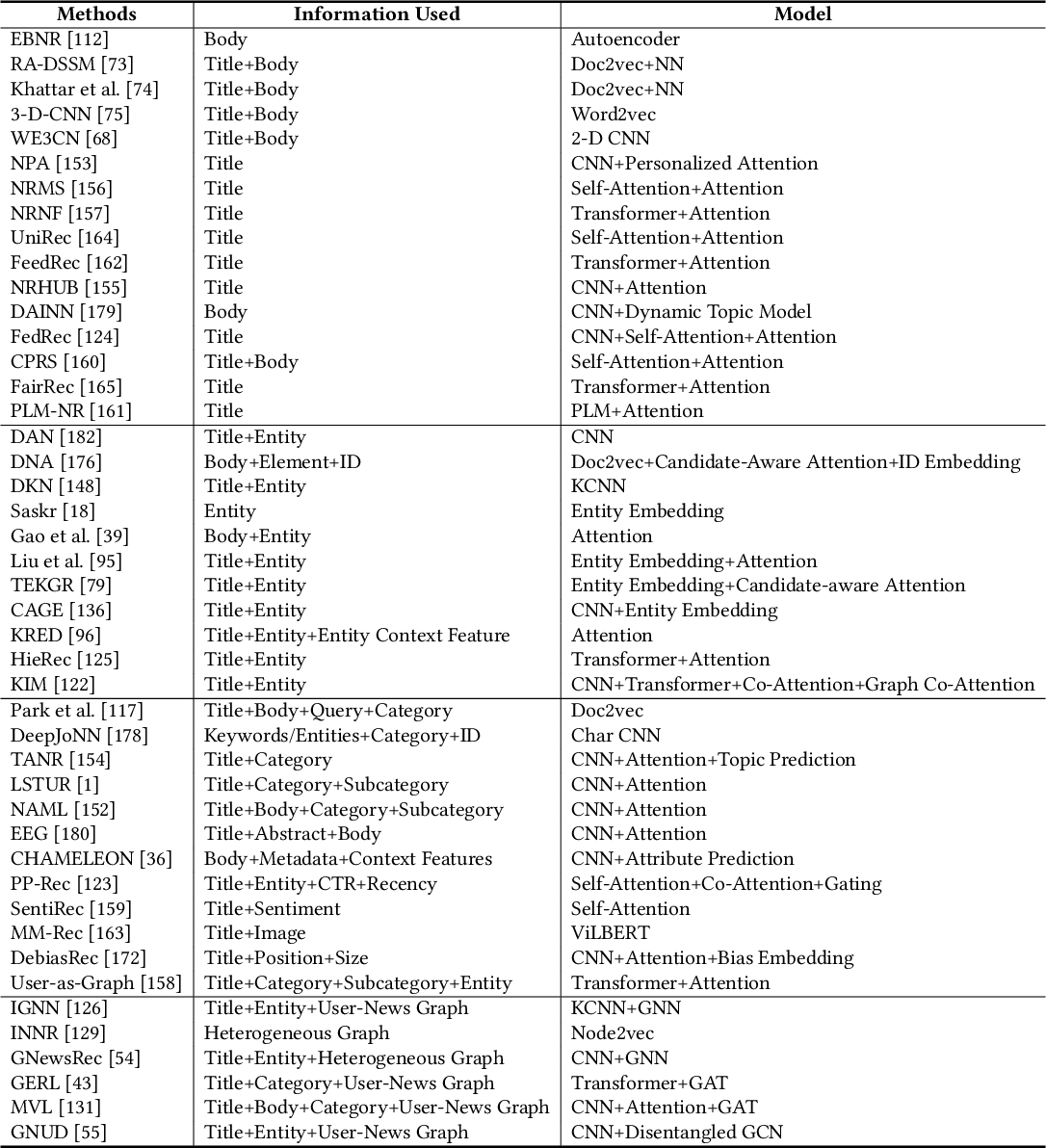 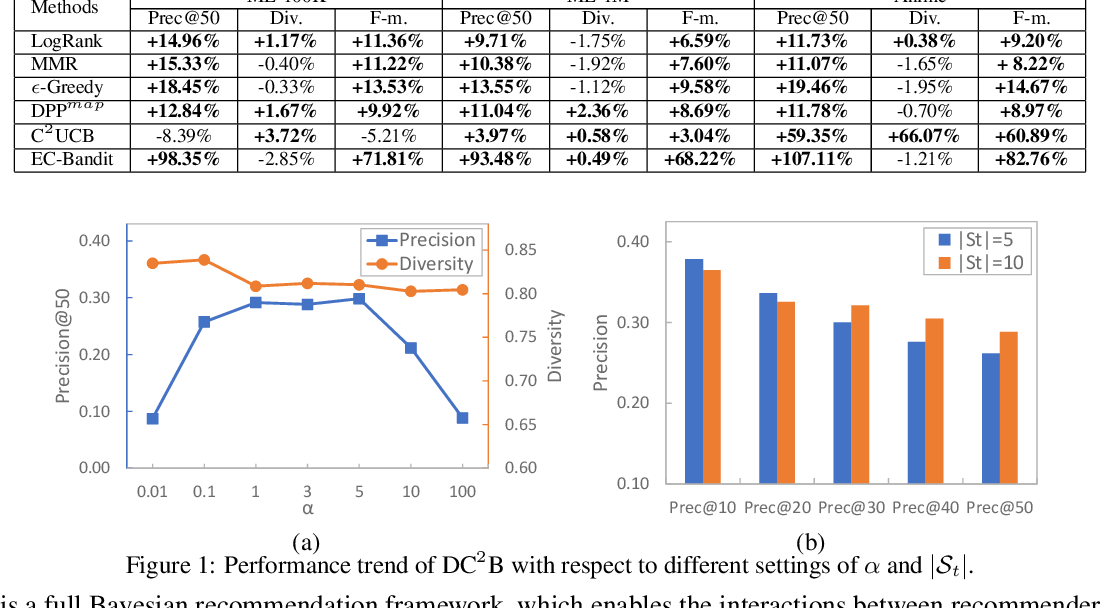 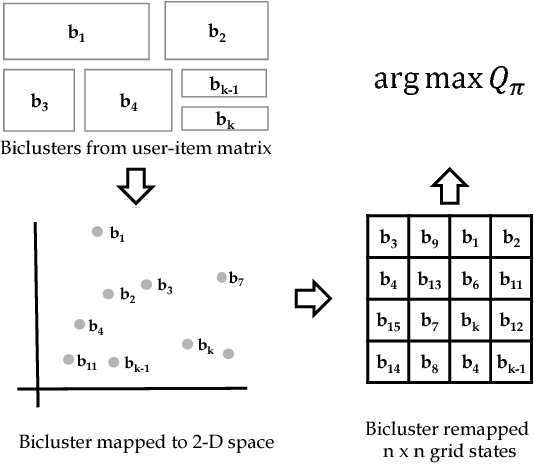 A recommender system aims to recommend items that a user is interested in among many items. The need for the recommender system has been expanded by the information explosion. Various approaches have been suggested for providing meaningful recommendations to users. One of the proposed approaches is to consider a recommender system as a Markov decision process (MDP) problem and try to solve it using reinforcement learning (RL). However, existing RL-based methods have an obvious drawback. To solve an MDP in a recommender system, they encountered a problem with the large number of discrete actions that bring RL to a larger class of problems. In this paper, we propose a novel RL-based recommender system. We formulate a recommender system as a gridworld game by using a biclustering technique that can reduce the state and action space significantly. Using biclustering not only reduces space but also improves the recommendation quality effectively handling the cold-start problem. In addition, our approach can provide users with some explanation why the system recommends certain items. Lastly, we examine the proposed algorithm on a real-world dataset and achieve a better performance than the widely used recommendation algorithm.

Fairness and Transparency in Recommendation: The Users' Perspective

A Survey on Cross-domain Recommendation: Taxonomies, Methods, and Future Directions

Towards Conversational Recommendation over Multi-Type Dialogs 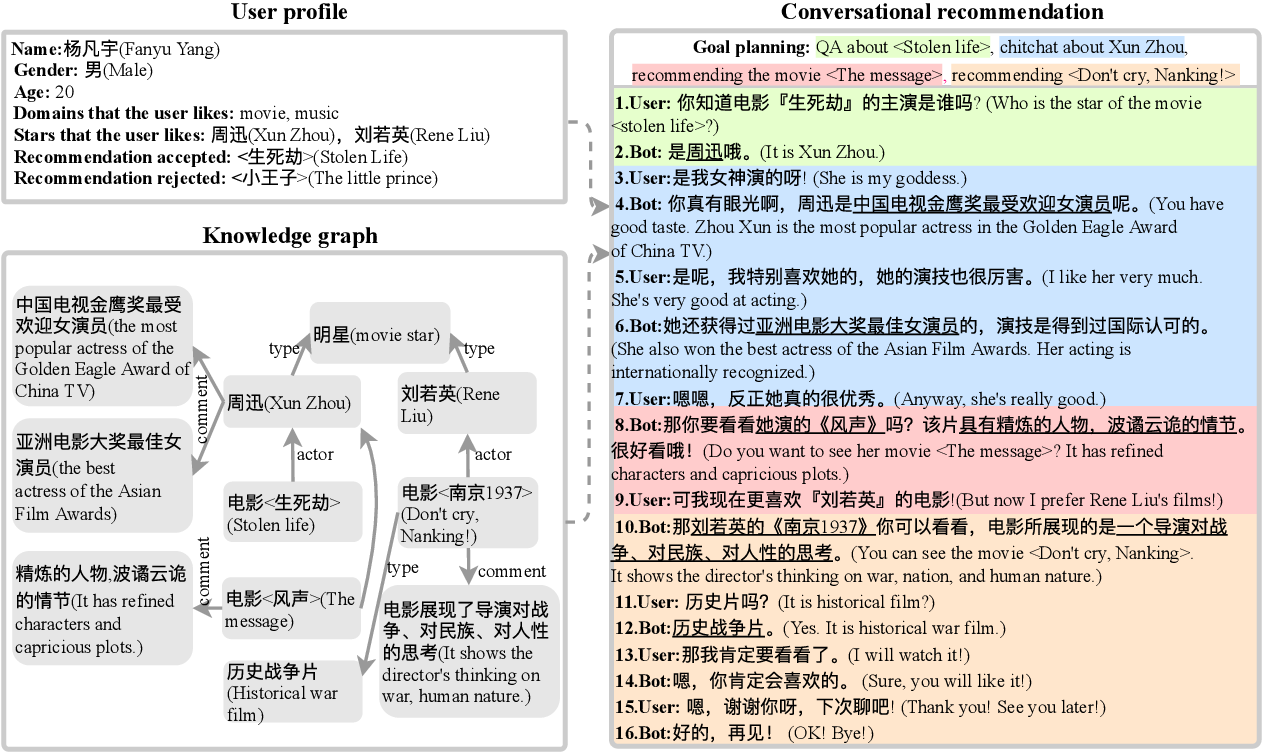 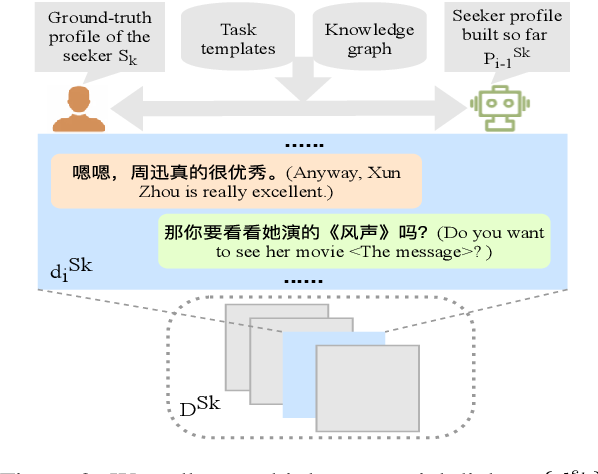 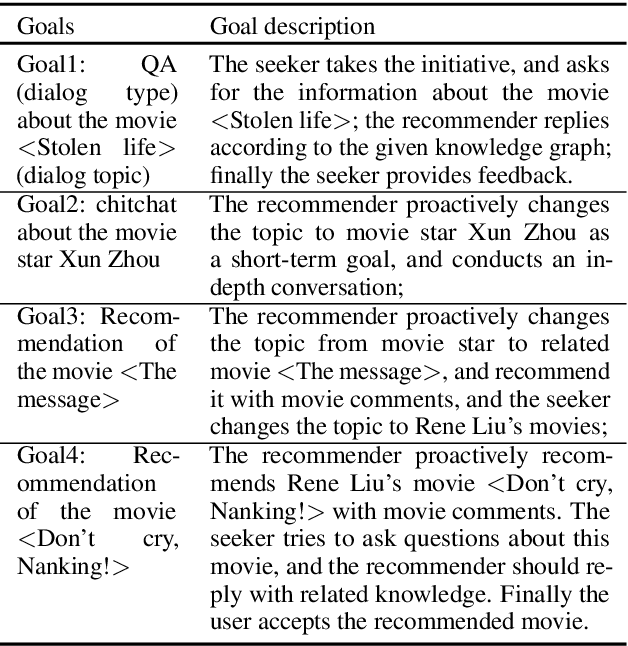 We focus on the study of conversational recommendation in the context of multi-type dialogs, where the bots can proactively and naturally lead a conversation from a non-recommendation dialog (e.g., QA) to a recommendation dialog, taking into account user's interests and feedback. To facilitate the study of this task, we create a human-to-human Chinese dialog dataset DuRecDial (about 10k dialogs, 156k utterances), where there are multiple sequential dialogs for a pair of a recommendation seeker (user) and a recommender (bot). In each dialog, the recommender proactively leads a multi-type dialog to approach recommendation targets and then makes multiple recommendations with rich interaction behavior. This dataset allows us to systematically investigate different parts of the overall problem, e.g., how to naturally lead a dialog, how to interact with users for recommendation. Finally we establish baseline results on DuRecDial for future studies. Dataset and codes are publicly available at https://github.com/PaddlePaddle/models/tree/develop/PaddleNLP/Research/ACL2020-DuRecDial.

Bridging the Gap between Conversational Reasoning and Interactive Recommendation 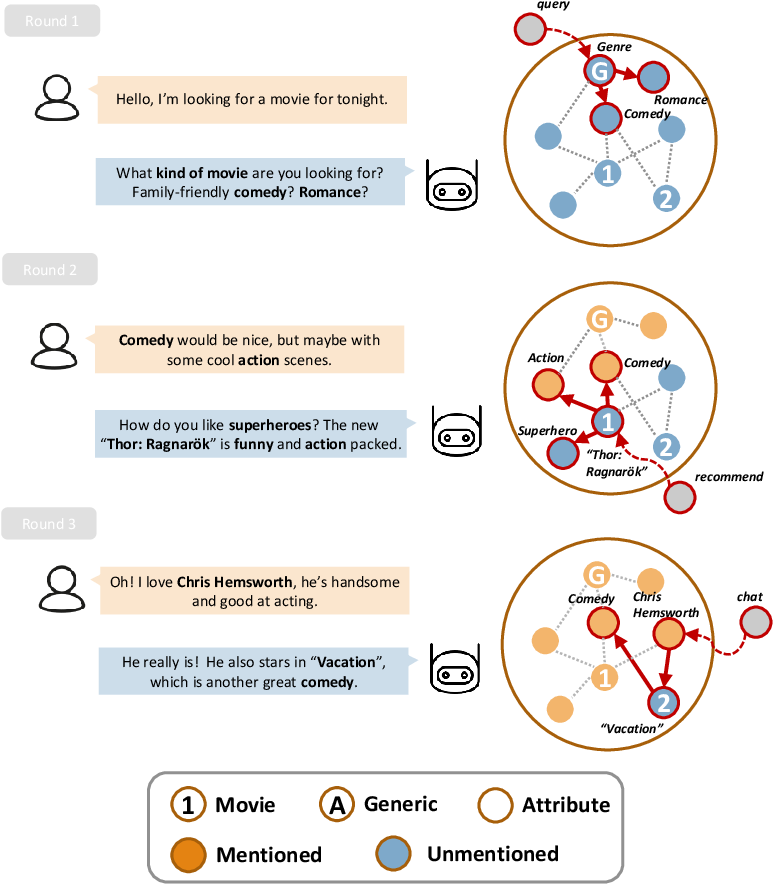 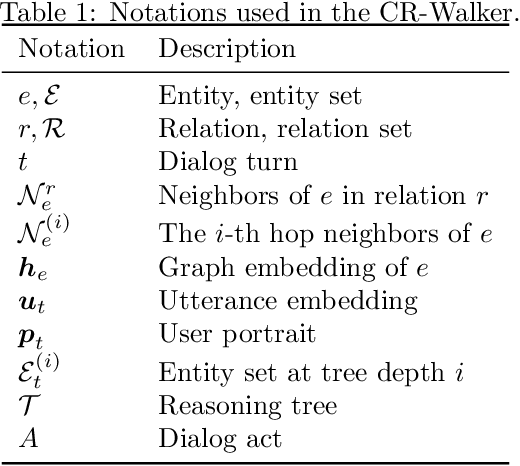 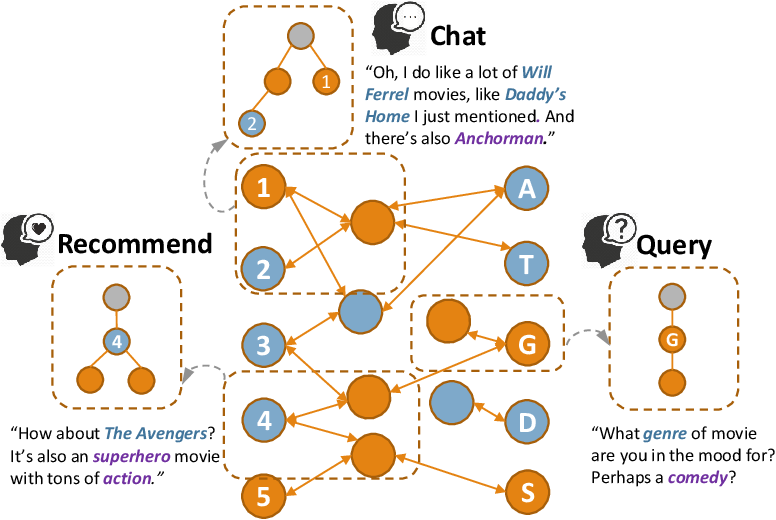 There have been growing interests in building a conversational recommender system, where the system simultaneously interacts with the user and explores the user's preference throughout conversational interactions. Recommendation and conversation were usually treated as two separate modules with limited information exchange in existing works, which hinders the capability of both systems: (1) dialog merely incorporated recommendation entities without being guided by an explicit recommendation-oriented policy; (2) recommendation utilized dialog only as a form of interaction instead of improving recommendation effectively. To address the above issues, we propose a novel recommender dialog model: CR-Walker. In order to view the two separate systems within a unified framework, we seek high-level mapping between hierarchical dialog acts and multi-hop knowledge graph reasoning. The model walks on a large-scale knowledge graph to form a reasoning tree at each turn, then mapped to dialog acts to guide response generation. With such a mapping mechanism as a bridge between recommendation and conversation, our framework maximizes the mutual benefit between two systems: dialog as an enhancement to recommendation quality and explainability, recommendation as a goal and enrichment to dialog semantics. Quantitative evaluation shows that our model excels in conversation informativeness and recommendation effectiveness, at the same time explainable on the policy level. 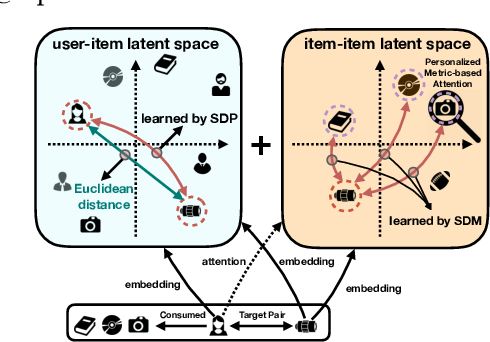 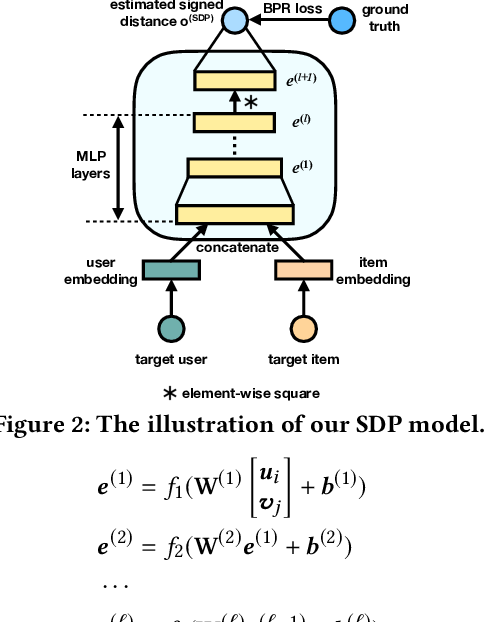 Recommender systems are used in variety of domains affecting people's lives. This has raised concerns about possible biases and discrimination that such systems might exacerbate. There are two primary kinds of biases inherent in recommender systems: observation bias and bias stemming from imbalanced data. Observation bias exists due to a feedback loop which causes the model to learn to only predict recommendations similar to previous ones. Imbalance in data occurs when systematic societal, historical, or other ambient bias is present in the data. In this paper, we address both biases by proposing a hybrid fairness-aware recommender system. Our model provides efficient and accurate recommendations by incorporating multiple user-user and item-item similarity measures, content, and demographic information, while addressing recommendation biases. We implement our model using a powerful and expressive probabilistic programming language called probabilistic soft logic. We experimentally evaluate our approach on a popular movie recommendation dataset, showing that our proposed model can provide more accurate and fairer recommendations, compared to a state-of-the art fair recommender system.