Improving the expressiveness of neural vocoding with non-affine Normalizing Flows 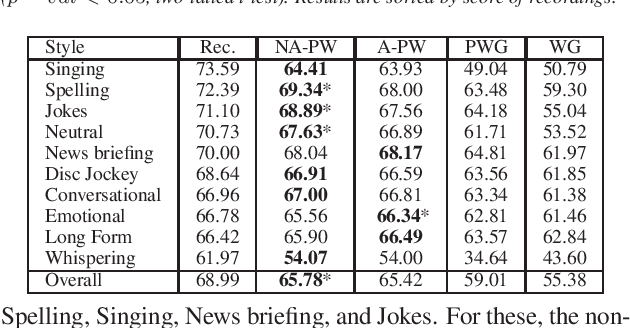 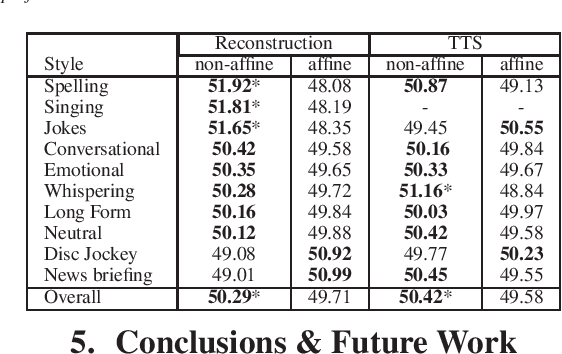 This paper proposes a general enhancement to the Normalizing Flows (NF) used in neural vocoding. As a case study, we improve expressive speech vocoding with a revamped Parallel Wavenet (PW). Specifically, we propose to extend the affine transformation of PW to the more expressive invertible non-affine function. The greater expressiveness of the improved PW leads to better-perceived signal quality and naturalness in the waveform reconstruction and text-to-speech (TTS) tasks. We evaluate the model across different speaking styles on a multi-speaker, multi-lingual dataset. In the waveform reconstruction task, the proposed model closes the naturalness and signal quality gap from the original PW to recordings by $10\%$, and from other state-of-the-art neural vocoding systems by more than $60\%$. We also demonstrate improvements in objective metrics on the evaluation test set with L2 Spectral Distance and Cross-Entropy reduced by $3\%$ and $6\unicode{x2030}$ comparing to the affine PW. Furthermore, we extend the probability density distillation procedure proposed by the original PW paper, so that it works with any non-affine invertible and differentiable function. 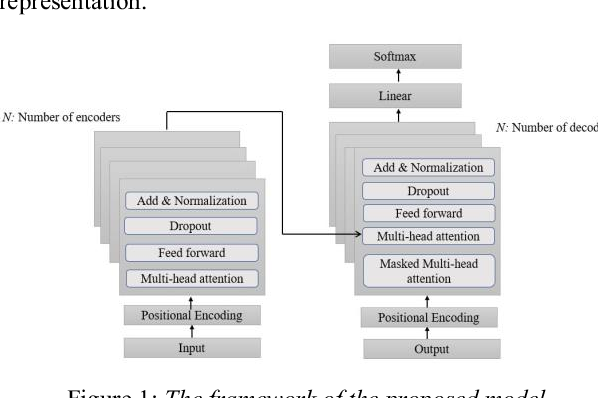 Attention mechanism is one of the most successful techniques in deep learning based Natural Language Processing (NLP). The transformer network architecture is completely based on attention mechanisms, and it outperforms sequence-to-sequence models in neural machine translation without recurrent and convolutional layers. Grapheme-to-phoneme (G2P) conversion is a task of converting letters (grapheme sequence) to their pronunciations (phoneme sequence). It plays a significant role in text-to-speech (TTS) and automatic speech recognition (ASR) systems. In this paper, we investigate the application of transformer architecture to G2P conversion and compare its performance with recurrent and convolutional neural network based approaches. Phoneme and word error rates are evaluated on the CMUDict dataset for US English and the NetTalk dataset. The results show that transformer based G2P outperforms the convolutional-based approach in terms of word error rate and our results significantly exceeded previous recurrent approaches (without attention) regarding word and phoneme error rates on both datasets. Furthermore, the size of the proposed model is much smaller than the size of the previous approaches. 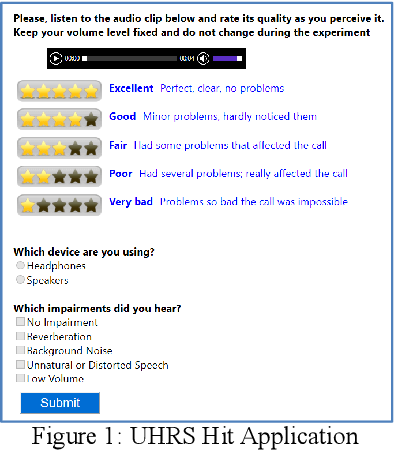 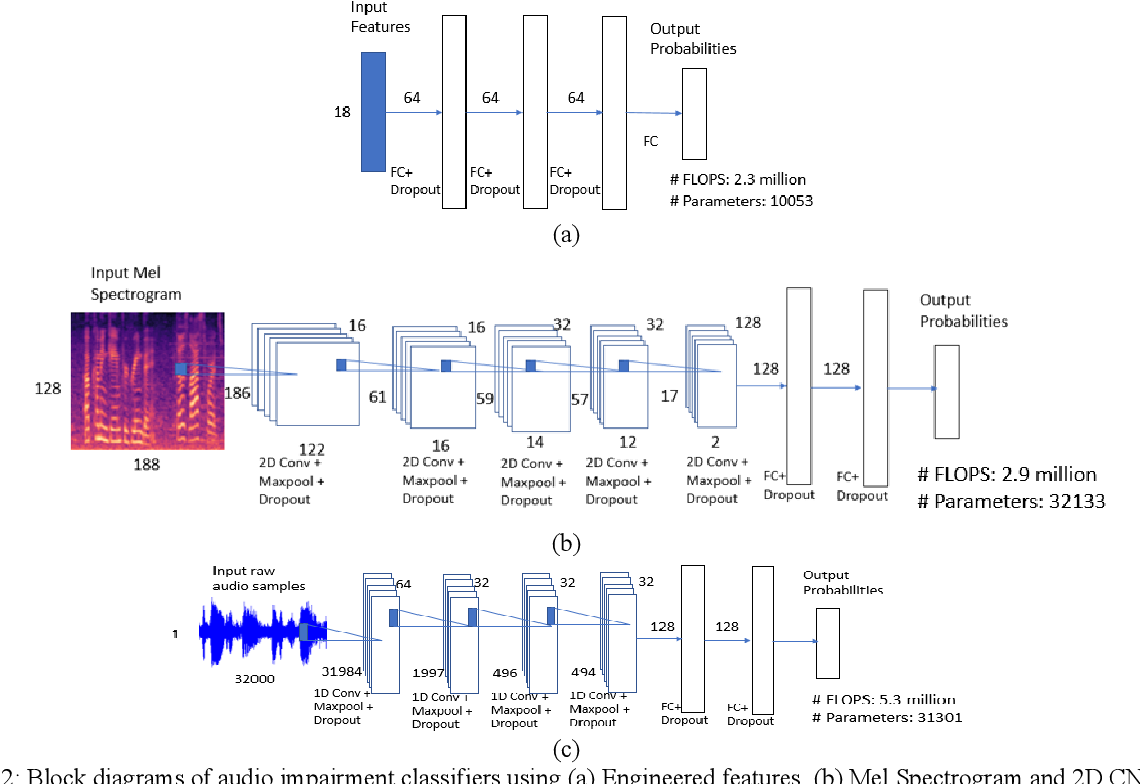 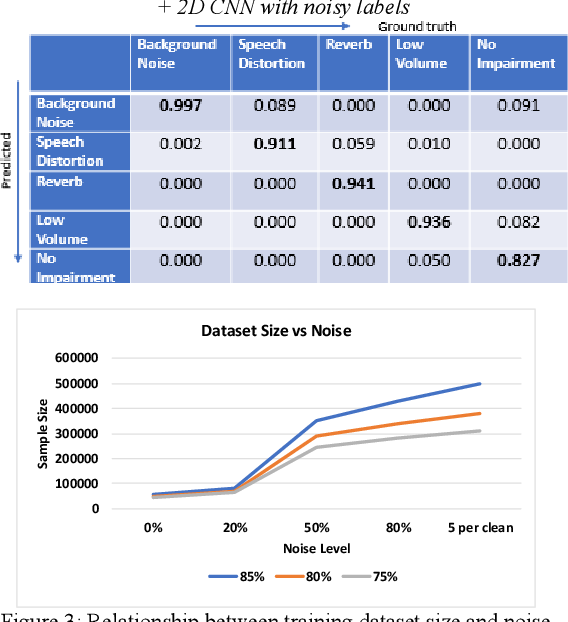 Voice-over-Internet-Protocol (VoIP) calls are prone to various speech impairments due to environmental and network conditions resulting in bad user experience. A reliable audio impairment classifier helps to identify the cause for bad audio quality. The user feedback after the call can act as the ground truth labels for training a supervised classifier on a large audio dataset. However, the labels are noisy as most of the users lack the expertise to precisely articulate the impairment in the perceived speech. In this paper, we analyze the effects of massive noise in labels in training dense networks and Convolutional Neural Networks (CNN) using engineered features, spectrograms and raw audio samples as inputs. We demonstrate that CNN can generalize better on the training data with a large number of noisy labels and gives remarkably higher test performance. The classifiers were trained both on randomly generated label noise and the label noise introduced by human errors. We also show that training with noisy labels requires a significant increase in the training dataset size, which is in proportion to the amount of noise in the labels. 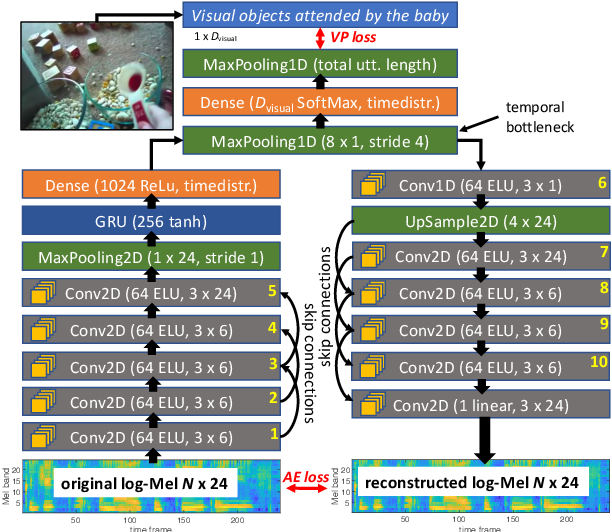 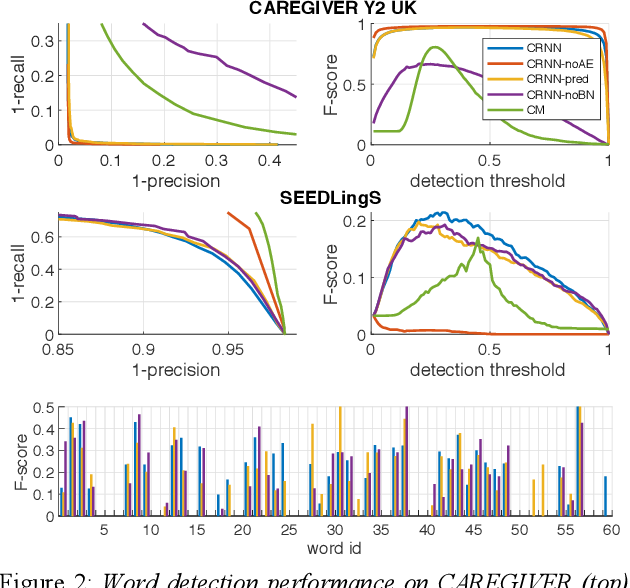 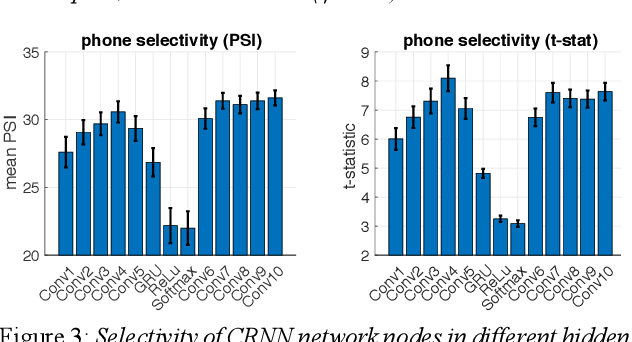 Earlier research has suggested that human infants might use statistical dependencies between speech and non-linguistic multimodal input to bootstrap their language learning before they know how to segment words from running speech. However, feasibility of this hypothesis in terms of real-world infant experiences has remained unclear. This paper presents a step towards a more realistic test of the multimodal bootstrapping hypothesis by describing a neural network model that can learn word segments and their meanings from referentially ambiguous acoustic input. The model is tested on recordings of real infant-caregiver interactions using utterance-level labels for concrete visual objects that were attended by the infant when caregiver spoke an utterance containing the name of the object, and using random visual labels for utterances during absence of attention. The results show that beginnings of lexical knowledge may indeed emerge from individually ambiguous learning scenarios. In addition, the hidden layers of the network show gradually increasing selectivity to phonetic categories as a function of layer depth, resembling models trained for phone recognition in a supervised manner. 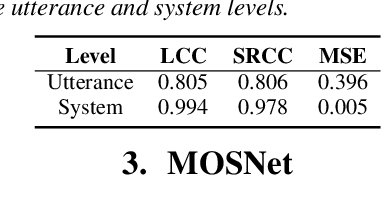 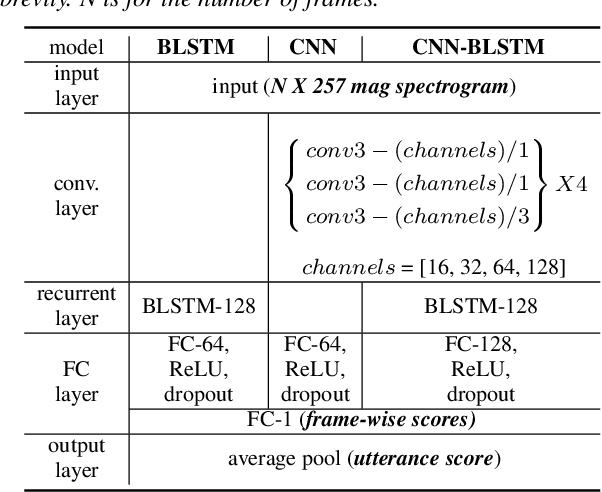 Existing objective evaluation metrics for voice conversion (VC) are not always correlated with human perception. Therefore, training VC models with such criteria may not effectively improve naturalness and similarity of converted speech. In this paper, we propose deep learning-based assessment models to predict human ratings of converted speech. We adopt the convolutional and recurrent neural network models to build a mean opinion score (MOS) predictor, termed as MOSNet. The proposed models are tested on large-scale listening test results of the Voice Conversion Challenge (VCC) 2018. Experimental results show that the predicted scores of the proposed MOSNet are highly correlated with human MOS ratings at the system level while being fairly correlated with human MOS ratings at the utterance level. Meanwhile, we have modified MOSNet to predict the similarity scores, and the preliminary results show that the predicted scores are also fairly correlated with human ratings. These results confirm that the proposed models could be used as a computational evaluator to measure the MOS of VC systems to reduce the need for expensive human rating. 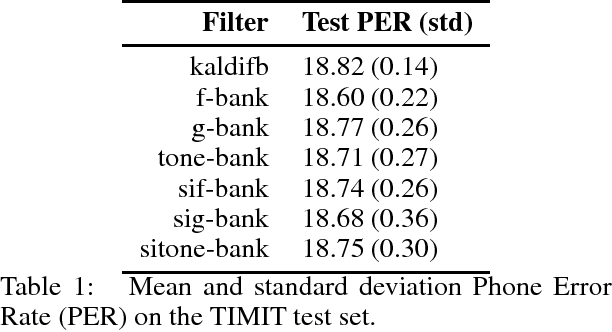 Triangular, overlapping Mel-scaled filters ("f-banks") are the current standard input for acoustic models that exploit their input's time-frequency geometry, because they provide a psycho-acoustically motivated time-frequency geometry for a speech signal. F-bank coefficients are provably robust to small deformations in the scale. In this paper, we explore two ways in which filter banks can be adjusted for the purposes of speech recognition. First, triangular filters can be replaced with Gabor filters, a compactly supported filter that better localizes events in time, or Gammatone filters, a psychoacoustically-motivated filter. Second, by rearranging the order of operations in computing filter bank features, features can be integrated over smaller time scales while simultaneously providing better frequency resolution. We make all feature implementations available online through open-source repositories. Initial experimentation with a modern end-to-end CNN phone recognizer yielded no significant improvements to phone error rate due to either modification. The result, and its ramifications with respect to learned filter banks, is discussed.

Overview of the CLEF-2018 CheckThat! Lab on Automatic Identification and Verification of Political Claims. Task 1: Check-Worthiness 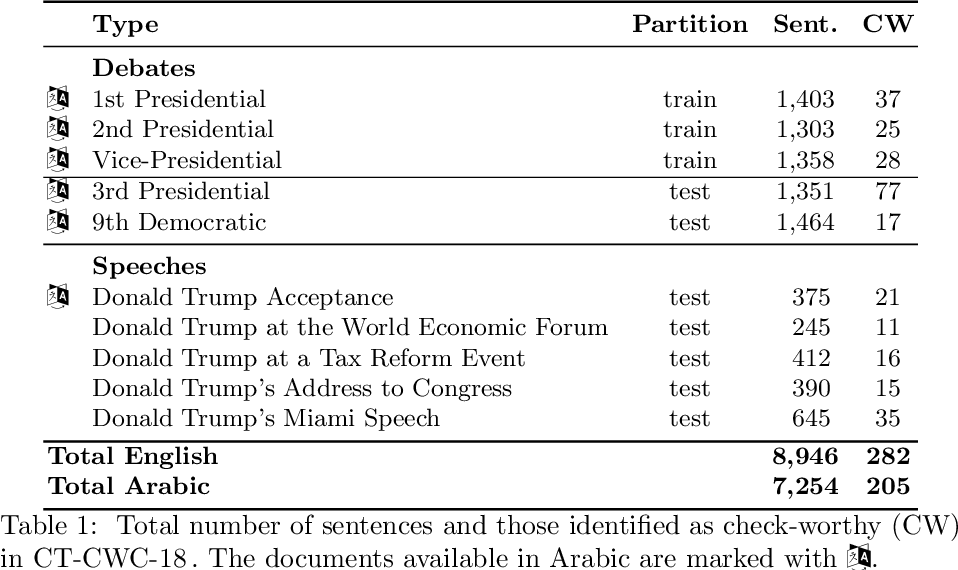 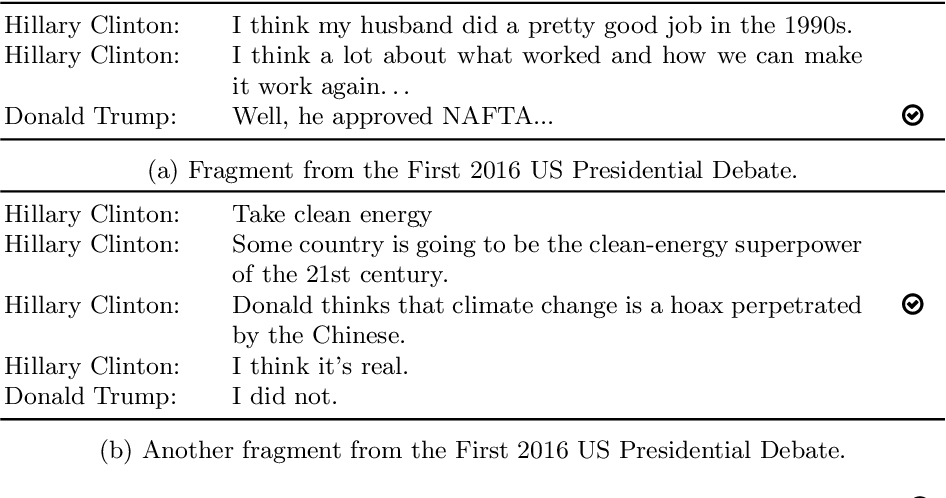 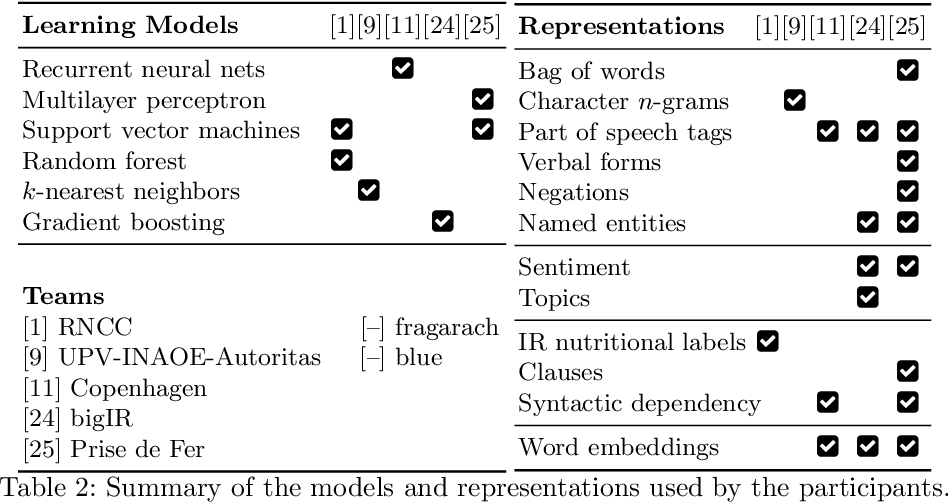 We present an overview of the CLEF-2018 CheckThat! Lab on Automatic Identification and Verification of Political Claims, with focus on Task 1: Check-Worthiness. The task asks to predict which claims in a political debate should be prioritized for fact-checking. In particular, given a debate or a political speech, the goal was to produce a ranked list of its sentences based on their worthiness for fact checking. We offered the task in both English and Arabic, based on debates from the 2016 US Presidential Campaign, as well as on some speeches during and after the campaign. A total of 30 teams registered to participate in the Lab and seven teams actually submitted systems for Task~1. The most successful approaches used by the participants relied on recurrent and multi-layer neural networks, as well as on combinations of distributional representations, on matchings claims' vocabulary against lexicons, and on measures of syntactic dependency. The best systems achieved mean average precision of 0.18 and 0.15 on the English and on the Arabic test datasets, respectively. This leaves large room for further improvement, and thus we release all datasets and the scoring scripts, which should enable further research in check-worthiness estimation. 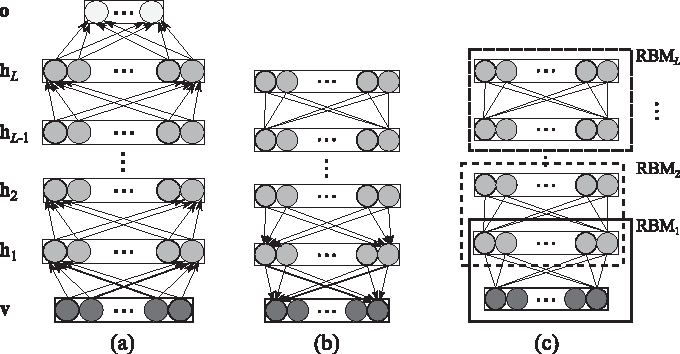 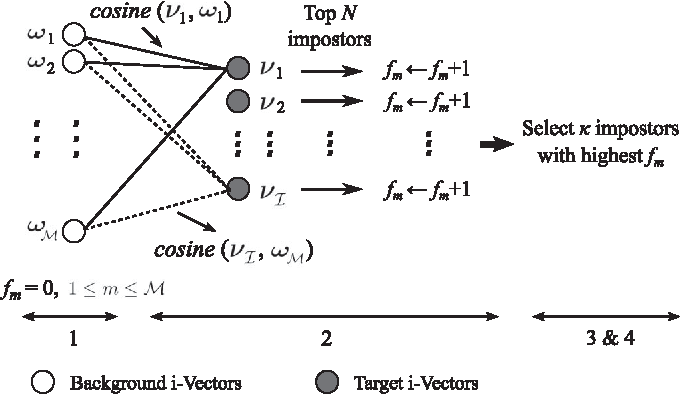 The promising performance of Deep Learning (DL) in speech recognition has motivated the use of DL in other speech technology applications such as speaker recognition. Given i-vectors as inputs, the authors proposed an impostor selection algorithm and a universal model adaptation process in a hybrid system based on Deep Belief Networks (DBN) and Deep Neural Networks (DNN) to discriminatively model each target speaker. In order to have more insight into the behavior of DL techniques in both single and multi-session speaker enrollment tasks, some experiments have been carried out in this paper in both scenarios. Additionally, the parameters of the global model, referred to as universal DBN (UDBN), are normalized before adaptation. UDBN normalization facilitates training DNNs specifically with more than one hidden layer. Experiments are performed on the NIST SRE 2006 corpus. It is shown that the proposed impostor selection algorithm and UDBN adaptation process enhance the performance of conventional DNNs 8-20 % and 16-20 % in terms of EER for the single and multi-session tasks, respectively. In both scenarios, the proposed architectures outperform the baseline systems obtaining up to 17 % reduction in EER. 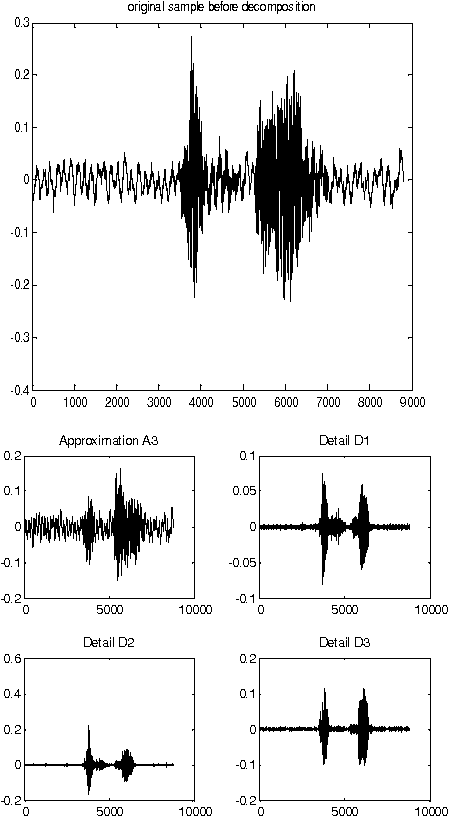 To improve the performance of speaker identification systems, an effective and robust method is proposed to extract speech features, capable of operating in noisy environment. Based on the time-frequency multi-resolution property of wavelet transform, the input speech signal is decomposed into various frequency channels. For capturing the characteristic of the signal, the Mel-Frequency Cepstral Coefficients (MFCCs) of the wavelet channels are calculated. Hidden Markov Models (HMMs) were used for the recognition stage as they give better recognition for the speaker's features than Dynamic Time Warping (DTW). Comparison of the proposed approach with the MFCCs conventional feature extraction method shows that the proposed method not only effectively reduces the influence of noise, but also improves recognition. A recognition rate of 99.3% was obtained using the proposed feature extraction technique compared to 98.7% using the MFCCs. When the test patterns were corrupted by additive white Gaussian noise with 20 dB S/N ratio, the recognition rate was 97.3% using the proposed method compared to 93.3% using the MFCCs.