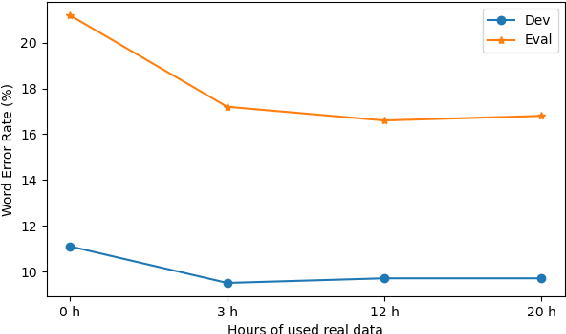 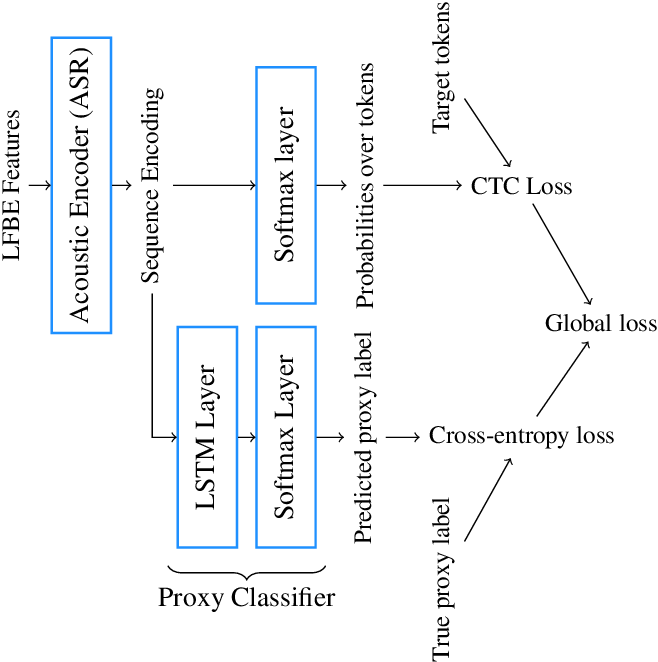 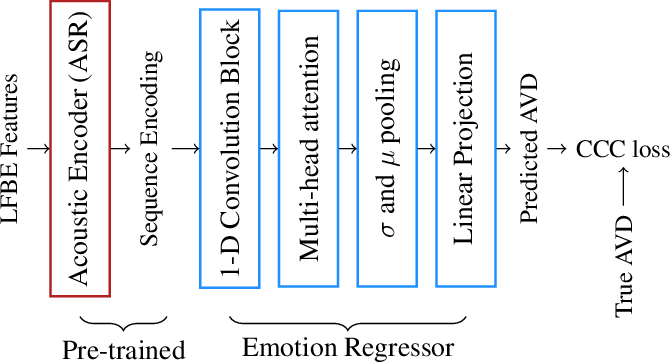 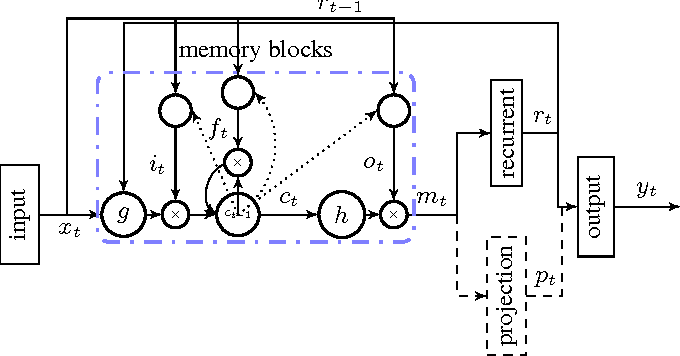 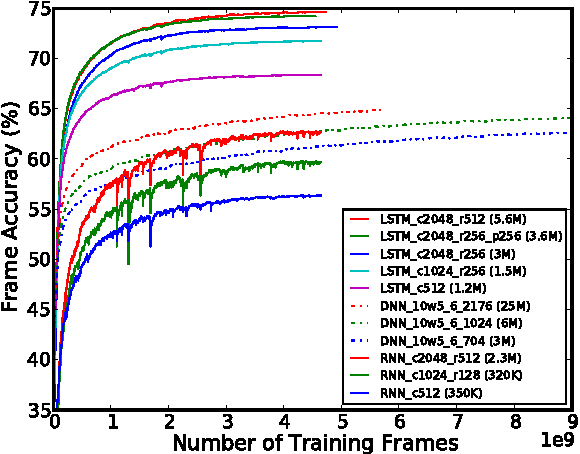 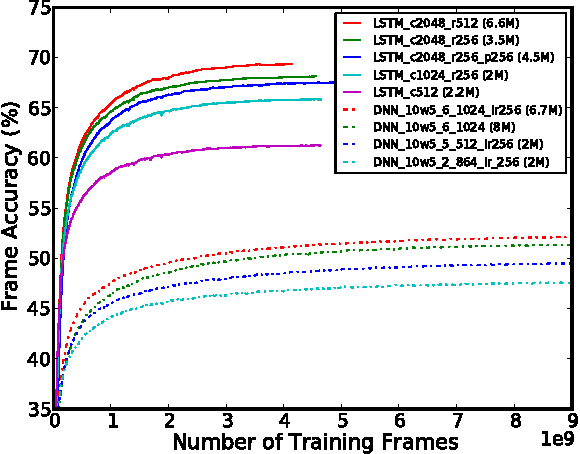 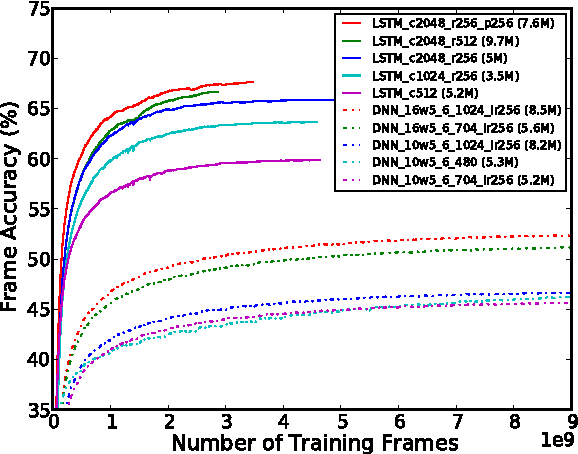 Long Short-Term Memory (LSTM) is a recurrent neural network (RNN) architecture that has been designed to address the vanishing and exploding gradient problems of conventional RNNs. Unlike feedforward neural networks, RNNs have cyclic connections making them powerful for modeling sequences. They have been successfully used for sequence labeling and sequence prediction tasks, such as handwriting recognition, language modeling, phonetic labeling of acoustic frames. However, in contrast to the deep neural networks, the use of RNNs in speech recognition has been limited to phone recognition in small scale tasks. In this paper, we present novel LSTM based RNN architectures which make more effective use of model parameters to train acoustic models for large vocabulary speech recognition. We train and compare LSTM, RNN and DNN models at various numbers of parameters and configurations. We show that LSTM models converge quickly and give state of the art speech recognition performance for relatively small sized models. 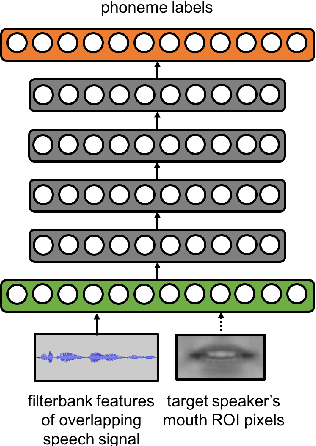 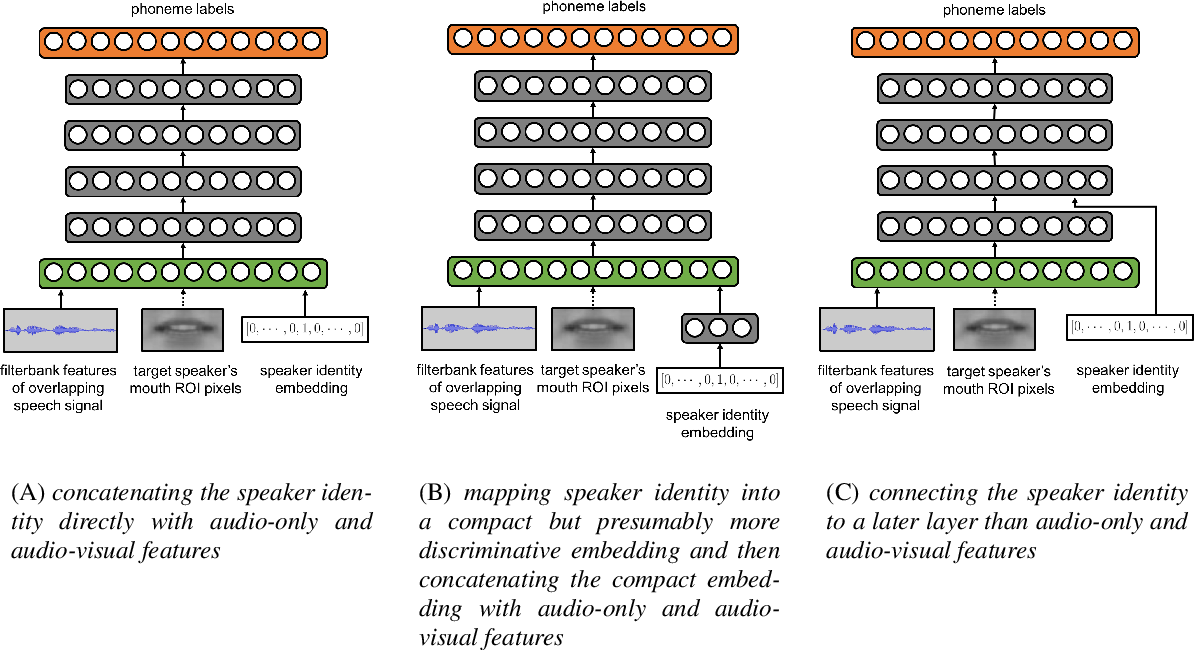 Speech recognition in cocktail-party environments remains a significant challenge for state-of-the-art speech recognition systems, as it is extremely difficult to extract an acoustic signal of an individual speaker from a background of overlapping speech with similar frequency and temporal characteristics. We propose the use of speaker-targeted acoustic and audio-visual models for this task. We complement the acoustic features in a hybrid DNN-HMM model with information of the target speaker's identity as well as visual features from the mouth region of the target speaker. Experimentation was performed using simulated cocktail-party data generated from the GRID audio-visual corpus by overlapping two speakers's speech on a single acoustic channel. Our audio-only baseline achieved a WER of 26.3%. The audio-visual model improved the WER to 4.4%. Introducing speaker identity information had an even more pronounced effect, improving the WER to 3.6%. Combining both approaches, however, did not significantly improve performance further. Our work demonstrates that speaker-targeted models can significantly improve the speech recognition in cocktail party environments. 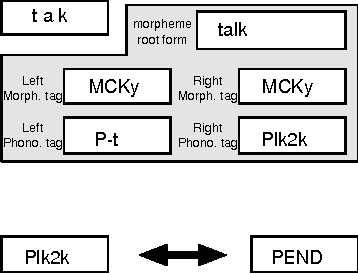 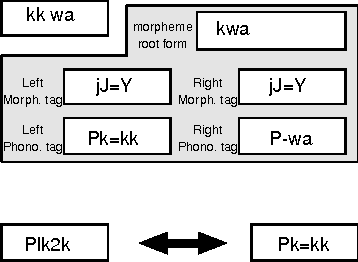 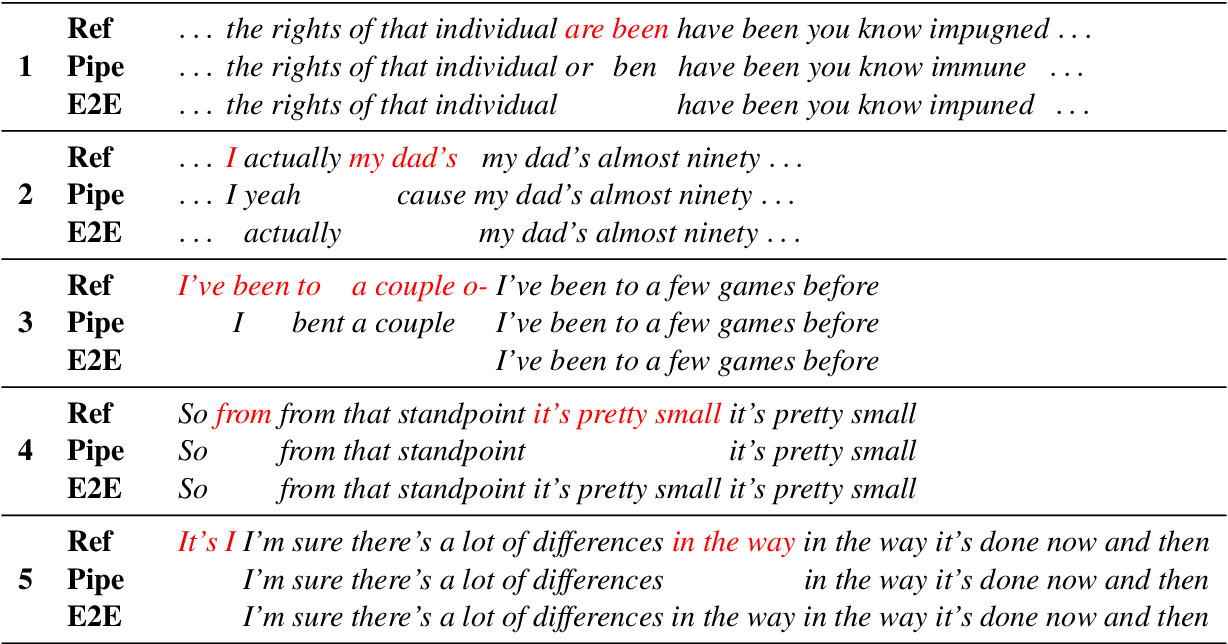 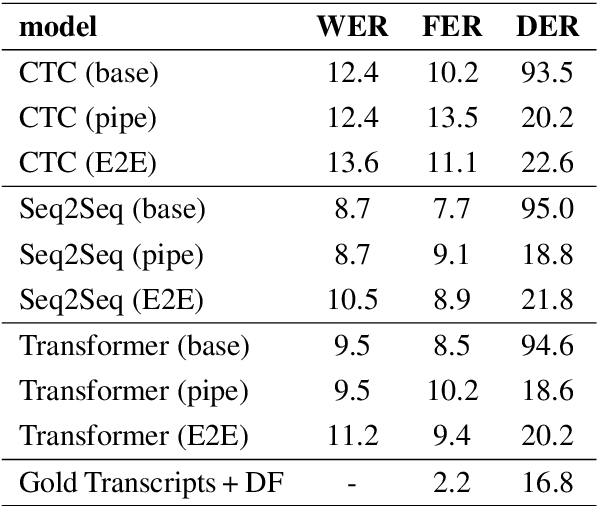 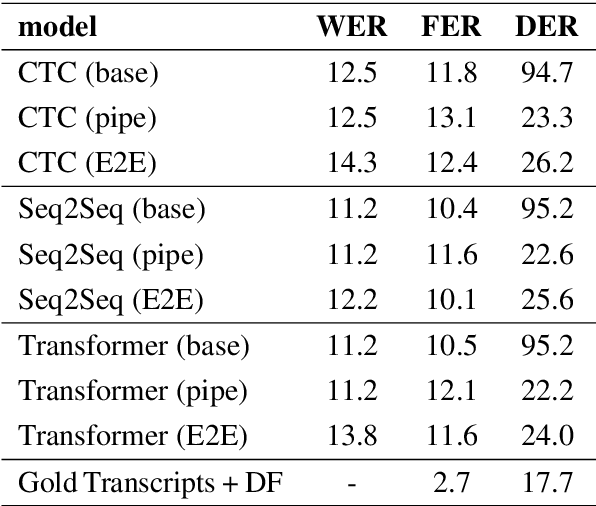 Disfluency detection is usually an intermediate step between an automatic speech recognition (ASR) system and a downstream task. By contrast, this paper aims to investigate the task of end-to-end speech recognition and disfluency removal. We specifically explore whether it is possible to train an ASR model to directly map disfluent speech into fluent transcripts, without relying on a separate disfluency detection model. We show that end-to-end models do learn to directly generate fluent transcripts; however, their performance is slightly worse than a baseline pipeline approach consisting of an ASR system and a disfluency detection model. We also propose two new metrics that can be used for evaluating integrated ASR and disfluency models. The findings of this paper can serve as a benchmark for further research on the task of end-to-end speech recognition and disfluency removal in the future. 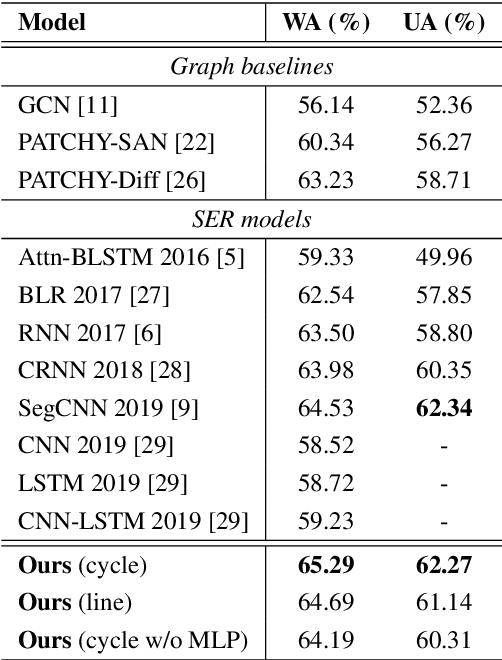 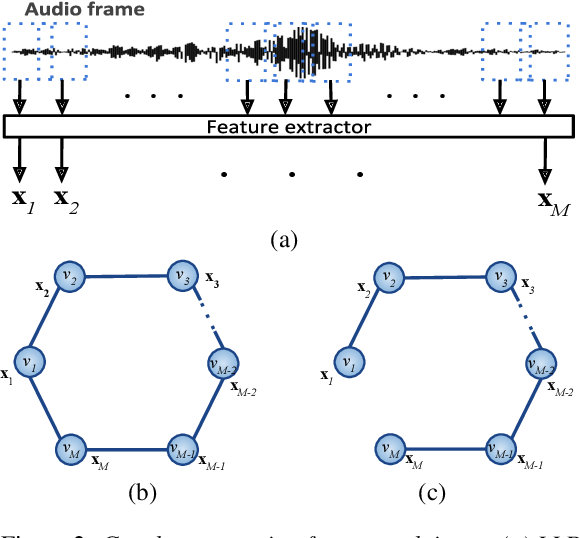 We propose a deep graph approach to address the task of speech emotion recognition. A compact, efficient and scalable way to represent data is in the form of graphs. Following the theory of graph signal processing, we propose to model speech signal as a cycle graph or a line graph. Such graph structure enables us to construct a graph convolution network (GCN)-based architecture that can perform an \emph{accurate} graph convolution in contrast to the approximate convolution used in standard GCNs. We evaluated the performance of our model for speech emotion recognition on the popular IEMOCAP database. Our model outperforms standard GCN and other relevant deep graph architectures indicating the effectiveness of our approach. When compared with existing speech emotion recognition methods, our model achieves state-of-the-art performance (4-class, $65.29\%$) with significantly fewer learnable parameters. 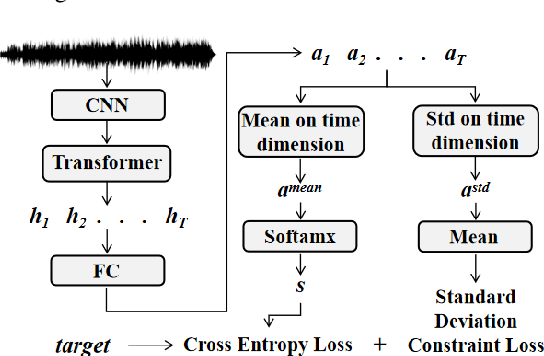 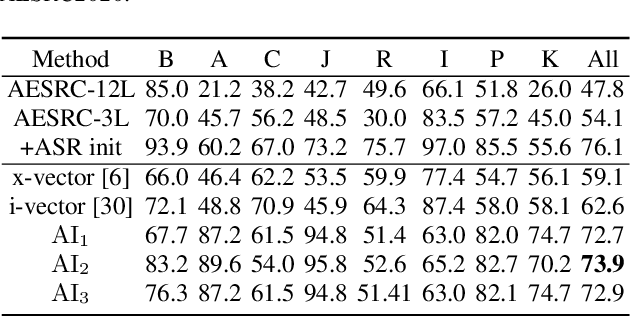 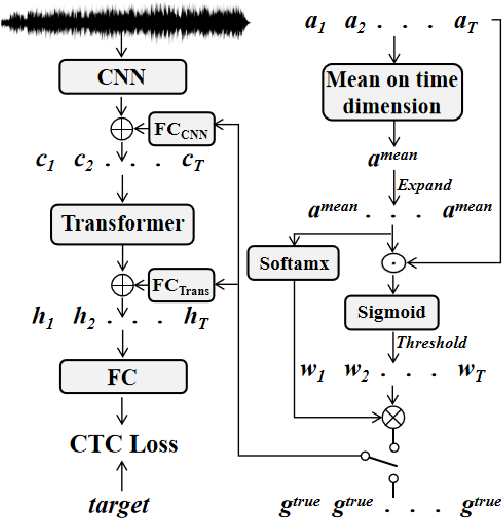 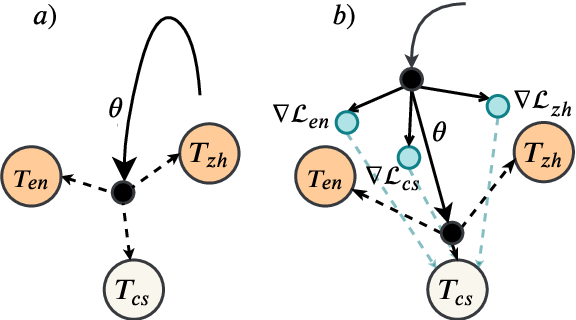 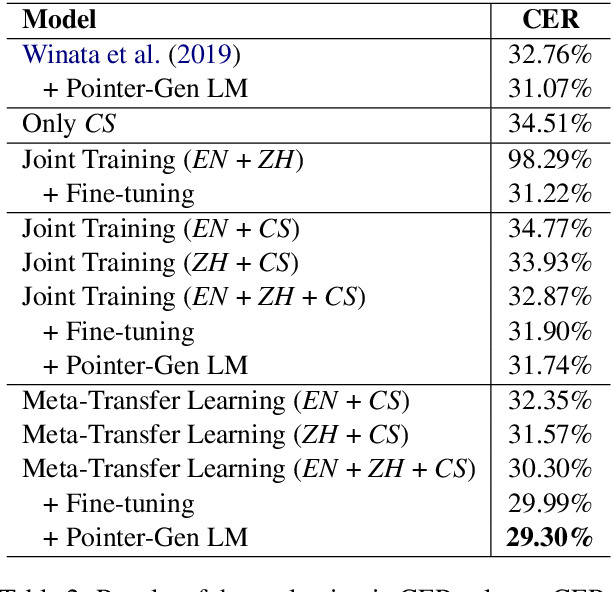 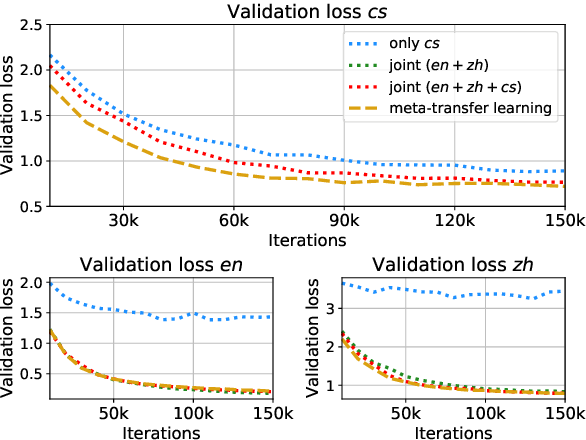 An increasing number of people in the world today speak a mixed-language as a result of being multilingual. However, building a speech recognition system for code-switching remains difficult due to the availability of limited resources and the expense and significant effort required to collect mixed-language data. We therefore propose a new learning method, meta-transfer learning, to transfer learn on a code-switched speech recognition system in a low-resource setting by judiciously extracting information from high-resource monolingual datasets. Our model learns to recognize individual languages, and transfer them so as to better recognize mixed-language speech by conditioning the optimization on the code-switching data. Based on experimental results, our model outperforms existing baselines on speech recognition and language modeling tasks, and is faster to converge.


* Accepted in ACL 2020. The first two authors contributed equally to this work