Photo-realistic re-rendering of a human from a single image with explicit control over body pose, shape and appearance enables a wide range of applications, such as human appearance transfer, virtual try-on, motion imitation, and novel view synthesis. While significant progress has been made in this direction using learning-based image generation tools, such as GANs, existing approaches yield noticeable artefacts such as blurring of fine details, unrealistic distortions of the body parts and garments as well as severe changes of the textures. We, therefore, propose a new method for synthesising photo-realistic human images with explicit control over pose and part-based appearance, i.e., StylePoseGAN, where we extend a non-controllable generator to accept conditioning of pose and appearance separately. Our network can be trained in a fully supervised way with human images to disentangle pose, appearance and body parts, and it significantly outperforms existing single image re-rendering methods. Our disentangled representation opens up further applications such as garment transfer, motion transfer, virtual try-on, head (identity) swap and appearance interpolation. StylePoseGAN achieves state-of-the-art image generation fidelity on common perceptual metrics compared to the current best-performing methods and convinces in a comprehensive user study.

Adaptive and flexible image editing is a desirable function of modern generative models. In this work, we present a generative model with auto-encoder architecture for per-region style manipulation. We apply a code consistency loss to enforce an explicit disentanglement between content and style latent representations, making the content and style of generated samples consistent with their corresponding content and style references. The model is also constrained by a content alignment loss to ensure the foreground editing will not interfere background contents. As a result, given interested region masks provided by users, our model supports foreground region-wise style transfer. Specially, our model receives no extra annotations such as semantic labels except for self-supervision. Extensive experiments show the effectiveness of the proposed method and exhibit the flexibility of the proposed model for various applications, including region-wise style editing, latent space interpolation, cross-domain style transfer. 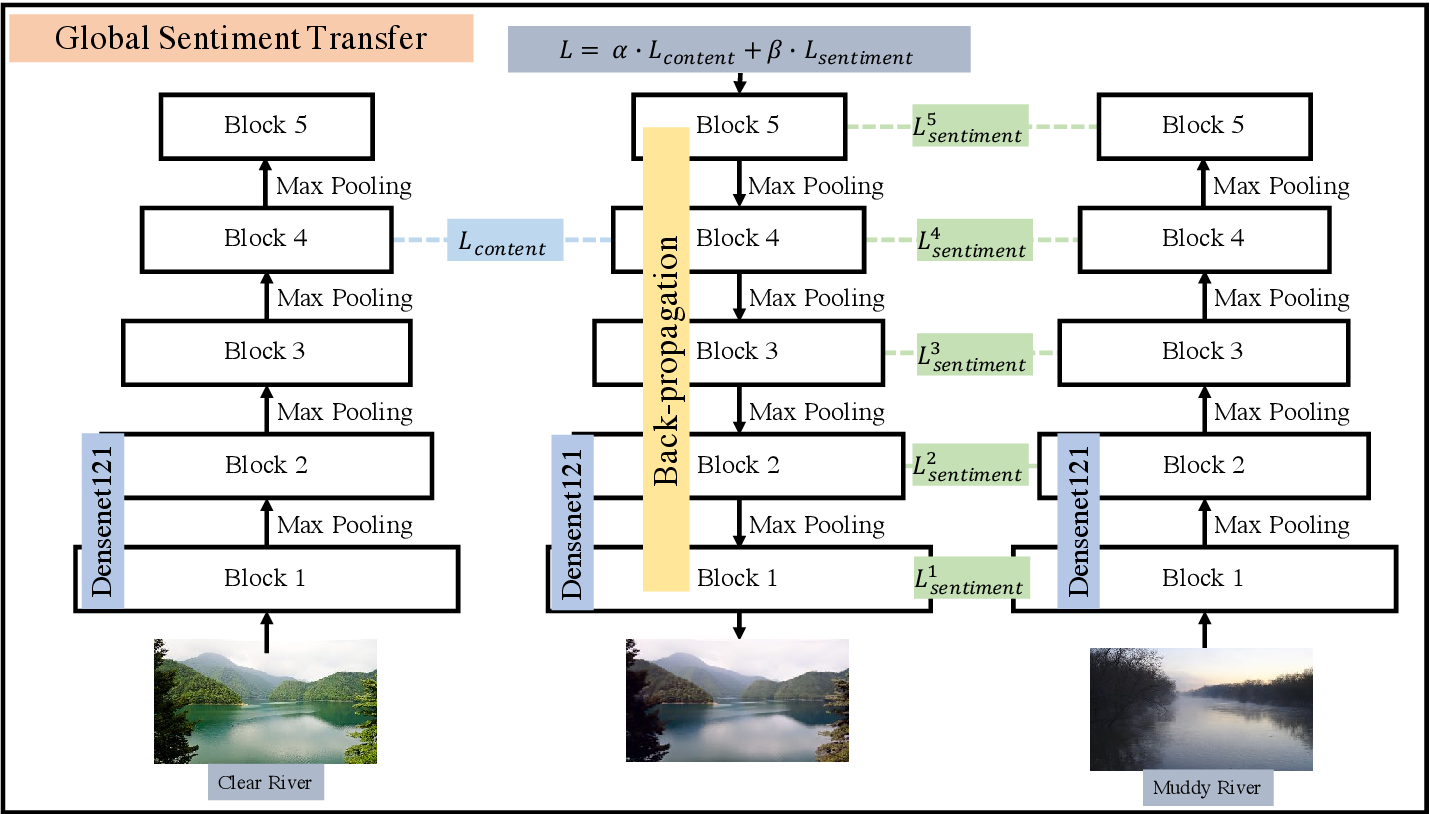 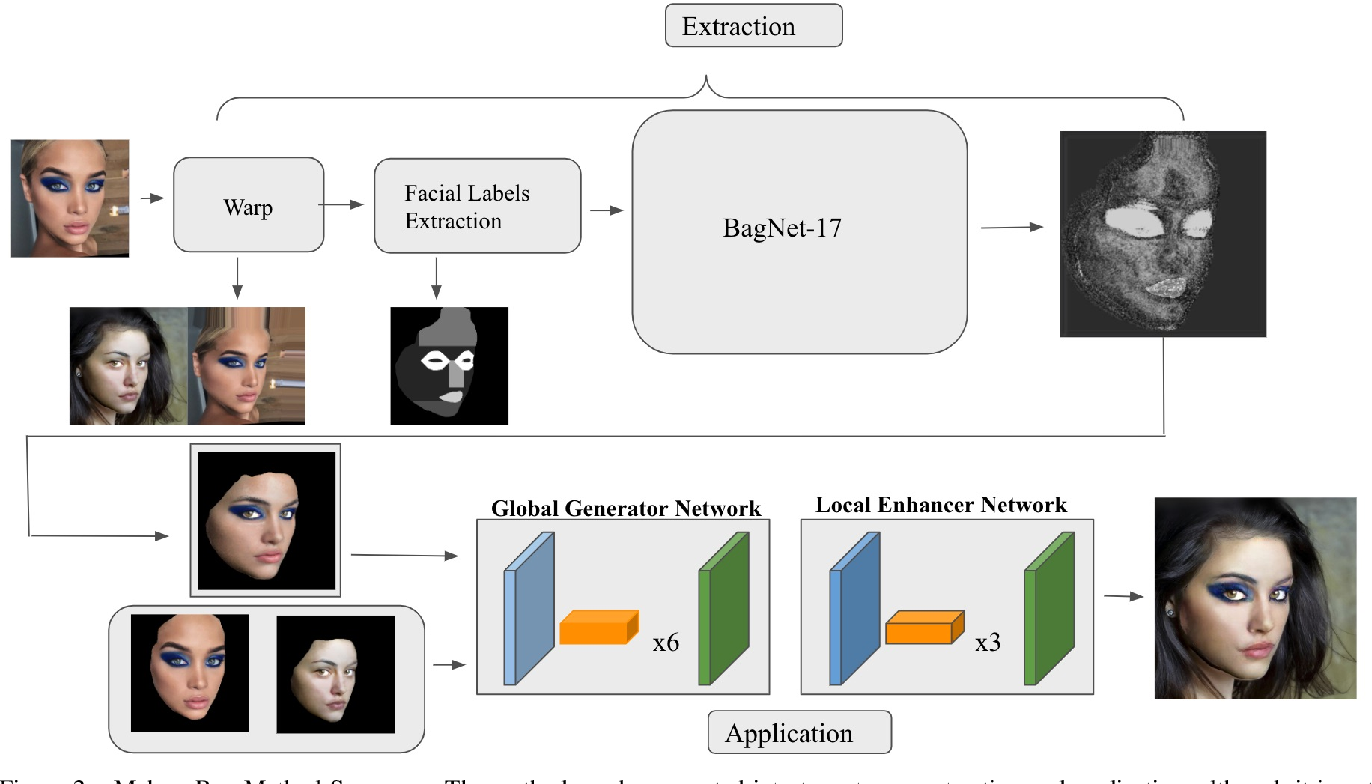 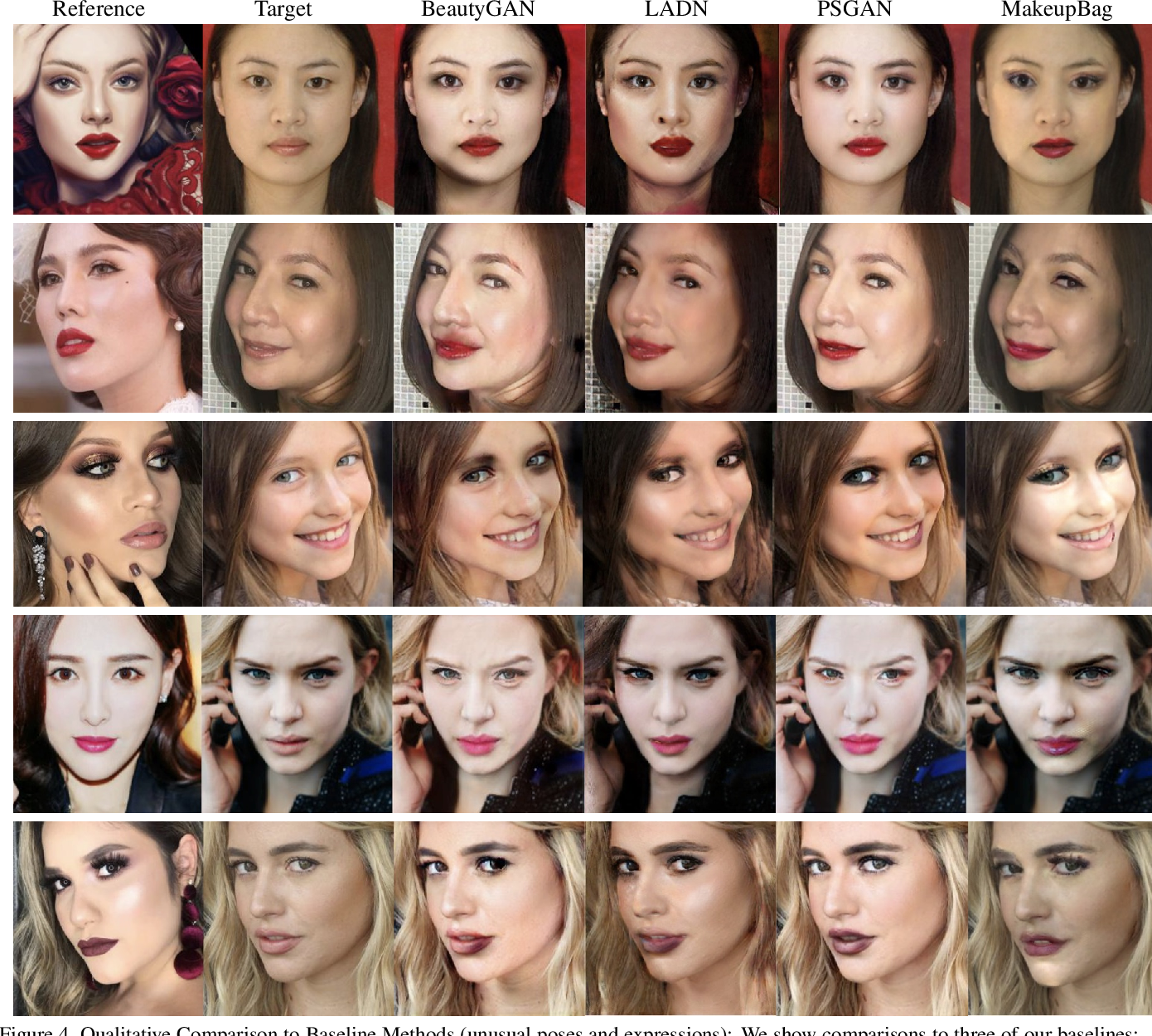 This paper introduces MakeupBag, a novel method for automatic makeup style transfer. Our proposed technique can transfer a new makeup style from a reference face image to another previously unseen facial photograph. We solve makeup disentanglement and facial makeup application as separable objectives, in contrast to other current deep methods that entangle the two tasks. MakeupBag presents a significant advantage for our approach as it allows customization and pixel specific modification of the extracted makeup style, which is not possible using current methods. Extensive experiments, both qualitative and numerical, are conducted demonstrating the high quality and accuracy of the images produced by our method. Furthermore, in contrast to most other current methods, MakeupBag tackles both classical and extreme and costume makeup transfer. In a comparative analysis, MakeupBag is shown to outperform current state-of-the-art approaches. 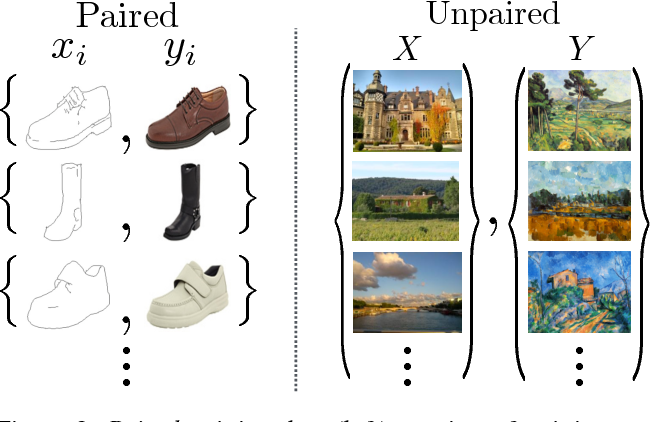 Image-to-image translation is a class of vision and graphics problems where the goal is to learn the mapping between an input image and an output image using a training set of aligned image pairs. However, for many tasks, paired training data will not be available. We present an approach for learning to translate an image from a source domain $X$ to a target domain $Y$ in the absence of paired examples. Our goal is to learn a mapping $G: X \rightarrow Y$ such that the distribution of images from $G(X)$ is indistinguishable from the distribution $Y$ using an adversarial loss. Because this mapping is highly under-constrained, we couple it with an inverse mapping $F: Y \rightarrow X$ and introduce a cycle consistency loss to push $F(G(X)) \approx X$ (and vice versa). Qualitative results are presented on several tasks where paired training data does not exist, including collection style transfer, object transfiguration, season transfer, photo enhancement, etc. Quantitative comparisons against several prior methods demonstrate the superiority of our approach.


* An extended version of our ICCV 2017 paper, v5 (1) adds the link to CycleGAN PyTorch code and (2) fixes typos and formatting issues. 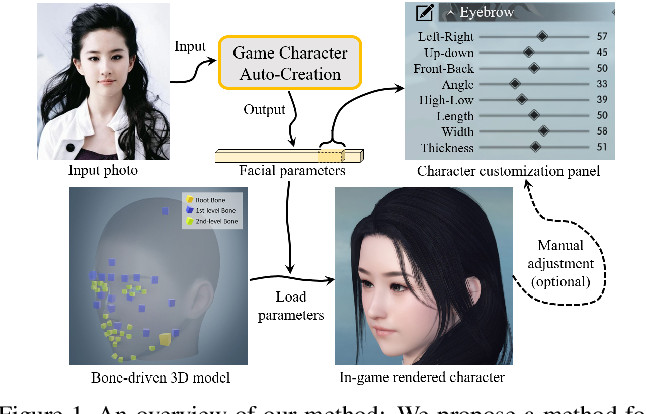 Character customization system is an important component in Role-Playing Games (RPGs), where players are allowed to edit the facial appearance of their in-game characters with their own preferences rather than using default templates. This paper proposes a method for automatically creating in-game characters of players according to an input face photo. We formulate the above "artistic creation" process under a facial similarity measurement and parameter searching paradigm by solving an optimization problem over a large set of physically meaningful facial parameters. To effectively minimize the distance between the created face and the real one, two loss functions, i.e. a "discriminative loss" and a "facial content loss", are specifically designed. As the rendering process of a game engine is not differentiable, a generative network is further introduced as an "imitator" to imitate the physical behavior of the game engine so that the proposed method can be implemented under a neural style transfer framework and the parameters can be optimized by gradient descent. Experimental results demonstrate that our method achieves a high degree of generation similarity between the input face photo and the created in-game character in terms of both global appearance and local details. Our method has been deployed in a new game last year and has now been used by players over 1 million times.

With the rapid development of Role-Playing Games (RPGs), players are now allowed to edit the facial appearance of their in-game characters with their preferences rather than using default templates. This paper proposes a game character auto-creation framework that generates in-game characters according to a player's input face photo. Different from the previous methods that are designed based on neural style transfer or monocular 3D face reconstruction, we re-formulate the character auto-creation process in a different point of view: by predicting a large set of physically meaningful facial parameters under a self-supervised learning paradigm. Instead of updating facial parameters iteratively at the input end of the renderer as suggested by previous methods, which are time-consuming, we introduce a facial parameter translator so that the creation can be done efficiently through a single forward propagation from the face embeddings to parameters, with a considerable 1000x computational speedup. Despite its high efficiency, the interactivity is preserved in our method where users are allowed to optionally fine-tune the facial parameters on our creation according to their needs. Our approach also shows better robustness than previous methods, especially for those photos with head-pose variance. Comparison results and ablation analysis on seven public face verification datasets suggest the effectiveness of our method.


* Accepted by AAAI 2020 with supplementary material

Diamond in the rough: Improving image realism by traversing the GAN latent space 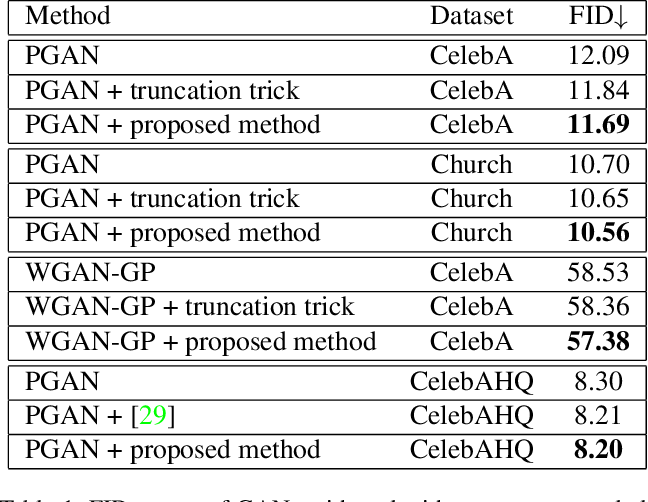 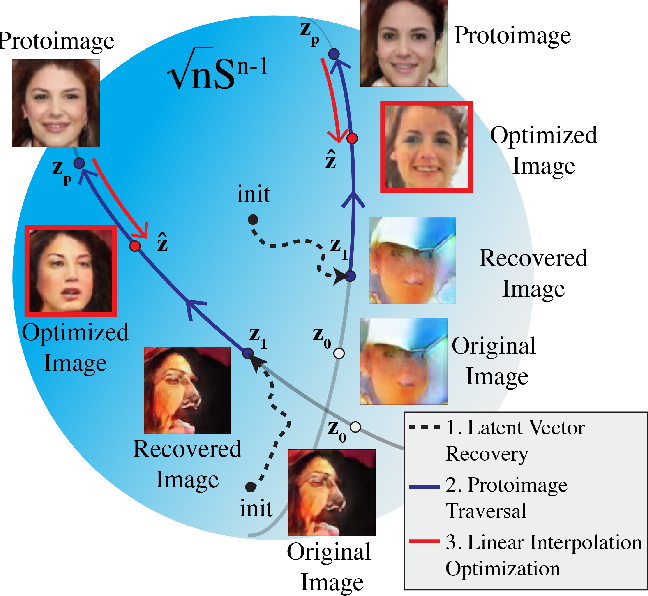 In just a few years, the photo-realism of images synthesized by Generative Adversarial Networks (GANs) has gone from somewhat reasonable to almost perfect largely by increasing the complexity of the networks, e.g., adding layers, intermediate latent spaces, style-transfer parameters, etc. This trajectory has led many of the state-of-the-art GANs to be inaccessibly large, disengaging many without large computational resources. Recognizing this, we explore a method for squeezing additional performance from existing, low-complexity GANs. Formally, we present an unsupervised method to find a direction in the latent space that aligns with improved photo-realism. Our approach leaves the network unchanged while enhancing the fidelity of the generated image. We use a simple generator inversion to find the direction in the latent space that results in the smallest change in the image space. Leveraging the learned structure of the latent space, we find moving in this direction corrects many image artifacts and brings the image into greater realism. We verify our findings qualitatively and quantitatively, showing an improvement in Frechet Inception Distance (FID) exists along our trajectory which surpasses the original GAN and other approaches including a supervised method. We expand further and provide an optimization method to automatically select latent vectors along the path that balance the variation and realism of samples. We apply our method to several diverse datasets and three architectures of varying complexity to illustrate the generalizability of our approach. By expanding the utility of low-complexity and existing networks, we hope to encourage the democratization of GANs. 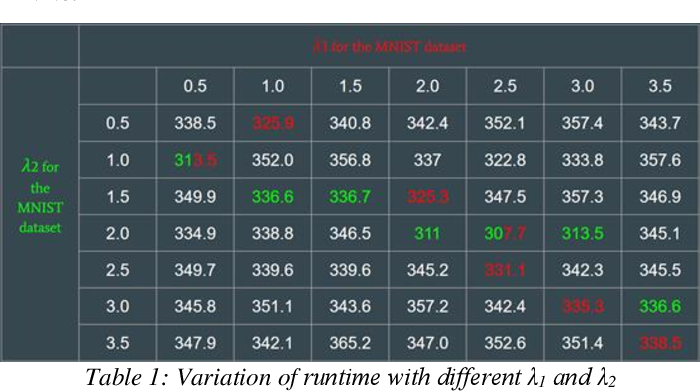 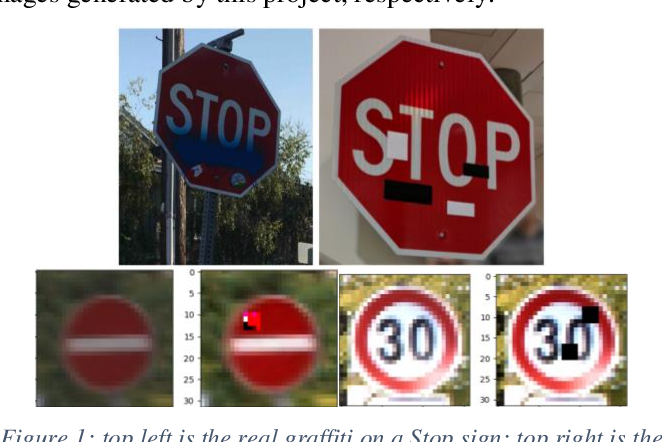 In this work, we conducted a study on building an automated testing system for deep learning systems based on differential behavior criteria. The automated testing goals were achieved by jointly optimizing two objective functions: maximizing differential behaviors from models under testing and maximizing neuron coverage. By observing differential behaviors from three pre-trained models during each testing iteration, the input image that triggered erroneous feedback was registered as a corner-case. The generated corner-cases can be used to examine the robustness of DNNs and consequently improve model accuracy. A project called DeepXplore was also used as a baseline model. After we fully implemented and optimized the baseline system, we explored its application as an augmenting training dataset with newly generated corner cases. With the GTRSB dataset, by retraining the model based on automated generated corner cases, the accuracy of three generic models increased by 259.2%, 53.6%, and 58.3%, respectively. Further, to extend the capability of automated testing, we explored other approaches based on differential behavior criteria to generate photo-realistic images for deep learning systems. One approach was to apply various transformations to the seed images for the deep learning framework. The other approach was to utilize the Generative Adversarial Networks (GAN) technique, which was implemented on MNIST and Driving datasets. The style transferring capability has been observed very effective in adding additional visual effects, replacing image elements, and style-shifting (virtual image to real images). The GAN-based testing sample generation system was shown to be the next frontier for automated testing for deep learning systems.