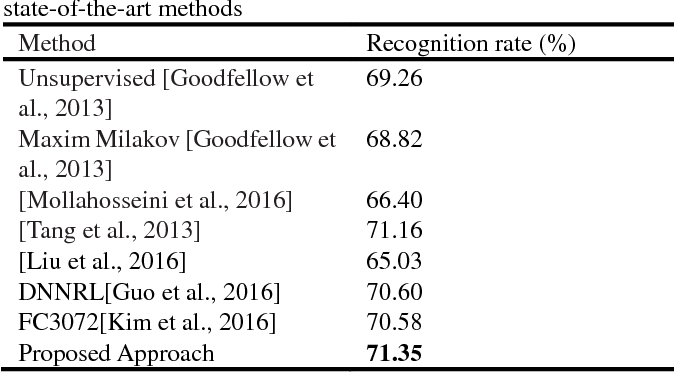 Facial expression recognition (FER) has always been a challenging issue in computer vision. The different expressions of emotion and uncontrolled environmental factors lead to inconsistencies in the complexity of FER and variability of between expression categories, which is often overlooked in most facial expression recognition systems. In order to solve this problem effectively, we presented a simple and efficient CNN model to extract facial features, and proposed a complexity perception classification (CPC) algorithm for FER. The CPC algorithm divided the dataset into an easy classification sample subspace and a complex classification sample subspace by evaluating the complexity of facial features that are suitable for classification. The experimental results of our proposed algorithm on Fer2013 and CK-plus datasets demonstrated the algorithm's effectiveness and superiority over other state-of-the-art approaches. 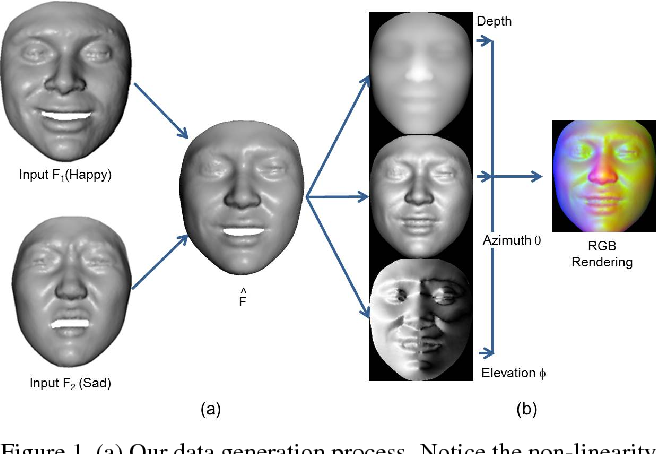 Deep networks trained on millions of facial images are believed to be closely approaching human-level performance in face recognition. However, open world face recognition still remains a challenge. Although, 3D face recognition has an inherent edge over its 2D counterpart, it has not benefited from the recent developments in deep learning due to the unavailability of large training as well as large test datasets. Recognition accuracies have already saturated on existing 3D face datasets due to their small gallery sizes. Unlike 2D photographs, 3D facial scans cannot be sourced from the web causing a bottleneck in the development of deep 3D face recognition networks and datasets. In this backdrop, we propose a method for generating a large corpus of labeled 3D face identities and their multiple instances for training and a protocol for merging the most challenging existing 3D datasets for testing. We also propose the first deep CNN model designed specifically for 3D face recognition and trained on 3.1 Million 3D facial scans of 100K identities. Our test dataset comprises 1,853 identities with a single 3D scan in the gallery and another 31K scans as probes, which is several orders of magnitude larger than existing ones. Without fine tuning on this dataset, our network already outperforms state of the art face recognition by over 10%. We fine tune our network on the gallery set to perform end-to-end large scale 3D face recognition which further improves accuracy. Finally, we show the efficacy of our method for the open world face recognition problem. 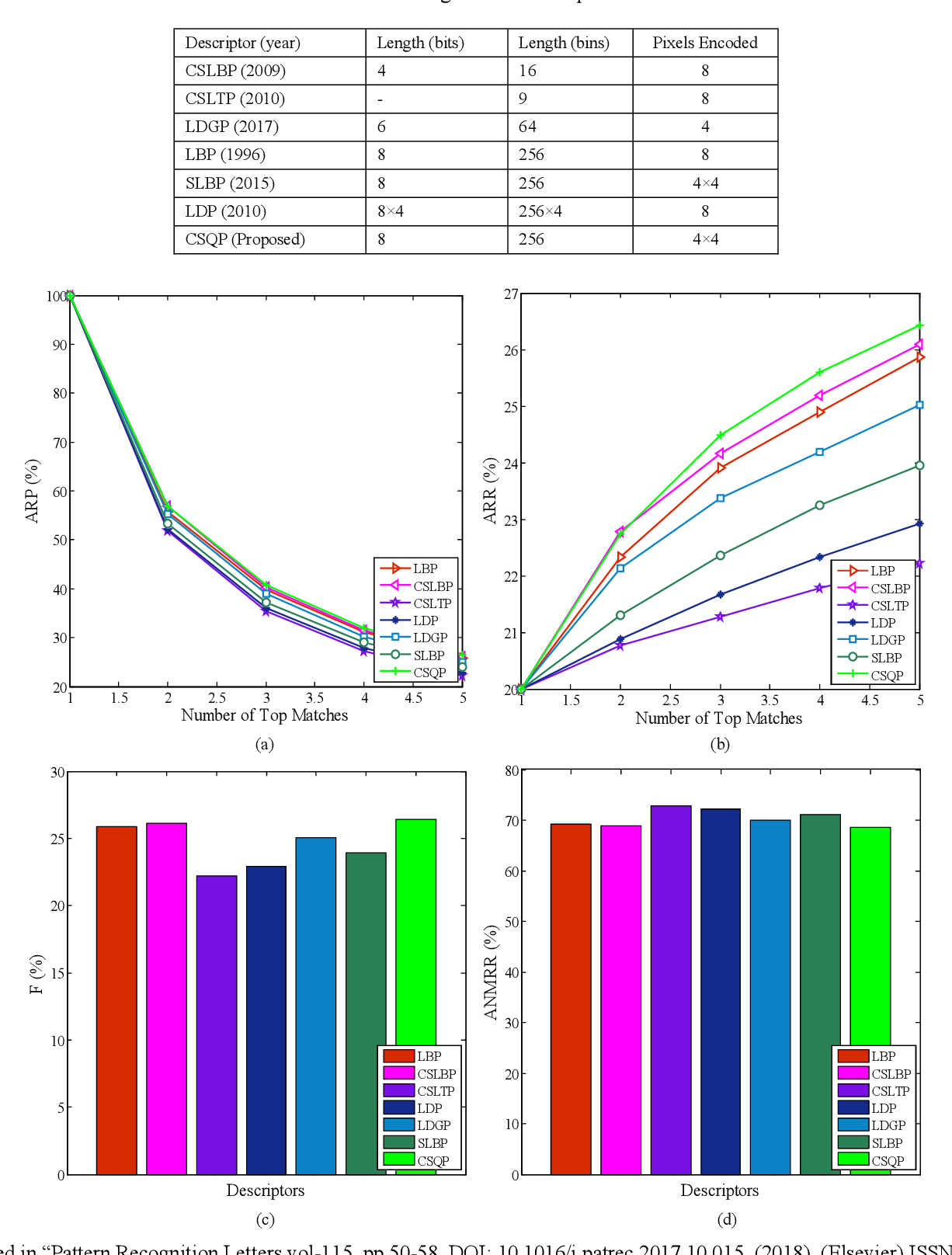 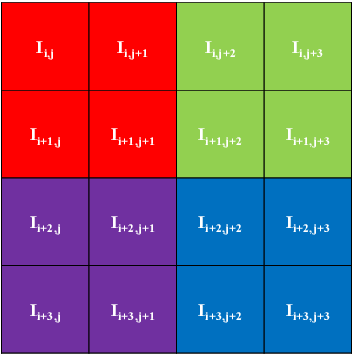 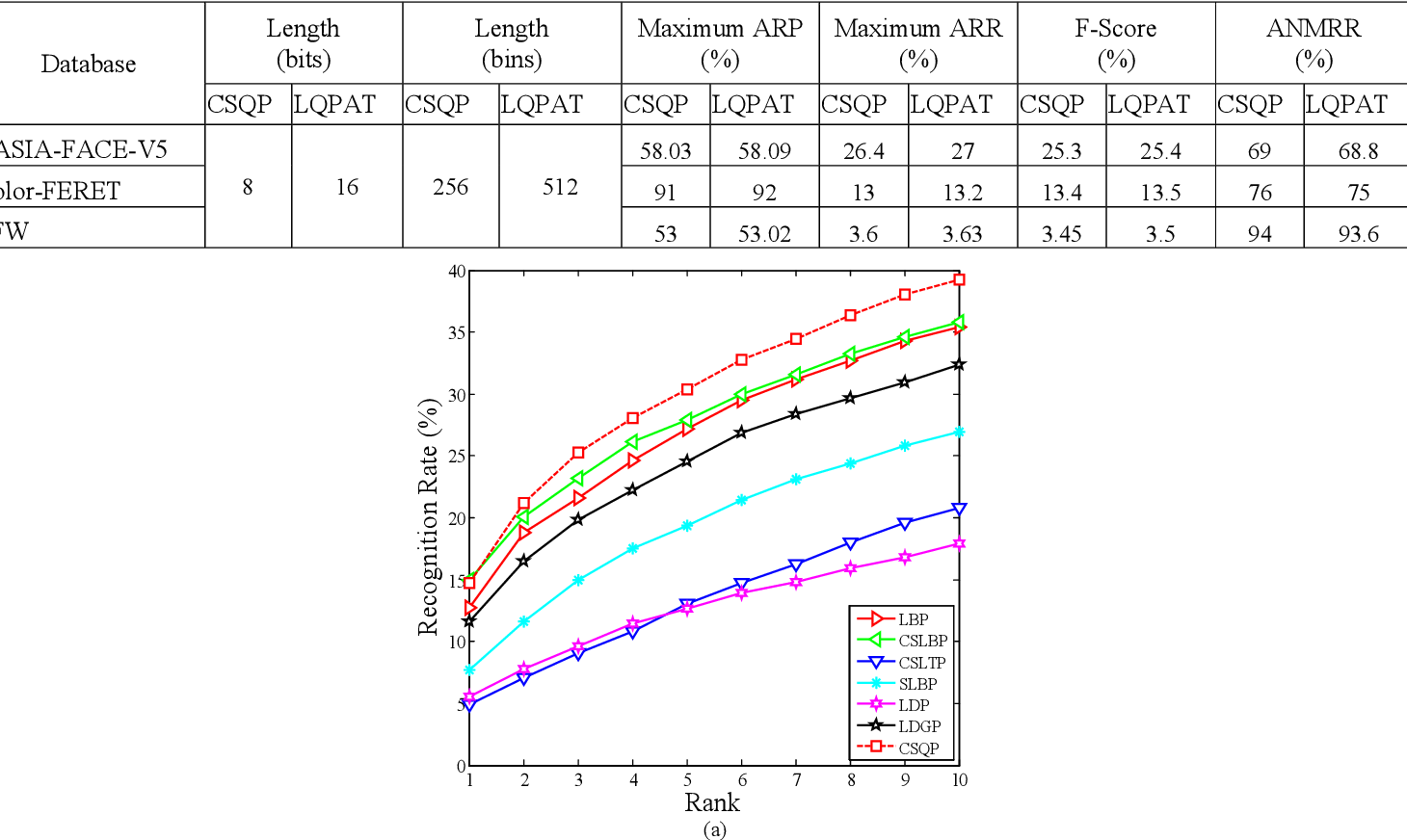 Facial features are defined as the local relationships that exist amongst the pixels of a facial image. Hand-crafted descriptors identify the relationships of the pixels in the local neighbourhood defined by the kernel. Kernel is a two dimensional matrix which is moved across the facial image. Distinctive information captured by the kernel with limited number of pixel achieves satisfactory recognition and retrieval accuracies on facial images taken under constrained environment (controlled variations in light, pose, expressions, and background). To achieve similar accuracies under unconstrained environment local neighbourhood has to be increased, in order to encode more pixels. Increasing local neighbourhood also increases the feature length of the descriptor. In this paper we propose a hand-crafted descriptor namely Centre Symmetric Quadruple Pattern (CSQP), which is structurally symmetric and encodes the facial asymmetry in quadruple space. The proposed descriptor efficiently encodes larger neighbourhood with optimal number of binary bits. It has been shown using average entropy, computed over feature images encoded with the proposed descriptor, that the CSQP captures more meaningful information as compared to state of the art descriptors. The retrieval and recognition accuracies of the proposed descriptor has been compared with state of the art hand-crafted descriptors (CSLBP, CSLTP, LDP, LBP, SLBP and LDGP) on bench mark databases namely; LFW, Colour-FERET, and CASIA-face-v5. Result analysis shows that the proposed descriptor performs well under controlled as well as uncontrolled variations in pose, illumination, background and expressions. 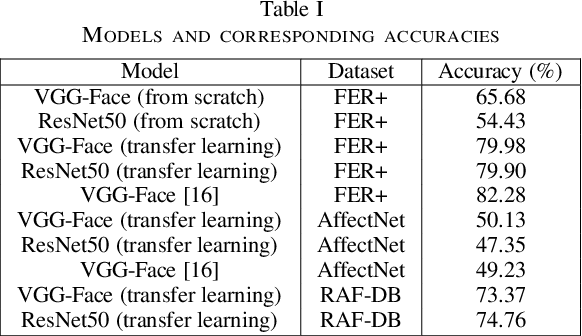 Facial expressions of emotion are a major channel in our daily communications, and it has been subject of intense research in recent years. To automatically infer facial expressions, convolutional neural network based approaches has become widely adopted due to their proven applicability to Facial Expression Recognition (FER) task.On the other hand Virtual Reality (VR) has gained popularity as an immersive multimedia platform, where FER can provide enriched media experiences. However, recognizing facial expression while wearing a head-mounted VR headset is a challenging task due to the upper half of the face being completely occluded. In this paper we attempt to overcome these issues and focus on facial expression recognition in presence of a severe occlusion where the user is wearing a head-mounted display in a VR setting. We propose a geometric model to simulate occlusion resulting from a Samsung Gear VR headset that can be applied to existing FER datasets. Then, we adopt a transfer learning approach, starting from two pretrained networks, namely VGG and ResNet. We further fine-tune the networks on FER+ and RAF-DB datasets. Experimental results show that our approach achieves comparable results to existing methods while training on three modified benchmark datasets that adhere to realistic occlusion resulting from wearing a commodity VR headset. Code for this paper is available at: https://github.com/bita-github/MRP-FER 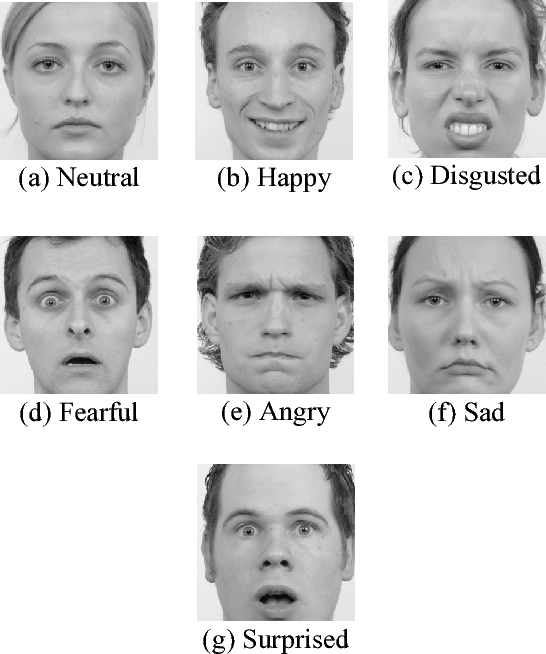 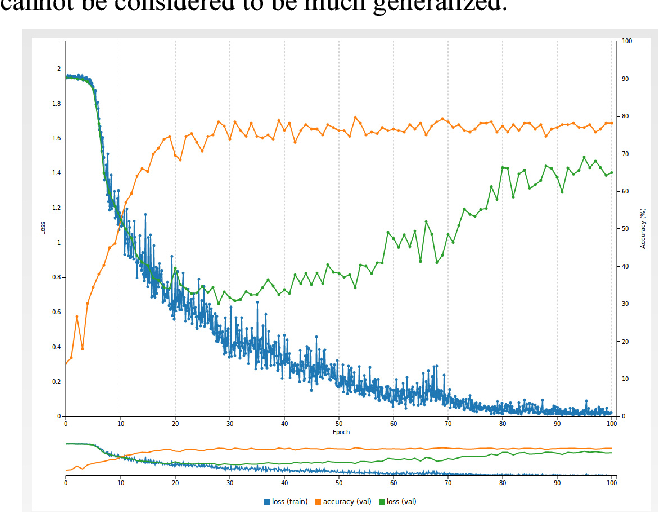 We have developed a convolutional neural network for the purpose of recognizing facial expressions in human beings. We have fine-tuned the existing convolutional neural network model trained on the visual recognition dataset used in the ILSVRC2012 to two widely used facial expression datasets - CFEE and RaFD, which when trained and tested independently yielded test accuracies of 74.79% and 95.71%, respectively. Generalization of results was evident by training on one dataset and testing on the other. Further, the image product of the cropped faces and their visual saliency maps were computed using Deep Multi-Layer Network for saliency prediction and were fed to the facial expression recognition CNN. In the most generalized experiment, we observed the top-1 accuracy in the test set to be 65.39%. General confusion trends between different facial expressions as exhibited by humans were also observed. 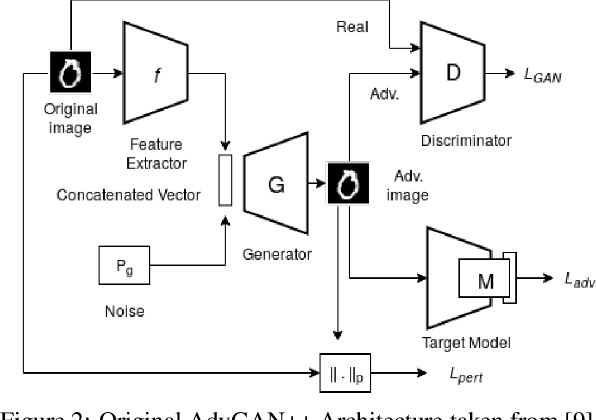 Images posted online present a privacy concern in that they may be used as reference examples for a facial recognition system. Such abuse of images is in violation of privacy rights but is difficult to counter. It is well established that adversarial example images can be created for recognition systems which are based on deep neural networks. These adversarial examples can be used to disrupt the utility of the images as reference examples or training data. In this work we use a Generative Adversarial Network (GAN) to create adversarial examples to deceive facial recognition and we achieve an acceptable success rate in fooling the face recognition. Our results reduce the training time for the GAN by removing the discriminator component. Furthermore, our results show knowledge distillation can be employed to drastically reduce the size of the resulting model without impacting performance indicating that our contribution could run comfortably on a smartphone


* 8 pages, to appear at the Media Watermarking, Security, and Forensics Conference at Electronic Imaging, January, 2022

Towards a General Deep Feature Extractor for Facial Expression Recognition

The human face conveys a significant amount of information. Through facial expressions, the face is able to communicate numerous sentiments without the need for verbalisation. Visual emotion recognition has been extensively studied. Recently several end-to-end trained deep neural networks have been proposed for this task. However, such models often lack generalisation ability across datasets. In this paper, we propose the Deep Facial Expression Vector ExtractoR (DeepFEVER), a new deep learning-based approach that learns a visual feature extractor general enough to be applied to any other facial emotion recognition task or dataset. DeepFEVER outperforms state-of-the-art results on the AffectNet and Google Facial Expression Comparison datasets. DeepFEVER's extracted features also generalise extremely well to other datasets -- even those unseen during training -- namely, the Real-World Affective Faces (RAF) dataset. 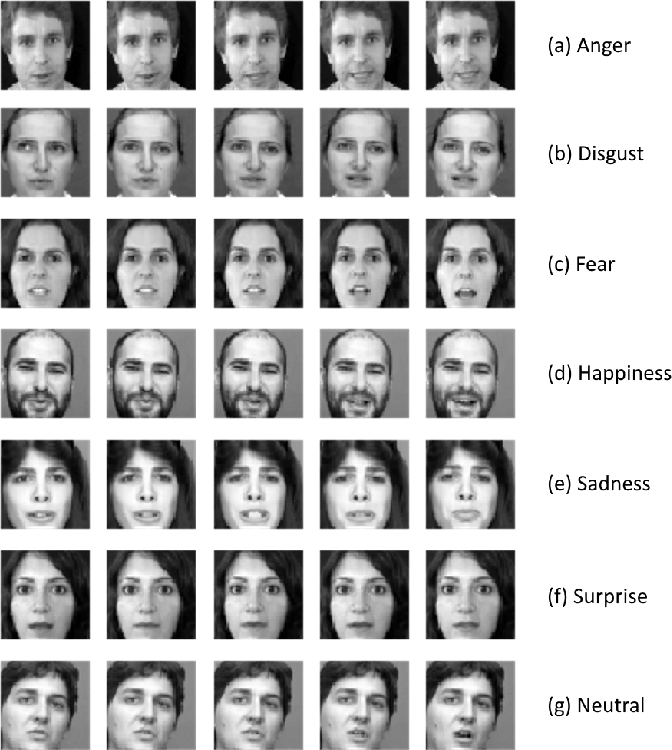 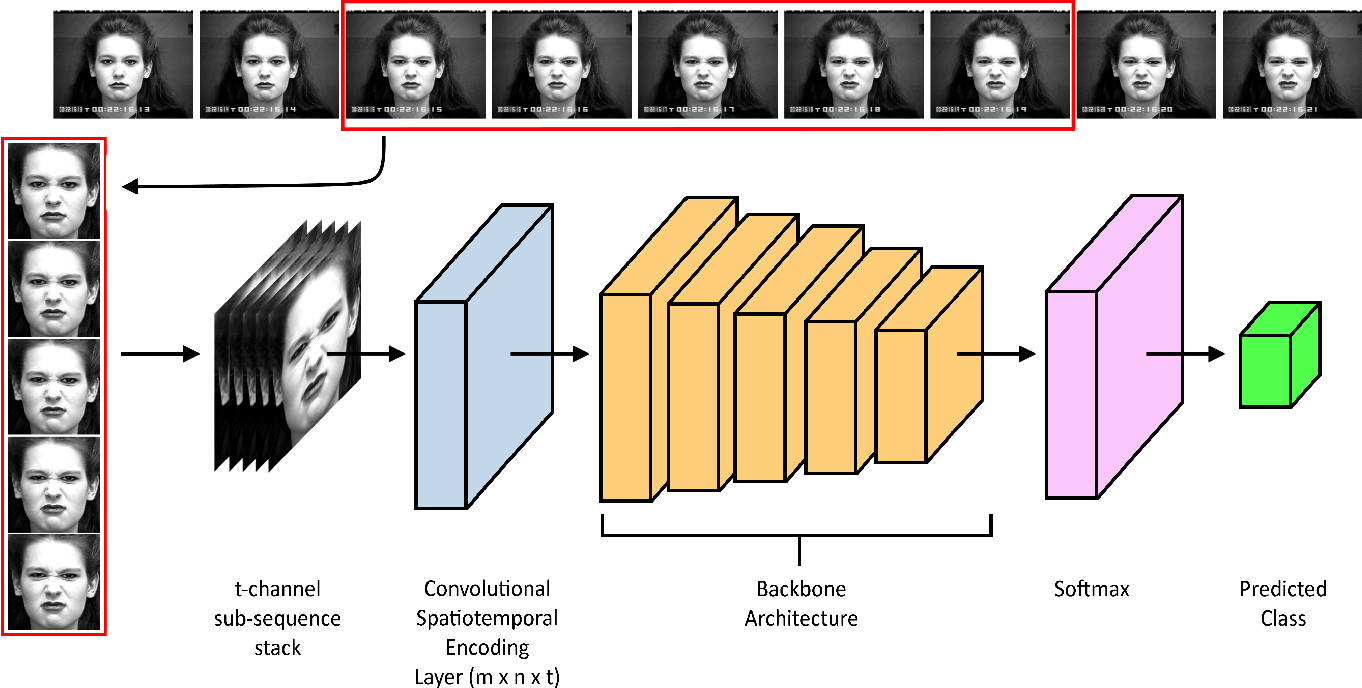 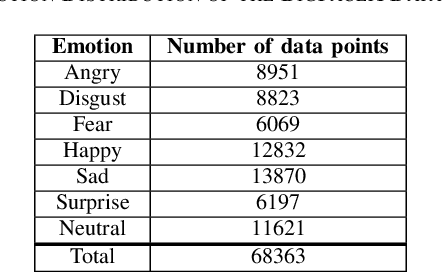 A core challenge faced by the majority of individuals with Autism Spectrum Disorder (ASD) is an impaired ability to infer other people's emotions based on their facial expressions. With significant recent advances in machine learning, one potential approach to leveraging technology to assist such individuals to better recognize facial expressions and reduce the risk of possible loneliness and depression due to social isolation is the design of computer vision-driven facial expression recognition systems. Motivated by this social need as well as the low latency requirement of such systems, this study explores a novel deep time windowed convolutional neural network design (TimeConvNets) for the purpose of real-time video facial expression recognition. More specifically, we explore an efficient convolutional deep neural network design for spatiotemporal encoding of time windowed video frame sub-sequences and study the respective balance between speed and accuracy. Furthermore, to evaluate the proposed TimeConvNet design, we introduce a more difficult dataset called BigFaceX, composed of a modified aggregation of the extended Cohn-Kanade (CK+), BAUM-1, and the eNTERFACE public datasets. Different variants of the proposed TimeConvNet design with different backbone network architectures were evaluated using BigFaceX alongside other network designs for capturing spatiotemporal information, and experimental results demonstrate that TimeConvNets can better capture the transient nuances of facial expressions and boost classification accuracy while maintaining a low inference time. 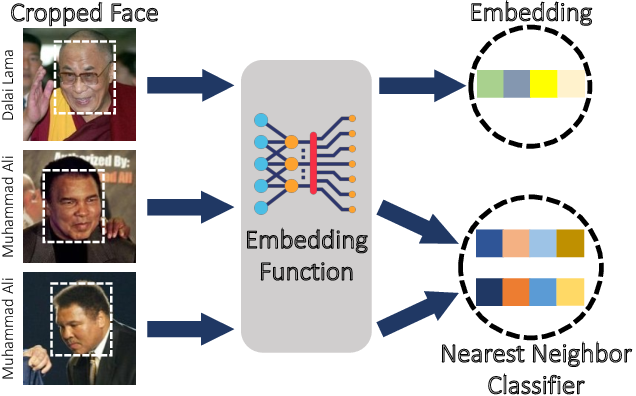 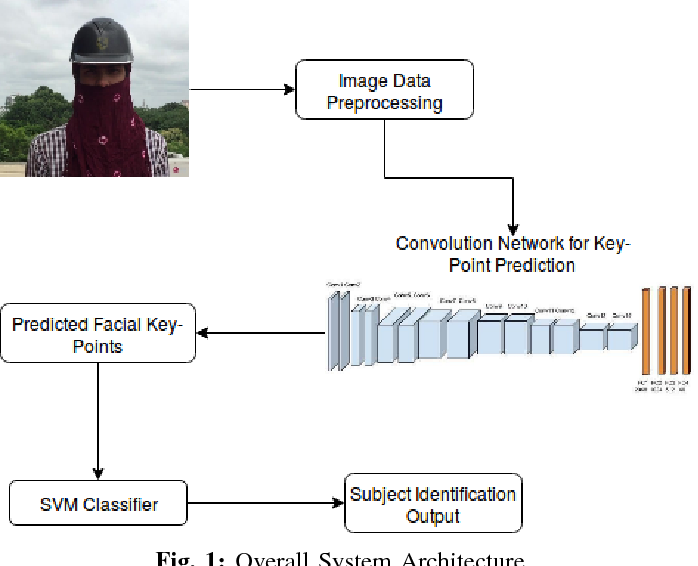 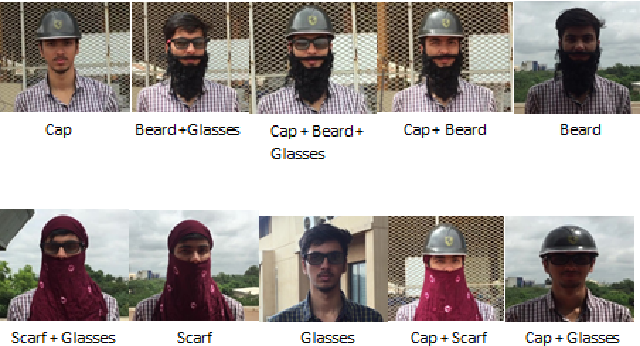 Facial recognition has always been a challeng- ing task for computer vision scientists and experts. Despite complexities arising due to variations in camera parameters, illumination and face orientations, significant progress has been made in the field with deep learning algorithms now competing with human-level accuracy. But in contrast to the recent advances in face recognition techniques, Disguised Facial Identification continues to be a tougher challenge in the field of computer vision. The modern day scenario, where security is of prime concern, regular face identification techniques do not perform as required when the faces are disguised, which calls for a different approach to handle situations where intruders have their faces masked. Along the same lines, we propose a deep learning architecture for disguised facial recognition (DFR). The algorithm put forward in this paper detects 20 facial key-points in the first stage, using a 14-layered convolutional neural network (CNN). These facial key-points are later utilized by a support vector machine (SVM) for classifying the disguised faces based on the euclidean distance ratios and angles between different facial key-points. This overall architecture imparts a basic intelligence to our system. Our key-point feature prediction accuracy is 65% while the classification rate is 72.4%. Moreover, the architecture works at 19 FPS, thereby performing in almost real-time. The efficiency of our approach is also compared with the state-of-the-art Disguised Facial Identification methods.


* Accepted at 2018 International Conference on Robotics and Computer Vision