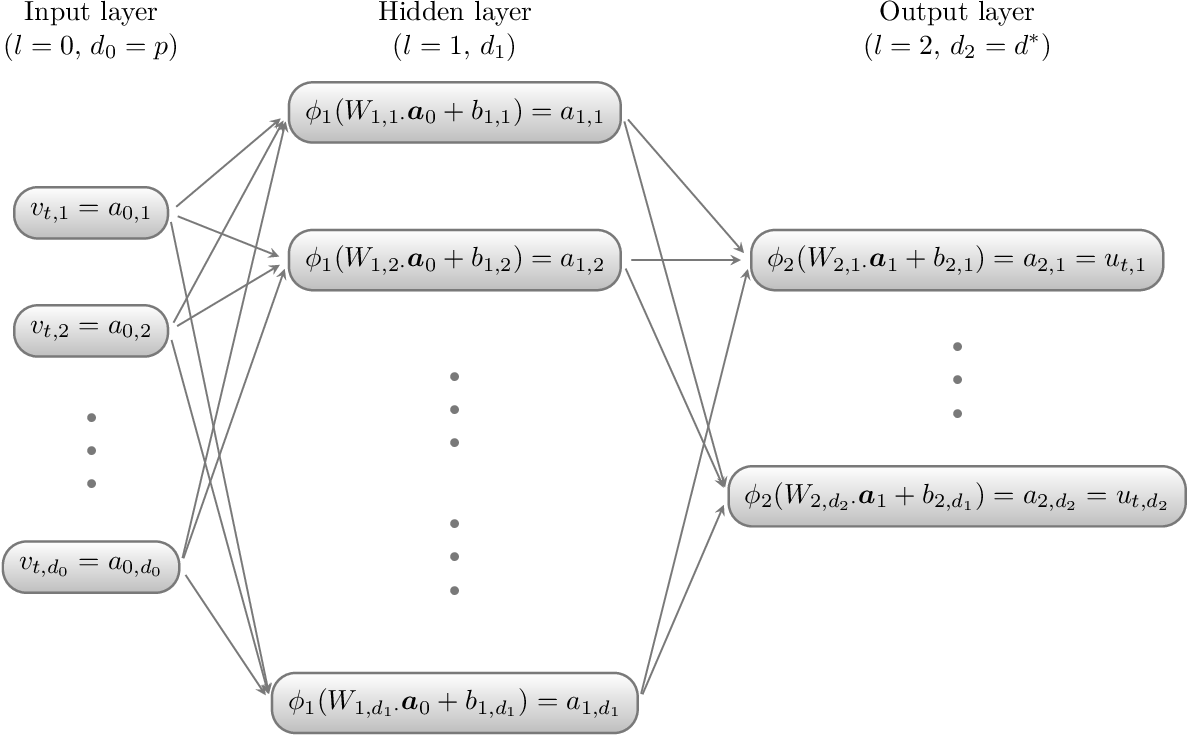 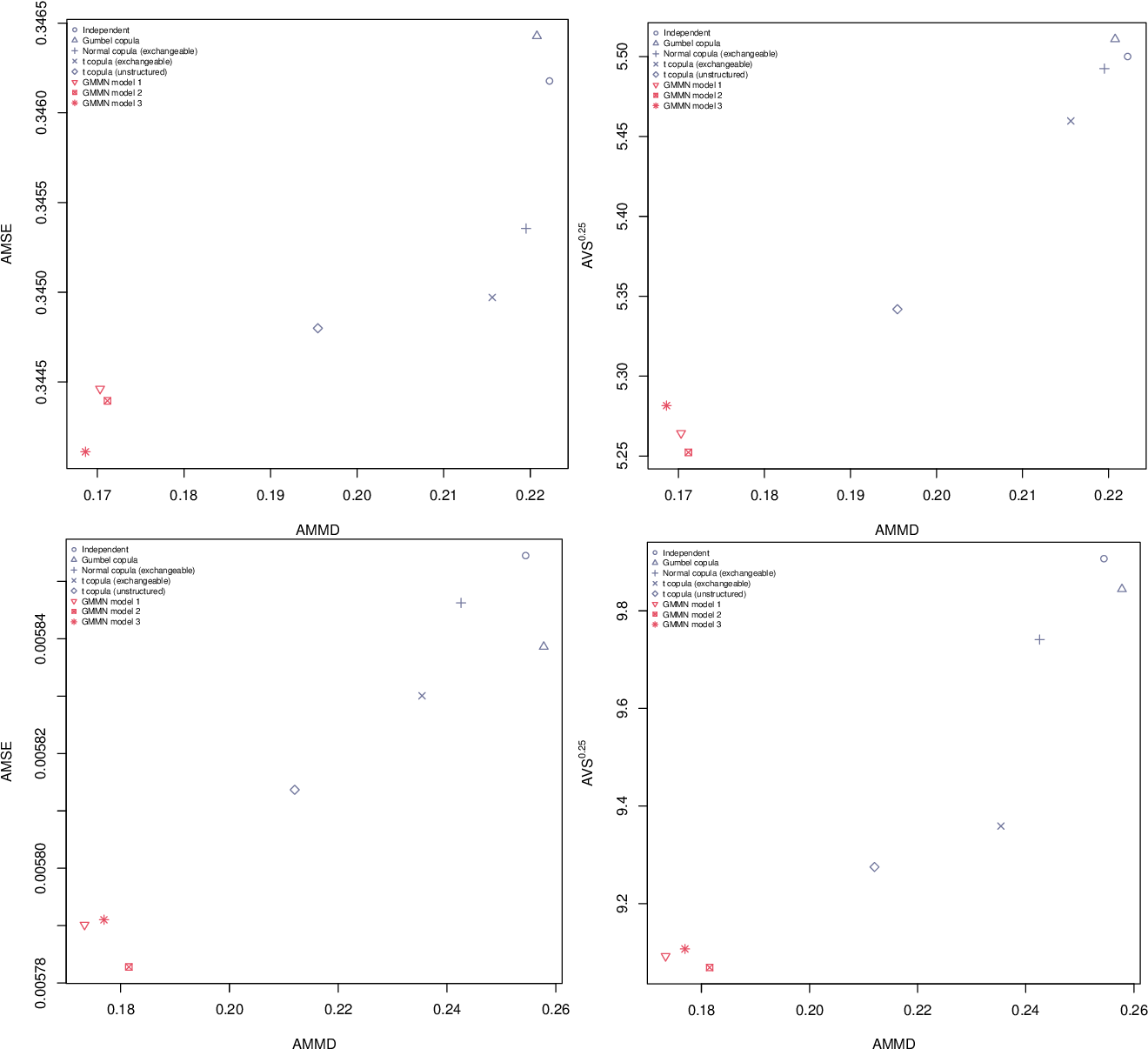 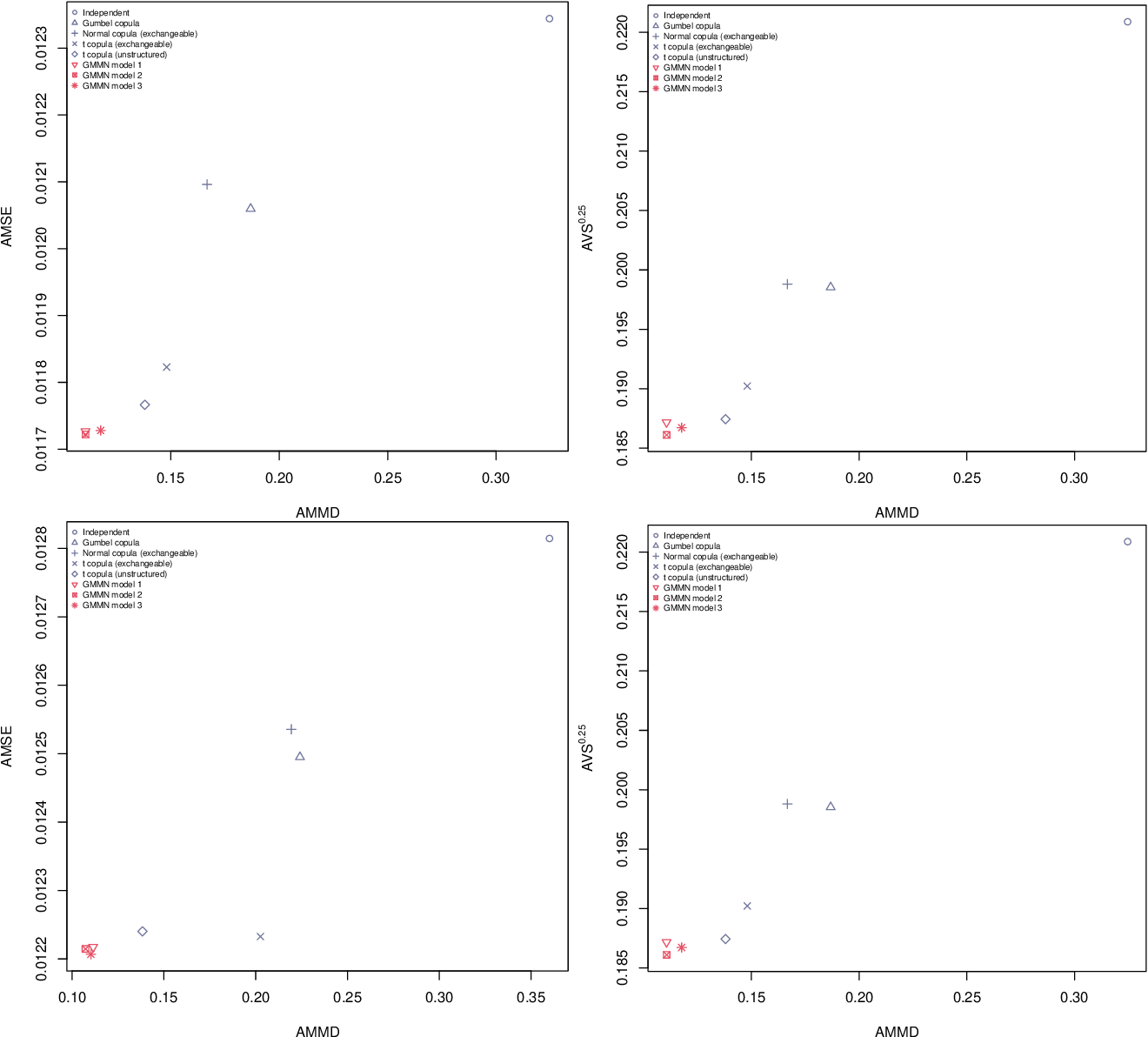 Generative moment matching networks (GMMNs) are introduced as dependence models for the joint innovation distribution of multivariate time series (MTS). Following the popular copula-GARCH approach for modeling dependent MTS data, a framework allowing us to take an alternative GMMN-GARCH approach is presented. First, ARMA-GARCH models are utilized to capture the serial dependence within each univariate marginal time series. Second, if the number of marginal time series is large, principal component analysis (PCA) is used as a dimension-reduction step. Last, the remaining cross-sectional dependence is modeled via a GMMN, our main contribution. GMMNs are highly flexible and easy to simulate from, which is a major advantage over the copula-GARCH approach. Applications involving yield curve modeling and the analysis of foreign exchange rate returns are presented to demonstrate the utility of our approach, especially in terms of producing better empirical predictive distributions and making better probabilistic forecasts. All results are reproducible with the demo GMMN_MTS_paper of the R package gnn. 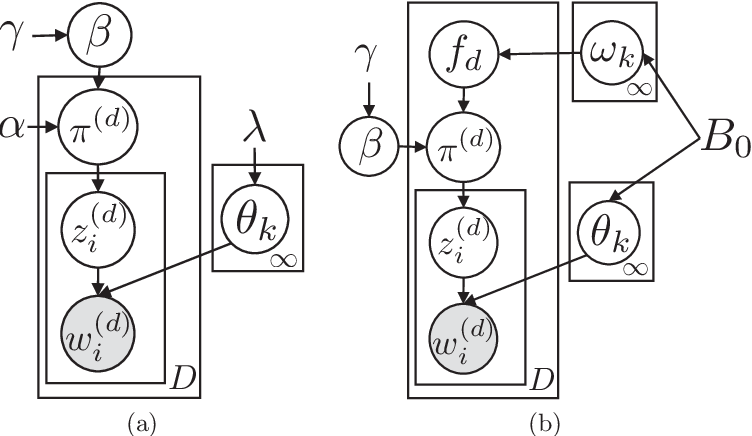 In this article we discuss some of the consequences of the mixed membership perspective on time series analysis. In its most abstract form, a mixed membership model aims to associate an individual entity with some set of attributes based on a collection of observed data. Although much of the literature on mixed membership models considers the setting in which exchangeable collections of data are associated with each member of a set of entities, it is equally natural to consider problems in which an entire time series is viewed as an entity and the goal is to characterize the time series in terms of a set of underlying dynamic attributes or "dynamic regimes". Indeed, this perspective is already present in the classical hidden Markov model, where the dynamic regimes are referred to as "states", and the collection of states realized in a sample path of the underlying process can be viewed as a mixed membership characterization of the observed time series. Our goal here is to review some of the richer modeling possibilities for time series that are provided by recent developments in the mixed membership framework. 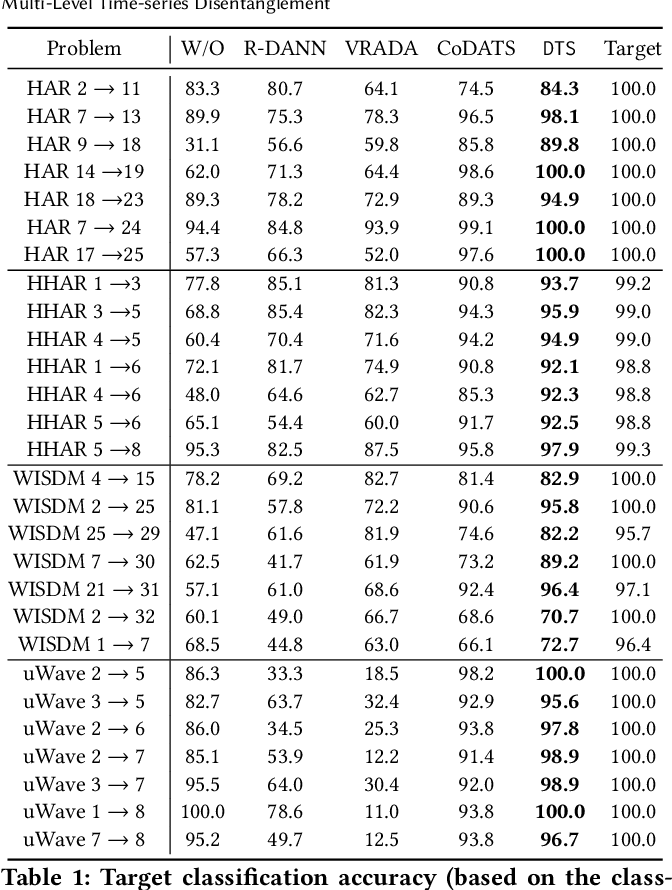 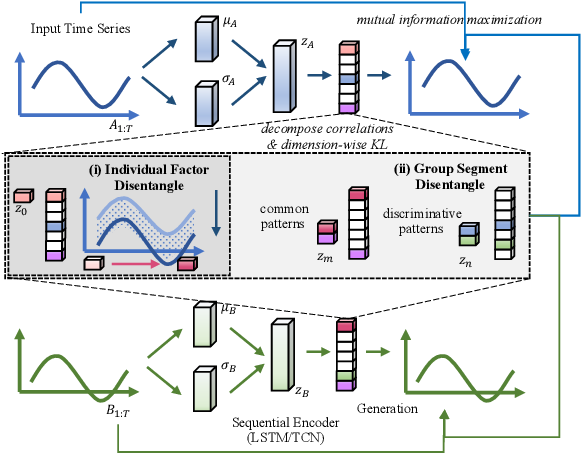 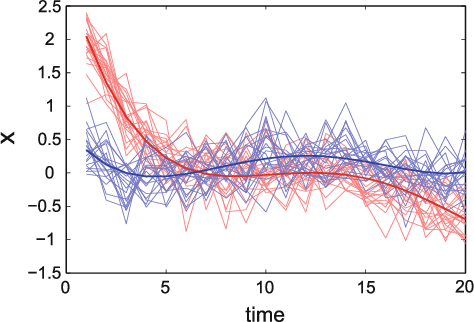 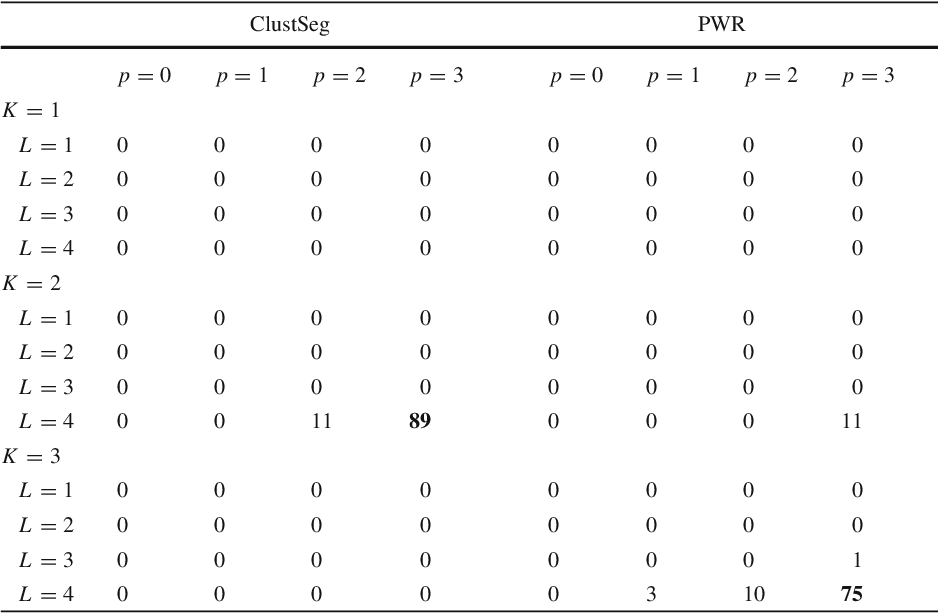 Mixture model-based clustering, usually applied to multidimensional data, has become a popular approach in many data analysis problems, both for its good statistical properties and for the simplicity of implementation of the Expectation-Maximization (EM) algorithm. Within the context of a railway application, this paper introduces a novel mixture model for dealing with time series that are subject to changes in regime. The proposed approach consists in modeling each cluster by a regression model in which the polynomial coefficients vary according to a discrete hidden process. In particular, this approach makes use of logistic functions to model the (smooth or abrupt) transitions between regimes. The model parameters are estimated by the maximum likelihood method solved by an Expectation-Maximization algorithm. The proposed approach can also be regarded as a clustering approach which operates by finding groups of time series having common changes in regime. In addition to providing a time series partition, it therefore provides a time series segmentation. The problem of selecting the optimal numbers of clusters and segments is solved by means of the Bayesian Information Criterion (BIC). The proposed approach is shown to be efficient using a variety of simulated time series and real-world time series of electrical power consumption from rail switching operations. 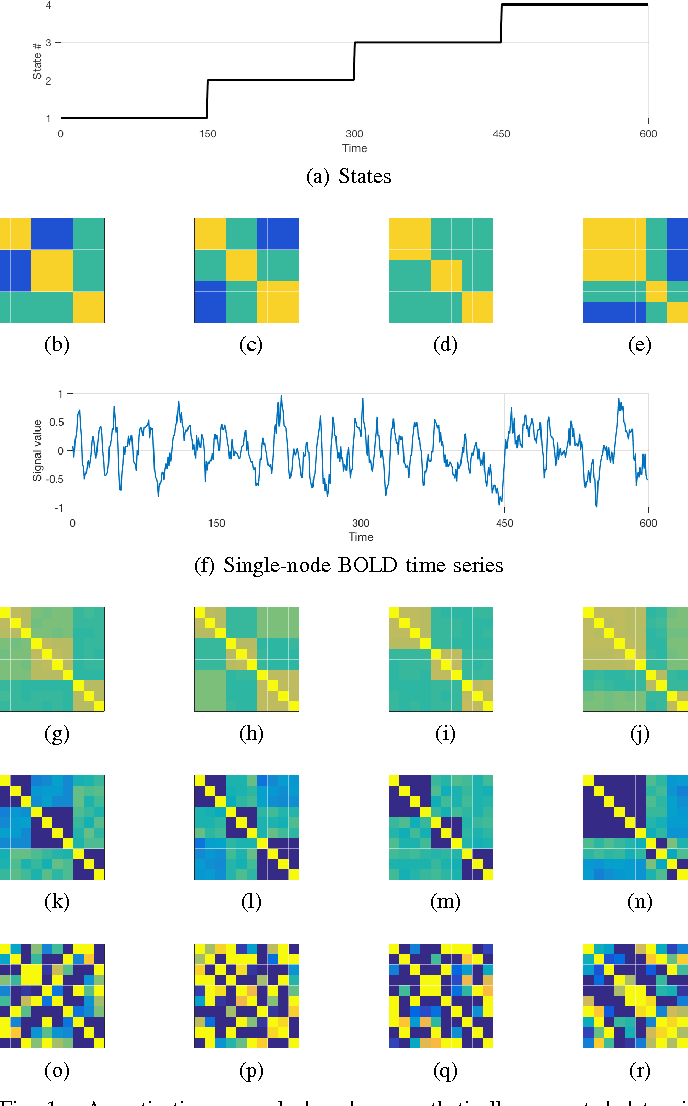 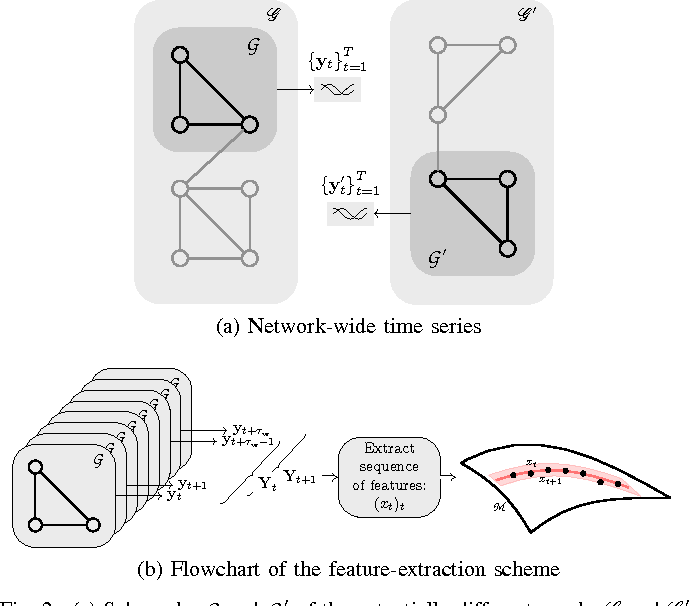 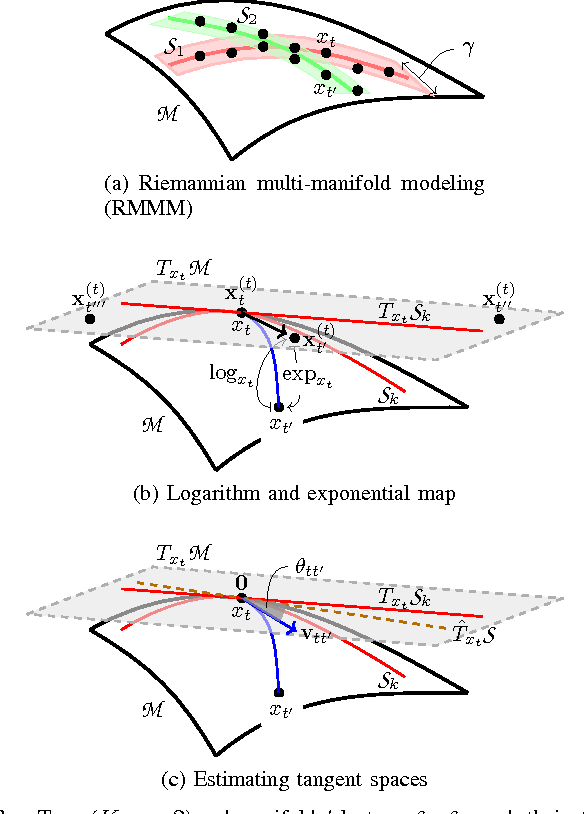 This paper advocates Riemannian multi-manifold modeling in the context of network-wide non-stationary time-series analysis. Time-series data, collected sequentially over time and across a network, yield features which are viewed as points in or close to a union of multiple submanifolds of a Riemannian manifold, and distinguishing disparate time series amounts to clustering multiple Riemannian submanifolds. To support the claim that exploiting the latent Riemannian geometry behind many statistical features of time series is beneficial to learning from network data, this paper focuses on brain networks and puts forth two feature-generation schemes for network-wide dynamic time series. The first is motivated by Granger-causality arguments and uses an auto-regressive moving average model to map low-rank linear vector subspaces, spanned by column vectors of appropriately defined observability matrices, to points into the Grassmann manifold. The second utilizes (non-linear) dependencies among network nodes by introducing kernel-based partial correlations to generate points in the manifold of positive-definite matrices. Capitilizing on recently developed research on clustering Riemannian submanifolds, an algorithm is provided for distinguishing time series based on their geometrical properties, revealed within Riemannian feature spaces. Extensive numerical tests demonstrate that the proposed framework outperforms classical and state-of-the-art techniques in clustering brain-network states/structures hidden beneath synthetic fMRI time series and brain-activity signals generated from real brain-network structural connectivity matrices.

The estimation of treatment effects is a pervasive problem in medicine. Existing methods for estimating treatment effects from longitudinal observational data assume that there are no hidden confounders. This assumption is not testable in practice and, if it does not hold, leads to biased estimates. In this paper, we develop the Time Series Deconfounder, a method that leverages the assignment of multiple treatments over time to enable the estimation of treatment effects even in the presence of hidden confounders. The Time Series Deconfounder uses a novel recurrent neural network architecture with multitask output to build a factor model over time and infer substitute confounders that render the assigned treatments conditionally independent. Then it performs causal inference using the substitute confounders. We provide a theoretical analysis for obtaining unbiased causal effects of time-varying exposures using the Time Series Deconfounder. Using simulations we show the effectiveness of our method in deconfounding the estimation of treatment responses in longitudinal data.

By trade we usually mean the exchange of goods between states and countries. International trade acts as a barometer of the economic prosperity index and every country is overly dependent on resources, so international trade is essential. Trade is significant to the global health crisis, saving lives and livelihoods. By collecting the dataset called "Effects of COVID19 on trade" from the state website NZ Tatauranga Aotearoa, we have developed a sustainable prediction process on the effects of COVID-19 in world trade using a deep learning model. In the research, we have given a 180-day trade forecast where the ups and downs of daily imports and exports have been accurately predicted in the Covid-19 period. In order to fulfill this prediction, we have taken data from 1st January 2015 to 30th May 2021 for all countries, all commodities, and all transport systems and have recovered what the world trade situation will be in the next 180 days during the Covid-19 period. The deep learning method has received equal attention from both investors and researchers in the field of in-depth observation. This study predicts global trade using the Long-Short Term Memory. Time series analysis can be useful to see how a given asset, security, or economy changes over time. Time series analysis plays an important role in past analysis to get different predictions of the future and it can be observed that some factors affect a particular variable from period to period. Through the time series it is possible to observe how various economic changes or trade effects change over time. By reviewing these changes, one can be aware of the steps to be taken in the future and a country can be more careful in terms of imports and exports accordingly. From our time series analysis, it can be said that the LSTM model has given a very gracious thought of the future world import and export situation in terms of trade.

Recently, there has been a surge of Transformer-based solutions for the time series forecasting (TSF) task, especially for the challenging long-term TSF problem. Transformer architecture relies on self-attention mechanisms to effectively extract the semantic correlations between paired elements in a long sequence, which is permutation-invariant and anti-ordering to some extent. However, in time series modeling, we are to extract the temporal relations among an ordering set of continuous points. Consequently, whether Transformer-based techniques are the right solutions for long-term time series forecasting is an interesting problem to investigate, despite the performance improvements shown in these studies. In this work, we question the validity of Transformer-based TSF solutions. In their experiments, the compared (non-Transformer) baselines are mainly autoregressive forecasting solutions, which usually have a poor long-term prediction capability due to inevitable error accumulation effects. In contrast, we use an embarrassingly simple architecture named DLinear that conducts direct multi-step (DMS) forecasting for comparison. DLinear decomposes the time series into a trend and a remainder series and employs two one-layer linear networks to model these two series for the forecasting task. Surprisingly, it outperforms existing complex Transformer-based models in most cases by a large margin. Therefore, we conclude that the relatively higher long-term forecasting accuracy of Transformer-based TSF solutions shown in existing works has little to do with the temporal relation extraction capabilities of the Transformer architecture. Instead, it is mainly due to the non-autoregressive DMS forecasting strategy used in them. We hope this study also advocates revisiting the validity of Transformer-based solutions for other time series analysis tasks (e.g., anomaly detection) in the future.


* Code is available at https://github.com/cure-lab/DLinear 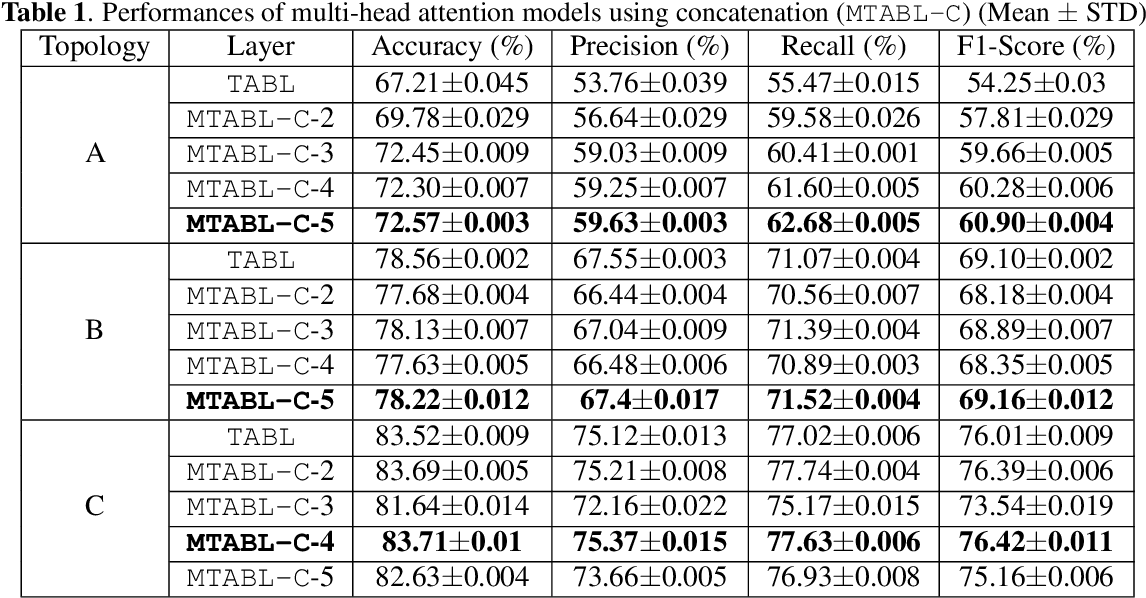 Financial time-series forecasting is one of the most challenging domains in the field of time-series analysis. This is mostly due to the highly non-stationary and noisy nature of financial time-series data. With progressive efforts of the community to design specialized neural networks incorporating prior domain knowledge, many financial analysis and forecasting problems have been successfully tackled. The temporal attention mechanism is a neural layer design that recently gained popularity due to its ability to focus on important temporal events. In this paper, we propose a neural layer based on the ideas of temporal attention and multi-head attention to extend the capability of the underlying neural network in focusing simultaneously on multiple temporal instances. The effectiveness of our approach is validated using large-scale limit-order book market data to forecast the direction of mid-price movements. Our experiments show that the use of multi-head temporal attention modules leads to enhanced prediction performances compared to baseline models.