Computational inference of aesthetics is an ill-defined task due to its subjective nature. Many datasets have been proposed to tackle the problem by providing pairs of images and aesthetic scores based on human ratings. However, humans are better at expressing their opinion, taste, and emotions by means of language rather than summarizing them in a single number. In fact, photo critiques provide much richer information as they reveal how and why users rate the aesthetics of visual stimuli. In this regard, we propose the Reddit Photo Critique Dataset (RPCD), which contains tuples of image and photo critiques. RPCD consists of 74K images and 220K comments and is collected from a Reddit community used by hobbyists and professional photographers to improve their photography skills by leveraging constructive community feedback. The proposed dataset differs from previous aesthetics datasets mainly in three aspects, namely (i) the large scale of the dataset and the extension of the comments criticizing different aspects of the image, (ii) it contains mostly UltraHD images, and (iii) it can easily be extended to new data as it is collected through an automatic pipeline. To the best of our knowledge, in this work, we propose the first attempt to estimate the aesthetic quality of visual stimuli from the critiques. To this end, we exploit the polarity of the sentiment of criticism as an indicator of aesthetic judgment. We demonstrate how sentiment polarity correlates positively with the aesthetic judgment available for two aesthetic assessment benchmarks. Finally, we experiment with several models by using the sentiment scores as a target for ranking images. Dataset and baselines are available (https://github.com/mediatechnologycenter/aestheval). 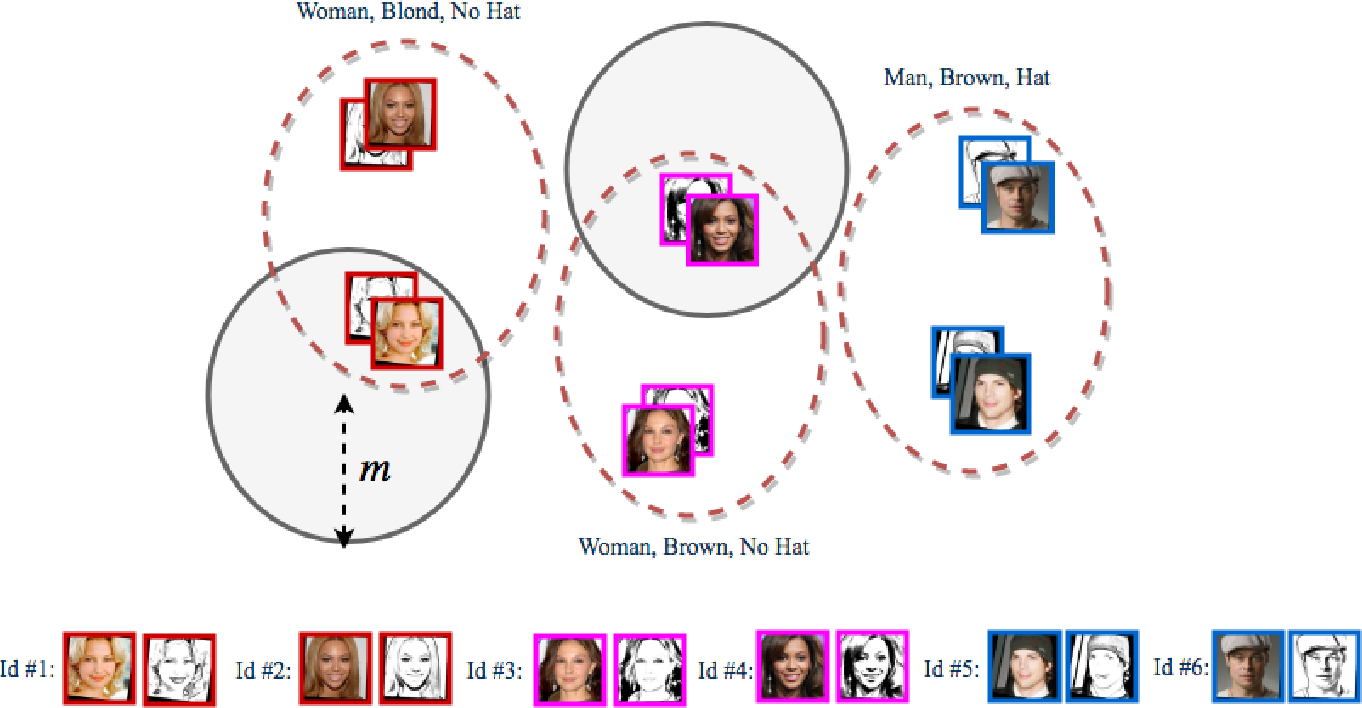 In this paper, we present a deep coupled framework to address the problem of matching sketch image against a gallery of mugshots. Face sketches have the essential in- formation about the spatial topology and geometric details of faces while missing some important facial attributes such as ethnicity, hair, eye, and skin color. We propose a cou- pled deep neural network architecture which utilizes facial attributes in order to improve the sketch-photo recognition performance. The proposed Attribute-Assisted Deep Con- volutional Neural Network (AADCNN) method exploits the facial attributes and leverages the loss functions from the facial attributes identification and face verification tasks in order to learn rich discriminative features in a common em- bedding subspace. The facial attribute identification task increases the inter-personal variations by pushing apart the embedded features extracted from individuals with differ- ent facial attributes, while the verification task reduces the intra-personal variations by pulling together all the fea- tures that are related to one person. The learned discrim- inative features can be well generalized to new identities not seen in the training data. The proposed architecture is able to make full use of the sketch and complementary fa- cial attribute information to train a deep model compared to the conventional sketch-photo recognition methods. Exten- sive experiments are performed on composite (E-PRIP) and semi-forensic (IIIT-D semi-forensic) datasets. The results show the superiority of our method compared to the state- of-the-art models in sketch-photo recognition algorithms

DeepTeeth: A Teeth-photo Based Human Authentication System for Mobile and Hand-held Devices 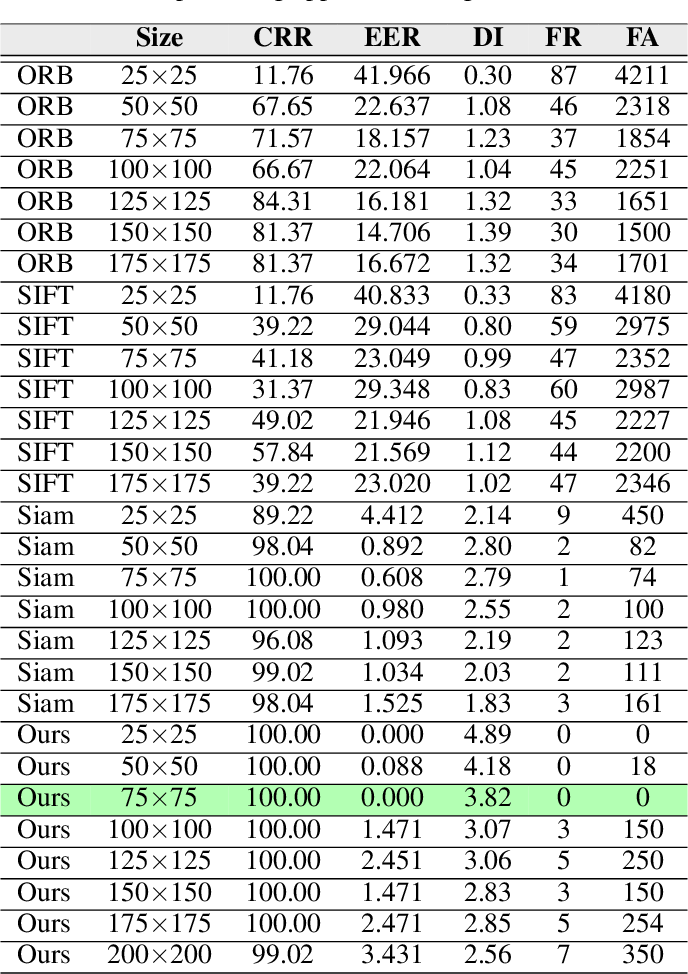 This paper proposes teeth-photo, a new biometric modality for human authentication on mobile and hand held devices. Biometrics samples are acquired using the camera mounted on mobile device with the help of a mobile application having specific markers to register the teeth area. Region of interest (RoI) is then extracted using the markers and the obtained sample is enhanced using contrast limited adaptive histogram equalization (CLAHE) for better visual clarity. We propose a deep learning architecture and novel regularization scheme to obtain highly discriminative embedding for small size RoI. Proposed custom loss function was able to achieve perfect classification for the tiny RoI of $75\times 75$ size. The model is end-to-end and few-shot and therefore is very efficient in terms of time and energy requirements. The system can be used in many ways including device unlocking and secure authentication. To the best of our understanding, this is the first work on teeth-photo based authentication for mobile device. Experiments have been conducted on an in-house teeth-photo database collected using our application. The database is made publicly available. Results have shown that the proposed system has perfect accuracy. 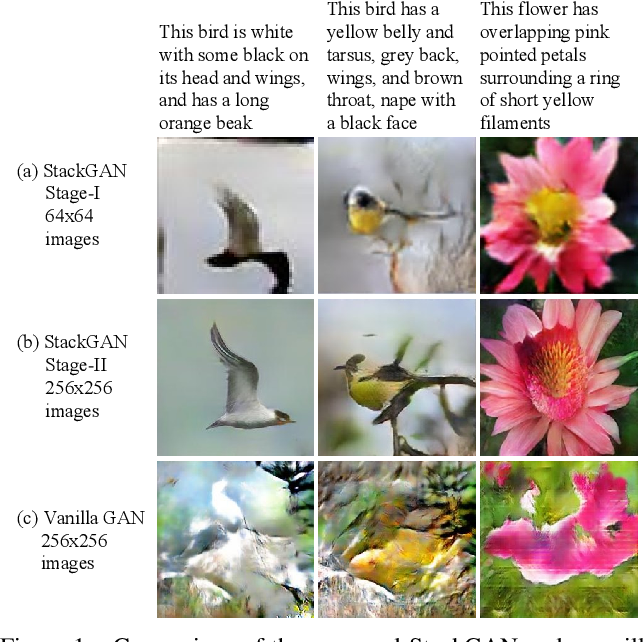 Synthesizing high-quality images from text descriptions is a challenging problem in computer vision and has many practical applications. Samples generated by existing text-to-image approaches can roughly reflect the meaning of the given descriptions, but they fail to contain necessary details and vivid object parts. In this paper, we propose Stacked Generative Adversarial Networks (StackGAN) to generate 256x256 photo-realistic images conditioned on text descriptions. We decompose the hard problem into more manageable sub-problems through a sketch-refinement process. The Stage-I GAN sketches the primitive shape and colors of the object based on the given text description, yielding Stage-I low-resolution images. The Stage-II GAN takes Stage-I results and text descriptions as inputs, and generates high-resolution images with photo-realistic details. It is able to rectify defects in Stage-I results and add compelling details with the refinement process. To improve the diversity of the synthesized images and stabilize the training of the conditional-GAN, we introduce a novel Conditioning Augmentation technique that encourages smoothness in the latent conditioning manifold. Extensive experiments and comparisons with state-of-the-arts on benchmark datasets demonstrate that the proposed method achieves significant improvements on generating photo-realistic images conditioned on text descriptions. 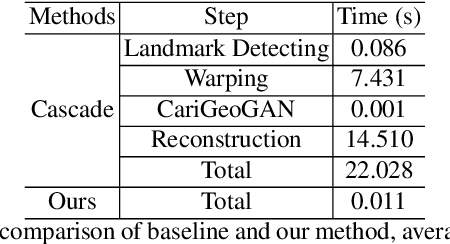 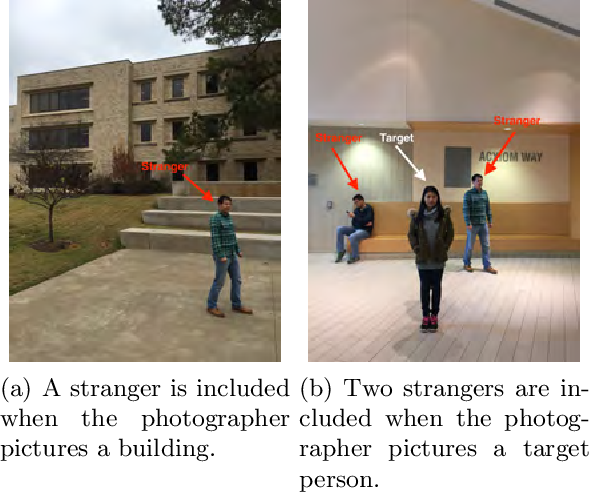 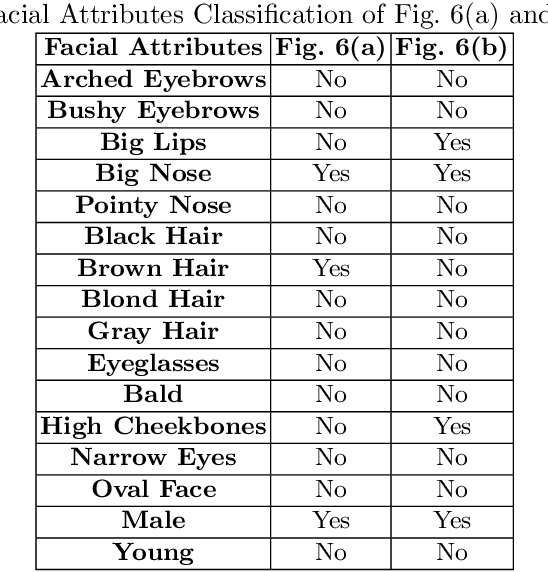 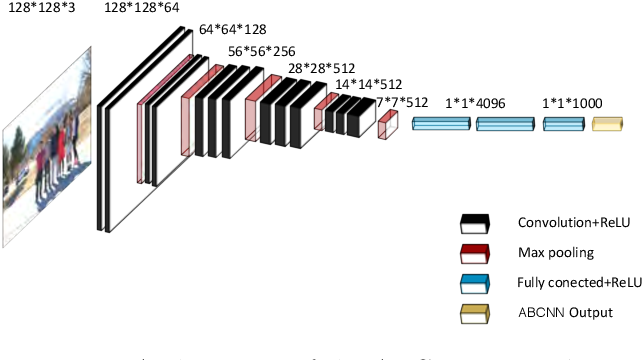 Camera is a standard on-board sensor of modern mobile phones. It makes photo taking popular due to its convenience and high resolution. However, when users take a photo of a scenery, a building or a target person, a stranger may also be unintentionally captured in the photo. Such photos expose the location and activity of strangers, and hence may breach their privacy. In this paper, we propose a cooperative mobile photographing scheme called PoliteCamera to protect strangers' privacy. Through the cooperation between a photographer and a stranger, the stranger's face in a photo can be automatically blurred upon his request when the photo is taken. Since multiple strangers nearby the photographer might send out blurring requests but not all of them are in the photo, an adapted balanced convolutional neural network (ABCNN) is proposed to determine whether the requesting stranger is in the photo based on facial attributes. Evaluations demonstrate that the ABCNN can accurately predict facial attributes and PoliteCamera can provide accurate privacy protection for strangers. 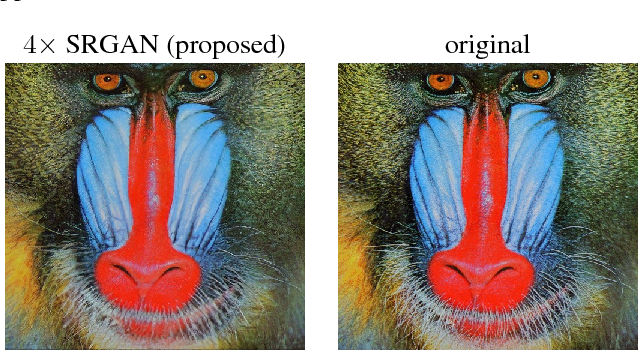 Despite the breakthroughs in accuracy and speed of single image super-resolution using faster and deeper convolutional neural networks, one central problem remains largely unsolved: how do we recover the finer texture details when we super-resolve at large upscaling factors? The behavior of optimization-based super-resolution methods is principally driven by the choice of the objective function. Recent work has largely focused on minimizing the mean squared reconstruction error. The resulting estimates have high peak signal-to-noise ratios, but they are often lacking high-frequency details and are perceptually unsatisfying in the sense that they fail to match the fidelity expected at the higher resolution. In this paper, we present SRGAN, a generative adversarial network (GAN) for image super-resolution (SR). To our knowledge, it is the first framework capable of inferring photo-realistic natural images for 4x upscaling factors. To achieve this, we propose a perceptual loss function which consists of an adversarial loss and a content loss. The adversarial loss pushes our solution to the natural image manifold using a discriminator network that is trained to differentiate between the super-resolved images and original photo-realistic images. In addition, we use a content loss motivated by perceptual similarity instead of similarity in pixel space. Our deep residual network is able to recover photo-realistic textures from heavily downsampled images on public benchmarks. An extensive mean-opinion-score (MOS) test shows hugely significant gains in perceptual quality using SRGAN. The MOS scores obtained with SRGAN are closer to those of the original high-resolution images than to those obtained with any state-of-the-art method. 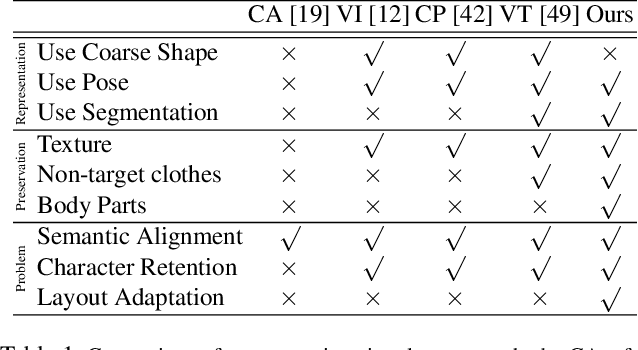 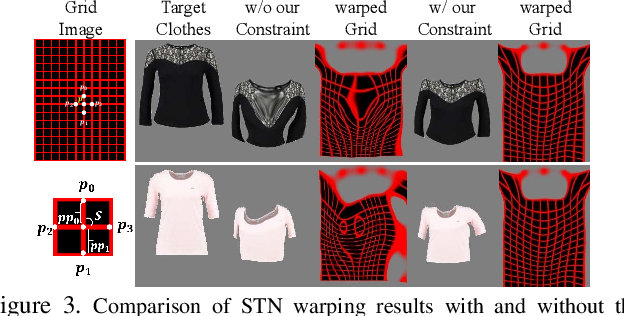 Image visual try-on aims at transferring a target clothing image onto a reference person, and has become a hot topic in recent years. Prior arts usually focus on preserving the character of a clothing image (e.g. texture, logo, embroidery) when warping it to arbitrary human pose. However, it remains a big challenge to generate photo-realistic try-on images when large occlusions and human poses are presented in the reference person. To address this issue, we propose a novel visual try-on network, namely Adaptive Content Generating and Preserving Network (ACGPN). In particular, ACGPN first predicts semantic layout of the reference image that will be changed after try-on (e.g. long sleeve shirt$\rightarrow$arm, arm$\rightarrow$jacket), and then determines whether its image content needs to be generated or preserved according to the predicted semantic layout, leading to photo-realistic try-on and rich clothing details. ACGPN generally involves three major modules. First, a semantic layout generation module utilizes semantic segmentation of the reference image to progressively predict the desired semantic layout after try-on. Second, a clothes warping module warps clothing images according to the generated semantic layout, where a second-order difference constraint is introduced to stabilize the warping process during training. Third, an inpainting module for content fusion integrates all information (e.g. reference image, semantic layout, warped clothes) to adaptively produce each semantic part of human body. In comparison to the state-of-the-art methods, ACGPN can generate photo-realistic images with much better perceptual quality and richer fine-details. 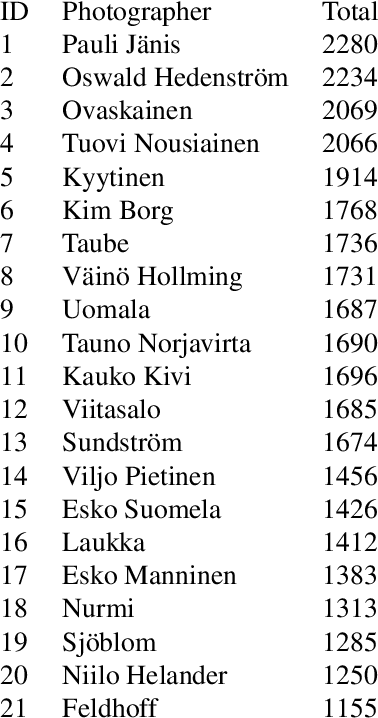 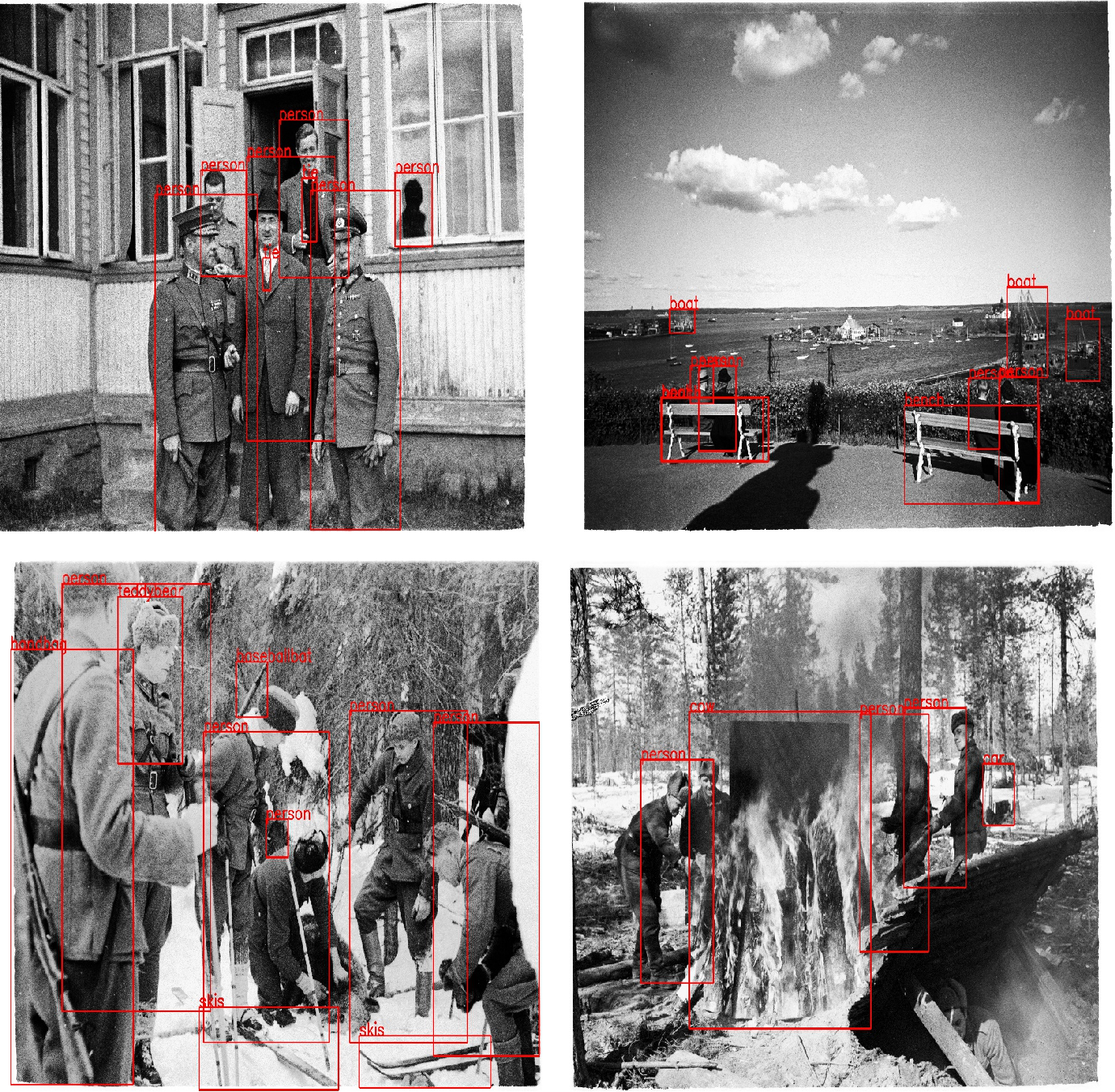 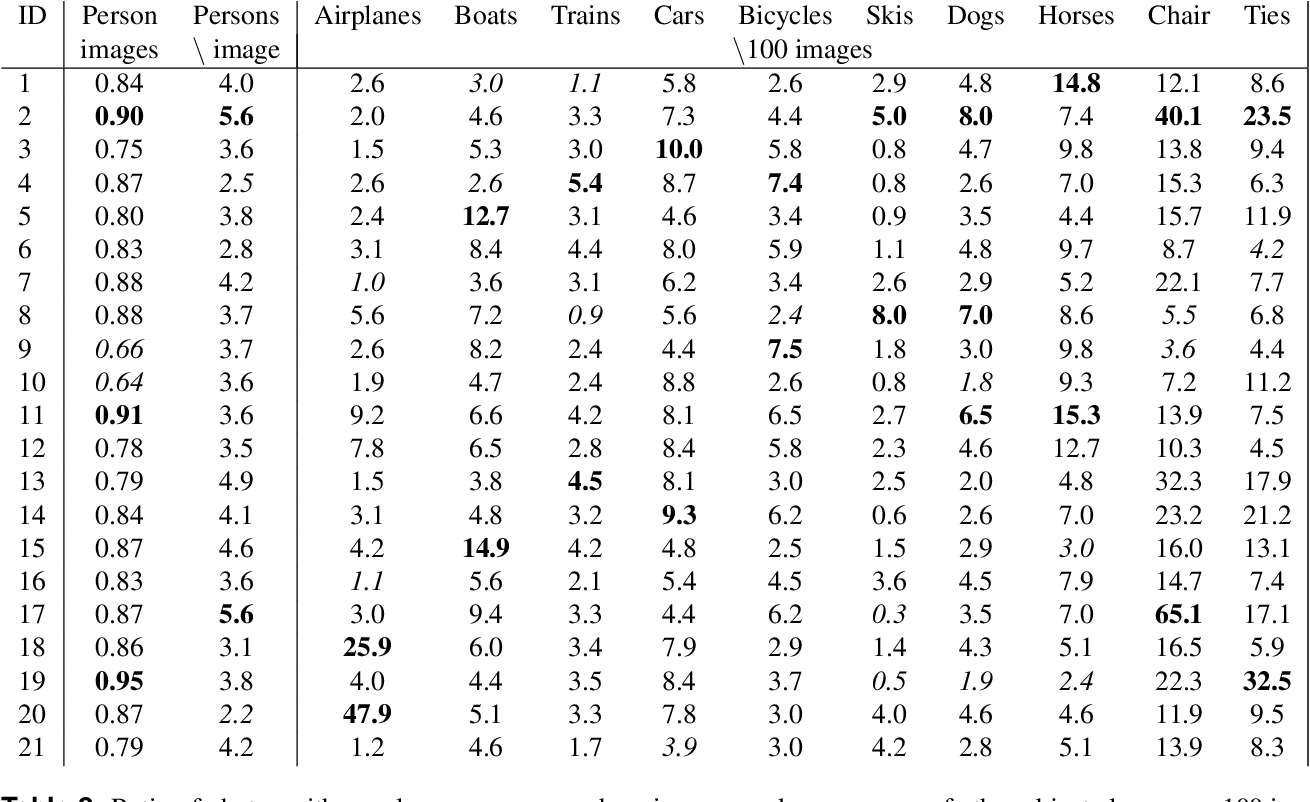 In this paper, we demonstrate the benefits of using state-of-the-art machine learning methods in the analysis of historical photo archives. Specifically, we analyze prominent Finnish World War II photographers, who have captured high numbers of photographs in the publicly available SA photo archive, which contains 160,000 photographs from Finnish Winter, Continuation, and Lapland Wars captures in 1939-1945. We were able to find some special characteristics for different photographers in terms of their typical photo content and photo types (e.g., close-ups vs. overview images, number of people). Furthermore, we managed to train a neural network that can successfully recognize the photographer from some of the photos, which shows that such photos are indeed characteristic for certain photographers. We further analyze the similarities and differences between the photographers using the features extracted from the photographer classifier network. All the extracted information will help historical and societal studies over the photo archive. 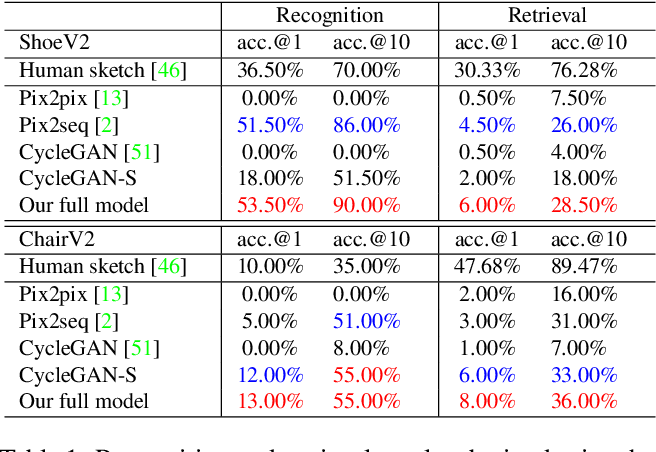 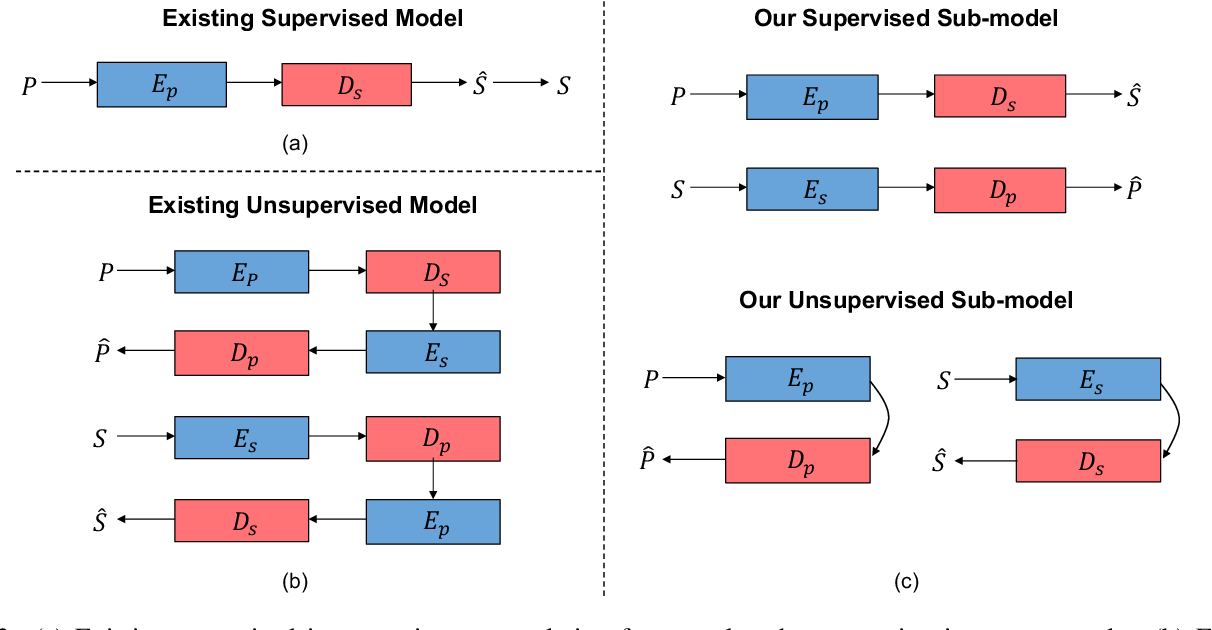 To see is to sketch -- free-hand sketching naturally builds ties between human and machine vision. In this paper, we present a novel approach for translating an object photo to a sketch, mimicking the human sketching process. This is an extremely challenging task because the photo and sketch domains differ significantly. Furthermore, human sketches exhibit various levels of sophistication and abstraction even when depicting the same object instance in a reference photo. This means that even if photo-sketch pairs are available, they only provide weak supervision signal to learn a translation model. Compared with existing supervised approaches that solve the problem of D(E(photo)) -> sketch, where E($\cdot$) and D($\cdot$) denote encoder and decoder respectively, we take advantage of the inverse problem (e.g., D(E(sketch)) -> photo), and combine with the unsupervised learning tasks of within-domain reconstruction, all within a multi-task learning framework. Compared with existing unsupervised approaches based on cycle consistency (i.e., D(E(D(E(photo)))) -> photo), we introduce a shortcut consistency enforced at the encoder bottleneck (e.g., D(E(photo)) -> photo) to exploit the additional self-supervision. Both qualitative and quantitative results show that the proposed model is superior to a number of state-of-the-art alternatives. We also show that the synthetic sketches can be used to train a better fine-grained sketch-based image retrieval (FG-SBIR) model, effectively alleviating the problem of sketch data scarcity.