Most existing neural network models for music generation explore how to generate music bars, then directly splice the music bars into a song. However, these methods do not explore the relationship between the bars, and the connected song as a whole has no musical form structure and sense of musical direction. To address this issue, we propose a Multi-model Multi-task Hierarchical Conditional VAE-GAN (Variational Autoencoder-Generative adversarial networks) networks, named MIDI-Sandwich, which combines musical knowledge, such as musical form, tonic, and melodic motion. The MIDI-Sandwich has two submodels: Hierarchical Conditional Variational Autoencoder (HCVAE) and Hierarchical Conditional Generative Adversarial Network (HCGAN). The HCVAE uses hierarchical structure. The underlying layer of HCVAE uses Local Conditional Variational Autoencoder (L-CVAE) to generate a music bar which is pre-specified by the First and Last Notes (FLN). The upper layer of HCVAE uses Global Variational Autoencoder(G-VAE) to analyze the latent vector sequence generated by the L-CVAE encoder, to explore the musical relationship between the bars, and to produce the song pieced together by multiple music bars generated by the L-CVAE decoder, which makes the song both have musical structure and sense of direction. At the same time, the HCVAE shares a part of itself with the HCGAN to further improve the performance of the generated music. The MIDI-Sandwich is validated on the Nottingham dataset and is able to generate a single-track melody sequence (17x8 beats), which is superior to the length of most of the generated models (8 to 32 beats). Meanwhile, by referring to the experimental methods of many classical kinds of literature, the quality evaluation of the generated music is performed. The above experiments prove the validity of the model. 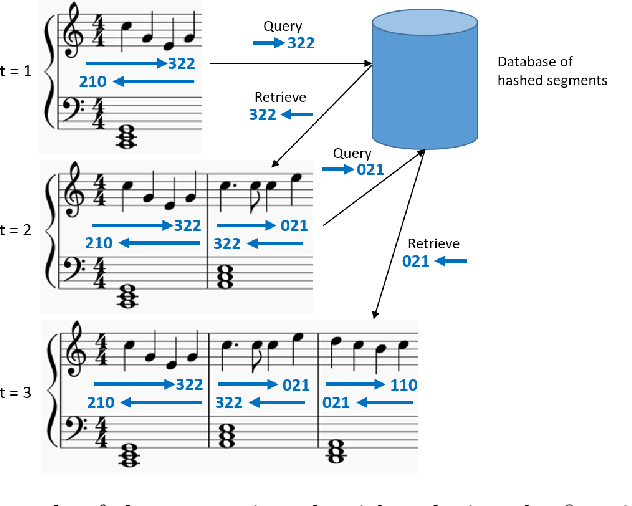 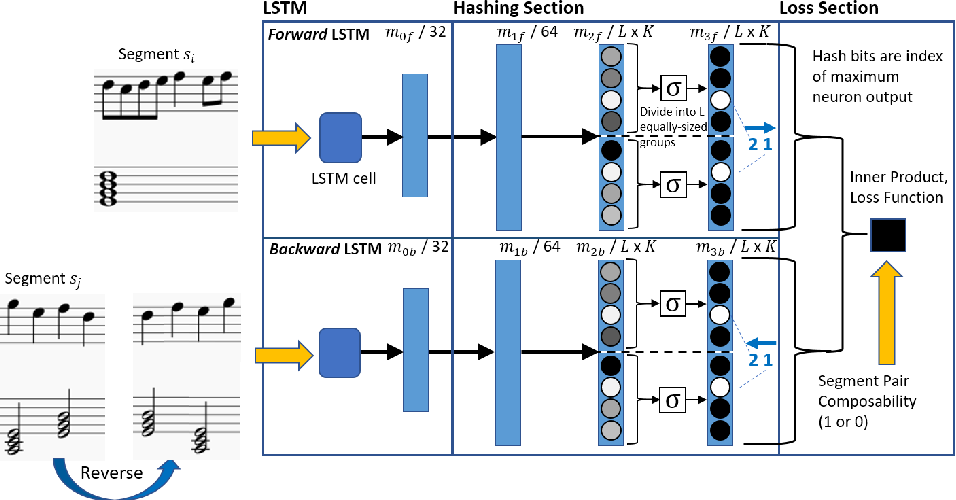 Music generation research has grown in popularity over the past decade, thanks to the deep learning revolution that has redefined the landscape of artificial intelligence. In this paper, we propose a novel approach to music generation inspired by musical segment concatenation methods and hash learning algorithms. Given a segment of music, we use a deep recurrent neural network and ranking-based hash learning to assign a forward hash code to the segment to retrieve candidate segments for continuation with matching backward hash codes. The proposed method is thus called Deep Segment Hash Learning (DSHL). To the best of our knowledge, DSHL is the first end-to-end segment hash learning method for music generation, and the first to use pair-wise training with segments of music. We demonstrate that this method is capable of generating music which is both original and enjoyable, and that DSHL offers a promising new direction for music generation research. 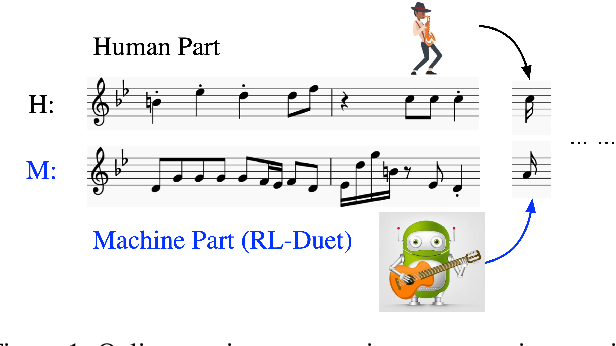 This paper presents a deep reinforcement learning algorithm for online accompaniment generation, with potential for real-time interactive human-machine duet improvisation. Different from offline music generation and harmonization, online music accompaniment requires the algorithm to respond to human input and generate the machine counterpart in a sequential order. We cast this as a reinforcement learning problem, where the generation agent learns a policy to generate a musical note (action) based on previously generated context (state). The key of this algorithm is the well-functioning reward model. Instead of defining it using music composition rules, we learn this model from monophonic and polyphonic training data. This model considers the compatibility of the machine-generated note with both the machine-generated context and the human-generated context. Experiments show that this algorithm is able to respond to the human part and generate a melodic, harmonic and diverse machine part. Subjective evaluations on preferences show that the proposed algorithm generates music pieces of higher quality than the baseline method. 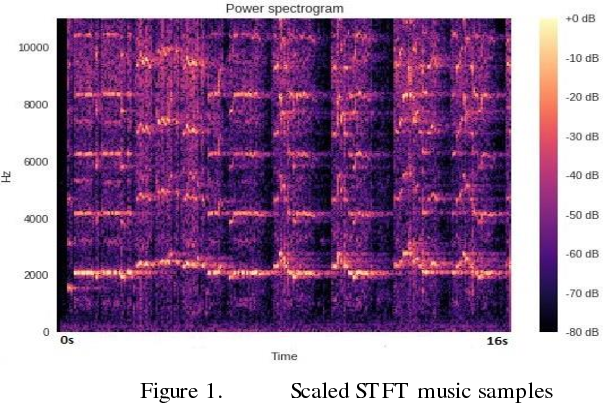 In this paper AlimNet (With respect to great musician, Alim Qasimov) an auxiliary generative adversarial deep neural network (ACGAN) for generating music categorically, is used. This proposed network is a conditional ACGAN to condition the generation process on music tracks which has a hybrid architecture, composing of different kind of layers of neural networks. The employed music dataset is MICM which contains 1137 music samples (506 violins and 631 straw) with seven types of classical music Dastgah labels. To extract both temporal and spectral features, Short-Time Fourier Transform (STFT) is applied to convert input audio signals from time domain to time-frequency domain. GANs are composed of a generator for generating new samples and a discriminator to help generator making better samples. Samples in time-frequency domain are used to train discriminator in fourteen classes (seven Dastgahs and two instruments). The outputs of the conditional ACGAN are also artificial music samples in those mentioned scales in time-frequency domain. Then the output of the generator is transformed by Inverse STFT (ISTFT). Finally, randomly ten generated music samples (five violin and five straw samples) are given to ten musicians to rate how exact the samples are and the overall result was 76.5%.

We propose a novel system that takes as an input body movements of a musician playing a musical instrument and generates music in an unsupervised setting. Learning to generate multi-instrumental music from videos without labeling the instruments is a challenging problem. To achieve the transformation, we built a pipeline named 'Multi-instrumentalistNet' (MI Net). At its base, the pipeline learns a discrete latent representation of various instruments music from log-spectrogram using a Vector Quantized Variational Autoencoder (VQ-VAE) with multi-band residual blocks. The pipeline is then trained along with an autoregressive prior conditioned on the musician's body keypoints movements encoded by a recurrent neural network. Joint training of the prior with the body movements encoder succeeds in the disentanglement of the music into latent features indicating the musical components and the instrumental features. The latent space results in distributions that are clustered into distinct instruments from which new music can be generated. Furthermore, the VQ-VAE architecture supports detailed music generation with additional conditioning. We show that a Midi can further condition the latent space such that the pipeline will generate the exact content of the music being played by the instrument in the video. We evaluate MI Net on two datasets containing videos of 13 instruments and obtain generated music of reasonable audio quality, easily associated with the corresponding instrument, and consistent with the music audio content. 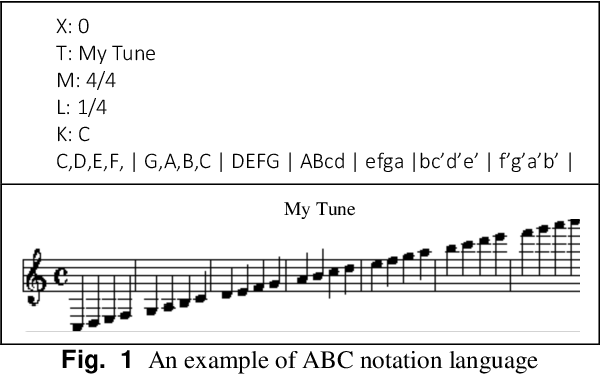 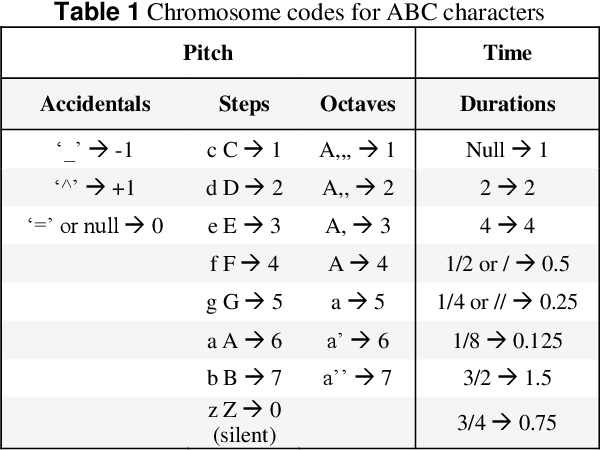 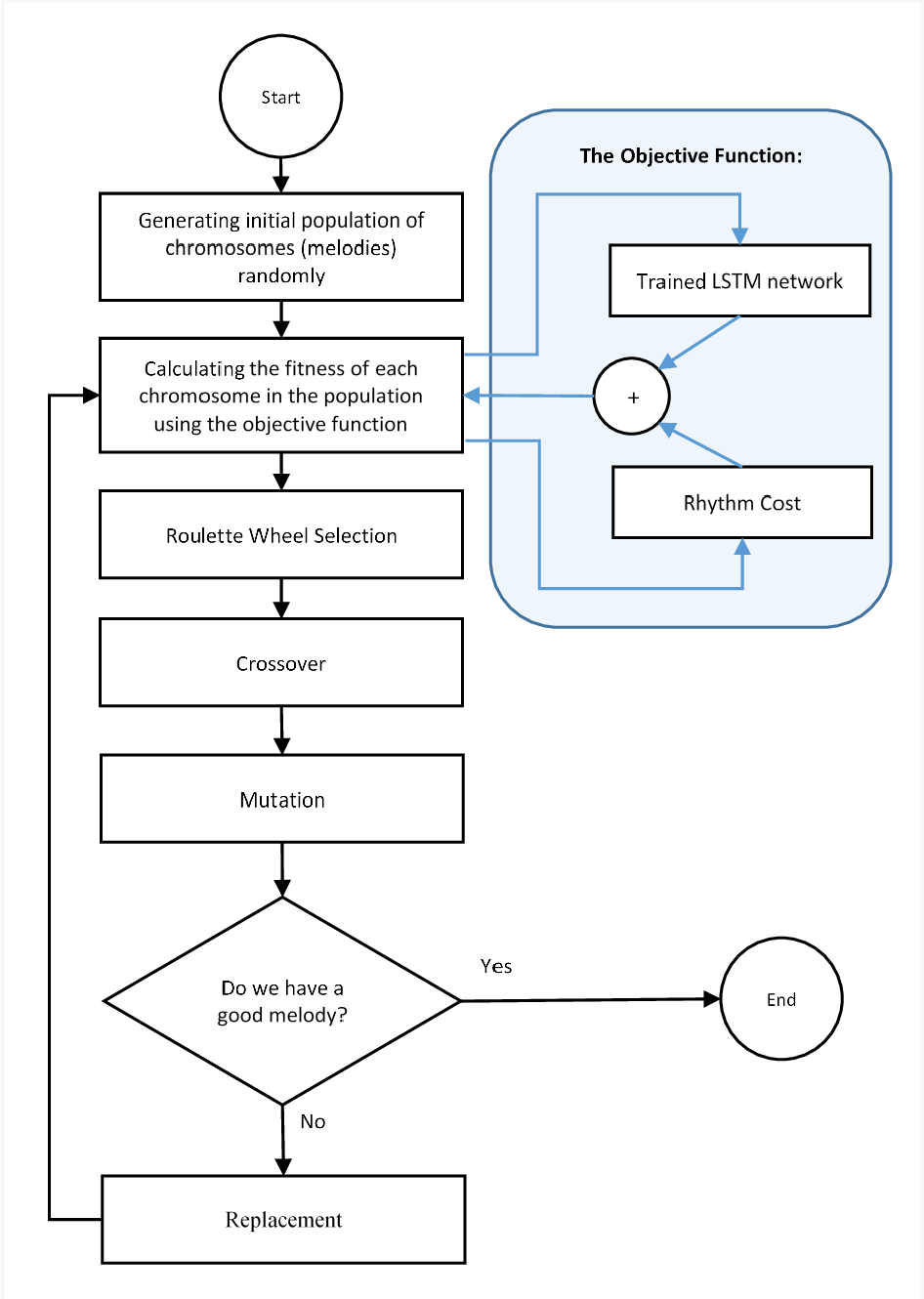 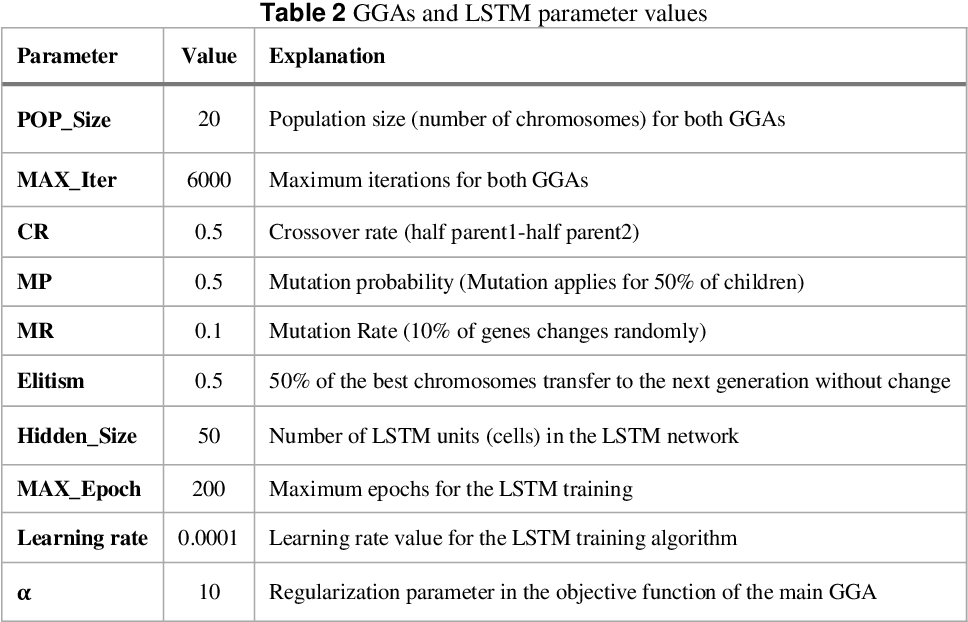 Music Generation (MG) is an interesting research topic that links the art of music and Artificial Intelligence (AI). The goal is to train an artificial composer to generate infinite, fresh, and pleasurable musical pieces. Music has different parts such as melody, harmony, and rhythm. In this paper, we propose a Generative Genetic Algorithm (GGA) to produce a melody automatically. The main GGA uses a Long Short-Term Memory (LSTM) recurrent neural network as the objective function, which should be trained by a spectrum of bad-to-good melodies. These melodies have to be provided by another GGA with a different objective function. Good melodies have been provided by CAMPINs collection. We have considered the rhythm in this work, too. The experimental results clearly show that the proposed GGA method is able to generate eligible melodies with natural transitions and without rhythm error. 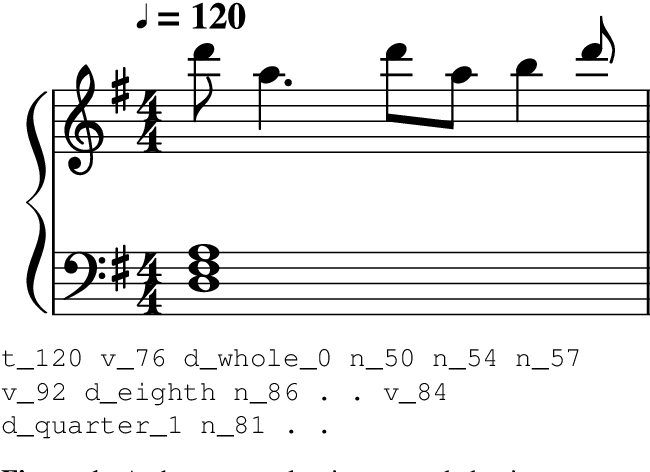 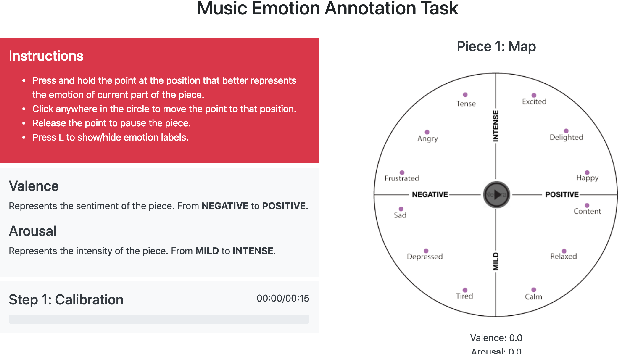 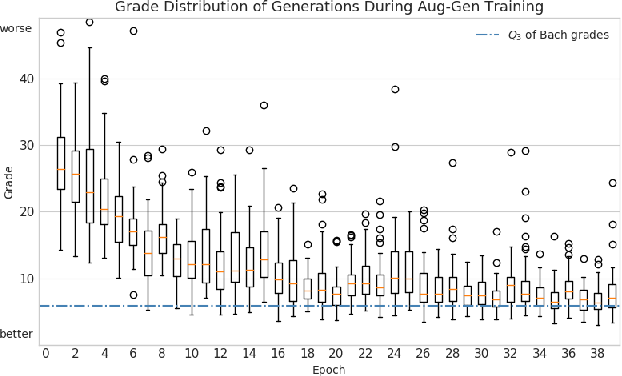 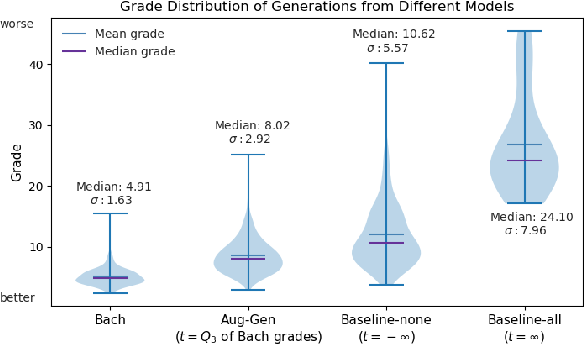