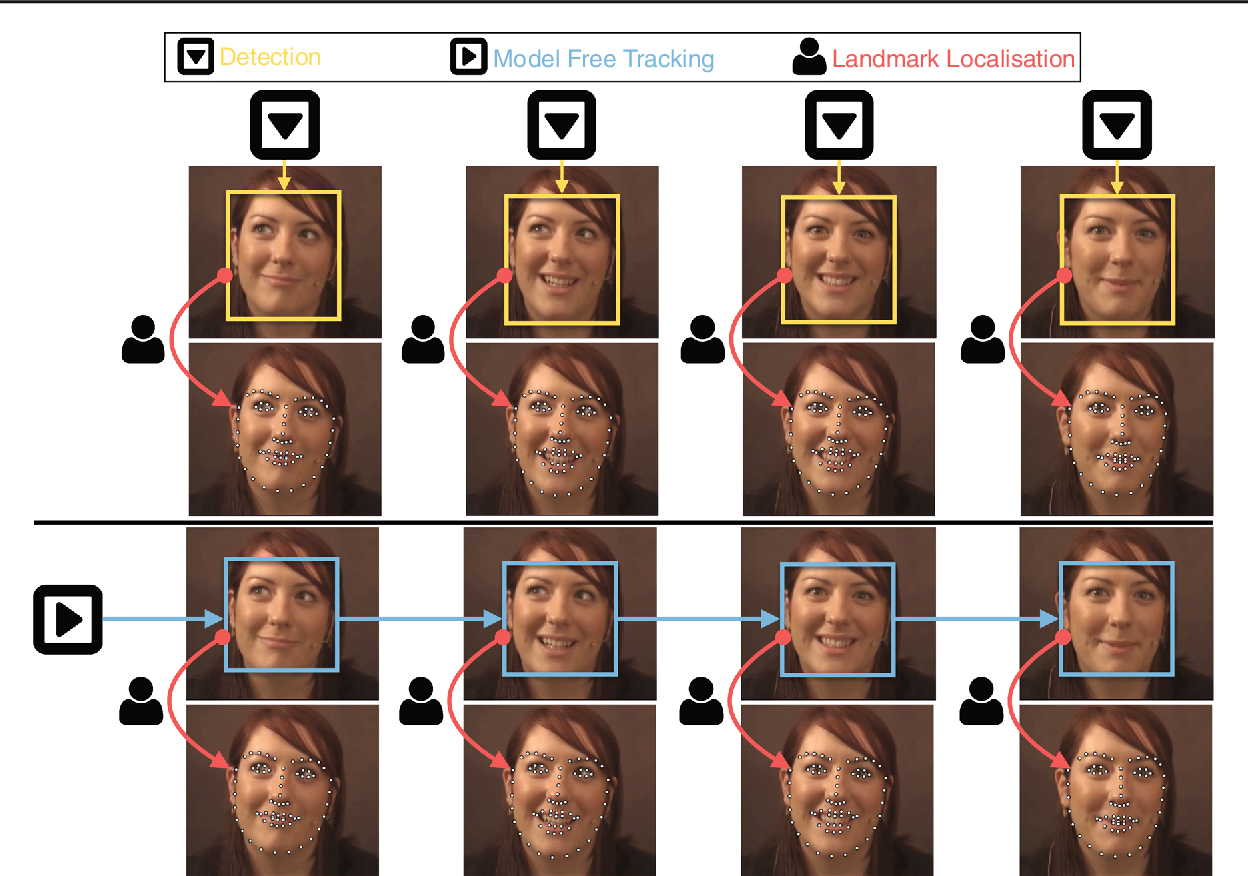 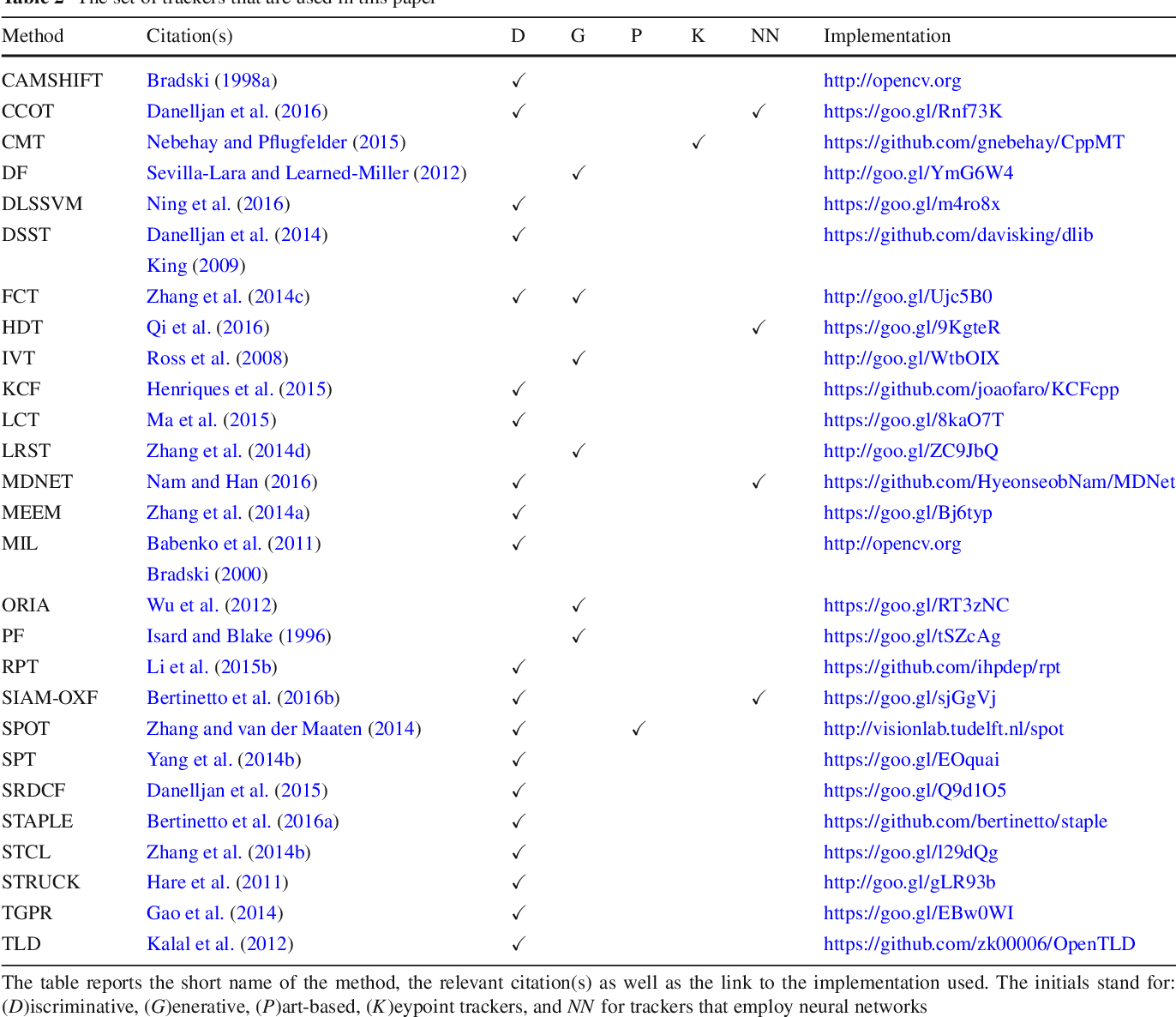 On effective human robot interaction based on recognition and association 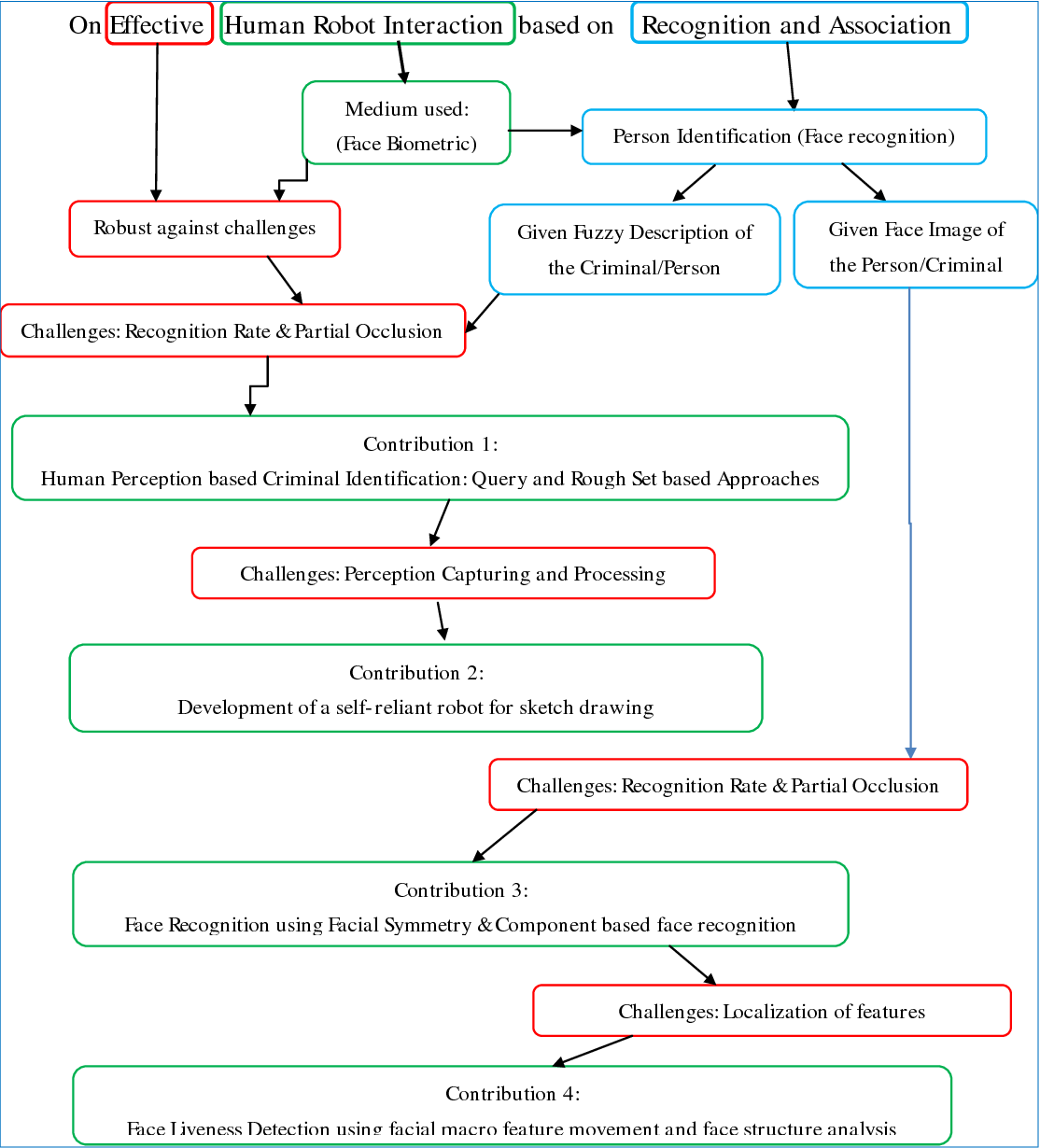 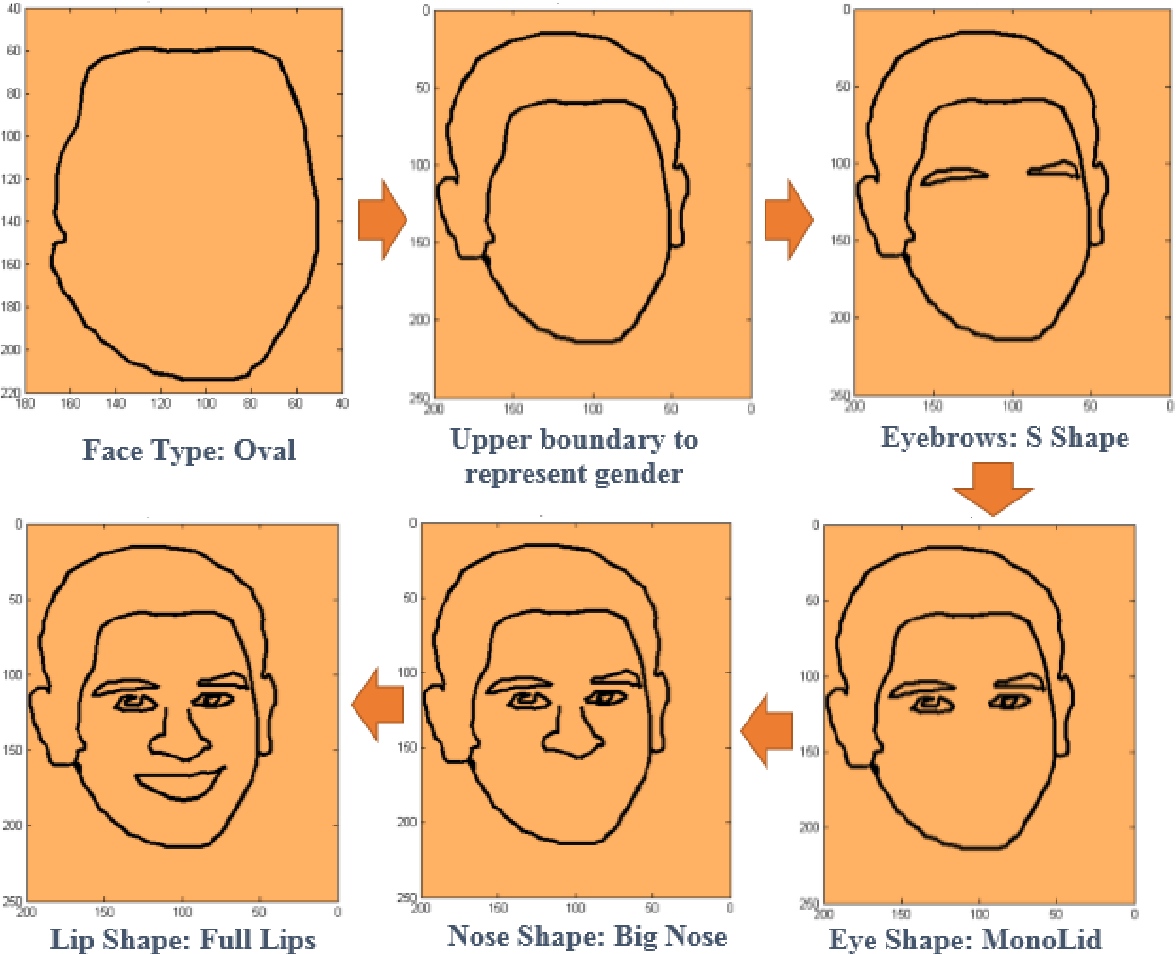 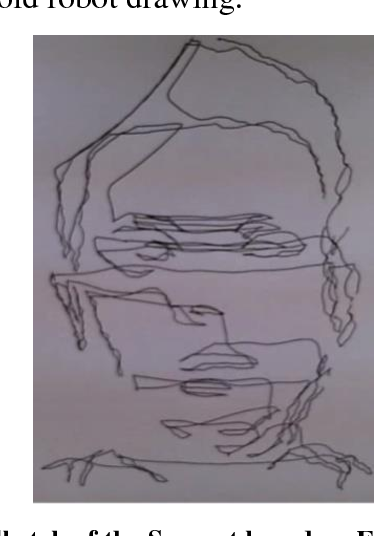 Faces play a magnificent role in human robot interaction, as they do in our daily life. The inherent ability of the human mind facilitates us to recognize a person by exploiting various challenges such as bad illumination, occlusions, pose variation etc. which are involved in face recognition. But it is a very complex task in nature to identify a human face by humanoid robots. The recent literatures on face biometric recognition are extremely rich in its application on structured environment for solving human identification problem. But the application of face biometric on mobile robotics is limited for its inability to produce accurate identification in uneven circumstances. The existing face recognition problem has been tackled with our proposed component based fragmented face recognition framework. The proposed framework uses only a subset of the full face such as eyes, nose and mouth to recognize a person. It's less searching cost, encouraging accuracy and ability to handle various challenges of face recognition offers its applicability on humanoid robots. The second problem in face recognition is the face spoofing, in which a face recognition system is not able to distinguish between a person and an imposter (photo/video of the genuine user). The problem will become more detrimental when robots are used as an authenticator. A depth analysis method has been investigated in our research work to test the liveness of imposters to discriminate them from the legitimate users. The implication of the previous earned techniques has been used with respect to criminal identification with NAO robot. An eyewitness can interact with NAO through a user interface. NAO asks several questions about the suspect, such as age, height, her/his facial shape and size etc., and then making a guess about her/his face. 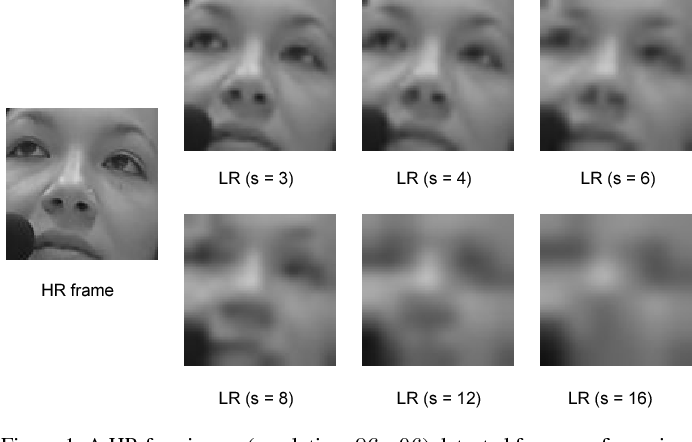 Emotion recognition from facial expressions is tremendously useful, especially when coupled with smart devices and wireless multimedia applications. However, the inadequate network bandwidth often limits the spatial resolution of the transmitted video, which will heavily degrade the recognition reliability. We develop a novel framework to achieve robust emotion recognition from low bit rate video. While video frames are downsampled at the encoder side, the decoder is embedded with a deep network model for joint super-resolution (SR) and recognition. Notably, we propose a novel max-mix training strategy, leading to a single "One-for-All" model that is remarkably robust to a vast range of downsampling factors. That makes our framework well adapted for the varied bandwidths in real transmission scenarios, without hampering scalability or efficiency. The proposed framework is evaluated on the AVEC 2016 benchmark, and demonstrates significantly improved stand-alone recognition performance, as well as rate-distortion (R-D) performance, than either directly recognizing from LR frames, or separating SR and recognition. 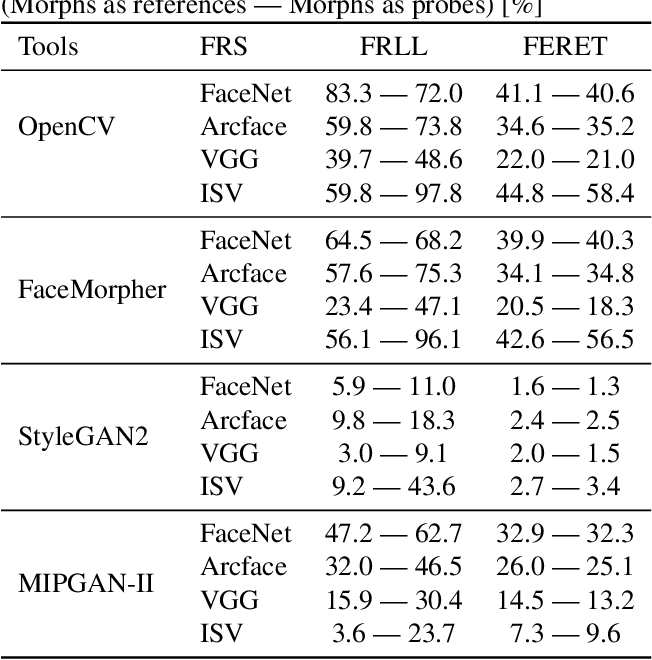 Morphing attacks are a threat to biometric systems where the biometric reference in an identity document can be altered. This form of attack presents an important issue in applications relying on identity documents such as border security or access control. Research in generation of face morphs and their detection is developing rapidly, however very few datasets with morphing attacks and open-source detection toolkits are publicly available. This paper bridges this gap by providing two datasets and the corresponding code for four types of morphing attacks: two that rely on facial landmarks based on OpenCV and FaceMorpher, and two that use StyleGAN 2 to generate synthetic morphs. We also conduct extensive experiments to assess the vulnerability of four state-of-the-art face recognition systems, including FaceNet, VGG-Face, ArcFace, and ISV. Surprisingly, the experiments demonstrate that, although visually more appealing, morphs based on StyleGAN 2 do not pose a significant threat to the state to face recognition systems, as these morphs were outmatched by the simple morphs that are based facial landmarks.

The face mask is an essential sanitaryware in daily lives growing during the pandemic period and is a big threat to current face recognition systems. The masks destroy a lot of details in a large area of face, and it makes it difficult to recognize them even for humans. The evaluation report shows the difficulty well when recognizing masked faces. Rapid development and breakthrough of deep learning in the recent past have witnessed most promising results from face recognition algorithms. But they fail to perform far from satisfactory levels in the unconstrained environment during the challenges such as varying lighting conditions, low resolution, facial expressions, pose variation and occlusions. Facial occlusions are considered one of the most intractable problems. Especially when the occlusion occupies a large region of the face because it destroys lots of official features. 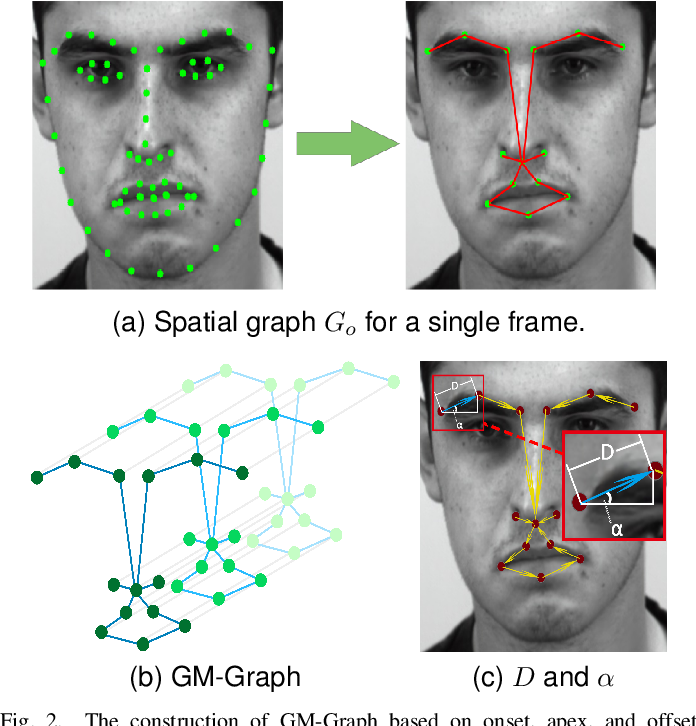 Micro-expression recognition (MER) is valuable because the involuntary nature of micro-expressions (MEs) can reveal genuine emotions. Most works recognize MEs by taking RGB videos or images as input. In fact, the activated facial regions in ME images are very small and the subtle motion can be easily submerged in the unrelated information. Facial landmarks are a low-dimensional and compact modality, which leads to much lower computational cost and can potentially concentrate more on ME-related features. However, the discriminability of landmarks for MER is not clear. Thus, this paper explores the contribution of facial landmarks and constructs a new framework to efficiently recognize MEs with sole facial landmark information. Specially, we design a separate structure module to separately aggregate the spatial and temporal information in the geometric movement graph based on facial landmarks, and a Geometric Two-Stream Graph Network is constructed to aggregate the low-order geometric information and high-order semantic information of facial landmarks. Furthermore, two core components are proposed to enhance features. Specifically, a semantic adjacency matrix can automatically model the relationship between nodes even long-distance nodes in a self-learning fashion; and an Adaptive Action Unit loss is introduced to guide the learning process such that the learned features are forced to have a synchronized pattern with facial action units. Notably, this work tackles MER only utilizing geometric features, processed based on a graph model, which provides a new idea with much higher efficiency to promote MER. The experimental results demonstrate that the proposed method can achieve competitive or even superior performance with a significantly reduced computational cost, and facial landmarks can significantly contribute to MER and are worth further study for efficient ME analysis.

Hey Human, If your Facial Emotions are Uncertain, You Should Use Bayesian Neural Networks! 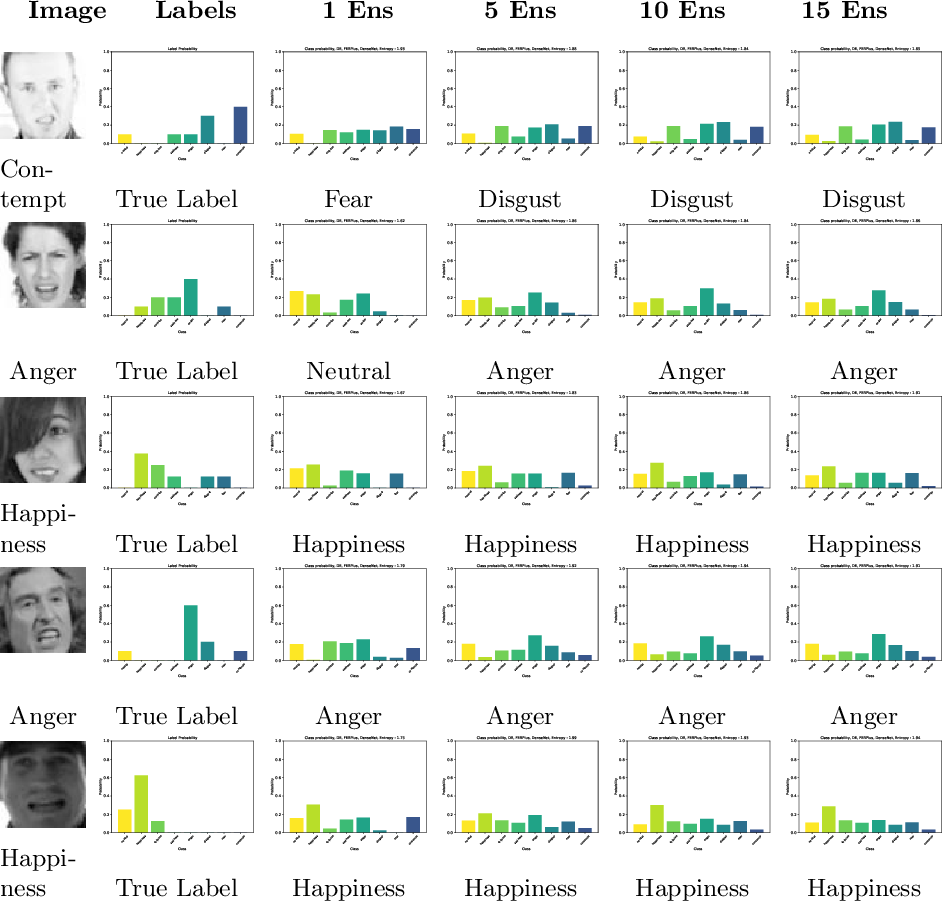 Facial emotion recognition is the task to classify human emotions in face images. It is a difficult task due to high aleatoric uncertainty and visual ambiguity. A large part of the literature aims to show progress by increasing accuracy on this task, but this ignores the inherent uncertainty and ambiguity in the task. In this paper we show that Bayesian Neural Networks, as approximated using MC-Dropout, MC-DropConnect, or an Ensemble, are able to model the aleatoric uncertainty in facial emotion recognition, and produce output probabilities that are closer to what a human expects. We also show that calibration metrics show strange behaviors for this task, due to the multiple classes that can be considered correct, which motivates future work. We believe our work will motivate other researchers to move away from Classical and into Bayesian Neural Networks.

A Driver Fatigue Recognition Algorithm Based on Spatio-Temporal Feature Sequence 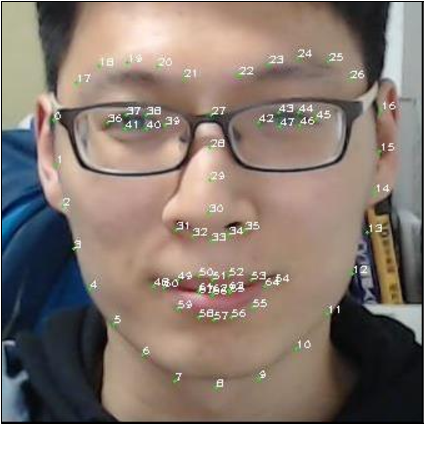 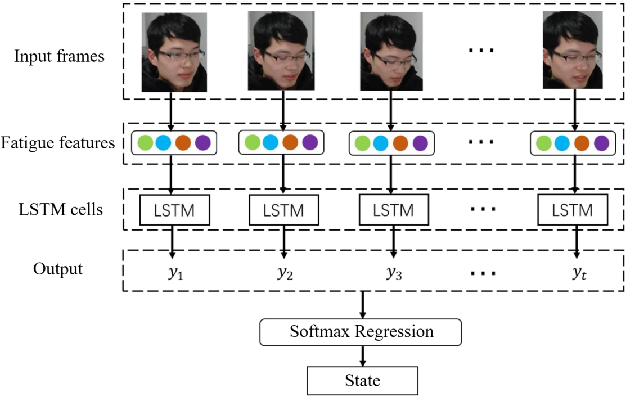 Researches show that fatigue driving is one of the important causes of road traffic accidents, so it is of great significance to study the driver fatigue recognition algorithm to improve road traffic safety. In recent years, with the development of deep learning, the field of pattern recognition has made great development. This paper designs a real-time fatigue state recognition algorithm based on spatio-temporal feature sequence, which can be mainly applied to the scene of fatigue driving recognition. The algorithm is divided into three task networks: face detection network, facial landmark detection and head pose estimation network, fatigue recognition network. Experiments show that the algorithm has the advantages of small volume, high speed and high accuracy. 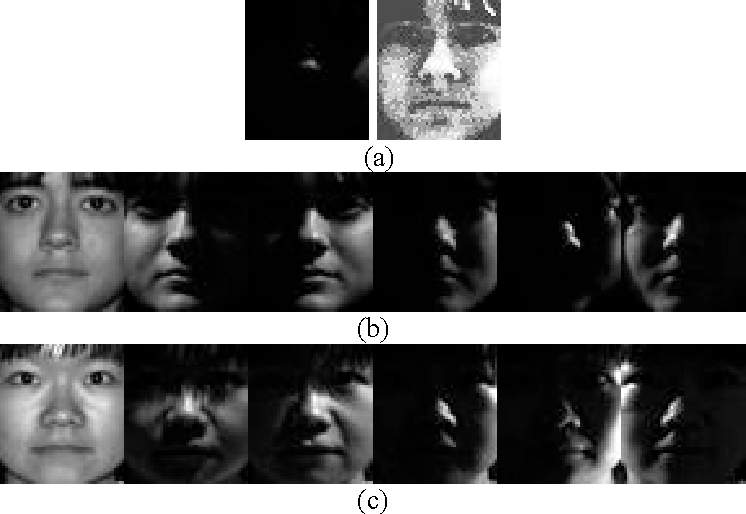 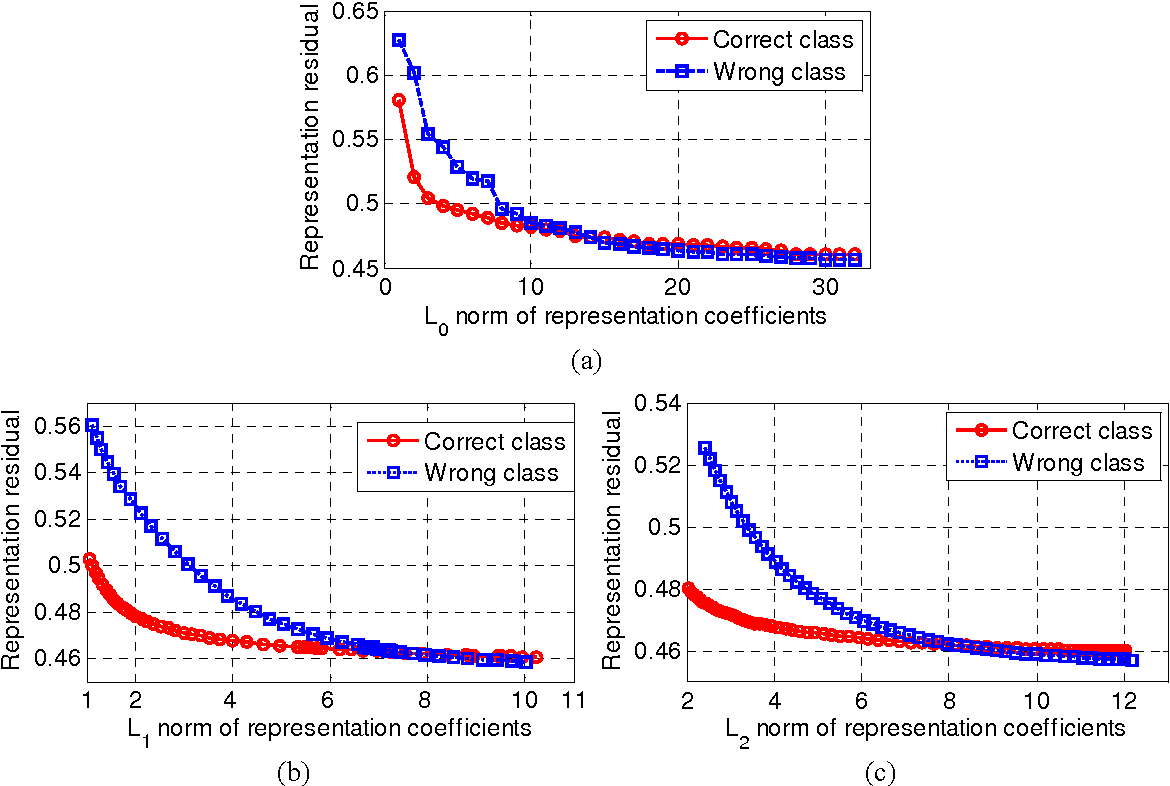 By coding a query sample as a sparse linear combination of all training samples and then classifying it by evaluating which class leads to the minimal coding residual, sparse representation based classification (SRC) leads to interesting results for robust face recognition. It is widely believed that the l1- norm sparsity constraint on coding coefficients plays a key role in the success of SRC, while its use of all training samples to collaboratively represent the query sample is rather ignored. In this paper we discuss how SRC works, and show that the collaborative representation mechanism used in SRC is much more crucial to its success of face classification. The SRC is a special case of collaborative representation based classification (CRC), which has various instantiations by applying different norms to the coding residual and coding coefficient. More specifically, the l1 or l2 norm characterization of coding residual is related to the robustness of CRC to outlier facial pixels, while the l1 or l2 norm characterization of coding coefficient is related to the degree of discrimination of facial features. Extensive experiments were conducted to verify the face recognition accuracy and efficiency of CRC with different instantiations. 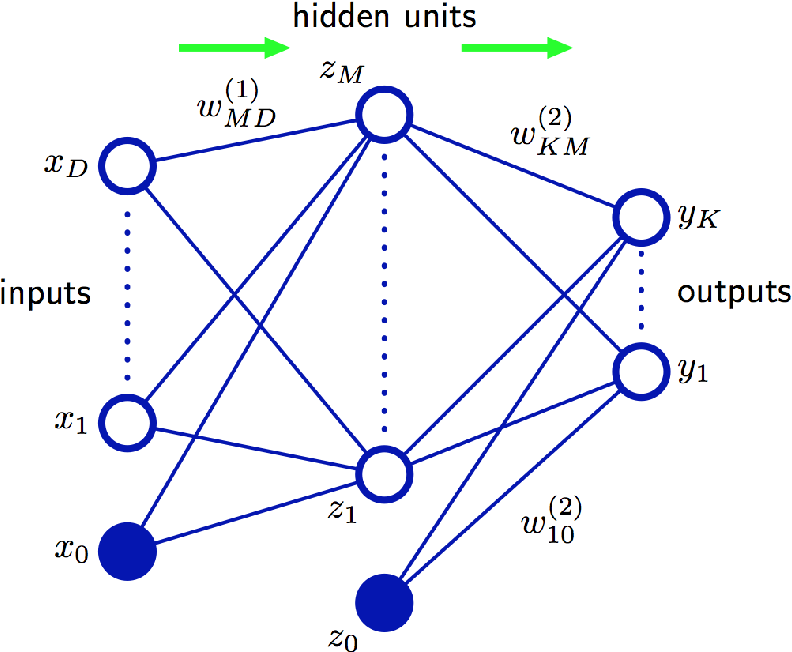 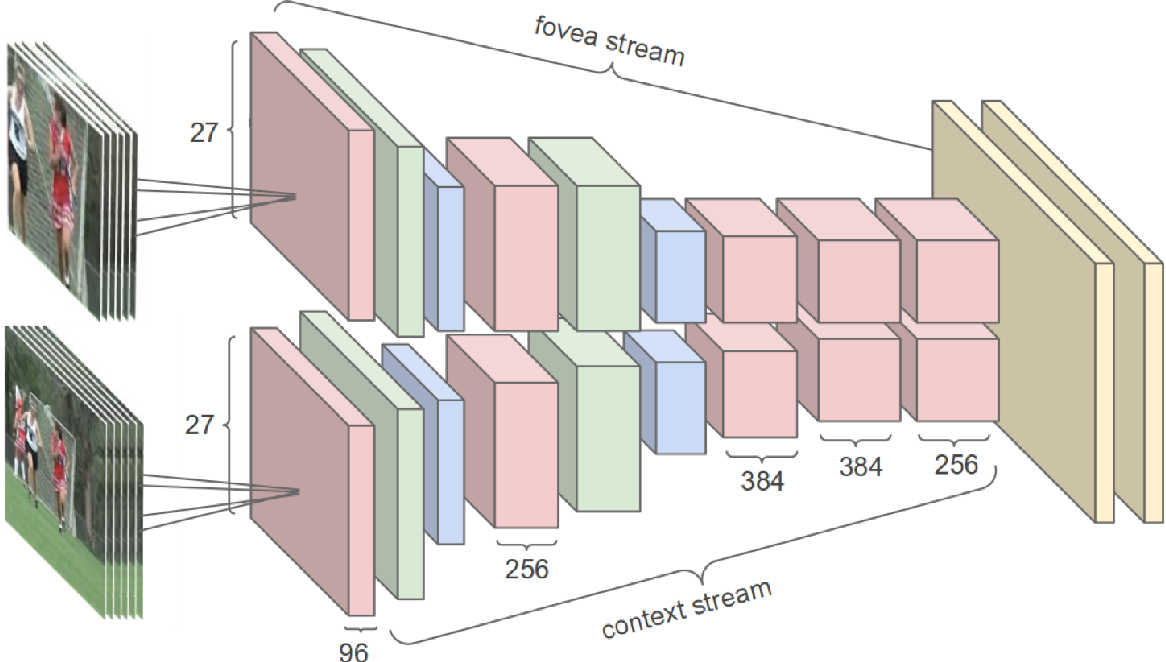 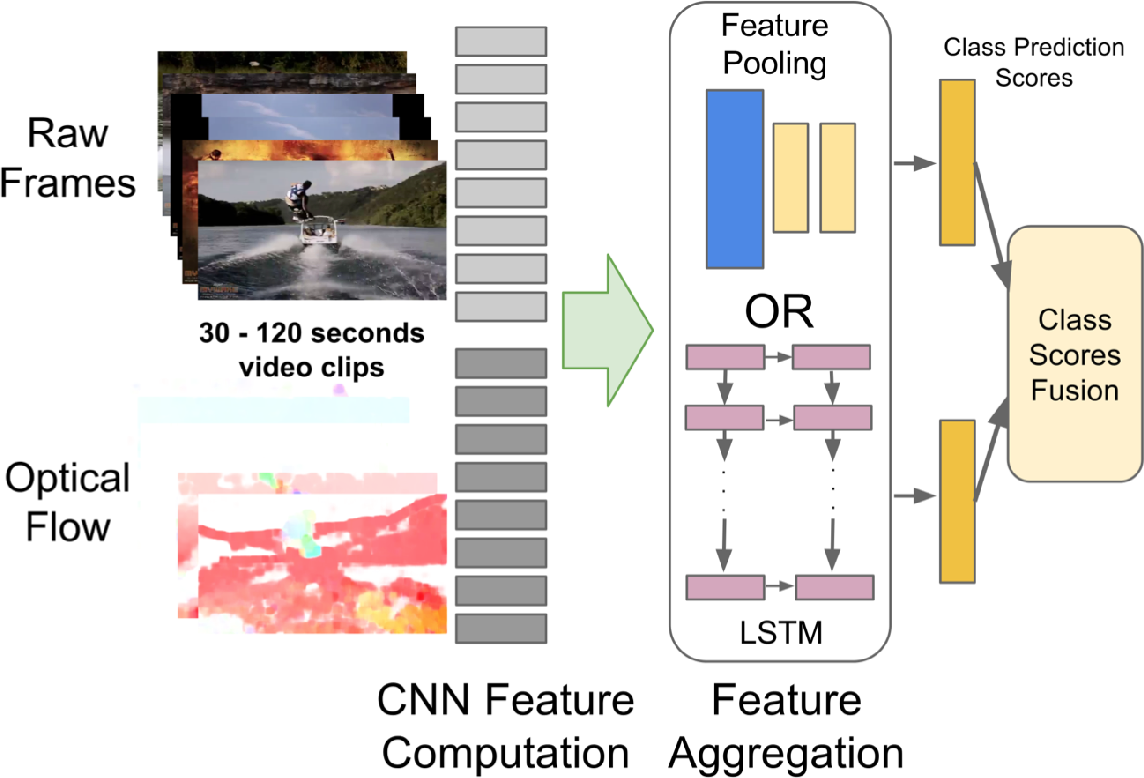 This thesis describes the design and implementation of a smile detector based on deep convolutional neural networks. It starts with a summary of neural networks, the difficulties of training them and new training methods, such as Restricted Boltzmann Machines or autoencoders. It then provides a literature review of convolutional neural networks and recurrent neural networks. In order to select databases for smile recognition, comprehensive statistics of databases popular in the field of facial expression recognition were generated and are summarized in this thesis. It then proposes a model for smile detection, of which the main part is implemented. The experimental results are discussed in this thesis and justified based on a comprehensive model selection performed. All experiments were run on a Tesla K40c GPU benefiting from a speedup of up to factor 10 over the computations on a CPU. A smile detection test accuracy of 99.45% is achieved for the Denver Intensity of Spontaneous Facial Action (DISFA) database, significantly outperforming existing approaches with accuracies ranging from 65.55% to 79.67%. This experiment is re-run under various variations, such as retaining less neutral images or only the low or high intensities, of which the results are extensively compared.