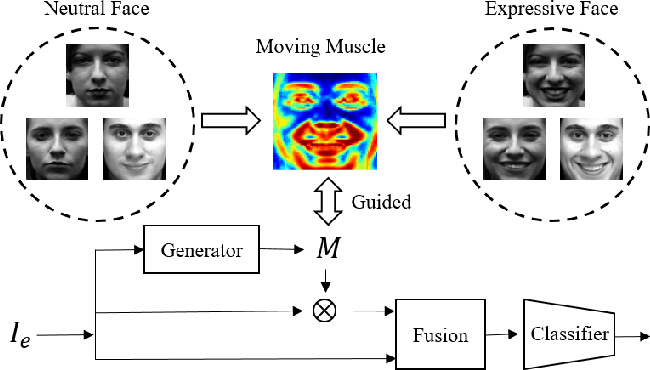 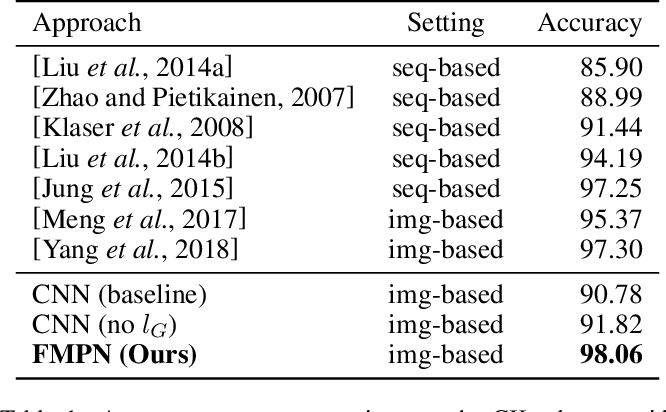 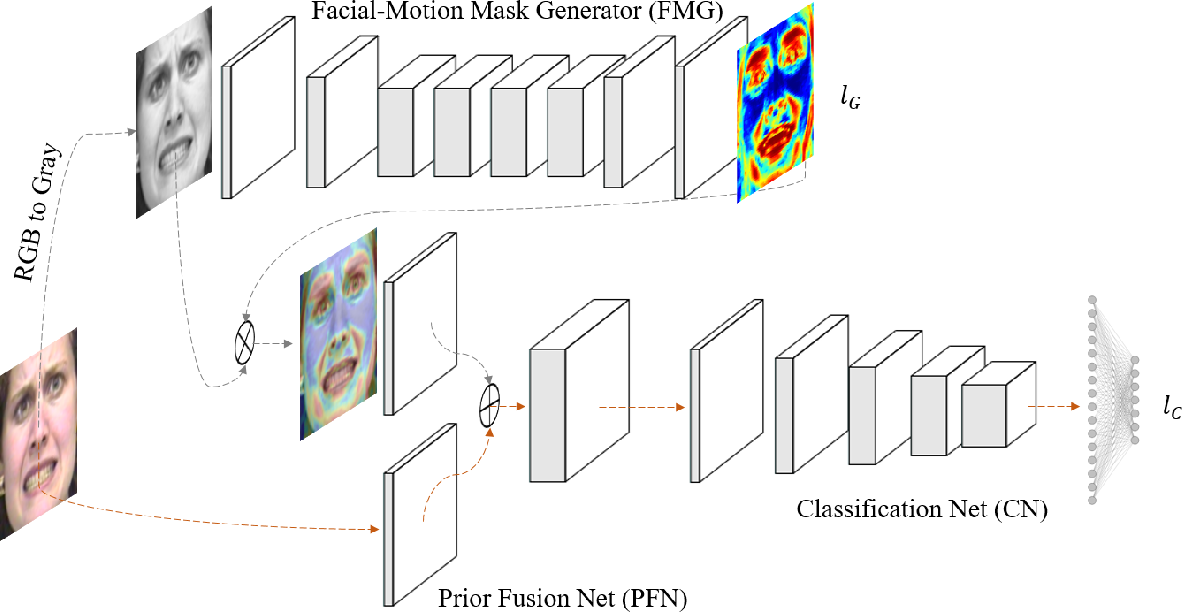 Deep learning based facial expression recognition (FER) has received a lot of attention in the past few years. Most of the existing deep learning based FER methods do not consider domain knowledge well, which thereby fail to extract representative features. In this work, we propose a novel FER framework, named Facial Motion Prior Networks (FMPN). Particularly, we introduce an addition branch to generate a facial mask so as to focus on facial muscle moving regions. To guide the facial mask learning, we propose to incorporate prior domain knowledge by using the average differences between neutral faces and the corresponding expressive faces as the guidance. Extensive experiments on four facial expression benchmark datasets demonstrate the effectiveness of the proposed method, compared with the state-of-the-art approaches.

Today's proliferation of powerful facial recognition models poses a real threat to personal privacy. As Clearview.ai demonstrated, anyone can canvas the Internet for data, and train highly accurate facial recognition models of us without our knowledge. We need tools to protect ourselves from unauthorized facial recognition systems and their numerous potential misuses. Unfortunately, work in related areas are limited in practicality and effectiveness. In this paper, we propose Fawkes, a system that allow individuals to inoculate themselves against unauthorized facial recognition models. Fawkes achieves this by helping users adding imperceptible pixel-level changes (we call them "cloaks") to their own photos before publishing them online. When collected by a third-party "tracker" and used to train facial recognition models, these "cloaked" images produce functional models that consistently misidentify the user. We experimentally prove that Fawkes provides 95+% protection against user recognition regardless of how trackers train their models. Even when clean, uncloaked images are "leaked" to the tracker and used for training, Fawkes can still maintain a 80+% protection success rate. In fact, we perform real experiments against today's state-of-the-art facial recognition services and achieve 100% success. Finally, we show that Fawkes is robust against a variety of countermeasures that try to detect or disrupt cloaks. 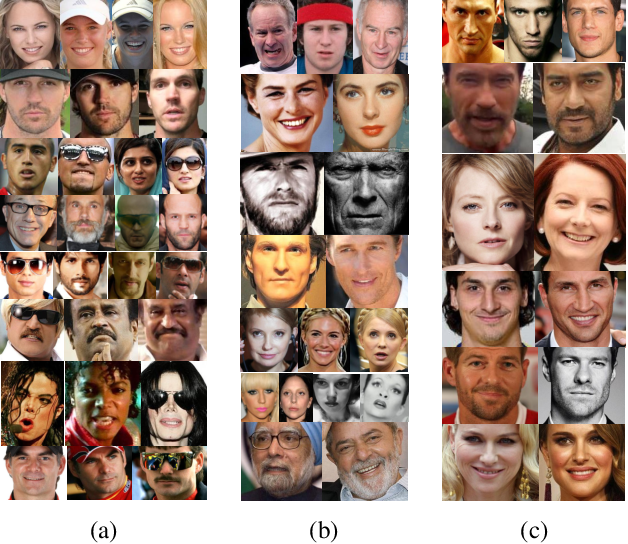 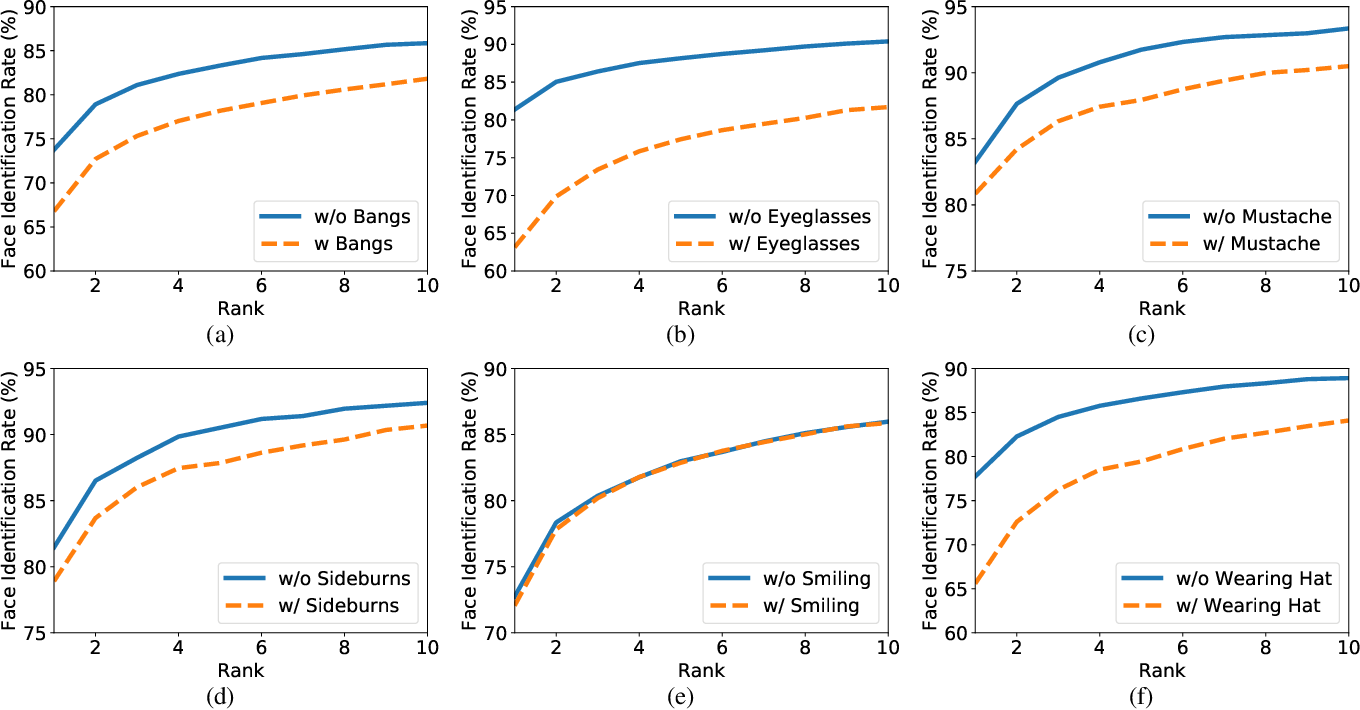 In this paper, we address a key limitation of existing 2D face recognition methods: robustness to occlusions. To accomplish this task, we systematically analyzed the impact of facial attributes on the performance of a state-of-the-art face recognition method and through extensive experimentation, quantitatively analyzed the performance degradation under different types of occlusion. Our proposed Occlusion-aware face REcOgnition (OREO) approach learned discriminative facial templates despite the presence of such occlusions. First, an attention mechanism was proposed that extracted local identity-related region. The local features were then aggregated with the global representations to form a single template. Second, a simple, yet effective, training strategy was introduced to balance the non-occluded and occluded facial images. Extensive experiments demonstrated that OREO improved the generalization ability of face recognition under occlusions by (10.17%) in a single-image-based setting and outperformed the baseline by approximately (2%) in terms of rank-1 accuracy in an image-set-based scenario.

Facial expressions are an integral part of human cognition and communication, and can be applied in various real life applications. A vital precursor to accurate expression recognition is feature extraction. In this paper, we propose SenTion: A framework for sensing facial expressions. We propose a novel person independent and scale invariant method of extracting Inter Vector Angles (IVA) as geometric features, which proves to be robust and reliable across databases. SenTion employs a novel framework of combining geometric (IVA's) and appearance based features (Histogram of Gradients) to create a hybrid model, that achieves state of the art recognition accuracy. We evaluate the performance of SenTion on two famous face expression data set, namely: CK+ and JAFFE; and subsequently evaluate the viability of facial expression systems by a user study. Extensive experiments showed that SenTion framework yielded dramatic improvements in facial expression recognition and could be employed in real-world applications with low resolution imaging and minimal computational resources in real-time, achieving 15-18 fps on a 2.4 GHz CPU with no GPU. 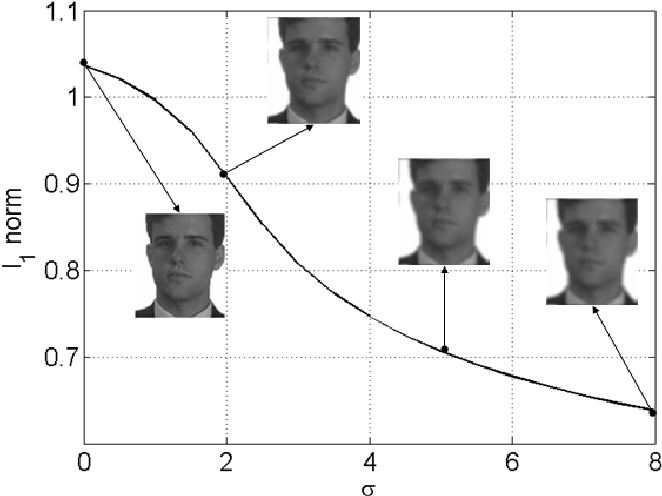 Blur in facial images significantly impedes the efficiency of recognition approaches. However, most existing blind deconvolution methods cannot generate satisfactory results due to their dependence on strong edges, which are sufficient in natural images but not in facial images. In this paper, we represent point spread functions (PSFs) by the linear combination of a set of pre-defined orthogonal PSFs, and similarly, an estimated intrinsic (EI) sharp face image is represented by the linear combination of a set of pre-defined orthogonal face images. In doing so, PSF and EI estimation is simplified to discovering two sets of linear combination coefficients, which are simultaneously found by our proposed coupled learning algorithm. To make our method robust to different types of blurry face images, we generate several candidate PSFs and EIs for a test image, and then, a non-blind deconvolution method is adopted to generate more EIs by those candidate PSFs. Finally, we deploy a blind image quality assessment metric to automatically select the optimal EI. Thorough experiments on the facial recognition technology database, extended Yale face database B, CMU pose, illumination, and expression (PIE) database, and face recognition grand challenge database version 2.0 demonstrate that the proposed approach effectively restores intrinsic sharp face images and, consequently, improves the performance of face recognition. 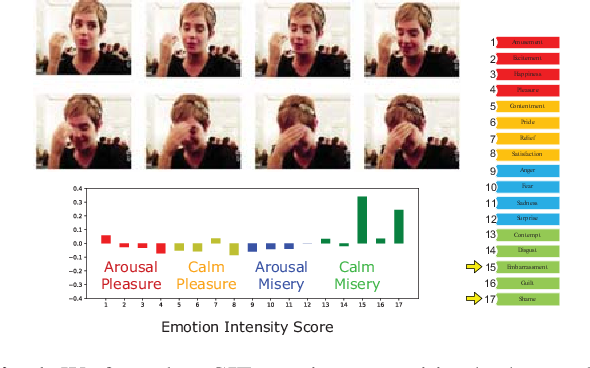 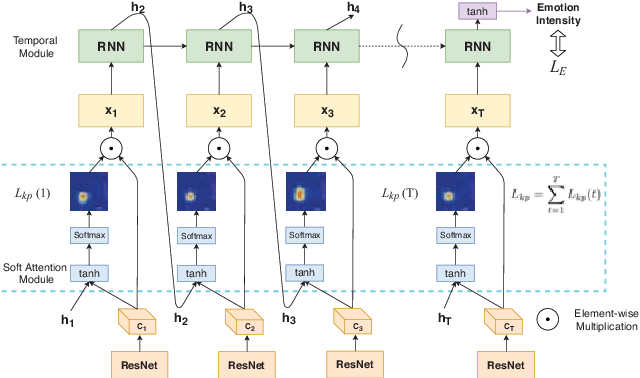 As an intuitive way of expression emotion, the animated Graphical Interchange Format (GIF) images have been widely used on social media. Most previous studies on automated GIF emotion recognition fail to effectively utilize GIF's unique properties, and this potentially limits the recognition performance. In this study, we demonstrate the importance of human related information in GIFs and conduct human-centered GIF emotion recognition with a proposed Keypoint Attended Visual Attention Network (KAVAN). The framework consists of a facial attention module and a hierarchical segment temporal module. The facial attention module exploits the strong relationship between GIF contents and human characters, and extracts frame-level visual feature with a focus on human faces. The Hierarchical Segment LSTM (HS-LSTM) module is then proposed to better learn global GIF representations. Our proposed framework outperforms the state-of-the-art on the MIT GIFGIF dataset. Furthermore, the facial attention module provides reliable facial region mask predictions, which improves the model's interpretability.


* Accepted to IEEE International Conference on Multimedia and Expo (ICME) 2019 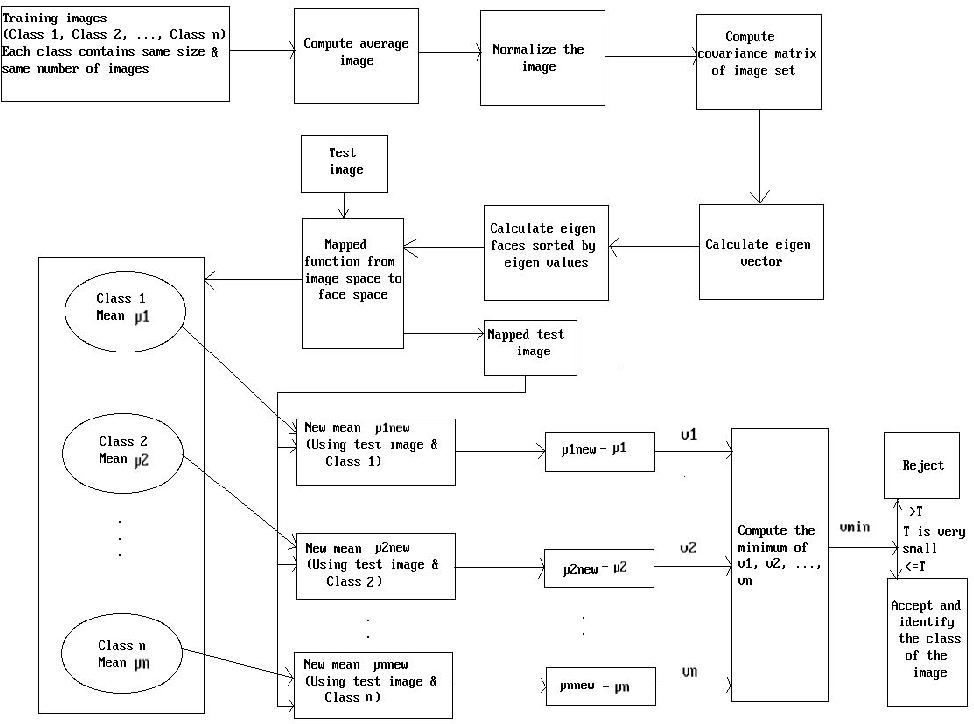 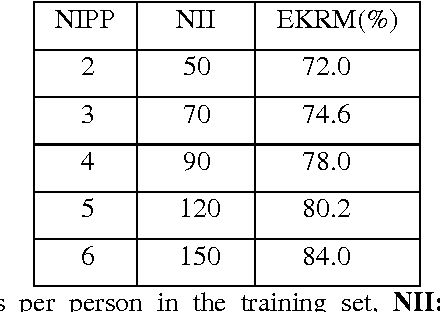 Facial expressions convey non-verbal cues, which play an important role in interpersonal relations. Automatic recognition of human face based on facial expression can be an important component of natural human-machine interface. It may also be used in behavioural science. Although human can recognize the face practically without any effort, but reliable face recognition by machine is a challenge. This paper presents a new approach for recognizing the face of a person considering the expressions of the same human face at different instances of time. This methodology is developed combining Eigenface method for feature extraction and modified k-Means clustering for identification of the human face. This method endowed the face recognition without using the conventional distance measure classifiers. Simulation results show that proposed face recognition using perception of k-Means clustering is useful for face images with different facial expressions. 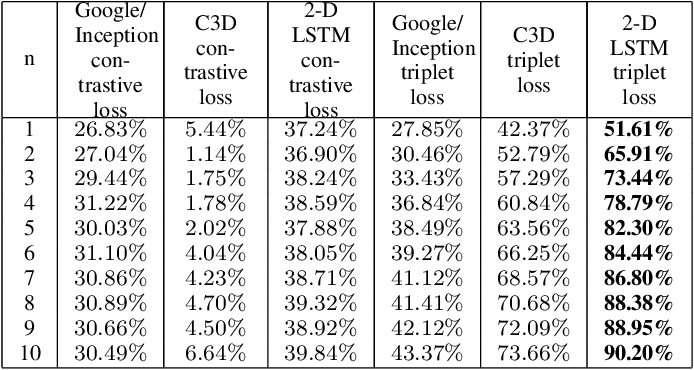 This paper tackles face recognition in videos employing metric learning methods and similarity ranking models. The paper compares the use of the Siamese network with contrastive loss and Triplet Network with triplet loss implementing the following architectures: Google/Inception architecture, 3D Convolutional Network (C3D), and a 2-D Long short-term memory (LSTM) Recurrent Neural Network. We make use of still images and sequences from videos for training the networks and compare the performances implementing the above architectures. The dataset used was the YouTube Face Database designed for investigating the problem of face recognition in videos. The contribution of this paper is two-fold: to begin, the experiments have established 3-D Convolutional networks and 2-D LSTMs with the contrastive loss on image sequences do not outperform Google/Inception architecture with contrastive loss in top $n$ rank face retrievals with still images. However, the 3-D Convolution networks and 2-D LSTM with triplet Loss outperform the Google/Inception with triplet loss in top $n$ rank face retrievals on the dataset; second, a Support Vector Machine (SVM) was used in conjunction with the CNNs' learned feature representations for facial identification. The results show that feature representation learned with triplet loss is significantly better for n-shot facial identification compared to contrastive loss. The most useful feature representations for facial identification are from the 2-D LSTM with triplet loss. The experiments show that learning spatio-temporal features from video sequences is beneficial for facial recognition in videos.


* Paper was accepted into Fusion 2020 conference but will only be published after the virtual conference in July 2020. 7 pages long 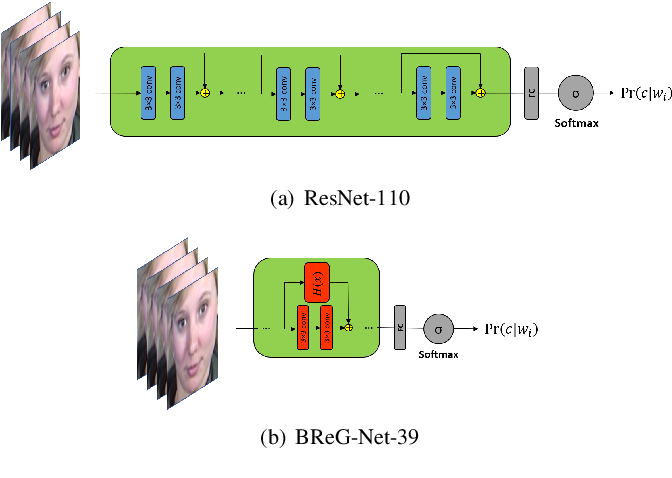 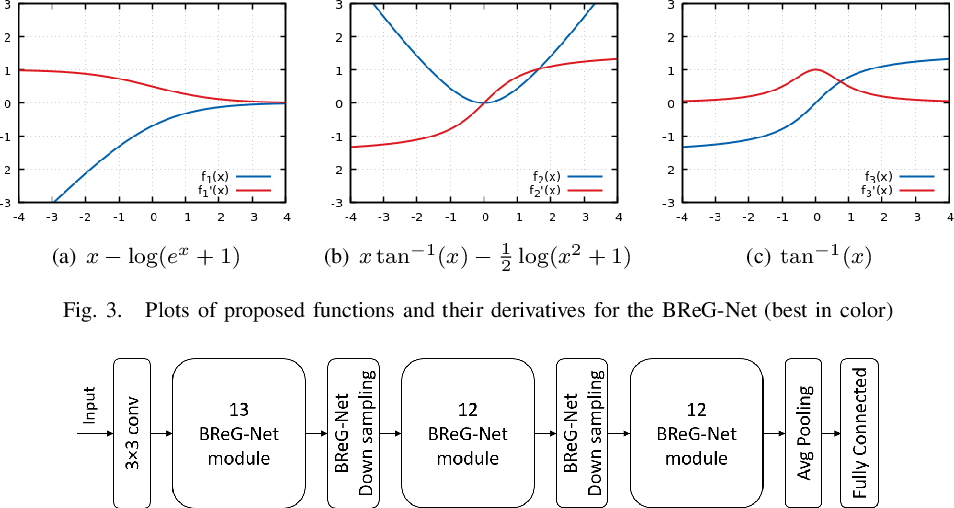 Residual-based neural networks have shown remarkable results in various visual recognition tasks including Facial Expression Recognition (FER). Despite the tremendous efforts have been made to improve the performance of FER systems using DNNs, existing methods are not generalizable enough for practical applications. This paper introduces Bounded Residual Gradient Networks (BReG-Net) for facial expression recognition, in which the shortcut connection between the input and the output of the ResNet module is replaced with a differentiable function with a bounded gradient. This configuration prevents the network from facing the vanishing or exploding gradient problem. We show that utilizing such non-linear units will result in shallower networks with better performance. Further, by using a weighted loss function which gives a higher priority to less represented categories, we can achieve an overall better recognition rate. The results of our experiments show that BReG-Nets outperform state-of-the-art methods on three publicly available facial databases in the wild, on both the categorical and dimensional models of affect. 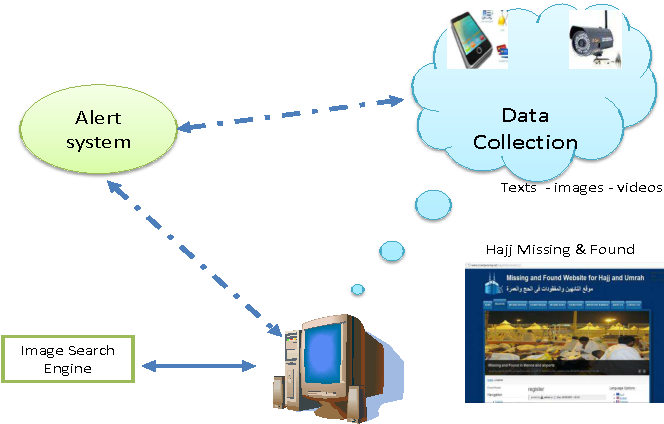 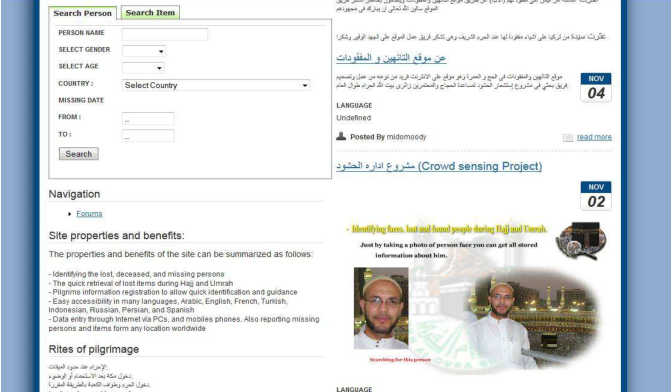 In this paper, a system for facial recognition to identify missing and found people in Hajj and Umrah is described as a web portal. Explicitly, we present a novel algorithm for recognition and classifications of facial images based on applying 2DPCA to a 2D representation of the Histogram of oriented gradients (2D-HOG) which maintains the spatial relation between pixels of the input images. This algorithm allows a compact representation of the images which reduces the computational complexity and the storage requirments, while maintaining the highest reported recognition accuracy. This promotes this method for usage with very large datasets. Large dataset was collected for people in Hajj. Experimental results employing ORL, UMIST, JAFFE, and HAJJ datasets confirm these excellent properties.