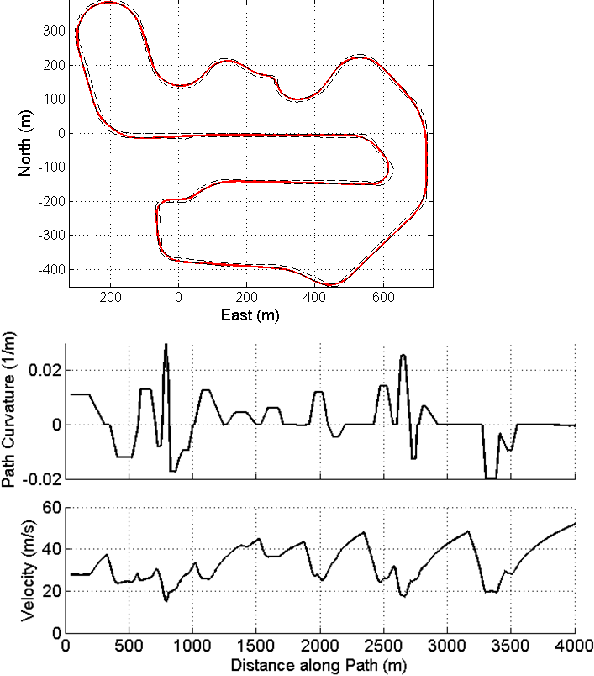 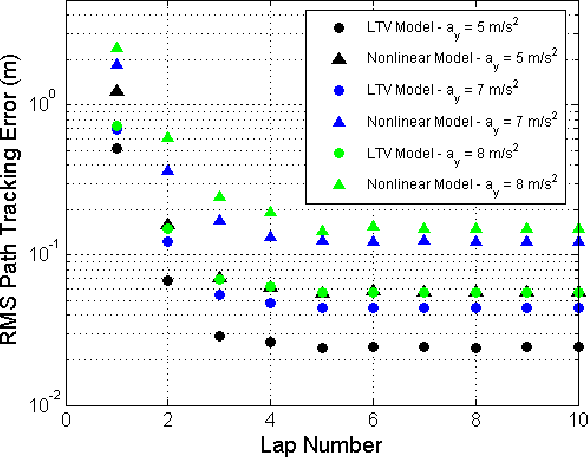 Iterative learning control has been successfully used for several decades to improve the performance of control systems that perform a single repeated task. Using information from prior control executions, learning controllers gradually determine open-loop control inputs whose reference tracking performance can exceed that of traditional feedback-feedforward control algorithms. This paper considers iterative learning control for a previously unexplored field: autonomous racing. Racecars are driven multiple laps around the same sequence of turns while operating near the physical limits of tire-road friction, where steering dynamics become highly nonlinear and transient, making accurate path tracking difficult. However, because the vehicle trajectory is identical for each lap in the case of single-car racing, the nonlinear vehicle dynamics and unmodelled road conditions are repeatable and can be accounted for using iterative learning control, provided the tire force limits have not been exceeded. This paper describes the design and application of proportional-derivative (PD) and quadratically optimal (Q-ILC) learning algorithms for multiple-lap path tracking of an autonomous race vehicle. Simulation results are used to tune controller gains and test convergence, and experimental results are presented on an Audi TTS race vehicle driving several laps around Thunderhill Raceway in Willows, CA at lateral accelerations of up to 8 $\mathrm{m/s^2}$. Both control algorithms are able to correct transient path tracking errors and improve the performance provided by a reference feedforward controller. 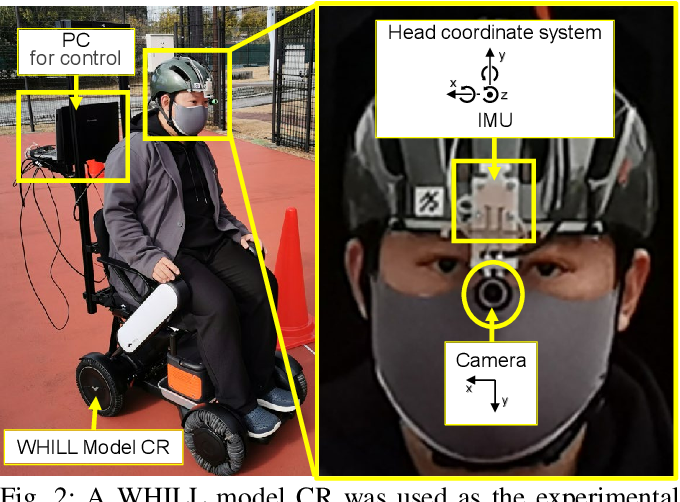 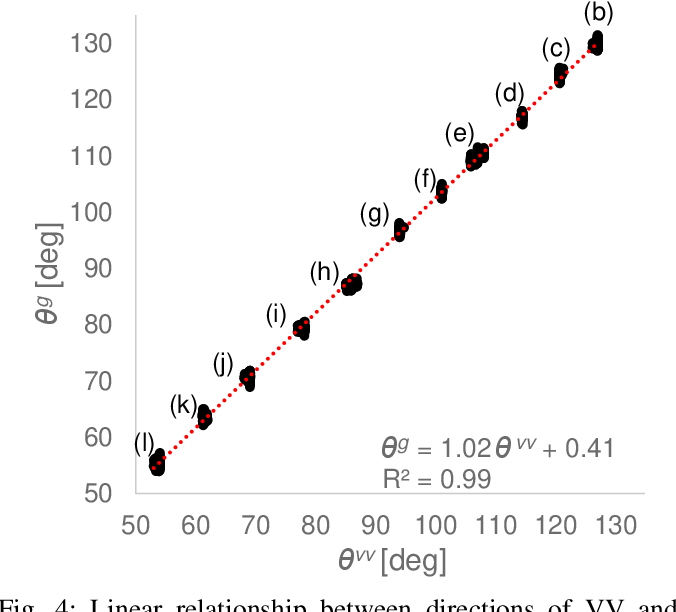 Passengers (drivers) of level 3-5 autonomous personal mobility vehicles (APMV) and cars can perform non-driving tasks, such as reading books and smartphones, while driving. It has been pointed out that such activities may increase motion sickness. Many studies have been conducted to build countermeasures, of which various computational motion sickness models have been developed. Many of these are based on subjective vertical conflict (SVC) theory, which describes vertical changes in direction sensed by human sensory organs vs. those expected by the central nervous system. Such models are expected to be applied to autonomous driving scenarios. However, no current computational model can integrate visual vertical information with vestibular sensations. We proposed a 6 DoF SVC-VV model which add a visually perceived vertical block into a conventional six-degrees-of-freedom SVC model to predict VV directions from image data simulating the visual input of a human. Hence, a simple image-based VV estimation method is proposed. As the validation of the proposed model, this paper focuses on describing the fact that the motion sickness increases as a passenger reads a book while using an AMPV, assuming that visual vertical (VV) plays an important role. In the static experiment, it is demonstrated that the estimated VV by the proposed method accurately described the gravitational acceleration direction with a low mean absolute deviation. In addition, the results of the driving experiment using an APMV demonstrated that the proposed 6 DoF SVC-VV model could describe that the increased motion sickness experienced when the VV and gravitational acceleration directions were different. 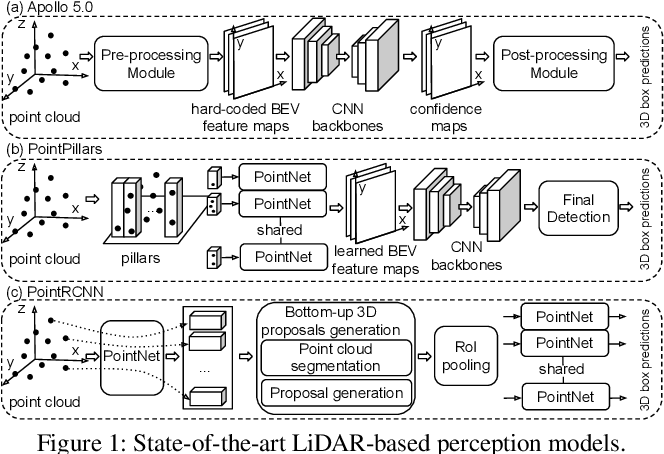 Perception plays a pivotal role in autonomous driving systems, which utilizes onboard sensors like cameras and LiDARs (Light Detection and Ranging) to assess surroundings. Recent studies have demonstrated that LiDAR-based perception is vulnerable to spoofing attacks, in which adversaries spoof a fake vehicle in front of a victim self-driving car by strategically transmitting laser signals to the victim's LiDAR sensor. However, existing attacks suffer from effectiveness and generality limitations. In this work, we perform the first study to explore the general vulnerability of current LiDAR-based perception architectures and discover that the ignored occlusion patterns in LiDAR point clouds make self-driving cars vulnerable to spoofing attacks. We construct the first black-box spoofing attack based on our identified vulnerability, which universally achieves around 80% mean success rates on all target models. We perform the first defense study, proposing CARLO to mitigate LiDAR spoofing attacks. CARLO detects spoofed data by treating ignored occlusion patterns as invariant physical features, which reduces the mean attack success rate to 5.5%. Meanwhile, we take the first step towards exploring a general architecture for robust LiDAR-based perception, and propose SVF that embeds the neglected physical features into end-to-end learning. SVF further reduces the mean attack success rate to around 2.3%.

Machine Biometrics -- Towards Identifying Machines in a Smart City Environment 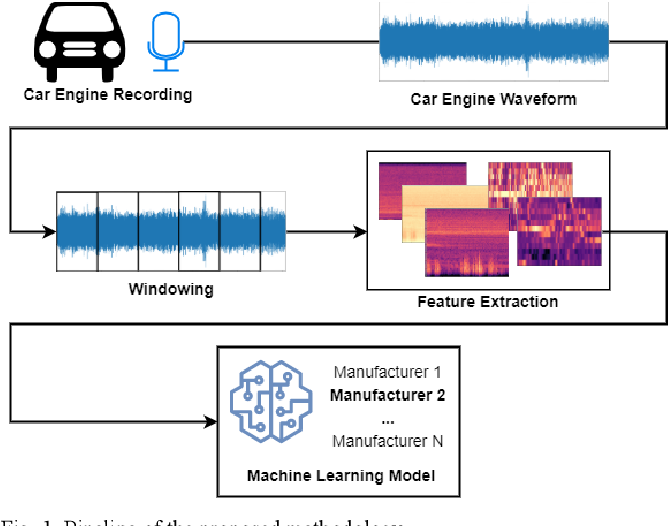 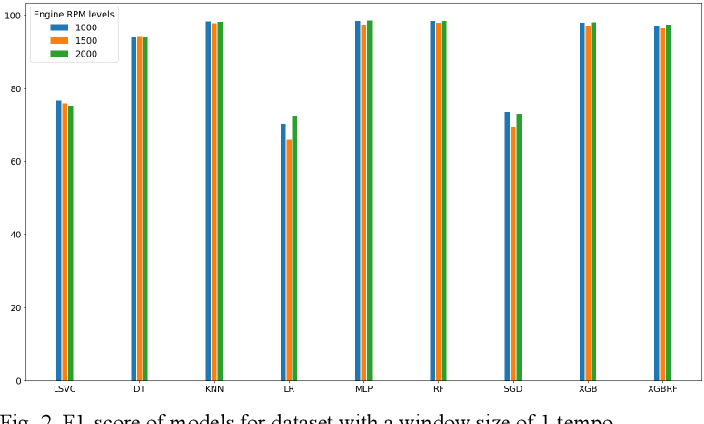 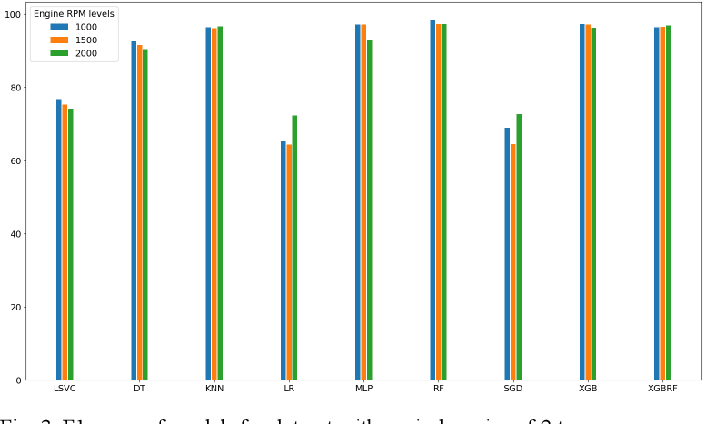 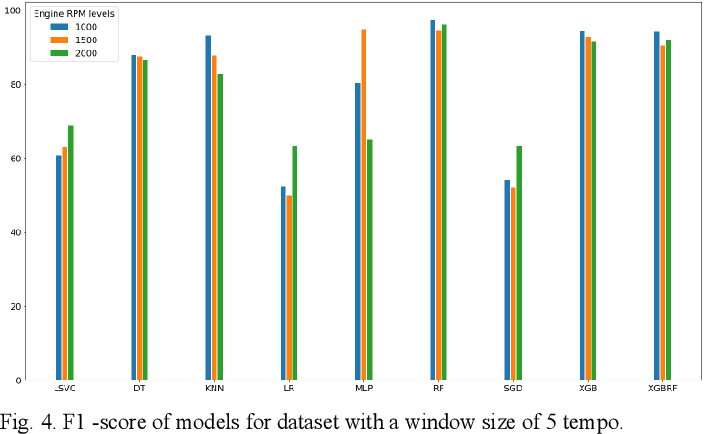 This paper deals with the identification of machines in a smart city environment. The concept of machine biometrics is proposed in this work for the first time, as a way to authenticate machine identities interacting with humans in everyday life. This definition is imposed in modern years where autonomous vehicles, social robots, etc. are considered active members of contemporary societies. In this context, the case of car identification from the engine behavioral biometrics is examined. For this purpose, 22 sound features were extracted and their discrimination capabilities were tested in combination with 9 different machine learning classifiers, towards identifying 5 car manufacturers. The experimental results revealed the ability of the proposed biometrics to identify cars with high accuracy up to 98% for the case of the Multilayer Perceptron (MLP) neural network model. 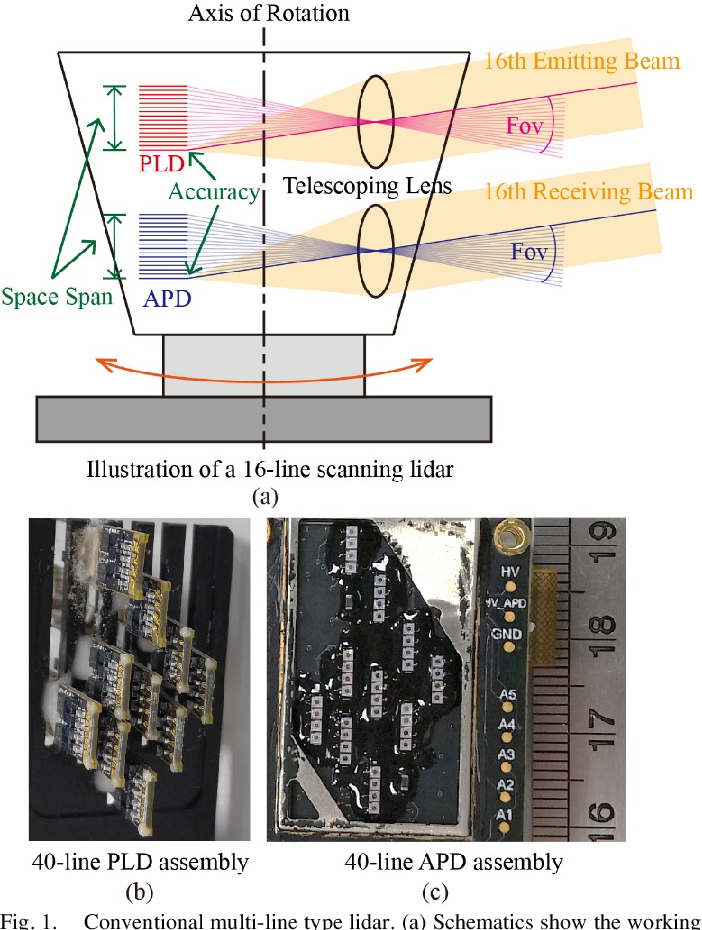 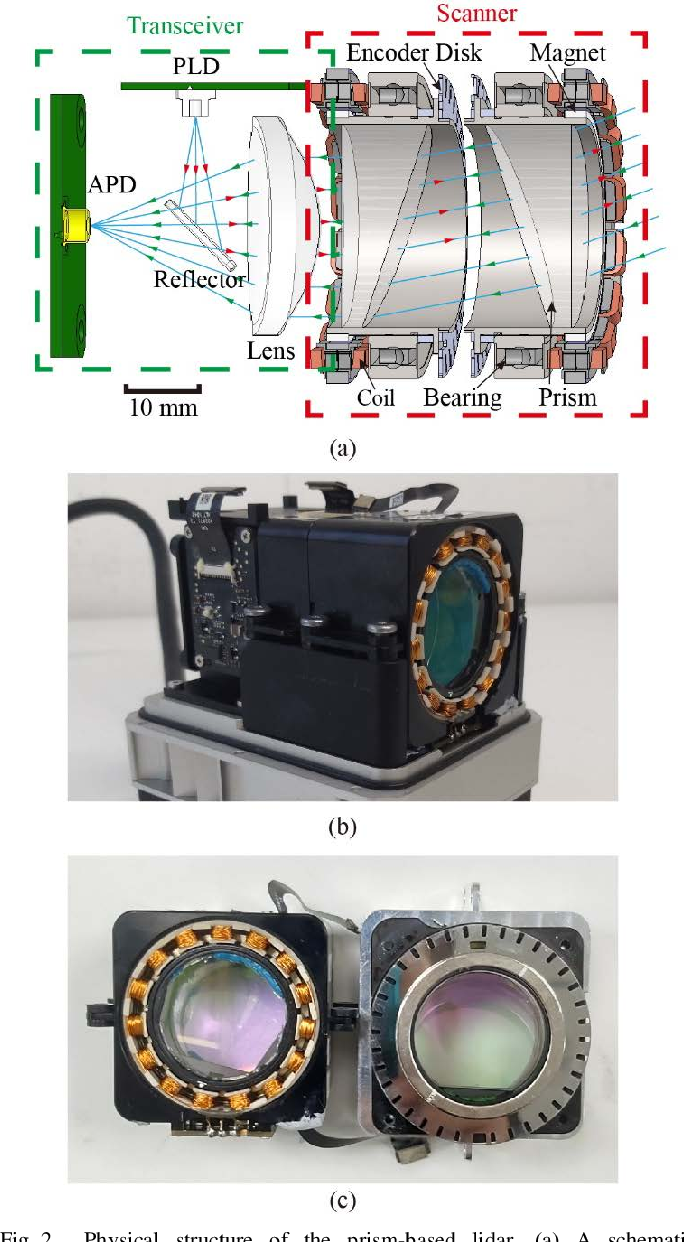 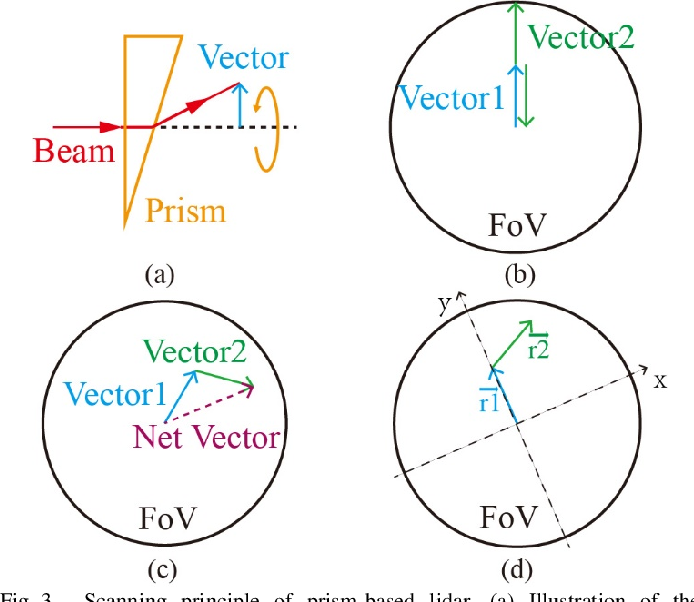 High performance lidars are essential in autonomous robots such as self-driving cars, automated ground vehicles and intelligent machines. Traditional mechanical scanning lidars offer superior performance in autonomous vehicles, but the potential mass application is limited by the inherent manufacturing difficulty. We propose a robotic lidar sensor based on incommensurable scanning that allows straightforward mass production and adoption in autonomous robots. Some unique features are additionally permitted by this incommensurable scanning. Similar to the fovea in human retina, this lidar features a peaked central angular density, enabling in applications that prefers eye-like attention. The incommensurable scanning method of this lidar could also provide a much higher resolution than conventional lidars which is beneficial in robotic applications such as sensor calibration. Examples making use of these advantageous features are demonstrated. 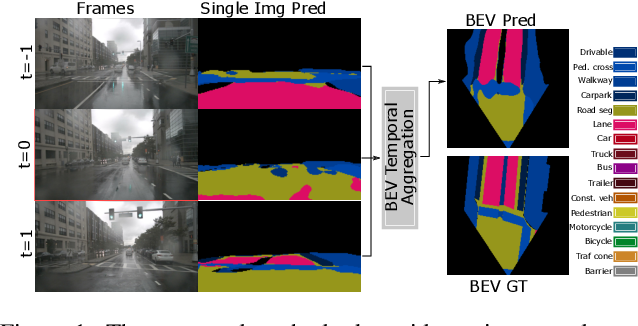 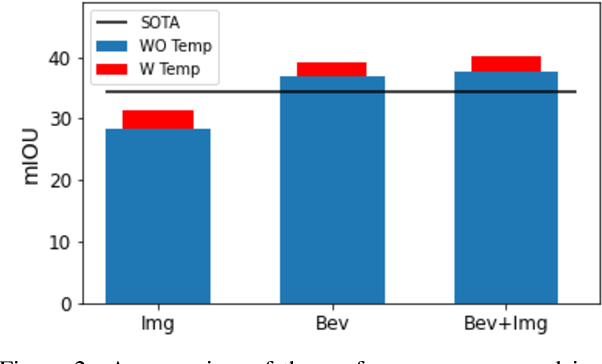 Autonomous navigation requires scene understanding of the action-space to move or anticipate events. For planner agents moving on the ground plane, such as autonomous vehicles, this translates to scene understanding in the bird's-eye view. However, the onboard cameras of autonomous cars are customarily mounted horizontally for a better view of the surrounding. In this work, we study scene understanding in the form of online estimation of semantic bird's-eye-view HD-maps using the video input from a single onboard camera. We study three key aspects of this task, image-level understanding, BEV level understanding, and the aggregation of temporal information. Based on these three pillars we propose a novel architecture that combines these three aspects. In our extensive experiments, we demonstrate that the considered aspects are complementary to each other for HD-map understanding. Furthermore, the proposed architecture significantly surpasses the current state-of-the-art. 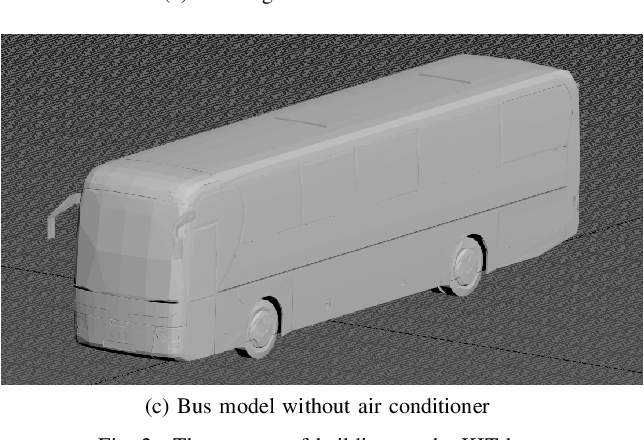 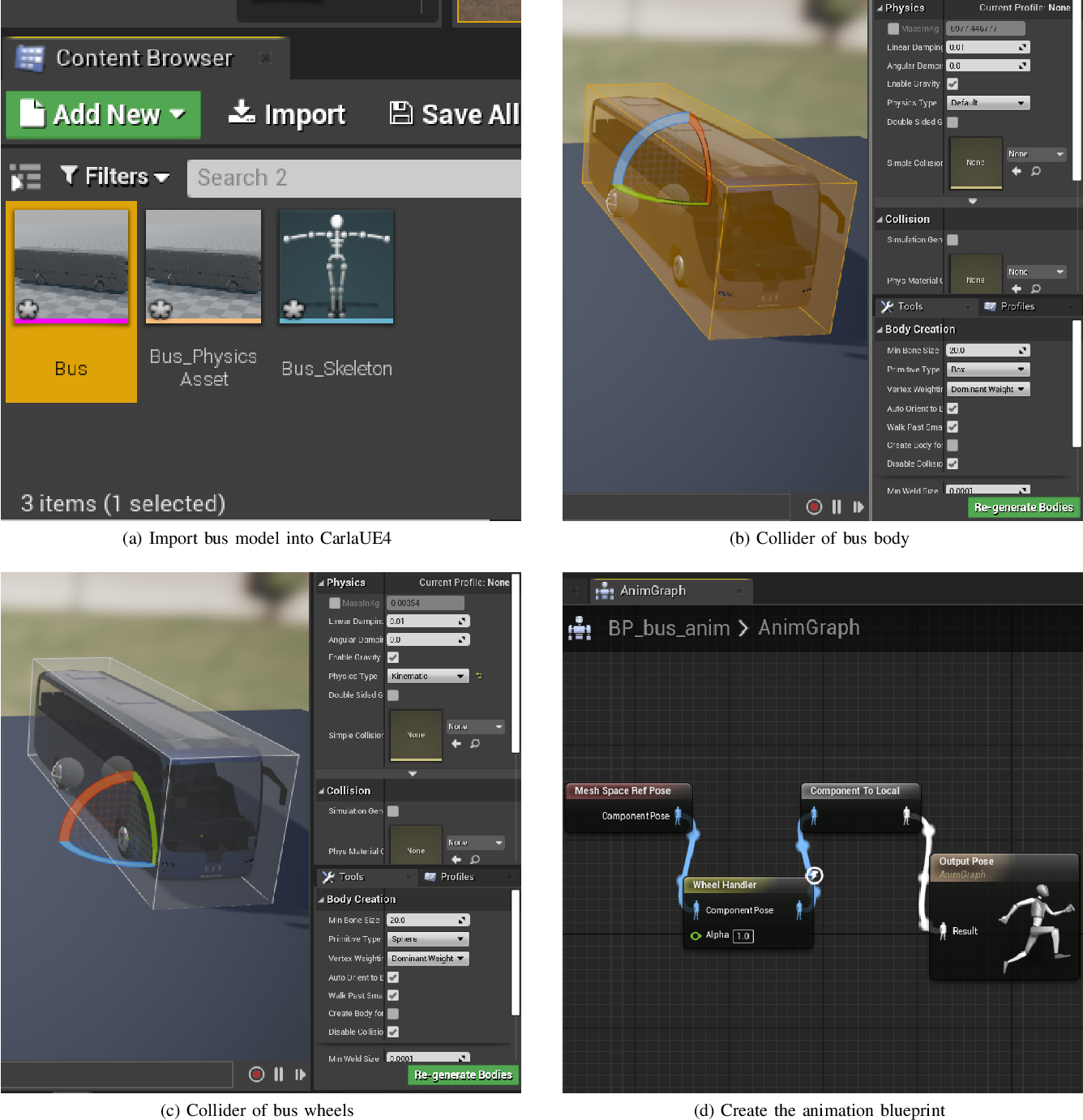 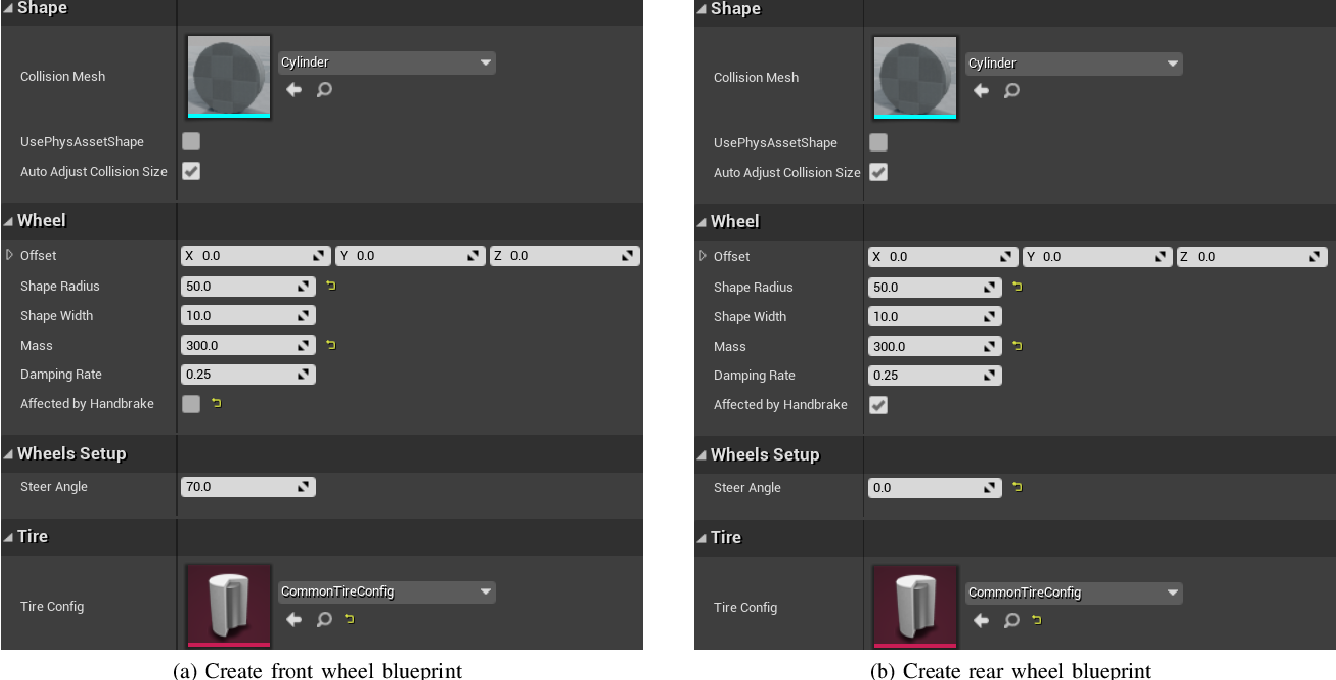 With the continuous development of science and technology, self-driving vehicles will surely change the nature of transportation and realize the automotive industry's transformation in the future. Compared with self-driving cars, self-driving buses are more efficient in carrying passengers and more environmentally friendly in terms of energy consumption. Therefore, it is speculated that in the future, self-driving buses will become more and more important. As a simulator for autonomous driving research, the CARLA simulator can help people accumulate experience in autonomous driving technology faster and safer. However, a shortcoming is that there is no modern bus model in the CARLA simulator. Consequently, people cannot simulate autonomous driving on buses or the scenarios interacting with buses. Therefore, we built a bus model in 3ds Max software and imported it into the CARLA to fill this gap. Our model, namely KIT bus, is proven to work in the CARLA by testing it with the autopilot simulation. The video demo is shown on our Youtube. 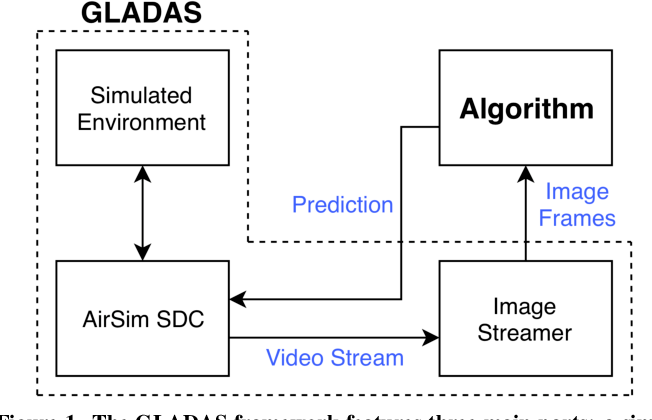 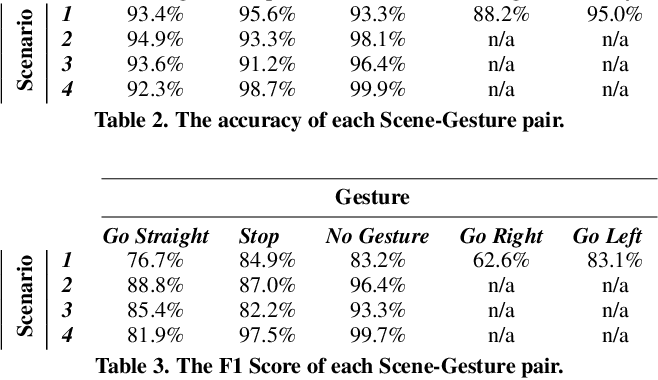 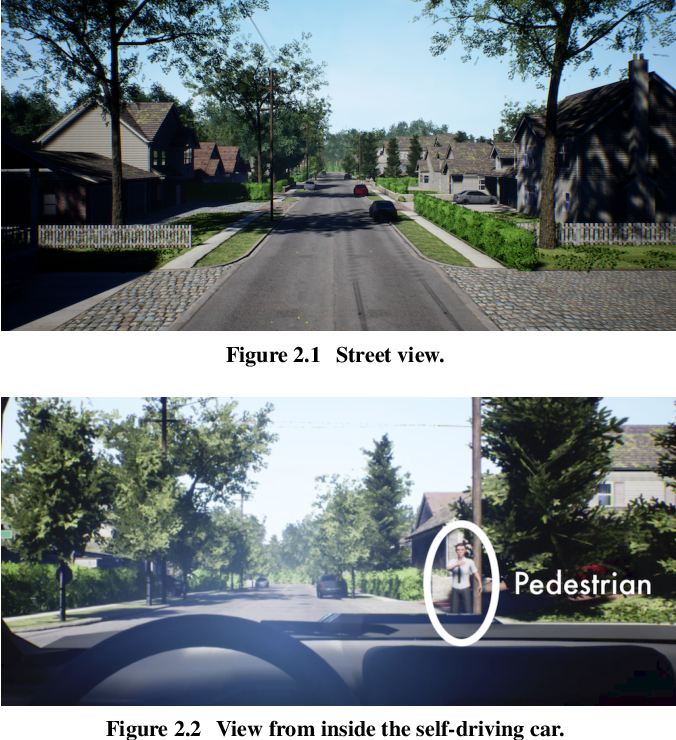 Human-computer interaction (HCI) is crucial for the safety of lives as autonomous vehicles (AVs) become commonplace. Yet, little effort has been put toward ensuring that AVs understand humans on the road. In this paper, we present GLADAS, a simulator-based research platform designed to teach AVs to understand pedestrian hand gestures. GLADAS supports the training, testing, and validation of deep learning-based self-driving car gesture recognition systems. We focus on gestures as they are a primordial (i.e, natural and common) way to interact with cars. To the best of our knowledge, GLADAS is the first system of its kind designed to provide an infrastructure for further research into human-AV interaction. We also develop a hand gesture recognition algorithm for self-driving cars, using GLADAS to evaluate its performance. Our results show that an AV understands human gestures 85.91% of the time, reinforcing the need for further research into human-AV interaction. 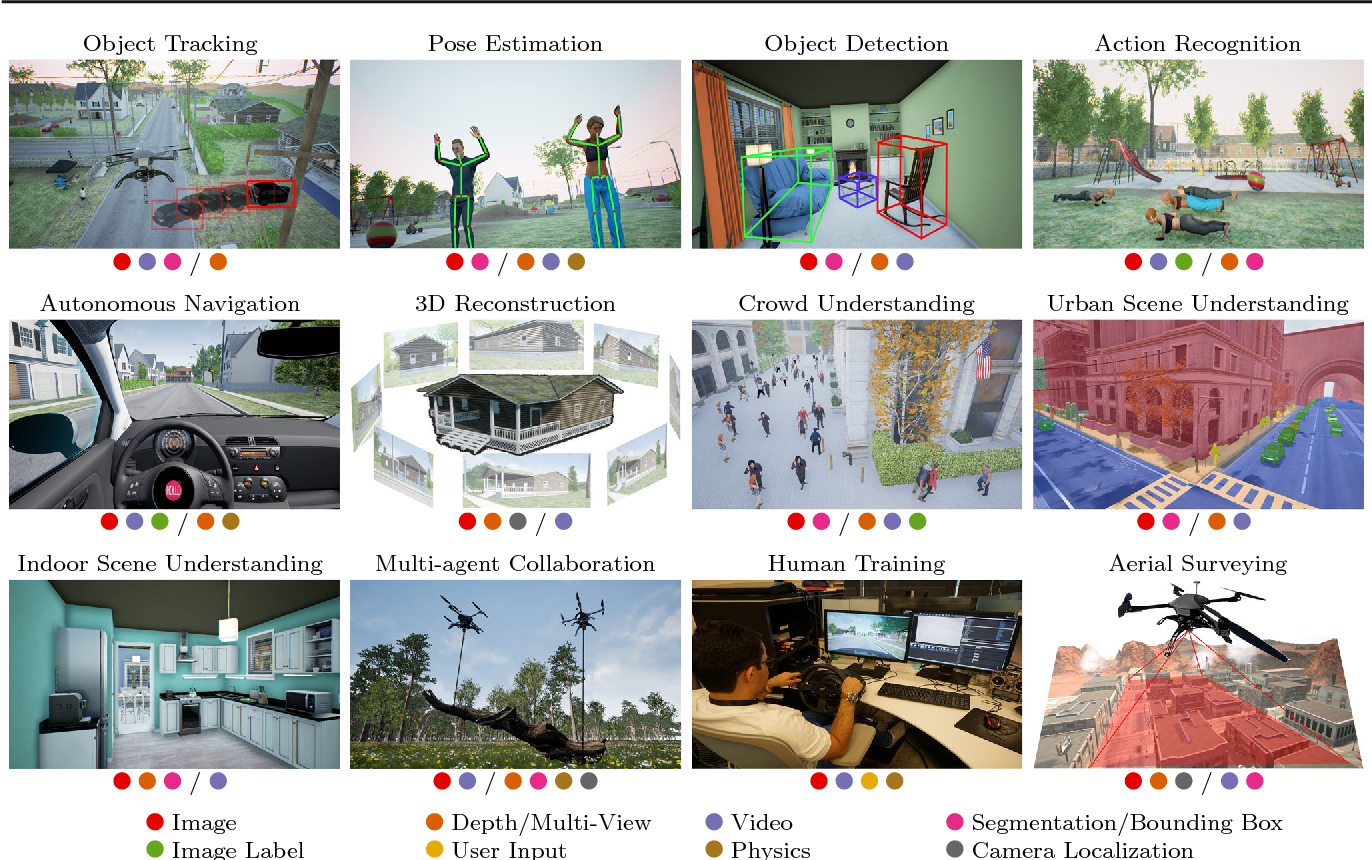 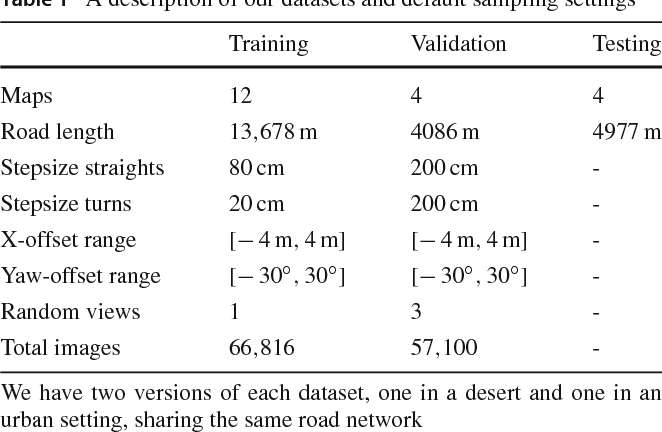 
* Published at the International Journal of Computer Vision (IJCV), 2018