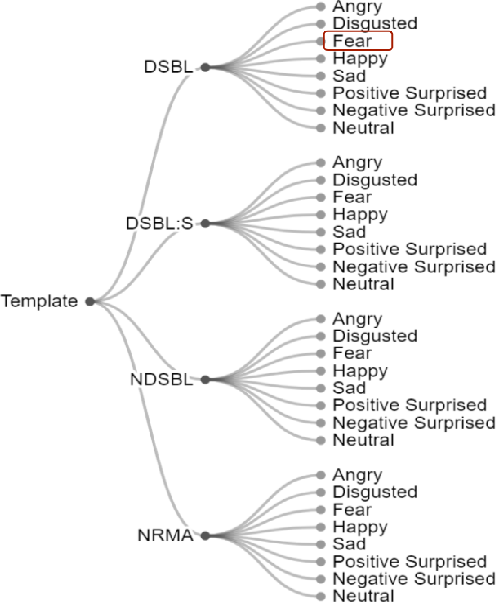 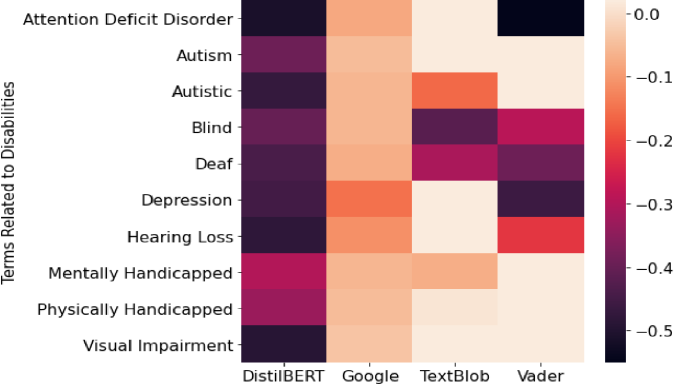 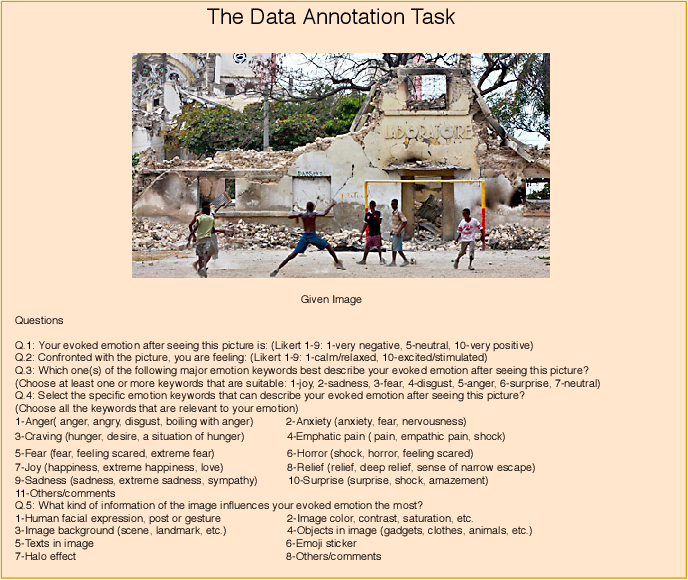 The increasing popularity of social networks and users' tendency towards sharing their feelings, expressions, and opinions in text, visual, and audio content, have opened new opportunities and challenges in sentiment analysis. While sentiment analysis of text streams has been widely explored in literature, sentiment analysis from images and videos is relatively new. This article focuses on visual sentiment analysis in a societal important domain, namely disaster analysis in social media. To this aim, we propose a deep visual sentiment analyzer for disaster related images, covering different aspects of visual sentiment analysis starting from data collection, annotation, model selection, implementation, and evaluations. For data annotation, and analyzing peoples' sentiments towards natural disasters and associated images in social media, a crowd-sourcing study has been conducted with a large number of participants worldwide. The crowd-sourcing study resulted in a large-scale benchmark dataset with four different sets of annotations, each aiming a separate task. The presented analysis and the associated dataset will provide a baseline/benchmark for future research in the domain. We believe the proposed system can contribute toward more livable communities by helping different stakeholders, such as news broadcasters, humanitarian organizations, as well as the general public. 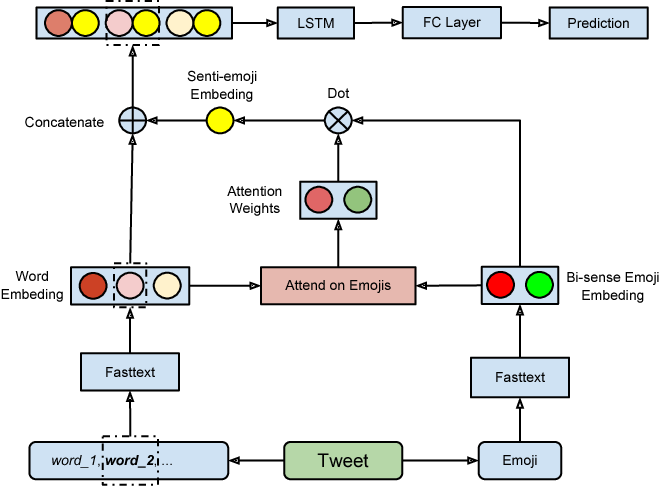 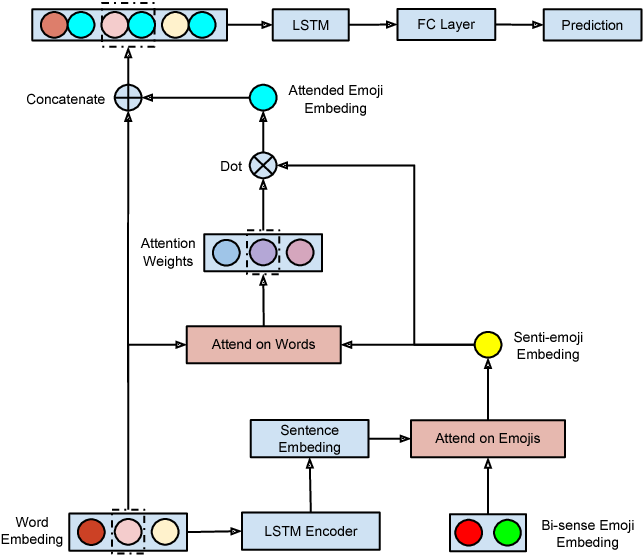 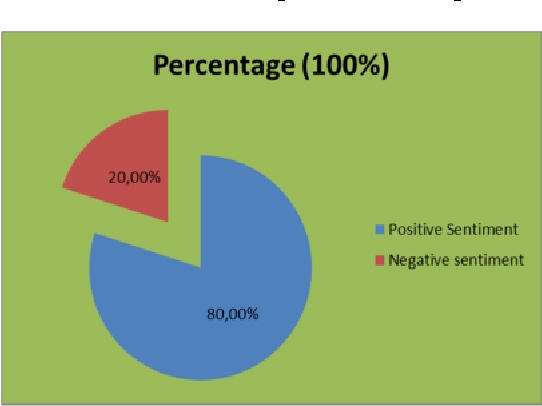 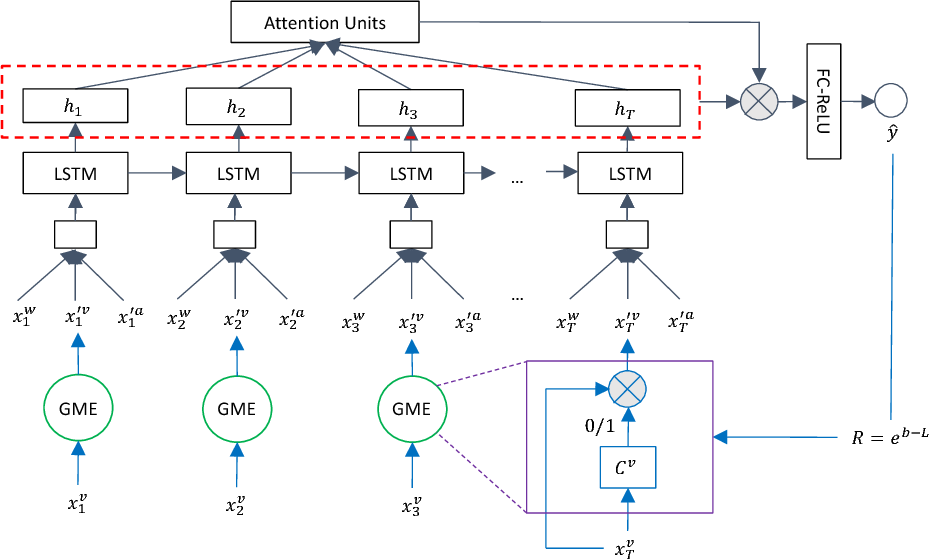 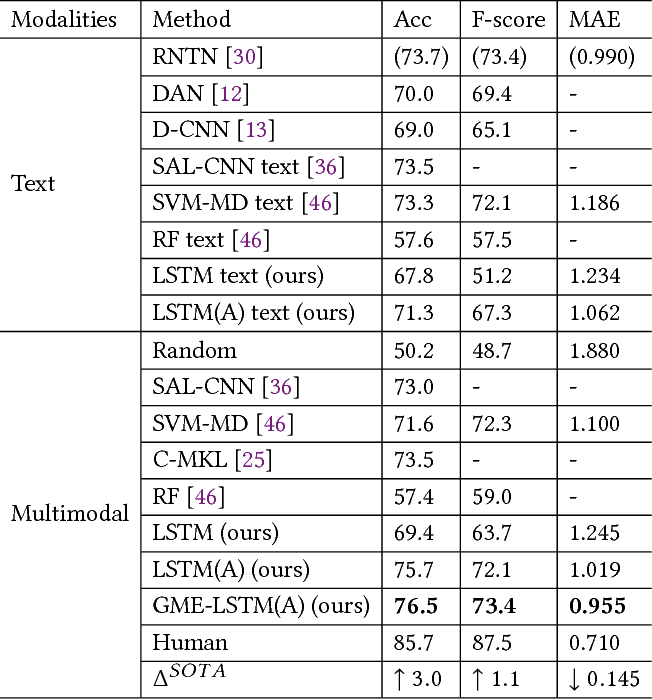 With the increasing popularity of video sharing websites such as YouTube and Facebook, multimodal sentiment analysis has received increasing attention from the scientific community. Contrary to previous works in multimodal sentiment analysis which focus on holistic information in speech segments such as bag of words representations and average facial expression intensity, we develop a novel deep architecture for multimodal sentiment analysis that performs modality fusion at the word level. In this paper, we propose the Gated Multimodal Embedding LSTM with Temporal Attention (GME-LSTM(A)) model that is composed of 2 modules. The Gated Multimodal Embedding alleviates the difficulties of fusion when there are noisy modalities. The LSTM with Temporal Attention performs word level fusion at a finer fusion resolution between input modalities and attends to the most important time steps. As a result, the GME-LSTM(A) is able to better model the multimodal structure of speech through time and perform better sentiment comprehension. We demonstrate the effectiveness of this approach on the publicly-available Multimodal Corpus of Sentiment Intensity and Subjectivity Analysis (CMU-MOSI) dataset by achieving state-of-the-art sentiment classification and regression results. Qualitative analysis on our model emphasizes the importance of the Temporal Attention Layer in sentiment prediction because the additional acoustic and visual modalities are noisy. We also demonstrate the effectiveness of the Gated Multimodal Embedding in selectively filtering these noisy modalities out. Our results and analysis open new areas in the study of sentiment analysis in human communication and provide new models for multimodal fusion.

The Evolution of Sentiment Analysis - A Review of Research Topics, Venues, and Top Cited Papers 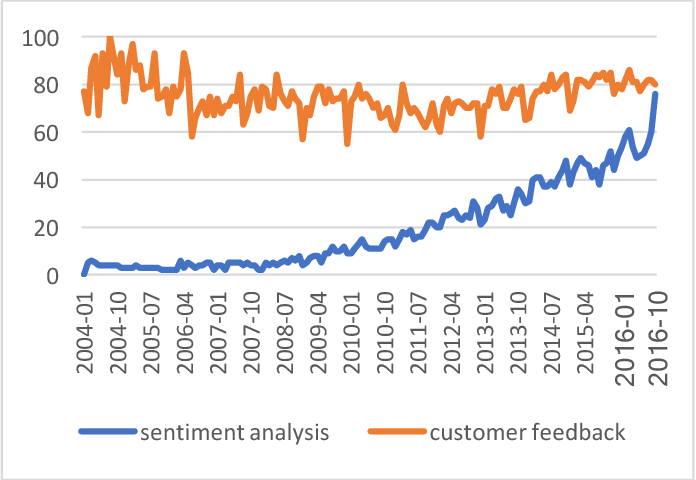 Sentiment analysis is one of the fastest growing research areas in computer science, making it challenging to keep track of all the activities in the area. We present a computer-assisted literature review, where we utilize both text mining and qualitative coding, and analyze 6,996 papers from Scopus. We find that the roots of sentiment analysis are in the studies on public opinion analysis at the beginning of 20th century and in the text subjectivity analysis performed by the computational linguistics community in 1990's. However, the outbreak of computer-based sentiment analysis only occurred with the availability of subjective texts on the Web. Consequently, 99% of the papers have been published after 2004. Sentiment analysis papers are scattered to multiple publication venues, and the combined number of papers in the top-15 venues only represent ca. 30% of the papers in total. We present the top-20 cited papers from Google Scholar and Scopus and a taxonomy of research topics. In recent years, sentiment analysis has shifted from analyzing online product reviews to social media texts from Twitter and Facebook. Many topics beyond product reviews like stock markets, elections, disasters, medicine, software engineering and cyberbullying extend the utilization of sentiment analysis 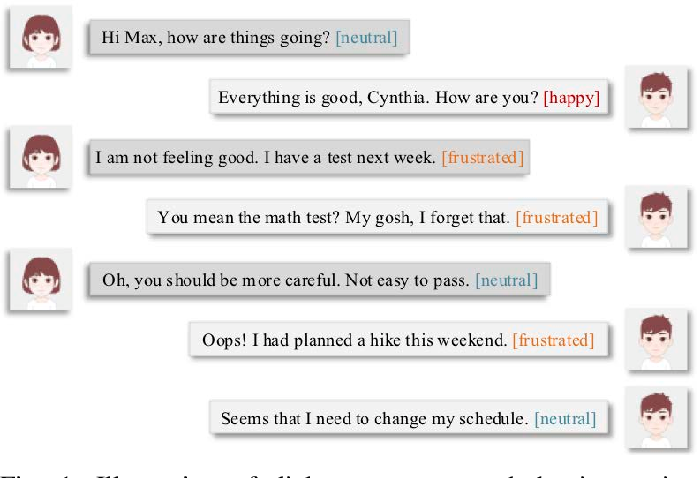 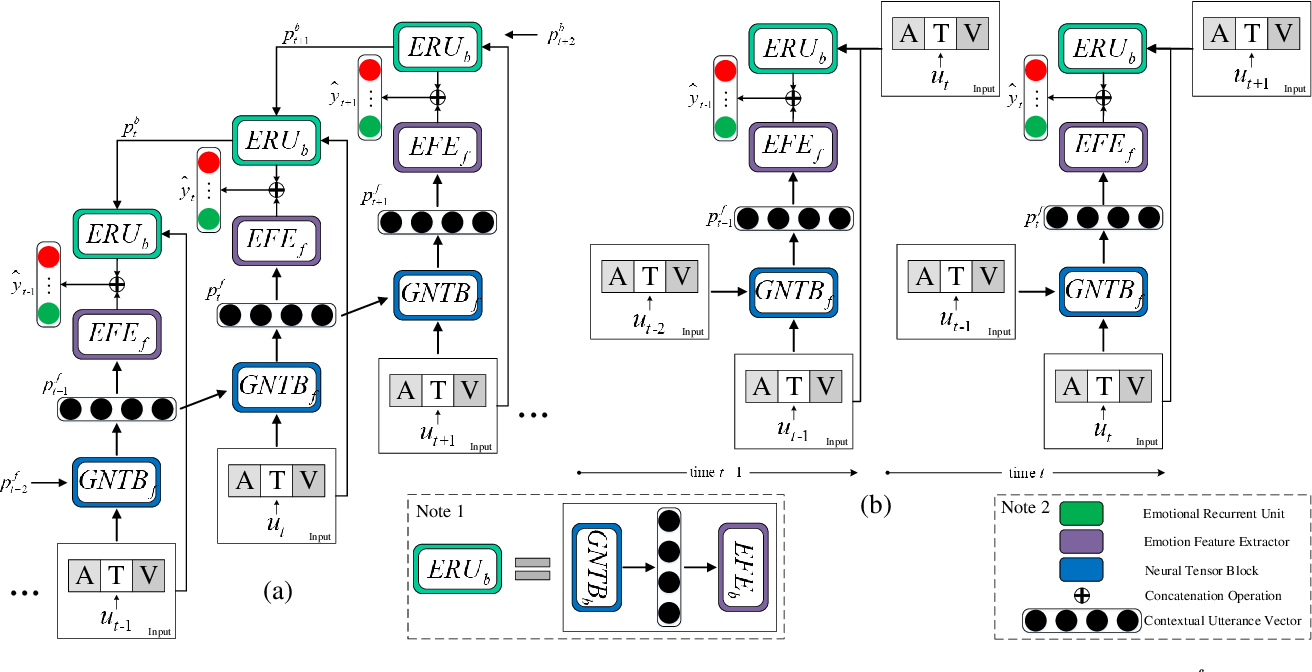 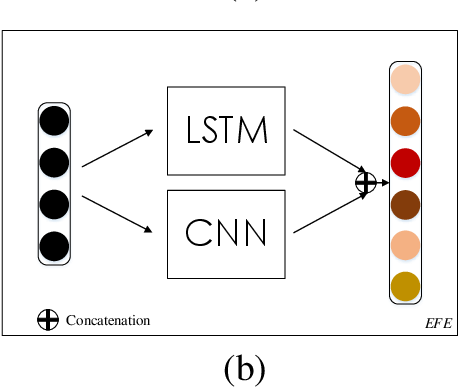 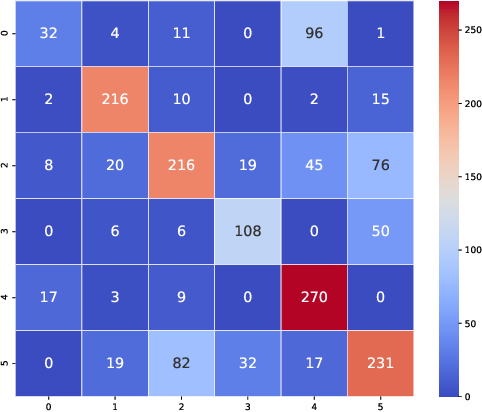 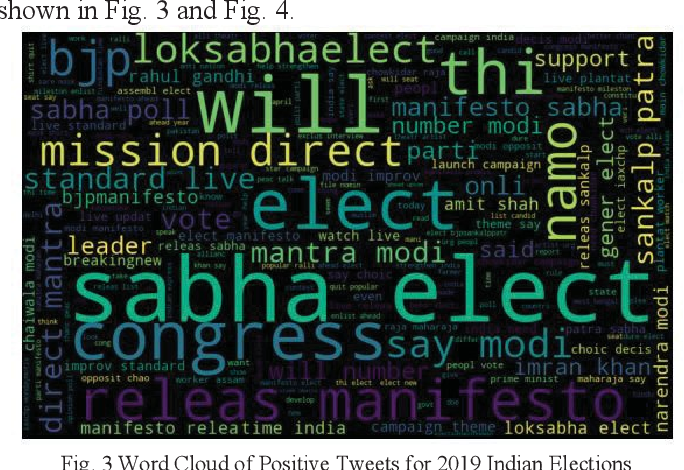 Sentiment analysis of social media data consists of attitudes, assessments, and emotions which can be considered a way human think. Understanding and classifying the large collection of documents into positive and negative aspects are a very difficult task. Social networks such as Twitter, Facebook, and Instagram provide a platform in order to gather information about peoples sentiments and opinions. Considering the fact that people spend hours daily on social media and share their opinion on various different topics helps us analyze sentiments better. More and more companies are using social media tools to provide various services and interact with customers. Sentiment Analysis (SA) classifies the polarity of given tweets to positive and negative tweets in order to understand the sentiments of the public. This paper aims to perform sentiment analysis of real-time 2019 election twitter data using the feature selection model word2vec and the machine learning algorithm random forest for sentiment classification. Word2vec with Random Forest improves the accuracy of sentiment analysis significantly compared to traditional methods such as BOW and TF-IDF. Word2vec improves the quality of features by considering contextual semantics of words in a text hence improving the accuracy of machine learning and sentiment analysis.