We present crowdsourcing as an additional modality to aid radiologists in the diagnosis of lung cancer from clinical chest computed tomography (CT) scans. More specifically, a complete workflow is introduced which can help maximize the sensitivity of lung nodule detection by utilizing the collective intelligence of the crowd. We combine the concept of overlapping thin-slab maximum intensity projections (TS-MIPs) and cine viewing to render short videos that can be outsourced as an annotation task to the crowd. These videos are generated by linearly interpolating overlapping TS-MIPs of CT slices through the depth of each quadrant of a patient's lung. The resultant videos are outsourced to an online community of non-expert users who, after a brief tutorial, annotate suspected nodules in these video segments. Using our crowdsourcing workflow, we achieved a lung nodule detection sensitivity of over 90% for 20 patient CT datasets (containing 178 lung nodules with sizes between 1-30mm), and only 47 false positives from a total of 1021 annotations on nodules of all sizes (96% sensitivity for nodules$>$4mm). These results show that crowdsourcing can be a robust and scalable modality to aid radiologists in screening for lung cancer, directly or in combination with computer-aided detection (CAD) algorithms. For CAD algorithms, the presented workflow can provide highly accurate training data to overcome the high false-positive rate (per scan) problem. We also provide, for the first time, analysis on nodule size and position which can help improve CAD algorithms.

This paper presents a tumor detection algorithm from mammogram. The proposed system focuses on the solution of two problems. One is how to detect tumors as suspicious regions with a very weak contrast to their background and another is how to extract features which categorize tumors. The tumor detection method follows the scheme of (a) mammogram enhancement. (b) The segmentation of the tumor area. (c) The extraction of features from the segmented tumor area. (d) The use of SVM classifier. The enhancement can be defined as conversion of the image quality to a better and more understandable level. The mammogram enhancement procedure includes filtering, top hat operation, DWT. Then the contrast stretching is used to increase the contrast of the image. The segmentation of mammogram images has been playing an important role to improve the detection and diagnosis of breast cancer. The most common segmentation method used is thresholding. The features are extracted from the segmented breast area. Next stage include, which classifies the regions using the SVM classifier. The method was tested on 75 mammographic images, from the mini-MIAS database. The methodology achieved a sensitivity of 88.75%. 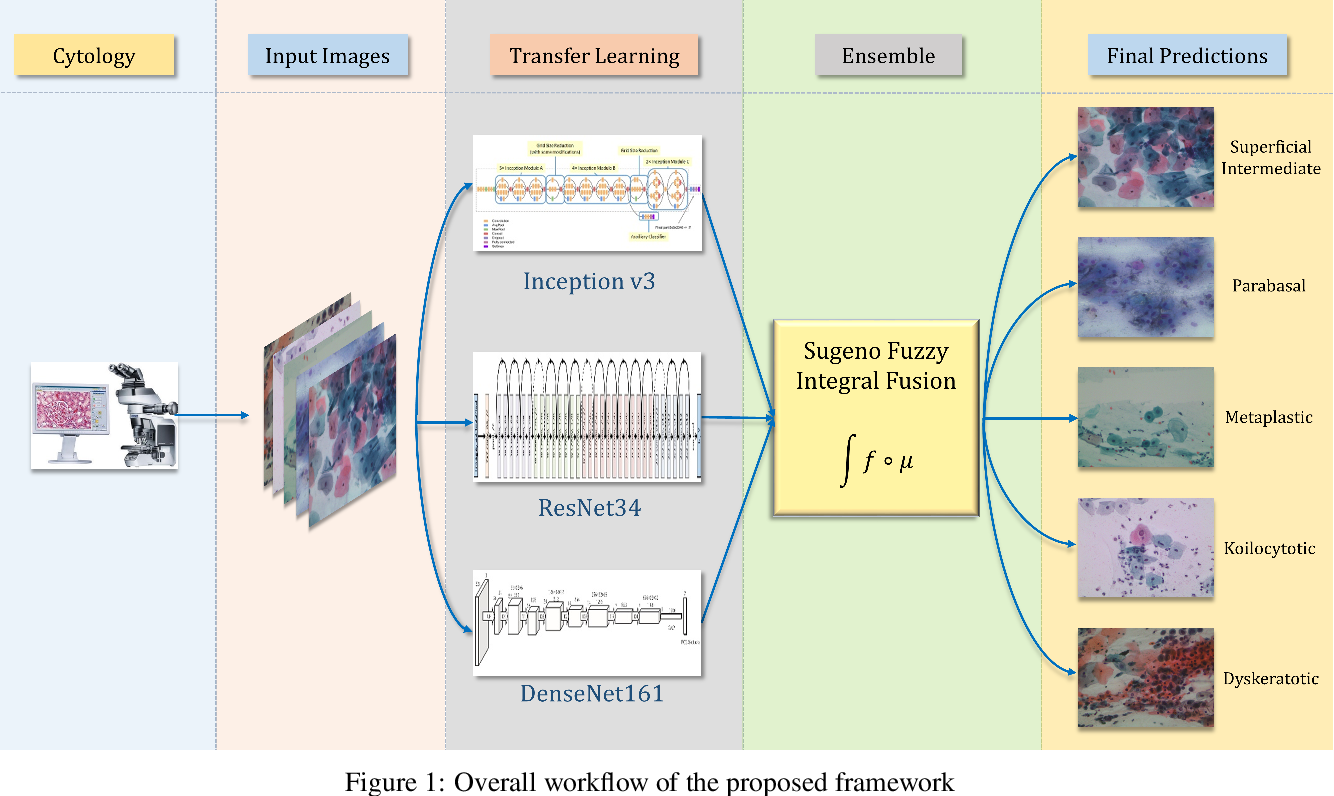 Cervical cancer is the fourth most common category of cancer, affecting more than 500,000 women annually, owing to the slow detection procedure. Early diagnosis can help in treating and even curing cancer, but the tedious, time-consuming testing process makes it impossible to conduct population-wise screening. To aid the pathologists in efficient and reliable detection, in this paper, we propose a fully automated computer-aided diagnosis tool for classifying single-cell and slide images of cervical cancer. The main concern in developing an automatic detection tool for biomedical image classification is the low availability of publicly accessible data. Ensemble Learning is a popular approach for image classification, but simplistic approaches that leverage pre-determined weights to classifiers fail to perform satisfactorily. In this research, we use the Sugeno Fuzzy Integral to ensemble the decision scores from three popular pretrained deep learning models, namely, Inception v3, DenseNet-161 and ResNet-34. The proposed Fuzzy fusion is capable of taking into consideration the confidence scores of the classifiers for each sample, and thus adaptively changing the importance given to each classifier, capturing the complementary information supplied by each, thus leading to superior classification performance. We evaluated the proposed method on three publicly available datasets, the Mendeley Liquid Based Cytology (LBC) dataset, the SIPaKMeD Whole Slide Image (WSI) dataset, and the SIPaKMeD Single Cell Image (SCI) dataset, and the results thus yielded are promising. Analysis of the approach using GradCAM-based visual representations and statistical tests, and comparison of the method with existing and baseline models in literature justify the efficacy of the approach.

Mitosis count is an important biomarker for prognosis of various cancers. At present, pathologists typically perform manual counting on a few selected regions of interest in breast whole-slide-images (WSIs) of patient biopsies. This task is very time-consuming, tedious and subjective. Automated mitosis detection methods have made great advances in recent years. However, these methods require exhaustive labeling of a large number of selected regions of interest. This task is very expensive because expert pathologists are needed for reliable and accurate annotations. In this paper, we present a semi-supervised mitosis detection method which is designed to leverage a large number of unlabeled breast cancer WSIs. As a result, our method capitalizes on the growing number of digitized histology images, without relying on exhaustive annotations, subsequently improving mitosis detection. Our method first learns a mitosis detector from labeled data, uses this detector to mine additional mitosis samples from unlabeled WSIs, and then trains the final model using this larger and diverse set of mitosis samples. The use of unlabeled data improves F1-score by $\sim$5\% compared to our best performing fully-supervised model on the TUPAC validation set. Our submission (single model) to TUPAC challenge ranks highly on the leaderboard with an F1-score of 0.64. 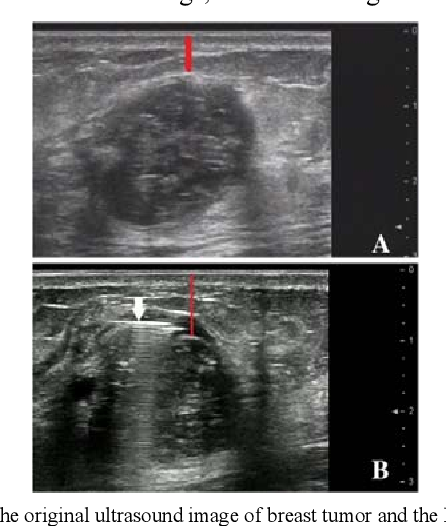 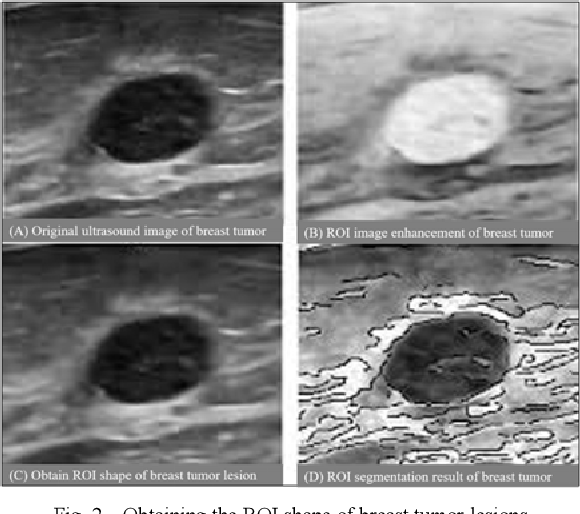 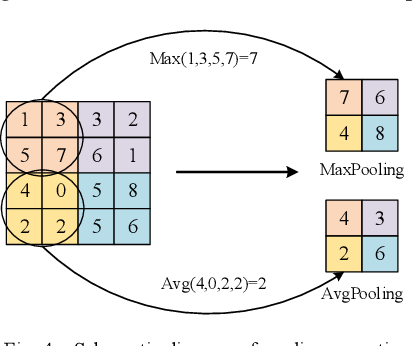 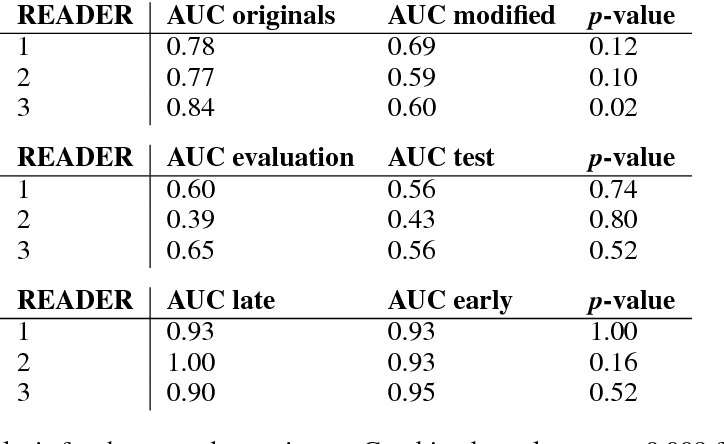 $\textbf{Purpose}$ To train a cycle-consistent generative adversarial network (CycleGAN) on mammographic data to inject or remove features of malignancy, and to determine whether these AI-mediated attacks can be detected by radiologists. $\textbf{Material and Methods}$ From the two publicly available datasets, BCDR and INbreast, we selected images from cancer patients and healthy controls. An internal dataset served as test data, withheld during training. We ran two experiments training CycleGAN on low and higher resolution images ($256 \times 256$ px and $512 \times 408$ px). Three radiologists read the images and rated the likelihood of malignancy on a scale from 1-5 and the likelihood of the image being manipulated. The readout was evaluated by ROC analysis (Area under the ROC curve = AUC). $\textbf{Results}$ At the lower resolution, only one radiologist exhibited markedly lower detection of cancer (AUC=0.85 vs 0.63, p=0.06), while the other two were unaffected (0.67 vs. 0.69 and 0.75 vs. 0.77, p=0.55). Only one radiologist could discriminate between original and modified images slightly better than guessing/chance (0.66, p=0.008). At the higher resolution, all radiologists showed significantly lower detection rate of cancer in the modified images (0.77-0.84 vs. 0.59-0.69, p=0.008), however, they were now able to reliably detect modified images due to better visibility of artifacts (0.92, 0.92 and 0.97). $\textbf{Conclusion}$ A CycleGAN can implicitly learn malignant features and inject or remove them so that a substantial proportion of small mammographic images would consequently be misdiagnosed. At higher resolutions, however, the method is currently limited and has a clear trade-off between manipulation of images and introduction of artifacts.

Obtaining a large amount of labeled data in medical imaging is laborious and time-consuming, especially for histopathology. However, it is much easier and cheaper to get unlabeled data from whole-slide images (WSIs). Semi-supervised learning (SSL) is an effective way to utilize unlabeled data and alleviate the need for labeled data. For this reason, we proposed a framework that employs an SSL method to accurately detect cancerous regions with a novel annotation method called Minimal Point-Based annotation, and then utilize the predicted results with an innovative hybrid loss to train a classification model for subtyping. The annotator only needs to mark a few points and label them are cancer or not in each WSI. Experiments on three significant subtypes of renal cell carcinoma (RCC) proved that the performance of the classifier trained with the Min-Point annotated dataset is comparable to a classifier trained with the segmentation annotated dataset for cancer region detection. And the subtyping model outperforms a model trained with only diagnostic labels by 12% in terms of f1-score for testing WSIs. 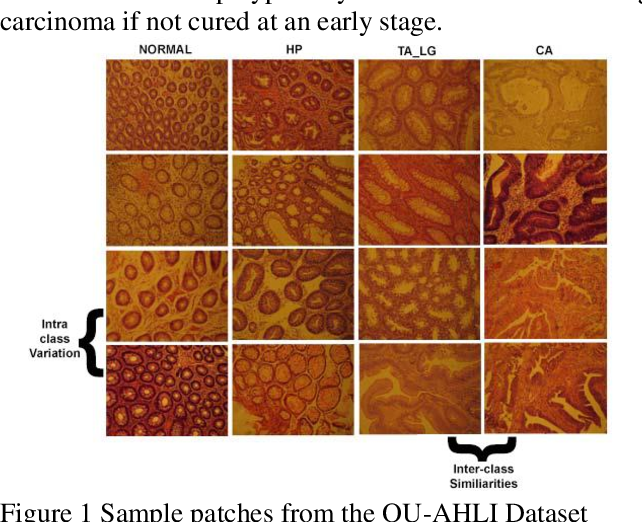 Computer-aided diagnosis (CAD) based on histopathological imaging has progressed rapidly in recent years with the rise of machine learning based methodologies. Traditional approaches consist of training a classification model using features extracted from the images, based on textures or morphological properties. Recently, deep-learning based methods have been applied directly to the raw (unprocessed) data. However, their usability is impacted by the paucity of annotated data in the biomedical sector. In order to leverage the learning capabilities of deep Convolutional Neural Nets (CNNs) within the confines of limited labelled data, in this study we shall investigate the transfer learning approaches that aim to apply the knowledge gained from solving a source (e.g., non-medical) problem, to learn better predictive models for the target (e.g., biomedical) task. As an alternative, we shall further propose a new adaptive and compact CNN based architecture that can be trained from scratch even on scarce and low-resolution data. Moreover, we conduct quantitative comparative evaluations among the traditional methods, transfer learning-based methods and the proposed adaptive approach for the particular task of cancer detection and identification from scarce and low-resolution histology images. Over the largest benchmark dataset formed for this purpose, the proposed adaptive approach achieved a higher cancer detection accuracy with a significant gap, whereas the deep CNNs with transfer learning achieved a superior cancer identification. 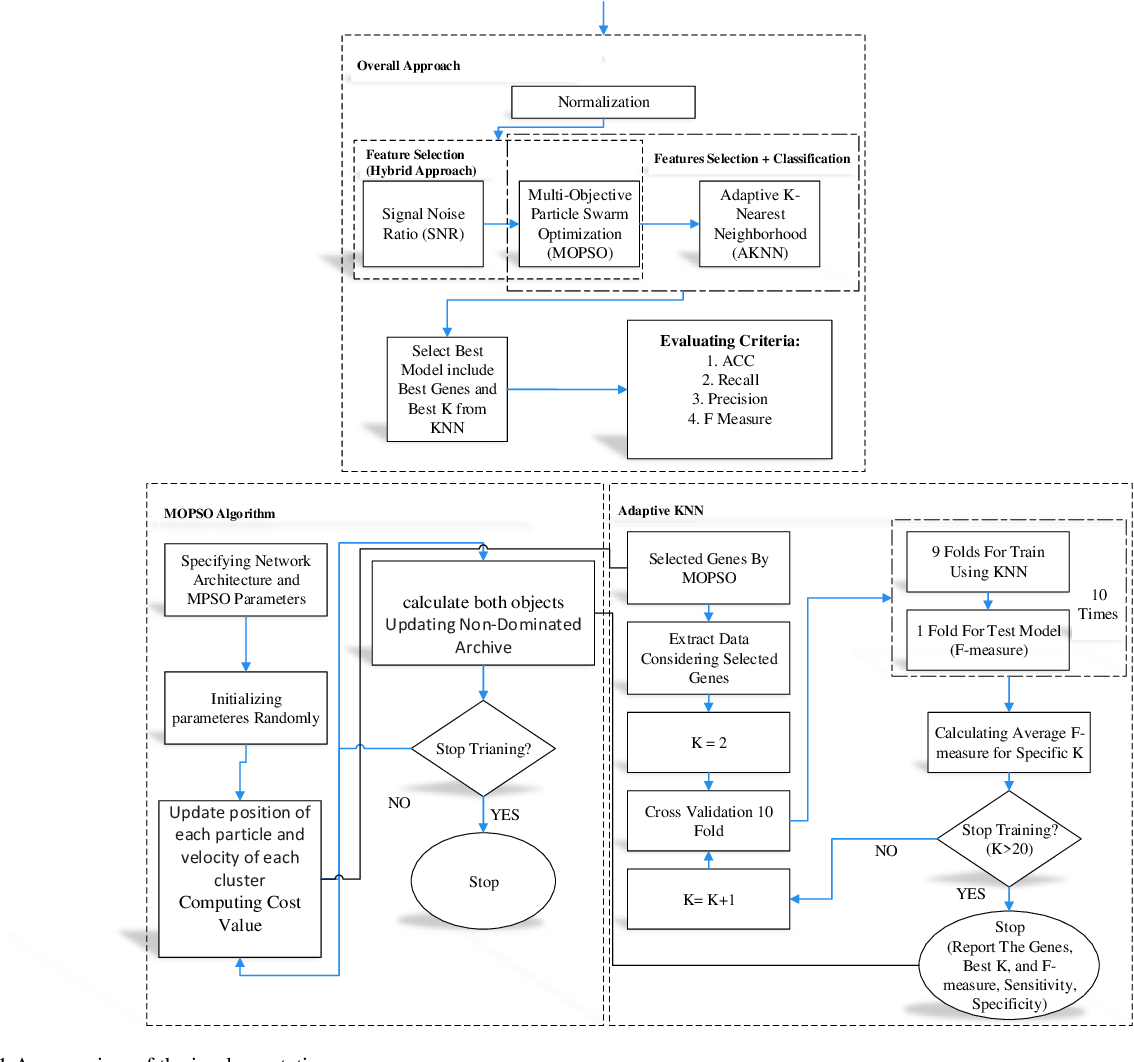 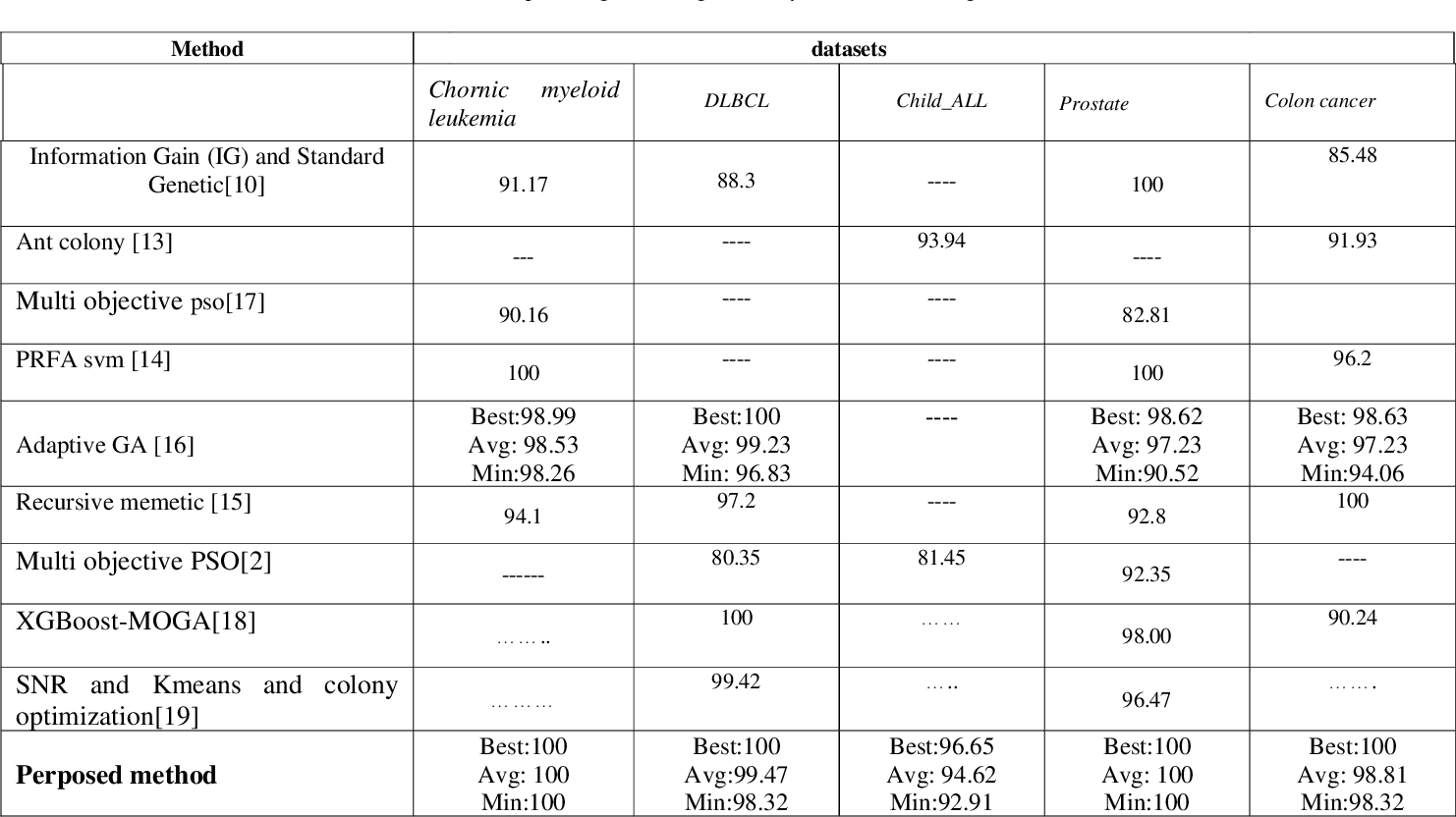 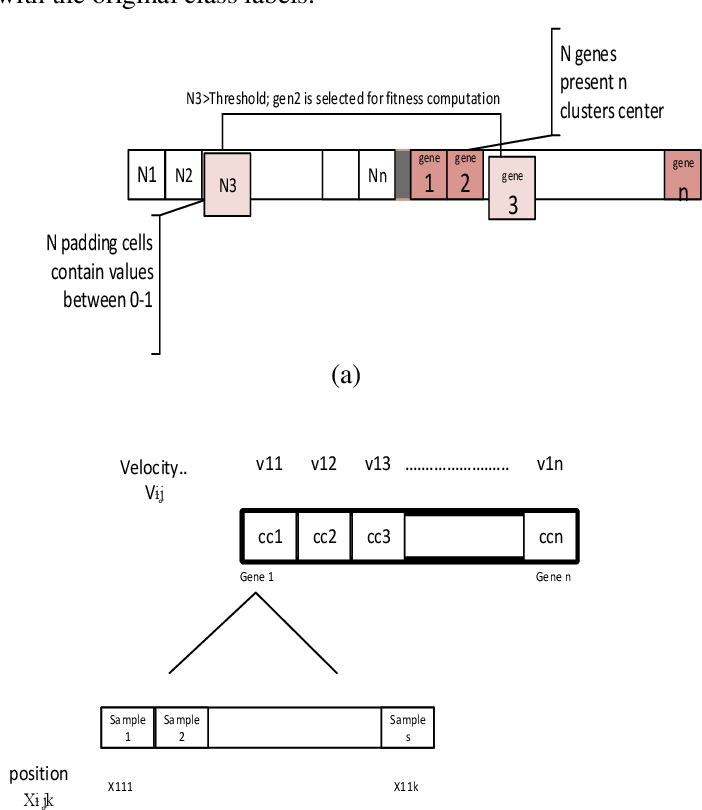 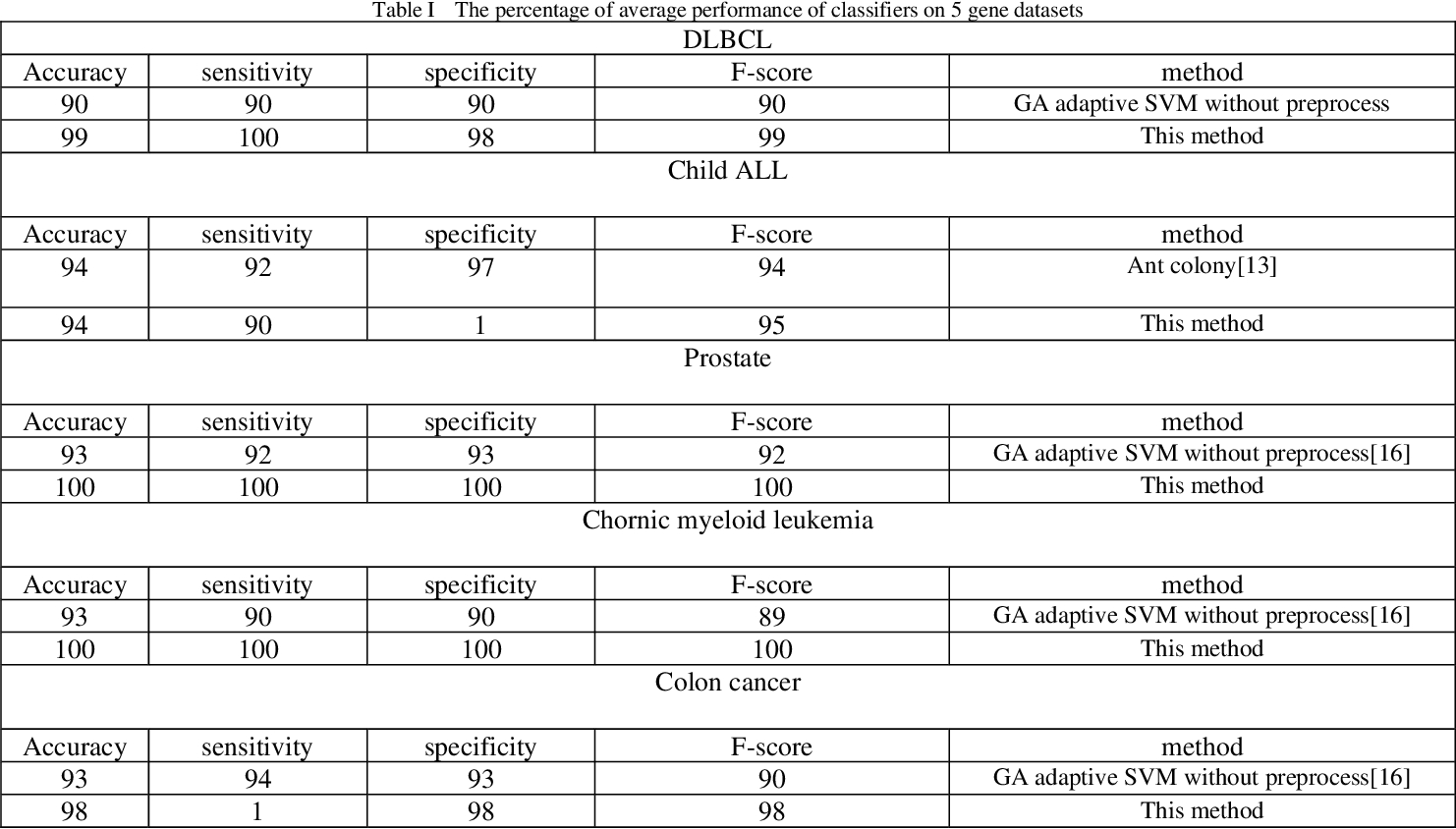 Cancer detection is one of the key research topics in the medical field. Accurate detection of different cancer types is valuable in providing better treatment facilities and risk minimization for patients. This paper deals with the classification problem of human cancer diseases by using gene expression data. It is presented a new methodology to analyze microarray datasets and efficiently classify cancer diseases. The new method first employs Signal to Noise Ratio (SNR) to find a list of a small subset of non-redundant genes. Then, after normalization, it is used Multi-Objective Particle Swarm Optimization (MOPSO) for feature selection and employed Adaptive K-Nearest Neighborhood (KNN) for cancer disease classification. This method improves the classification accuracy of cancer classification by reducing the number of features. The proposed methodology is evaluated by classifying cancer diseases in five cancer datasets. The results are compared with the most recent approaches, which increases the classification accuracy in each dataset. 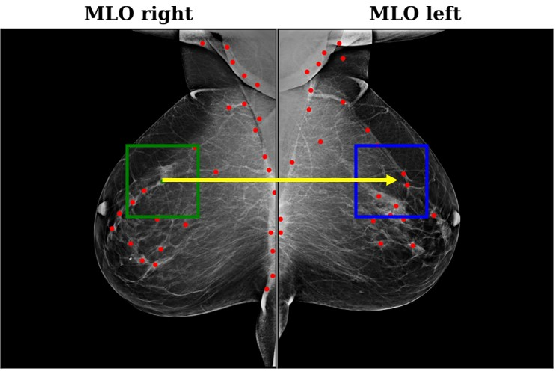 Convolutional Neural Networks (CNN) have had a huge success in many areas of computer vision and medical image analysis. However, there is still an immense potential for performance improvement in mammogram breast cancer detection Computer-Aided Detection (CAD) systems by integrating all the information that the radiologist utilizes, such as symmetry and temporal data. In this work, we proposed a patch based multi-input CNN that learns symmetrical difference to detect breast masses. The network was trained on a large-scale dataset of 28294 mammogram images. The performance was compared to a baseline architecture without symmetry context using Area Under the ROC Curve (AUC) and Competition Performance Metric (CPM). At candidate level, AUC value of 0.933 with 95% confidence interval of [0.920, 0.954] was obtained when symmetry information is incorporated in comparison with baseline architecture which yielded AUC value of 0.929 with [0.919, 0.947] confidence interval. By incorporating symmetrical information, although there was no a significant candidate level performance again (p = 0.111), we have found a compelling result at exam level with CPM value of 0.733 (p = 0.001). We believe that including temporal data, and adding benign class to the dataset could improve the detection performance.