A non-parametric mixture model for topic modeling over time 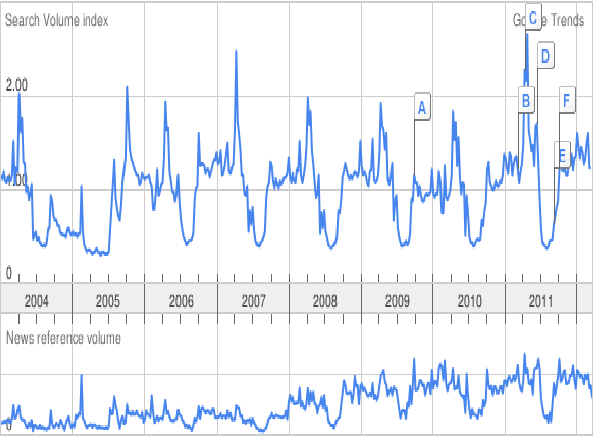 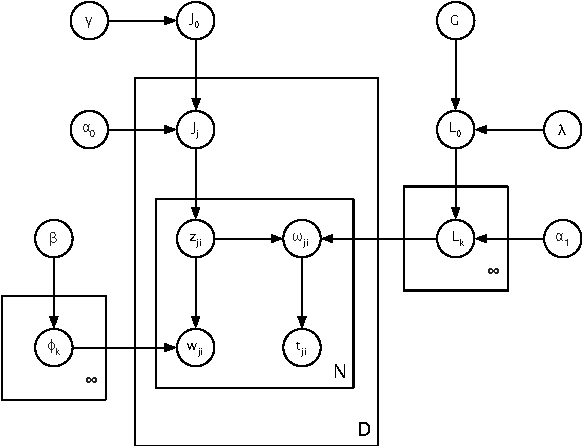 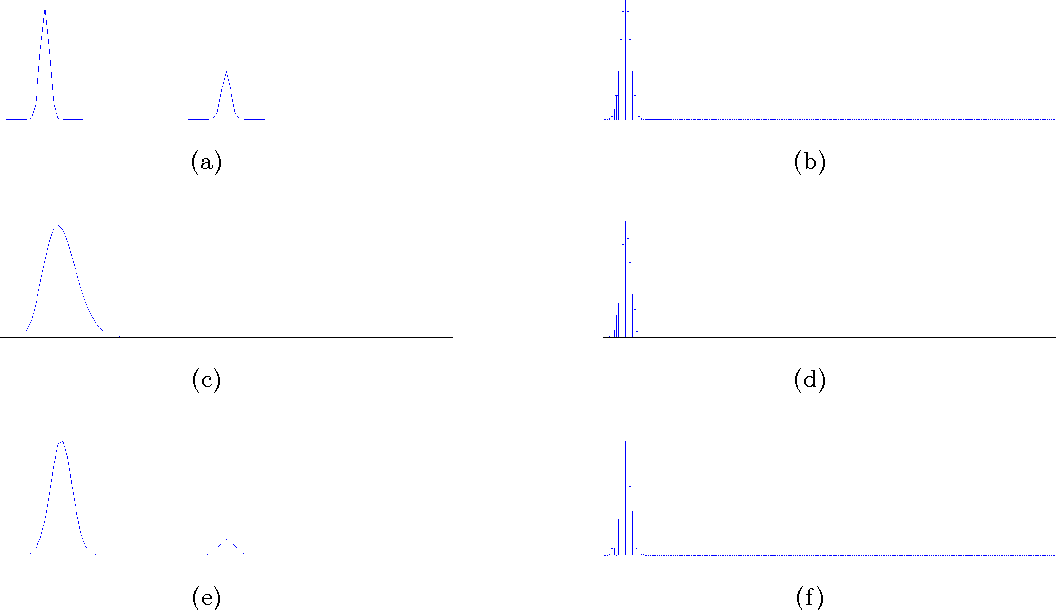 A single, stationary topic model such as latent Dirichlet allocation is inappropriate for modeling corpora that span long time periods, as the popularity of topics is likely to change over time. A number of models that incorporate time have been proposed, but in general they either exhibit limited forms of temporal variation, or require computationally expensive inference methods. In this paper we propose non-parametric Topics over Time (npTOT), a model for time-varying topics that allows an unbounded number of topics and exible distribution over the temporal variations in those topics' popularity. We develop a collapsed Gibbs sampler for the proposed model and compare against existing models on synthetic and real document sets.

Twitter data is extremely noisy -- each tweet is short, unstructured and with informal language, a challenge for current topic modeling. On the other hand, tweets are accompanied by extra information such as authorship, hashtags and the user-follower network. Exploiting this additional information, we propose the Twitter-Network (TN) topic model to jointly model the text and the social network in a full Bayesian nonparametric way. The TN topic model employs the hierarchical Poisson-Dirichlet processes (PDP) for text modeling and a Gaussian process random function model for social network modeling. We show that the TN topic model significantly outperforms several existing nonparametric models due to its flexibility. Moreover, the TN topic model enables additional informative inference such as authors' interests, hashtag analysis, as well as leading to further applications such as author recommendation, automatic topic labeling and hashtag suggestion. Note our general inference framework can readily be applied to other topic models with embedded PDP nodes. 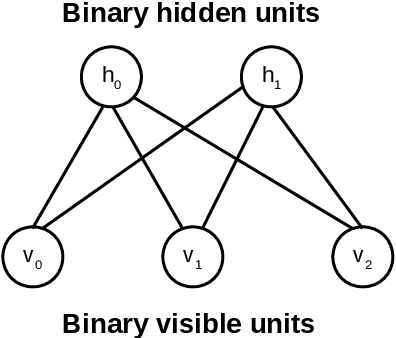 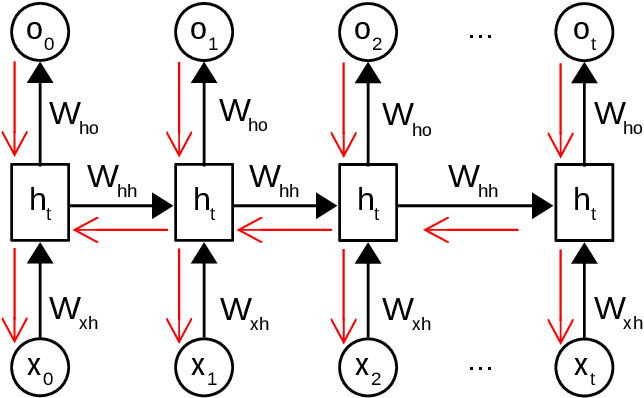 Topic models such as LDA, DocNADE, iDocNADEe have been popular in document analysis. However, the traditional topic models have several limitations including: (1) Bag-of-words (BoW) assumption, where they ignore word ordering, (2) Data sparsity, where the application of topic models is challenging due to limited word co-occurrences, leading to incoherent topics and (3) No Continuous Learning framework for topic learning in lifelong fashion, exploiting historical knowledge (or latent topics) and minimizing catastrophic forgetting. This thesis focuses on addressing the above challenges within neural topic modeling framework. We propose: (1) Contextualized topic model that combines a topic and a language model and introduces linguistic structures (such as word ordering, syntactic and semantic features, etc.) in topic modeling, (2) A novel lifelong learning mechanism into neural topic modeling framework to demonstrate continuous learning in sequential document collections and minimizing catastrophic forgetting. Additionally, we perform a selective data augmentation to alleviate the need for complete historical corpora during data hallucination or replay.

Much of scientific progress stems from previously published findings, but searching through the vast sea of scientific publications is difficult. We often rely on metrics of scholarly authority to find the prominent authors but these authority indices do not differentiate authority based on research topics. We present Latent Topical-Authority Indexing (LTAI) for jointly modeling the topics, citations, and topical authority in a corpus of academic papers. Compared to previous models, LTAI differs in two main aspects. First, it explicitly models the generative process of the citations, rather than treating the citations as given. Second, it models each author's influence on citations of a paper based on the topics of the cited papers, as well as the citing papers. We fit LTAI to four academic corpora: CORA, Arxiv Physics, PNAS, and Citeseer. We compare the performance of LTAI against various baselines, starting with the latent Dirichlet allocation, to the more advanced models including author-link topic model and dynamic author citation topic model. The results show that LTAI achieves improved accuracy over other similar models when predicting words, citations and authors of publications.


* Accepted by Transactions of the Association for Computational Linguistics (TACL); to appear 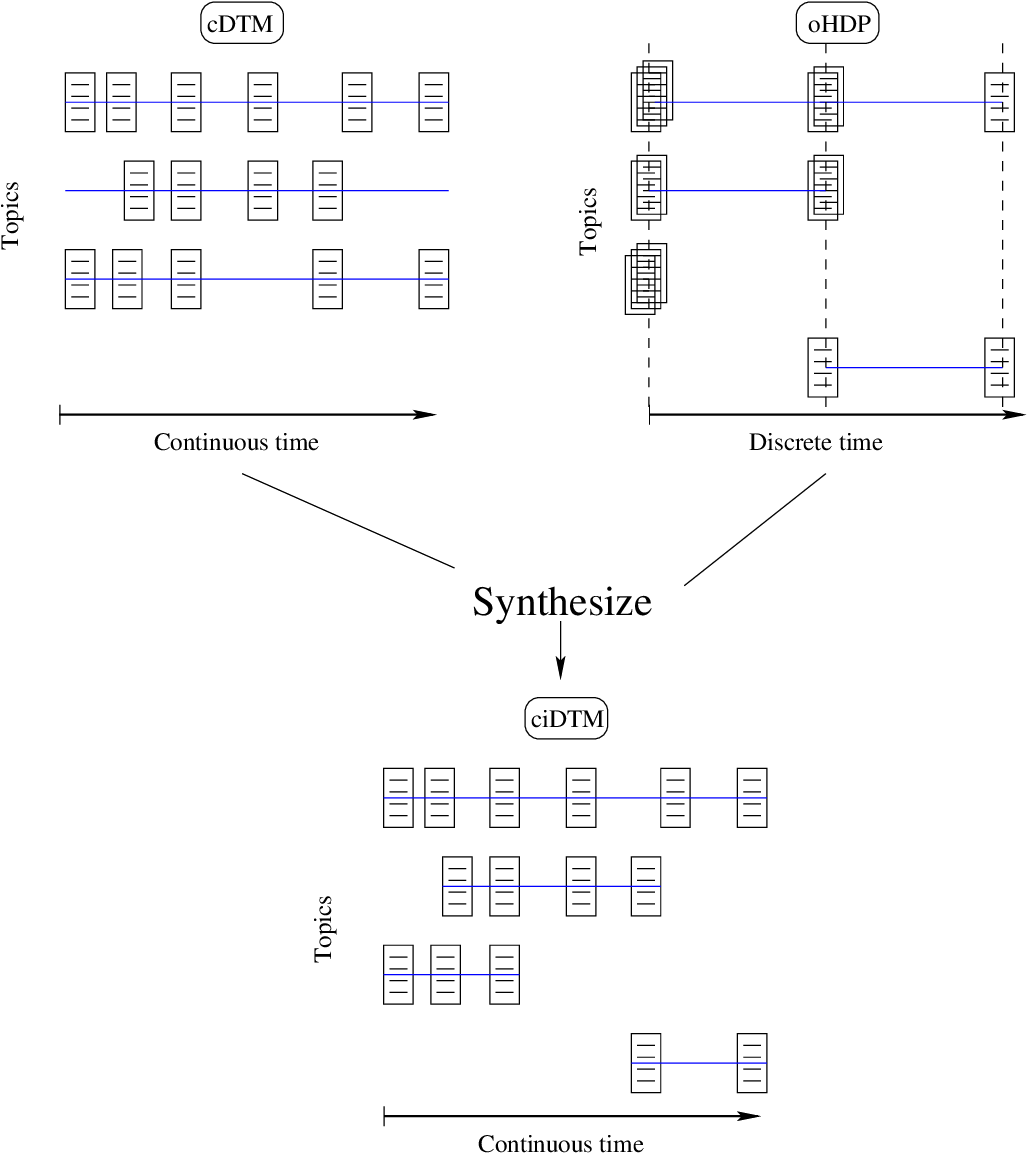 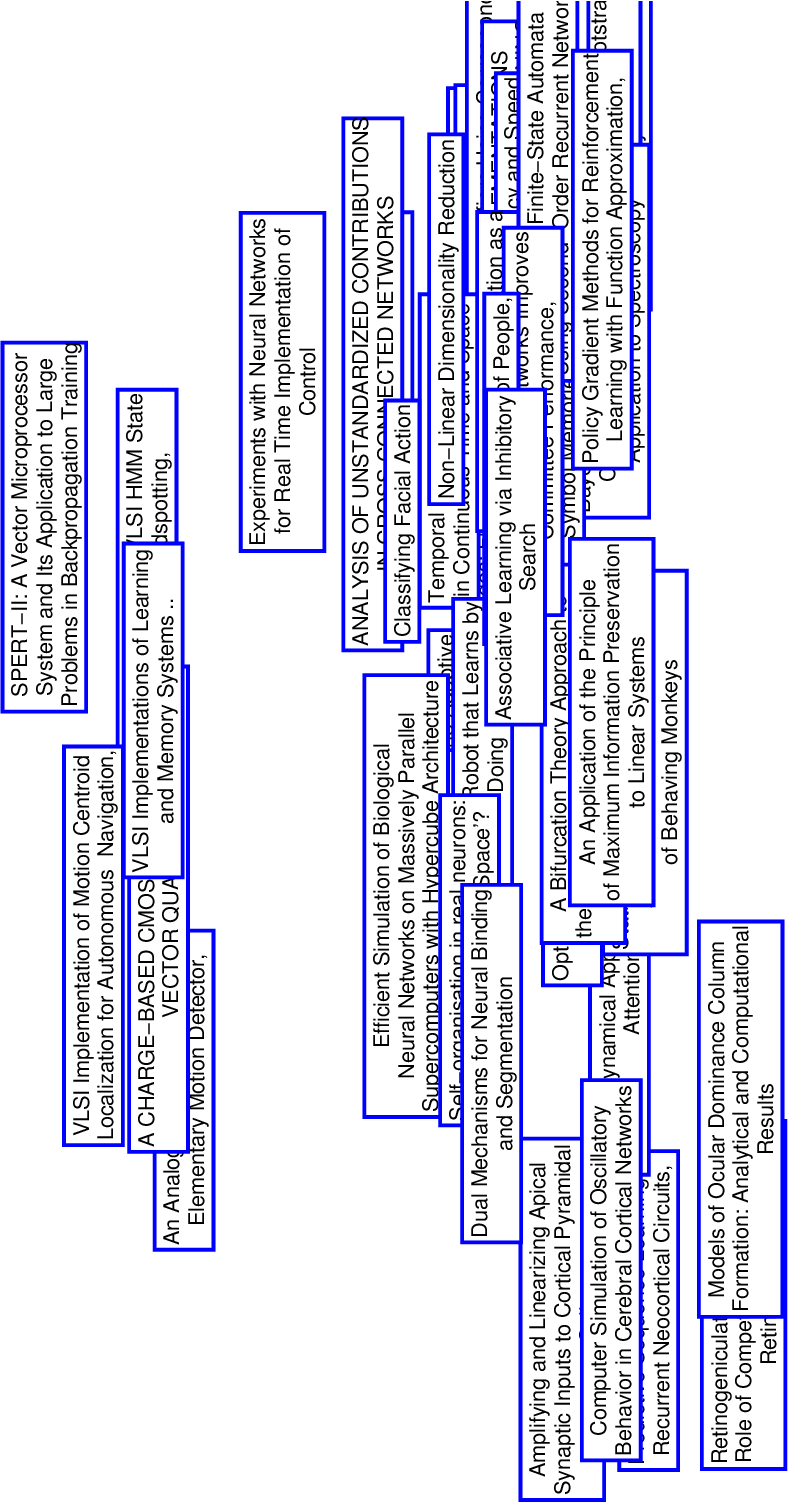 Topic models are probabilistic models for discovering topical themes in collections of documents. In real world applications, these models provide us with the means of organizing what would otherwise be unstructured collections. They can help us cluster a huge collection into different topics or find a subset of the collection that resembles the topical theme found in an article at hand. The first wave of topic models developed were able to discover the prevailing topics in a big collection of documents spanning a period of time. It was later realized that these time-invariant models were not capable of modeling 1) the time varying number of topics they discover and 2) the time changing structure of these topics. Few models were developed to address this two deficiencies. The online-hierarchical Dirichlet process models the documents with a time varying number of topics. It varies the structure of the topics over time as well. However, it relies on document order, not timestamps to evolve the model over time. The continuous-time dynamic topic model evolves topic structure in continuous-time. However, it uses a fixed number of topics over time. In this dissertation, I present a model, the continuous-time infinite dynamic topic model, that combines the advantages of these two models 1) the online-hierarchical Dirichlet process, and 2) the continuous-time dynamic topic model. More specifically, the model I present is a probabilistic topic model that does the following: 1) it changes the number of topics over continuous time, and 2) it changes the topic structure over continuous-time. I compared the model I developed with the two other models with different setting values. The results obtained were favorable to my model and showed the need for having a model that has a continuous-time varying number of topics and topic structure. 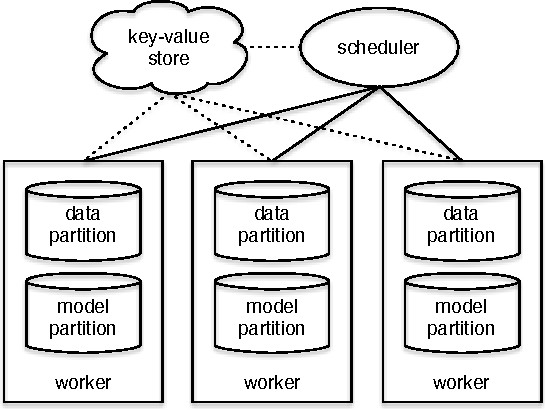 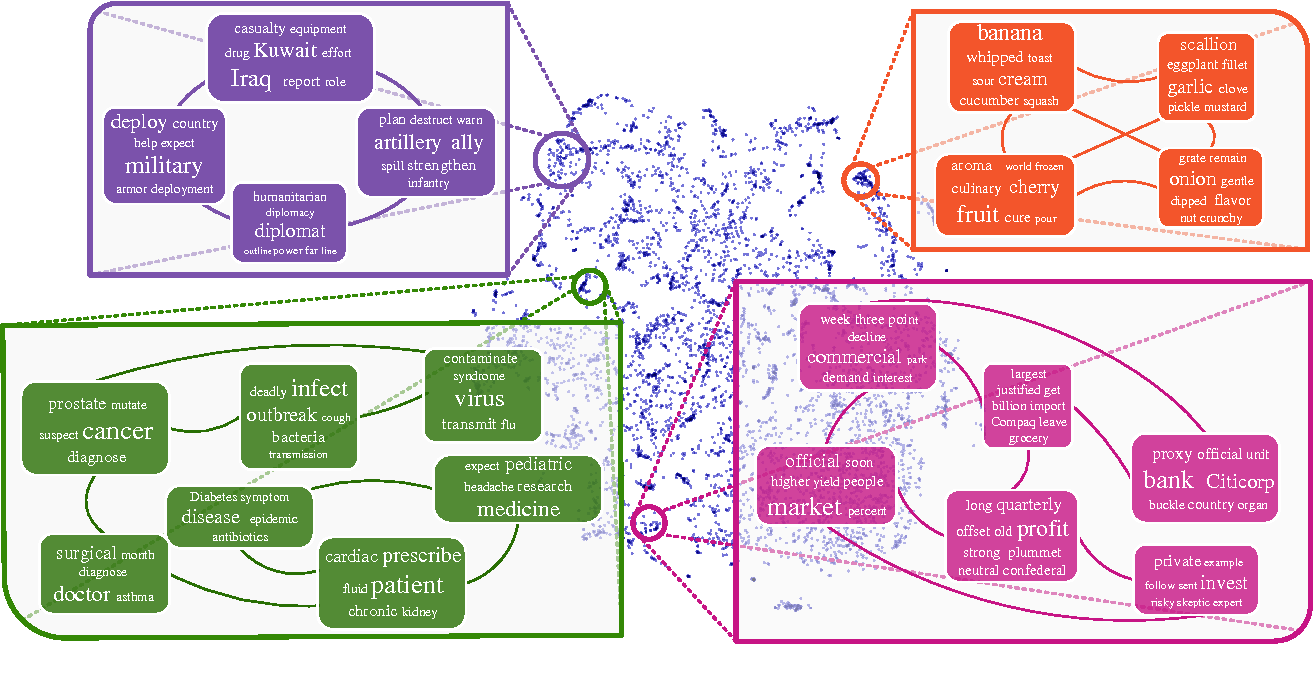 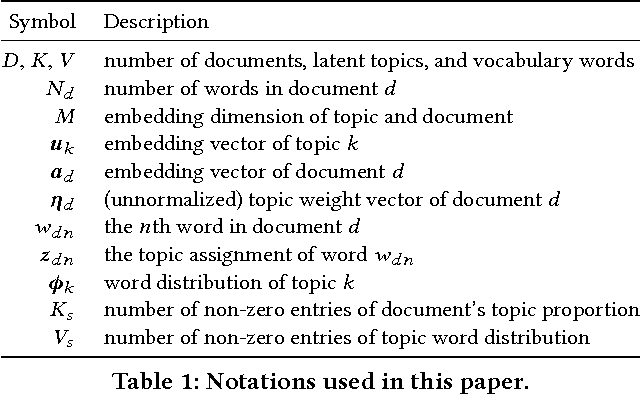 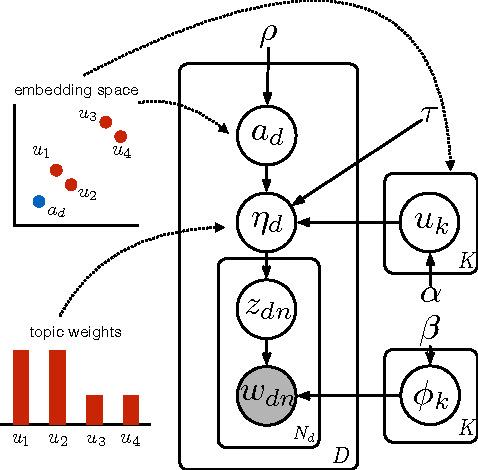 Correlated topic modeling has been limited to small model and problem sizes due to their high computational cost and poor scaling. In this paper, we propose a new model which learns compact topic embeddings and captures topic correlations through the closeness between the topic vectors. Our method enables efficient inference in the low-dimensional embedding space, reducing previous cubic or quadratic time complexity to linear w.r.t the topic size. We further speedup variational inference with a fast sampler to exploit sparsity of topic occurrence. Extensive experiments show that our approach is capable of handling model and data scales which are several orders of magnitude larger than existing correlation results, without sacrificing modeling quality by providing competitive or superior performance in document classification and retrieval.

A Coefficient of Determination for Probabilistic Topic Models 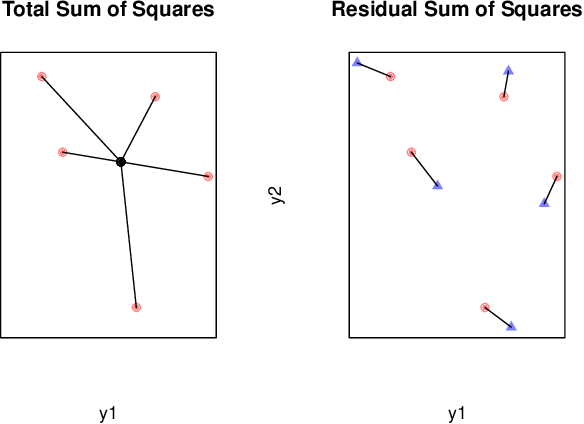 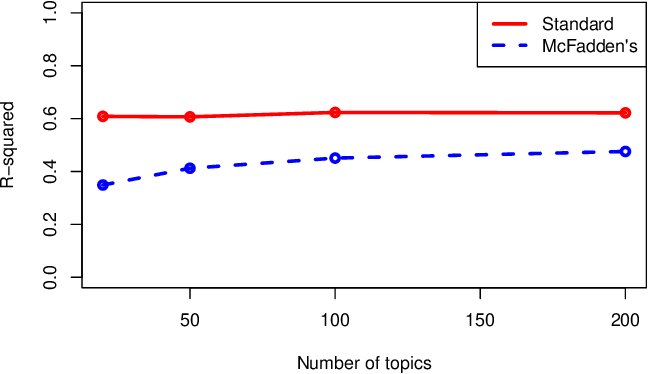 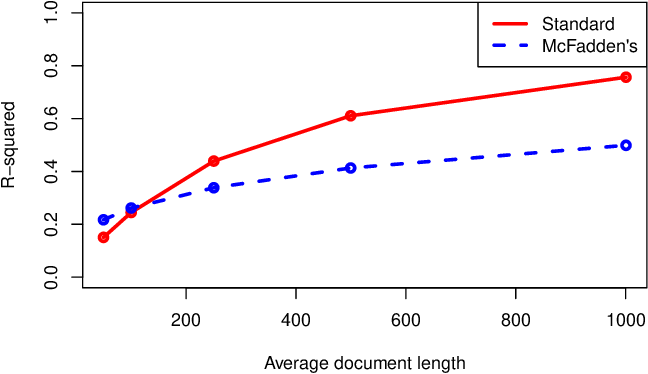 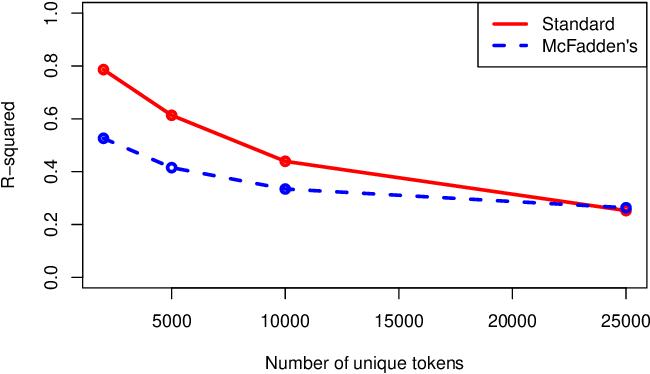 This research proposes a new (old) metric for evaluating goodness of fit in topic models, the coefficient of determination, or $R^2$. Within the context of topic modeling, $R^2$ has the same interpretation that it does when used in a broader class of statistical models. Reporting $R^2$ with topic models addresses two current problems in topic modeling: a lack of standard cross-contextual evaluation metrics for topic modeling and ease of communication with lay audiences. The author proposes that $R^2$ should be reported as a standard metric when constructing topic models.