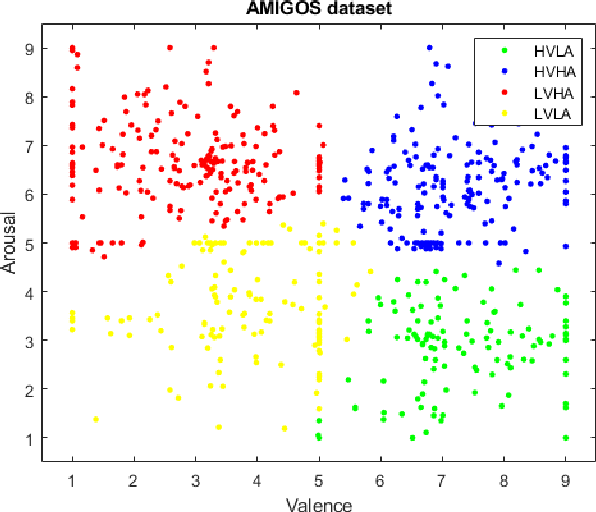 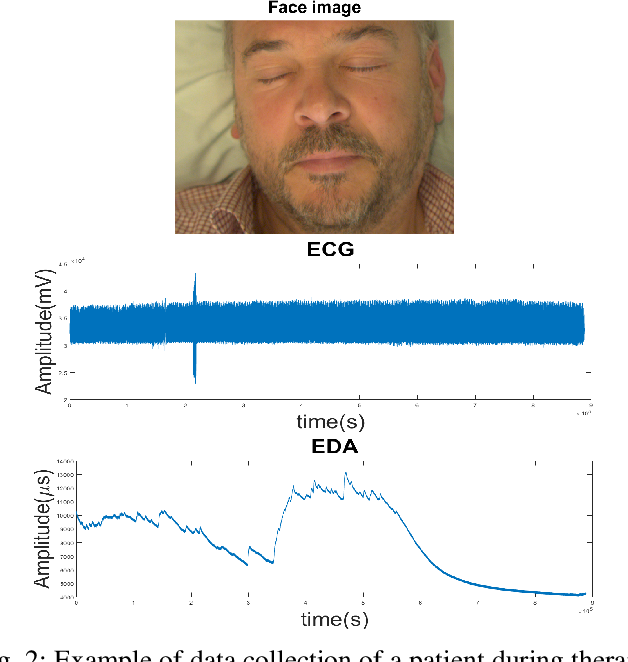 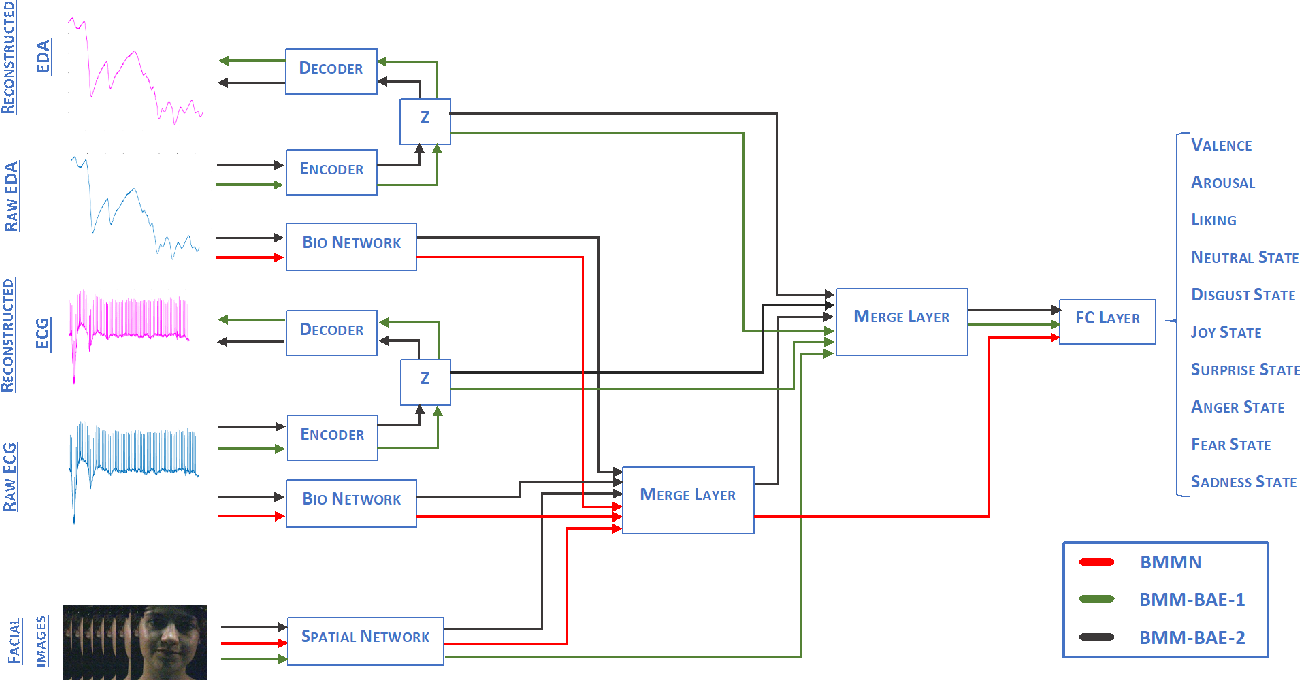 In recent years, Affective Computing and its applications have become a fast-growing research topic. Furthermore, the rise of Deep Learning has introduced significant improvements in the emotion recognition system compared to classical methods. In this work, we propose a multi-modal emotion recognition model based on deep learning techniques using the combination of peripheral physiological signals and facial expressions. Moreover, we present an improvement to proposed models by introducing latent features extracted from our internal Bio Auto-Encoder (BAE). Both models are trained and evaluated on AMIGOS datasets reporting valence, arousal, and emotion state classification. Finally, to demonstrate a possible medical application in affective computing using deep learning techniques, we applied the proposed method to the assessment of anxiety therapy. To this purpose, a reduced multi-modal database has been collected by recording facial expressions and peripheral signals such as Electrocardiogram (ECG) and Galvanic Skin Response (GSR) of each patient. Valence and arousal estimation was extracted using the proposed model from the beginning until the end of the therapy, with successful evaluation to the different emotional changes in the temporal domain. 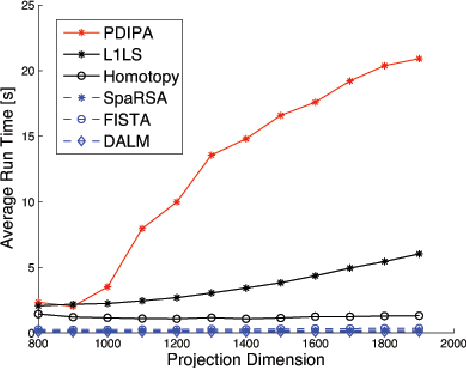 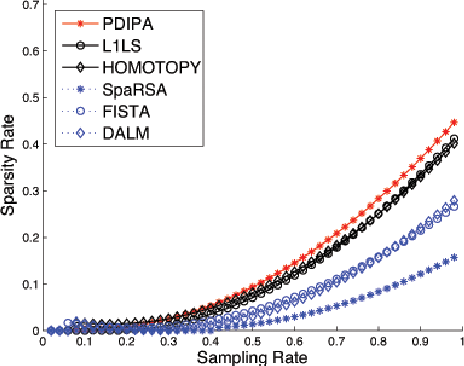 L1-minimization refers to finding the minimum L1-norm solution to an underdetermined linear system b=Ax. Under certain conditions as described in compressive sensing theory, the minimum L1-norm solution is also the sparsest solution. In this paper, our study addresses the speed and scalability of its algorithms. In particular, we focus on the numerical implementation of a sparsity-based classification framework in robust face recognition, where sparse representation is sought to recover human identities from very high-dimensional facial images that may be corrupted by illumination, facial disguise, and pose variation. Although the underlying numerical problem is a linear program, traditional algorithms are known to suffer poor scalability for large-scale applications. We investigate a new solution based on a classical convex optimization framework, known as Augmented Lagrangian Methods (ALM). The new convex solvers provide a viable solution to real-world, time-critical applications such as face recognition. We conduct extensive experiments to validate and compare the performance of the ALM algorithms against several popular L1-minimization solvers, including interior-point method, Homotopy, FISTA, SESOP-PCD, approximate message passing (AMP) and TFOCS. To aid peer evaluation, the code for all the algorithms has been made publicly available. 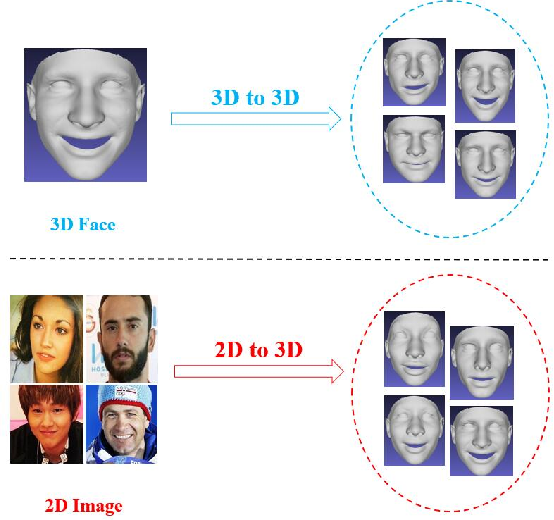 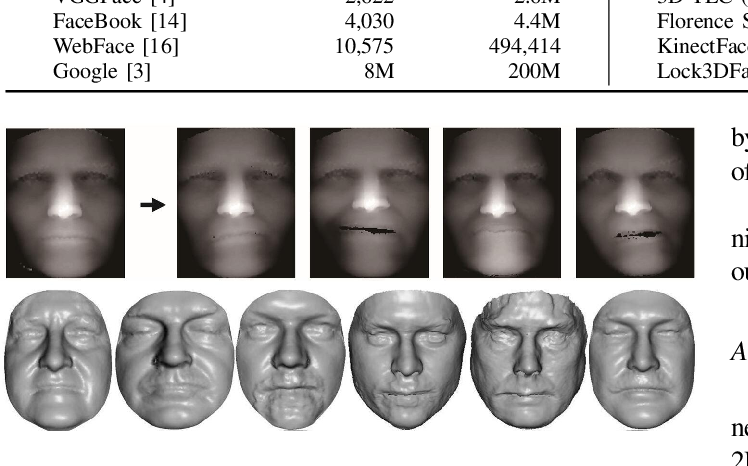 Deep learning methods have brought many breakthroughs to computer vision, especially in 2D face recognition. However, the bottleneck of deep learning based 3D face recognition is that it is difficult to collect millions of 3D faces, whether for industry or academia. In view of this situation, there are many methods to generate more 3D faces from existing 3D faces through 3D face data augmentation, which are used to train deep 3D face recognition models. However, to the best of our knowledge, there is no method to generate 3D faces from 2D face images for training deep 3D face recognition models. This letter focuses on the role of reconstructed 3D facial surfaces in 3D face identification and proposes a framework of 2D-aided deep 3D face identification. In particular, we propose to reconstruct millions of 3D face scans from a large scale 2D face database (i.e.VGGFace2), using a deep learning based 3D face reconstruction method (i.e.ExpNet). Then, we adopt a two-phase training approach: In the first phase, we use millions of face images to pre-train the deep convolutional neural network (DCNN), and in the second phase, we use normal component images (NCI) of reconstructed 3D face scans to train the DCNN. Extensive experimental results illustrate that the proposed approach can greatly improve the rank-1 score of 3D face identification on the FRGC v2.0, the Bosphorus, and the BU-3DFE 3D face databases, compared to the model trained by 2D face images. Finally, our proposed approach achieves state-of-the-art rank-1 scores on the FRGC v2.0 (97.6%), Bosphorus (98.4%), and BU-3DFE (98.8%) databases. The experimental results show that the reconstructed 3D facial surfaces are useful and our 2D-aided deep 3D face identification framework is meaningful, facing the scarcity of 3D faces. 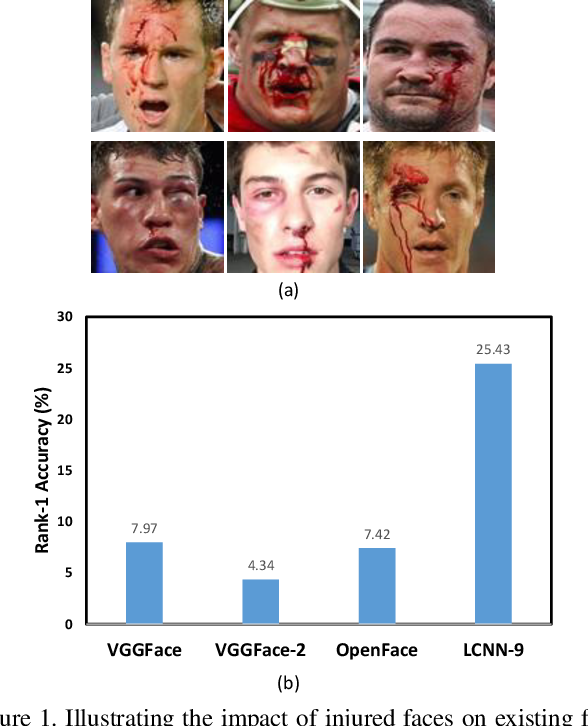 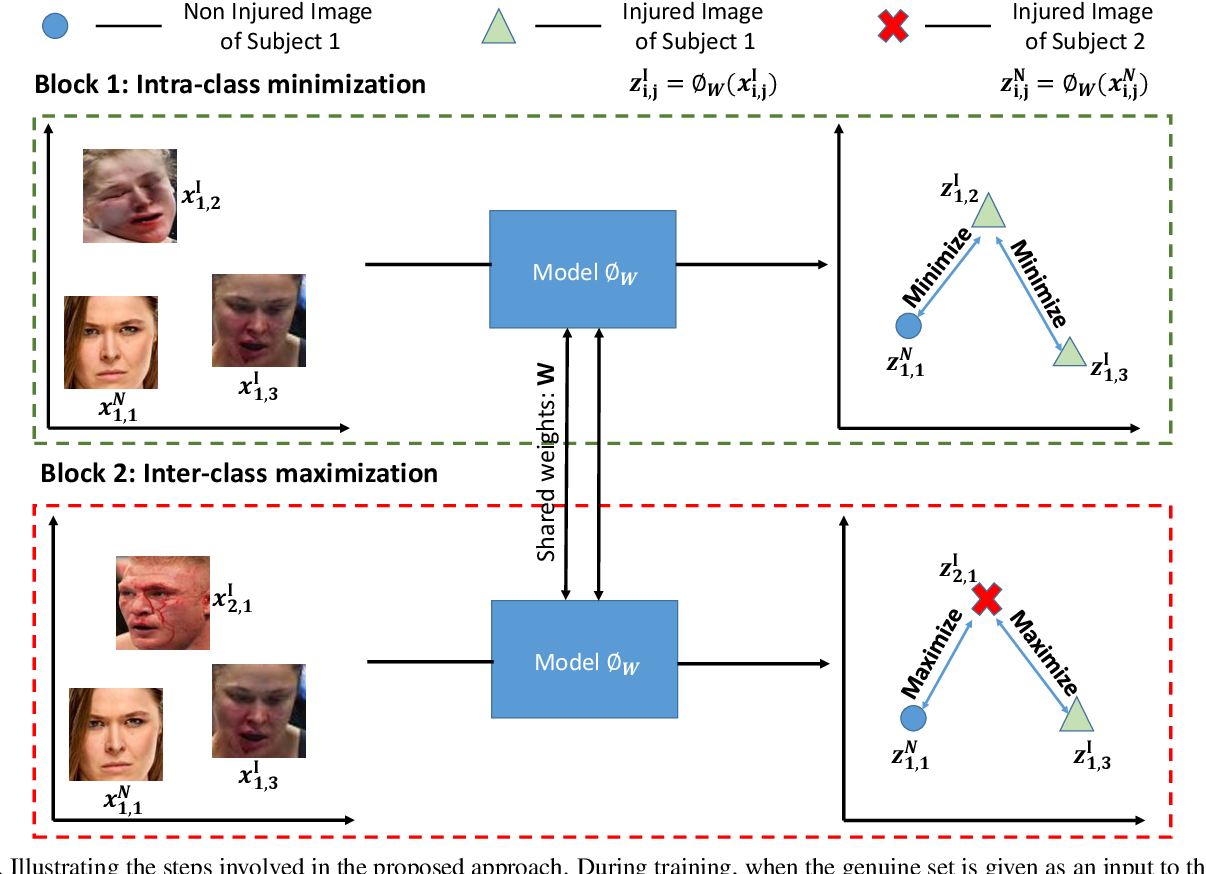 Deaths and injuries are common in road accidents, violence, and natural disaster. In such cases, one of the main tasks of responders is to retrieve the identity of the victims to reunite families and ensure proper identification of deceased/ injured individuals. Apart from this, identification of unidentified dead bodies due to violence and accidents is crucial for the police investigation. In the absence of identification cards, current practices for this task include DNA profiling and dental profiling. Face is one of the most commonly used and widely accepted biometric modalities for recognition. However, face recognition is challenging in the presence of facial injuries such as swelling, bruises, blood clots, laceration, and avulsion which affect the features used in recognition. In this paper, for the first time, we address the problem of injured face recognition and propose a novel Subclass Contrastive Loss (SCL) for this task. A novel database, termed as Injured Face (IF) database, is also created to instigate research in this direction. Experimental analysis shows that the proposed loss function surpasses existing algorithm for injured face recognition. 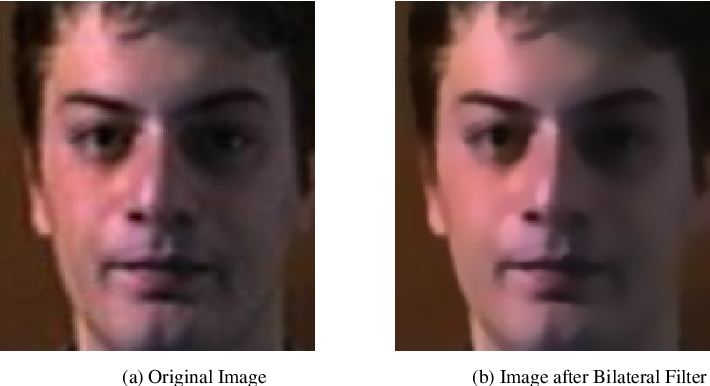 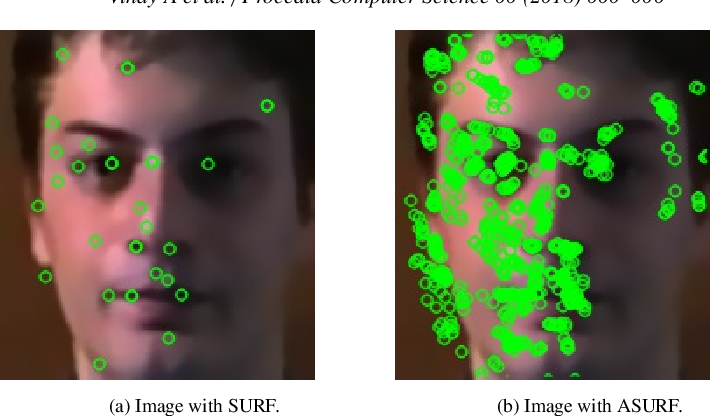 The paper posits a computationally-efficient algorithm for multi-class facial image classification in which images are constrained with translation, rotation, scale, color, illumination and affine distortion. The proposed method is divided into five main building blocks including Haar-Cascade for face detection, Bilateral Filter for image preprocessing to remove unwanted noise, Affine Speeded-Up Robust Features (ASURF) for keypoint detection and description, Vector of Locally Aggregated Descriptors (VLAD) for feature quantization and Cloud Forest for image classification. The proposed method aims at improving the accuracy and the time taken for face recognition systems. The usage of the Cloud Forest algorithm as a classifier on three benchmark datasets, namely the FACES95, FACES96 and ORL facial datasets, showed promising results. The proposed methodology using Cloud Forest algorithm successfully improves the recognition model by 2-12\% when differentiated against other ensemble techniques like the Random Forest classifier depending upon the dataset used. 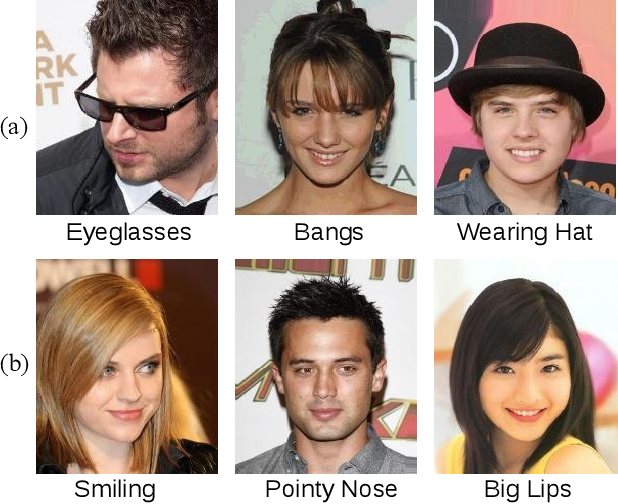 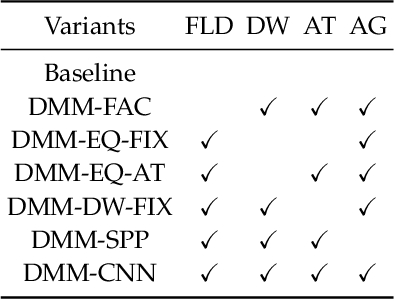 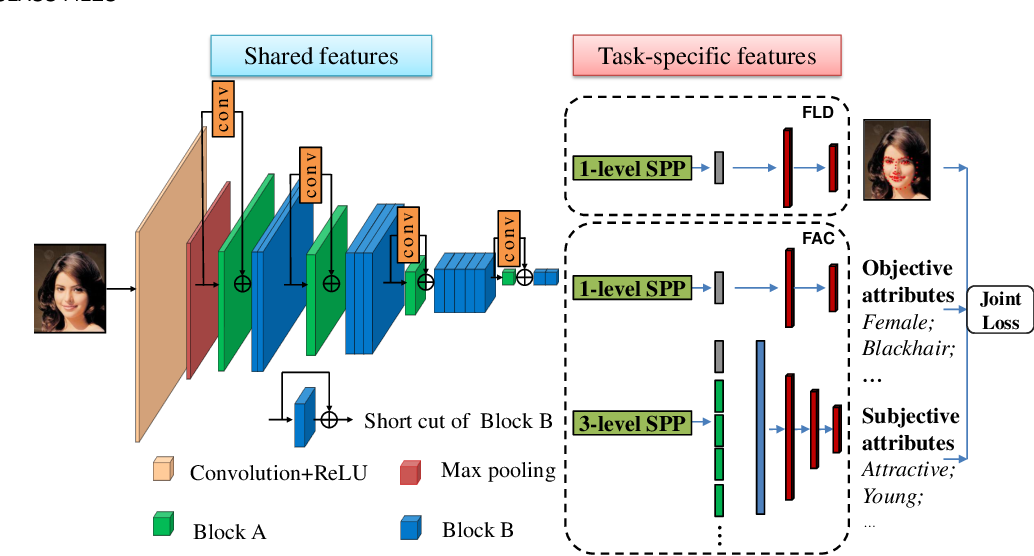 Facial Attribute Classification (FAC) has attracted increasing attention in computer vision and pattern recognition. However, state-of-the-art FAC methods perform face detection/alignment and FAC independently. The inherent dependencies between these tasks are not fully exploited. In addition, most methods predict all facial attributes using the same CNN network architecture, which ignores the different learning complexities of facial attributes. To address the above problems, we propose a novel deep multi-task multi-label CNN, termed DMM-CNN, for effective FAC. Specifically, DMM-CNN jointly optimizes two closely-related tasks (i.e., facial landmark detection and FAC) to improve the performance of FAC by taking advantage of multi-task learning. To deal with the diverse learning complexities of facial attributes, we divide the attributes into two groups: objective attributes and subjective attributes. Two different network architectures are respectively designed to extract features for two groups of attributes, and a novel dynamic weighting scheme is proposed to automatically assign the loss weight to each facial attribute during training. Furthermore, an adaptive thresholding strategy is developed to effectively alleviate the problem of class imbalance for multi-label learning. Experimental results on the challenging CelebA and LFWA datasets show the superiority of the proposed DMM-CNN method compared with several state-of-the-art FAC methods.

Automated face recognition and identification softwares are becoming part of our daily life; it finds its abode not only with Facebook's auto photo tagging, Apple's iPhoto, Google's Picasa, Microsoft's Kinect, but also in Homeland Security Department's dedicated biometric face detection systems. Most of these automatic face identification systems fail where the effects of aging come into the picture. Little work exists in the literature on the subject of face prediction that accounts for aging, which is a vital part of the computer face recognition systems. In recent years, individual face components' (e.g. eyes, nose, mouth) features based matching algorithms have emerged, but these approaches are still not efficient. Therefore, in this work we describe a Face Prediction Model (FPM), which predicts human face aging or growth related image variation using Principle Component Analysis (PCA) and Artificial Neural Network (ANN) learning techniques. The FPM captures the facial changes, which occur with human aging and predicts the facial image with a few years of gap with an acceptable accuracy of face matching from 76 to 86%. 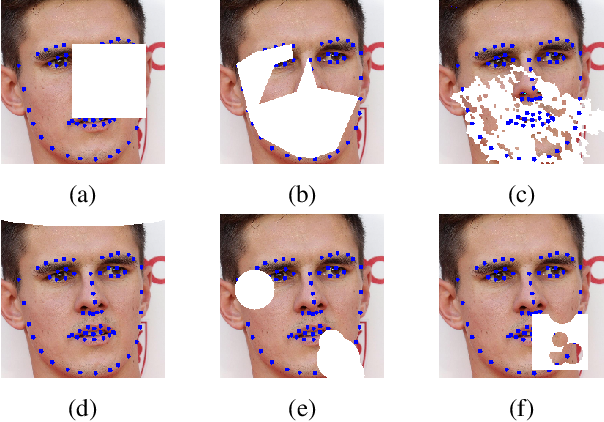 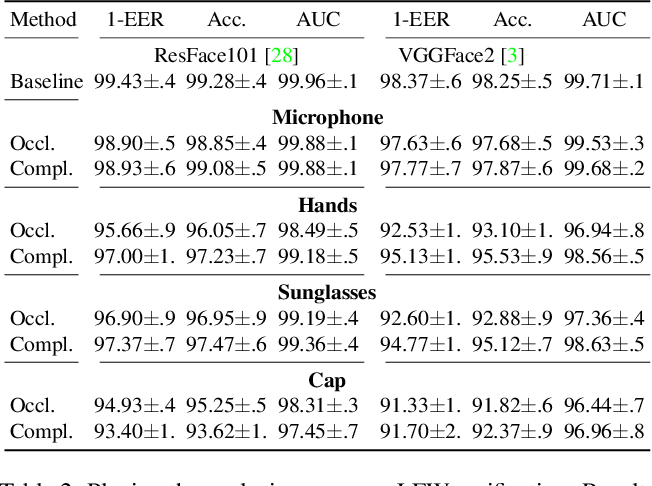 Face occlusions, covering either the majority or discriminative parts of the face, can break facial perception and produce a drastic loss of information. Biometric systems such as recent deep face recognition models are not immune to obstructions or other objects covering parts of the face. While most of the current face recognition methods are not optimized to handle occlusions, there have been a few attempts to improve robustness directly in the training stage. Unlike those, we propose to study the effect of generative face completion on the recognition. We offer a face completion encoder-decoder, based on a convolutional operator with a gating mechanism, trained with an ample set of face occlusions. To systematically evaluate the impact of realistic occlusions on recognition, we propose to play the occlusion game: we render 3D objects onto different face parts, providing precious knowledge of what the impact is of effectively removing those occlusions. Extensive experiments on the Labeled Faces in the Wild (LFW), and its more difficult variant LFW-BLUFR, testify that face completion is able to partially restore face perception in machine vision systems for improved recognition.


* In Proceedings Of IAPR International Conference On Biometrics 2019 (ICB'19)

Two approaches are proposed for cross-pose face recognition, one is based on the 3D reconstruction of facial components and the other is based on the deep Convolutional Neural Network (CNN). Unlike most 3D approaches that consider holistic faces, the proposed approach considers 3D facial components. It segments a 2D gallery face into components, reconstructs the 3D surface for each component, and recognizes a probe face by component features. The segmentation is based on the landmarks located by a hierarchical algorithm that combines the Faster R-CNN for face detection and the Reduced Tree Structured Model for landmark localization. The core part of the CNN-based approach is a revised VGG network. We study the performances with different settings on the training set, including the synthesized data from 3D reconstruction, the real-life data from an in-the-wild database, and both types of data combined. We investigate the performances of the network when it is employed as a classifier or designed as a feature extractor. The two recognition approaches and the fast landmark localization are evaluated in extensive experiments, and compared to stateof-the-art methods to demonstrate their efficacy.