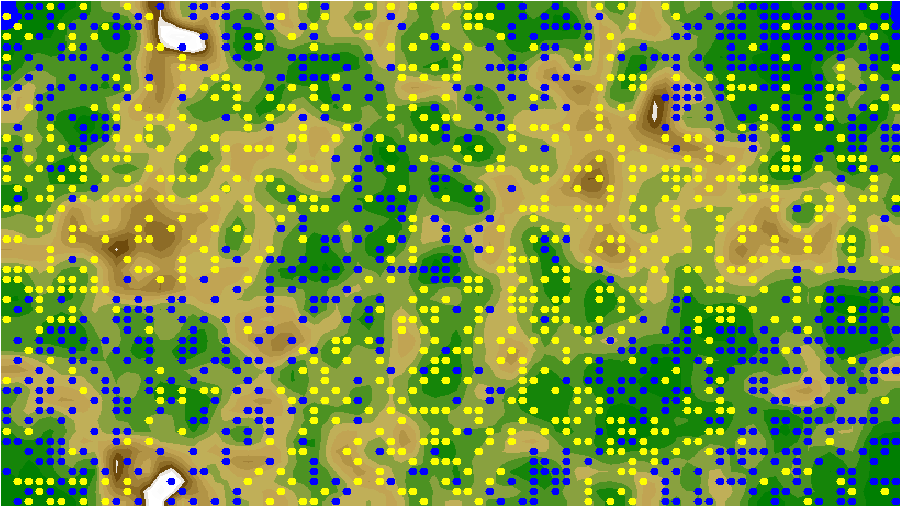 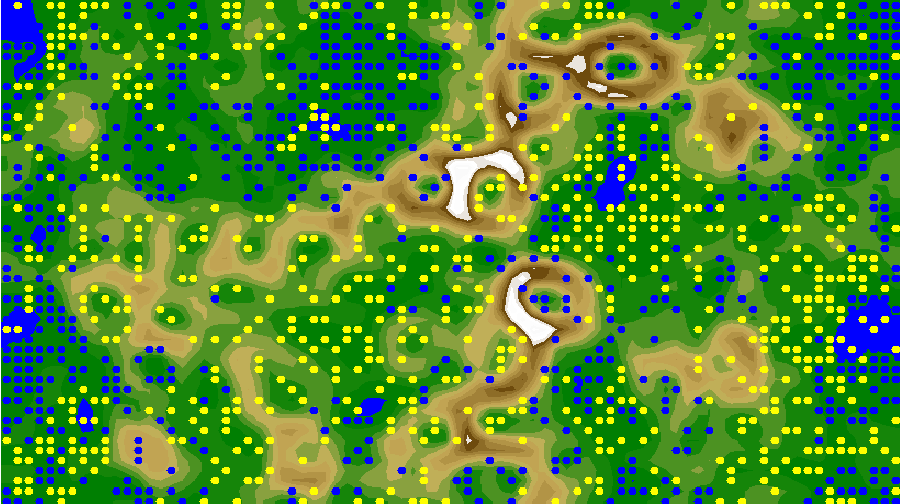 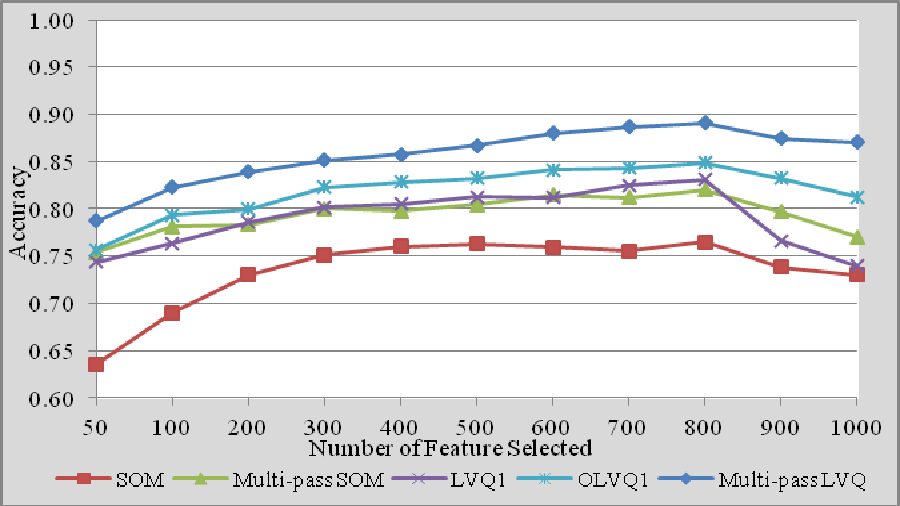 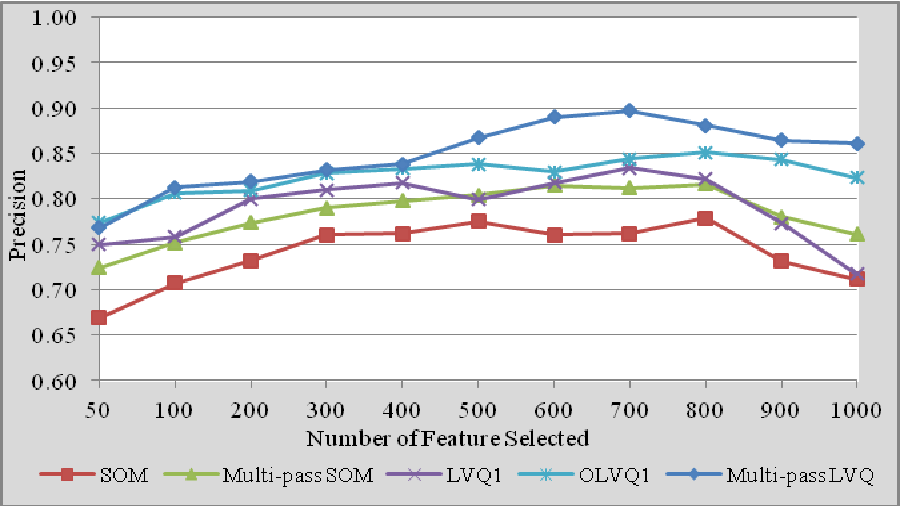 Web 2.0 services have enabled people to express their opinions, experience and feelings in the form of user-generated content. Sentiment analysis or opinion mining involves identifying, classifying and aggregating opinions as per their positive or negative polarity. This paper investigates the efficacy of different implementations of Self-Organizing Maps (SOM) for sentiment based visualization and classification of online reviews. Specifically, this paper implements the SOM algorithm for both supervised and unsupervised learning from text documents. The unsupervised SOM algorithm is implemented for sentiment based visualization and classification tasks. For supervised sentiment analysis, a competitive learning algorithm known as Learning Vector Quantization is used. Both algorithms are also compared with their respective multi-pass implementations where a quick rough ordering pass is followed by a fine tuning pass. The experimental results on the online movie review data set show that SOMs are well suited for sentiment based classification and sentiment polarity visualization. 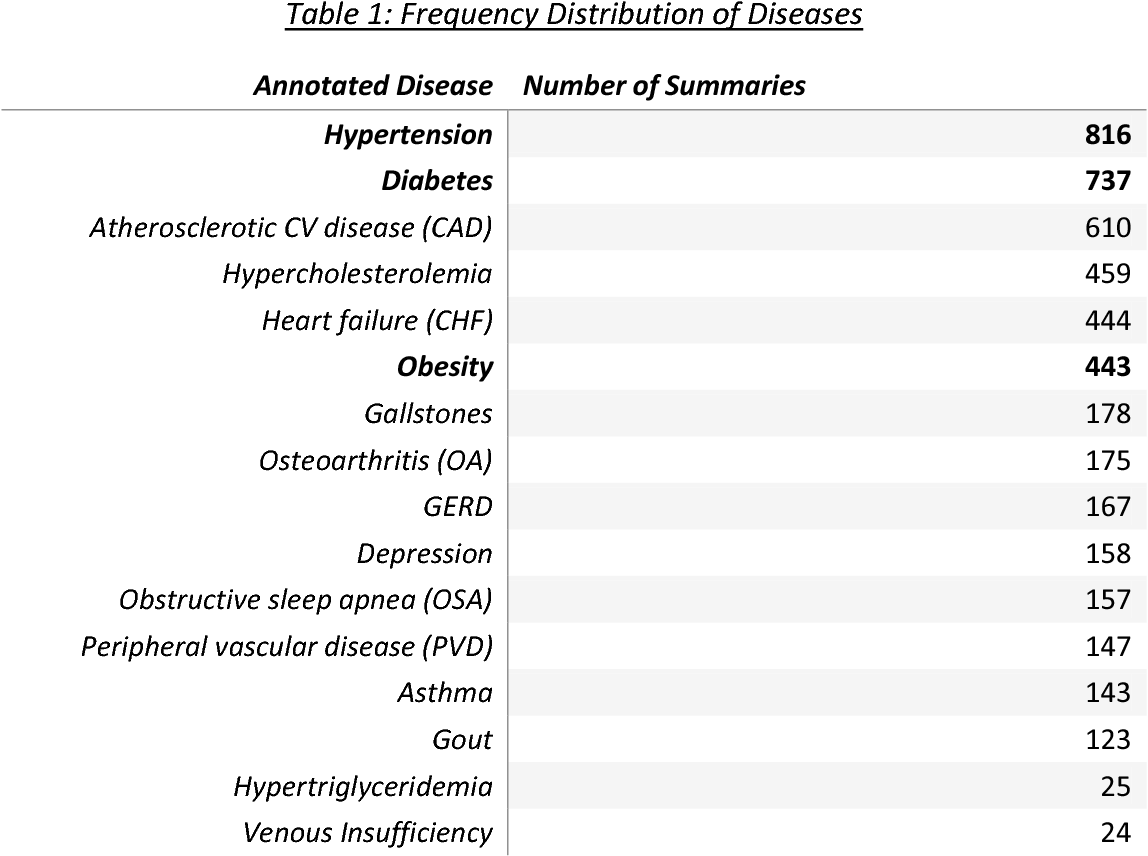 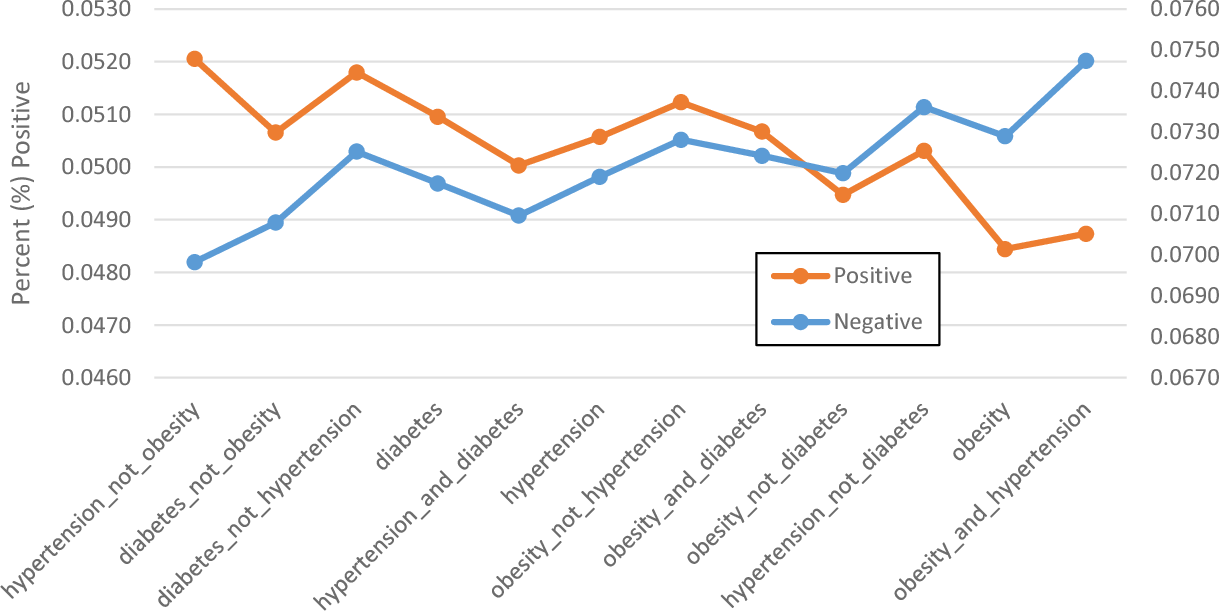 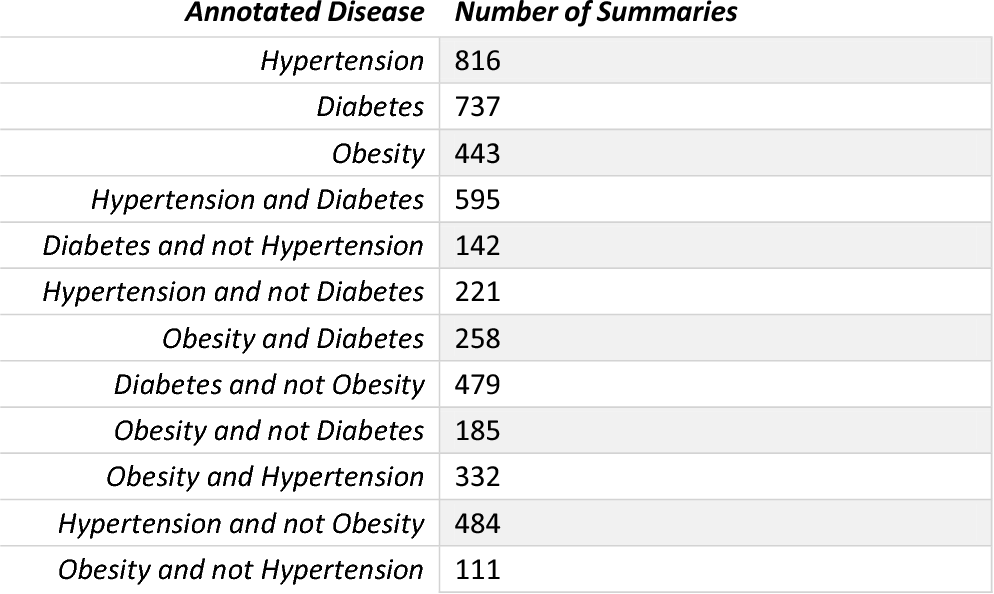 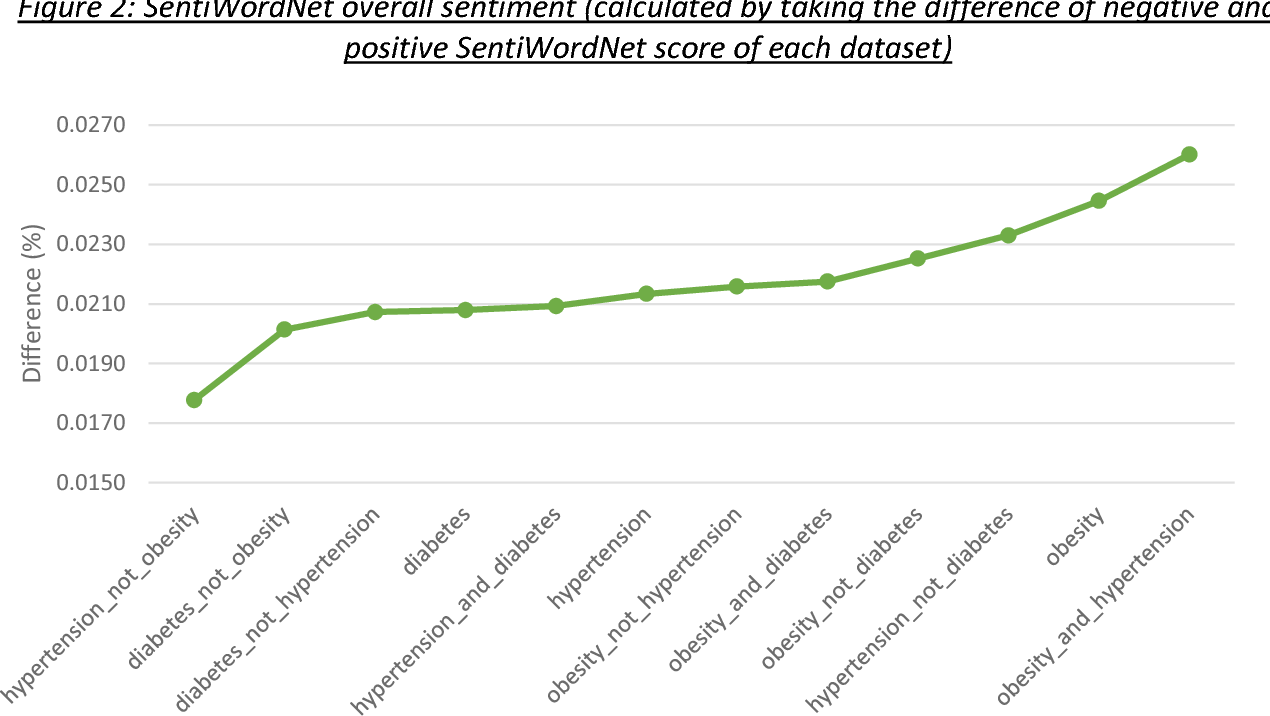 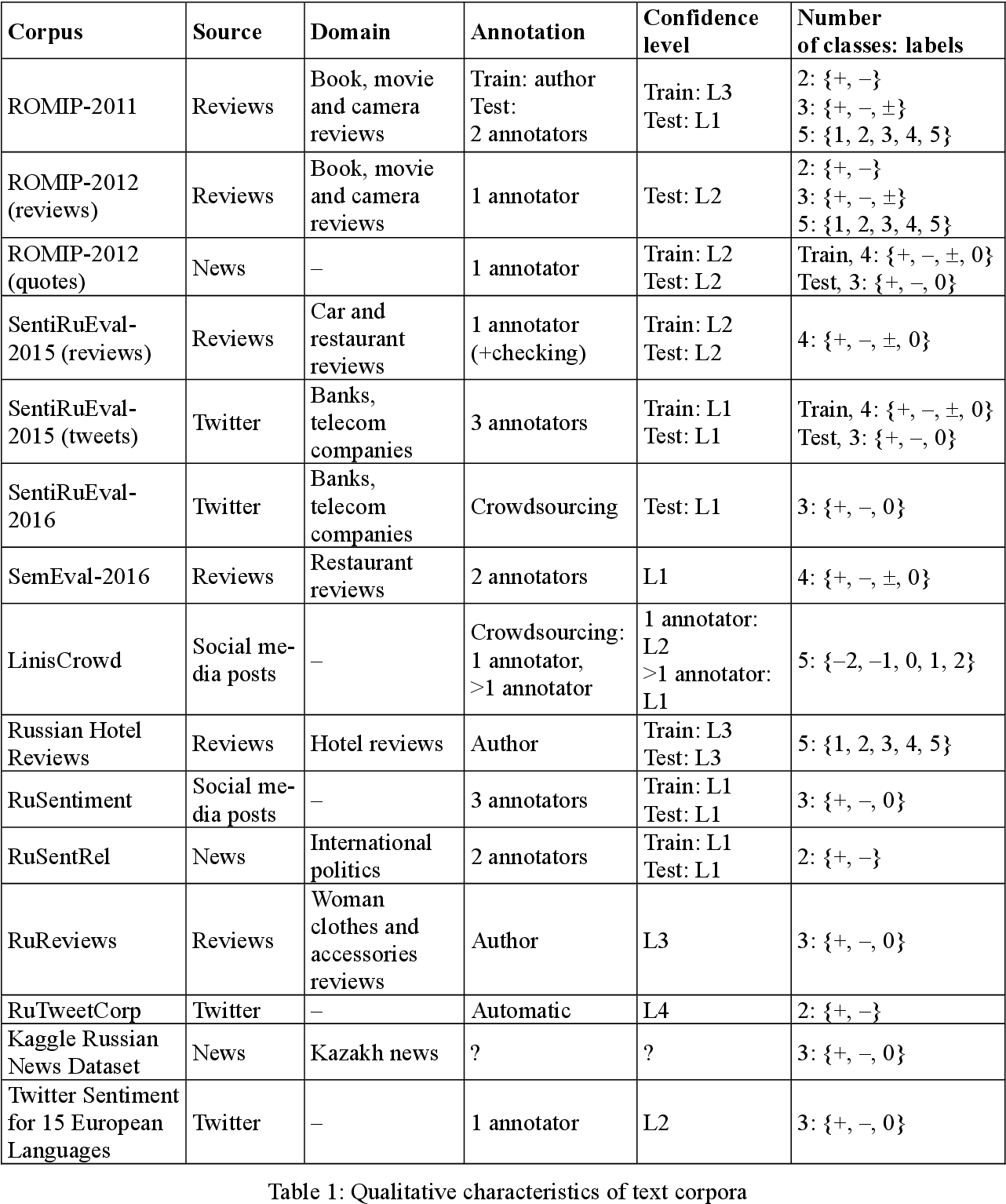 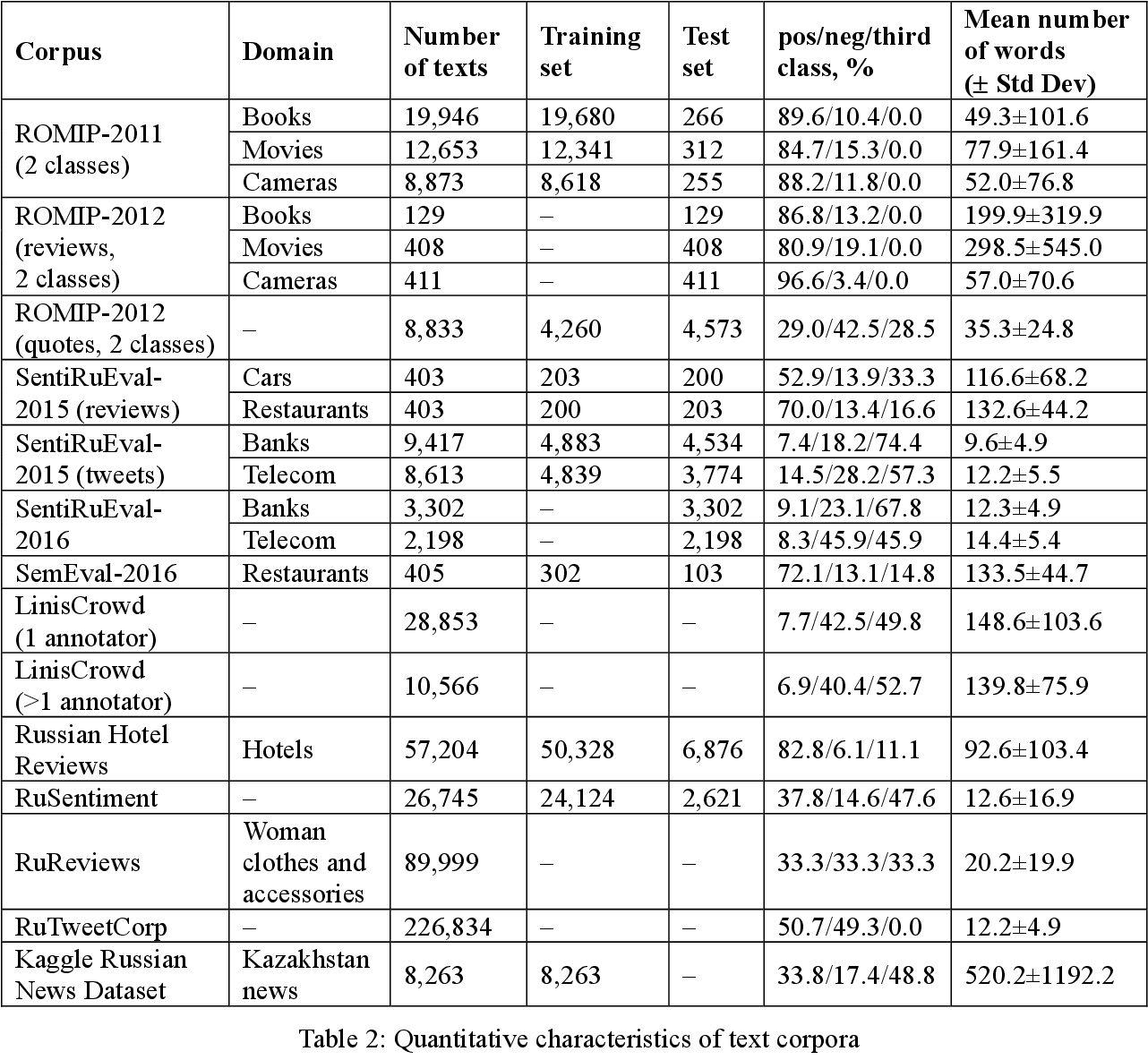 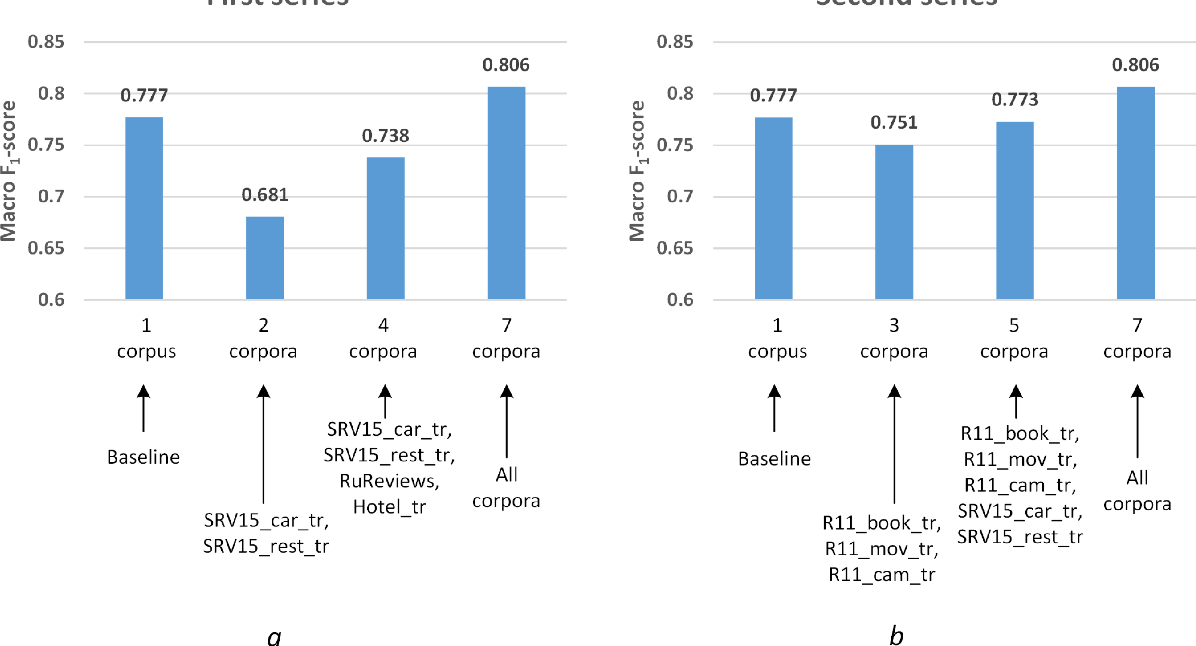 Currently, there are more than a dozen Russian-language corpora for sentiment analysis, differing in the source of the texts, domain, size, number and ratio of sentiment classes, and annotation method. This work examines publicly available Russian-language corpora, presents their qualitative and quantitative characteristics, which make it possible to get an idea of the current landscape of the corpora for sentiment analysis. The ranking of corpora by annotation quality is proposed, which can be useful when choosing corpora for training and testing. The influence of the training dataset on the performance of sentiment analysis is investigated based on the use of the deep neural network model BERT. The experiments with review corpora allow us to conclude that on average the quality of models increases with an increase in the number of training corpora. For the first time, quality scores were obtained for the corpus of reviews of ROMIP seminars based on the BERT model. Also, the study proposes the task of the building a universal model for sentiment analysis. 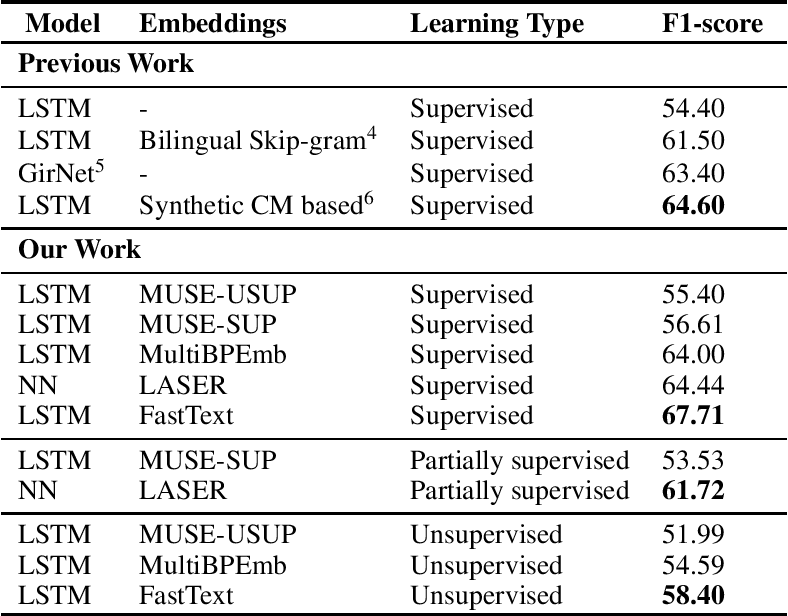 Code-mixing is the practice of alternating between two or more languages. Mostly observed in multilingual societies, its occurrence is increasing and therefore its importance. A major part of sentiment analysis research has been monolingual, and most of them perform poorly on code-mixed text. In this work, we introduce methods that use different kinds of multilingual and cross-lingual embeddings to efficiently transfer knowledge from monolingual text to code-mixed text for sentiment analysis of code-mixed text. Our methods can handle code-mixed text through a zero-shot learning. Our methods beat state-of-the-art on English-Spanish code-mixed sentiment analysis by absolute 3\% F1-score. We are able to achieve 0.58 F1-score (without parallel corpus) and 0.62 F1-score (with parallel corpus) on the same benchmark in a zero-shot way as compared to 0.68 F1-score in supervised settings. Our code is publicly available. 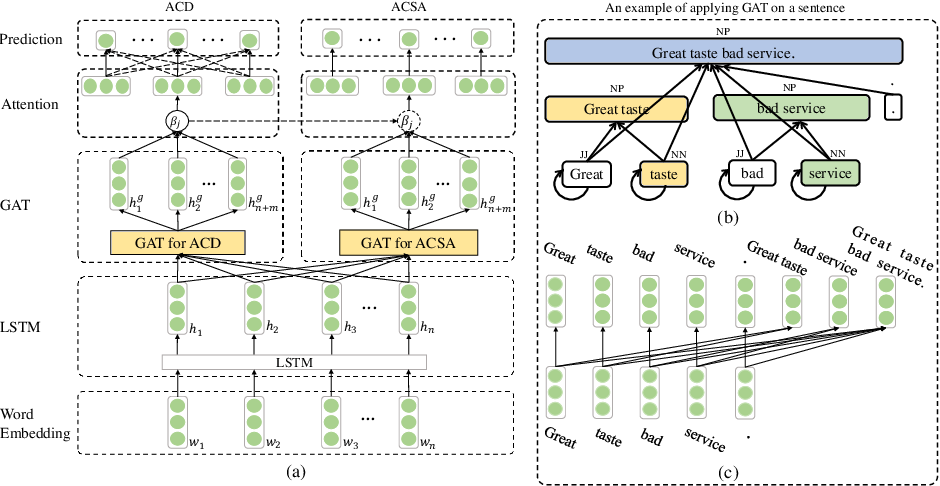 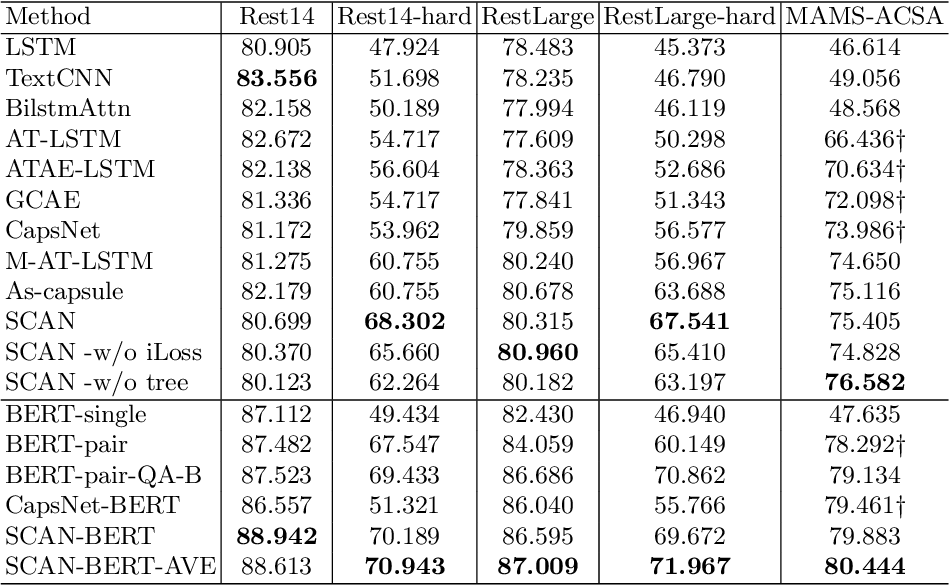 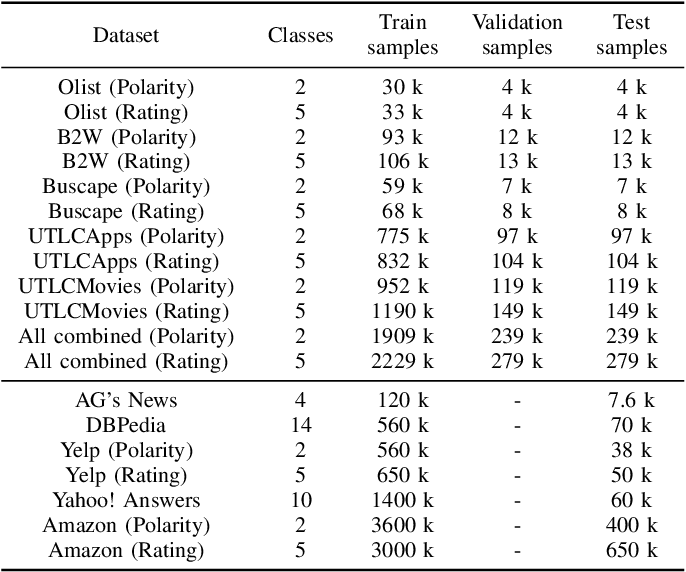 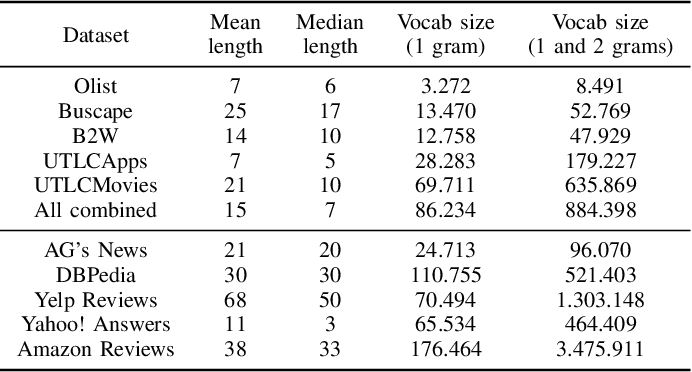 Sentiment Analysis is one of the most classical and primarily studied natural language processing tasks. This problem had a notable advance with the proposition of more complex and scalable machine learning models. Despite this progress, the Brazilian Portuguese language still disposes only of limited linguistic resources, such as datasets dedicated to sentiment classification, especially when considering the existence of predefined partitions in training, testing, and validation sets that would allow a more fair comparison of different algorithm alternatives. Motivated by these issues, this work analyzes the predictive performance of a range of document embedding strategies, assuming the polarity as the system outcome. This analysis includes five sentiment analysis datasets in Brazilian Portuguese, unified in a single dataset, and a reference partitioning in training, testing, and validation sets, both made publicly available through a digital repository. A cross-evaluation of dataset-specific models over different contexts is conducted to evaluate their generalization capabilities and the feasibility of adopting a unique model for addressing all scenarios.


* 6 pages, 2 figures, 6 tables. Accepted and presented at IEEE Latin American Conference on Computational Intelligence (LA-CCI 2021), but not yet published

Multimodal Sentiment Analysis To Explore the Structure of Emotions 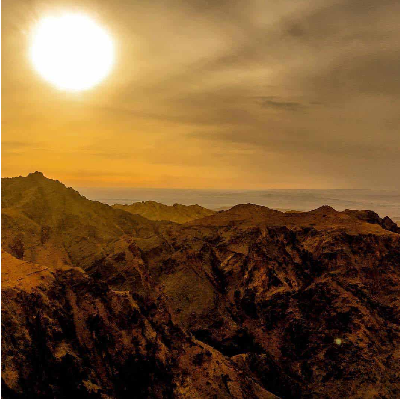 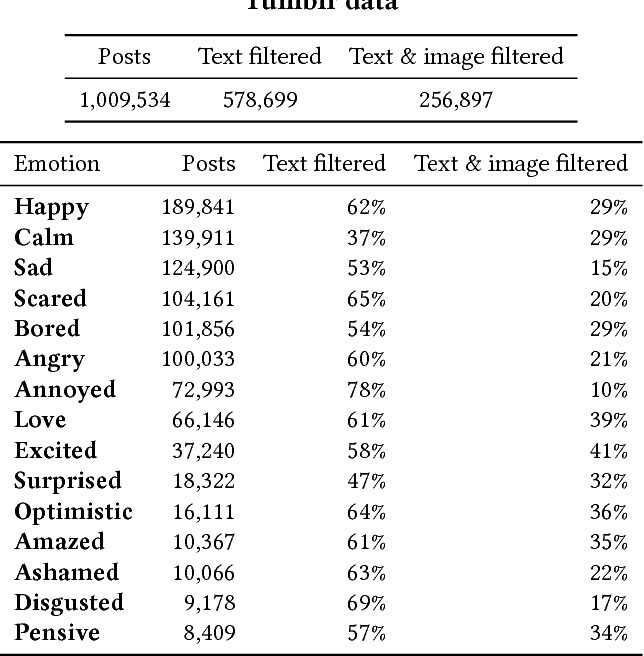 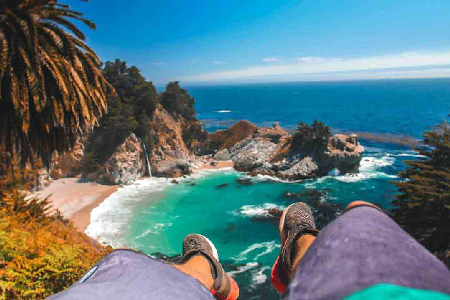 We propose a novel approach to multimodal sentiment analysis using deep neural networks combining visual analysis and natural language processing. Our goal is different than the standard sentiment analysis goal of predicting whether a sentence expresses positive or negative sentiment; instead, we aim to infer the latent emotional state of the user. Thus, we focus on predicting the emotion word tags attached by users to their Tumblr posts, treating these as "self-reported emotions." We demonstrate that our multimodal model combining both text and image features outperforms separate models based solely on either images or text. Our model's results are interpretable, automatically yielding sensible word lists associated with emotions. We explore the structure of emotions implied by our model and compare it to what has been posited in the psychology literature, and validate our model on a set of images that have been used in psychology studies. Finally, our work also provides a useful tool for the growing academic study of images - both photographs and memes - on social networks. 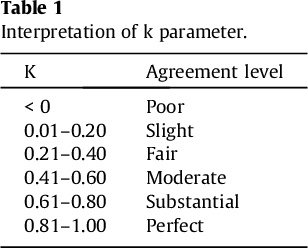 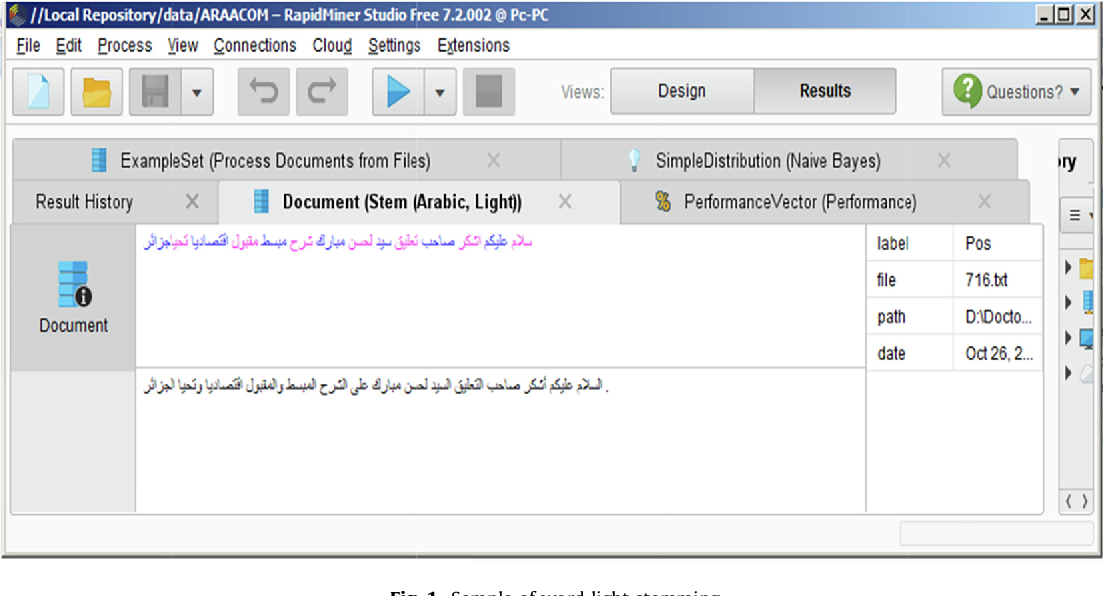 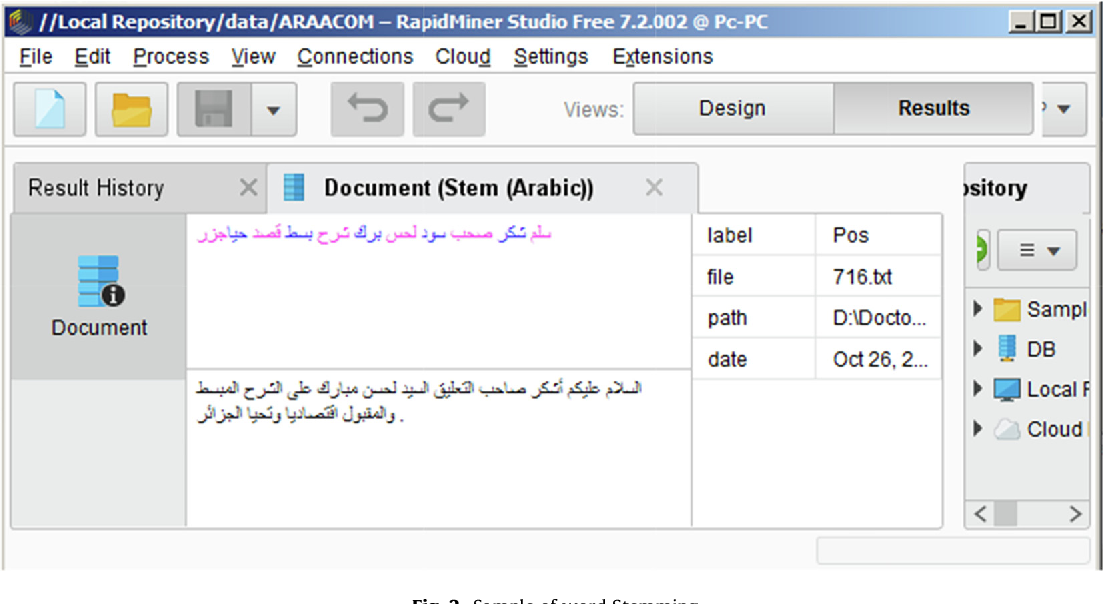 It is very current in today life to seek for tracking the people opinion from their interaction with occurring events. A very common way to do that is comments in articles published in newspapers web sites dealing with contemporary events. Sentiment analysis or opinion mining is an emergent field who is the purpose is finding the behind phenomenon masked in opinionated texts. We are interested in our work by comments in Algerian newspaper websites. For this end, two corpora were used SANA and OCA. SANA corpus is created by collection of comments from three Algerian newspapers, and annotated by two Algerian Arabic native speakers, while OCA is a freely available corpus for sentiment analysis. For the classification we adopt Supports vector machines, naive Bayes and knearest neighbors. Obtained results are very promising and show the different effects of stemming in such domain, also knearest neighbors give important improvement comparing to other classifiers unlike similar works where SVM is the most dominant. From this study we observe the importance of dedicated resources and methods the newspaper comments sentiment analysis which we look forward in future works. 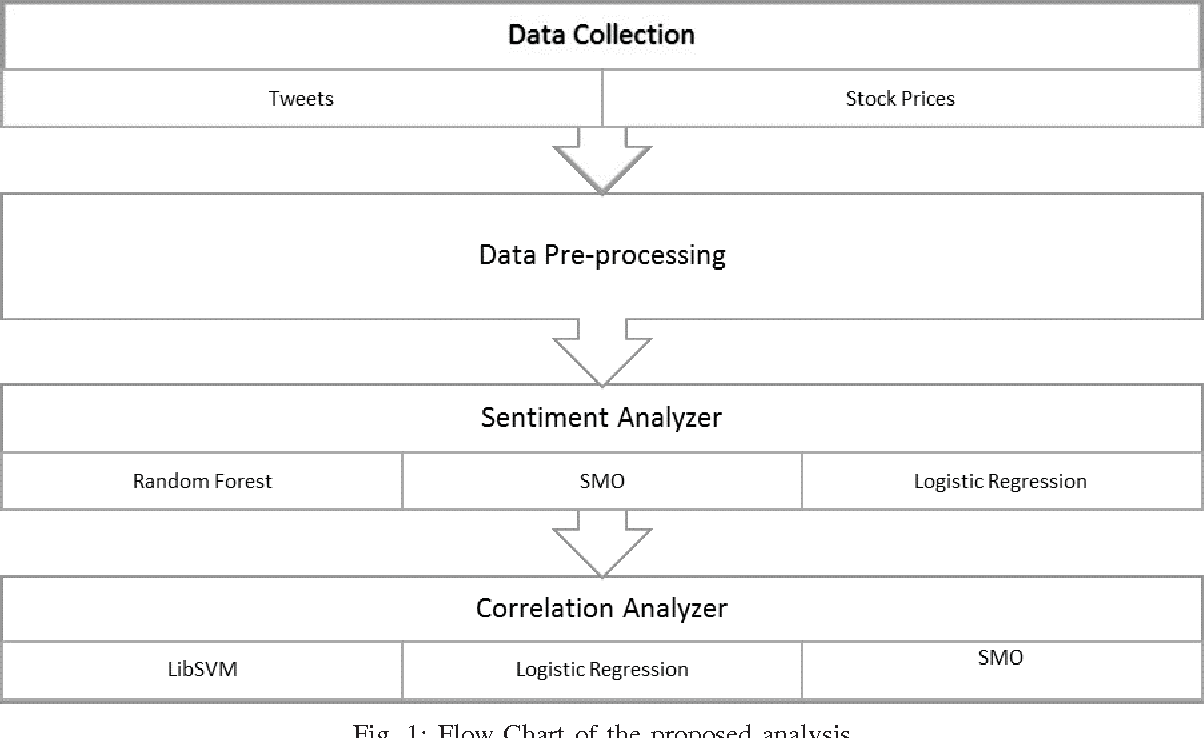