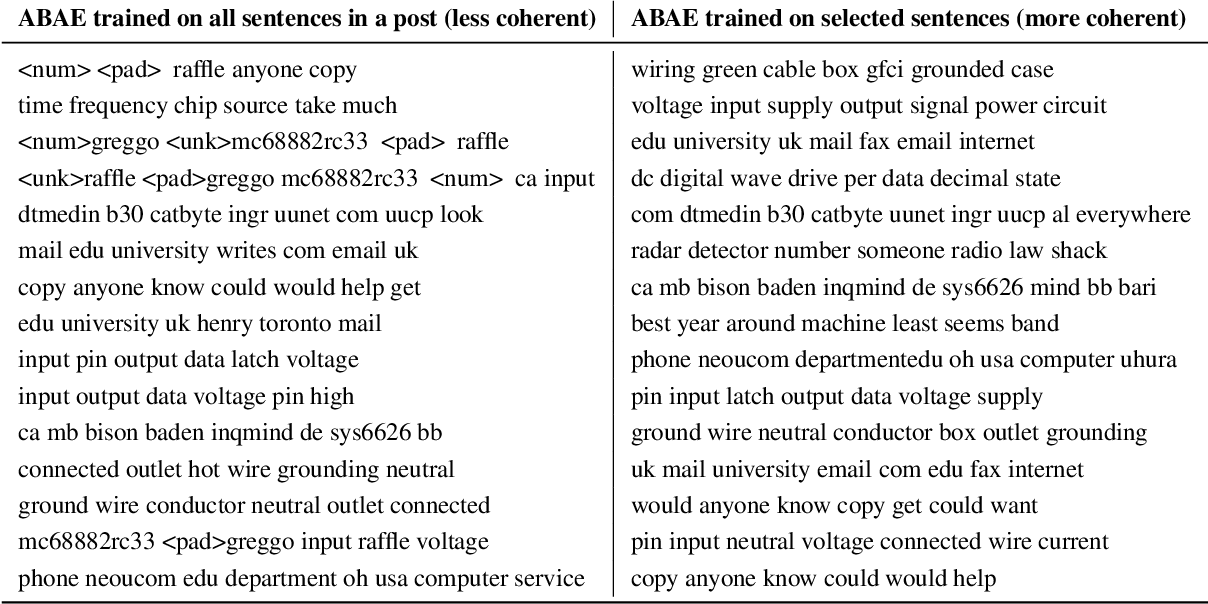 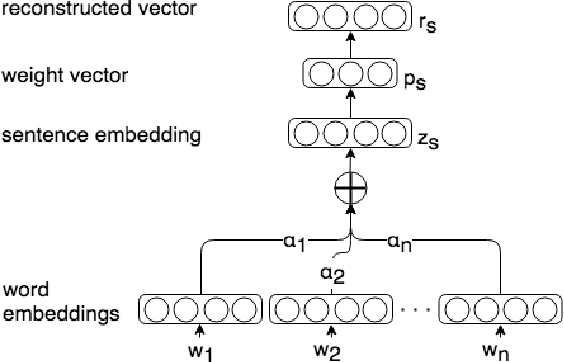 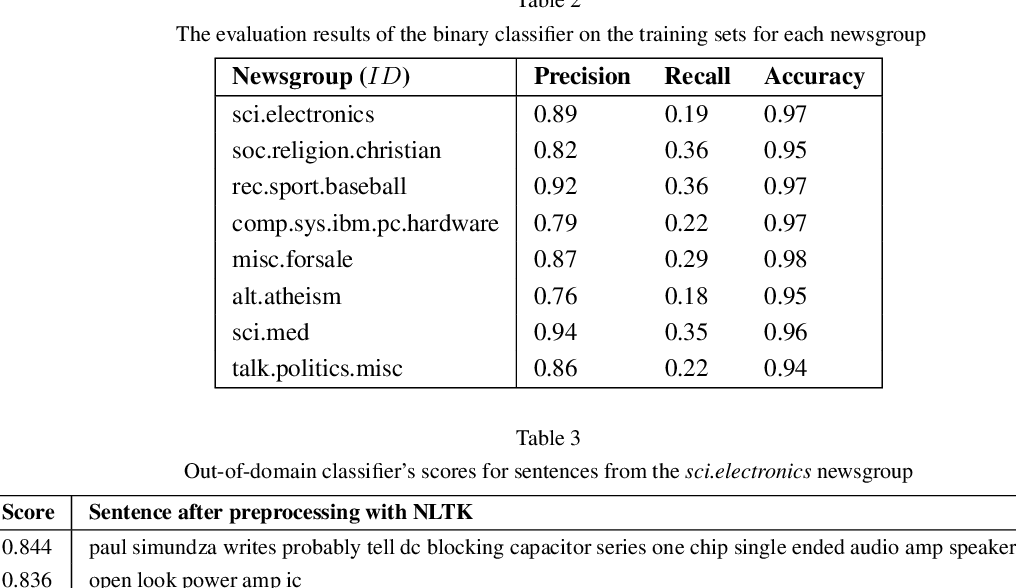 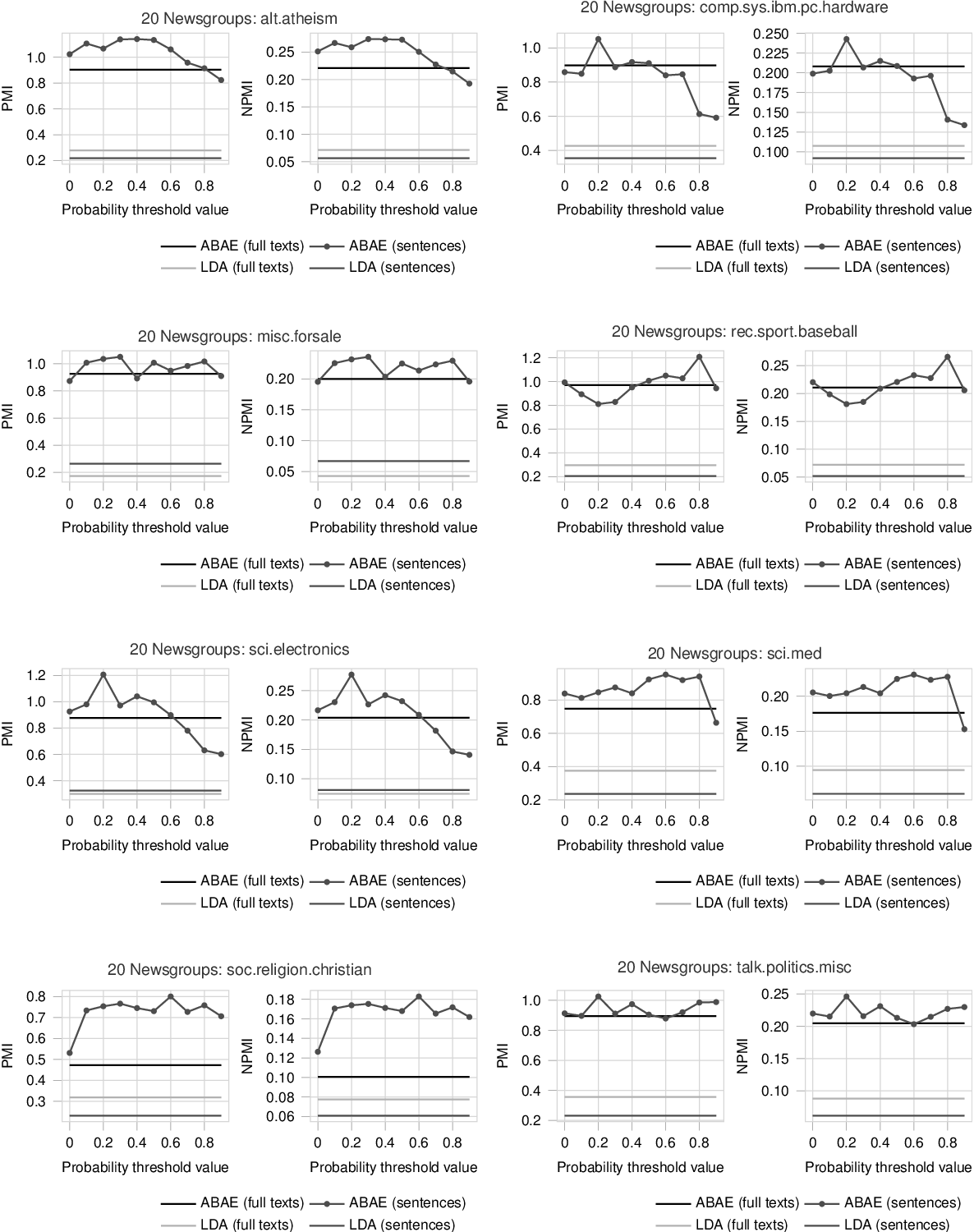 Deep learning architectures based on self-attention have recently achieved and surpassed state of the art results in the task of unsupervised aspect extraction and topic modeling. While models such as neural attention-based aspect extraction (ABAE) have been successfully applied to user-generated texts, they are less coherent when applied to traditional data sources such as news articles and newsgroup documents. In this work, we introduce a simple approach based on sentence filtering in order to improve topical aspects learned from newsgroups-based content without modifying the basic mechanism of ABAE. We train a probabilistic classifier to distinguish between out-of-domain texts (outer dataset) and in-domain texts (target dataset). Then, during data preparation we filter out sentences that have a low probability of being in-domain and train the neural model on the remaining sentences. The positive effect of sentence filtering on topic coherence is demonstrated in comparison to aspect extraction models trained on unfiltered texts.

Probable convexity and its application to Correlated Topic Models 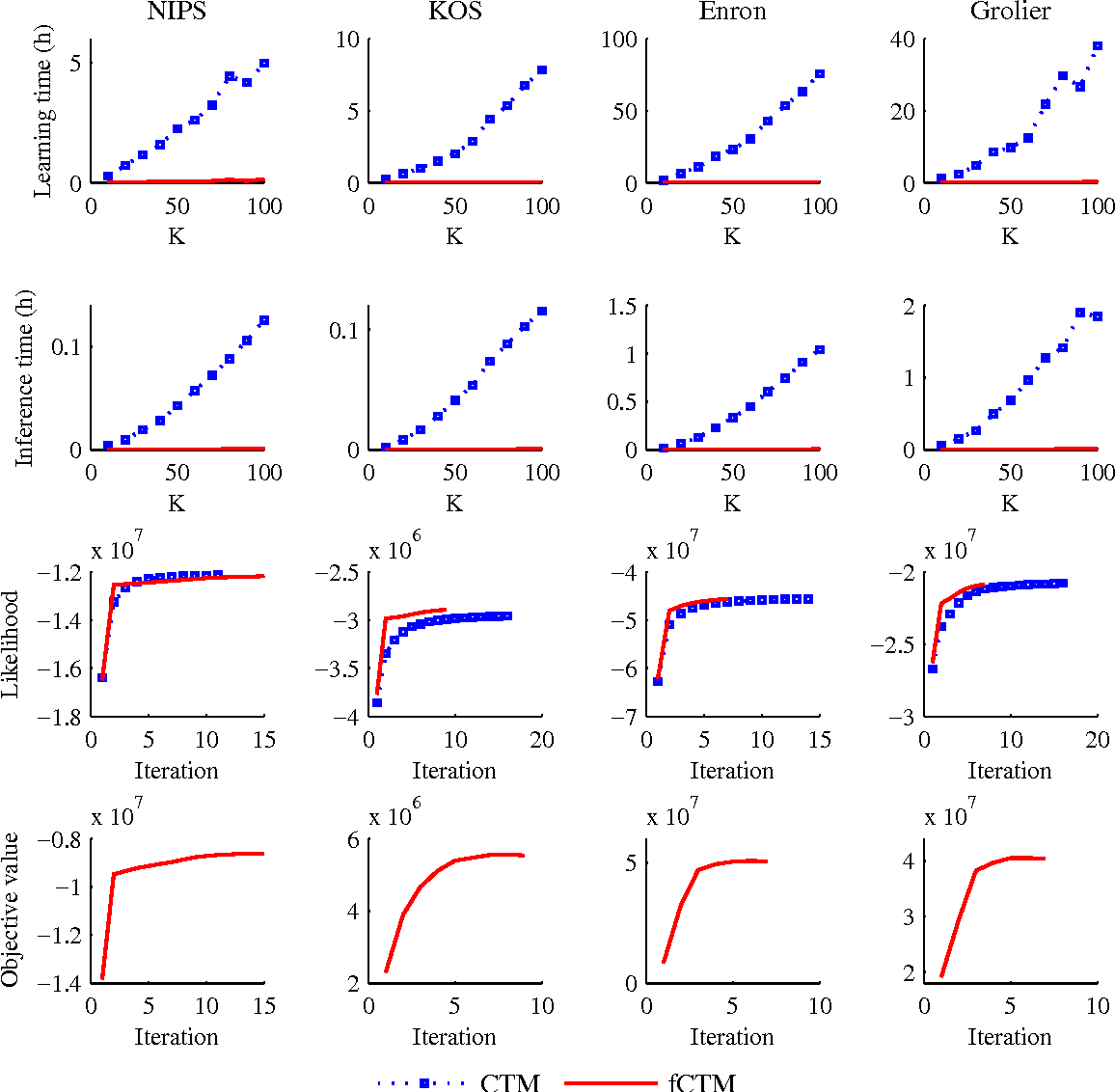 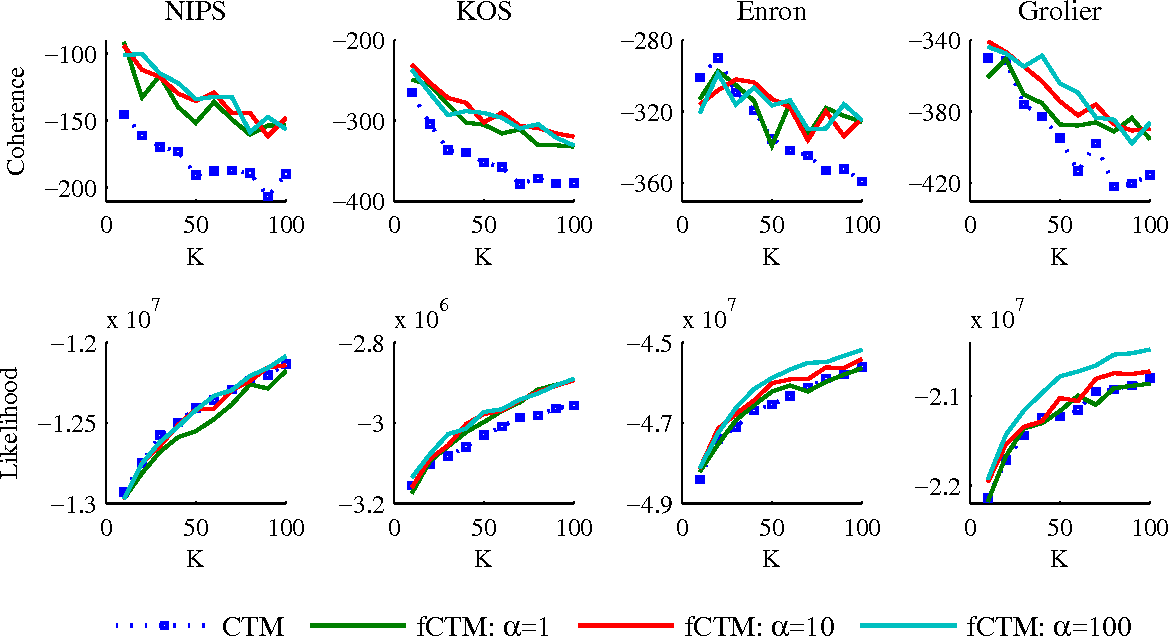 Non-convex optimization problems often arise from probabilistic modeling, such as estimation of posterior distributions. Non-convexity makes the problems intractable, and poses various obstacles for us to design efficient algorithms. In this work, we attack non-convexity by first introducing the concept of \emph{probable convexity} for analyzing convexity of real functions in practice. We then use the new concept to analyze an inference problem in the \emph{Correlated Topic Model} (CTM) and related nonconjugate models. Contrary to the existing belief of intractability, we show that this inference problem is concave under certain conditions. One consequence of our analyses is a novel algorithm for learning CTM which is significantly more scalable and qualitative than existing methods. Finally, we highlight that stochastic gradient algorithms might be a practical choice to resolve efficiently non-convex problems. This finding might find beneficial in many contexts which are beyond probabilistic modeling.

Latent Dirichlet Allocation (LDA) is a topic model widely used in natural language processing and machine learning. Most approaches to training the model rely on iterative algorithms, which makes it difficult to run LDA on big corpora that are best analyzed in parallel and distributed computational environments. Indeed, current approaches to parallel inference either don't converge to the correct posterior or require storage of large dense matrices in memory. We present a novel sampler that overcomes both problems, and we show that this sampler is faster, both empirically and theoretically, than previous Gibbs samplers for LDA. We do so by employing a novel P\'olya-urn-based approximation in the sparse partially collapsed sampler for LDA. We prove that the approximation error vanishes with data size, making our algorithm asymptotically exact, a property of importance for large-scale topic models. In addition, we show, via an explicit example, that -- contrary to popular belief in the topic modeling literature -- partially collapsed samplers can be more efficient than fully collapsed samplers. We conclude by comparing the performance of our algorithm with that of other approaches on well-known corpora. 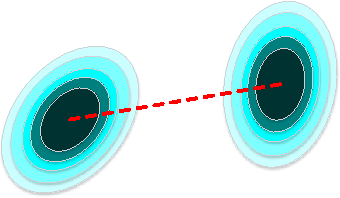 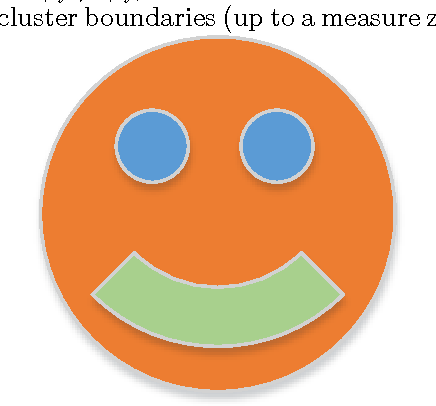 In the mixture models problem it is assumed that there are $K$ distributions $\theta_{1},\ldots,\theta_{K}$ and one gets to observe a sample from a mixture of these distributions with unknown coefficients. The goal is to associate instances with their generating distributions, or to identify the parameters of the hidden distributions. In this work we make the assumption that we have access to several samples drawn from the same $K$ underlying distributions, but with different mixing weights. As with topic modeling, having multiple samples is often a reasonable assumption. Instead of pooling the data into one sample, we prove that it is possible to use the differences between the samples to better recover the underlying structure. We present algorithms that recover the underlying structure under milder assumptions than the current state of art when either the dimensionality or the separation is high. The methods, when applied to topic modeling, allow generalization to words not present in the training data. 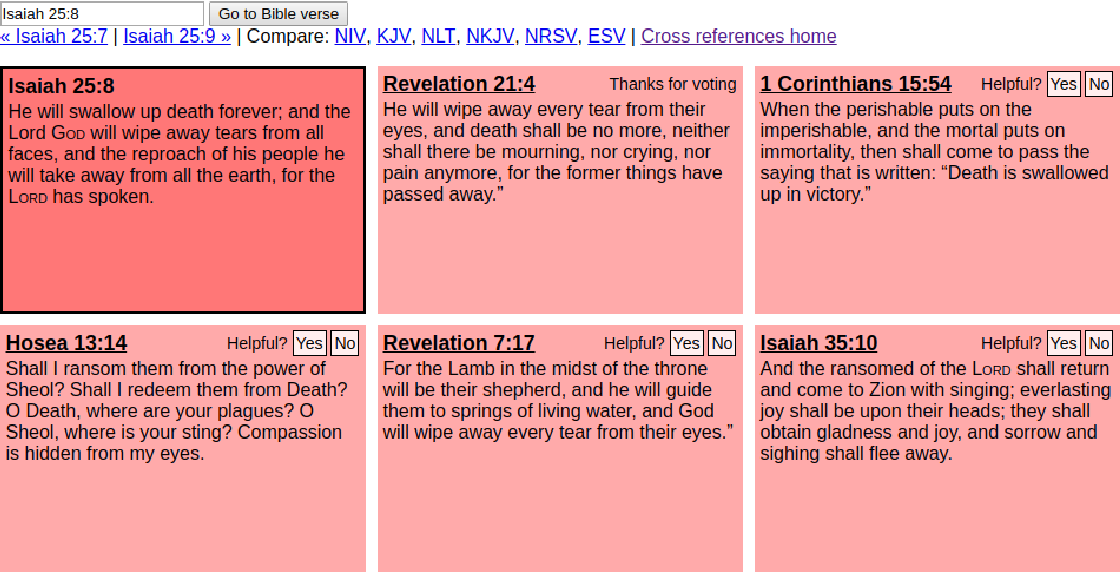 Cross-referencing, which links passages of text to other related passages, can be a valuable study aid for facilitating comprehension of a text. However, cross-referencing requires first, a comprehensive thematic knowledge of the entire corpus, and second, a focused search through the corpus specifically to find such useful connections. Due to this, cross-reference resources are prohibitively expensive and exist only for the most well-studied texts (e.g. religious texts). We develop a topic-based system for automatically producing candidate cross-references which can be easily verified by human annotators. Our system utilizes fine-grained topic modeling with thousands of highly nuanced and specific topics to identify verse pairs which are topically related. We demonstrate that our system can be cost effective compared to having annotators acquire the expertise necessary to produce cross-reference resources unaided. 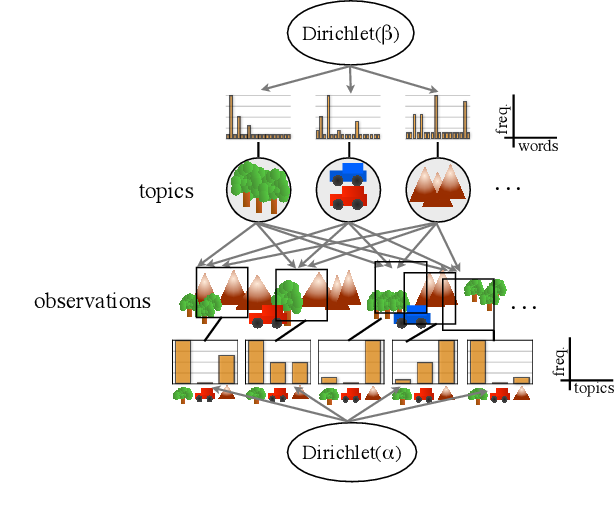 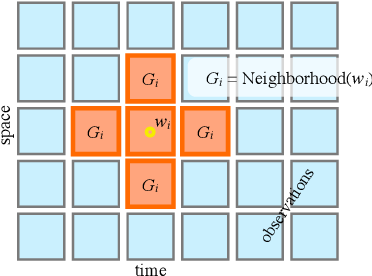 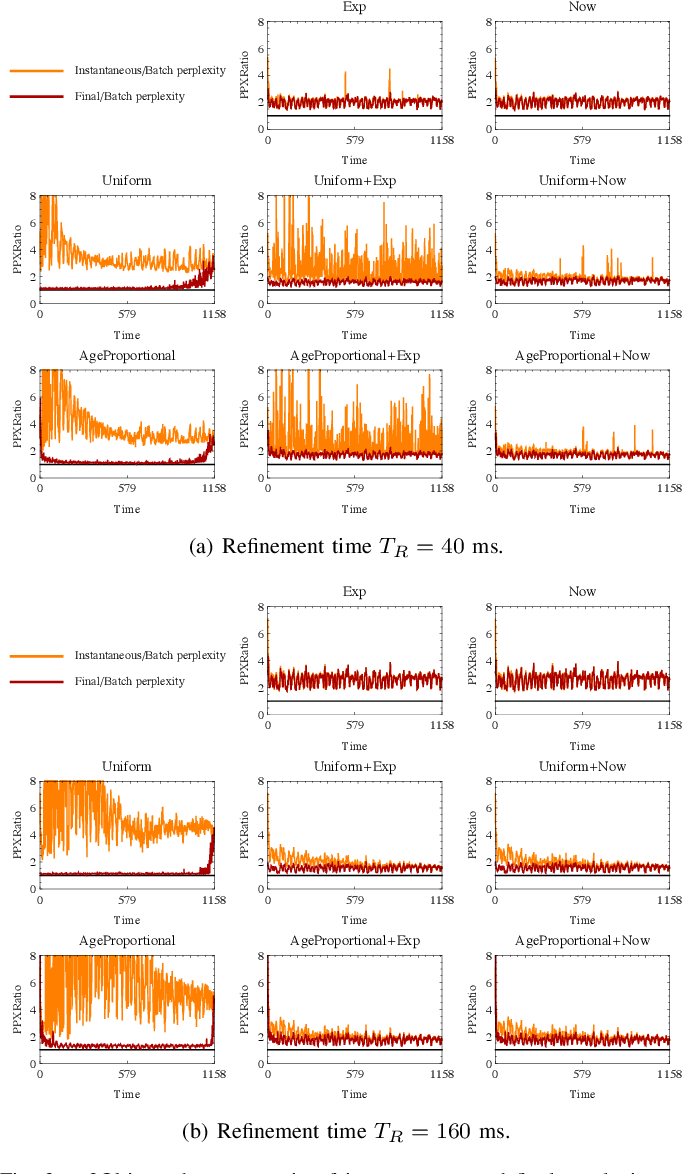 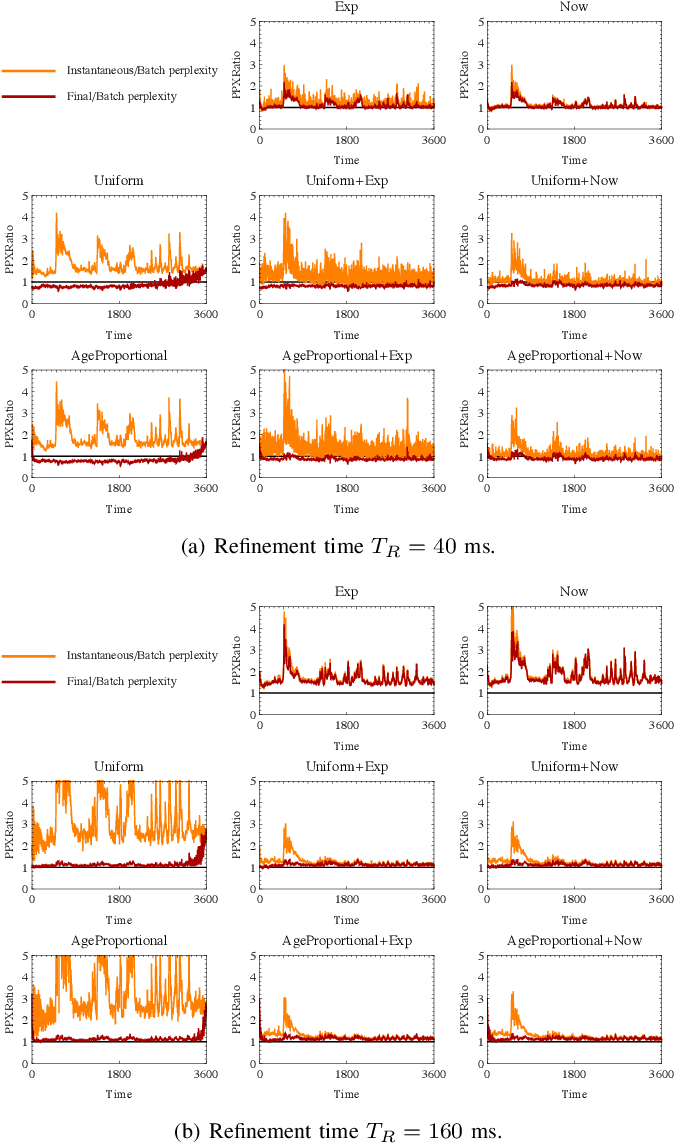 Topic modeling of streaming sensor data can be used for high level perception of the environment by a mobile robot. In this paper we compare various Gibbs sampling strategies for topic modeling of streaming spatiotemporal data, such as video captured by a mobile robot. Compared to previous work on online topic modeling, such as o-LDA and incremental LDA, we show that the proposed technique results in lower online and final perplexity, given the realtime constraints. 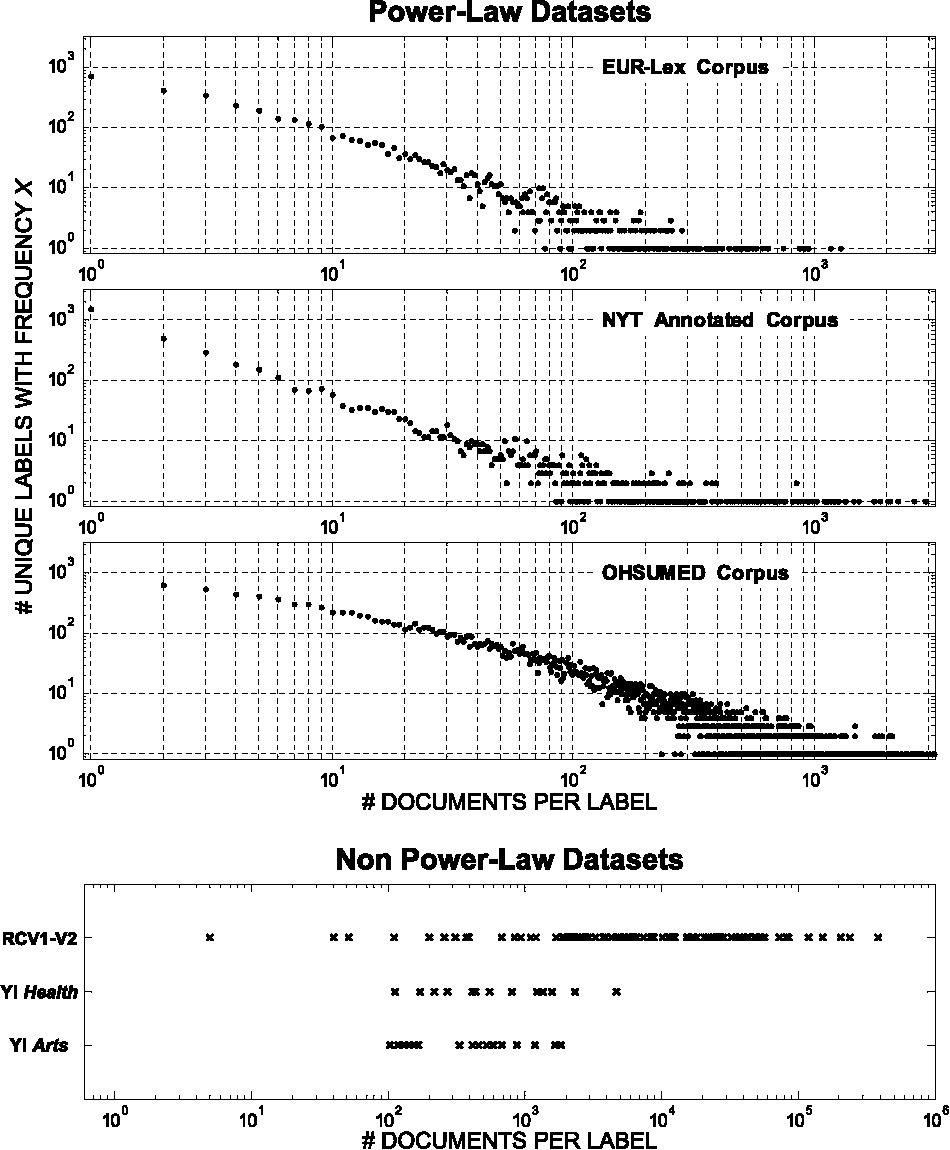 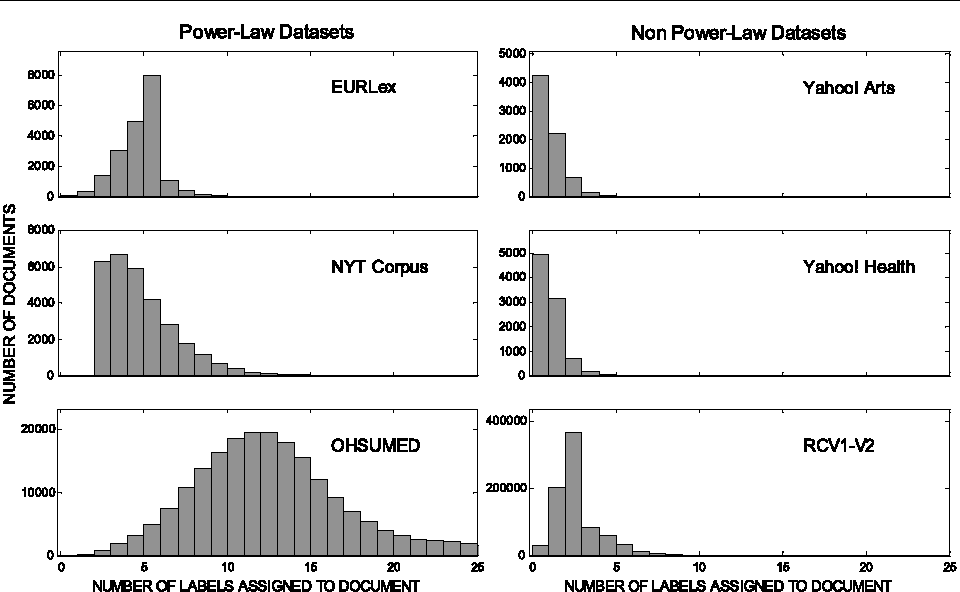 Machine learning approaches to multi-label document classification have to date largely relied on discriminative modeling techniques such as support vector machines. A drawback of these approaches is that performance rapidly drops off as the total number of labels and the number of labels per document increase. This problem is amplified when the label frequencies exhibit the type of highly skewed distributions that are often observed in real-world datasets. In this paper we investigate a class of generative statistical topic models for multi-label documents that associate individual word tokens with different labels. We investigate the advantages of this approach relative to discriminative models, particularly with respect to classification problems involving large numbers of relatively rare labels. We compare the performance of generative and discriminative approaches on document labeling tasks ranging from datasets with several thousand labels to datasets with tens of labels. The experimental results indicate that probabilistic generative models can achieve competitive multi-label classification performance compared to discriminative methods, and have advantages for datasets with many labels and skewed label frequencies.


* 44 Pages (Including Appendices). To be published in: The Machine Learning Journal, special issue on Learning from Multi-Label Data. Version 2 corrects some typos, updates some of the notation used in the paper for clarification of some equations, and incorporates several relatively minor changes to the text throughout the paper 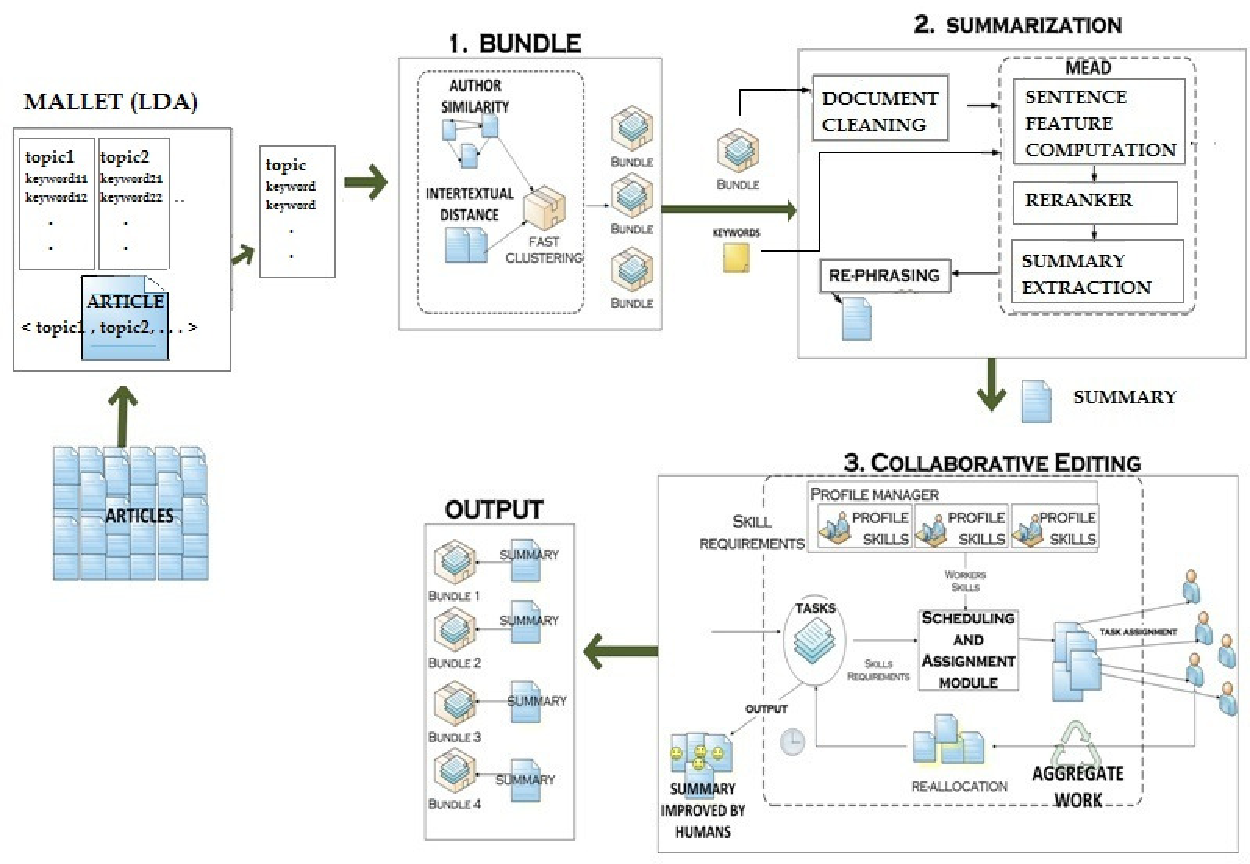 Automatic classification of scientific articles based on common characteristics is an interesting problem with many applications in digital library and information retrieval systems. Properly organized articles can be useful for automatic generation of taxonomies in scientific writings, textual summarization, efficient information retrieval etc. Generating article bundles from a large number of input articles, based on the associated features of the articles is tedious and computationally expensive task. In this report we propose an automatic two-step approach for topic extraction and bundling of related articles from a set of scientific articles in real-time. For topic extraction, we make use of Latent Dirichlet Allocation (LDA) topic modeling techniques and for bundling, we make use of hierarchical agglomerative clustering techniques. We run experiments to validate our bundling semantics and compare it with existing models in use. We make use of an online crowdsourcing marketplace provided by Amazon called Amazon Mechanical Turk to carry out experiments. We explain our experimental setup and empirical results in detail and show that our method is advantageous over existing ones.

In this paper, we present an approach to learning latent semantic analysis models from loosely annotated images for automatic image annotation and indexing. The given annotation in training images is loose due to: (1) ambiguous correspondences between visual features and annotated keywords; (2) incomplete lists of annotated keywords. The second reason motivates us to enrich the incomplete annotation in a simple way before learning topic models. In particular, some imagined keywords are poured into the incomplete annotation through measuring similarity between keywords. Then, both given and imagined annotations are used to learning probabilistic topic models for automatically annotating new images. We conduct experiments on a typical Corel dataset of images and loose annotations, and compare the proposed method with state-of-the-art discrete annotation methods (using a set of discrete blobs to represent an image). The proposed method improves word-driven probability Latent Semantic Analysis (PLSA-words) up to a comparable performance with the best discrete annotation method, while a merit of PLSA-words is still kept, i.e., a wider semantic range. 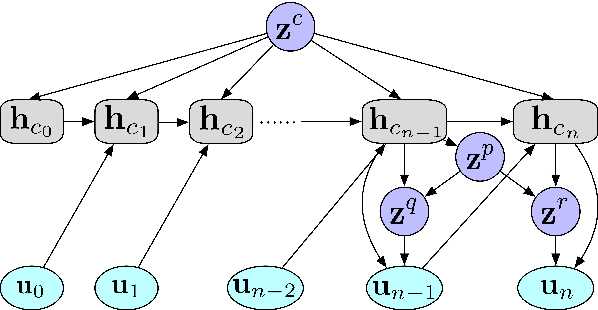 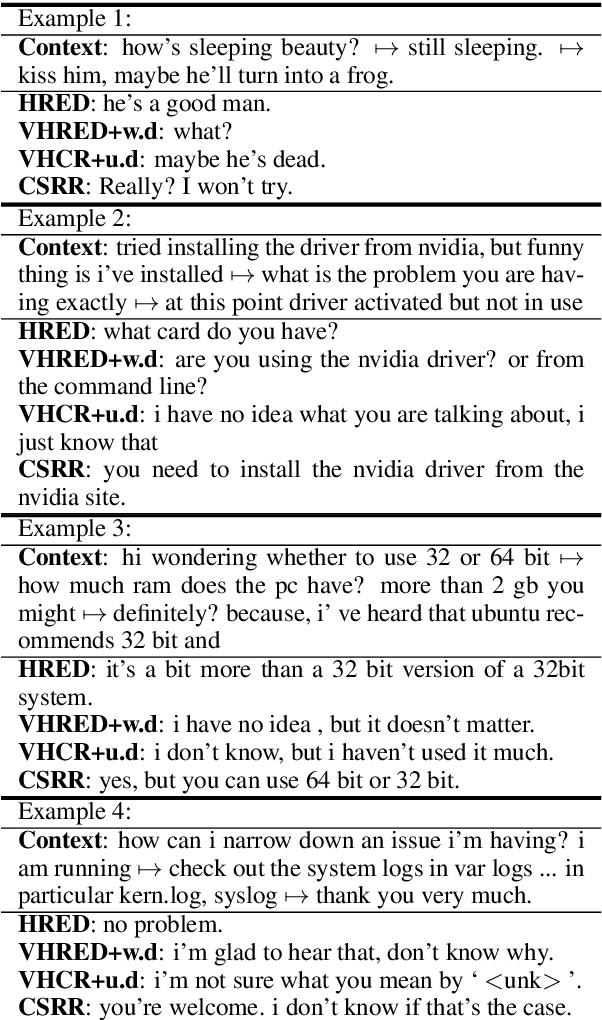 Multi-turn conversations consist of complex semantic structures, and it is still a challenge to generate coherent and diverse responses given previous utterances. It's practical that a conversation takes place under a background, meanwhile, the query and response are usually most related and they are consistent in topic but also different in content. However, little work focuses on such hierarchical relationship among utterances. To address this problem, we propose a Conversational Semantic Relationship RNN (CSRR) model to construct the dependency explicitly. The model contains latent variables in three hierarchies. The discourse-level one captures the global background, the pair-level one stands for the common topic information between query and response, and the utterance-level ones try to represent differences in content. Experimental results show that our model significantly improves the quality of responses in terms of fluency, coherence and diversity compared to baseline methods.