With the growing phase of artificial intelligence and autonomous learning, the self-driving car is one of the promising area of research and emerging as a center of focus for automobile industries. Behavioral cloning is the process of replicating human behavior via visuomotor policies by means of machine learning algorithms. In recent years, several deep learning-based behavioral cloning approaches have been developed in the context of self-driving cars specifically based on the concept of transfer learning. Concerning the same, the present paper proposes a transfer learning approach using VGG16 architecture, which is fine tuned by retraining the last block while keeping other blocks as non-trainable. The performance of proposed architecture is further compared with existing NVIDIA architecture and its pruned variants (pruned by 22.2% and 33.85% using 1x1 filter to decrease the total number of parameters). Experimental results show that the VGG16 with transfer learning architecture has outperformed other discussed approaches with faster convergence. 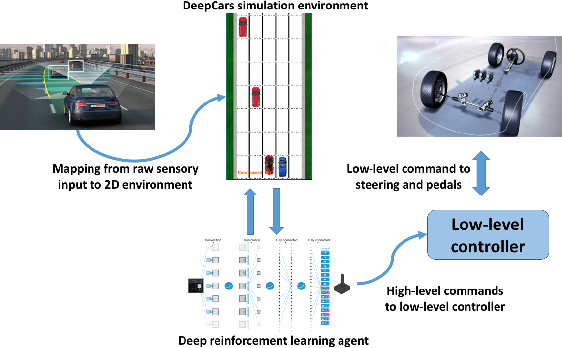 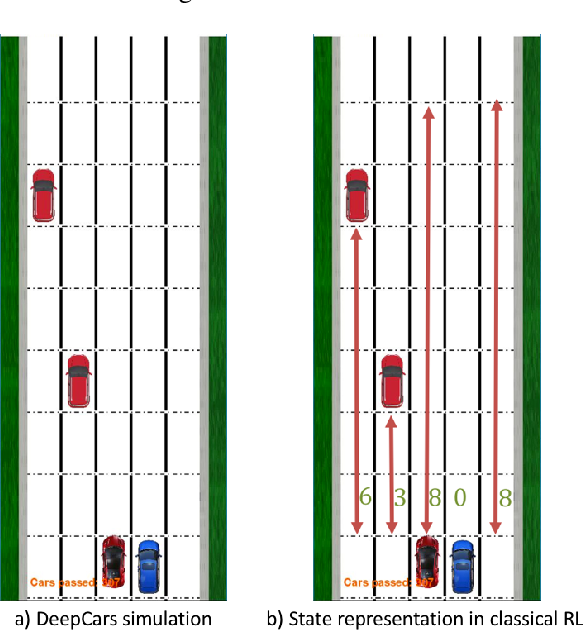 Tactical decision making is a critical feature for advanced driving systems, that incorporates several challenges such as complexity of the uncertain environment and reliability of the autonomous system. In this work, we develop a multi-modal architecture that includes the environmental modeling of ego surrounding and train a deep reinforcement learning (DRL) agent that yields consistent performance in stochastic highway driving scenarios. To this end, we feed the occupancy grid of the ego surrounding into the DRL agent and obtain the high-level sequential commands (i.e. lane change) to send them to lower-level controllers. We will show that dividing the autonomous driving problem into a multi-layer control architecture enables us to leverage the AI power to solve each layer separately and achieve an admissible reliability score. Comparing with end-to-end approaches, this architecture enables us to end up with a more reliable system which can be implemented in actual self-driving cars. 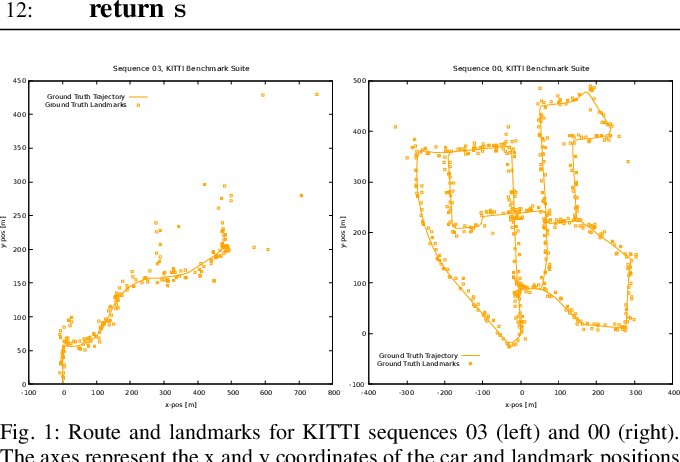 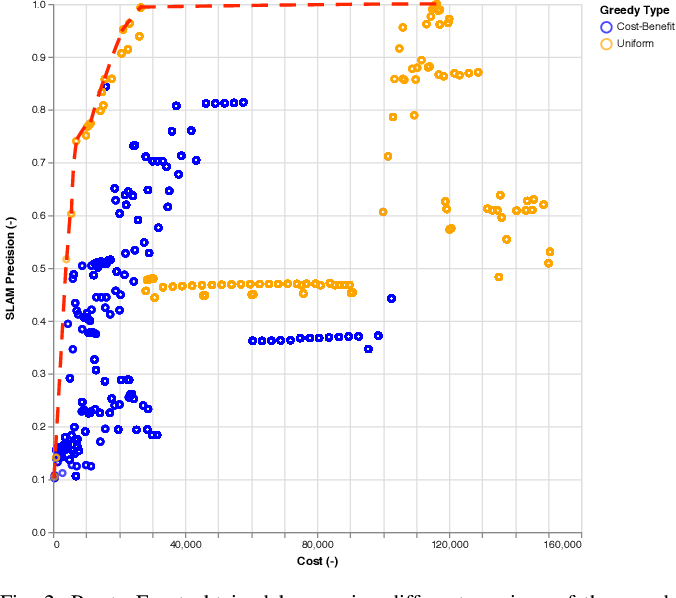 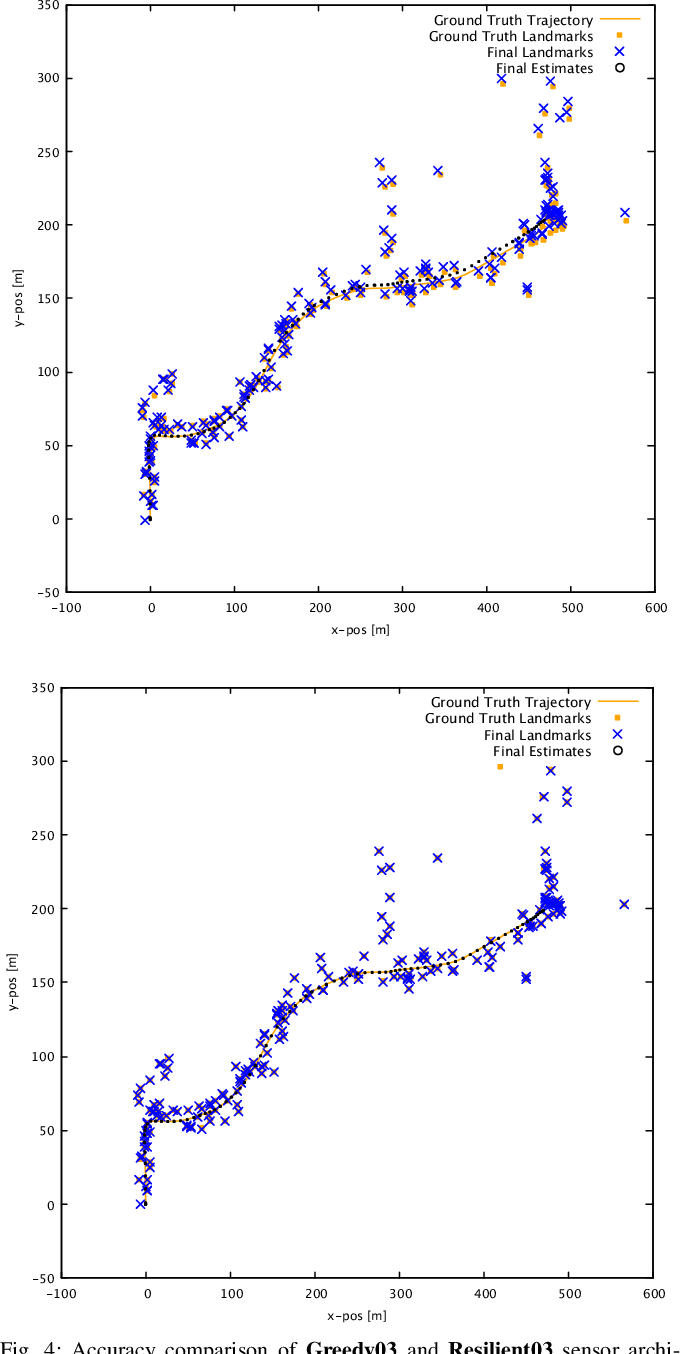 As autonomous cars are rolled out into new environments, their ability to solve the simultaneous localization and mapping (SLAM) problem becomes critical. In order to tackle this problem, autonomous vehicles rely on sensor suites that provide them with information about their operating environment. When large scale production is taken into consideration, a trade-off between an acceptable sensor suite cost and its resulting performance characteristics arises. Furthermore, guaranteeing the system's performance requires a resilient sensor network design. This work seeks to address such trade-offs by introducing a method that takes into account the performance, cost, and resiliency of distinct sensor selections. As a result, this method is able to offer sensor combination recommendations based on the vehicle's operating environment. It is found that the structure of the environment influences sensor placement, and that the design of a resilient sensor network involves careful consideration of both environmental attributes such as landmark density and location, as well as the available types of complimentary sensors. Demonstration of the proposed approach is shown by evaluating it using sequences from the KITTI Benchmark Suite. 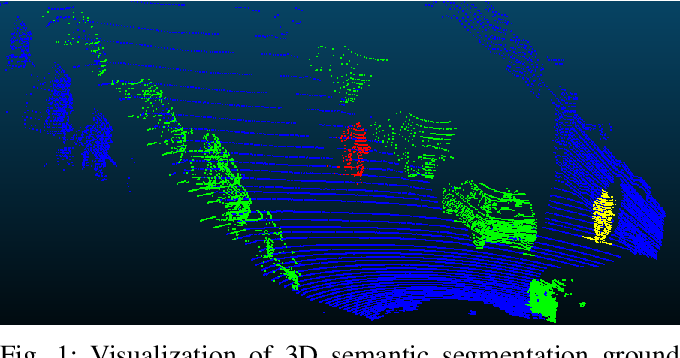 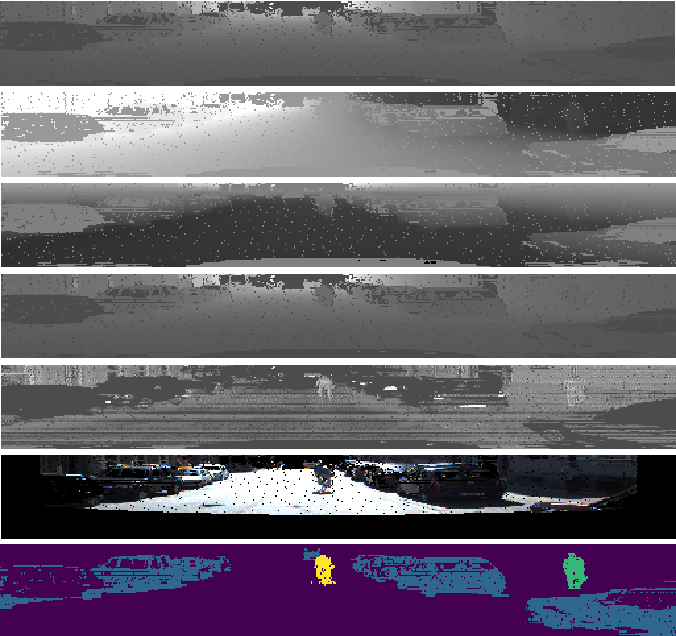 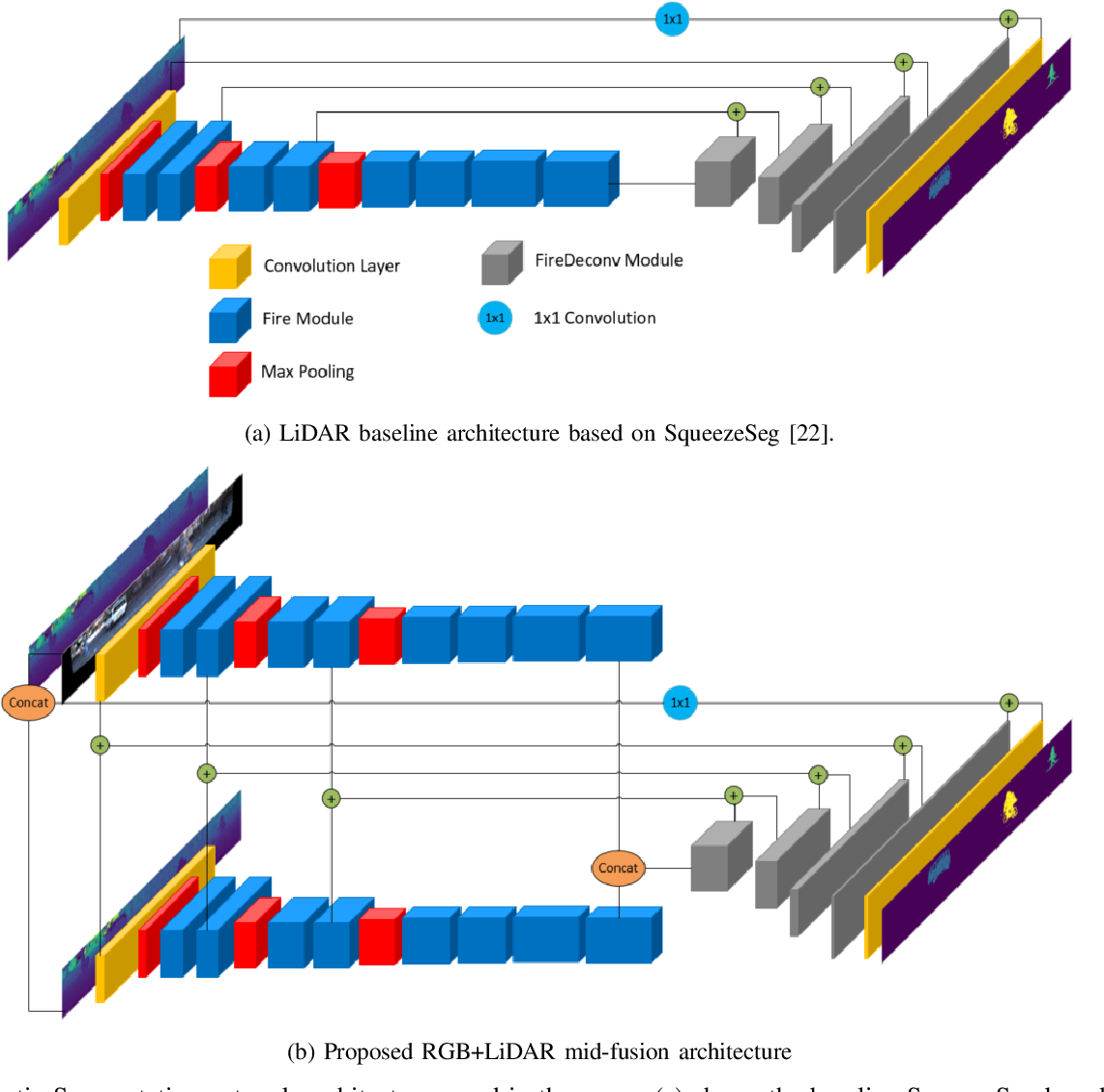 LiDAR has become a standard sensor for autonomous driving applications as they provide highly precise 3D point clouds. LiDAR is also robust for low-light scenarios at night-time or due to shadows where the performance of cameras is degraded. LiDAR perception is gradually becoming mature for algorithms including object detection and SLAM. However, semantic segmentation algorithm remains to be relatively less explored. Motivated by the fact that semantic segmentation is a mature algorithm on image data, we explore sensor fusion based 3D segmentation. To the best of our knowledge, this is the first attempt at RGB and LiDAR based 3D segmentation for autonomous driving. Our main contribution is to convert the RGB image to a polar-grid mapping representation used for LiDAR and design early and mid-level fusion architectures. Additionally, we design a hybrid fusion architecture that combines both fusion algorithms. We evaluate our algorithm on KITTI dataset which provides segmentation annotation for cars, pedestrians and cyclists. We evaluate two state-of-the-art architectures namely SqueezeSeg and PointSeg and improve the mIoU score by 10 % in both cases relative to the LiDAR only baseline. 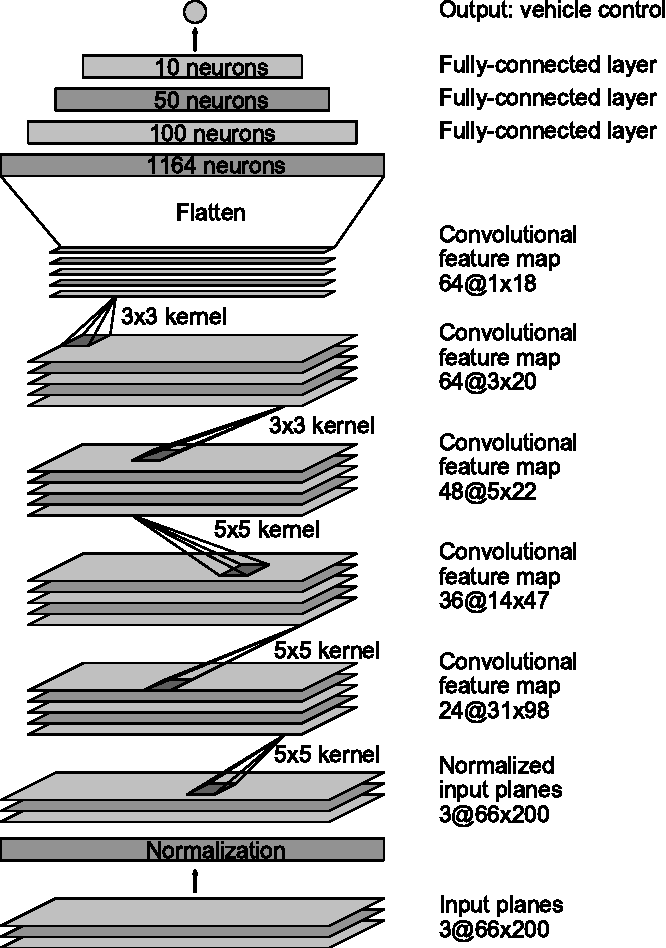 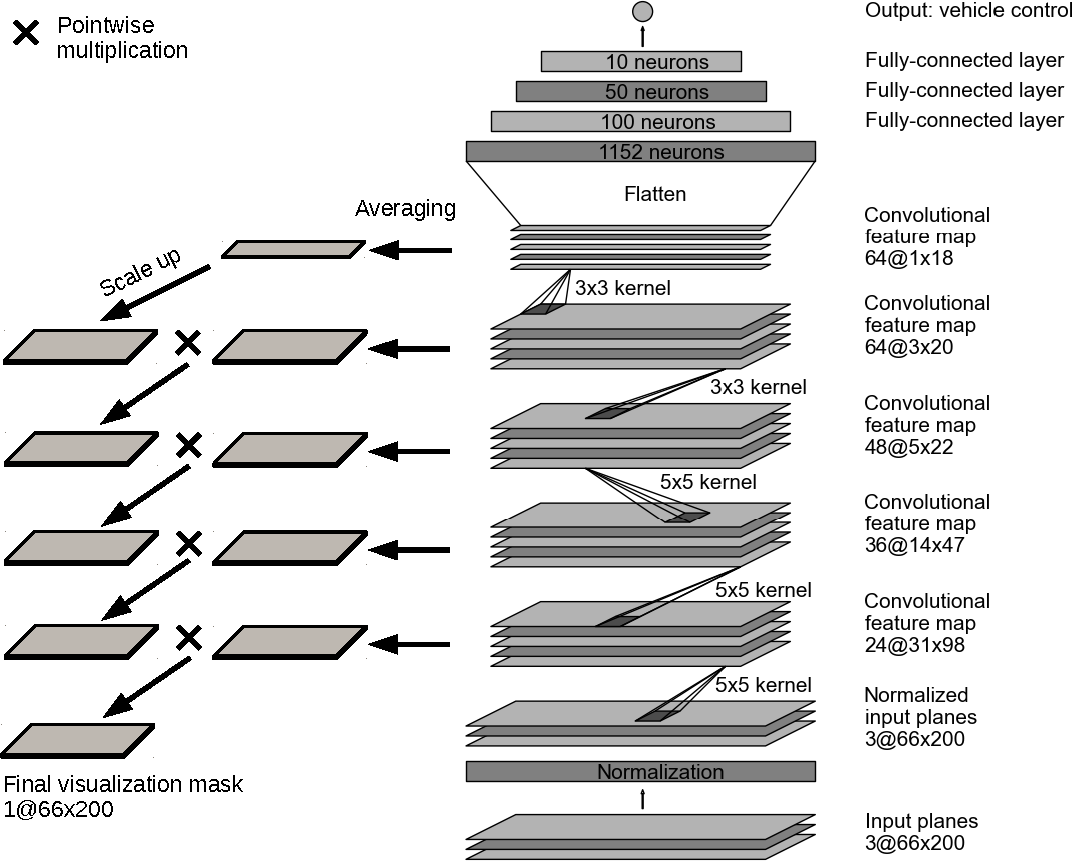 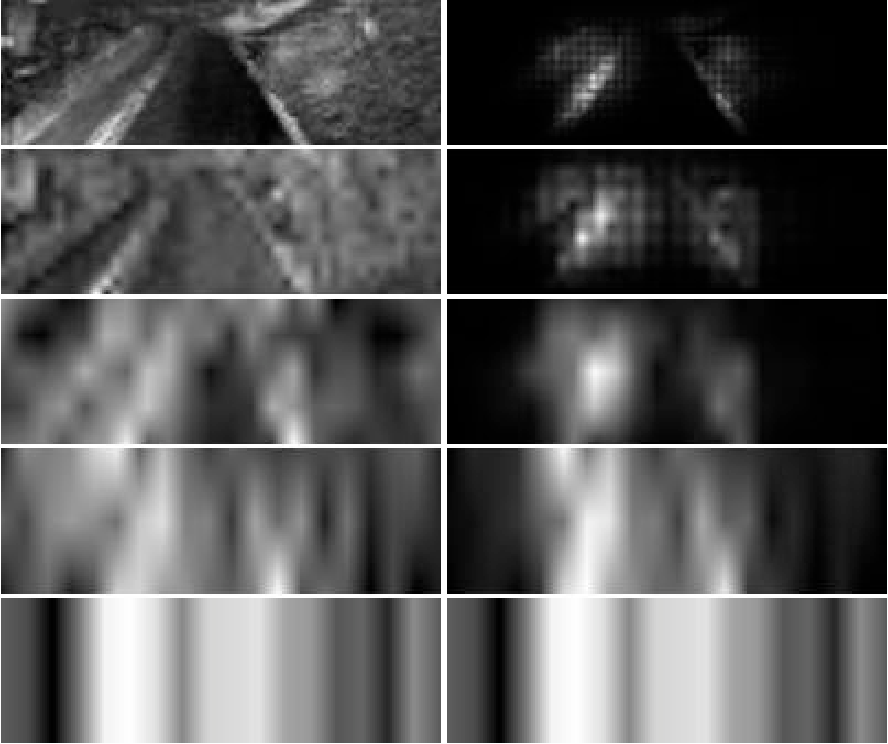 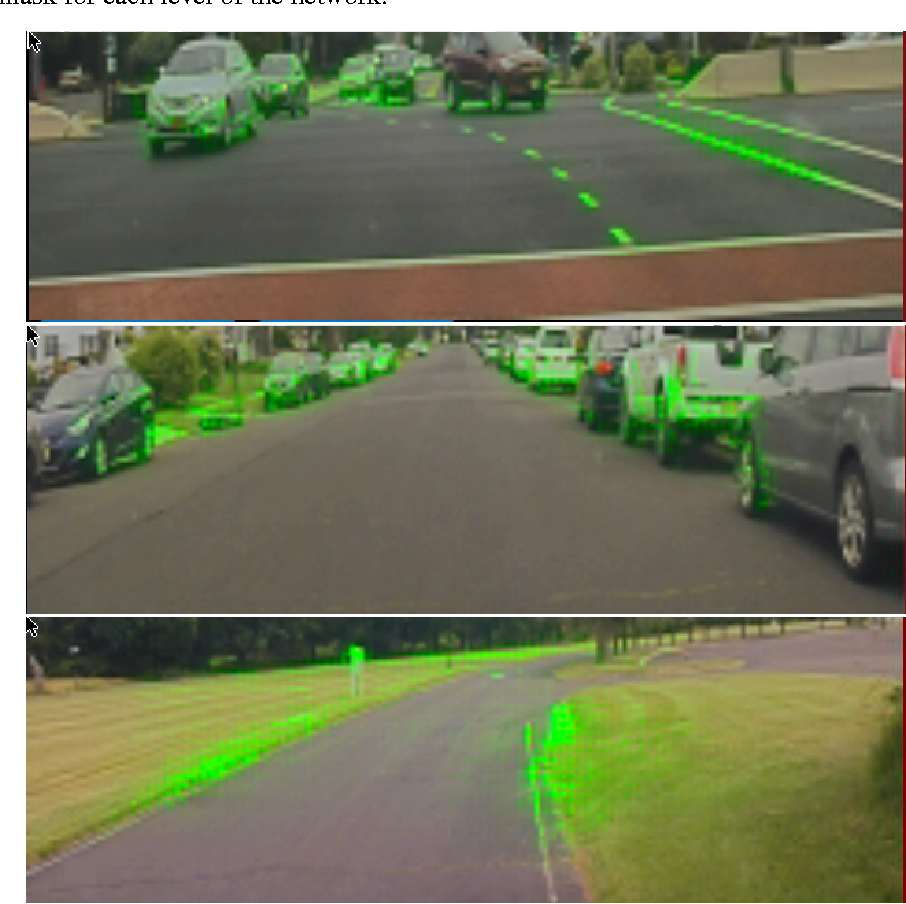 As part of a complete software stack for autonomous driving, NVIDIA has created a neural-network-based system, known as PilotNet, which outputs steering angles given images of the road ahead. PilotNet is trained using road images paired with the steering angles generated by a human driving a data-collection car. It derives the necessary domain knowledge by observing human drivers. This eliminates the need for human engineers to anticipate what is important in an image and foresee all the necessary rules for safe driving. Road tests demonstrated that PilotNet can successfully perform lane keeping in a wide variety of driving conditions, regardless of whether lane markings are present or not. The goal of the work described here is to explain what PilotNet learns and how it makes its decisions. To this end we developed a method for determining which elements in the road image most influence PilotNet's steering decision. Results show that PilotNet indeed learns to recognize relevant objects on the road. In addition to learning the obvious features such as lane markings, edges of roads, and other cars, PilotNet learns more subtle features that would be hard to anticipate and program by engineers, for example, bushes lining the edge of the road and atypical vehicle classes. 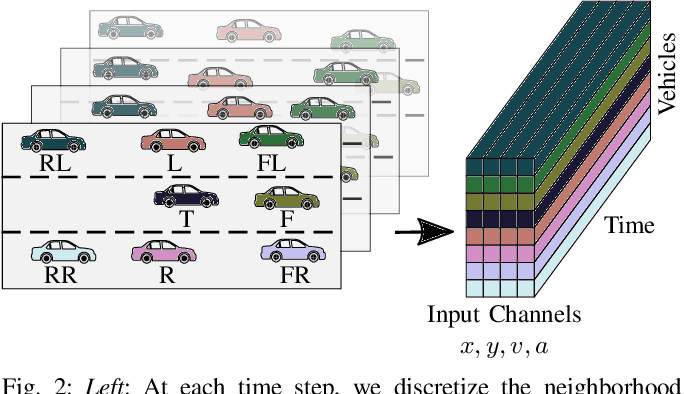 The ability to predict the future movements of other vehicles is a subconscious and effortless skill for humans and key to safe autonomous driving. Therefore, trajectory prediction for autonomous cars has gained a lot of attention in recent years. It is, however, still a hard task to achieve human-level performance. Interdependencies between vehicle behaviors and the multimodal nature of future intentions in a dynamic and complex driving environment render trajectory prediction a challenging problem. In this work, we propose a new, data-driven approach for predicting the motion of vehicles in a road environment. The model allows for inferring future intentions from the past interaction among vehicles in highway driving scenarios. Using our neighborhood-based data representation, the proposed system jointly exploits correlations in the spatial and temporal domain using convolutional neural networks. Our system considers multiple possible maneuver intentions and their corresponding motion and predicts the trajectory for five seconds into the future. We implemented our approach and evaluated it on two highway datasets taken in different countries and are able to achieve a competitive prediction performance. 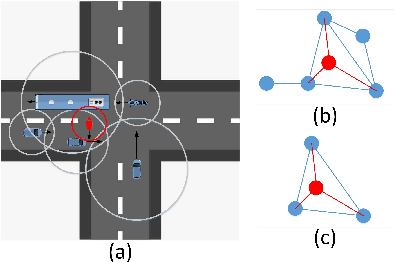 Predicting future trajectories of surrounding obstacles is a crucial task for autonomous driving cars to achieve a high degree of road safety. There are several challenges in trajectory prediction in real-world traffic scenarios, including obeying traffic rules, dealing with social interactions, handling traffic of multi-class movement, and predicting multi-modal trajectories with probability. Inspired by people's natural habit of navigating traffic with attention to their goals and surroundings, this paper presents a unique dynamic graph attention network to solve all those challenges. The network is designed to model the dynamic social interactions among agents and conform to traffic rules with a semantic map. By extending the anchor-based method to multiple types of agents, the proposed method can predict multi-modal trajectories with probabilities for multi-class movements using a single model. We validate our approach on the proprietary autonomous driving dataset for the logistic delivery scenario and two publicly available datasets. The results show that our method outperforms state-of-the-art techniques and demonstrates the potential for trajectory prediction in real-world traffic. 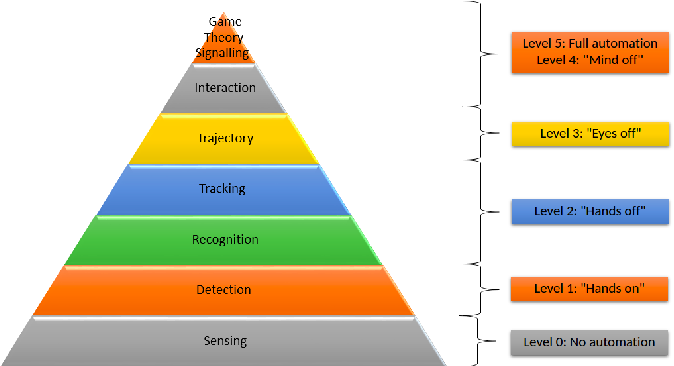 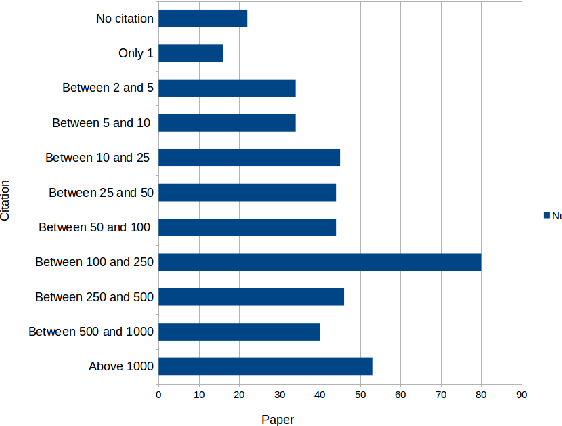 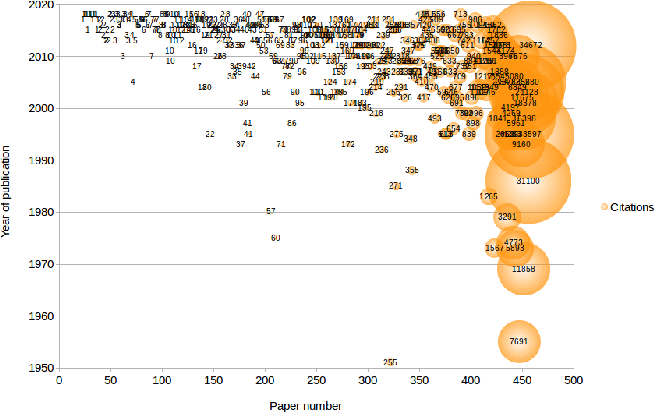 Autonomous vehicles (AVs) must share space with human pedestrians, both in on-road cases such as cars at pedestrian crossings and off-road cases such as delivery vehicles navigating through crowds on high-streets. Unlike static and kinematic obstacles, pedestrians are active agents with complex, interactive motions. Planning AV actions in the presence of pedestrians thus requires modelling of their probable future behaviour as well as detection and tracking which enable such modelling. This narrative review article is Part II of a pair which together survey the current technology stack involved in this process, organising recent research into a hierarchical taxonomy ranging from low level image detection to high-level psychological models, from the perspective of an AV designer. This self-contained Part II covers the higher levels of this stack, consisting of models of pedestrian behaviour, from prediction of individual pedestrians' likely destinations and paths, to game theoretic models of interactions between pedestrians and autonomous vehicles. This survey clearly shows that, although there are good models for optimal walking behaviour, high-level psychological and social modelling of pedestrian behaviour still remains an open research question that requires many conceptual issues to be clarified by the community. At these levels, early work has been done on descriptive and qualitative models of behaviour, but much work is still needed to translate them into quantitative algorithms for practical AV control. 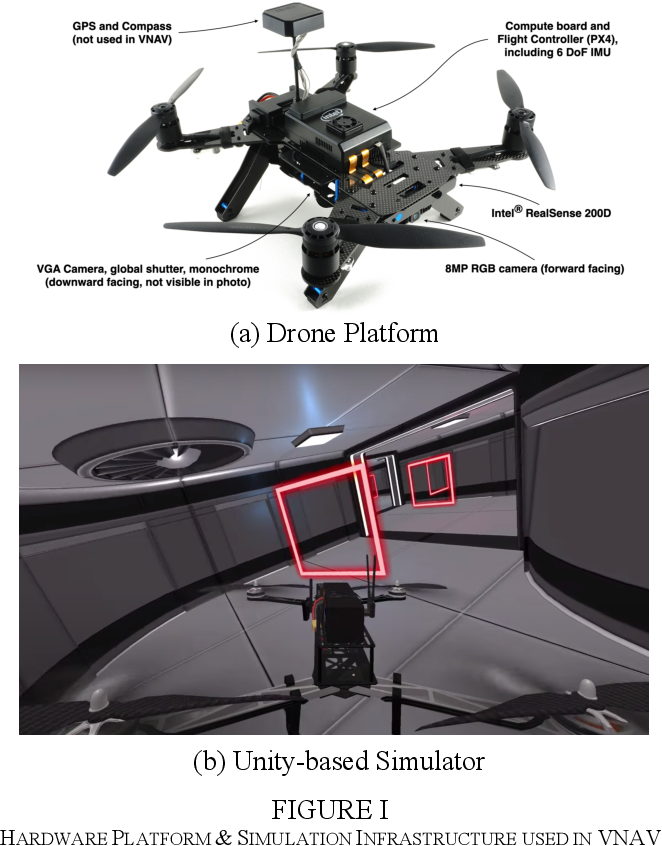 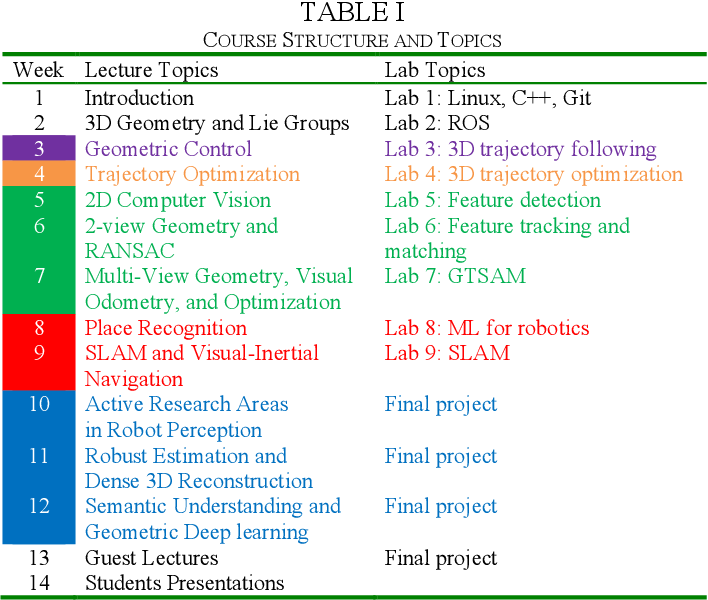 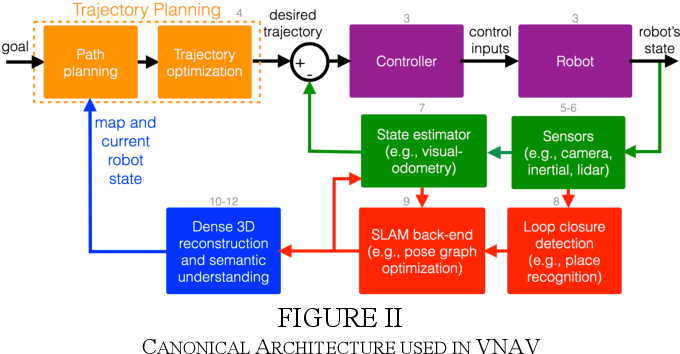 This paper reports on the development, execution, and open-sourcing of a new robotics course at MIT. The course is a modern take on "Visual Navigation for Autonomous Vehicles" (VNAV) and targets first-year graduate students and senior undergraduates with prior exposure to robotics. VNAV has the goal of preparing the students to perform research in robotics and vision-based navigation, with emphasis on drones and self-driving cars. The course spans the entire autonomous navigation pipeline; as such, it covers a broad set of topics, including geometric control and trajectory optimization, 2D and 3D computer vision, visual and visual-inertial odometry, place recognition, simultaneous localization and mapping, and geometric deep learning for perception. VNAV has three key features. First, it bridges traditional computer vision and robotics courses by exposing the challenges that are specific to embodied intelligence, e.g., limited computation and need for just-in-time and robust perception to close the loop over control and decision making. Second, it strikes a balance between depth and breadth by combining rigorous technical notes (including topics that are less explored in typical robotics courses, e.g., on-manifold optimization) with slides and videos showcasing the latest research results. Third, it provides a compelling approach to hands-on robotics education by leveraging a physical drone platform (mostly suitable for small residential courses) and a photo-realistic Unity-based simulator (open-source and scalable to large online courses). VNAV has been offered at MIT in the Falls of 2018-2021 and is now publicly available on MIT OpenCourseWare (OCW).

Deep Neural Networks (DNNs) are rapidly being adopted by the automotive industry, due to their impressive performance in tasks that are essential for autonomous driving. Object segmentation is one such task: its aim is to precisely locate boundaries of objects and classify the identified objects, helping autonomous cars to recognise the road environment and the traffic situation. Not only is this task safety critical, but developing a DNN based object segmentation module presents a set of challenges that are significantly different from traditional development of safety critical software. The development process in use consists of multiple iterations of data collection, labelling, training, and evaluation. Among these stages, training and evaluation are computation intensive while data collection and labelling are manual labour intensive. This paper shows how development of DNN based object segmentation can be improved by exploiting the correlation between Surprise Adequacy (SA) and model performance. The correlation allows us to predict model performance for inputs without manually labelling them. This, in turn, enables understanding of model performance, more guided data collection, and informed decisions about further training. In our industrial case study the technique allows cost savings of up to 50% with negligible evaluation inaccuracy. Furthermore, engineers can trade off cost savings versus the tolerable level of inaccuracy depending on different development phases and scenarios.