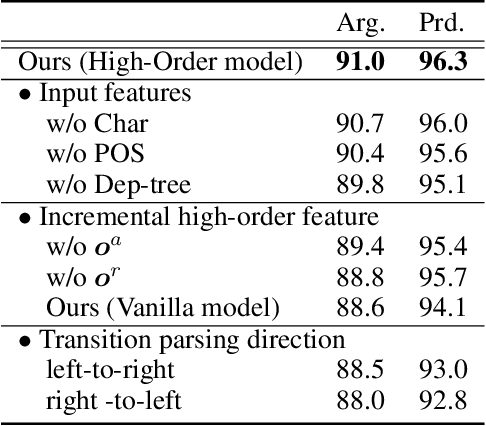 End-to-end semantic role labeling (SRL) has been received increasing interest. It performs the two subtasks of SRL: predicate identification and argument role labeling, jointly. Recent work is mostly focused on graph-based neural models, while the transition-based framework with neural networks which has been widely used in a number of closely-related tasks, has not been studied for the joint task yet. In this paper, we present the first work of transition-based neural models for end-to-end SRL. Our transition model incrementally discovers all sentential predicates as well as their arguments by a set of transition actions. The actions of the two subtasks are executed mutually for full interactions. Besides, we suggest high-order compositions to extract non-local features, which can enhance the proposed transition model further. Experimental results on CoNLL09 and Universal Proposition Bank show that our final model can produce state-of-the-art performance, and meanwhile keeps highly efficient in decoding. We also conduct detailed experimental analysis for a deep understanding of our proposed model.