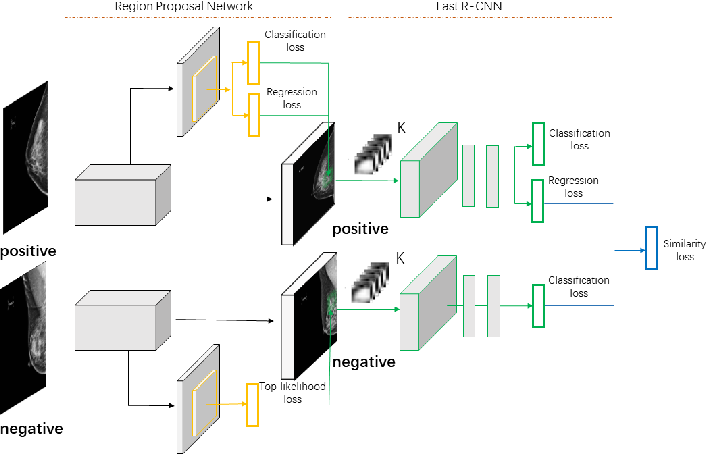 Deep learning object detection algorithm has been widely used in medical image analysis. Currently all the object detection tasks are based on the data annotated with object classes and their bounding boxes. On the other hand, medical images such as mammography usually contain normal regions or objects that are similar to the lesion region, and may be misclassified in the testing stage if they are not taken care of. In this paper, we address such problem by introducing a novel top likelihood loss together with a new sampling procedure to select and train the suspected target regions, as well as proposing a similarity loss to further identify suspected targets from targets. Mean average precision (mAP) according to the predicted targets and specificity, sensitivity, accuracy, AUC values according to classification of patients are adopted for performance comparisons. We firstly test our proposed method on a private dense mammogram dataset. Results show that our proposed method greatly reduce the false positive rate and the specificity is increased by 0.25 on detecting mass type cancer. It is worth mention that dense breast typically has a higher risk for developing breast cancers and also are harder for cancer detection in diagnosis, and our method outperforms a reported result from performance of radiologists. Our method is also validated on the public Digital Database for Screening Mammography (DDSM) dataset, brings significant improvement on mass type cancer detection and outperforms the most state-of-the-art work.