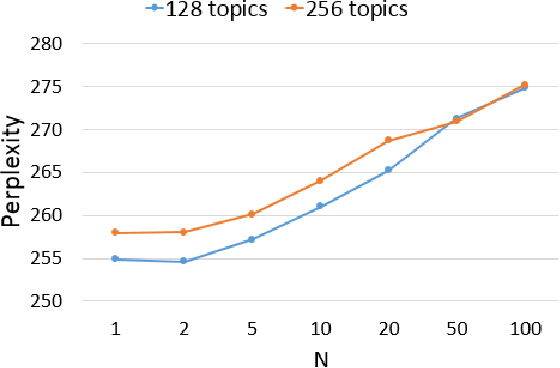 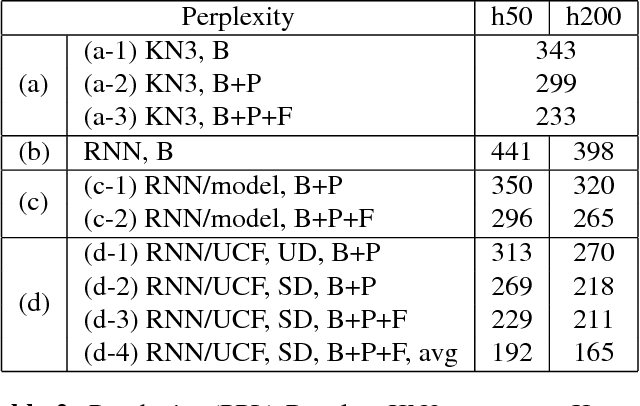 With the popularity of mobile devices, personalized speech recognizer becomes more realizable today and highly attractive. Each mobile device is primarily used by a single user, so it's possible to have a personalized recognizer well matching to the characteristics of individual user. Although acoustic model personalization has been investigated for decades, much less work have been reported on personalizing language model, probably because of the difficulties in collecting enough personalized corpora. Previous work used the corpora collected from social networks to solve the problem, but constructing a personalized model for each user is troublesome. In this paper, we propose a universal recurrent neural network language model with user characteristic features, so all users share the same model, except each with different user characteristic features. These user characteristic features can be obtained by crowdsouring over social networks, which include huge quantity of texts posted by users with known friend relationships, who may share some subject topics and wording patterns. The preliminary experiments on Facebook corpus showed that this proposed approach not only drastically reduced the model perplexity, but offered very good improvement in recognition accuracy in n-best rescoring tests. This approach also mitigated the data sparseness problem for personalized language models. 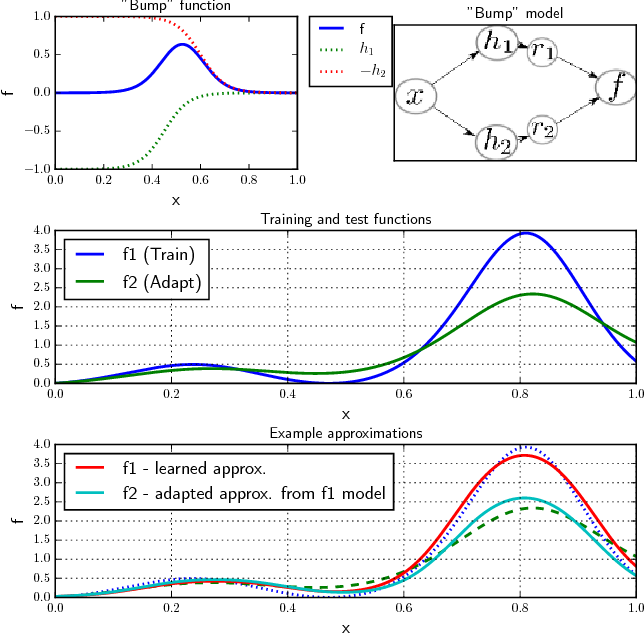 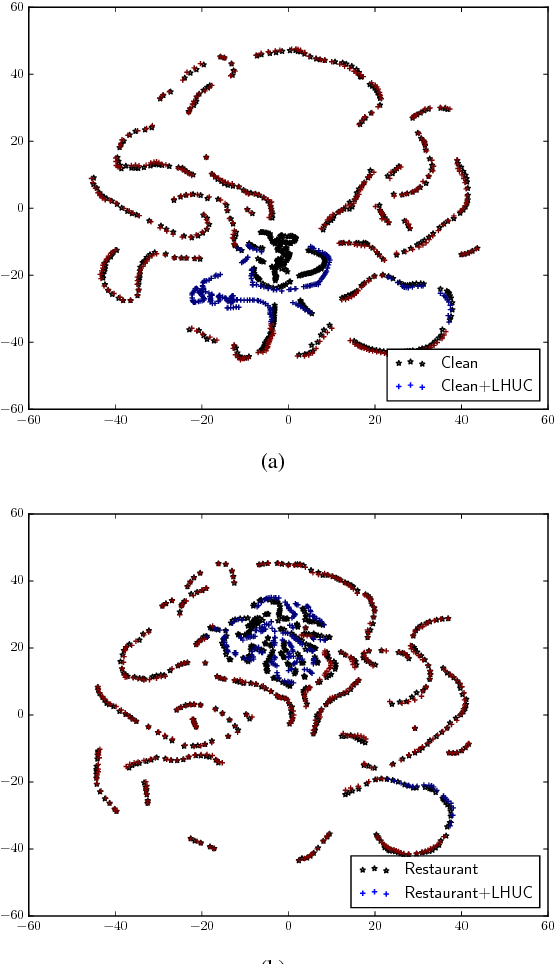 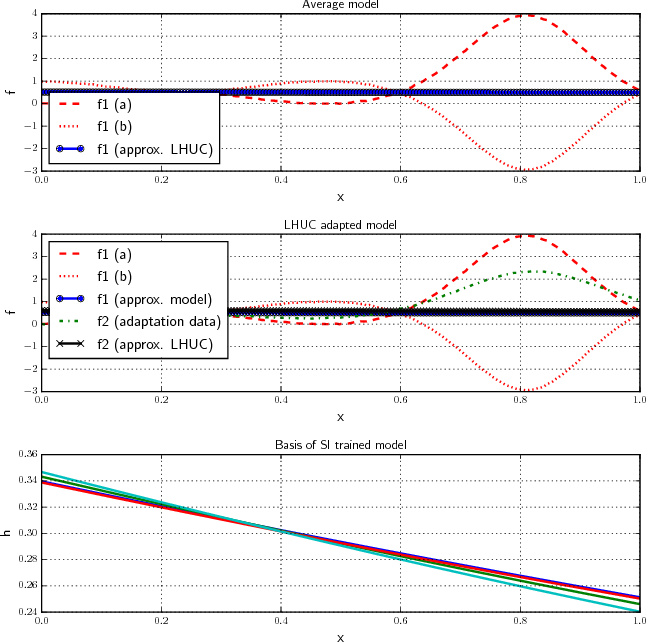 This work presents a broad study on the adaptation of neural network acoustic models by means of learning hidden unit contributions (LHUC) -- a method that linearly re-combines hidden units in a speaker- or environment-dependent manner using small amounts of unsupervised adaptation data. We also extend LHUC to a speaker adaptive training (SAT) framework that leads to a more adaptable DNN acoustic model, working both in a speaker-dependent and a speaker-independent manner, without the requirements to maintain auxiliary speaker-dependent feature extractors or to introduce significant speaker-dependent changes to the DNN structure. Through a series of experiments on four different speech recognition benchmarks (TED talks, Switchboard, AMI meetings, and Aurora4) comprising 270 test speakers, we show that LHUC in both its test-only and SAT variants results in consistent word error rate reductions ranging from 5% to 23% relative depending on the task and the degree of mismatch between training and test data. In addition, we have investigated the effect of the amount of adaptation data per speaker, the quality of unsupervised adaptation targets, the complementarity to other adaptation techniques, one-shot adaptation, and an extension to adapting DNNs trained in a sequence discriminative manner. 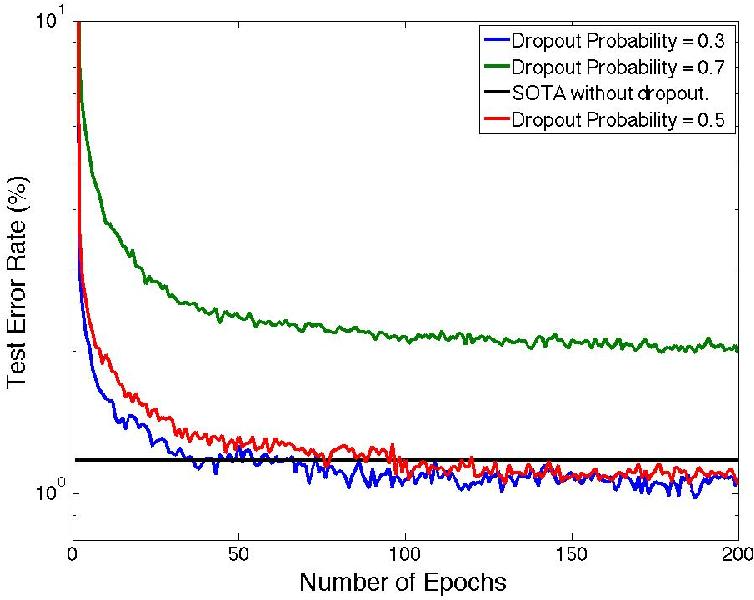 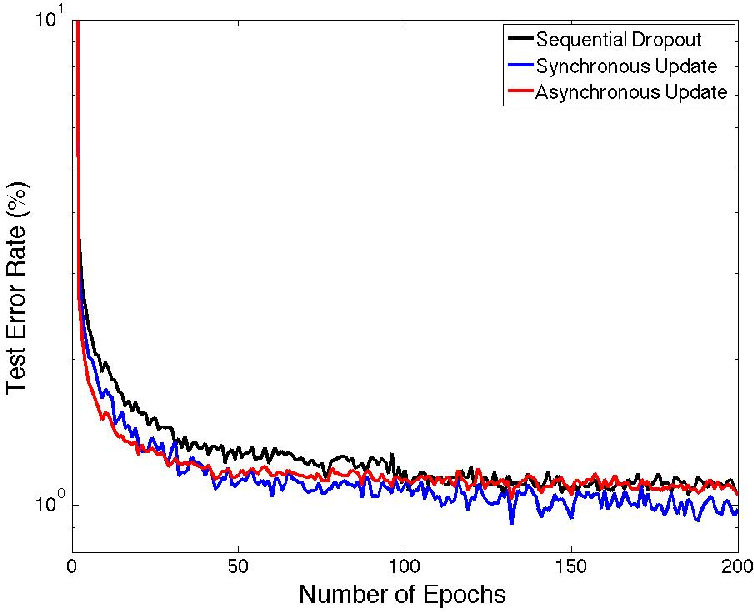 Deep learning methods have shown great promise in many practical applications, ranging from speech recognition, visual object recognition, to text processing. However, most of the current deep learning methods suffer from scalability problems for large-scale applications, forcing researchers or users to focus on small-scale problems with fewer parameters. In this paper, we consider a well-known machine learning model, deep belief networks (DBNs) that have yielded impressive classification performance on a large number of benchmark machine learning tasks. To scale up DBN, we propose an approach that can use the computing clusters in a distributed environment to train large models, while the dense matrix computations within a single machine are sped up using graphics processors (GPU). When training a DBN, each machine randomly drops out a portion of neurons in each hidden layer, for each training case, making the remaining neurons only learn to detect features that are generally helpful for producing the correct answer. Within our approach, we have developed four methods to combine outcomes from each machine to form a unified model. Our preliminary experiment on the mnst handwritten digit database demonstrates that our approach outperforms the state of the art test error rate. 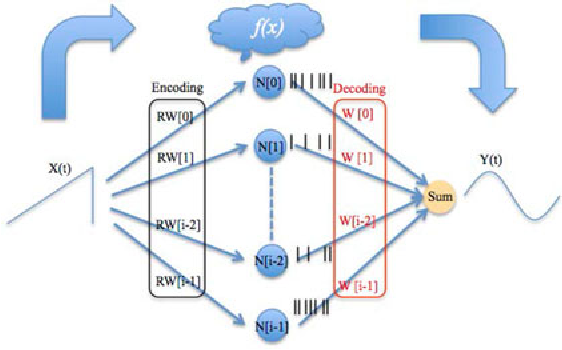 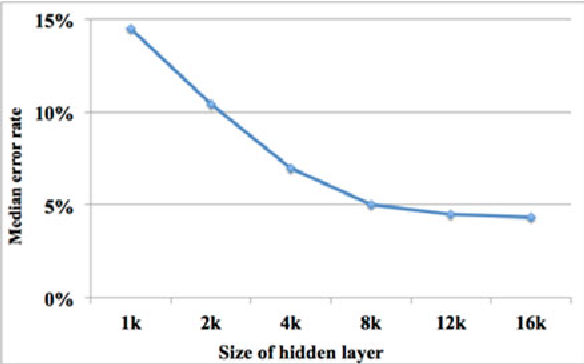 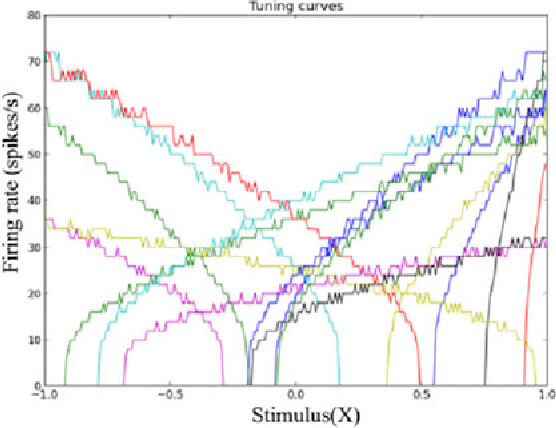 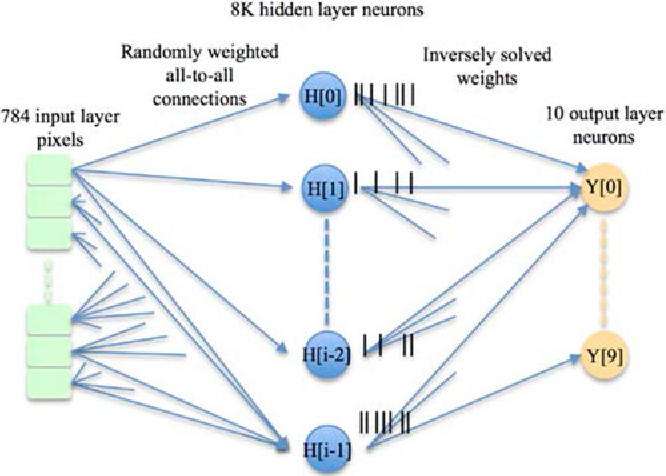 We present a hardware architecture that uses the Neural Engineering Framework (NEF) to implement large-scale neural networks on Field Programmable Gate Arrays (FPGAs) for performing pattern recognition in real time. NEF is a framework that is capable of synthesising large-scale cognitive systems from subnetworks. We will first present the architecture of the proposed neural network implemented using fixed-point numbers and demonstrate a routine that computes the decoding weights by using the online pseudoinverse update method (OPIUM) in a parallel and distributed manner. The proposed system is efficiently implemented on a compact digital neural core. This neural core consists of 64 neurons that are instantiated by a single physical neuron using a time-multiplexing approach. As a proof of concept, we combined 128 identical neural cores together to build a handwritten digit recognition system using the MNIST database and achieved a recognition rate of 96.55%. The system is implemented on a state-of-the-art FPGA and can process 5.12 million digits per second. The architecture is not limited to handwriting recognition, but is generally applicable as an extremely fast pattern recognition processor for various kinds of patterns such as speech and images.

A control strategy for expert systems is presented which is based on Shafer's Belief theory and the combination rule of Dempster. In contrast to well known strategies it is not sequentially and hypotheses-driven, but parallel and self organizing, determined by the concept of information gain. The information gain, calculated as the maximal difference between the actual evidence distribution in the knowledge base and the potential evidence determines each consultation step. Hierarchically structured knowledge is an important representation form and experts even use several hierarchies in parallel for constituting their knowledge. Hence the control strategy is applied to a layered set of distinct hierarchies. Depending on the actual data one of these hierarchies is chosen by the control strategy for the next step in the reasoning process. Provided the actual data are well matched to the structure of one hierarchy, this hierarchy remains selected for a longer consultation time. If no good match can be achieved, a switch from the actual hierarchy to a competing one will result, very similar to the phenomenon of restructuring in problem solving tasks. Up to now the control strategy is restricted to multi hierarchical knowledge bases with disjunct hierarchies. It is implemented in the expert system IBIG (inference by information gain), being presently applied to acquired speech disorders (aphasia). 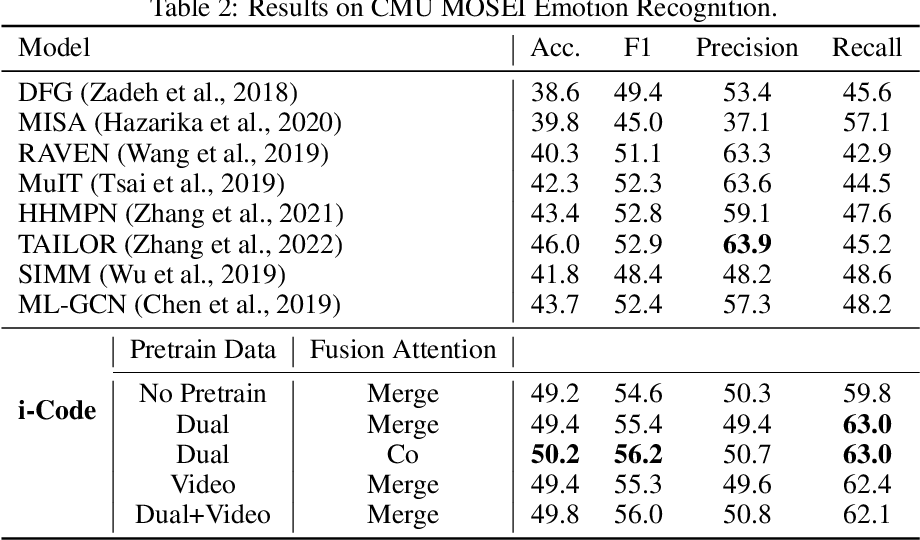 Human intelligence is multimodal; we integrate visual, linguistic, and acoustic signals to maintain a holistic worldview. Most current pretraining methods, however, are limited to one or two modalities. We present i-Code, a self-supervised pretraining framework where users may flexibly combine the modalities of vision, speech, and language into unified and general-purpose vector representations. In this framework, data from each modality are first given to pretrained single-modality encoders. The encoder outputs are then integrated with a multimodal fusion network, which uses novel attention mechanisms and other architectural innovations to effectively combine information from the different modalities. The entire system is pretrained end-to-end with new objectives including masked modality unit modeling and cross-modality contrastive learning. Unlike previous research using only video for pretraining, the i-Code framework can dynamically process single, dual, and triple-modality data during training and inference, flexibly projecting different combinations of modalities into a single representation space. Experimental results demonstrate how i-Code can outperform state-of-the-art techniques on five video understanding tasks and the GLUE NLP benchmark, improving by as much as 11% and demonstrating the power of integrative multimodal pretraining.

The release of tabular benchmarks, such as NAS-Bench-101 and NAS-Bench-201, has significantly lowered the computational overhead for conducting scientific research in neural architecture search (NAS). Although they have been widely adopted and used to tune real-world NAS algorithms, these benchmarks are limited to small search spaces and focus solely on image classification. Recently, several new NAS benchmarks have been introduced that cover significantly larger search spaces over a wide range of tasks, including object detection, speech recognition, and natural language processing. However, substantial differences among these NAS benchmarks have so far prevented their widespread adoption, limiting researchers to using just a few benchmarks. In this work, we present an in-depth analysis of popular NAS algorithms and performance prediction methods across 25 different combinations of search spaces and datasets, finding that many conclusions drawn from a few NAS benchmarks do not generalize to other benchmarks. To help remedy this problem, we introduce NAS-Bench-Suite, a comprehensive and extensible collection of NAS benchmarks, accessible through a unified interface, created with the aim to facilitate reproducible, generalizable, and rapid NAS research. Our code is available at https://github.com/automl/naslib.

We introduce two novel unsupervised (blind) source separation methods, which involve self-supervised training from single-channel two-source speech mixtures without any access to the ground truth source signals. Our first method employs permutation invariant training (PIT) to separate artificially-generated mixtures of the original mixtures back into the original mixtures, which we named mixture permutation invariant training (MixPIT). We found this challenging objective to be a valid proxy task for learning to separate the underlying sources. We improve upon this first method by creating mixtures of source estimates and employing PIT to separate these new mixtures in a cyclic fashion. We named this second method cyclic mixture permutation invariant training (MixCycle), where cyclic refers to the fact that we use the same model to produce artificial mixtures and to learn from them continuously. We show that MixPIT outperforms a common baseline (MixIT) on our small dataset (SC09Mix), and they have comparable performance on a standard dataset (LibriMix). Strikingly, we also show that MixCycle surpasses the performance of supervised PIT by being data-efficient, thanks to its inherent data augmentation mechanism. To the best of our knowledge, no other purely unsupervised method is able to match or exceed the performance of supervised training. 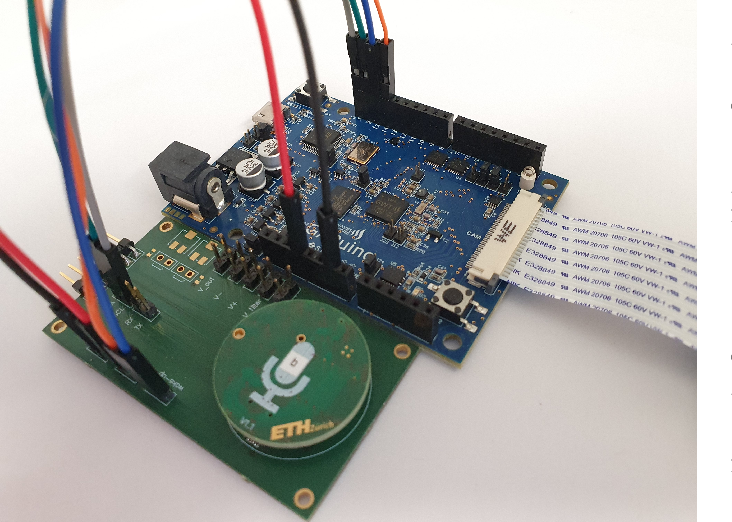 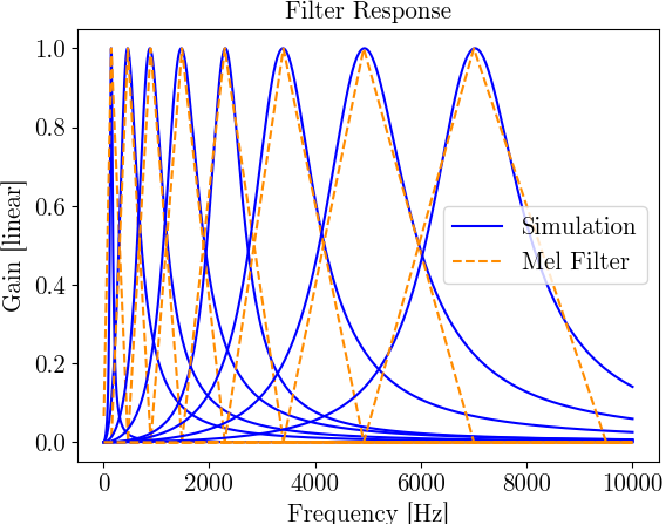 Keyword spotting (KWS) is a crucial function enabling the interaction with the many ubiquitous smart devices in our surroundings, either activating them through wake-word or directly as a human-computer interface. For many applications, KWS is the entry point for our interactions with the device and, thus, an always-on workload. Many smart devices are mobile and their battery lifetime is heavily impacted by continuously running services. KWS and similar always-on services are thus the focus when optimizing the overall power consumption. This work addresses KWS energy-efficiency on low-cost microcontroller units (MCUs). We combine analog binary feature extraction with binary neural networks. By replacing the digital preprocessing with the proposed analog front-end, we show that the energy required for data acquisition and preprocessing can be reduced by 29x, cutting its share from a dominating 85% to a mere 16% of the overall energy consumption for our reference KWS application. Experimental evaluations on the Speech Commands Dataset show that the proposed system outperforms state-of-the-art accuracy and energy efficiency, respectively, by 1% and 4.3x on a 10-class dataset while providing a compelling accuracy-energy trade-off including a 2% accuracy drop for a 71x energy reduction.