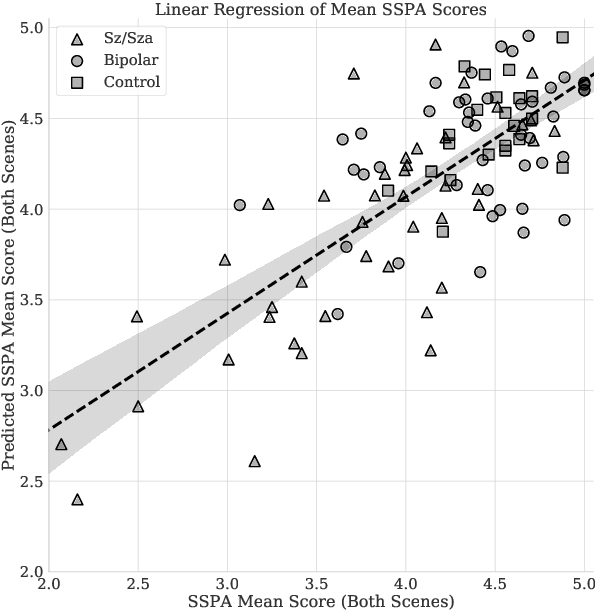 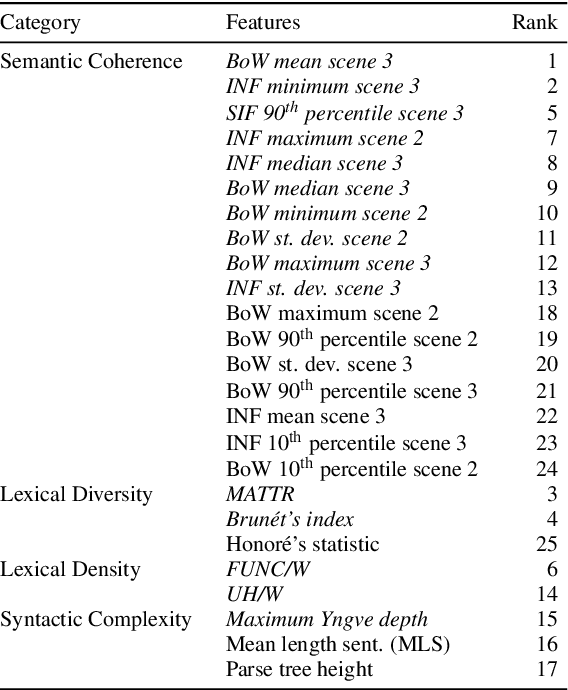 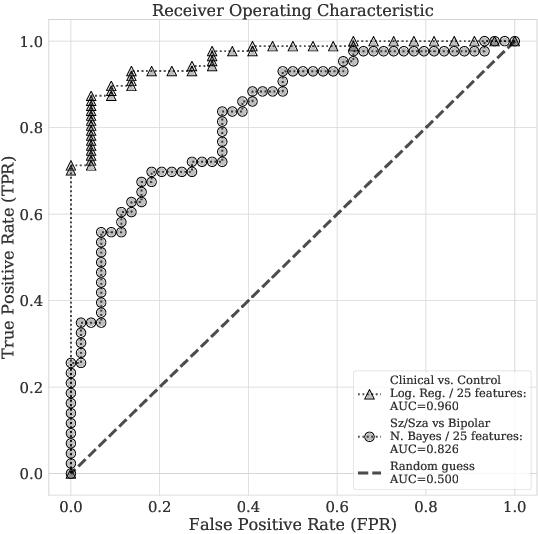 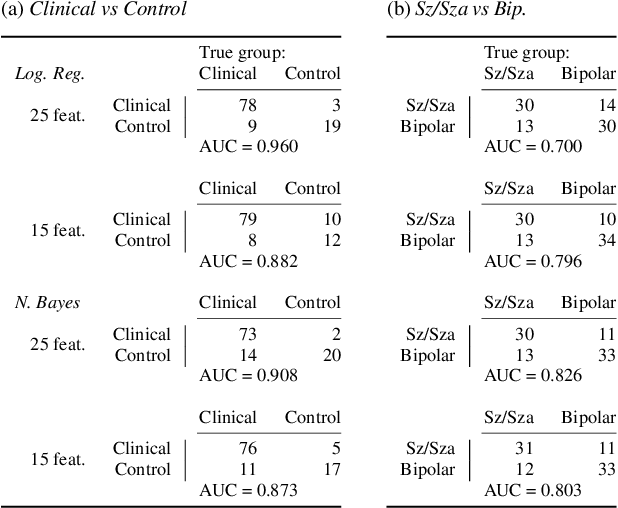 Several studies have shown that speech and language features, automatically extracted from clinical interviews or spontaneous discourse, have diagnostic value for mental disorders such as schizophrenia and bipolar disorder. They typically make use of a large feature set to train a classifier for distinguishing between two groups of interest, i.e. a clinical and control group. However, a purely data-driven approach runs the risk of overfitting to a particular data set, especially when sample sizes are limited. Here, we first down-select the set of language features to a small subset that is related to a well-validated test of functional ability, the Social Skills Performance Assessment (SSPA). This helps establish the concurrent validity of the selected features. We use only these features to train a simple classifier to distinguish between groups of interest. Linear regression reveals that a subset of language features can effectively model the SSPA, with a correlation coefficient of 0.75. Furthermore, the same feature set can be used to build a strong binary classifier to distinguish between healthy controls and a clinical group (AUC = 0.96) and also between patients within the clinical group with schizophrenia and bipolar I disorder (AUC = 0.83). 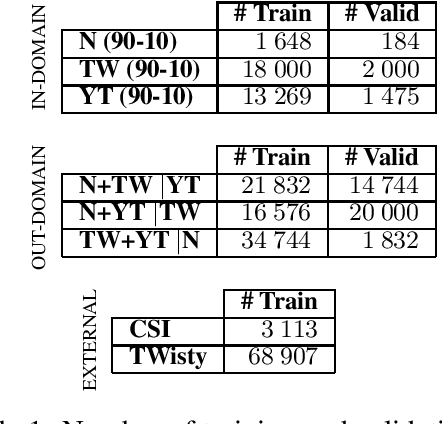 We present our system for the CLIN29 shared task on cross-genre gender detection for Dutch. We experimented with a multitude of neural models (CNN, RNN, LSTM, etc.), more "traditional" models (SVM, RF, LogReg, etc.), different feature sets as well as data pre-processing. The final results suggested that using tokenized, non-lowercased data works best for most of the neural models, while a combination of word clusters, character trigrams and word lists showed to be most beneficial for the majority of the more "traditional" (that is, non-neural) models, beating features used in previous tasks such as n-grams, character n-grams, part-of-speech tags and combinations thereof. In contradiction with the results described in previous comparable shared tasks, our neural models performed better than our best traditional approaches with our best feature set-up. Our final model consisted of a weighted ensemble model combining the top 25 models. Our final model won both the in-domain gender prediction task and the cross-genre challenge, achieving an average accuracy of 64.93% on the in-domain gender prediction task, and 56.26% on cross-genre gender prediction. 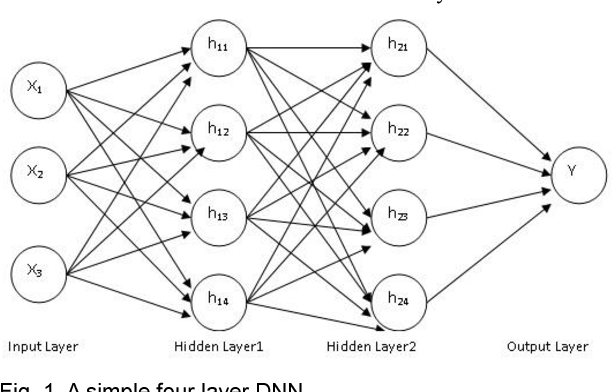 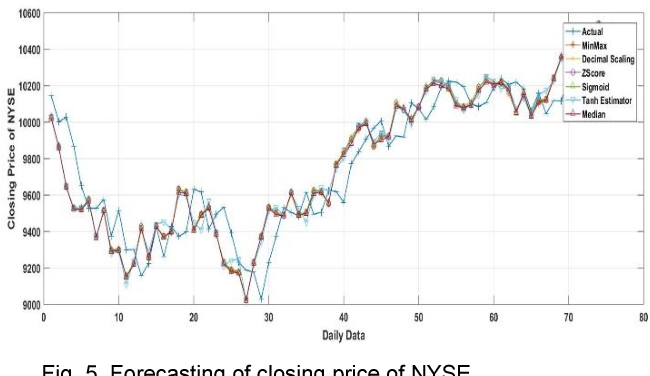 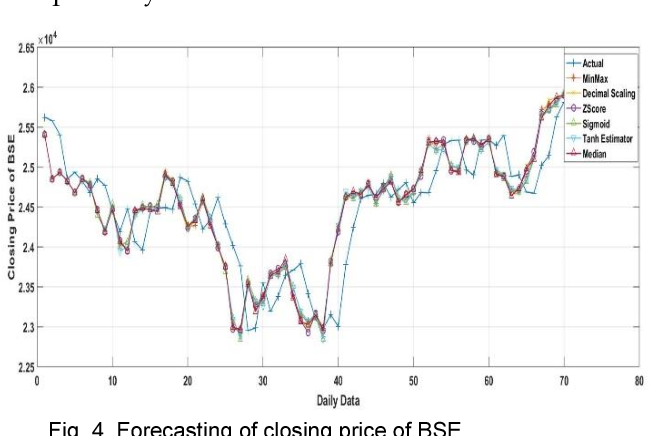 For the last few years it has been observed that the Deep Neural Networks (DNNs) has achieved an excellent success in image classification, speech recognition. But DNNs are suffer great deal of challenges for time series forecasting because most of the time series data are nonlinear in nature and highly dynamic in behaviour. The time series forecasting has a great impact on our socio-economic environment. Hence, to deal with these challenges its need to be redefined the DNN model and keeping this in mind, data pre-processing, network architecture and network parameters are need to be consider before feeding the data into DNN models. Data normalization is the basic data pre-processing technique form which learning is to be done. The effectiveness of time series forecasting is heavily depend on the data normalization technique. In this paper, different normalization methods are used on time series data before feeding the data into the DNN model and we try to find out the impact of each normalization technique on DNN to forecast the time series. Here the Deep Recurrent Neural Network (DRNN) is used to predict the closing index of Bombay Stock Exchange (BSE) and New York Stock Exchange (NYSE) by using BSE and NYSE time series data. 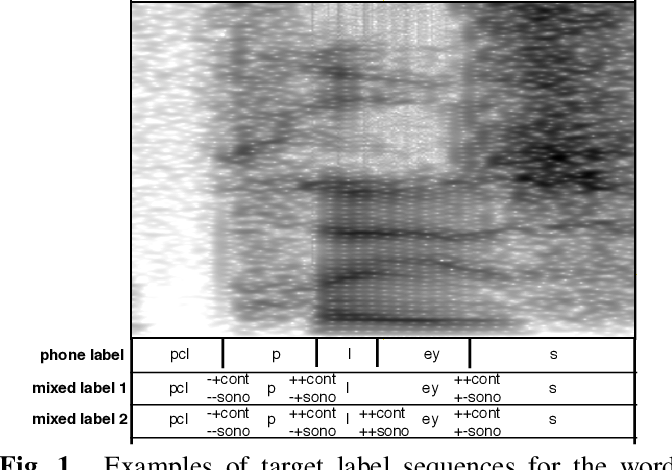 Connectionist temporal classification (CTC) training criterion provides an alternative acoustic model (AM) training strategy for automatic speech recognition in an end-to-end fashion. Although CTC criterion benefits acoustic modeling without needs of time-aligned phonetics transcription, it remains in need of efforts of tweaking to convergence, especially in the resource-constrained scenario. In this paper, we proposed to improve CTC training by incorporating acoustic landmarks. We tailored a new set of acoustic landmarks to help CTC training converge more quickly while also reducing recognition error rates. We leveraged new target label sequences mixed with both phone and manner changes to guide CTC training. Experiments on TIMIT demonstrated that CTC based acoustic models converge faster and smoother significantly when they are augmented by acoustic landmarks. The models pretrained with mixed target labels can be finetuned furthermore, which reduced phone error rate by 8.72% on TIMIT. The consistent performance gain is also observed on reduced TIMIT and WSJ as well, in which case, we are the first to succeed in testing the effectiveness of acoustic landmark theory on mid-sized ASR tasks. 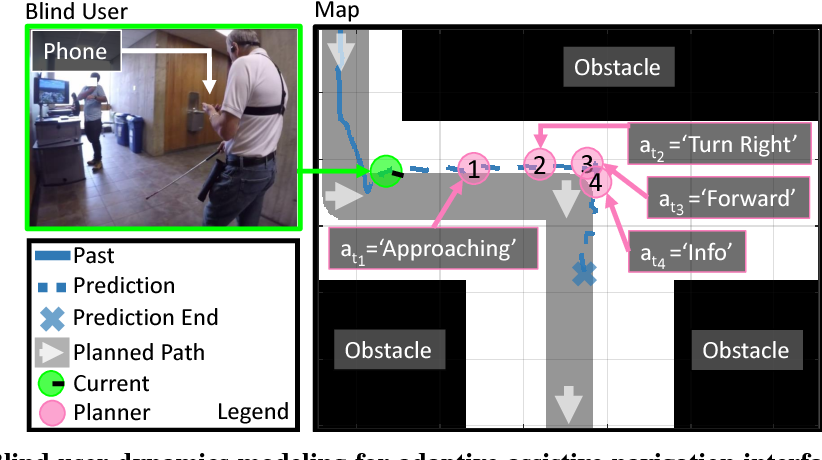 Consider an assistive system that guides visually impaired users through speech and haptic feedback to their destination. Existing robotic and ubiquitous navigation technologies (e.g., portable, ground, or wearable systems) often operate in a generic, user-agnostic manner. However, to minimize confusion and navigation errors, our real-world analysis reveals a crucial need to adapt the instructional guidance across different end-users with diverse mobility skills. To address this practical issue in scalable system design, we propose a novel model-based reinforcement learning framework for personalizing the system-user interaction experience. When incrementally adapting the system to new users, we propose to use a weighted experts model for addressing data-efficiency limitations in transfer learning with deep models. A real-world dataset of navigation by blind users is used to show that the proposed approach allows for (1) more accurate long-term human behavior prediction (up to 20 seconds into the future) through improved reasoning over personal mobility characteristics, interaction with surrounding obstacles, and the current navigation goal, and (2) quick adaptation at the onset of learning, when data is limited. 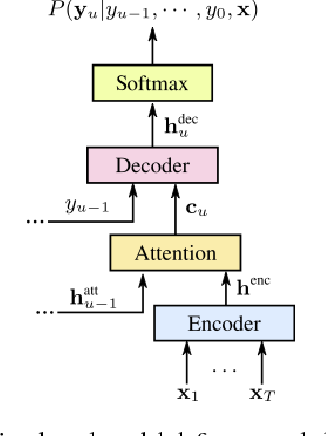 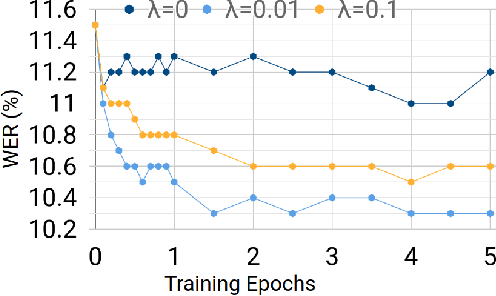 Sequence-to-sequence models, such as attention-based models in automatic speech recognition (ASR), are typically trained to optimize the cross-entropy criterion which corresponds to improving the log-likelihood of the data. However, system performance is usually measured in terms of word error rate (WER), not log-likelihood. Traditional ASR systems benefit from discriminative sequence training which optimizes criteria such as the state-level minimum Bayes risk (sMBR) which are more closely related to WER. In the present work, we explore techniques to train attention-based models to directly minimize expected word error rate. We consider two loss functions which approximate the expected number of word errors: either by sampling from the model, or by using N-best lists of decoded hypotheses, which we find to be more effective than the sampling-based method. In experimental evaluations, we find that the proposed training procedure improves performance by up to 8.2% relative to the baseline system. This allows us to train grapheme-based, uni-directional attention-based models which match the performance of a traditional, state-of-the-art, discriminative sequence-trained system on a mobile voice-search task.

Building Part-of-Speech (POS) taggers for code-mixed Indian languages is a particularly challenging problem in computational linguistics due to a dearth of accurately annotated training corpora. ICON, as part of its NLP tools contest has organized this challenge as a shared task for the second consecutive year to improve the state-of-the-art. This paper describes the POS tagger built at Surukam to predict the coarse-grained and fine-grained POS tags for three language pairs - Bengali-English, Telugu-English and Hindi-English, with the text spanning three popular social media platforms - Facebook, WhatsApp and Twitter. We employed Conditional Random Fields as the sequence tagging algorithm and used a library called sklearn-crfsuite - a thin wrapper around CRFsuite for training our model. Among the features we used include - character n-grams, language information and patterns for emoji, number, punctuation and web-address. Our submissions in the constrained environment,i.e., without making any use of monolingual POS taggers or the like, obtained an overall average F1-score of 76.45%, which is comparable to the 2015 winning score of 76.79%.

A central goal of neuroscience is to understand how activity in the nervous system is related to features of the external world, or to features of the nervous system itself. A common approach is to model neural responses as a weighted combination of external features, or vice versa. The structure of the model weights can provide insight into neural representations. Often, neural input-output relationships are sparse, with only a few inputs contributing to the output. In part to account for such sparsity, structured regularizers are incorporated into model fitting optimization. However, by imposing priors, structured regularizers can make it difficult to interpret learned model parameters. Here, we investigate a simple, minimally structured model estimation method for accurate, unbiased estimation of sparse models based on Bootstrapped Adaptive Threshold Selection followed by ordinary least-squares refitting (BoATS). Through extensive numerical investigations, we show that this method often performs favorably compared to L1 and L2 regularizers. In particular, for a variety of model distributions and noise levels, BoATS more accurately recovers the parameters of sparse models, leading to more parsimonious explanations of outputs. Finally, we apply this method to the task of decoding human speech production from ECoG recordings.

We define the relevant information in a signal $x\in X$ as being the information that this signal provides about another signal $y\in \Y$. Examples include the information that face images provide about the names of the people portrayed, or the information that speech sounds provide about the words spoken. Understanding the signal $x$ requires more than just predicting $y$, it also requires specifying which features of $\X$ play a role in the prediction. We formalize this problem as that of finding a short code for $\X$ that preserves the maximum information about $\Y$. That is, we squeeze the information that $\X$ provides about $\Y$ through a `bottleneck' formed by a limited set of codewords $\tX$. This constrained optimization problem can be seen as a generalization of rate distortion theory in which the distortion measure $d(x,\x)$ emerges from the joint statistics of $\X$ and $\Y$. This approach yields an exact set of self consistent equations for the coding rules $X \to \tX$ and $\tX \to \Y$. Solutions to these equations can be found by a convergent re-estimation method that generalizes the Blahut-Arimoto algorithm. Our variational principle provides a surprisingly rich framework for discussing a variety of problems in signal processing and learning, as will be described in detail elsewhere.